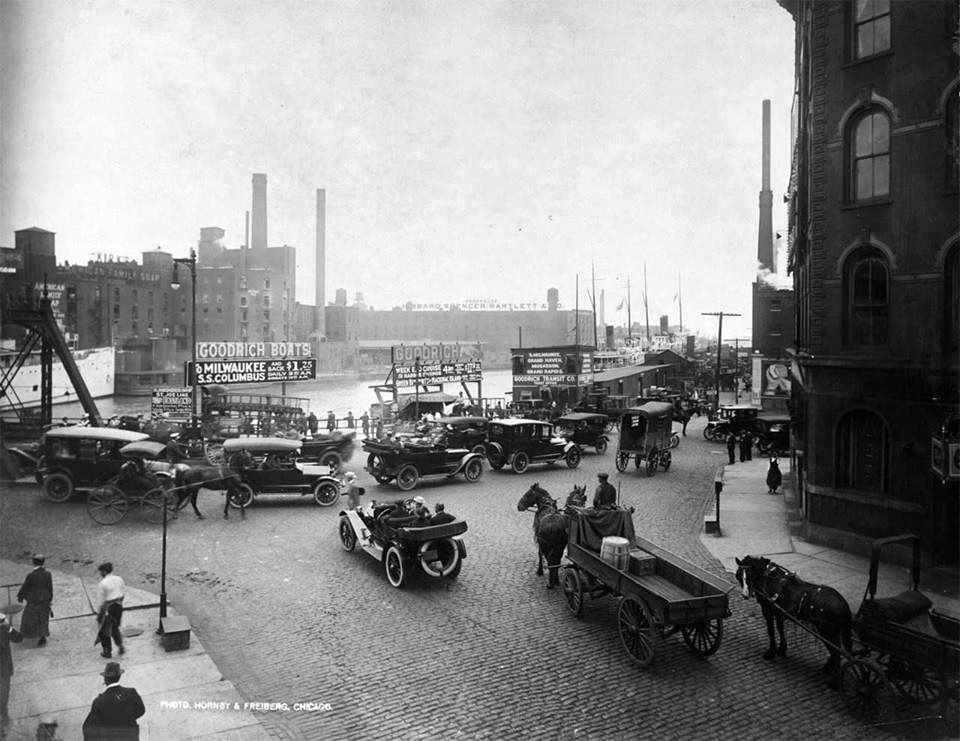 During the mid 1700s, the Chicago area was inhabited primarily by Potawatomis, who took the place of the Miami and Sauk and Fox who had controlled the area previously. The name Chicago originates from “Checagou” (Chick-Ah-Goo-Ah) or “Checaguar” which in the Potawatomi language means ‘wild onions’ or ‘skunk’. The area was so named because of the smell of rotting marshland onions that used to cover it.

Due to the geography of Chicago, early citizens faced many problems. The prairie bog nature of the area provided a fertile ground for disease-carrying insects. Early on, Chicago’s population and commerce growth was stymied by lack of good transportation infrastructure. History shows that this problem was soon remedied. During spring Chicago was so muddy from the high water that horses would be stuck, past their legs in the street. It was dependent largely upon a few dirt roads so bottomless and hazardous much of the time that one of them — marked by broken wheels, wrecks of wagons, and the bones of dead horses — was called the Slough of Despond. Comical signs proclaiming “Fastest route to China” or “No Bottom Here” were placed out to warn people of the mud.

To address these transportation problems, the board of Cook County commissioners, decided to improve two country roads toward the West and Southwest. The first road went west, crossing the “dismal Nine-mile Swamp,” crossed the Des Plaines River , and went southwest to Walker’s Grove, now known as Plainfield. There is a dispute about the route of the second road to the South.

Eventually, the City Council voted to raise the grade of her streets.

The Congress Street Superhighway and West Side Subway will be constructed together at tremendous savings to the people of Chicago.