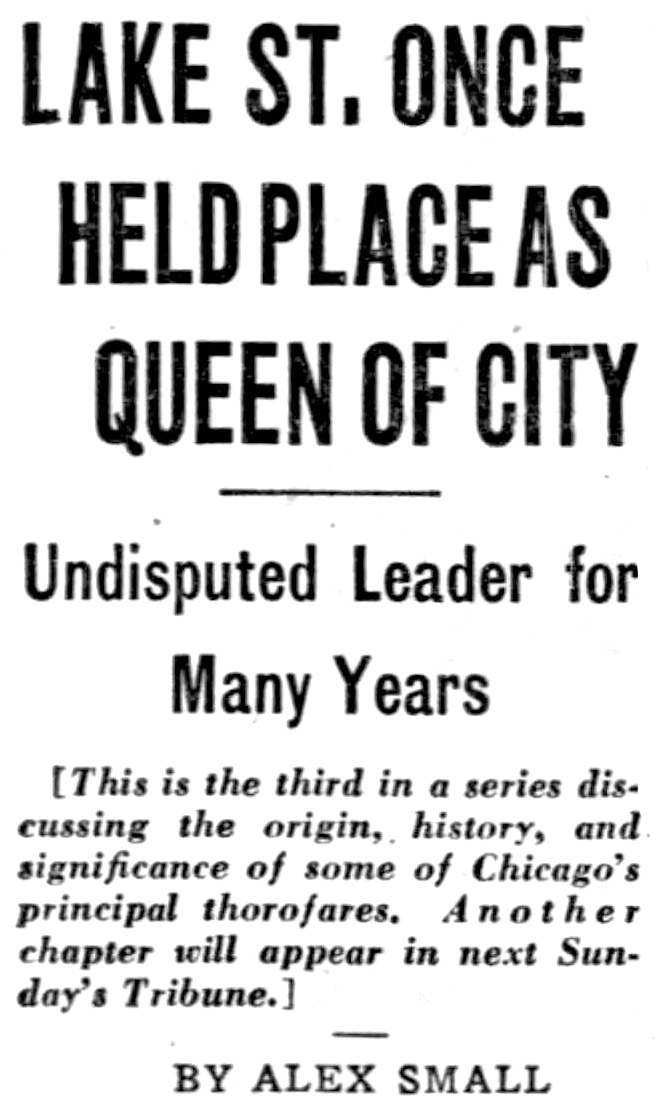 Many streets in Chicago have fallen from a once high estate, but none more so than Lake st. No one who sees it today, with its warehouses overshadowed by the elevated railway of the Loop, would suspect that it once was the queen of the city, and was not deposed from its leadership until after the 1871 fire?

Relatively, Lake st. was far more important in early Chicago than Michigan av. is in the Chicago of today. It can boast of having had Chicago’s first church, packing plant, tavern, hotel, and public market. In 1833 the first Catholic church was built on the northwest corner of Lake and State sts.

First Three Story Building,
In 1834 Mark Beaubien’s Sauganash hotel opened at the corner of Market st. Soon thereafter Chicago had its first three story structure, the Saloon building, at Lake and Clark sts. On another corner at Clark st. was the First Presbyterian church. The Tribune’s first offices were on Lake st. at the corner of La Salle st.

The first circus which came to Chicago pitched its tents in the fields at Lake st., on the spot which in the future would be the corner of Wabash av. At the corner of Lake and Canal sts. stood the Green Tree tavern, with refreshment for man and beast. It remained there until 1880. In the first three years of Chicago’s existence a liquid called whisky sometimes sold as cheap as 20 cents a gallon. Its price rose speedily. 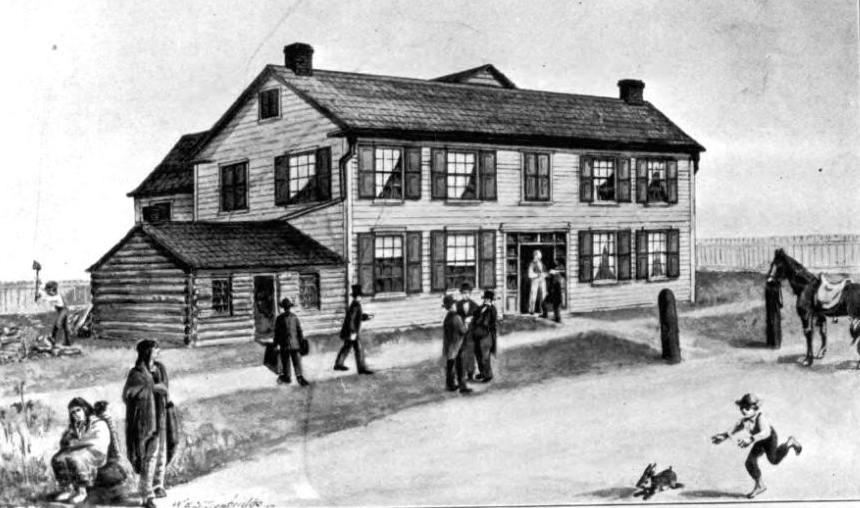 Planked Roads Introduced.
The Green Tree tavern was the last stop on the way out to the wilds along the Lake st. turnpike. After 1848 this turnpike, along with Lake st. itself, was planked. Planking roads was an innovation from the New World from Russia by Lord Sydenham, a governor general of Canada.

It proved immensely profitable, sometimes paying dividends of 40 per cent, to those who invested in it in the Chicago region. Travelers out to the middle west complained that tolls on the planked roads here were much higher than in the east.

Planking remedies the horrible traveling conditions of the time for a limited period only. The planks along Lake st. rotted, and once more drays sank into the mud over their axles. Presently people were saying planked streets were worse than those with no paving at all.

Jokers Put Up Signs.
At the worst spots along Lake st. local wits put up signs: “No Bottom here,” and “Shortest Road to Chimna.” A friendly citizen—so ran a story of the time—extended a helping hand to a traveler who was stuck in the Lake st. mud up to his chest.

“Than you, but I’m not worried.” The traveler answered “You see, I have a wagon under me.”

The most important historic event associated with Lake st. was beyond doubt the nomination of Abraham Lincoln for the Presidency, which occurred on May 18, 1860, in the Wigwam, a hall seating 10,000, at the corner of Market st.

The 1850s were the decade of Lake street’s greatest glory. Its chief ornament then was the Tremont house, on the southwest corner of Dearborn st. Five stories high and with 204 rooms, this hotel claimed to be the equal of any in the country, not excepting the much vaunted Revere house in Boston. 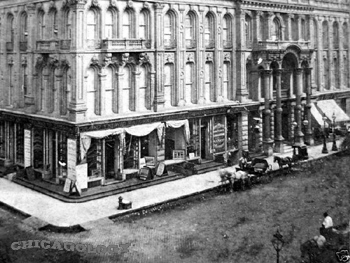 The Tremont house, which was built in 1850, and stood on Lake st. at Dearborn st.

All Buildings Raised.
When it was finally recognized that halfway measures would neither give Chicago an efficient sewer system nor protect it from the vagaries of the Chicago river, the authorities decided that every building in the city would have to be raised five or six feet above its then level, and the whole surface filled in. This feat was among the most daring and spectacular in the whole history of city building anywhere. Its crowning stunt was jacking the Tremont House five feet up in the air without breaking a single window.

This was in 1857. In spite of the improvement, or perhaps because of it, began a slow decline which was completed by the great fire of 1871. Attempts were made to restore to it some of its former prestige, but with the construction of the elevated railway Lake st. seemed to give up the struggle. 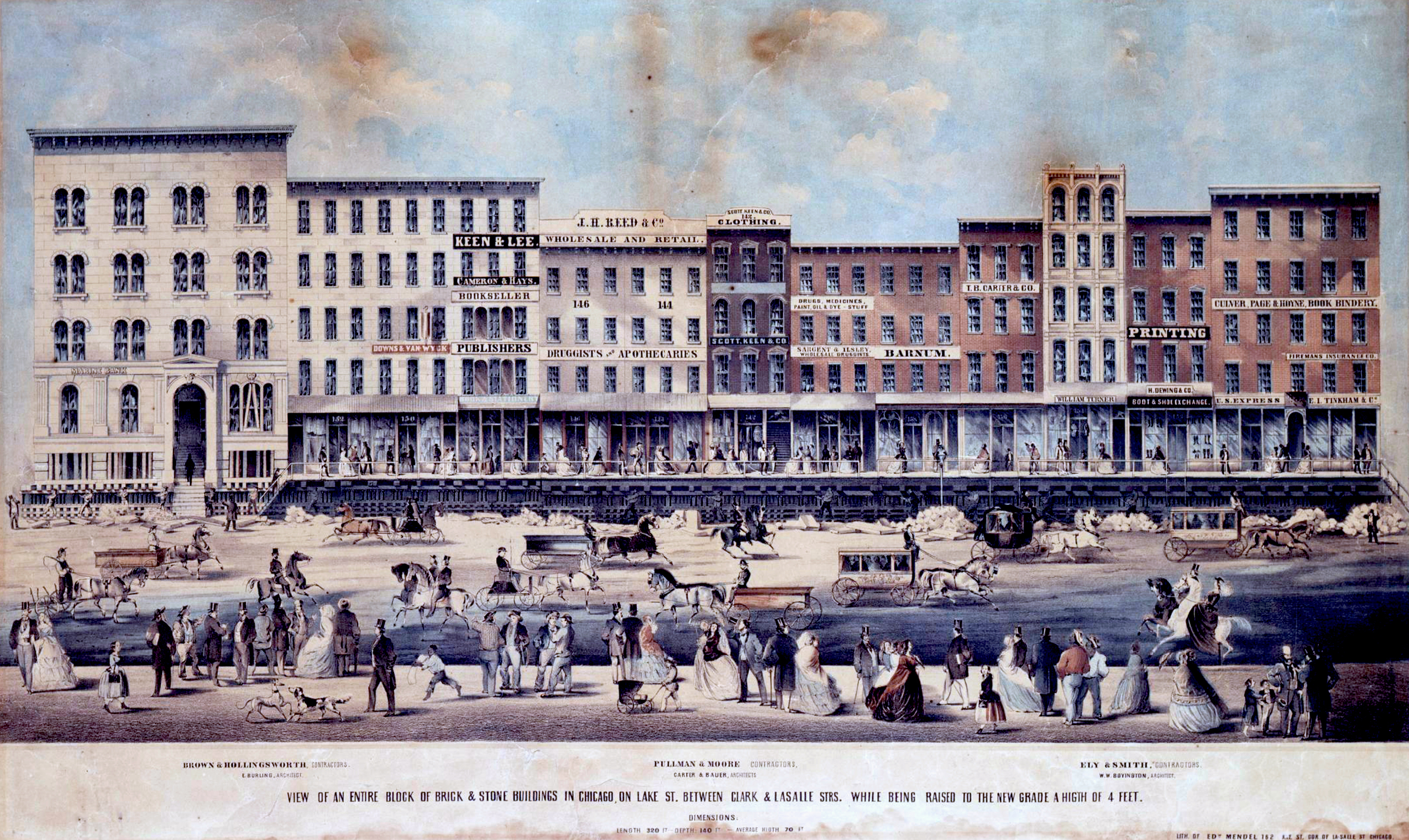