The Kennedy was originally constructed along the route of Avondale Avenue, an existing diagonal street, and the northwest railroad corridor, in the late 1950s and completed on November 5, 1960. Originally named the Northwest Expressway for its general direction of travel, the Chicago City Council voted unanimously on November 29, 1963—one week after the assassination of President Kennedy—to rename the highway the John F. Kennedy Expressway.

Experts for the board of local improvements will start work today on a survey and cost estimate of Chicago’s proposed new super driveway twelve miles long, linking Wacker drive in a straight, diagonal line with the northwest city limits.

The survey was ordered yesterday Rydzewski, acting president of the board, following a public hearing at which a petition, with 2,000 names, asking for the improvement was presented by a delegation of northwest side residents.

Avondale avenue paralleling the Chicago and North Western tracks is conceded as the best route for the boulevard, although there are varied plans for its development. All of them will be investigated in the survey. 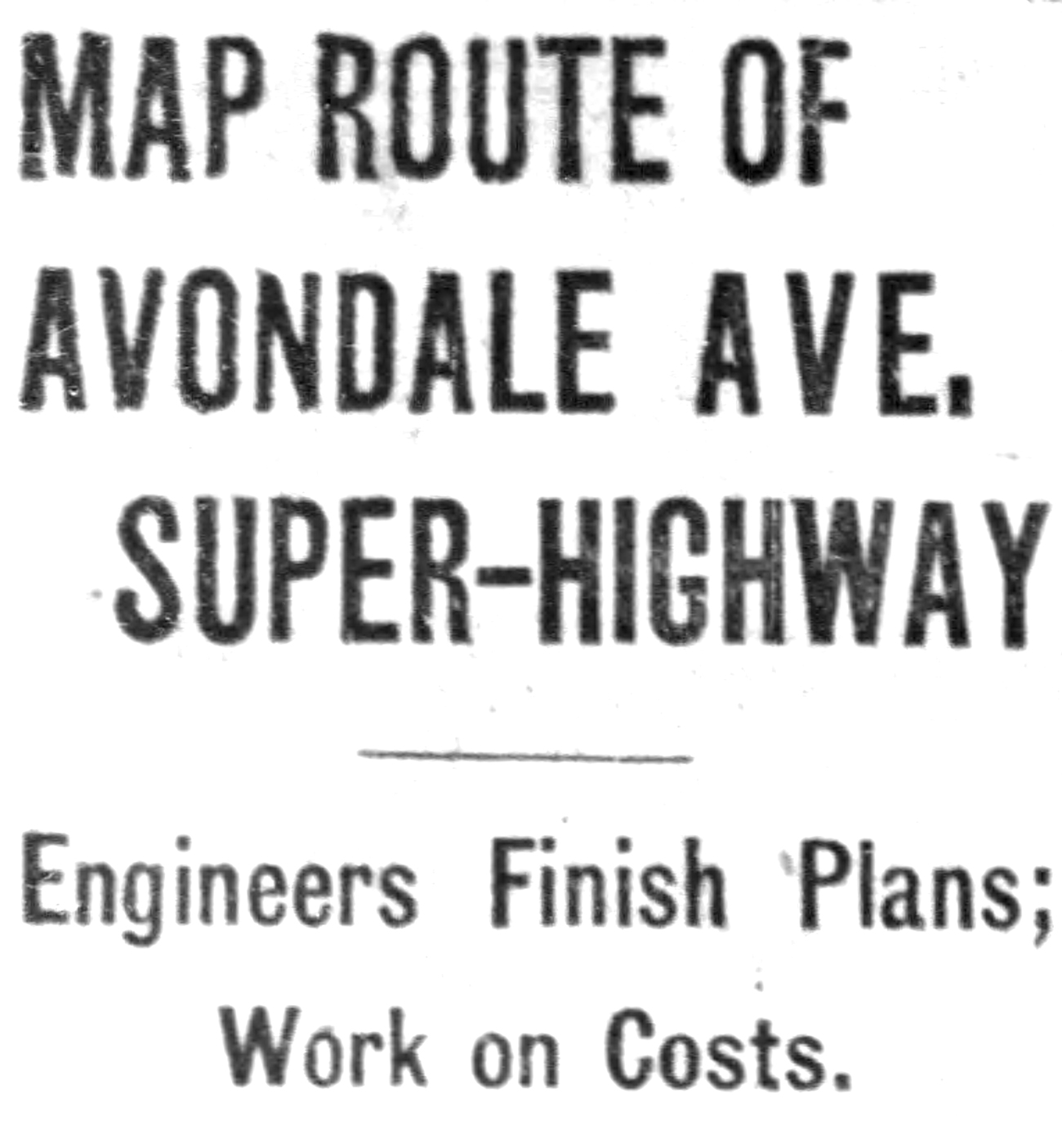 Engineers of the Chicago plan commission and board of local Improvements reported yesterday that base maps of the elevated super-highway; proposed to be built from Canal street and Wacker drive north-west along the grade of the North Western railroad to connect with county and state arteries at the Milwaukee avenue gateway, have been completed.

Forces under Hugh Young, chief engineer for the plan commission, are now busy studying the route of the new highway in detail and expect to have a report ready for action In October.

Need Time for Details.
Considerable study is necessary before we can make a recommendation on the exact route this great through traffic artery should follow, although in general it will utilize the North Western railroad grade with side street traffic entrances reaching it from the lower level cross streets at intervals of approximately one mile,” Mr. Young declared.

“We are now studying street widths in order to map out these entrances. Estimates of cost will then be made up and presented to the special Avondale avenue committee of the plan commission, which will pass final judgment and submit the entire project to the board of local improvements and city council.”

Members of Committee.
The Avondale avenue committee ot the plan commission includes Joseph R. Noel, chairman; Benjamin B. Felix, who first suggested the elevated highway, B. A. Eckhart, Murray McLeod, and Warner A. Wleboldt. Both M. J. Faherty, president of the board of local improvements, and James Simpson, chairman of the Chicago plan commission, have given their entire approval to the Avondale project and members of the city council finance committee is already considering the order providing for a bond measure to carry through the Improvement. 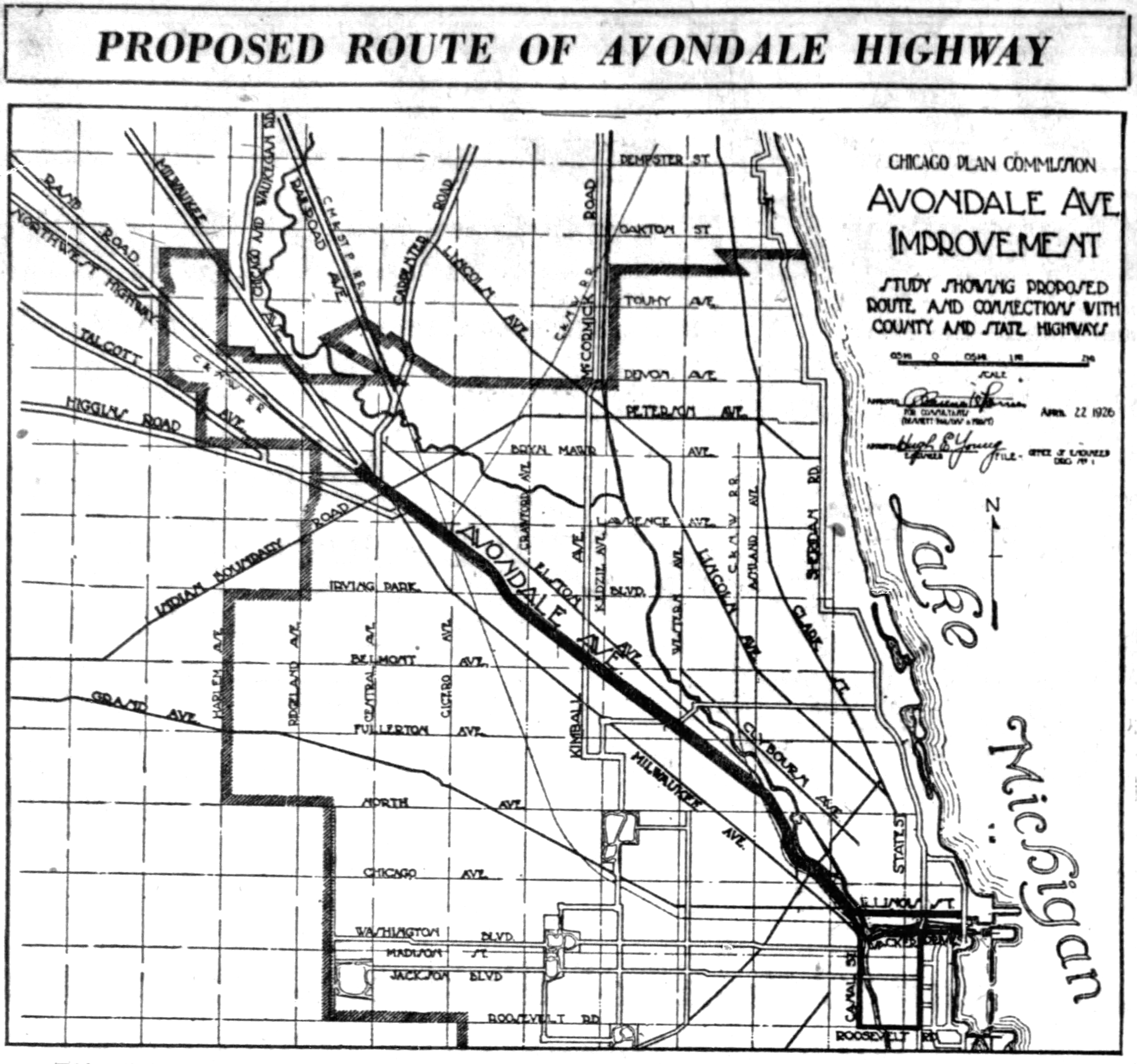 This official project map, issued by the Chicago plan commission, shows in detail traffic advantages motorists may expect from Chicago’s first elevated super highway, the Avondale avenue through traffic route, now in its last stages of promotion. The elevated road as projected will connect directly with Canal street and Wacker drive west of the river and with an elevated section of Illinois street north of the river. It will run northwest with and on the Northwestern railroad’s elevated grade to connect directly with eight of the main country highways which now pour their congestion of traffic into Milwaukee avenue. 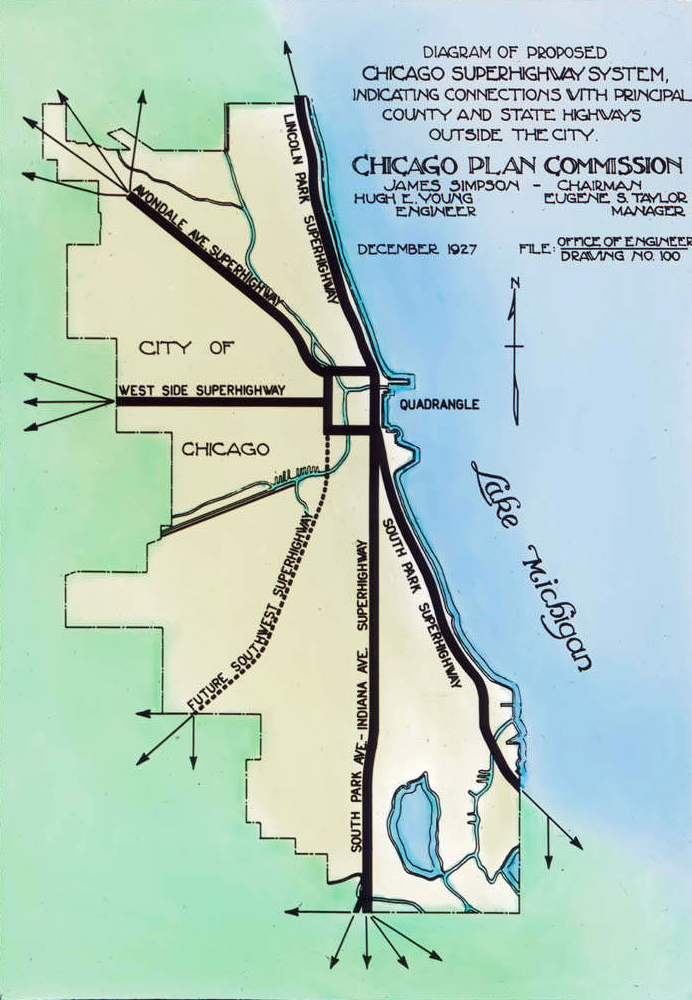 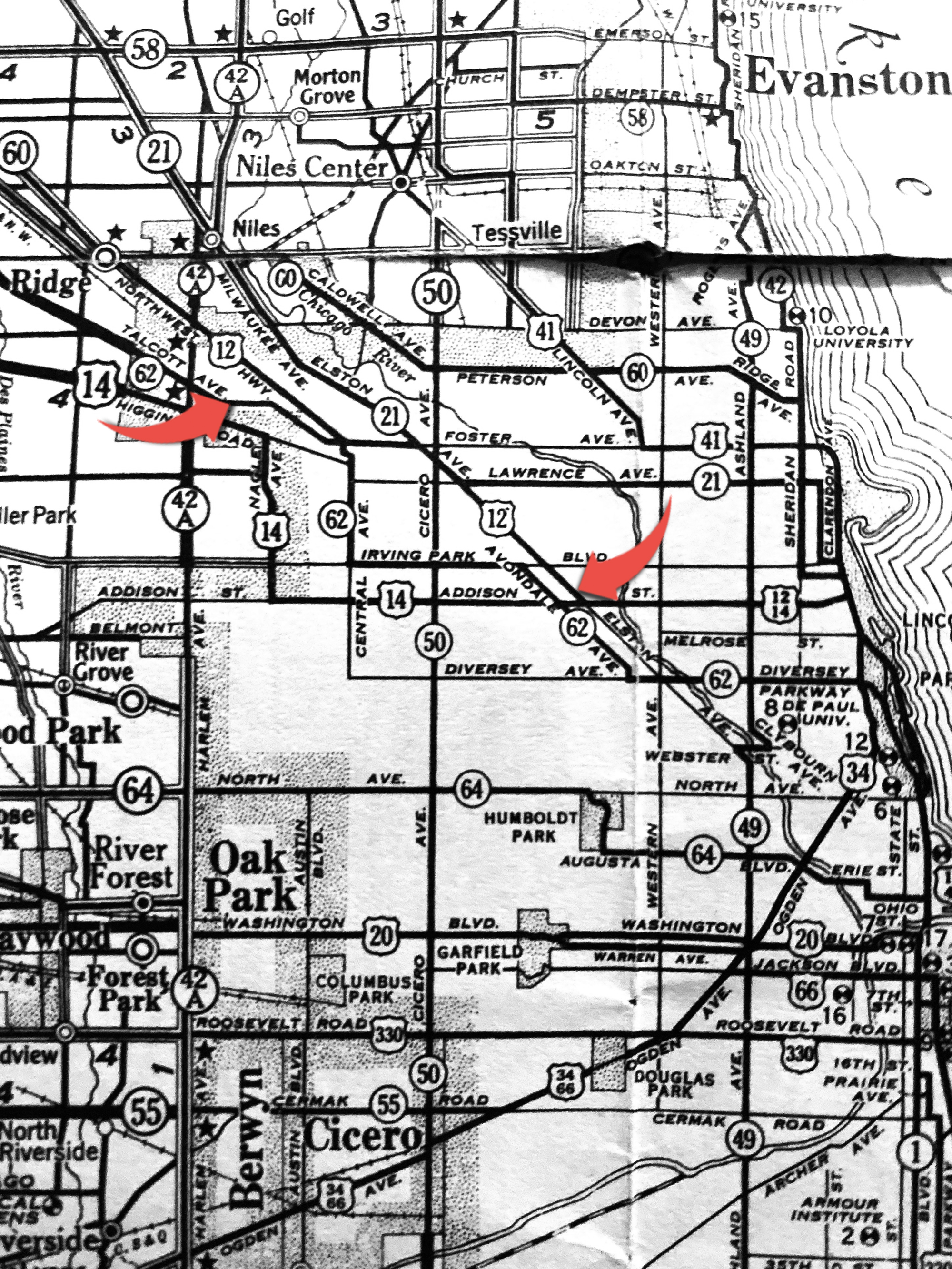 Avondale seems to have been connected to the Northwest Highway. The Kennedy Expressway followed the path of Avondale Road.

Chicago’s Accomplishments and Leaders, Compiled by Glenn A. Bishop, 1932 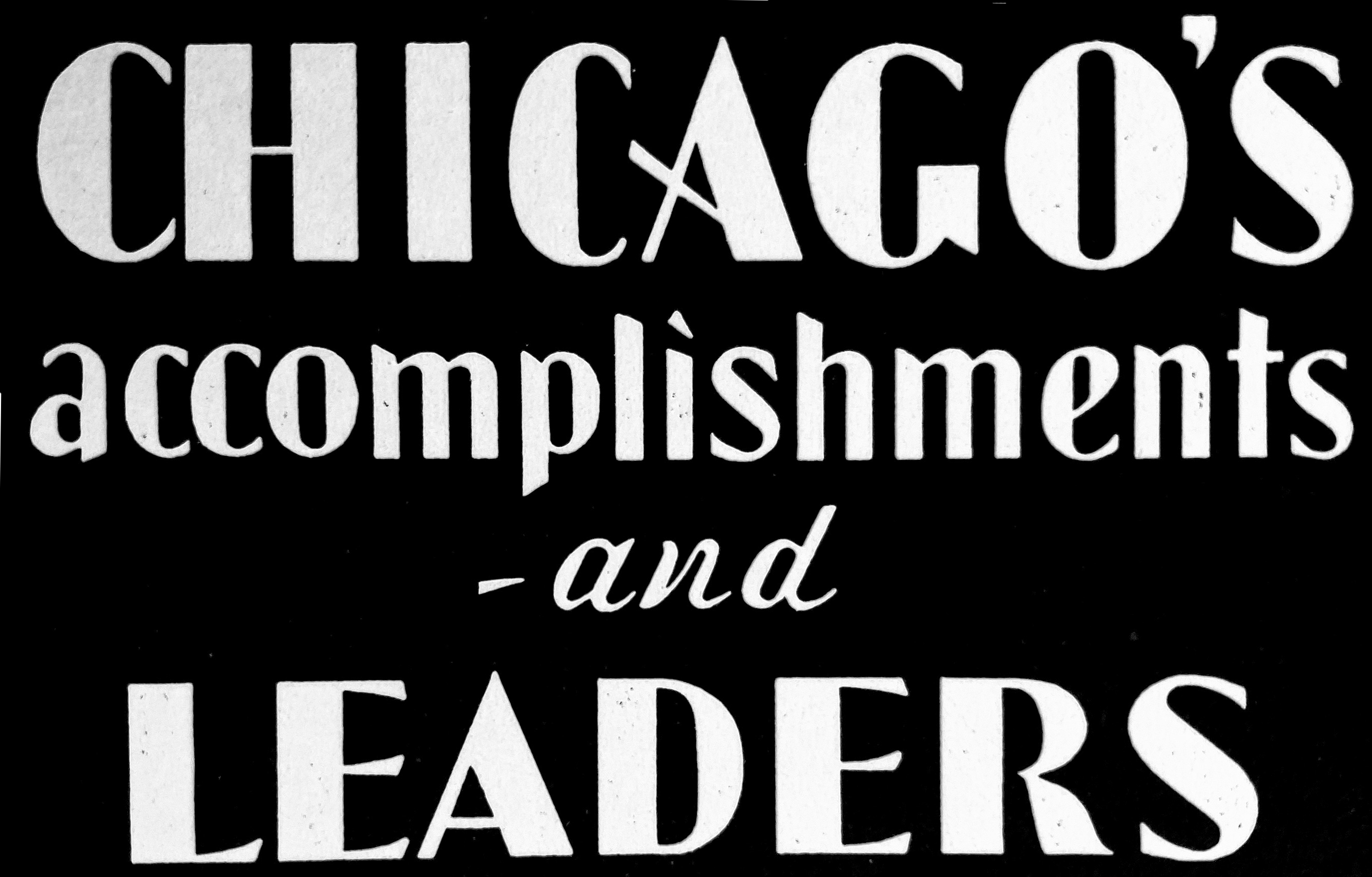 YEAR in and year out, for the past ten years at least, there have been nearly one thousand more automobiles added to Chicago’s total number of vehicles each and every week. Every day in the year almost a quarter of a million automobiles from outside the city enter Chicago and traverse its streets, most of them finding their way into the heart of the community.

No doubt the late depression has reduced the number of new automobiles added to Chicago’s total each week, but there is no letting up in the number of outside cars which find their way into the city. As a matter of fact, this number is constantly increasing with the improvement of state and county highways leading to and from Chicago. And with a return to normal conditions there is no reason to expect anything else than that the sale of new automobiles will likewise return to normal.

So we have a condition where more vehicles are continually being placed in service upon the streets of Chicago and where an ever larger number of vehicles are coming into the city every day. With this, in contrast, is the small amount of highway improvement within the municipal Limits which is going forward. As a result of its years of study of the traffic problems, the Chicago Plan Commission has reached the conclusion that the next necessary step toward providing relief from traffic over-congestion lies in the provision of a complete system of elevated, grade separation highways within Chicago, radiating out fan-shaped from the central business district and extending to the municipal limits on all sides, there making contact with the county, state and national improved highway systems.

So far only one route in this general system has been definitely recommended by the Chicago Plan Commission. That is the one known as Avondale Superhighway, which parallels the Chicago & Northwestern Railroad right-of-way for ten miles from Jefferson to the loop. At Jefferson it ends in the focal point of some ten or twelve major state and county highways, and in the loop it provides half a dozen connections with important north-and-south and east-and-west city streets. For nine miles of its ten mile length, the superhighway is planned to be 210 feet wide, consisting of an elevated exnress highway 160 feet wide, mainly built on solid fill like the adjacent railroad embankment, and in addition a local street, adjacent to the private property at the normal street level. Inclined roadways or ramps will connect the elevated express highway with Chicago’s normal street system at strategic intervals. The remaining mile does not provide this local, low-level roadway, because the express highway is to be built above the railroad tracks, which in this section are not elevated but lie on the normal surface of the ground. 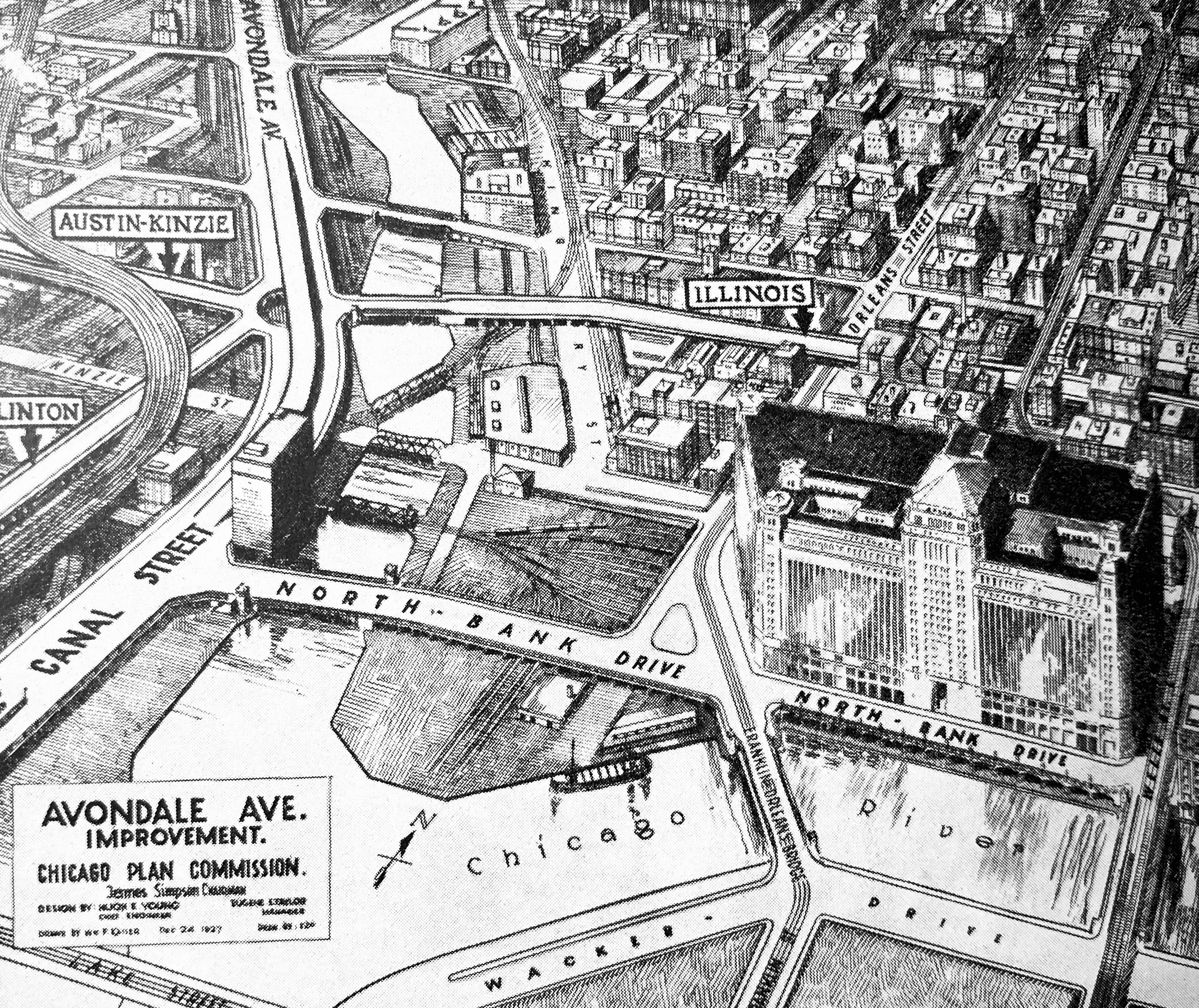 The first question which naturally arises in thinking of superhighways is: What conditions justify building an elevated street? The principal condition necessary, in my opinion, is an amount of traffic of such volume and character that the saving in time by eliminating delays due to cross traffic and turning traffic will justify the cost involved in the construction of the elevated thoroughfare. The average value of traffic has been estimated to be 2.2c per car minute. Having determined the approximate number of vehicles which can reasonably be expected to use an elevated highway daily, and having estimated the amount of time each vehicle will save by using the superhighway, multiplying the number of vehicles by the time saved and multiplying this again by 2.2c will give a fairly accurate idea of what amount can justifiably be spent for such an improvement.

Not only the volume but also the character of the traffic is important. It is obvious that in order to justify elevated grade-separation highway construction a large percentage of the traffic must be that which is ordinarily classed as “through-bound,” that is, that each vehicular trip will be of sufficient extent to justify the provision of a continuous and uninterrupted elevated right-of-way. Consequently, my opinion is that the main economic factor which justifies the construction of an elevated street is a large enough volume of long distance traffic to justify spending the amount of money the structure will cost in order to produce the benefits that will result. In other words, when the saving in time and distance—expressed in dollars—fully warrants the improvement from an economic viewpoint. Of course, the humanitarian factor is of great importance too, because grade-separation highways will not only naturally reduce automobile accidents by ehminating points of cross traffic movement but of even greater importance, the provision of separate routes for high speed traffic will eliminate all causes of accidents to pedestrians and children because pedestrians will not be permitted on the superhighways. 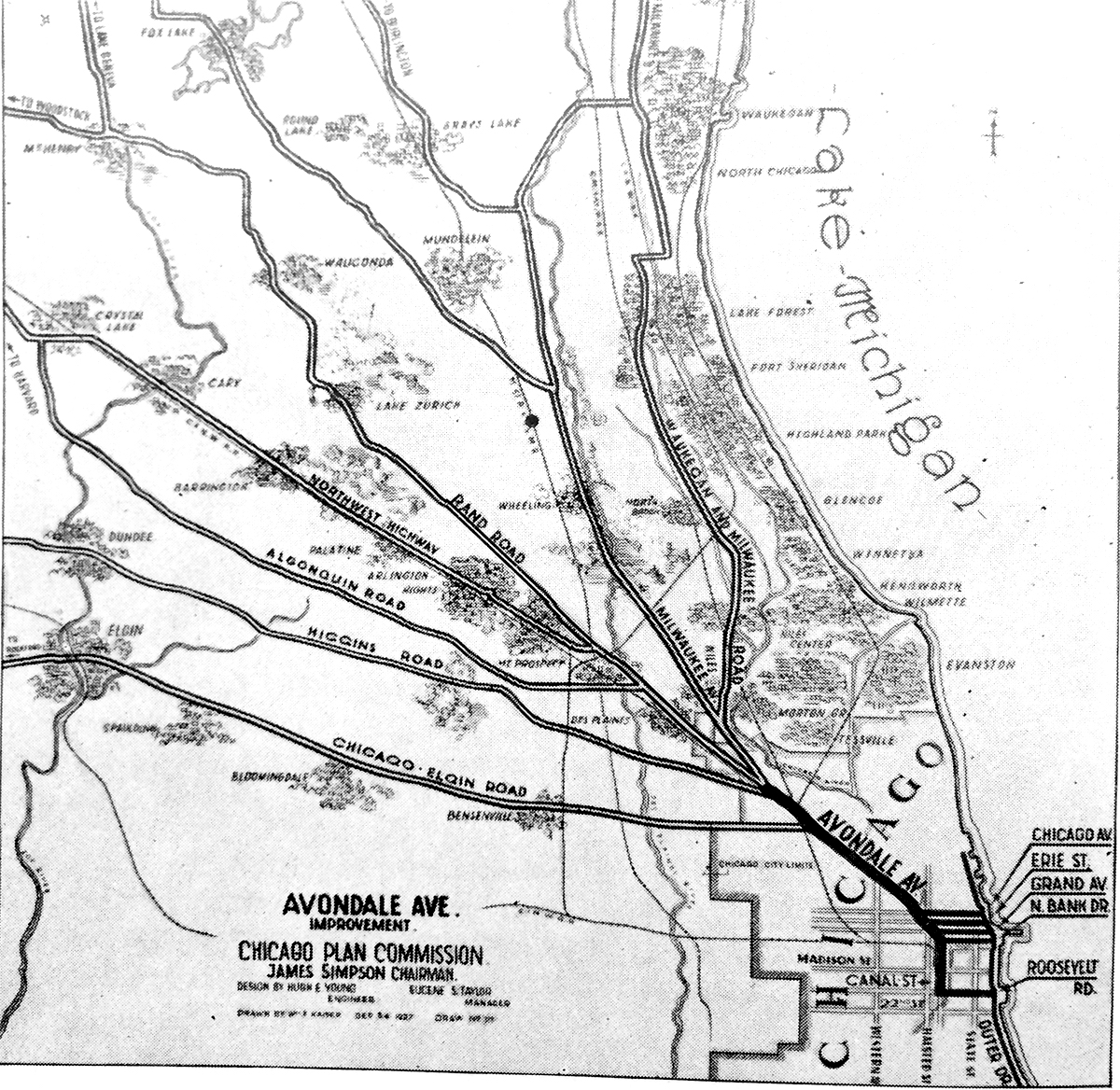 The second question which invariably arises is: What does an elevated superhighway cost per mile? This, of course, depends upon what kind of a superhighway it is, where it is located, how wide it is and other factors of construction involved. For example, the structure could consist of steel or concrete construction resting upon pile foundations, or it could consist of solid fill of the customary type of construction, which costs only about one-third as much as steel encased in concrete. Therefore, placing these superhighways along elevated steam railroad lines, and continuing the railroad embankment across the width of the elevated street to a concrete retaining wall will affect the cost both because of this type of construction and the proportion of solid fill there may be in each superhighway. In both types the steel and concrete construction is used wherever cross streets pass beneath the superhighway.

Upon two separate occasions the City of Chicago has endeavored to begin the construction of a superhighway. The first effort was in connection with the Avondale Superhighway for a start upon which a bond issue of $5,000,000 was placed upon the city ballot a few years ago. 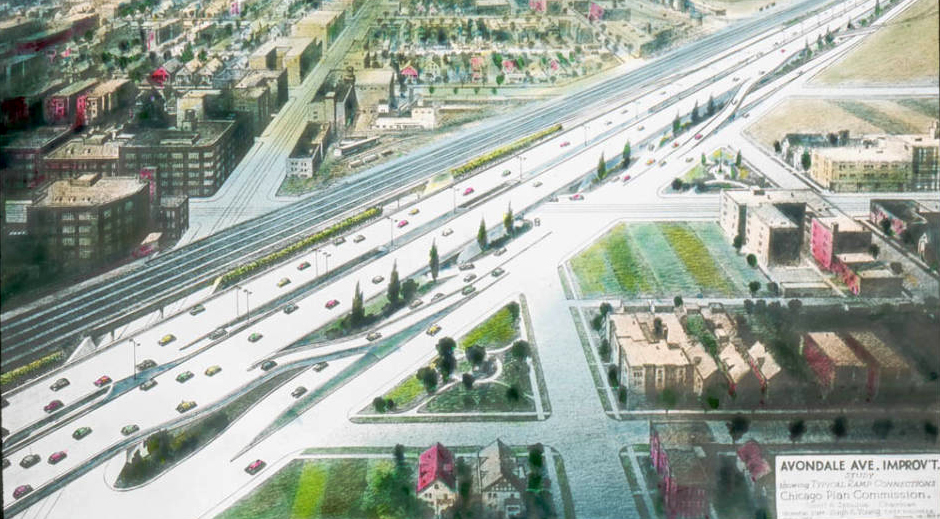 Subsequently the West Chicago Park Commissioners were desirous of creating an elevated boulevard extending through the west side. This route was known as the Austin-Kinzie route and a $20,000,000 bond issue was submitted in referendum to the voters of the West Park District.

Each of these attempts was defeated, but the fact remains that Chicago cannot forever continue to compel all its traffic to use the same narrow, inadequate, overcongested thoroughfares that were laid out in the days of our grandparents, when the city was only one-tenth of its present size, and when faithful old Dobbin was the only known motive power for street vehicles, long before modern automotive transportation methods were even dreamed of. The gradcseparation superhighway really originated in Chicago, and despite the fact that New York and other cities have appreciated the value of this idea and have actually put it into use by building elevated streets while Chicago has yet to make a start upon actual superhighway construction, yet I have every confidence that when Chicago fully awakes to the pressing need for separating local and through’bound vehicular traffic, it will carry out a comprehensive superhighway system with a speed that will amaze the rest of the country. 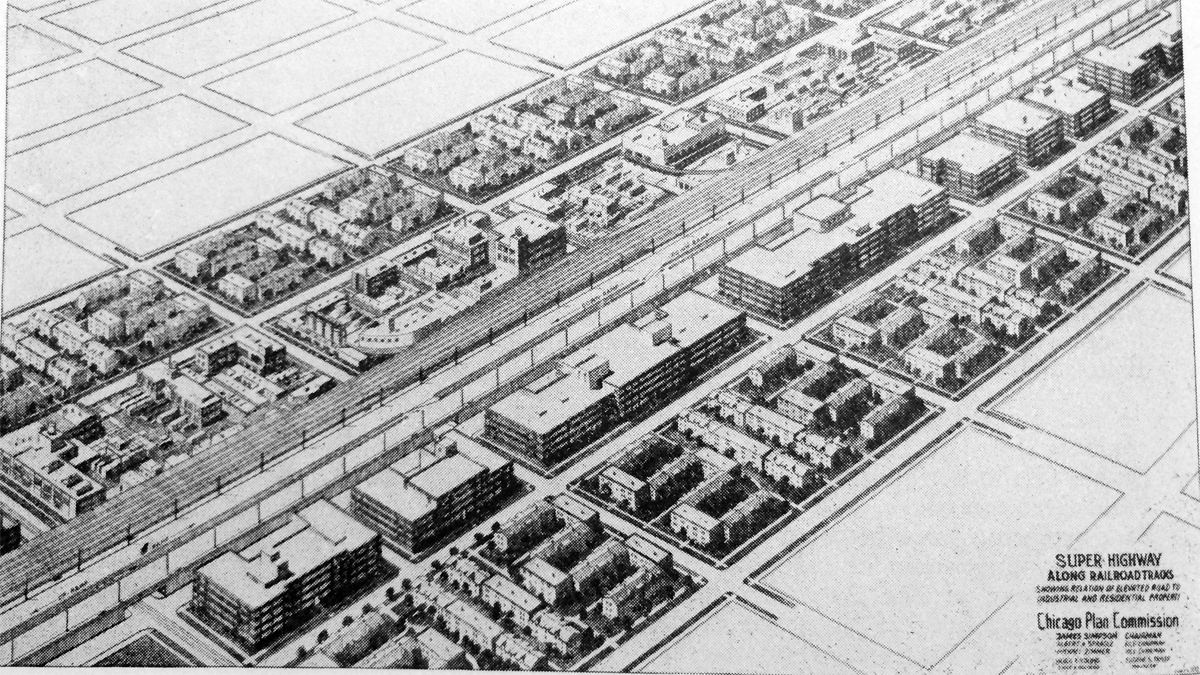 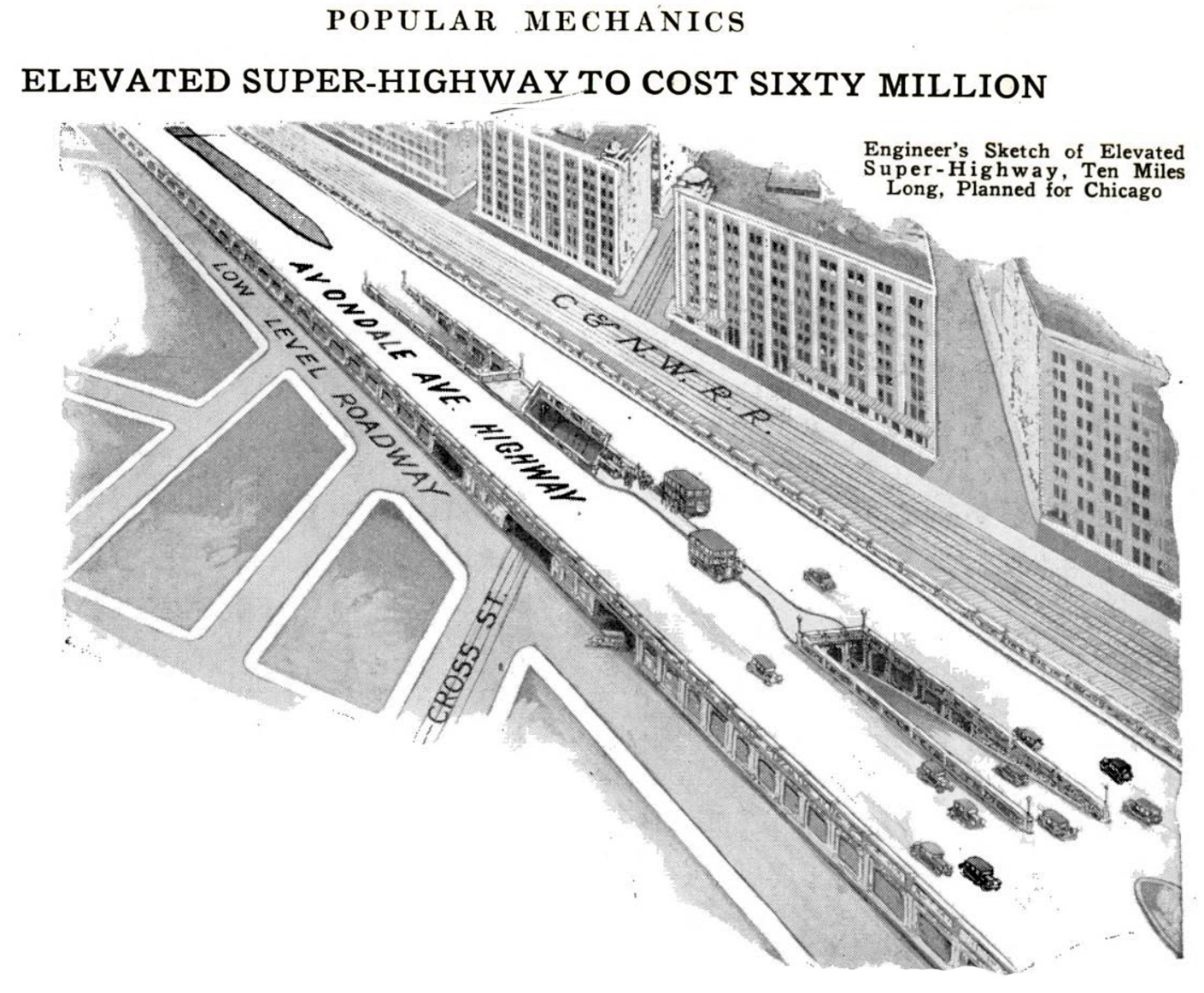 An elevated highway, nearly ten miles long and to cost $60,000,000, is being planned for Chicago as a super-road for automobiles entering the city from the northwest. One hundred and thirty-two cross streets, which now require slowing down or complete stops for opposing traffic, will be eliminated, while central ramps will accommodate twenty-three feeder streets, distributed at regular intervals. The super-highway will start at the northwest corner of the down-town loop district, where it will connect with a double-decked boulevard along the north bank of the Chicago river. The roadway will be 160 feet in width throughout its length, and will cut three miles from the distance now traveled to reach the country highways which branch out fan-wise to the northwest. It will have a capacity of 250,000 vehicles a day, and will connect with 300 miles of paved highways which serve 1,100 square miles of northern Illinois and southern Wisconsin. 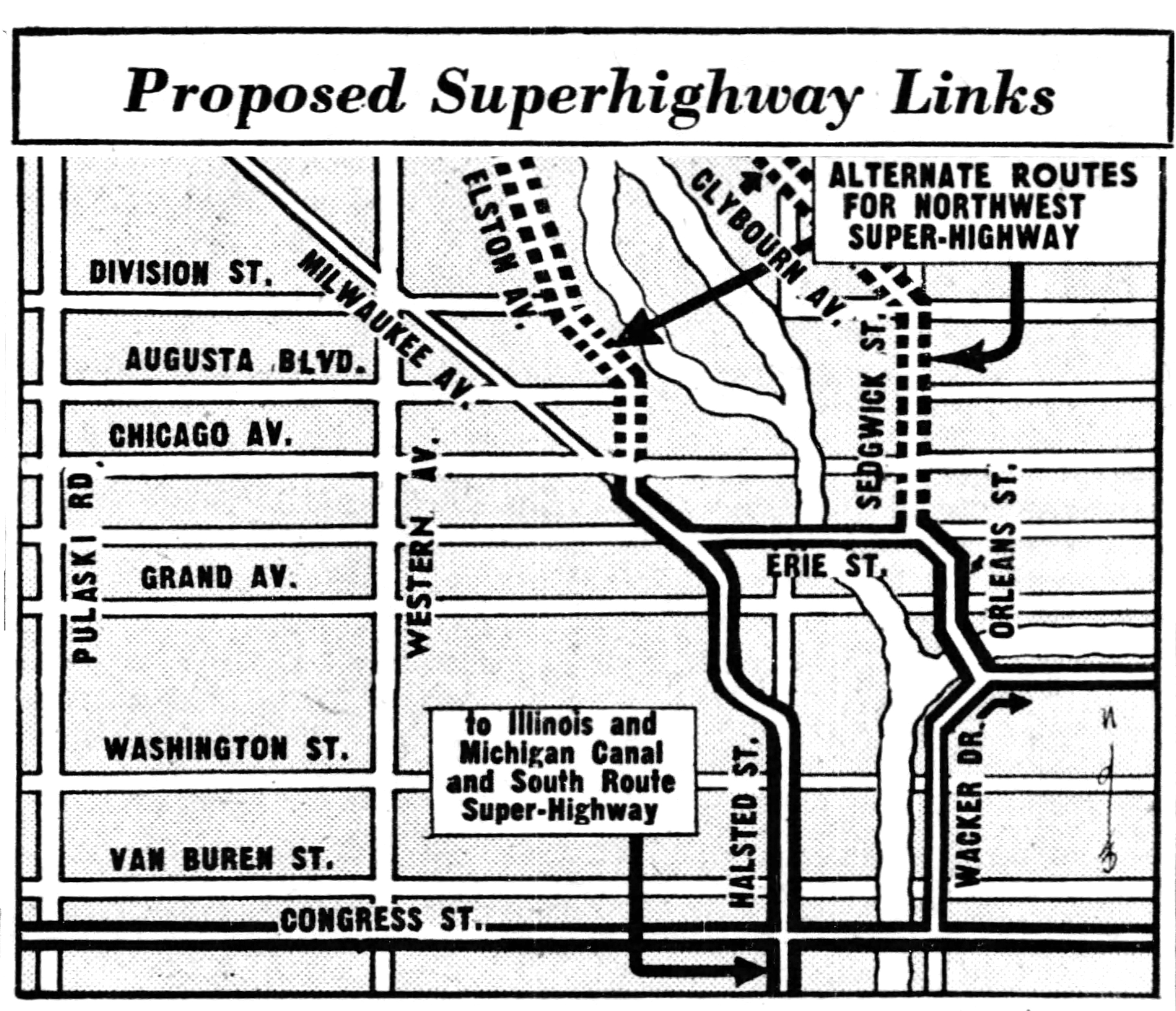 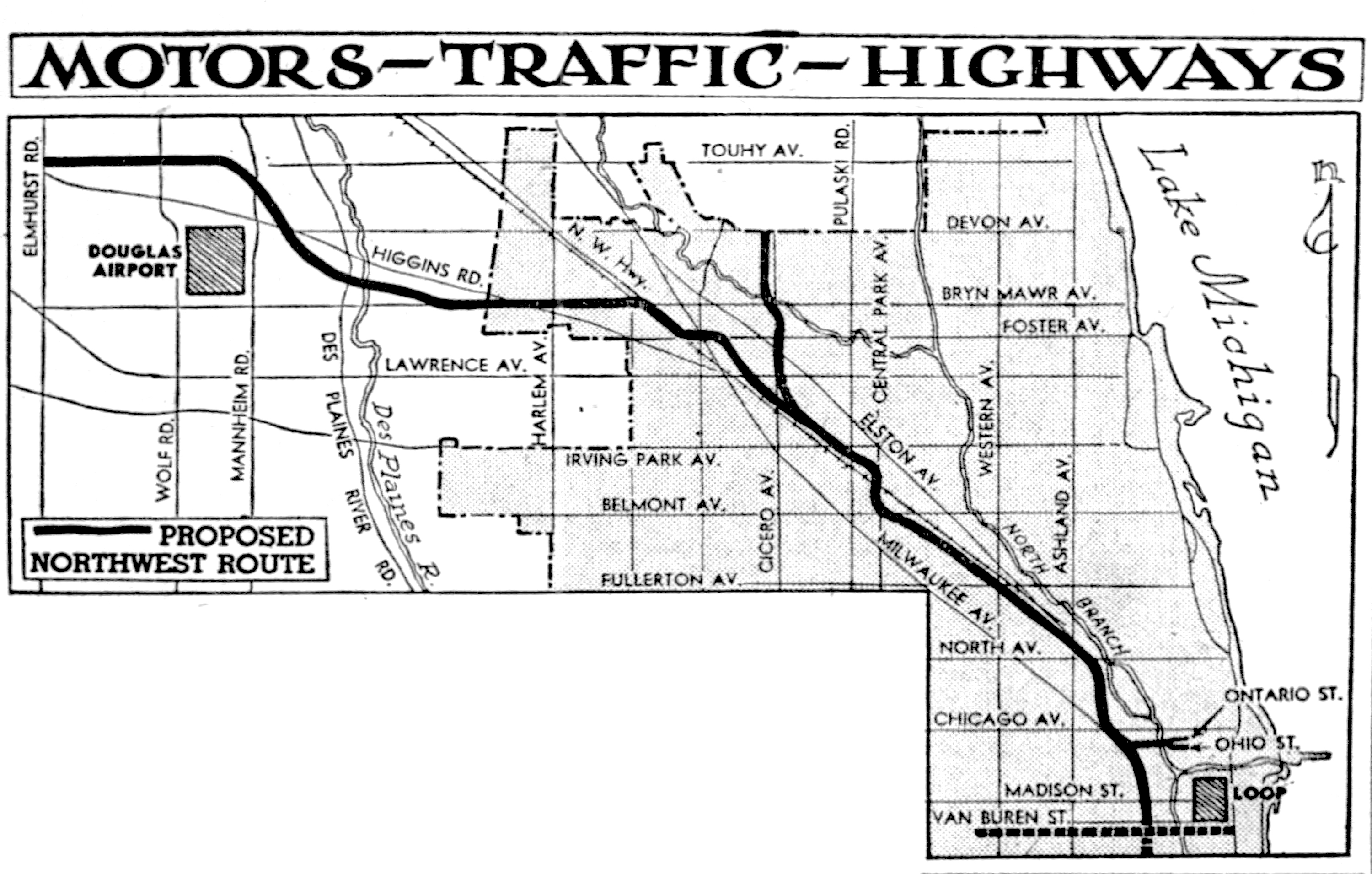 New route of the proposed $77,000,000 northwest super-highway, to serve the northwest side and the new Chicago airport to be built around the Douglas site near Park Ridge.