There is, in Chicago, a street of endless dreariness, a street curiously uninteresting to the casual glance and more and more uninteresting to the lengthening look. Yet the touch of genius made this street seem one of the most fascinating streets of the world, in humanity, in humor, in tragedy and kindness. It is Archer Avenue, in earlier days Archer Road, made by Finley Peter Dunne into “Archey Road.” It was one of the earliest streets of the city, stretching away from the center and far out toward the wilderness. Finley Peter Dunne originated “Mr. Dooley,” and placed him on “Archey Road,” and proceeded to fascinate all America.—Robert Shackleton, “The Book of Chicago,” 1910

To the disgust of Mr. Dooley and Mr. Hennessey, the A-archey road is to be paved with asphalt. The unpoetical Board of Local Improvements has voted that from State street to Western avenue, Archer avenue shall have asphalt pavement, electric lights, new curbstones, and a few trees. Mr. Dooley and Mr. Hannessey are of the opinion that romance is dying from the land. Not since the site of Fort Dearborn was covered up with business buildings, they hold, was such a blow struck at Chicago’s cherished traditions.

The Illinois Central railroad company will lend a hand to the work of destroying the A-archey road. In consideration of privileges granted it the company will contribute $10,000 towards paving the section between Stewart avenue and Halsted street. The total cost will be $127,500.

“It means farewell to Mr. Dooley’s A-archey road,” said Alderman Kent, who has been working for the improvement. 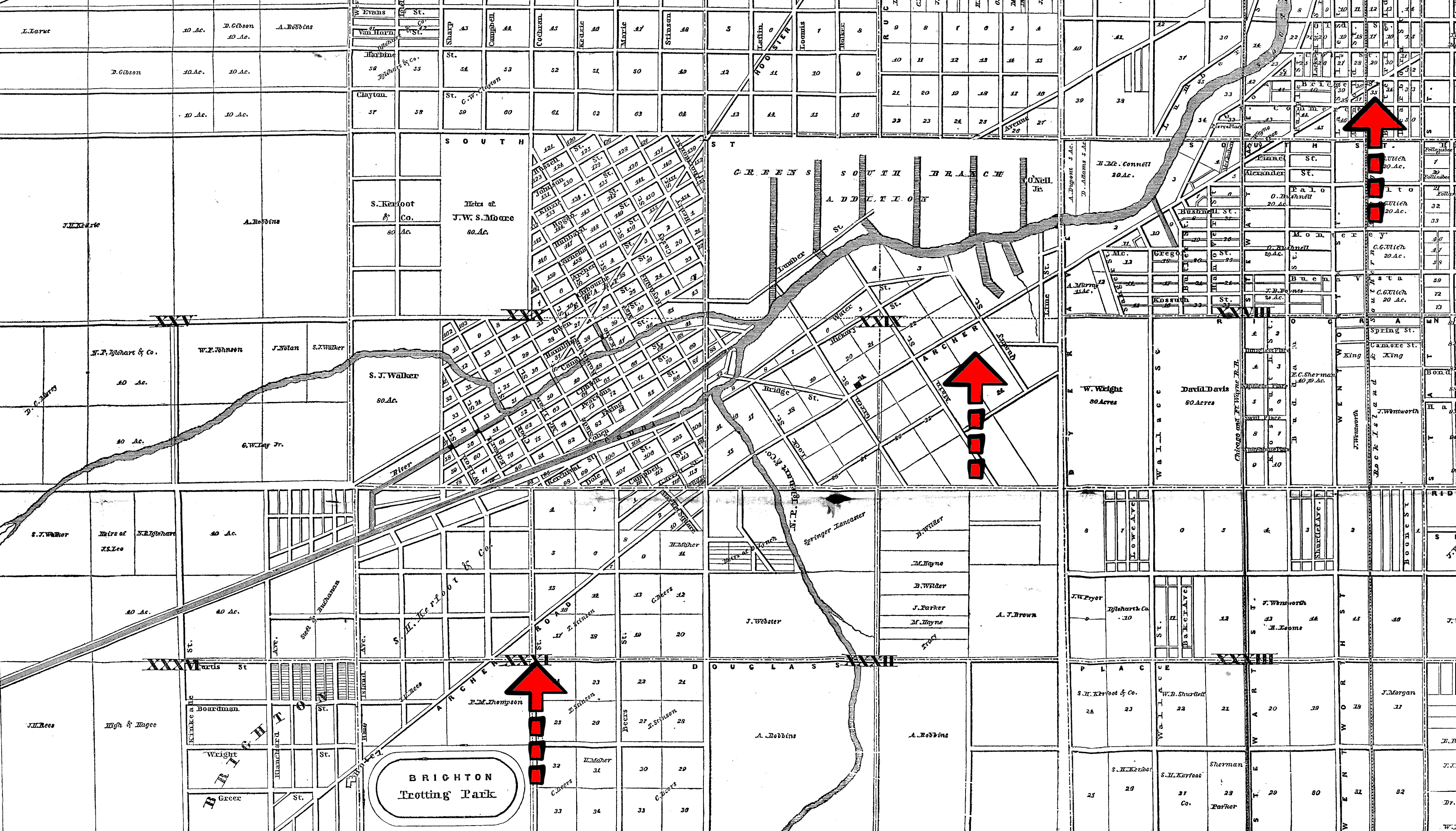 THE third transformation of Archer avenue is at hand. The successive changes which have marked the development of Archer road, the old State highway, lined with narrow and deep ditches and shadowed by lofty trees, into Archer avenue, the asphalted and cement curbed business street, dotted with glaring electric lights have occurred within the memory of many of the old residents of the famous thoroughfare. These asseverate that when the transformation is complete residence in the new fairyland will not be desirable.

The landmarks which until as few years ago were scattered along the street have disappeared before the iconoclastic touch of the energetic business-men, who are comparative newcomers upon the scene. The old Scanian Tavern, which was instrumental in giving the locality its former name, Bridgeport, and a portion of the Schuenemann packing-house, which antedates the great Stock-Yards industry in the city, are two of the few remaining relics of the departed glory of “Archey” road.

Archer road received its name from one of the early residents of the city, who was the owner of several acres of land along the intersection of what now is Ashland avenue. In 1832, with State street and Milwaukee avenue, it was one of the direct lines leading into the little town on the shore of Lake Michigan and was the highway to Lockport, Joliet, and St. Louis. The memory of several of the residents of the street recalls the time when the four-horse stages running between the rival cities rumbled along the narrow roadway.

At the little wooden bridge stretched across the river near Ashland avenue fresh relays of horses were awaiting, and if fast time were desired were hurriedly substituted for the tired quartet and the rapid transit between the towns resumed. Usually, however, a short stop for refreshments was made at the taverns of Samuel Miller or Michael Scanian located near the bridge, and the title Bridgeport, which later was bestowed upon the entrance of the entire locality, was given place.

Until 1838 the road maintained its position as the principal thoroughfare leading to the City of Chicago, two miles away. The opening of the Illinois and Michigan Canal and the running of a line of packet boats between the Illinois towns relegated the road to obscurity. For years almost the only vehicles seen upon it were the oxen and wagons of farmers bringing their loads of vegetables and provisions to the Lake street markets. On the return journey to the farms stops were made in the heavily timbered land near the bridge, and the improvised tents of the farmers could be seen at all times during the summer months.

The installation of the houses of the Hough Packing company at Halsted street and of John L. Hancock at Loomis street gave a fresh impetus to the business of the ditch-lined street, which lasted for a score of years and made it famous throughout the country. They were the first wholesale provision houses in the Western country and for years the largest. Competing establishments were erected along the street, including the smaller houses of Seaverns, Schuenemann, and Armour, and drew to the street armies of workmen.

Prosperity reigned and the fame of Healy’s slough, the little red bridge, and the fighting ability of the average resident of “Archey” road were heard upon the stage in song or story and were scattered about the country in newspaper paragraphs. Politics and prizefighting were the themes of most interest to the denizens of the street, and the ranks of both callings received many notable additions from its residents. 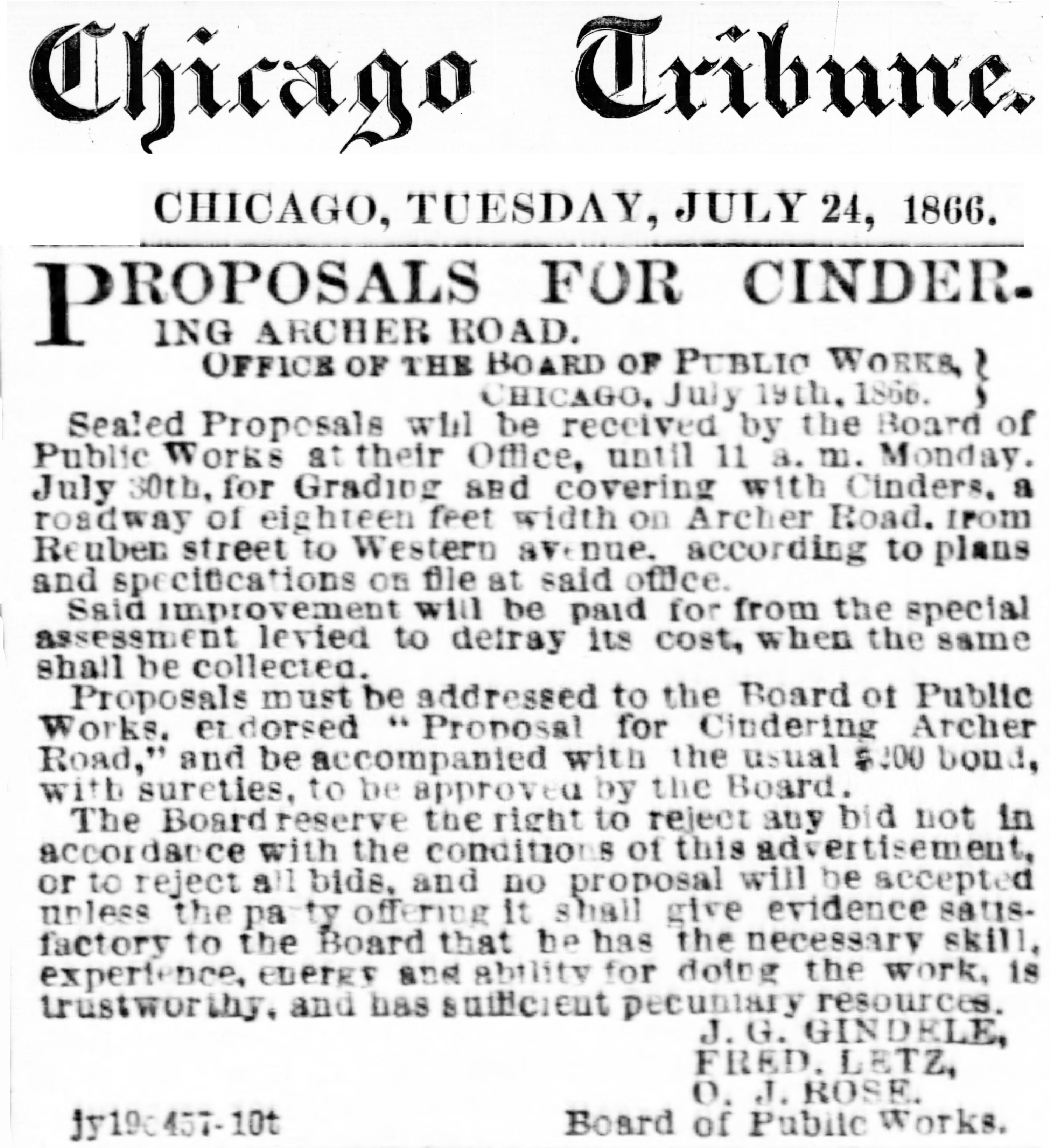 The position of police officer in the district was not enviable. In accordance with the rule of survival of the fittest, those who continued to travel their beat six months after their first report at the Deering Street Station were to be avoided by seekers for trouble of any description.

Their most strenuous efforts failed, however, to preserve the ordinary quietude and many mysterious murders are recorded in the police archives as having occurred along the street and about the red bridge at Butler street and the smaller one at Salt street.

In 1874 the first of the great changes which have transformed the road into a metropolitan street occurred, when by private contract “Tom” Macklin filled up its bordering ditches and laid the first paving blocks along its surface.

The slips of the river, whcih extended across the street, had in the interim been filled and the bridges removed. “Archey” road, in the pride of its new aspect, hastily discarded its former appellation and appeared upon the city maps as Archer avenue. The jealous care with which the pavement was guarded preserved it for fourteen years, when under special assessment the street was repaved.

The removal of the packing-houses to their present location and the departure of many of the employes were followed by a new class of inhabitants, who looked with disfavor upon the condition and the past fame of the street. Trolley lines, electric lights, and now asphalt paving have succeeded the yellow horse car lines, the uncertain paving and sidewalks, and the odiferous breezes so treasured by Mr. Dooley. But the oldest inhabitants look sadly upon the vandalism and shake their heads mournfully as they exchange reminiscences of the departed glory of “Archey” road.

“Archey Road” in the Past.—The old red bridge which for the last thirty-five years has done service on Archer avenue over the south branch of the Chicago river is to be replaced with a bascule structure of the most modern type, to cost $147,000.

The completion of the bridge will be in the nature of a finishing touch to public and private improvements that have transformed the appearance and character of this historic thoroughfare within a decade.

Contrary to general belief, Archer avenue was not originally a highway created by the team traffic of pioneer days, like Cottage Grove avenue, Milwaukee avenue, Ogden avenue, Lake avenue, Clybourn avenue, and Evanston avenue. On the contrary, it was created by the builders of Chicago for a special purpose.

The first board of Illinois and Michigan canal commissioners, appointed in 1836 by Governor Duncan, included Colonel William B. Archer, a large land owner. When all the preliminaries for the construction of the canal were arranged it became necessary, in order to facilitate the work, that a roadway be laid out from Chicago to Lockport, running nearly parallel with the canal, and it was proposed that the cost of the road—$40,000—be raised from the sale of public lands. The advisability of the expenditure was questioned, because Colonel Archer owned much property at Lockport, which the road seemed designed to benefit. In other words, it was believed by some that Colonel Archer was using his official place and influence in his own interest. However, the necessity for the highway was so evident that the critics were silenced. The street was laid out, and, in vindication of Colonel Archer, christened “Archer’s Road.”

As Archer’s Road it was known for many years. In the course of time Bridgeport, which was originally a quiet little hamlet, became a great center of industry, by reason of the removal of the stock yards to its vicinity from the West Side. Archer’s Road was the most direct route to Bridgeport, and naturally grew to the importance of a city thoroughfare.

The establishment of rolling mills and other factories added to the increase of the industrial population tributary to the Road, and the immense amounts dispensed to workingmen in waqges weekly made it a most desirable thoroughfare for cheap saloons, which in turn attracted and harbored the idle and reckless.

“Archey Road” was a term of endearment conferred upon it by the old residenters, and though the city council had officially declared its name to be Archer avenue, it is “Archey Road” to this day in the mouths of of the old settlers.

It was a never a street given over to vice, as that term is applied to “Cheyenne” and the “Levee,” for instance. The great majority of the inhabitants were decent people. The crimes committed on “Archey Road”—and many of them were committed near the old red bridge which is now to be removed—were perpetrated by desperadoes who had nothing in common with the working people=, and who haunted the district only to prey upon them.

“Mr. Dooley’s old red bridge on A-archey road” is to be replaced by a modern structure. Supt. Pihkfeldt has ordered it demolished, and a temporary bridge for the use of street care and pedestrians will be opened today.

Work on the new bridge will begin immediately, and when completed the structure will represent a cost of $200,000. 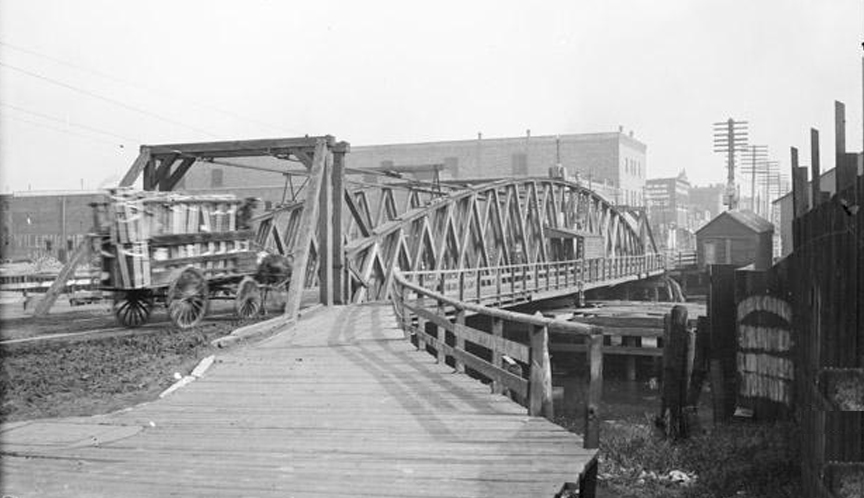 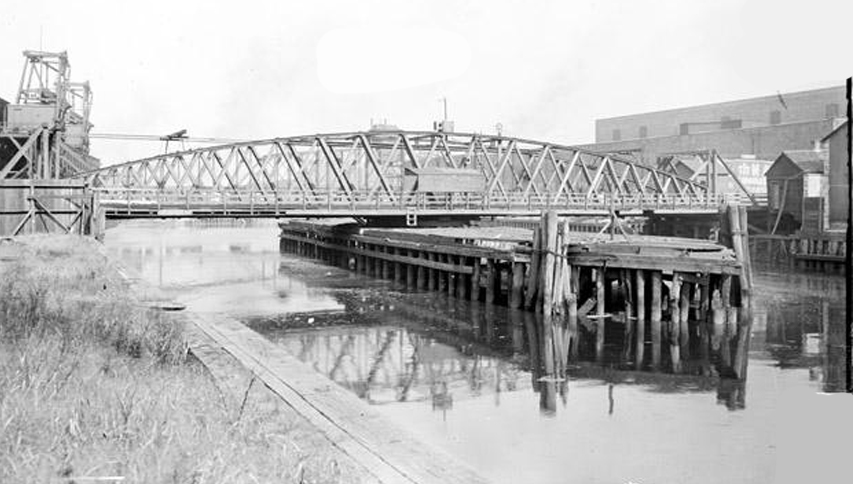 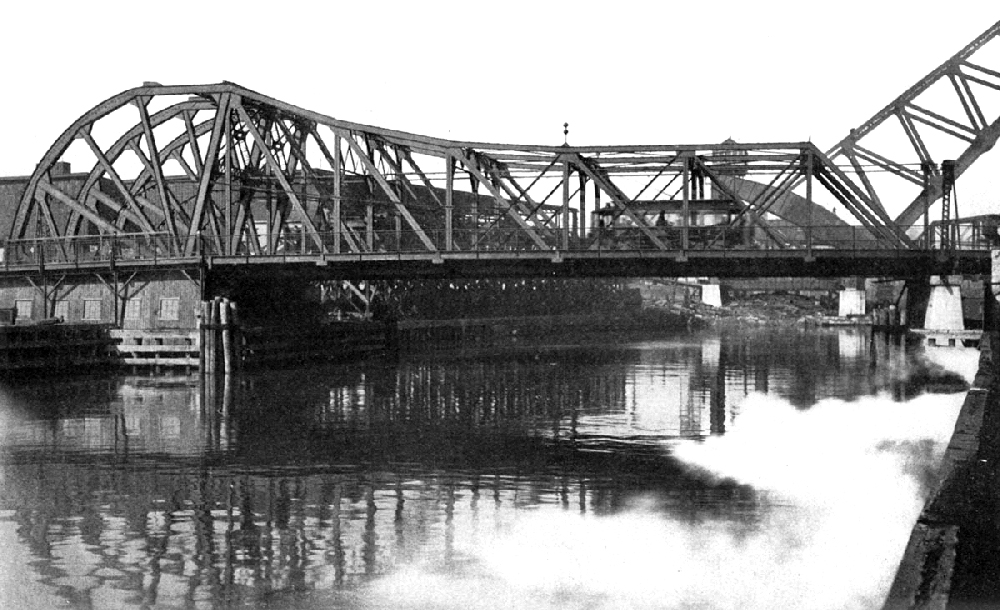 Archer Avenue Bridge (#2) Opened.
After over a year employed in its construction, the new Archer avenue bridge was opened for traffic yesterday morning. The bridge was built by the FirtzSimons & Connell company and the Roemheld & Gallery company and the cost was $150,000. It is 212 feet long, 60 feet wide, and allows a passage of 107 feet for vessels between pier projections.

Approve Archer Av. Bridge (#3)
The council approved an ordinance authorizing construction of a fixed bridge to carry vehicle traffic over the south branch of the Chicago River at Archer avenue. The bridge, costing $1,150,000, will replace a bascule bridge built in the last century.

Archer Avenue Bridge Dedication Is Slated
The new Archer avenue bridge, 1.2 million dollar structure spanning the south branch of the Chicagi river just east of Ashland av., will be dedicated in a ceremony at 11:15 a.m. Tuesday (May 21), it was announced yesterday. The six-lane fixed bridge is 93 feet wide and 217 feet long.

During construction, Archer Avenue will be reduced to one lane in each direction from Pitney Court to Paulina Street.

During the work, left turns will be prohibited from Archer onto Ashland Avenue.

The first job is reconstruction of the Archer Avenue Bridge, which was built over the Chicago River in 1963. The work will include replacement of a deck and new structural steel, according to the Chicago Department of Transportation.

The other segment is an attempt to alleviate traffic problems at Archer and Ashland Avenues by redesigning the intersection.

An overpass at Archer will be permanently removed and traffic bound for Interstate Highway 55 will be routed onto Robinson Street. Robinson will be redesigned.