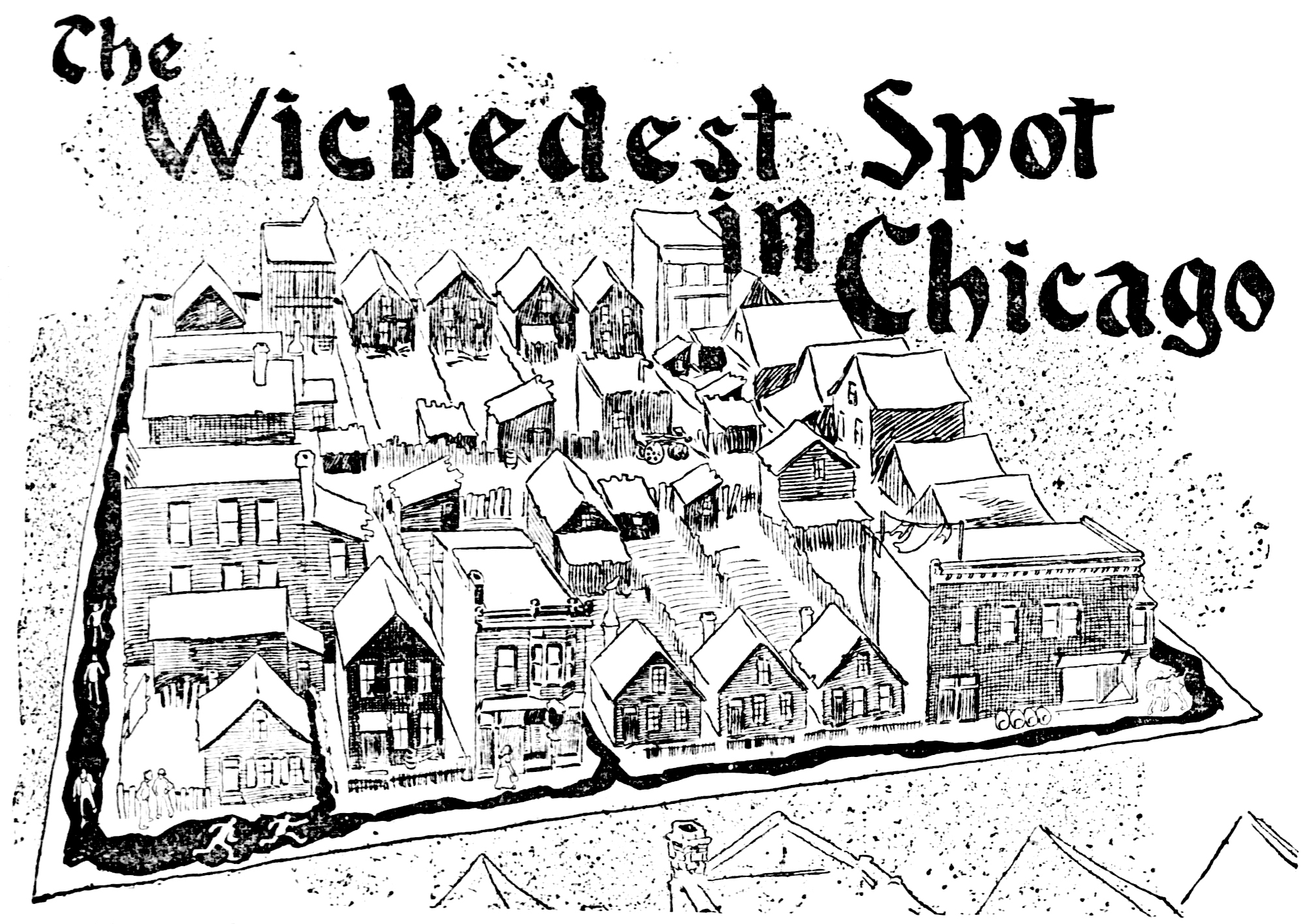 If black ink represented evil, a splotch of it on the map of the City of Chicago within the limits of the river on the east, Wood street on the west, Harrison street on the north, and Sixteenth street on the south, would cover, perhaps, one of the “toughest” criminal districts in the world.

The district is familiarly known as the Maxwell Street Police precinct. It has been the breeding ground for the criminal classes of Chicago. Its graduates have gone out into the world and gathered fame and punishment in a dozen different climes. Those who have made a study of the Whitechapel district in London declare that in brutality of crime the latter place can in no wise be compared with Chicago’s notorious district. It is a safe assertion to say that more genuine criminals have been born and brought up in the Maxwell street district than in any other similar community in the United States.

And yet to say that the Maxwell street district is all evil would be doing a strong injustice to many good and law-abiding citizens who reside in that locality. The Maxwell street district is not all evil. In one sense the residents there are peculiar. A holdup, murder, harrowing in its frightful details, some bizarre crime, which might almost outrage human conception—these the residents of the district have long been accustomed to regard with equanimity. But there are some forms of small vice which the people there will not tolerate. No such scenes as are witnessed nightly on the levee, in which hundreds of women take their parts, are ever seen in the Maxwell district. It is there that the criminals live, They do not bring views of thus kind to the doors of their homes.

Three Women Murdered.
Only recently the attention of the city and the surrounding country has been called to the Merry tragedy, in which a woman was brutally slain. Swiftly following it came two other women murders. All three were almost inhuman in their execution. There seems to have been no redeeming features in the crimes. A criminologist would say that they were the crimes of degenerates who has almost reached the last round of the ladder in the downward march.

The murder of women is a comparatively new departure in Maxwell street crime. Policemen of the district who have made a life work of struggling with the lawless classes of the locality give a sharp and inclusive explanation for this class of crime. They describe it by the word “can.” They declare that the present day criminal of the district is a striking object lesson of the evil which results from heavy drinking made possible to the poor by bringing drink to the house in a pail. By this method the policemen say that the most poverty stricken resident can keep himself in a perpetual state of intoxication. An outraged nervous system results, all the semi-savage instincts in the human composition are brought to the surface, and the end comes when some force assault is made upon a fellow being. The murders have been the outcome of a sort of maniacal rage, which closely borders upon delirium tremens. The person selected has generally been some one incapable of defense—in the three cases mentioned the wife being the victim. If the police of the district could express their feelings in the way of a student of crime and criminals they would say there is a decadence in crime, as compared with ten years ago. A wife murderer is generally a coward—he cannot compare with the bold and defiant criminal who only a few years ago longed to distinguish himself in a deadly hand to hand scrimmage or in a square up and down “gun fight.” But the days of the gun fighter at the door of his own home is almost gone in that part of the city. 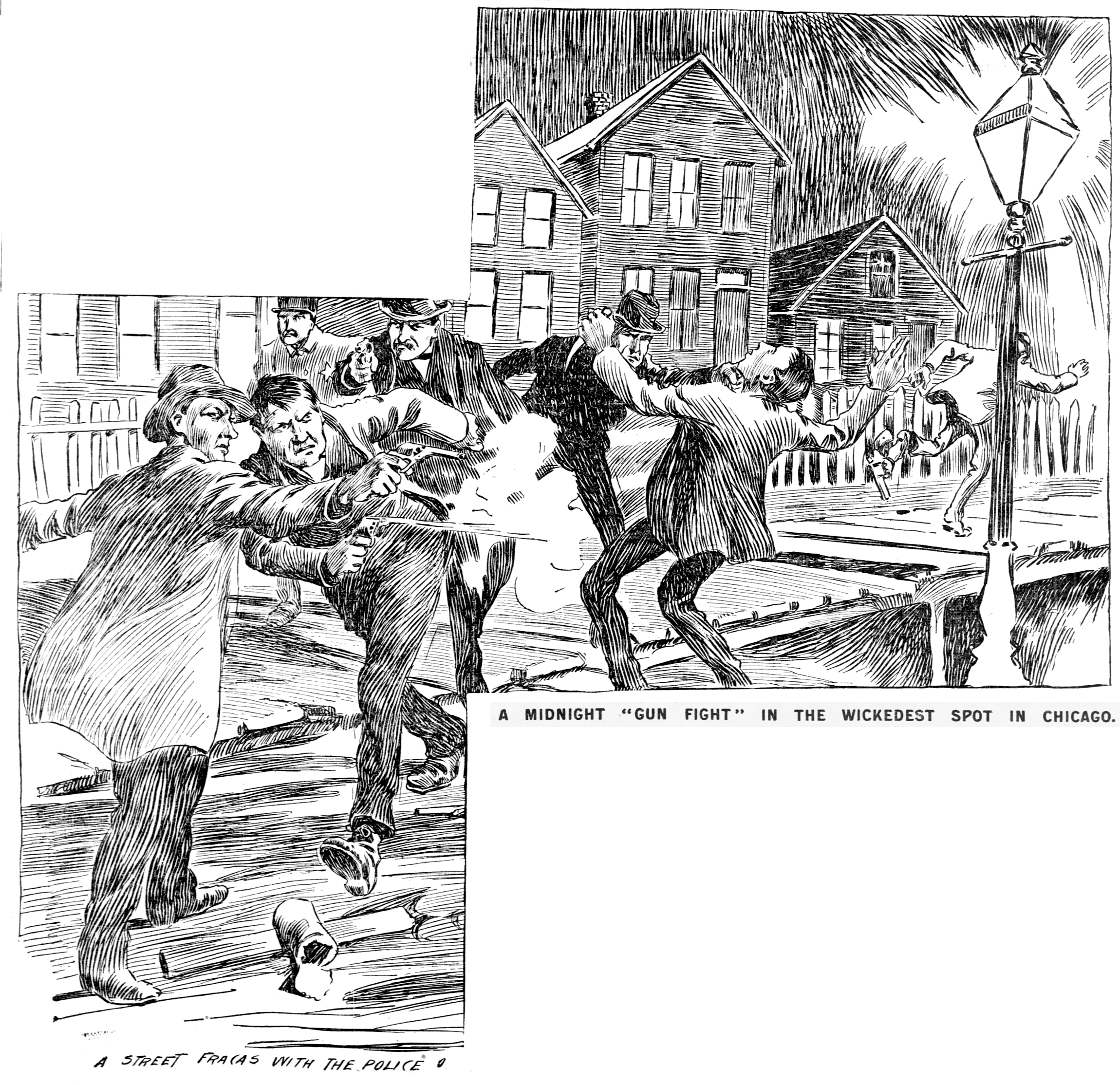 Punishes Many Criminals.
The territory under Captain John Wheeler’s supervision furnishes more recruits for Pontiac and Joliet than all the rest of the city put together, according to the statements of many observant policemen, and yet the real criminal section is a comparatively small part of the whole district. In respect to poverty, ignorance, squalor, filth, and inbred contempt of all sanitary notions, the criminal belt of the Maxwell district has never, at least not since the fire, been far behind its London counterpart.

In a compilation of crime records for the past four years now being made at police headquarters, it is estimated that out of the four hundred murders which have occurred in the city during that time, at least seventy-five of them have come from this district. This is almost a fifth of the total number.

Hitherto public attention has been claimed in behalf of the district by the appalling death rate, the frightfully unsanitary conditions of a large proportion of its tenements, and the wretchedness and hopelessness of life in its hovels. The criminal aspect now prevents itself with peculiar force.

Properly viewed, however, the two things are inseparable. Crime reigns there because it is the home of naked poverty and the refuge of the laggards and the physically, mentally, or morally handicapped portion of the community.

Here is the list of wife murders which are causing men to pause and inquire what manner of place the Maxwell district is:

The preference of the criminal classes for the Twenty-first Precinct as a place of residence is in wise a reflection on the policing of the territory. In point of numbers the precinct command is the largest in the city, the payroll carrying 146 names. As to quality the officers and plain clothes and uniformed men are, speaking generally, conceded to answer Captain Wheeler’s often repeated requirement, “Give me gun men.”

The police of other sections of the city have to deal with only a small proportion of the men who furniah the Maxwell peace guardians with their staple employment. 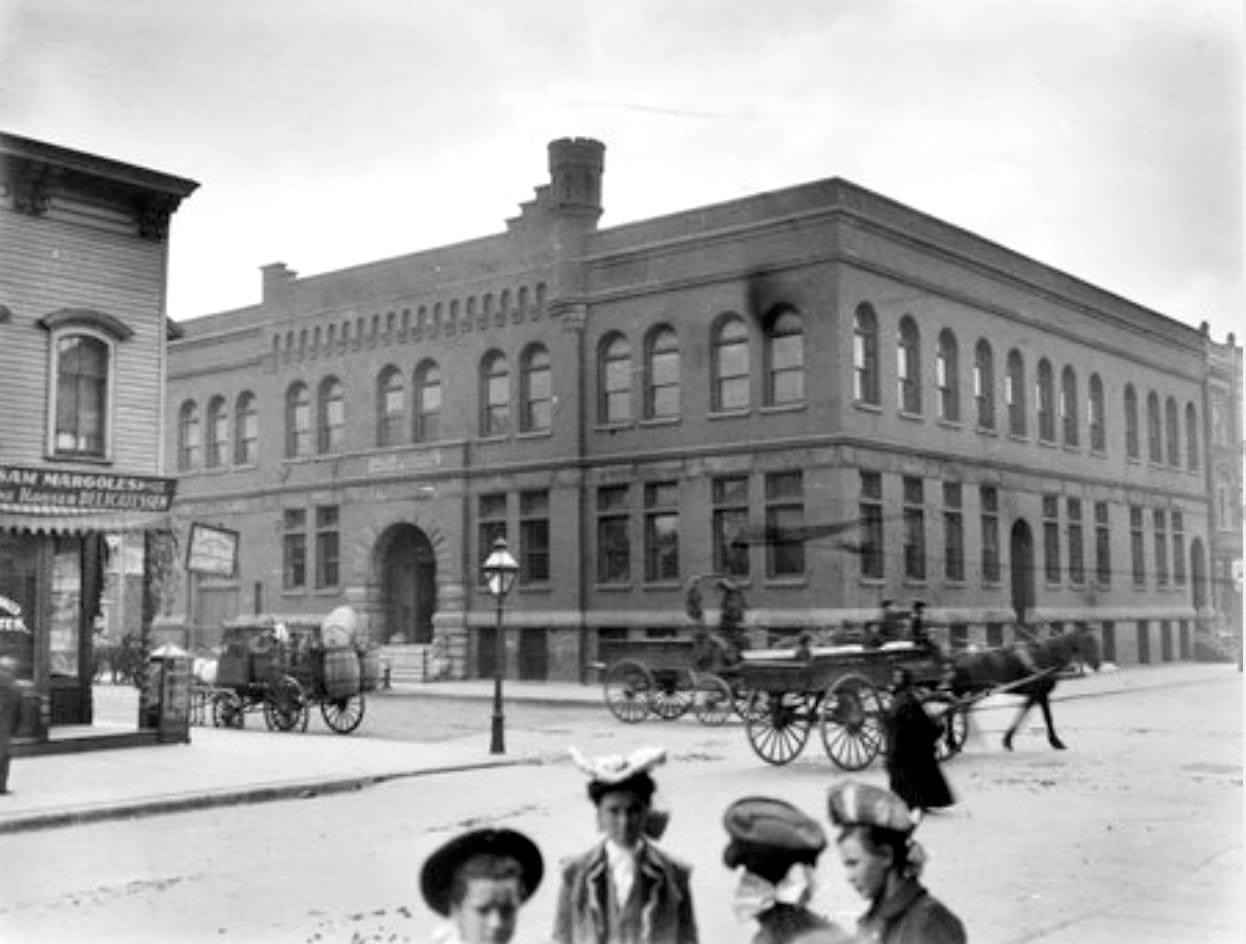 Bravery of Police Officers.
A recent instance will illustrate this. Detective Hanley was praised to the point of embarrassment for exploring the dark underground passageways formed by low plank sidewalks around Nicholas Redmond’s livery stable a few days ago, when a deadly encounter with two desperate criminals was in prospect. Hanley earned the admiration his conduct elicited, but the incident provoked hardly passing comment in the squadroom, because any one of the policemen in the precinct is likely to be called upon to perform equally dangerous duties at any time. It was believed that Christopher Merry and James Smith were hiding in these recesses. Carrying his revolver in his right hand and a bull’s eye lantern in his left, expecting every moment to be his last, Hanley went bravely about his task, taking no thought of the harm that might come to himself. Such experiences as these are matters of everyday occurrences to Maxwell street policemen.

Crime and every other form of degradation go hand and hand in the Maxwell street district. The streets which figured most prominently upon the sanitary reports last year also secure frequent mention in the police reports. The worst places as to sanitary conditions are tenanted by Greek and Italian fruit peddlers, who keep as many as ten or a dozen in a small room, making their beds upon potato sacks. The air is redolent with the odor of ripening bananas. But all through this district houses can be found four, five, and seven feet below grade.

Once upon a time a wooden pavement was laid upon these streets. That part which has not been carried away and burned has in most instances been trodden under foot or is sodden with the filth of years. The lower rooms of the houses, banked up against the walls of the streets, are reeking with moisture many months of the year. The plaster, where any remains on the walls, is discolored and covered with a thick coat of dirt. In such houses one may find a dozen families, many of whom eat, sleep, and work in a single room.

Deadens the Better Instincts.
One need not descant upon the fact that the higher instincts cannot be cultivated under such conditions. One cannot be surprised that boys grew up to prefer a “can rushing” gang to the society of sisters, and that the girls too often seek amusement in the saloon or the low dance hall.

The streets of this section at night do not disclose any particularly unusual features, except when the police are making a descent or attempting to capture the members of some gang suspected of crime. Then there may be a startling duel in which men may be killed. There are many more lively portions of the city than this district. A person walking through the locality might observe that he was in a neighborhood of poverty, but there might be little to indicate that he was in the midst of a section where some of the most desperate criminals in the world have been born and reared. In summer the intolerable heat drives the dwellers in overcrowded tenements into the streets, and one may see thousands of men, women, and children lying pellmell among garbage boxes, in the gutter, and on the sidewalk. This is the season of “can rushing” par excellence. 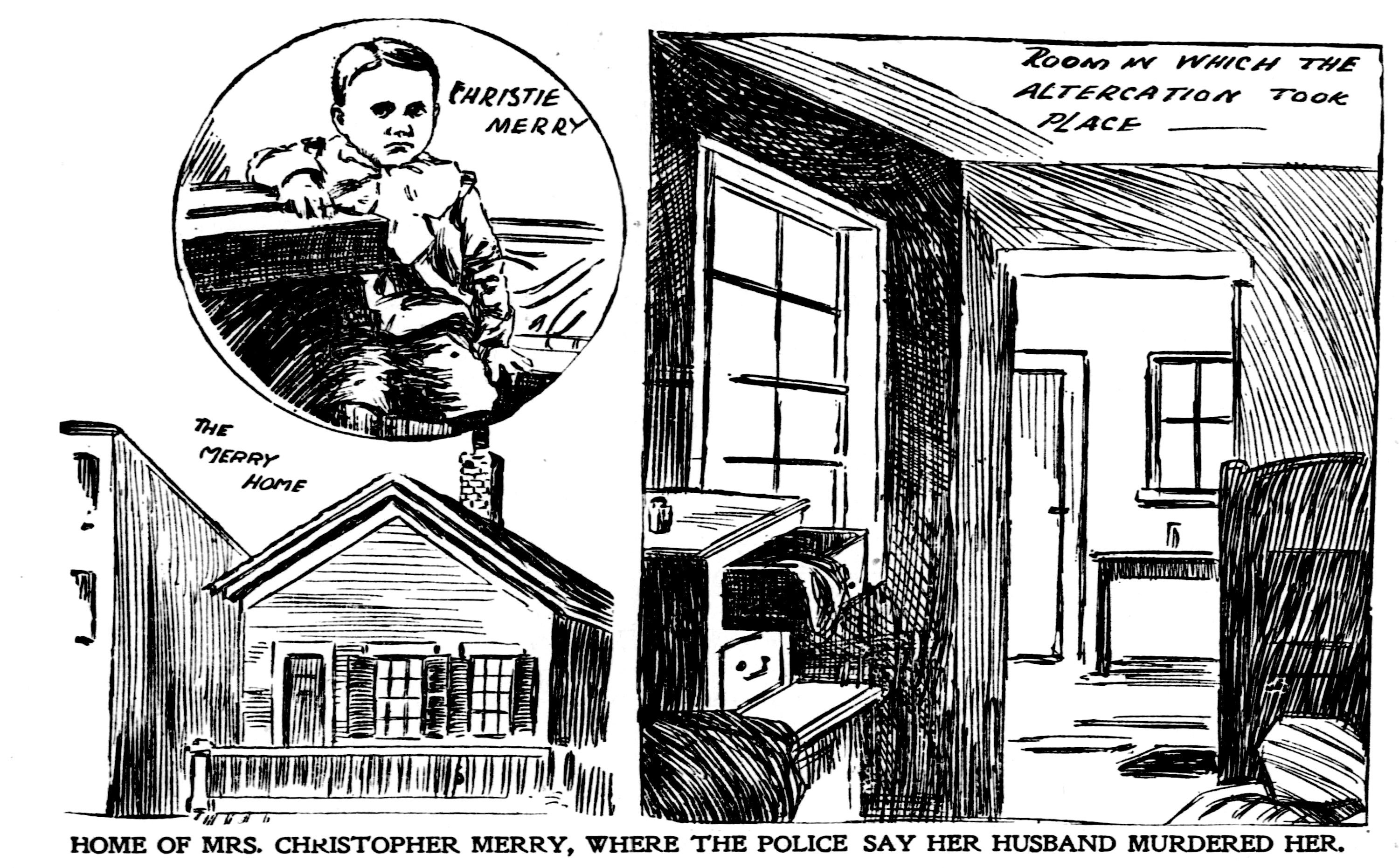 The following statement as to ghettoes is made by Mr. Zangwill, the Jewish novelist and playwright:

Ghetto is an Italian word. The thing is an Italian institution, though there were comparatively mild imitations in the Judentrasse, or Jews’ street, of many mediaeval or German towns. The first ghetto in the strict sense was established in Venice. You can still see there the place where the gate formerly stood. The ghetto in Rome followed. It was instituted by Pope Paul IV., in 1556. Until 1847 the Jews were segregated here by law. The ghetto was removed in 1885 and the following years, the demolition having been rendered necessary by the New Tiber embankment. I have stood on the spot it formerly occupied and, looking over the huddling mass of dirty ruins, I was struck with pain and wonder at the thought of the thousands of miserable alleys and streets that once intersected it, the tens of thousands of inhabitants formerly crowded into so scanty a foothold. It struck me as one of the most curious signs of the tendencies of the times that, when a new Jewish synagogue was recently contemplated, the site finally chosen for it was in the very heart of this area redolent of memories of former Jewish persecution.

The compulsory ghetto is now dead here, and everywhere else, excepting only in Russia. There, however, it is not a ghetto of streets, but of towns. The Jews are banished to certain localities, where they live separate from the rest of the population under stringent laws. They multiply greatly in these towns through what I call their improvident reliance on Providence. The Jews are naturally prolific. They produce that fecundity is the secret of strength and life if the natural outlet for an overflow be allowed. But to dam up the Jews by unnatural restrictions of locality is to find the secret of death. It produces an overpopulation which is fatal. Even means of livelihood are cut off. When there are twenty rival shops where only one should be, a throat-cutting competition must result. But as I have said, it is only in Russia that the official ghetto still remains. Nevertheless, the word still survives in the popular vocabulary as a term for that portion of every city which people of Hebrew race, or at least the poorer members, voluntarily inhabit and make their own. It is in this sense that I use the word. 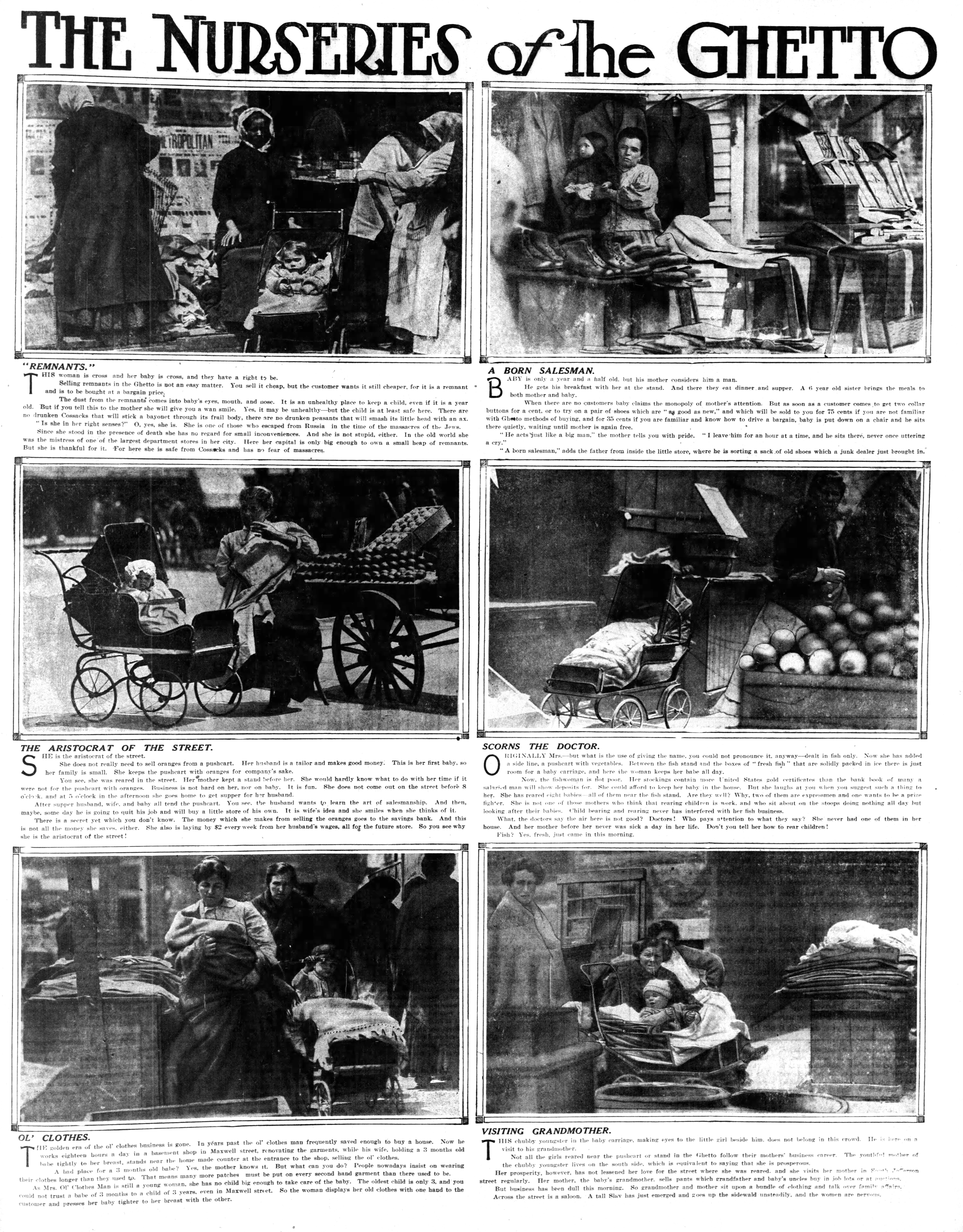 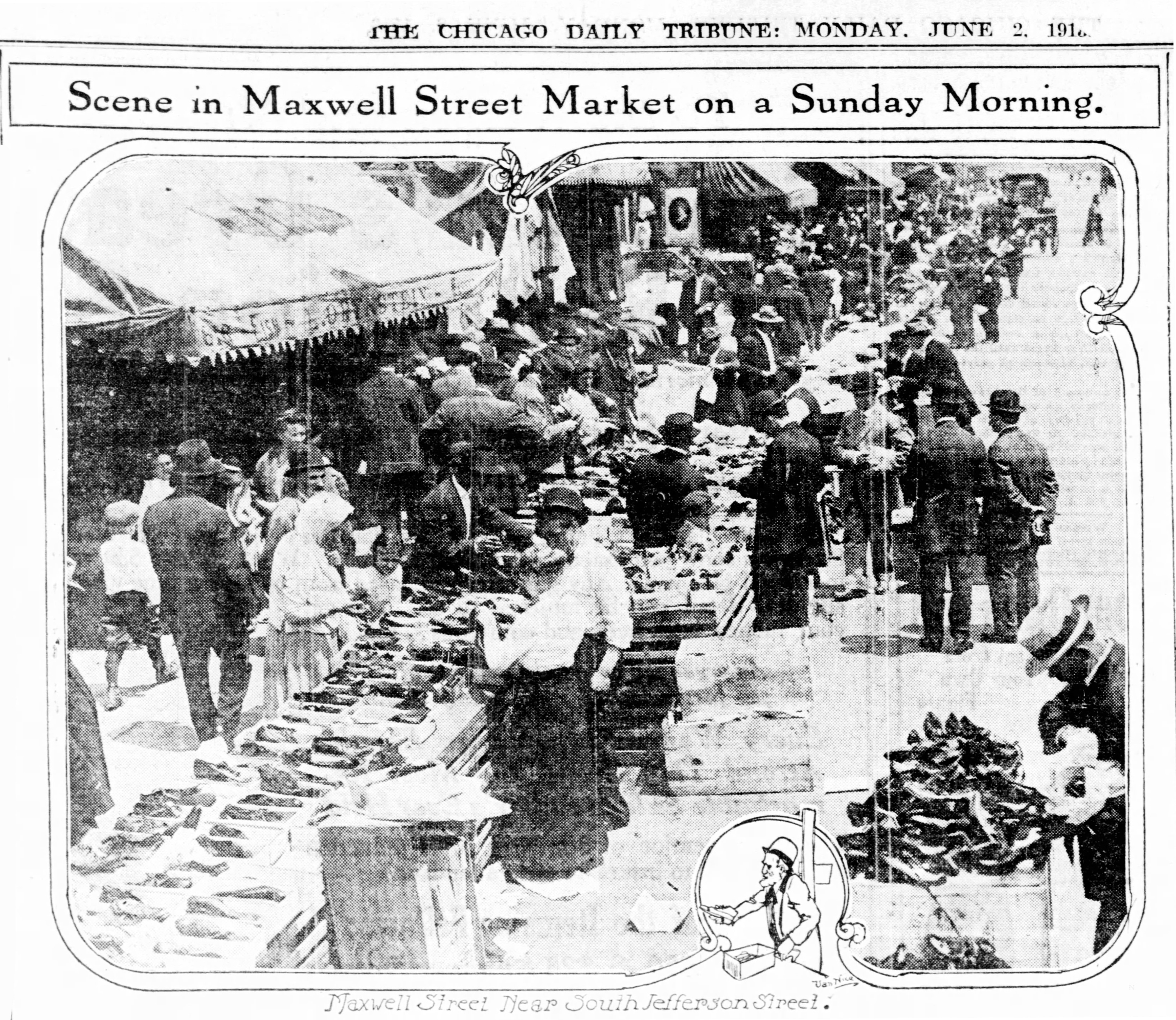