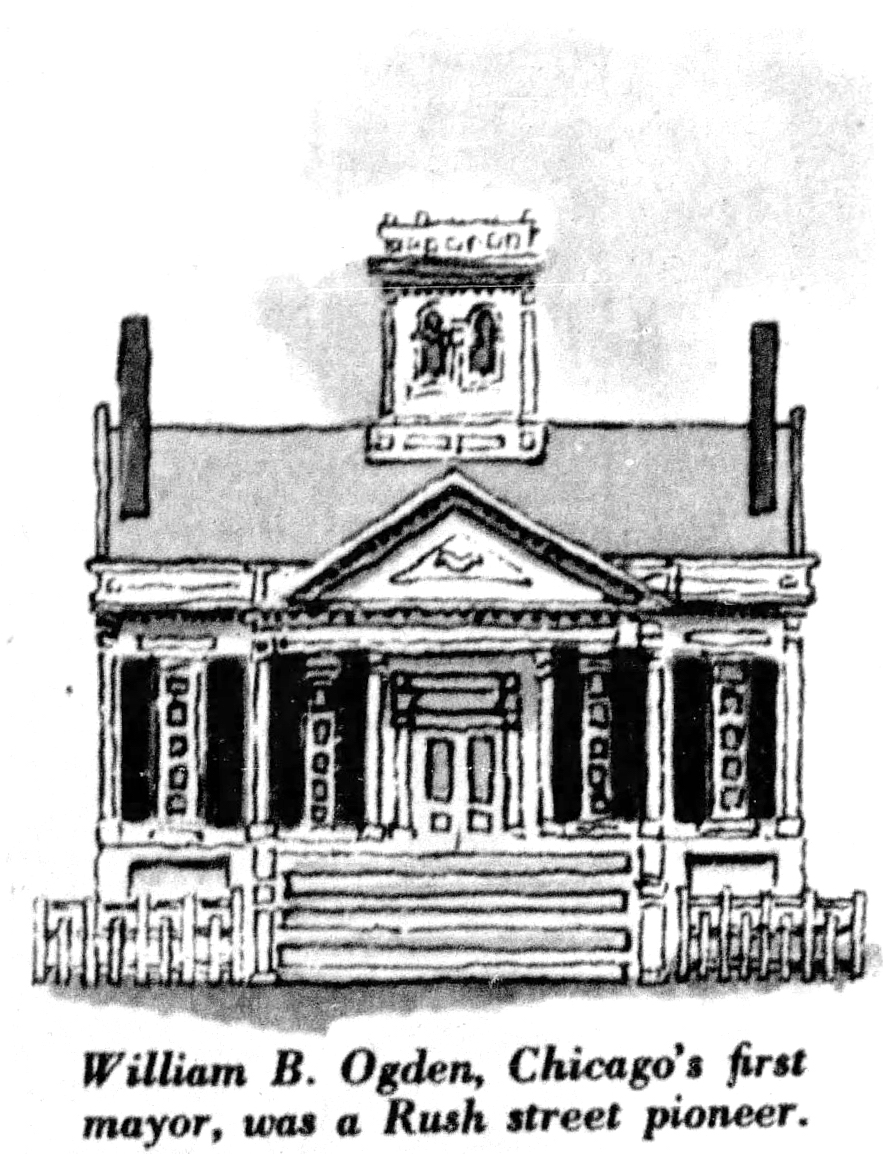 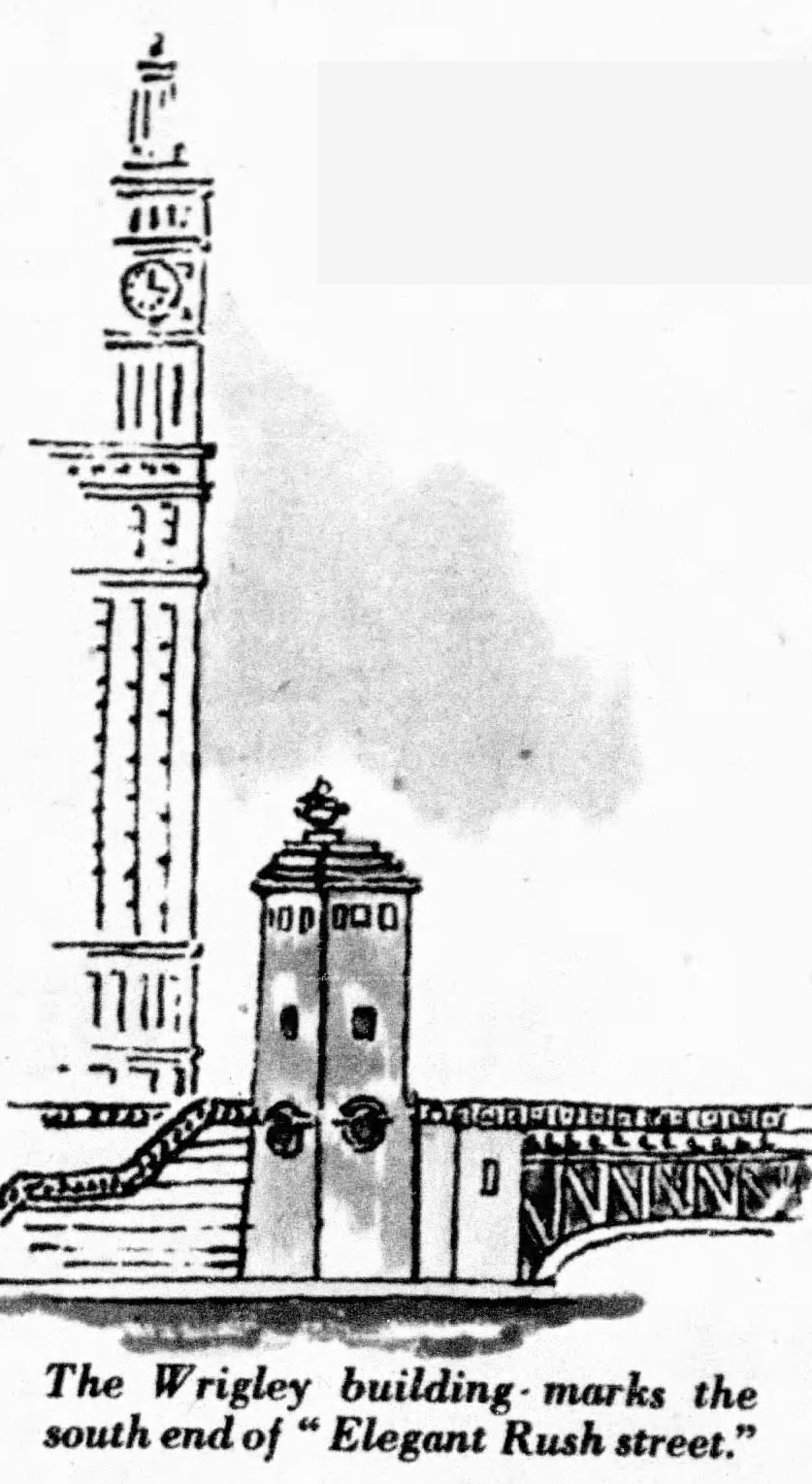 “Quaint little Rush street,” they call it today, noting the old mansions, falling into decay. But in the ’80s and ’90s, and even into the present century, it was “Elegant Rush street,” home of the most prominent families of Chicago. At 5:30 in the afternoon, Rush street once resounded to the tread of horses’ hoofs and the jingle of silver chains on expensive harnesses as liveried coachmen drove the rich men of the near north side to their homes.

With the building of Michigan Avenue bridge in 1920, traffic was diverted and Rush street became like a quiet eddy near a rushing river. Since that time many of the fine homes have been razed, remodeled, changed. But enough remain for us to be able to recapture something of the flavor of old times, if we look about a bit. So let’s stroll along Rush street, from Grand avenue to Chicago avenue, recalling other days!

On the west side of Rush street are the Milner hotel, at Grand avenue, and the Alexandria, at Ohio street, withe the Shriners’ Medinah temple nearby. The Croydon-hotel, farther north, occupies the site of the gray stone mansion built by Judge Mark Skinner, friend of Abraham Lincoln. The famous Virginia family hotel, built by Leander McCormick, brother of Cyrus McCormick, the “Reaper King,” once stood in this area. It was demolished in the ’30s to make way for a parking lot. Opposite, on the east side of Rush street, were two early apartment buildings, the Marquette and the Charlevoix, which housed many socially prominent residents, including some of the town’s most eligible bachelors in the early days.1

The home of Mrs. Emmons Blaine, built in the ’90s, is partly surrounded by a high brick wall, Mrs. Blaine still lives in this fine residence at the southeast corner of Rush and Erie streets. The L. Hamilton McCormick house to the south has long been occupied by the Kungsholm restaurant, partly rebuilt following a fire. At the southeast corner of Rush and Ontario streets is rising the Decorative Arts building, where the fashion Arts club will have its new home. W. F. McLaughlin, the coffee merchant, once lived in a square brick house on this site. Next door is the Goddard building.2

Toward the north, at the northwest corner of Rush and Ontario, the new Cadillac building occupies a part of the site of Mayor William B. Ogden’s home. Built in 1837, it was the first house in Chicago to be designed by an architect. The Ogden home disappeared long since, of course, but at 650 Rush st., the home of John V. Clarke, early Chicago banker, still stands. On the glass in the front doors may be seen the monogram, “J.V.C.” Beyond is the Robert Hall McCormick home, once filled with art treasures gathered by the notable collector. Between the McCormick house and the home of LeGrand Burton, uncle of Burton Holmes, the famous travel lecturer, are two buildings owned by St. James’ Episcopal church, the rectory and parish house. 3

Until the Woolworth building was erected this year, the big Cyrus McCormick house, 675 Rush st., stood alone in this area. Its neighbor, the houses of Henry King at 701 and Cyrus H. Adams and William G. McCormick were razed years ago. The Rush and Ontario neighborhood was once known as “McCormickville” since so many members of the McCormick family lived there. Cyrus McCormick’s brownstone mansion, built in 1879, still stands. The old house has a somewhat disheveled look, for part of the porte cochere has been ripped off, to make room for a new structure to the north. 4

The comfortable brick house occupied for years by Mrs. William Blair at the northeast corner of Rush and Huron streets, has been razed. Mrs. Blair was the grandmother of William McCormick Blair and Mrs. Howard Linn. On Mrs. Blair’s death, John Alden Carpenter, the composer, took the house. He had been living in the narrow, white stone-fronted residence at 710, which was built by W. K. Nixon in the ’70s. A fourth story was added to the original Nixon house in the ’90s, when the Nixons were hosts to the duke of Newcastle and his entourage. Nearby are the former homes of Joseph G. Coleman, Mrs. Elizabeth Stickney, and Watson F. Blair, all prominent socially. The latter house at 720 Rush st., is now the home of the Actors’ club.5

Along the east side of Rush street, from Chicago avenue to Superior street, are several venerable houses, among them that at 741, where Col. H. A. Musham, Chicago historian, lives. The home of Mrs. Robert D. McFadon is now occupied by the Club Alabam. At the northeast corner of Rush and Superior streets, in a great brick house with entrance on Superior street, once lived, Henry W. Bishop, prominent lawyer and then president of the exclusive Chicago club. There is now a restaurant in this building.6

Our walk along Rush street comes to an end at Chicago avenue for the elegant street of yesterday ended there. So, to Quaint Little Rush street of the past, we say farewell. 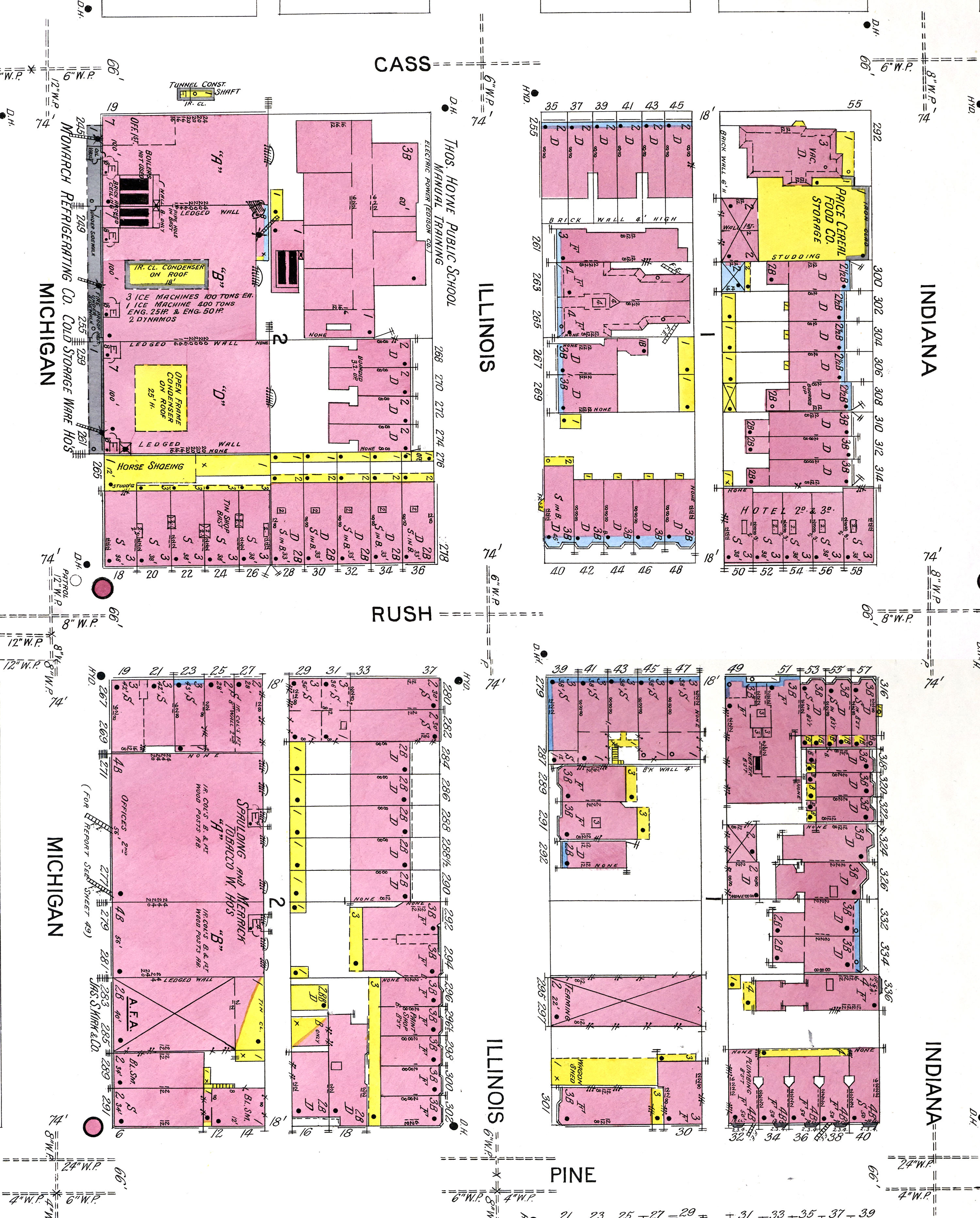 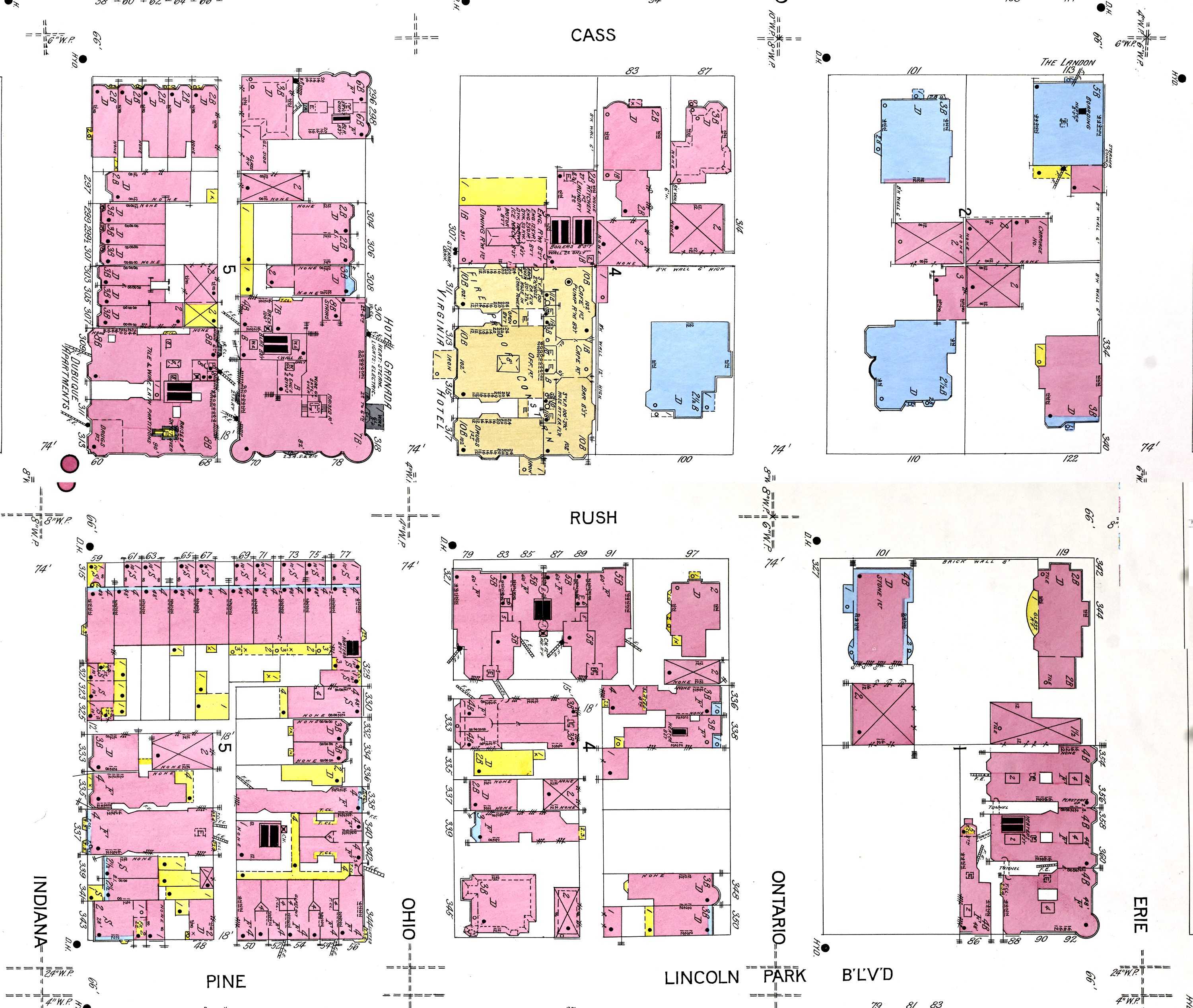 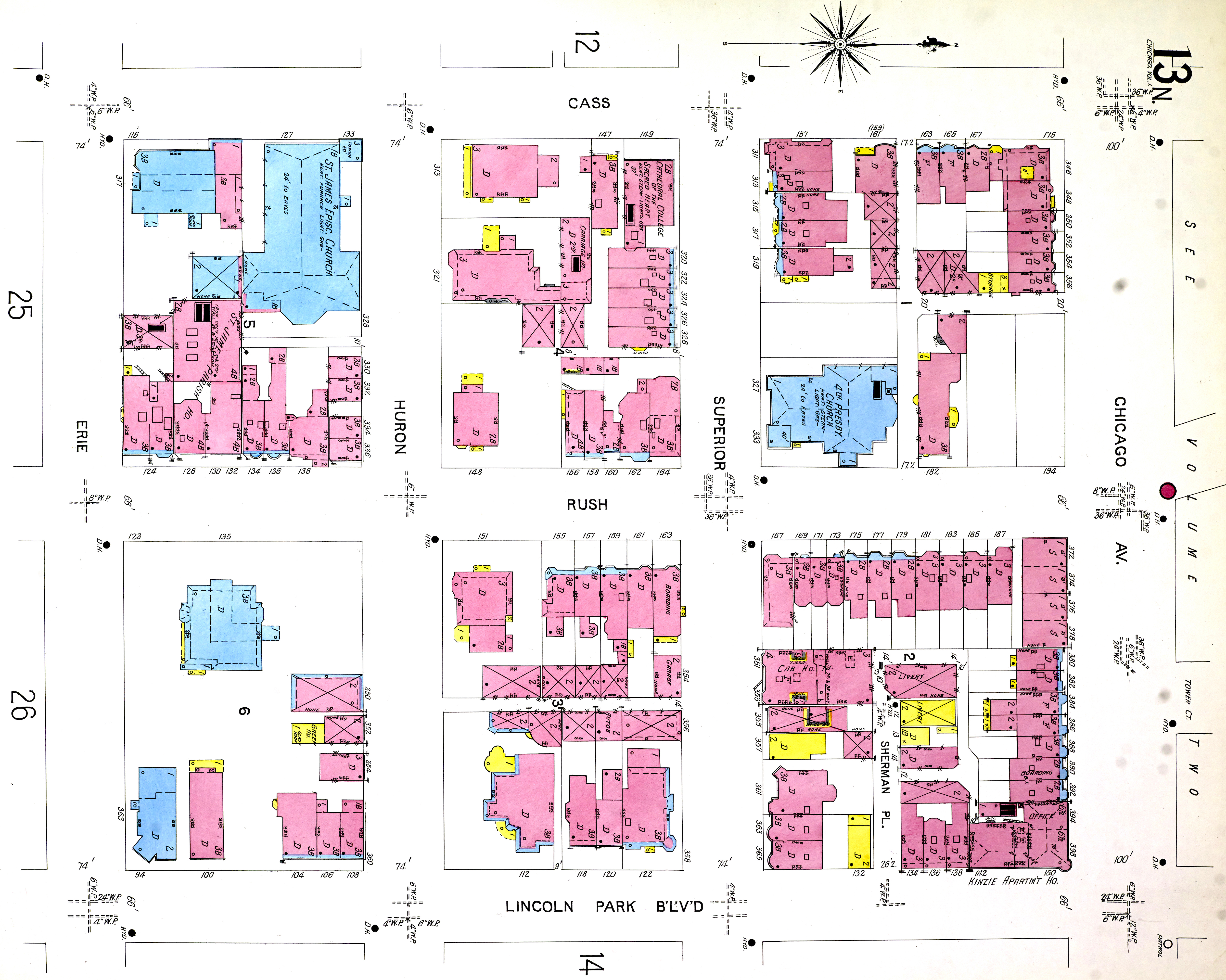 3 Paul Contos, owner of the French restaurant Chez Paul, moved into Robert Hall McCormick’s mansion in 1964 at 660 North Rush Street. The restaurant closed in 1995 and is now used for office space.

4 The first time the name “McCormickville” appeared in print was in the Chicago Tribune, August 22, 1915:

The Chauncy McCormicks are moving in this autumn to the house in Rush street that the Higginsons occupied for three years, the old William McCormick home where Chauncey McCormick was born. He has much sentiment for and many associations with the house, which is in a neighborhood which might be properly called McCormickville, as Mrs. Cyrus McCormick, the R. Hall McCormicks, the Cyrus H. McCormicks, the Robert H. McCormicks, and Mrs. Emmons Blaine (nee McCormick) all live within a stone’s throw. It is “the return of the native.

The name also appeared in the Chicago Tribune on September 26, 1915:

The young Chauncey McCormicks are furnishing and doing over the William McCormick house in Rush street in the district sometimes yclept McCormickville.

The Cyrus McCormick house at 675 Rush st., was torn down in 1954. The 100 E. Huron street condominium building, also known as Chicago Place, stands on the site today. The Henry King, Cyrus H. Adams and William G. McCormick mansions were torn down in 1949. 674-678 N. Michigan Avenue, where the Woolworth’s store stood, is currently the Omni Hotel.

6 The site of Henry W. Bishop’s home is home to Giordano’s pizzeria. 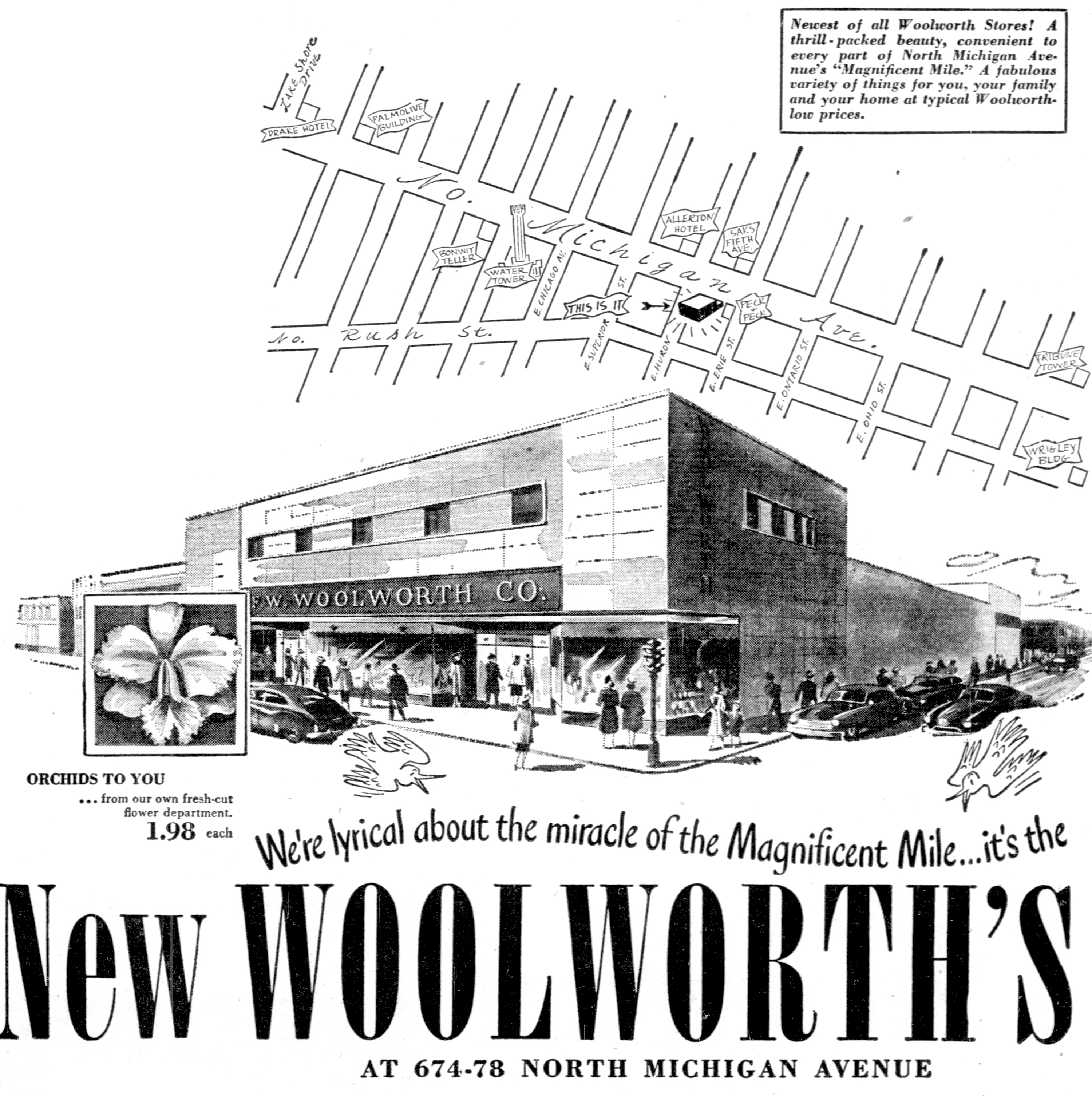 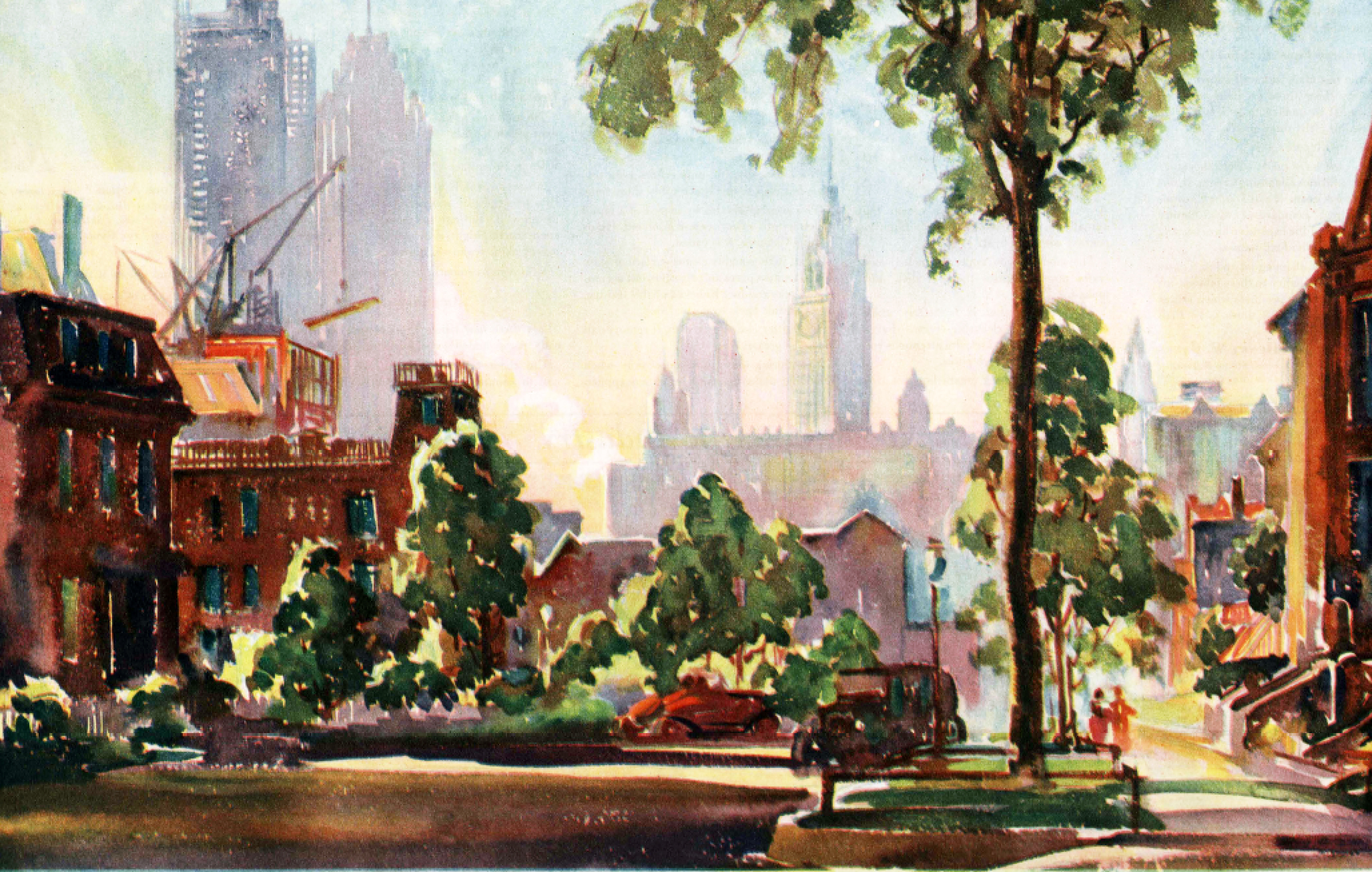 “Rush and Superior,” Mr. Richard A. Chase’s geographical title for this scene, is the artist’s story of the retreat of the age of brick and mortar before that of concrete and steel. Once sparkling and vibrant with the gayest amenities of social life. this scene was to other times what the gold coast is to ours; today the pneumatic riveter, putting together the newest near north side skyscraper, sounds its doom.