From West Lake street to West Twelfth street, or, rather, from Union Park south to the boulevard extension of West Twelfth street, which makes the connection with Douglas Park. The finest residence, street of the West Division. Elegant mansions rise on either side, from Monroe street south. There are also some handsome church edifices on the boulevard, among them the Union Park Congregational, opposite Union Park; the Third Presbyterian, between Madisonand Monroe; the Fourth Baptist, near the intersection of Ashland and Ogden avenues, and Epiphany Episcopalian, at the southeast corner of Adams street. The boulevard is a fashionable drive. It is paved with asphaltum, and is the most perfect roadway in the city. This boulevard connects Washington with Twelfth, thus completing a circular drive which includes Douglas, Garfield and Union Parks. 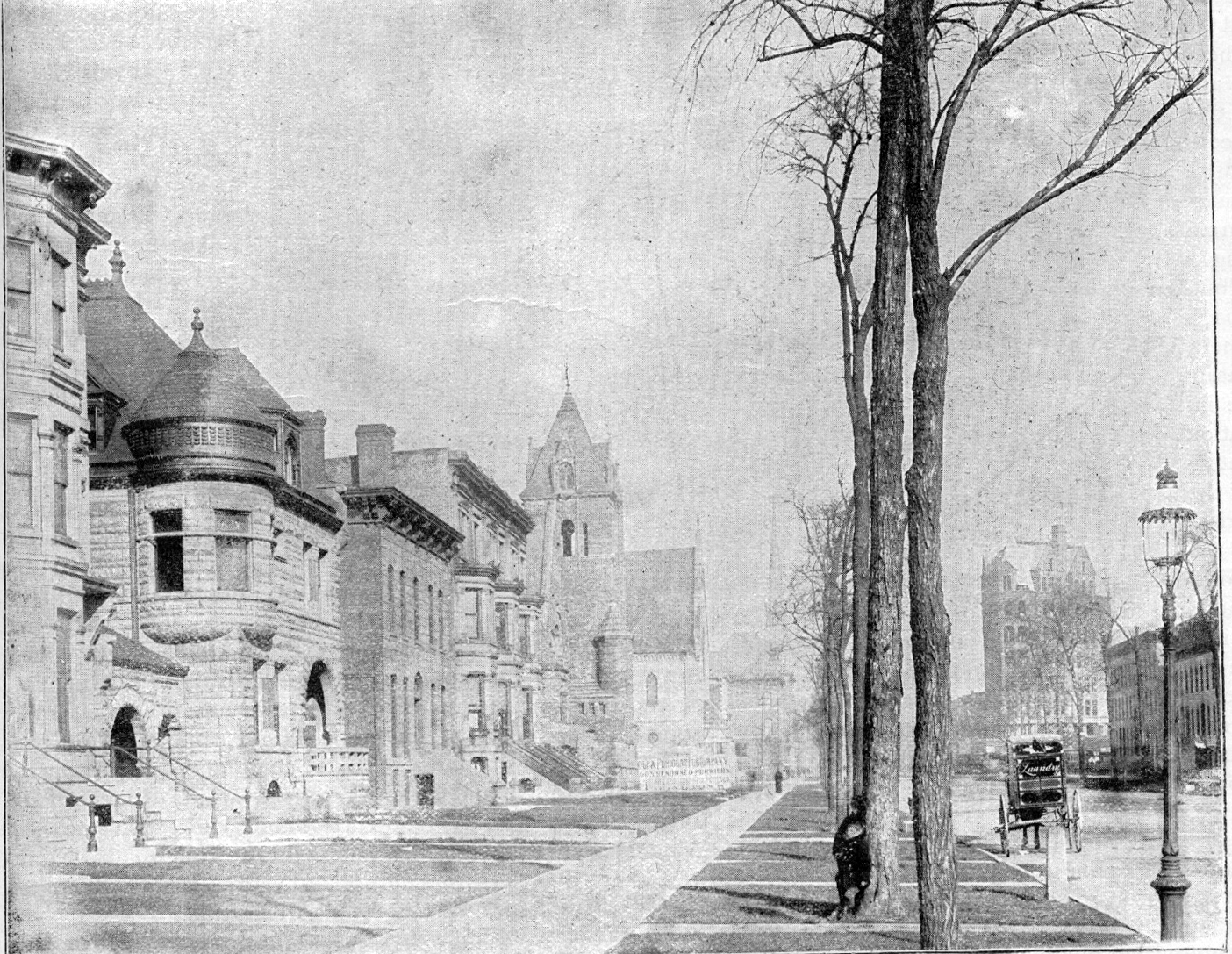 Ashland Blvd is the finest residence street of the West Side. Not, however, until we reach Harrison st. to the north do we pass the handsome residences. We can see the County Hospital to our left, and the various medical colleges which surround it. We also see the beautiful Presbyterian hospital. All of these places are described elsewhere.

At 512 on Ashland ave. we see the home of Joseph Hirsh; at 510, the home of Frank Slavik; at 478 resides William Laflin; at 442, James Baggot; at 438, Rev. J. W. Jackman; at 436, Max Eberhardt; on the opposite side of the street we are passing the residences of F. D. Ketcham, W. P. Ketcham, O. W. Holmes, James Maxwell, E. P. Wilce and Thomas N. Bond. At 398 resides Heaton Owsly; at 356, George B. Kane; at 339, John McLaren; at 329, Charles T. Nash; at 325, George Sherwood. Moving northward, and passing many elegant residences, we come to the residence of Carter H. Harrison, four times mayor of Chicago, up to the present writing. This is a spacious but old-fashioned dwelling. The number is 231. In this vicinity are the homes of Chas. Goodman, Frank Reilly, William Ridgeway, Charles F. Elmes, Leonard C. Riggs, S. A. Scribner, J. Harley Bradley and other well-known people. At 196 resides William A. Pinkerton. Not far from here, in that elegant residence to the right, resides M. C. McDonald. On the opposite side of the street is the mansion of Charles H. Case. Further up, at 132, is the home of James B. Tascott, the father of Willie Tascott, [See Snell Murder.] The Rev. J. L. Withrow resides at 149; to our left, and from this point to Madison st., there are a number of stately residences and fashionable boarding houses. Crossing Madison st. we pass the Congregational Theological Seminary and the popular and fashionable Union Park Congregational Church. On our right is pretty little Union Park itself, and through the trees we can see ” Ghost Row ” on Ogden ave. and Washington blvd. extending toward the east. We turn our backs upon Union Park and drive west From this point to Garfield Park 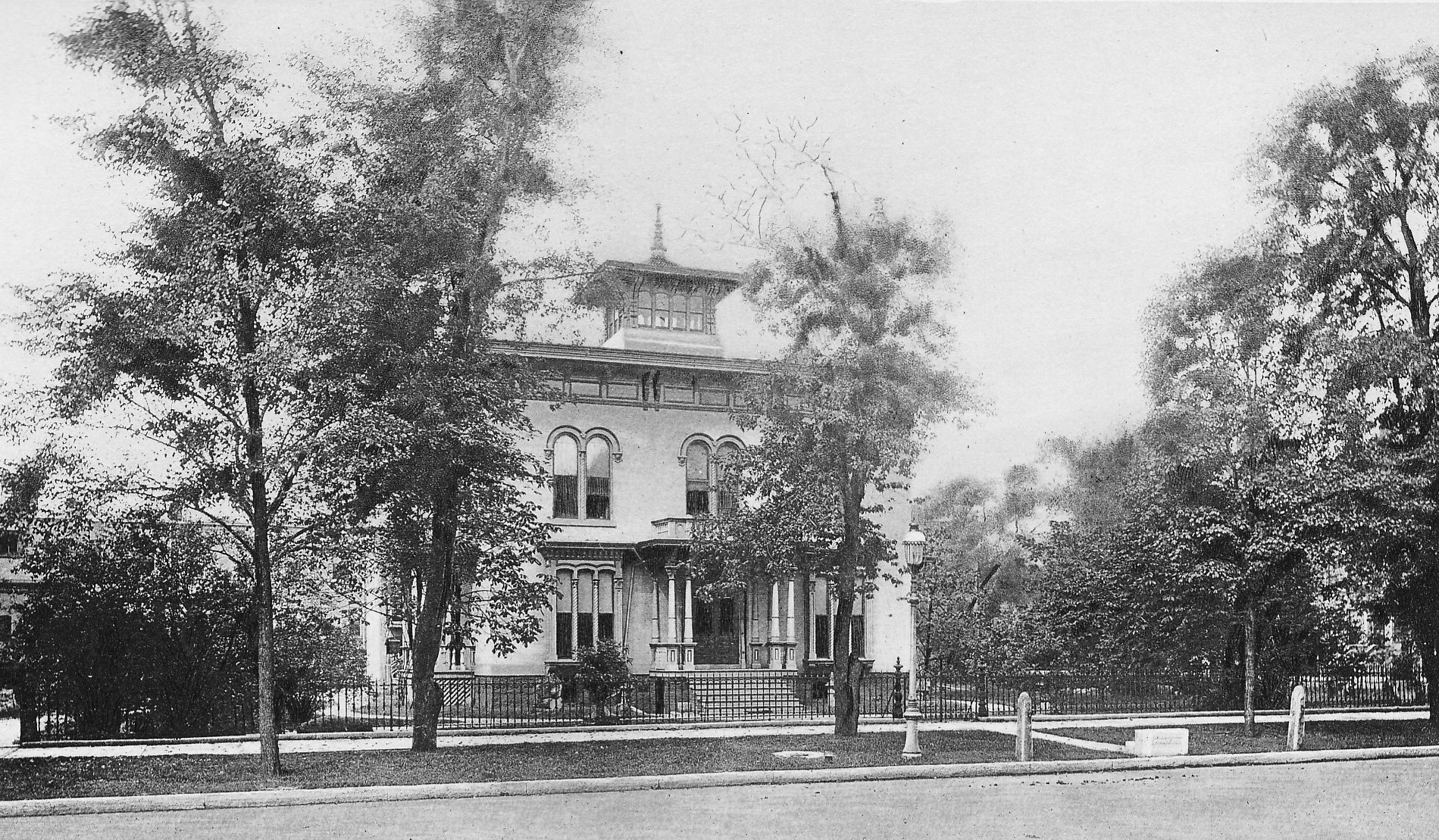 Ashland Boulevard, a cut of which appears below, besides being one of the handsomest residence streets in the West Division of Chicago, has been improved under the direction of the West Chicago Park Commissioners (under whose control it is, as a boulevard), in a manner which shows the highest perfection in the art of street-paving which the ingenuity of engineers and experts has yet been able to devise.

From Lake Street on the north to Twelfth Street on the south, and covering a width of fifty feet, the pavement is practically a monolith, except where intersected by street car tracks. It is a sheet asphalt pavement made from Trinidad asphalt, and was laid by The Barber Asphalt Paving Company in the summer of 1888, and It now, after four years of wear, presents as smooth, uniform, unbroken and handsome an appearance as it did when first laid. It is particularly attractive to the residences on this pleasure-way for a variety of reasons. First in order is its smoothness. The business man who drives to his office in the morning, reads his paper while seated in his coupe in passing over this street and Jackson Boulevard, which is paved in the same way, with the same ease as though seated in a vestibule car. To the housekeepers it is a source of delight because of its absolute cleanliness. Mud and dust are strangers to this street. Two or three men employed by the Park Board, armed with broom and barrow, keep the pavement always as clean as the scoured steps leading to the beautiful homes on either side. Its noiselessness is by no means its least merit. On sunny afternoons when this pleasure-way is thronged with equipages, no rattle and roar which are usually associated with a largely traveled street, disturb the residents or passers-by. The wheels roll over the pavement noiselessly, and only the muffled click of the horses’ feet is to be heard. 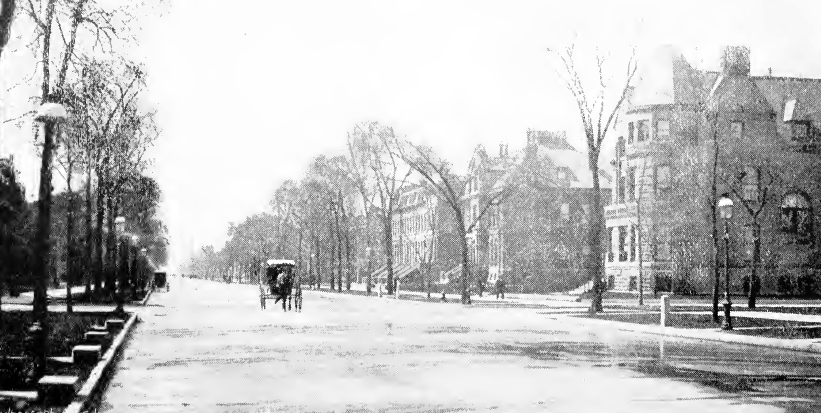