“Where does the geographical center of Chicago lie?”

Not one in fifty among those who know the city best can answer the question with any approach to exactness. Even those who have watched and been concerned in Chicago’s growth have difficulty in making a rough mental calculation as to its position. The most thoroughly informed would hesitato to place it in the middle of a cow pasture, and yet it falls in one, or in some-thing very like it.

The center meant is that of the area inclosed by the city limits-not the center of population. Here are guesses as to its position by three men familiar with the city, living one on each of the three sides—North, West, and South:

The first two are representative answers and show the general belief, which is considerably wide of the mark and places the center too far north. The third is remarkably close—the closest made. It is but two blocks out in either direction. 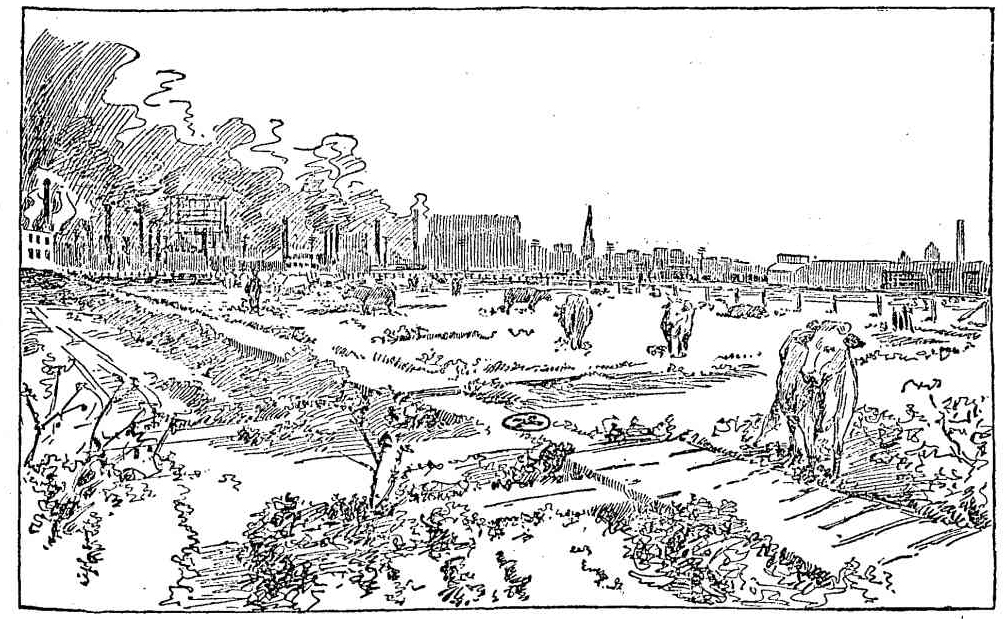 GEOGRAPHICAL CENTER OF THE CITY OF CHICAGO.
[The cross shows the exact spot.]

The geographical center of Chicago falls on the exact center of the crossing on the west side of Carlton street, at its intersection with Thirty-seventh.

“It may be ten feet one way or another from this point,” said Supt. Wullweber of the Bureau of Maps, where the calculation was made, “but it will not vary more than that; I can make the assertion with confidence. The point may be taken as the exact center, for it is as near as it can be calculated. Our figures show it exactly in the middle of the crossing’

Tho remarkable thing about the position of the center is that It occupies one of the incongruous spots possible. One naturally expects the center of a large city to fall in a of tall buildings and heavy traffic. But the center of Chicago is removed from these things. Carlton street is one block east of Ashland avenue, a fact which becomes important when one is searching for the thoroughfare, for without knowledge of it Canlton street, might never be found. It is in the region west of the South Branch of the river devoted to mills and lumber yards. Nortth and west of it are saloons, stores, and the one and two story houses in the mill hands and laborers live. South and to the east along the bank of the river rise the smoking chimneys of the mills.

The immediate neighborhood of Carlton street, however, is guiltless of mills, saloons, or cottages. The street lies in a wilderness of thistles and weeds, which have choked out the stringy grass, and is marked only by an uneven plank walk. There are signs that it has been graded, but there is no pavement, and the rise in the center is lost under a growth of weeds, are never troubled by wagon wheels. It is in the center of a space three blocks long and two wide in which there are but five buildings: two dwellings, a saloon, the School of the Apostles Peter and Paul, which owns the land closest to the crossing, and a tiny fruit store. Paths across the fields show the roads taken by the workmen on their Way to the mills, but the greater part of the time the place is devoted to the pleasures and necessities of numerous cows, which wander at will over the fields, the road, and the walk. It is like numerous other unbuilt-on spots scattered through the city, spots which sometime will make the owners rich, but which at present are weed-grown wildernesses. Still, it seems a most remarkable place for the center of the second largest city in the United States.

About the spot the 180 square miles of the city are evenly distributed, though most of the business interests and a great share of the residence portion lie to the north. The center lies considerably south of the position generally assigned to it. Few persons realize the immense amount of land brought within the city limits when they were extended to take in Hyde Park and the districts south and north. At the time of its annexation Hyde Park was the largest village in the world, and its admission sent the center of the city’s area south with et jump. The addition of the suburbs to the north did not more than partially balance it, and from a position in the neighborhood of Harrison street the geographical center leaped to its present position some miles south. To most people, however, Madison street still bisects the city as it does the business district. The distance of the center from the lake is not so great as is generally supposed. To the north the city stretches well to the west, but as it runs south it holds pretty closely to the trend of the lake shore, and to the southeast. The great stretch of land along the south shore counterbalances the effect of the districts to the north, keeps the center close to the south branch of the river. 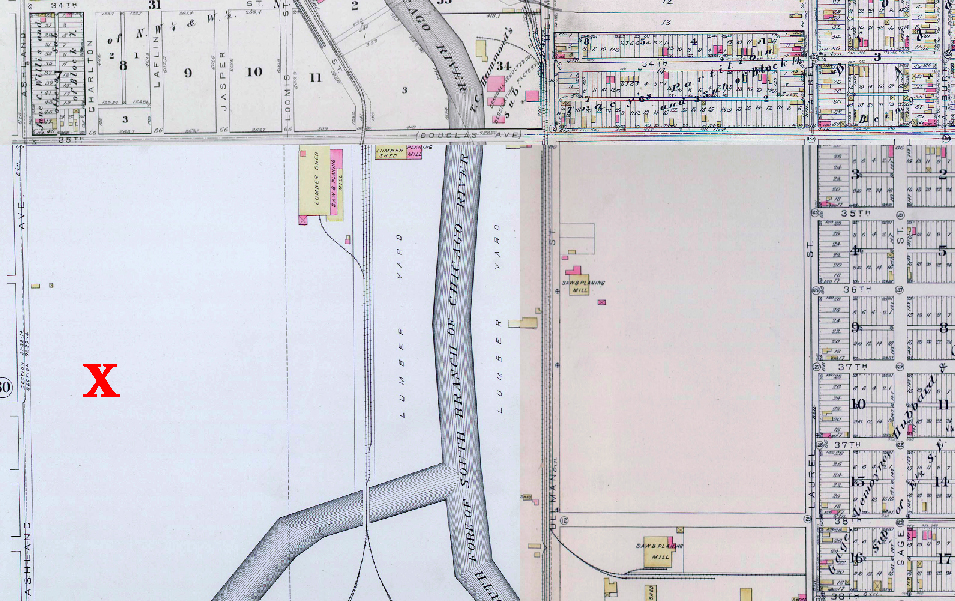 How closely this position corresponds with that of the center of population can only be guessed at. There has been no recent calculation of the latter point, but a rough estimate by precincts shows a position somewhat to the north and slightly to the east of the geographical center.

The computation of thei position of the city’s center was not an easy one. Not only does the uneven shore of the lake make perfect calculation of areas difficult, but Chicago, being unrestrained by any natural obstructions, has spread out to the west and south in anything but a regular form. An easy way to calculate it approximately, however, is to divide the city into squares, find the center of each square, and the center of the centers, by the methods given in the schoolbooks for the calculation of the center of gravity. An easier way still, though far from an accurate one, is to balance a small, stiff map on the point of a pin. The point where it balances perfectly must be the center.