Saturday evening on North avenue is a family affair. The father of the house comes along, the work day worries of the week forgotten. The mother of the family is there in her second best appointments, bare headed, if the weather is not absolutely cold, and bent on Sunday shopping. The children are all there, hand 0n hand, a little human set of sausages.

The windows of North avenue make your mouth water. There are beautiful beefsteaks and delectable chops and brilliant carrots and apples and purple cabbages. Family entrances peek out at you from every corner and the dealers have above their “homey” shops such signs as “Complete Home Outfitters.”

The children play about. North avenue is the home of the children. They come from miles and miles around and rally in the street among the cars and wagons. They run at games among the elders on the sidewalks. They dash in and out of shops and department stores. From the minute that school is out they swarm in the street and their mothers are not afraid.

“O, she’s all right. She’s just over on North avenue somewhere playing.” The avenue is the the street that is just like home. 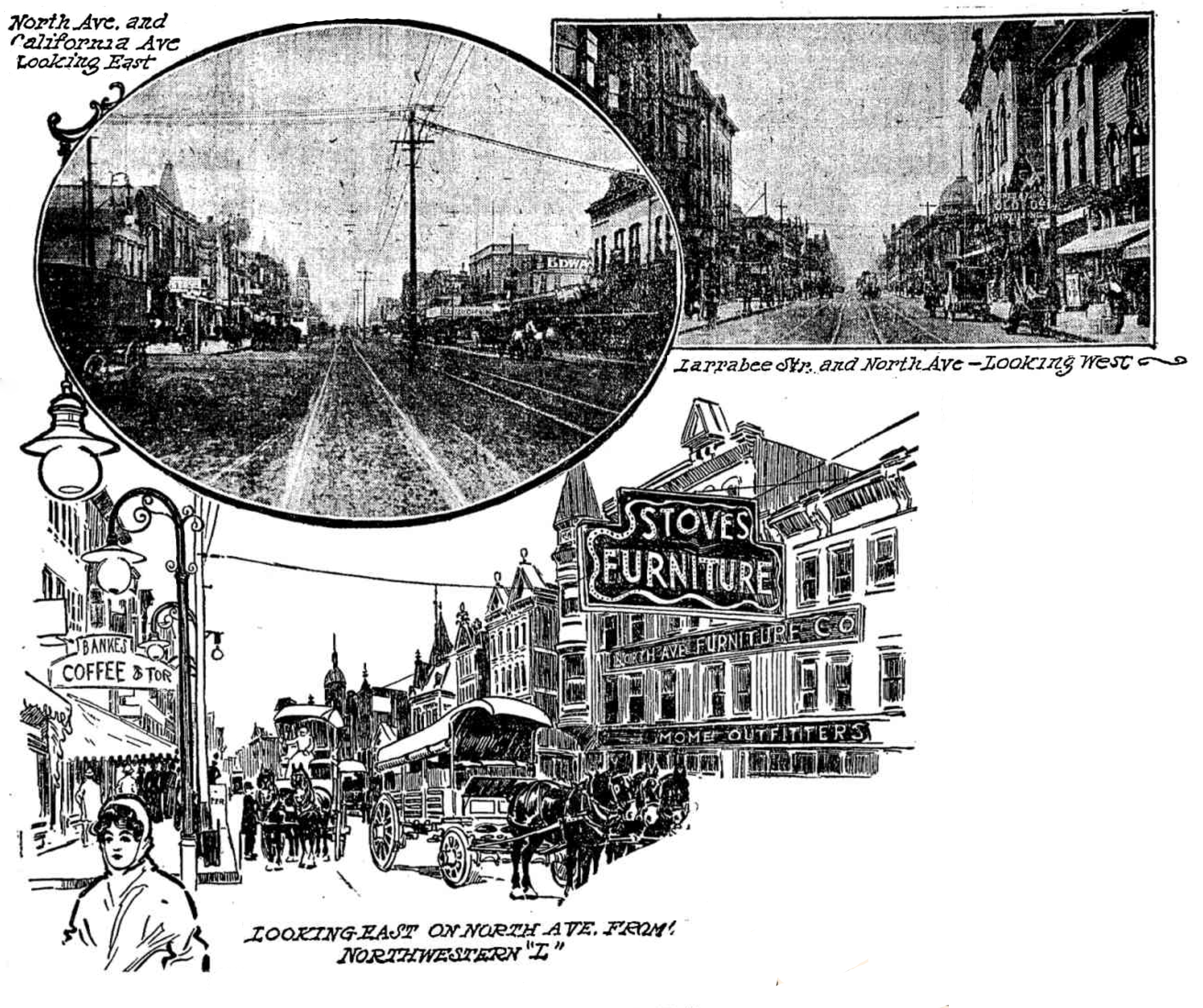 “As German as North avenue” used to be a familiar figure of speech. The avenue was the main highway to the northside Germans. To the south of it were Schiller and Goethe and Germania streets, where the stranger from the fatherland did not have to drink two steins to take himself back in the old haunts. But as time has gone on the street has reached out to the westward—it now has the distinction of being not only the business street of the north side, but a business street of the west side also. And while the street east of the river is still German, the street to the west is Scandinavian or Swedish, to be more exact.

The business life of the avenue may be divided into four centers. Between Sedgwick and Halsted is the heart of the old north side German life. Here the merchants are nearly all of German descent and the crowds that pack the streets at time notably on Saturday night, are largely of Germanic strain. Here is a street with a distinctive atmosphere, an intermingling of social relaxation and business that may perhaps not be equalled else7in the city. 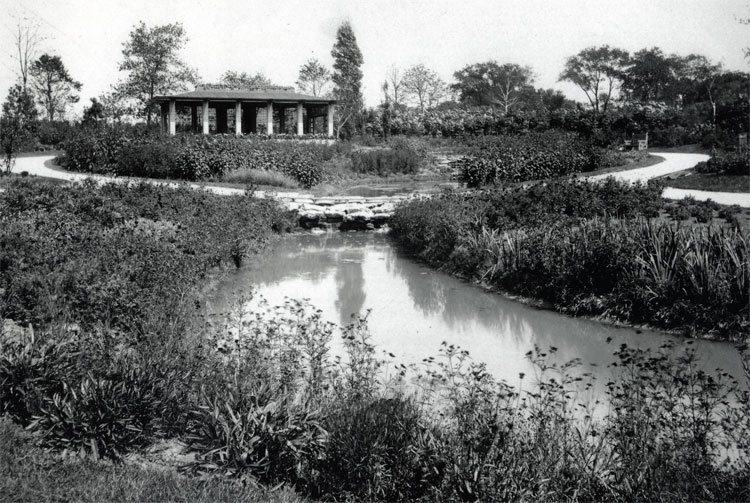 Further west, near Humboldt park, we come upon a second and extremely prosperous business section, between Clairmont and Mozart streets, or to define it more closely and by better known streets, between Western and California avenues. Here the Scandinavians predominate. From Western avenue. westward the street is wider, sixty feet from curb to curb. Here the atmosphere is that of any of the thriving, growing west side streets. Rents are going up and people are packing into the territory. What is busy now with the extremely busy in five or ten or fifteen years.

Westward again North avenue buds and hustles from Kedzie to Lawndale. Frontage values are high, vacant places and unsightly shacks have vanished from the street, varnish glistens and business thrives.

Westward with the imperial constellation, the avenue arrives at further business glory at Fortieth avenue1. Here for several blocks is another mercantile center which has already arrived and which still has most of its future before it. The thrifty business the Swedish merchants along here are rolling up bank accounts while the mortar still sweats in their walls and the principal traffic along the street is the cartage of bricks and planks for the home makers.

At the of the car line, Forty-eighth avenue2, is another prosperous new community. Here the car barns have just been finished and have brought with them the families of 500 employes, probably 2,000 persons, an immigration that cannot fail to impress itself upon the street. A new chair factory and other employments are adding to the call. The whole of the avenue from Fortieth avenue west has been making strides and bounds within the last twenty-four months.

North avenue brags of three perfectly good and live business men’s associations. First and oldest of these is the North Avenue Merchants’ Association, which rules the street between the lake and the river. Here Arthur Jossetti is president, William Schrader vice president, William Boeddner secretary and Charles Schick treasurer. This association was organized ten years ago, to take up the work of the defunct North Side Merchants’ association, probably the first business men’s organization in the city outside the loop. The association now has 100 members. It has had street celebrations for nearly ten years, taking for itself the term, “Great White Way.” So long ago as 1905, it put in a set of private street lights and claims to be the pioneer in the form of public enterprise. It has succeeded in working many reforms in the older section of the avenue.

Between Western and California avenues the West North Avenue Business Men’s association is working for the common advantage of its merchants. Dr. Oscar L. Peterson, president of the association, died March 28 of this year. Dr. F. E. Bisewski is vice president, John Hessler secretary and L. A. Leistikow treasurer. This association has a large membership and has been in existence nine years. Its greatest victory has been the removal of obstructive buildings which formerly nearly closed the street. It has been working on transportation problems, east and west, and other improvement measures.

North Avenue
Published by Arno B. Reincke
Circa 1916

Avenue Under Careful Guidance.
The third association is called the West North Avenue Business association, and its home is Fortieth avenue. A. H. Greenburg is president, and J. M. Reines secretary and treasurer.

There are several other organizations interested in the street, among the Kedzie Avenue Improvement association and the Northwest Side Merchants’ association, centering on Milwaukee avenue. The crossing of Milwaukee avenue, Robey street(sup>3 and North avenue, by the way, is one the liveliest intersections on the street.

Street car problems have played a great part in the history of the avenue and its business men are congratulating themselves that they are at last on the point of success. North avenue cars do more business than any other north side cross town transportation. But until six months ago they were of the small family party type which is now to be found only on the outskirts of the city. Until the new bridge was built two or three years ago larger cars could not be run, and since then there has been a problem of railway track crossings. Now large cars are running, though not of the latest type, and it is hoped the pay-as-you-enter will soon follow.

The other problem is the western extension of the Metropolitan “L” along the street. The Humboldt park branch now parallels North avenue as far east as Milwaukee, and the Northwestern “L” also gives it three stations within half a mile. All the surface lines that want to get to the north and the west sides must cross North avenue and give it service. These include all the Clark street cars, the Wells-Sheffield, Wells-Ogden, and Rosehill cars on Wells street, the Sedgwick-Dearborn, Larrabee street, Riverview park, Clybourne avenue, Southport, the Halsted lines, Elston avenue, Ashland avenue, the Milwaukee avenue lines, Robey street, Western avenue, Californium and avenue, and Grand avenue cars. 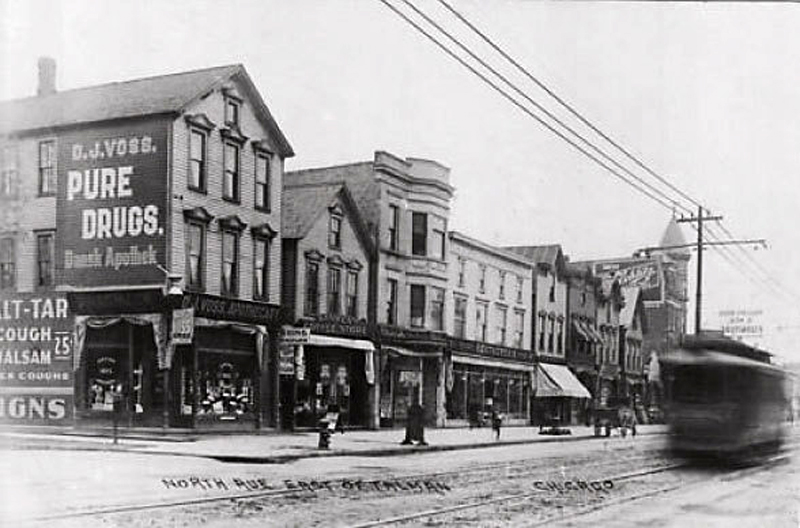 Take Highway from West Side.
North avenue touches two parks, Lincoln and Humboldt. It is the southern boundary of the famous old lake front park. On hot summer days the intersection of Clark street and North avenue is one of the liveliest transfer points in the city. Here come thousands of mothers bringing the babies for a breath of lake front coolness. The Augustus Saint-Gaudens statue of Lincoln, the gift of Eli Bates, face North avenue at the end of Dearborn street.

North avenue begins at the Lake Shore drive with the new home of R. T. Crane, Jr. At Clark street is an eight story hotel, the tallest building on the avenue. Facing the park is the residence of Archbishop Quigley. The lawn of this residence has been siad to be the most expensive vacant residential building site in Chicago.

North avenue crosses the river at the north end of Goose Island and is here the north boundary of the industrial center. The avenue is the north boundary of Humboldt park, passes through the old settlement of Wicker park, bounds the Town of Jefferson on the south, is the city limits north of Oak Park, and follows the section line between the towns of Leyden and Proviso westward to the county line. The avenue divided the Twenty-third ward from the Twenty-first and Twenty-second on the south, cut through the Sixteenth ward, and divides the Fifteenth from the Twenty-eights, and the Twenty-seventh from the Thirty-fifth.

Rapid Growth in Population.
It passes through some of the city’s densely populated territory. The heaviest population is between Ashland and and the river. Between Halsted street and Sedgwick and between Ashland avenue and Robey also are closely peopled sections. In 1902 the population along the street west of Fortieth avenue ran only from two to five to the acre, as that it can seen how great and hiw rapid has been the development here.

St. Michael’s church and school is a point of interest on North Avenue at Hudson. This parochial school now enrolls 1,500 children. The Germans who first settled the street were almost all Roman Catholics, and its greater part of the residents are still so. Near the avenue also is the Church of the Immaculate Conception, which owes its location to the Irish Roman Catholics, who first settled the avenue east of Sedgwick street. Hungarian Germans are settling along Larrabee street, and the population is becoming mixed. In the territory south of North avenue, west from Ashland many Jewish families are moving out from the Halsted street center, which they have outgrown.

Here and there along the avenue are theaters, among which may be mentioned the Plaza, Sittner’s, the Janet, the Orchard, and Crystal. They are home theaters, for its a few streets would you find so large a percentage of children in the audience. 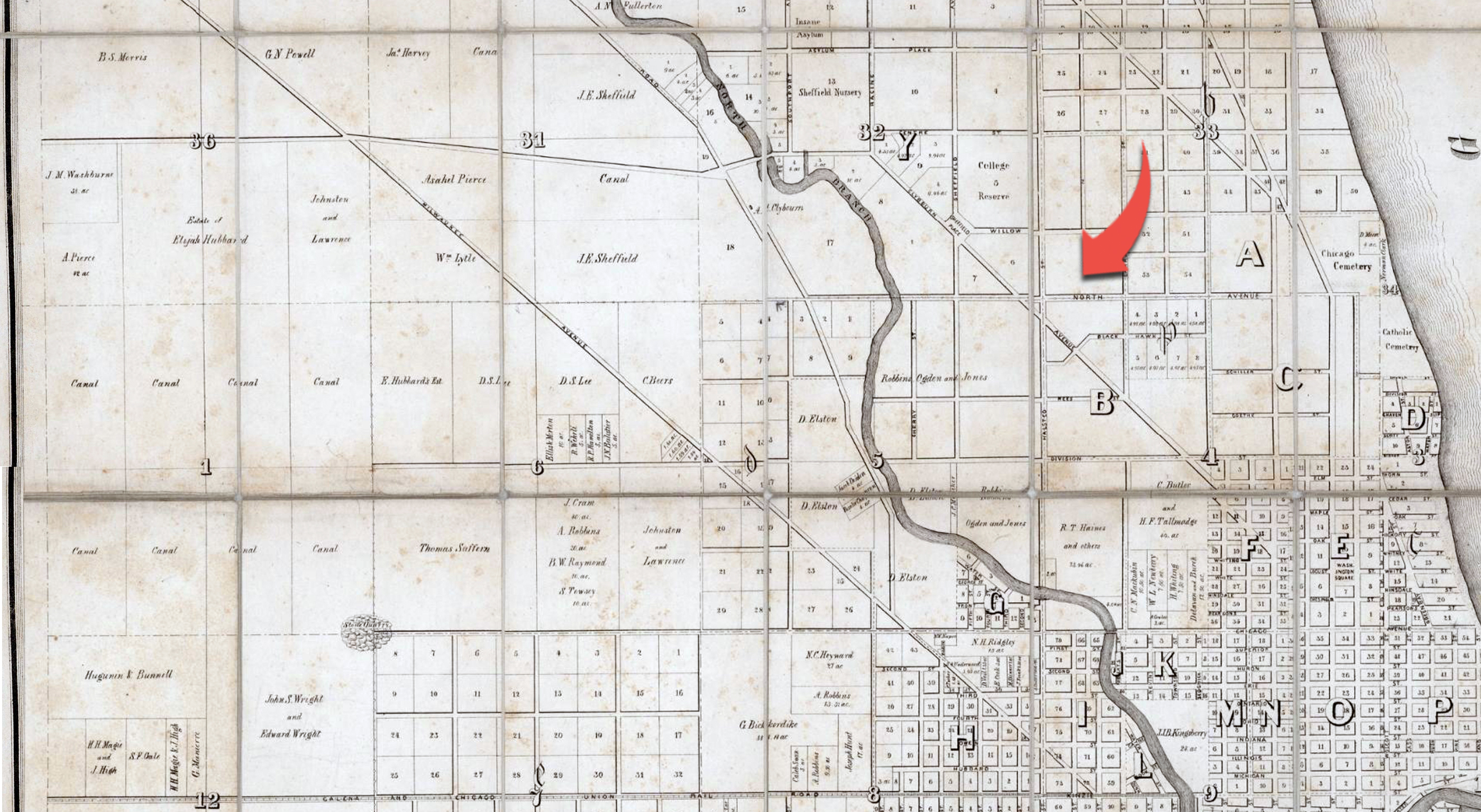 NOTES
1 40th Avenue has been changed in later years to Crawford Avenue and is currently Pulaski Road.
2 48th Avenue is now Cicero Avenue.
3 Robey street has been renamed Damen Avenue. 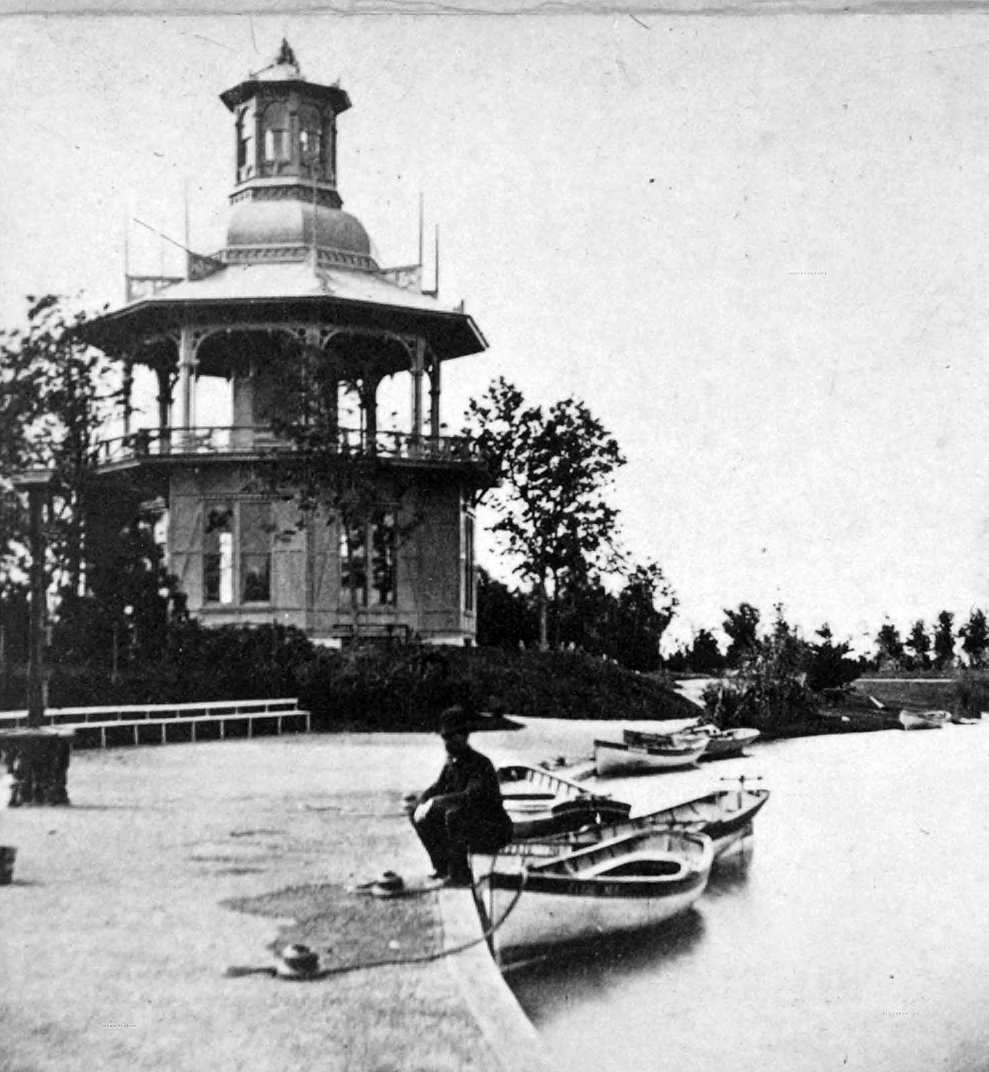