Touring Routes Near Home; How to Get Started

A MAJORITY of motorists who plan tours into the country usually have well defined ideas as to the direction tn which they intend to travel and know what towns are to be paseed through en roule to their destination. Most of them, however, became confused in following the maze of streets and boulevards leading out ot the city, and it is for the benefit of such motorists that these suggestions are intended. 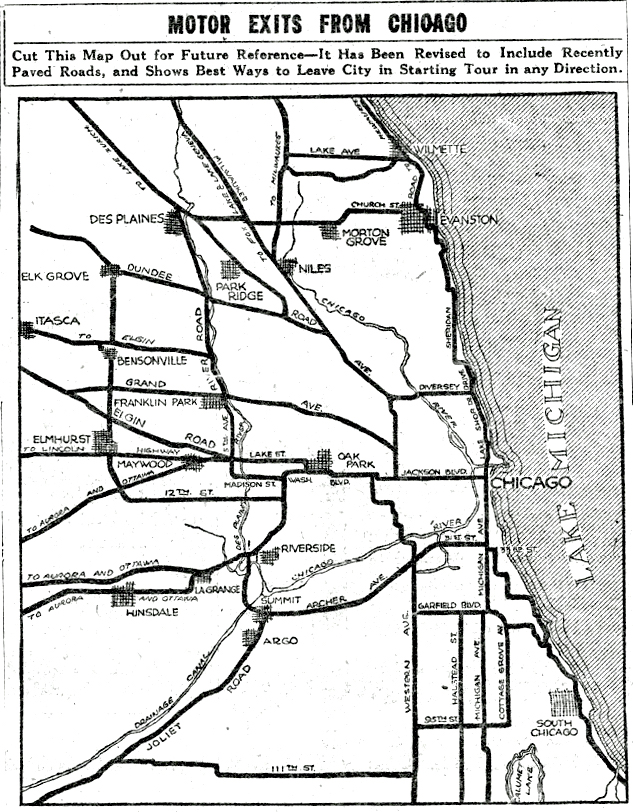 Exits from Chloago have not been so good in several years as they are at the present time, owing to the construction work that hae been carried out especially to the north and to the south. Western exits also have been improved, so that it is now possible to leave the city in almost any direction and with very little trouble. A few sections of the Cook county roads are closed for concreting, but in most cases fairly good detours have been marked out around the barred zones,

To the north there are flve principal exits. Of these, the one most commonly used is Sheridan road, which runs through the lake shore suburbs to Kenosha, fifty-six miles. Radiating from Sheridan road are several highways that lead to points northwest of Chicago. With completion of the paving work through Winnetka, Kenilworth, and New Trier, Sheridan road may now be used from Lincoln park through all of the north shore suburbs wlthout, twisting and turning through Evanston and Wilmette, as was the case when Sheridan road was in such a rough condition.

At HighLand Park the main northern route continues through Waukegan, Kenosha, and Racine to Milwaukee, while other branches lead to Lake Geneva, Fox Lake, Gray’s Lake. and other resorts of northern Illinois and southern Wisconsin. Another popular northern exit known as the inside route to Highland Park and is considerably used by motorists who on fine Sundays when the traffic is heavy on Sheridan road. prefer to take the less traveled way, Take Railroad avenue at Evanston, meet Green Bay road, and continue to Highland Park.

Still another, but a longer way. is to take Lake avenue in Wllmette straight west about five miles to the end of the road north of Glenview. At this point turn north through Northfield and Deerfield and then east to Hlghiand Park. For those who wish to drtve to Kenosha, Racine, or Milwaukee and who wish to avoid the sandy, rough road along the lake shore, the Deerfield route may be used,continuing north through Everett. Still another option is offered by going to Milwaukee from Deerfield through Half Day. Libertyville. Gurnee. Sylvania, and Killbournville. At the present time the shore route Is the best of three wretched routes to Milwaukee, but later in the season. when the shore route Sand dries out, either one of the inside routes to the Cream city will be preferable.

Milwaukee avenue undoubtedly will be called upon to carry a tremendous amount of northern traffic this summer. The thoroughfare consists of concrete from the city limits north to a point just beyond the House That Jack Built, on the Desplaines river. Milwaukee avenue is reached by going through Lincoln park to Dlveraey boulevard and then going west, crossing the rIver and taking Logan boulevard to Logan square, where Milwaukee avenue is picked up and followed northwest. Another and a very good way, is to take Sheridan road to Addison street and then drive west to Milwaukee avenue. There is a break In the avenue between the river and where the road is blocked for conatructton work.

Those going to Wheeltng and other points that way should turn right at the House That Jack Built, go to the Dundee road, and then turn left to Wheeling, again coming on to Milwaukee avenue, From Wheeling the tourist may continue through Half Day and Llbertyville to the Fox Lake district, or may reach Fox Lake. Lake Geneva, and other resorts by traveling the dirt road through Diamond Lake, Ivanhoe, and Volo. A better way to reach Lake Geneva, however, is to go from Wheeling through Buffalo Grove, Long Grove, Wauconda, Ringwood, and Hebron. Of all the routes to Lake Geneva, this latter one is recommended the best.

Before dropping the detail of northern exits the Desplaines river route should not be overlooked. This route, comparatively little used, is a pretty one and runs north from Maywood along the river through Franklin Park and Desplaines to Wheeling.

Points in the Fox river valley are reached Over several exits. For Elgin the tourist has his choice of two direct routes and a couple of roundabout ones. The way most used is to go out Washington Park north to Lake street, and straight west through Addison, Bloom!ngdale, and Ontarioville to Elgin. This road is a section of the Grant highway and most of it is marked with yellow and black bands on the poles. An optional route. and a good one, is from Maywood through Bensenville, Wooddale, Itasca, and Roselle. The main route to St. Charles.from which other towns along the Fox river may be reached. runs out Washington boulevard. Madison street, Fifth avenue, MayWood, and the St. Charles road through Maywood, the edge of Elmhurst, Lombard. and North Glen Ellyn. The Lincoln highway, which touches at Geneva, may be reached via the same route. which continues from North Glen Ellyn through West Chicago, Geneva, Rochelle, Dixon, and thence through Clinton to the Pacific coast.

Another Fox river valley town, on the Lincoln highway is on the Starved Rock trail route,. It is best following the Starved Rock carriages from the end of Washington boulevard to Madison street, to Mywood, to St. Charles proceed then on through Naperville.

The roads that exit from the city south carries the heaviest automobile traffic of all the routes out of Chicago.

There are several ways of leaving the central district of Chicago. The most common one is to drive south in Michigan boulevard to Garfield boulevard through Washington Park, to Cottage Grove avenue, east in ? south and east through the park which is left at its extreme eastern boundary at Lake Michigan. Follow South Shore drive, left through the South Shore Country Club, and right, still in South Shore Drive, hence to Eighty-third street, turn in two blocks and join trolley, angling ? in Burley and Buffalo avenues to Ninety-second street. South ?. Turn left, cross bridge over the river and follow Ewing avenue through to Indianapolis avenue. Turn and follow concrete and brick pavement. At prominent five corners crossing Wolf river, turn right follow trolley and take concrete road across Lake George.

Several routes radiate from this point Going straight ahead across several railway tracks to Ridge road, turning to the left, or east, through Hobart, Valparaiso, Laporte, South Bend, and all eastern points are reached. By crossing Ridge road and continuing south to Dryer, the Lincoln highway is picked up and followed through Merrilville, Ainsworth, Valparaiso, Laporte, South Bend, Fort ? and thence to the Atlantic ocean. By continuing from Dryer south, the highway is followed through LaPoint and Lafayette to Indianapolis thence to any point the heart desires.

Gary, Michigan City, St. Joseph, and other Michigan resorts are the objective points, the tourist, after crossing Lake George, should use caution past the first four corners. Turn on G? street and drive east through East Chicago, Calumet, Gary, and then on to his ?.

The Dixie highway, which goes to the south is routed out of Chicago through Western avenue through Hazel Crest and Homewood. But the Dixie highway is closed through Hazel Crest due to work of laying concrete is commenced and so a detour is necessary. It is advised to take Halsted street (following Egyptian trail markings) to Harvey and then take Park avenue to Homewood and thence on. The Dixie highway is to be closed tomorrow near the Idlewild club, one mile south of Homewood. After today, motorists should detour on Flossmoor toad west to Western avenue and then continue south.

Providing Joliet is the objective point the tourist may take Michigan avenue to Thirty-first street, continuing to Archer avenue and following that thoroughfare through Summit, Argo, Lemont, and Lockport to the prison city.