A Half Century of Chicago Building

IT IS stated from careful estimates based upon actual count that there are over 237 pedestrians and 102 vehicles traversmg the streets in the limited space between Randolph Street and Rush Street bridge on Michigan Avenue and its intersecting streets, every minute of the day between the hours of 7:00 A. M. and 6:00 P. M.

It is almost beyond comprehension how the residents of the North Side could have tolerated so great an inconvenience for more than 25 years.

The suffering from the haitus—the rough and hideous blank that exists between the North and South Side Boulevards is by no means confined to the North Side Residents; it is borne by a great majority of the business people in communicating with their places of business.

All Chicago agree that some plan for a Connecting Boulevard, should be developed and executed; what the people demand is an adequate uninterrupted means of communication that can be expeditiously executed at the least possible cost to the Citizens of our Great Metropolis. It therefore behooves us to bring before you a possible and expedient measure of relief.

Look at the picture of Grant Park, and the Lake Front Parkway, as shown opposite, with their attractive and practical connections with Michigan Avenue, by artistically designed viaducts over the Illinois Central Railroad Tracks (which railroad we hope will be electrified in the near future) at 12th Street, Peck Court, Harrison, Van Buren, Monroe and Randolph Streets, in order to fix clearly in your mind the relation as embodied in the plan, which presents one of the most magnificent highways in the world.

Outlet for Grant Park
Note particularly also, that the design here shown furnishes an inexpugnable, permanent, simple, economical and highly efficient connection between the North and South Park Systems, possesses innumerable artistic possibihties with its practical utility preeminent, and secures results for the people without legal delays, or needless procrastination.

You will also see that without the connection as shown in this plan; Grant Park entirely excluded from Park Boulevard Systems, and the attractive and expensive (Ohio Street) Lake Shore Drive extension of the Lincoln Park Boulevard Systems is left inaccessible and without an outlet to the South.

The plan provides an adequate front door to Lincoln and Grant Parks and eliminates entirely the infelicitous hinderance of light traffic which now so commonly occurs by open bridges and traffic congestion in the vicinity of Rush Street Bridge.

Chicago’s Best Opportunity
This plan opens up and develops a permanent and much needed public improvement which has for many years past been neglected and is the most practical, economical and feasible opportunity that Chicago possesses for this purpose.

Two Thirty Foot Driveways
The design contemplates a double tunnel 76 feet in width, commencing a little south of Randolph Street, and receding northward at a grade of 2 per cent and emerging on Lake Shore Drive near Ohio Street on the North Side at a like grade, each bore to contain a separate dirveway of 30 feet each in width and 20 feet in height, with a 6 foot sidewalk for the accommodation of pedestrians. The two bores to be connected by a series of arches between them, separated by piers 4 feet in diameter.

Reinforced Concrete Construction
In the construction of the boulevard as shown the author recommends the use of reinforced concrete as structural material, and white glazed terra cotta for lining and finishing; and cresote blocks for paving driveways.

Perfect Lighting System
The lighting as planned throughout will be after the style of the Reverse Lighting System, composed of numerous clusters of electric lights artistically arranged throughout the driveways so as to throw the light toward the ceiling, which will act as a reflector, thus giving a diffused effect. This will also be reinforced with large light shafts situated 300 feet apart and lined with white glazed terra cotta, thereby giving an abundance of light and ventilation and making the bore absolutely sanitary.

The plan also contemplates a railing between the driveway and sidewalks and between the piers separating the driveways throughout the tunnel boulevard, and around the approaches at the grade level, all of white glazed terra cotta with balustrade effect. A grade of less than 2 per cent is made possible by reason of the unobstructed route. 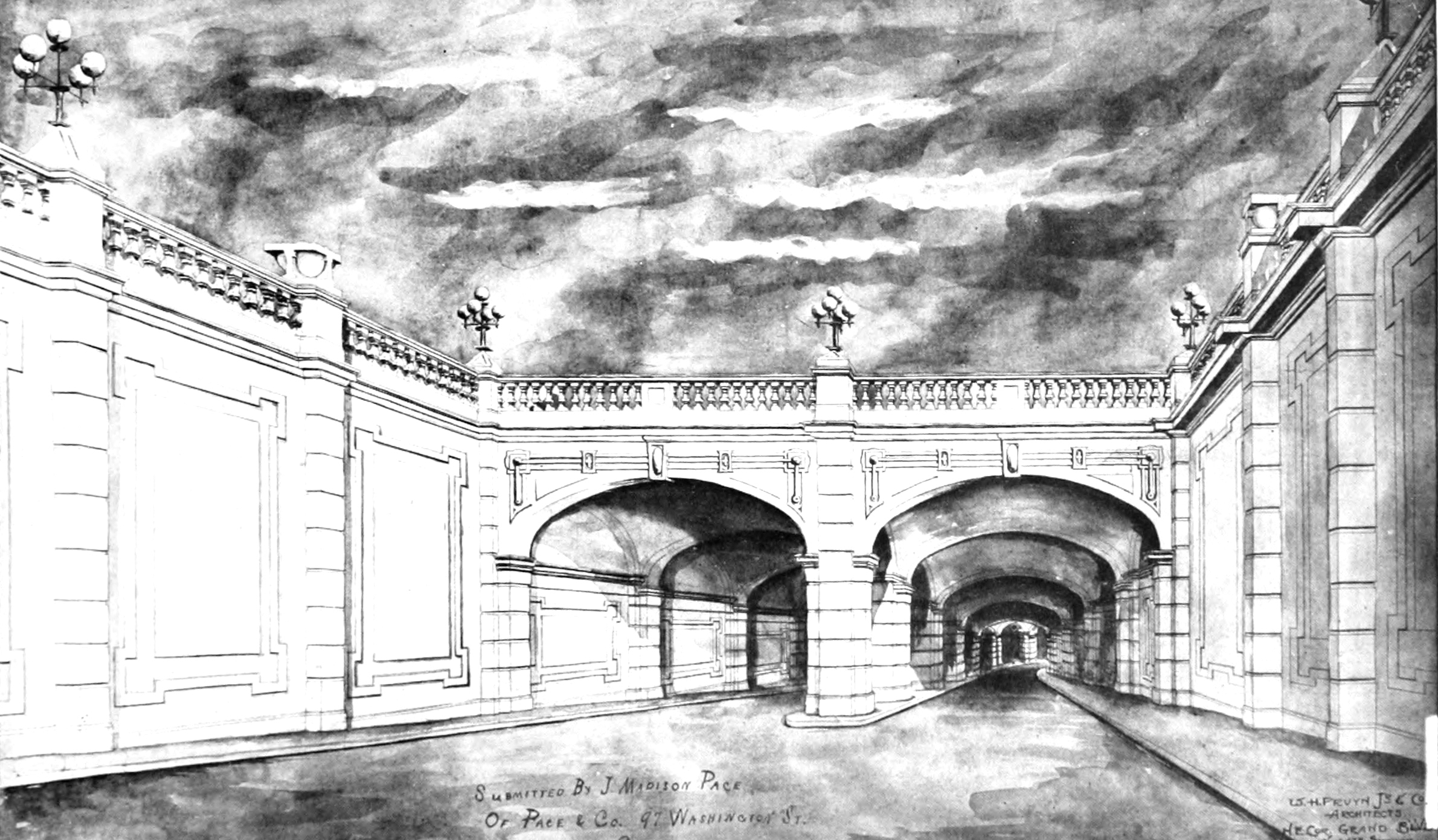 Architecturally Beautiful
The architectural problem is so thoroughly and satisfactorily worked out that it makes the tunnel absolutely sanitary and gives proper light and ventilation, and so attractively ornaments the interior that it will make the traversing of the bore safe and pleasant. Continuous traffic would not be interfered with as in the case of a bascule bridge.

No Condemnation Necessary
Note particularly that the plan as shown here does not require the condemnation of valuable property, as is necessary for the completion of other plans heretofore submitted.

It does not obstruct the proposed widening and deepening of the Chicago River, but is in line with such an improvement as the roof of the bore is 40 feet below the surface and the airshafts are so arranged that the river could be widened to a width of 250 feet and a depth of 40 feet, should the future developments demand it.

Freight Traffic Increasing
The Boulevard will not retard traffic en route to the proposed outer harbor system, but is the only plan yet submitted that eliminates the congestion of pleasure traffic at the cross streets connecting with the Lake Front, thus leaving the East and West Streets clear for so called, heavy teaming.

It does not obstruct the street crossing between the loop district and the railroad freight houses, the docks and large ware and storage houses. To the careful student of industrial conditions it is clear that heavy teaming can not be dispensed with on any of the East and West Streets between Randolph and Ohio Streets or at the crossings of the East and West Streets on Michigan Avenue or Pine Street, with the factory district developing on the North Side, and the immense railroad terminals with more than 100 acres of freight cars, both east of Michigan Avenue, and these conditions being permanent ones, with a healthy increase in traffic, and the rapid building up of Michigan Avenue, with office buildings, clubs, hotels, retail stores, public institutions, etc., renders the Grant Park and Ohio Street connection a most possible and practical plan of relief.

It is closely estimated that over 2,500,000 tons of freight in and out bound, are handled at these freight houses east of Michigan Avenue annually. At two tons per wagon would mean 1,250,000 loads, most of which must cross Michigan Avenue. In addition to the immense traffic in this vicinity it is closely estimated that there are 3,500,000 so called pleasure and light business vehicles, that traverse Michigan Avenue and its intersecting streets between Randolph and Kinzie Streets; 80 per cent of which could conveniently and profitably use the tunnel boulevard shown here, thereby relieving the congestion on Michigan Avenue to a very large degree. The extra distance caused by the deflection of traffic to the East would be more than offset by the ease and speed with which the business district could be reached by the North Siders.

Anyone engaged in lake traffic, and located some distance up the Chicago River will readily appreciate the importance of dispensing with bridges as far as possible and the development of subway connections between the North, South, East and West Sides. 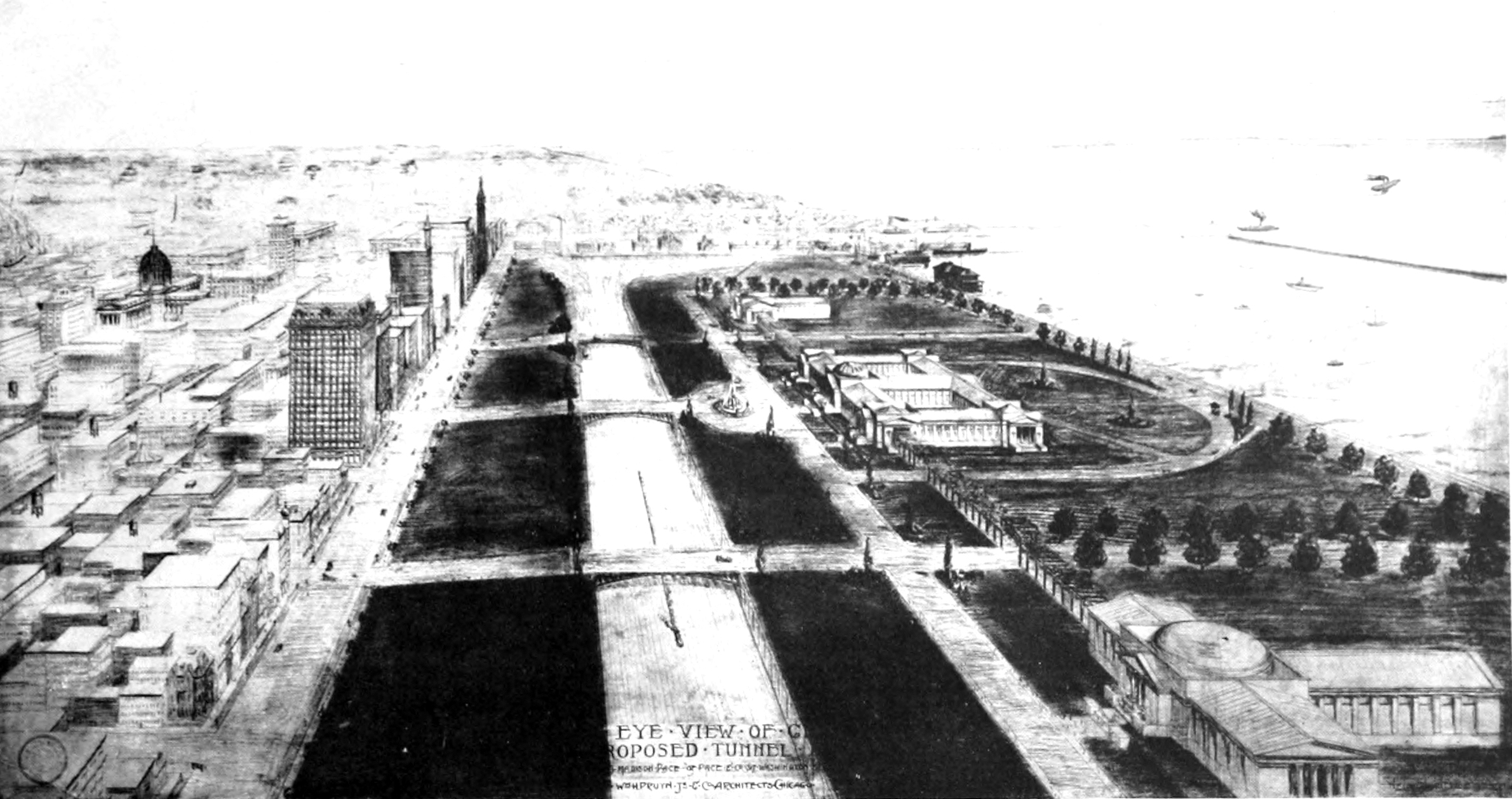 Cost Less Than Other Plans
The construction of this Boulevard if adopted can be commenced at once and rushed to completion without condemnation suits (which would necessarily take place in the carrying out of any other plan yet submitted to the Board of Local Improvements). This is the only plan that is in strict harmony with the improvement of Grant Park, the proposed Passenger and Freight Subway, and with the future Outer Harbor, River and Deep Waterway Development. By the addition of large conduits on the west side of the bore, (which could be used for telephone, electric light, cables also water mains) would no doubt earn a sufficient revenue to meet the charges of maintenance. It stands last but not least, hand in hand, with the making of a Greater Chicago.

Surface Boulevard Connection
The Author of the Tunnel Boulevard, also has under consideration two other possible relief plans of which space here would not permit the printing of sketches.

Condemnation Cost Small
Taxpayers will be relieved of the enormous cost of condemnation of property and the unwarranted delay that would necessarily follow any of the other plans. This plan contemplates an inexpensive connection, the total cost will not exceed $750,000, as there is no condemnation of property, (except a small piece of property joining the River) . Michigan Avenue and Pine Street can be boulevarded so as to get a forty foot driveway without any expense whatsoever, (with the exception of paving) to the taxpayers. By the adoption of this plan, work can be commenced at once. The result will be the rehabitulation of an old shabby quarter of the city, thereby, resulting in the conversion of the street to retail uses and accruing great benefit at a minimum expense to the people at large.

Grant Park Surface Connection
The other plan not illustrated here is a surface boulevard, connecting Grant Park with the new Extension of Lake Shore Drive at Ohio Street, via the same route as proposed for the tunnel connection. This connection can be accomplished at about the same expense as the proposed tunnel boulevard as shown in the picture.

We give preference, however, to the Tunnel Connection, which we believe will provide for the people that which they are continually demanding, “An uninterrupted connection at a minimum expense.”

We respectfully submit that it is conceded by the Commercial Club Plan Committee, the Michigan Avenue Improvement Association, and a great many property owners and business people, that a connecting Boulevard at the Lake Front, connecting Grant Park with Lake Shore Extension on the North Side is inevitable.