The New Avenues.
The Common Council, at their last meeting, changed the name of Wells street to Fifth avenue, for no other purpose, apparently, than to upset all our notions of propriety. Hereafter we shall be shocked with accounts of “ranches pulled” on Fifth avenue; of “cribs cracked” on Fifth avenue; of disorderly beer-shops, tipsy women, and drunken sailors, on Fifth avenue. At the same time, following the rule of contraries, Griswold street, one of the most unquiet of thoroughfares, where ladies live who take in gentlemen from the provinces, and do for them, and where the citizens of Orland and Palos go with the police, in search of their stray pocket-books and watches, is called Pacific avenue.

So did Ald. Hahn.

Ald. Holden liked the name Wells street. It was an old land mark.

So did Ald. Cox. A change of name would not change its morals.

Ald. Dixon thought a rose by any other name might smell sweeter.

The motion to reconsider was lost by, ayes 8; noes 18. So Wells street is Fifth avenue, and Griswold street is Pacific avenue.

Lakeside Annual Business Directory of the City of Chicago, 1880 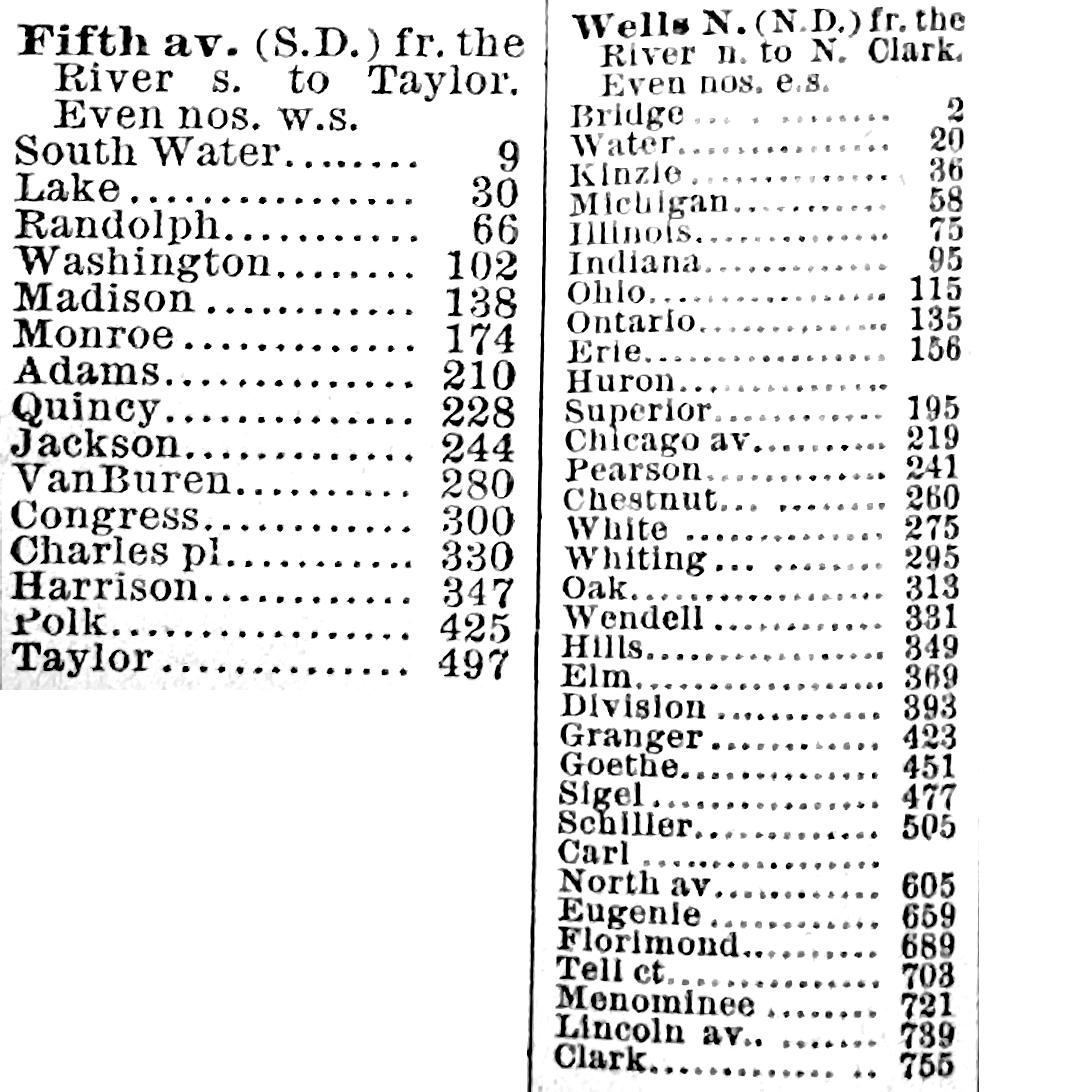 Lakeside Annual Business Directory of the City of Chicago, 1907 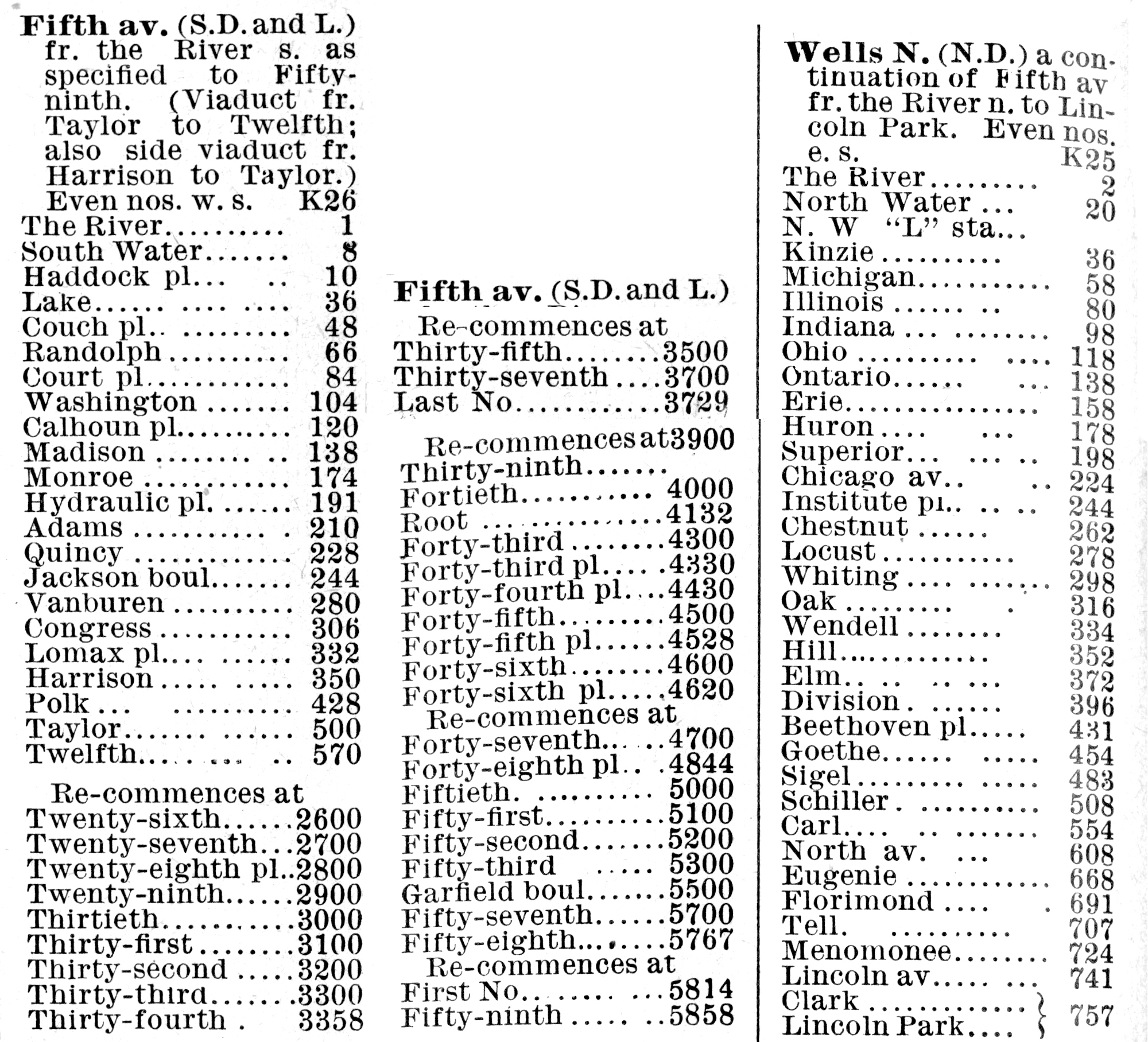 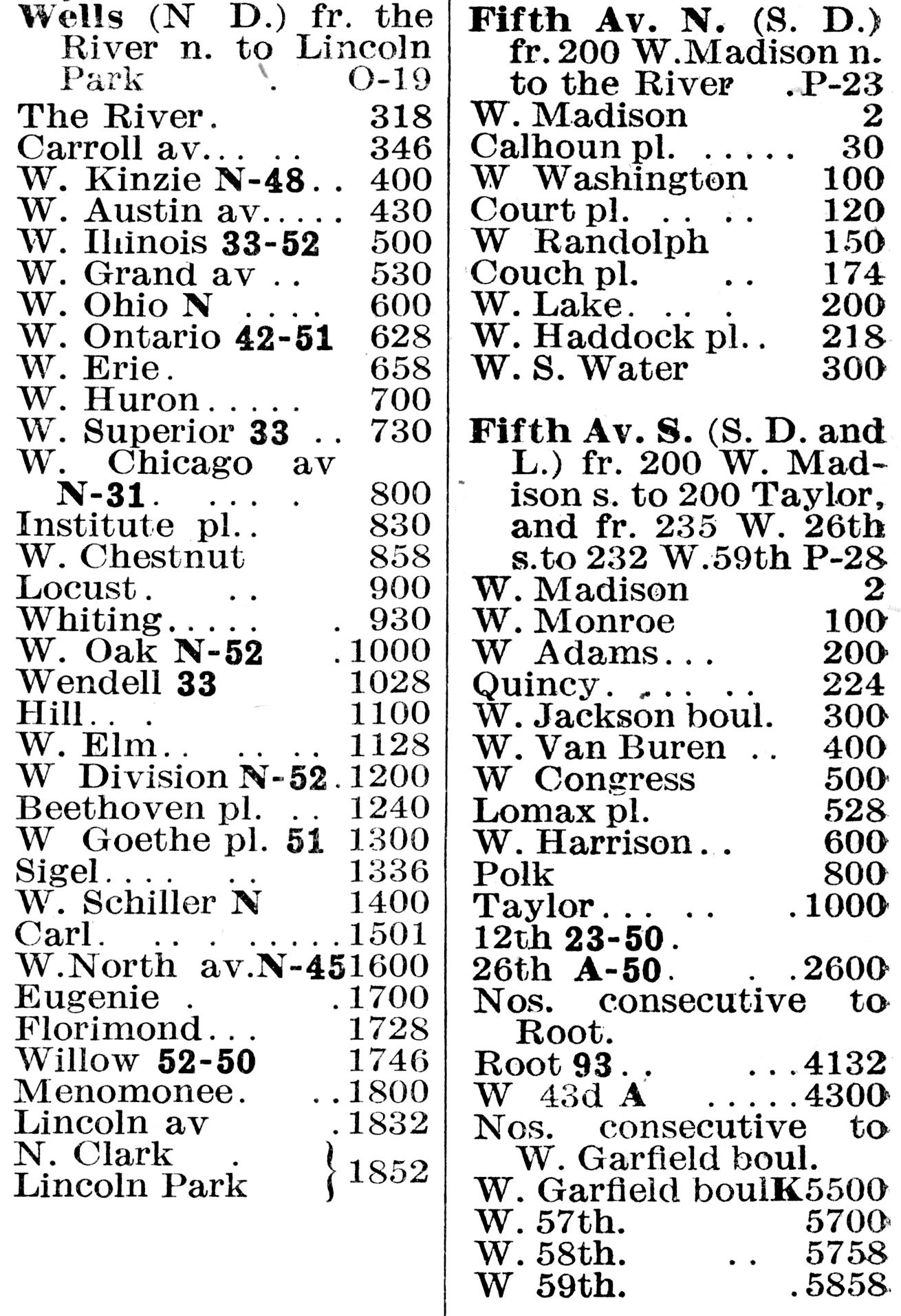 The name of Fifth avenue will be changed to Wells street if the recommendation of a subcommittee of the city council committee on streets and alleys is adopted. It is proposed to have change take effect Jan. 1, 1918, to give Fifth avenue business houses sufficient time to make their signs and letterheads conform with the new name.

The action was the reverse of the change asked by Wells street property owners, who wanted to name Wells street North Fifth avenue. The Chicago Historical society, however, made an appeal for the preservation of the name Wells in honor of Capt. William Wells, a prominent figure in early Chicago history.1

Other changes recommended by the subcommittee were:

The subcommittee is composed of Al. Kennedy, Rea, and Anderson.

On Jan. 1, 1918, Fifth avenue will officially cease to exist. On that date the name of the thoroughfare becomes Wells street by the terms of an ordnance passed yesterday by the city council. The street is named for Capt. William Wells of Indian war fame. Other changes made by the council were Avondale avenue to Parkview terrace, Ninnewa avenue to Northcott avenue, South Shore avenue to Exchange avenue.

1 In 1812, the Madison administration failed to notify the frontier that the United States was about to declare war on Great Britain. As a result, the British and Indians knew several days before the Americans that hostilities had broken out. Hundreds of Potawatomi warriors surrounded Fort Dearborn (present day Chicago) and demanded its surrender. Wells led a group of Miami Indians from Fort Wayne, Indiana, to aid the evacuation of Fort Dearborn. Among the Americans under siege at Fort Dearborn was his niece Rebekah Wells, wife of the post commander Nathan Heald. Wells’ intent was to offer protection to the garrison and their families – about 96 people, about a third of which were women and children—as they abandoned the post and walked east to Fort Wayne. Negotiating with the Pottawattomi, who surrounded the fort along the Chicago River, they were allowed to leave the fort, but the destruction of whiskey and guns enraged the Pottawattomi, who then attacked once they had marched south from the fort, a massacre known as the Battle of Fort Dearborn. Nathan and Rebekah Heald were both wounded, but were taken into captivity by the Pottawattomi and eventually ransomed to the British.

Wells, who was acting as a scout in advance of the party, knew the Indians would attack and had painted his face black: a sign of bravery, a sign to the Pottawattomi that he knew their intentions, and as a sign that he knew he was going to die. As the evacuated garrison walked down the beach, Wells rode in advance to keep an eye on the Pottawattomi, and he was one of the first to fall when they attacked. The “battle” took place in the dunes along Lake Michigan about a mile south of the Chicago River, in what is now downtown Chicago. Wells was shot and killed by the Potowatamis. His opponents, although considering him a traitor to their cause, nonetheless sought to gain some of his courage by consuming his heart.