Introduction
The first city-owned electric light plant was established in 1888, and the city promised “superior illumination on streets and bridges.” By 1893, four such plants were in operation and Chicago was on its way to becoming the best lighted large city in the world. Progress in electric street lighting was not all that rapid, though, and thruout the 1920s and ’30s Chicagoans were voting on bond issues which would appropriate money for replacing the gas lamps in certain neighborhoods with new electric equipment. 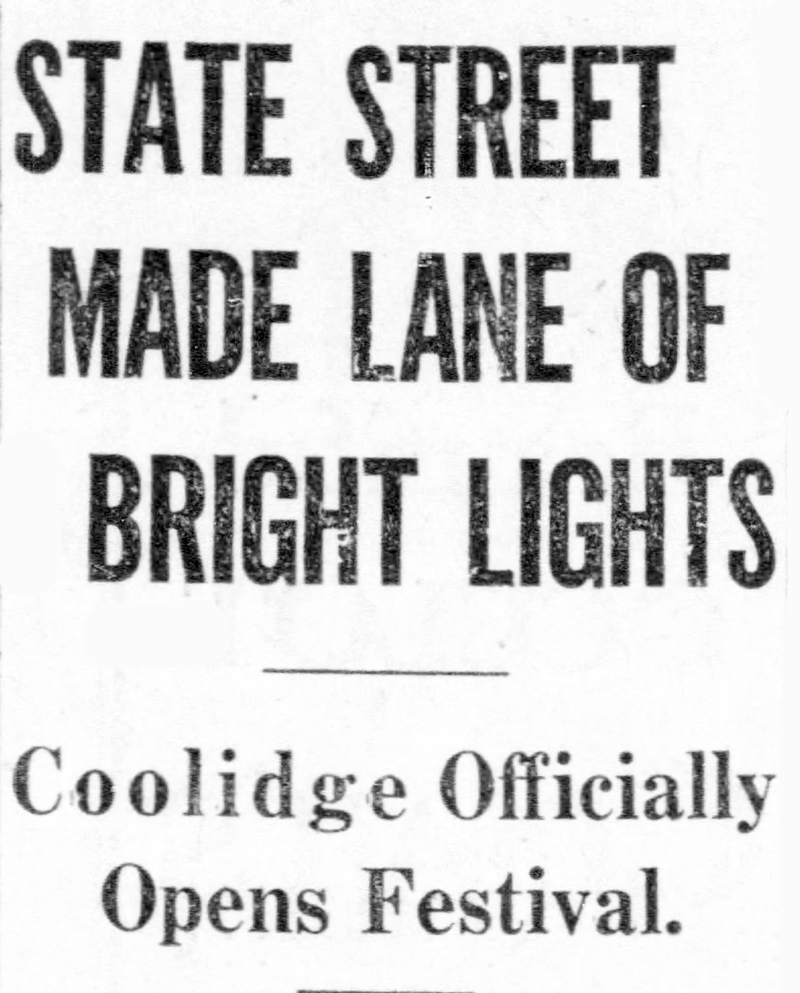 BY GENEVIEVE FORBES HERRICK.
At 22 minutes past 8 last night (Chicago time) President Coolidge pressed a golden telegraph key in the White House and $100,000 worth of golden light flooded the seven block segment of State Street from Van Buren to Lake streets, casting its beams on something more than 250,000 people who were massed together in the street’s most superlatively big crowd. And it has had many.

“There she goes. She’s all lit up,” sang out a community spokesman from the middle of a swirl at State and Madison streets.

The crowd, with one neck, looked up. The new 140 new 2,100 watt lamps never blinked an eye, as a powerful and even, but not a jarringly dazzling light lifted people and buildings into an area of daylight. 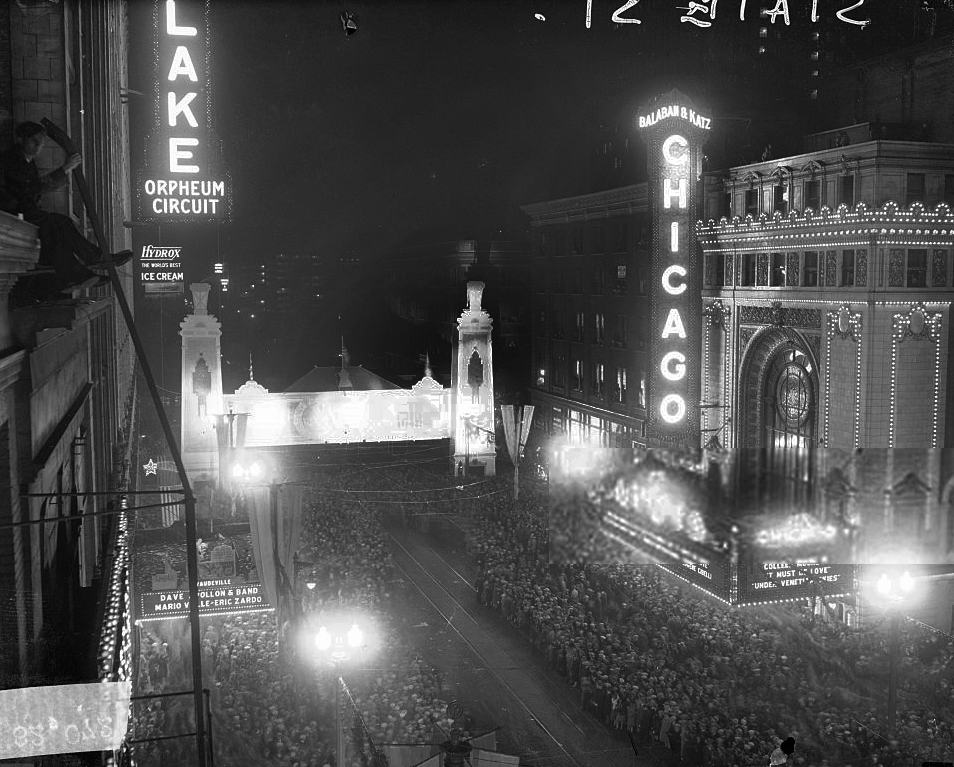 Carnival Spirit Prevails.
For a moment or two the audience gazed up, and across, admiring the cool, smooth burst of light.

Then it turned the ceremony into a carnival. Confetti swam through the air and was lighted on its giddy way by the penetrating shafts of light from the lamps. Horns began to blow. Songs, whistles, yells, and cheers echoed up and down the lane of light.

Even those mighty lights couldn’t seem to find a square foot, from one side of street to the other, from Van Buren to Lake, which wasn’t occupied by at least one person. From the side streets hundreds more pushed or were pushed into the pageant.

At the two terminals of the new lighting system huge arches curved in front of the elevated platforms and thousands or bits of colored glass, with mirrors in back, simulating jewels, shimmered luxuriously in the lights that played upon them. 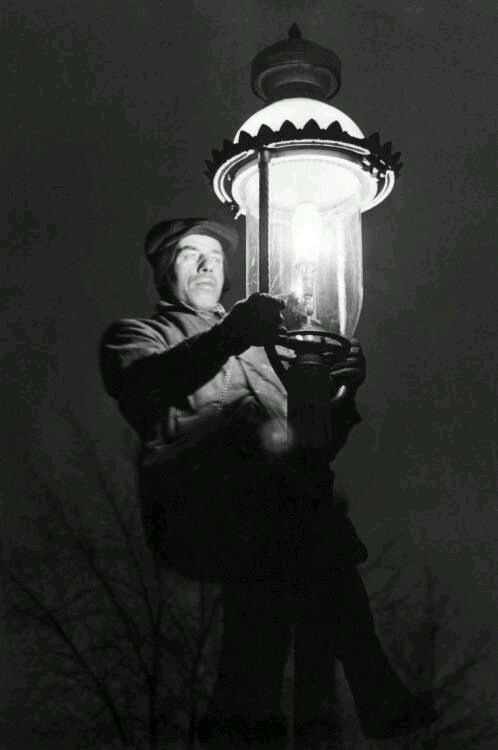 Stunts on High Buildings.
High up on a building a vaudeville performer, blindfolded, was standing on his head and doing other tricks. His body was silhouetted against the black chimney more clearly than if he had been giving his performance at high noon.

Squads of policemen lined up in front of the store windows to prevent the crowds that bent and swerved and massed from breaking in the plate glass windows. The big window at the southwest corner of the Davis store was crashed to smithereens, but many others were saved by the policemen.

Down at Van Buren street a parade had been forming for an hour or more. But there wasn’t an inch of space on State street on which to make even a start.

Worms Way Up a Street.
Martin J. O’Brien, acting mayor, and Brig. Gen. John J. Garrity. marshal, led the procession, which finally was compelled to make a slow, disconnected way up the town;s main street. First came a symbolic float illustrating an episode in the history of illumination; then hundreds of men and women and children pushed into the foreground, would reel about, helpless but good natured, and after a bit the street was cleared and the next float, taking the progress of illumination one step further, would pioneer through the crowd.

Among those who made the official pilgrimage up the seven bright blocks were the following: 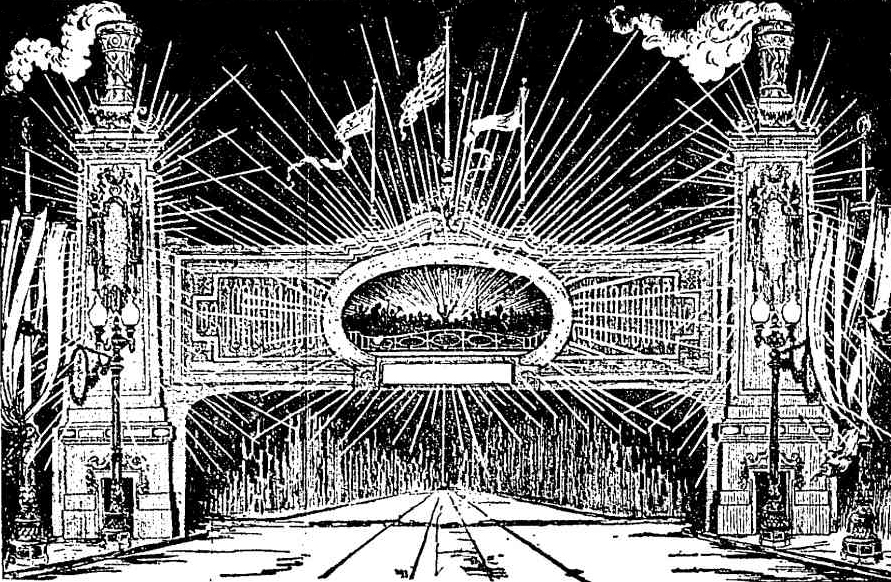 Sketch of the huge arches that were erected on State Street at Lake and Van Buren streets as a part of the new white waym which was put in operation on October 13, 1926, Searchlights played on each arch. They were studded with jewels imported from Austria, each the size of a silver dollar. About 30,000 were used in the two arches.

Telegram from Thomas A. Edison.
About the time the 250,000, and more, were cheering the results of the new lighting system, Thomas A. Edison, inventor of the vacuum light upon which last night’s achievement was based, sent the following telegram to the State Street Lighting Association:

You deserve congratulations in inaugurating such a unique and practical idea. I think it is bound to be successful.

Likewise, the State Street businessmen who provided the lights and who planned the three night festival which concludes tomorrow night, believe the new system is bound to be successful.

“From now on” said Elmer Stevens, of Charles A. Stevens & Bros., “State Street will offer to residents and transients a brightly lighted street which should be one of the ‘sights’ of Chicago. On State Street we have been of the opinion for a long time that there was a lack of facilities for evening promenade, and we now believe that we have provided something to overcome that difficulty.”

David Mayer, vice president of M. L. Rothschild & Co., and chairman of the festival, in praising the ceremonies, praised the cooperation of the merchants.

“In my experience,” said Mr. Mayer, “I have never been connected with a public movement of this sort where such complete cooperation of units was recorded. This new step in civic improvement has been backed up by practically 100 per cent of the State Street business men in the district between Van Buren and Lake streets.”

Others Active in Work.
Others active in making arrangements for last night’s festivities include:

Your city illumination visible here at 8:30 in soite of bright moonlight. The distance is about 100 miles. 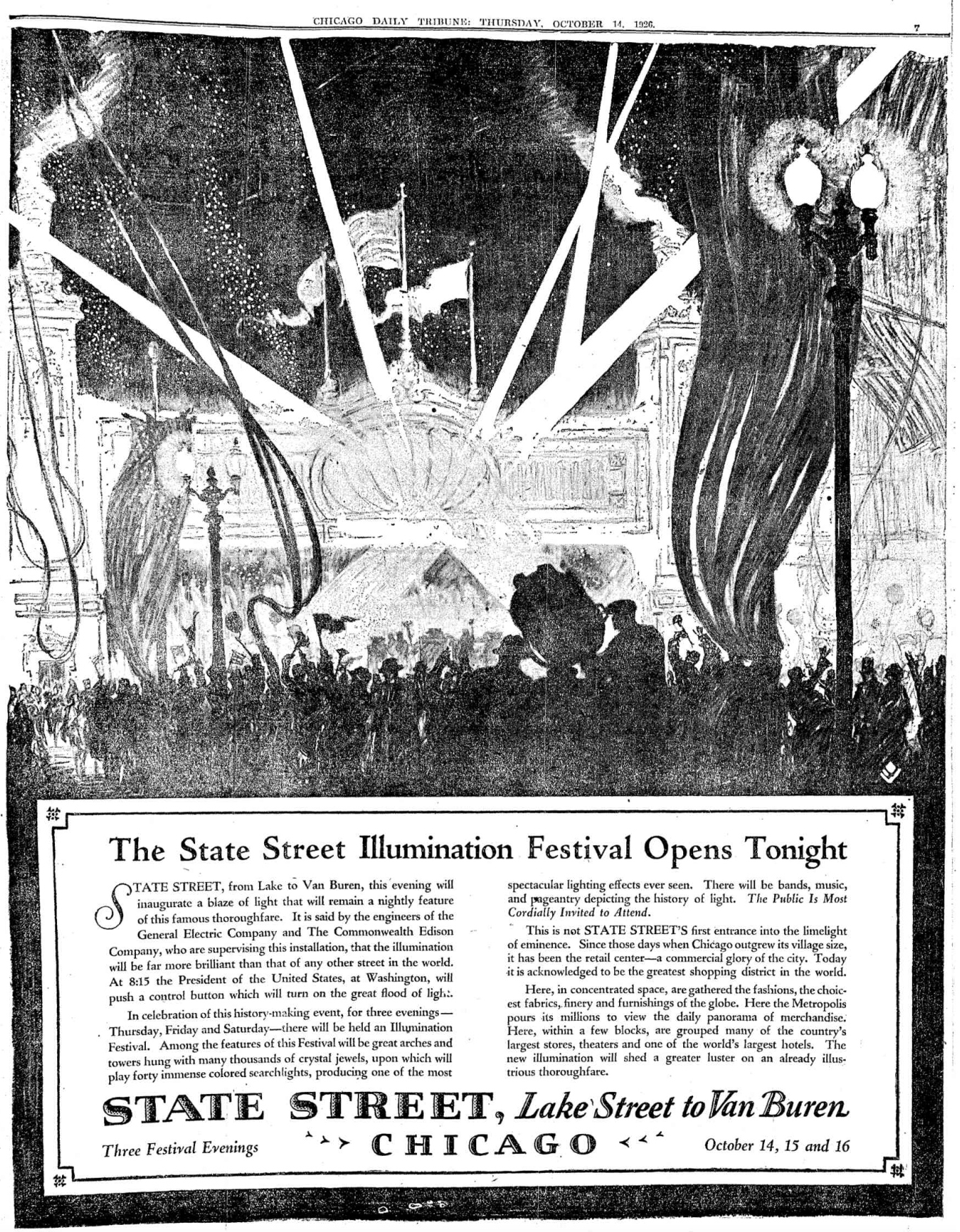 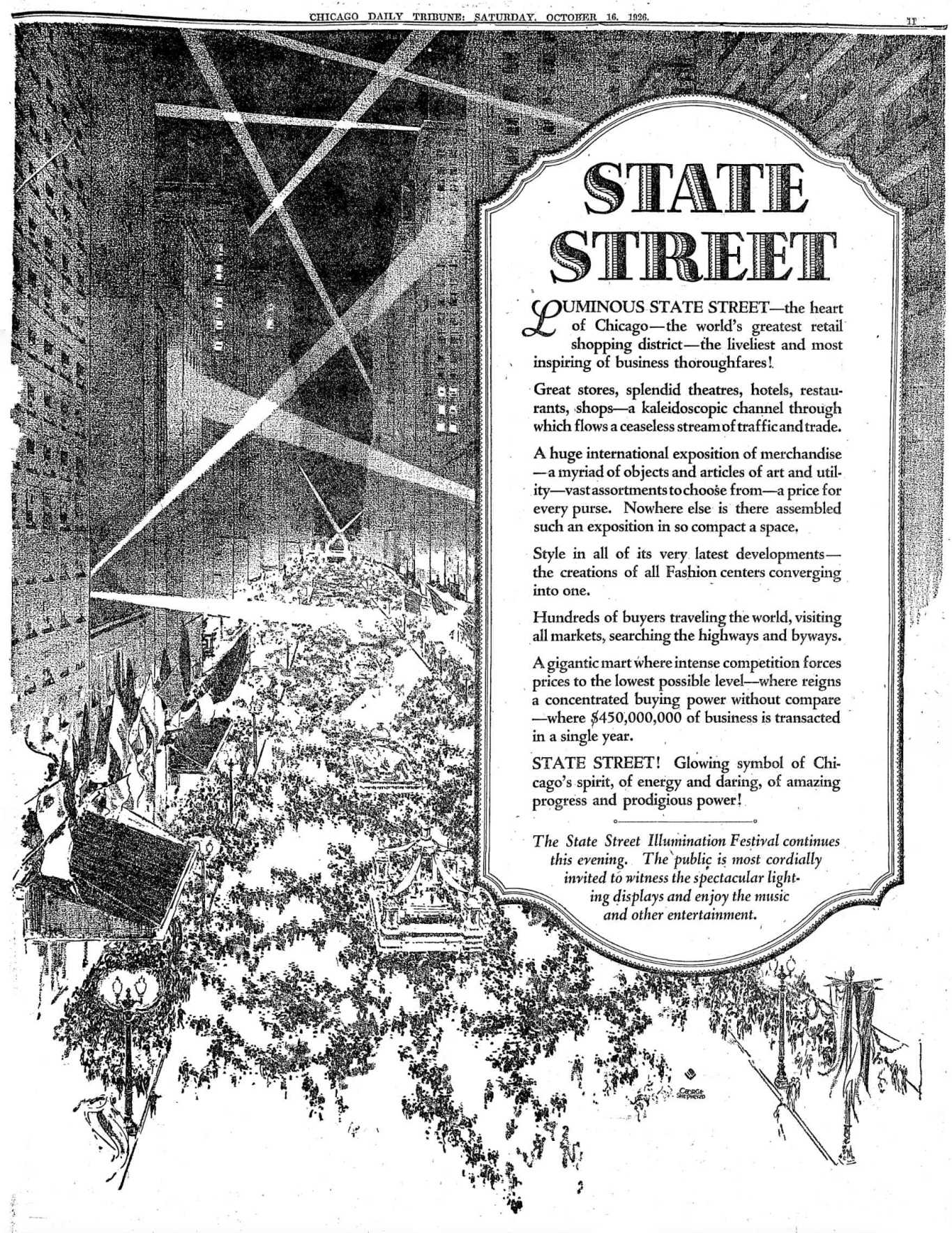 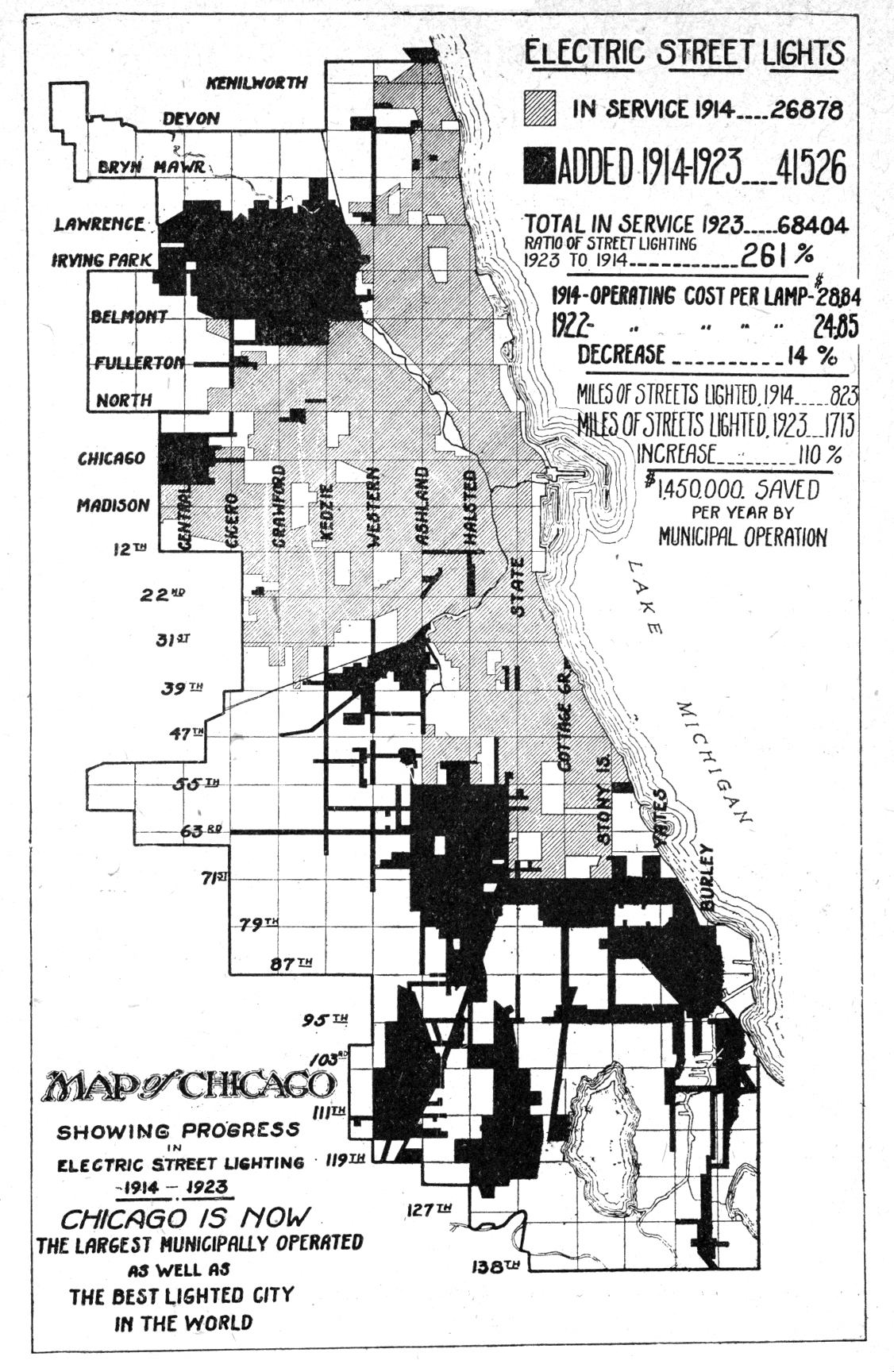 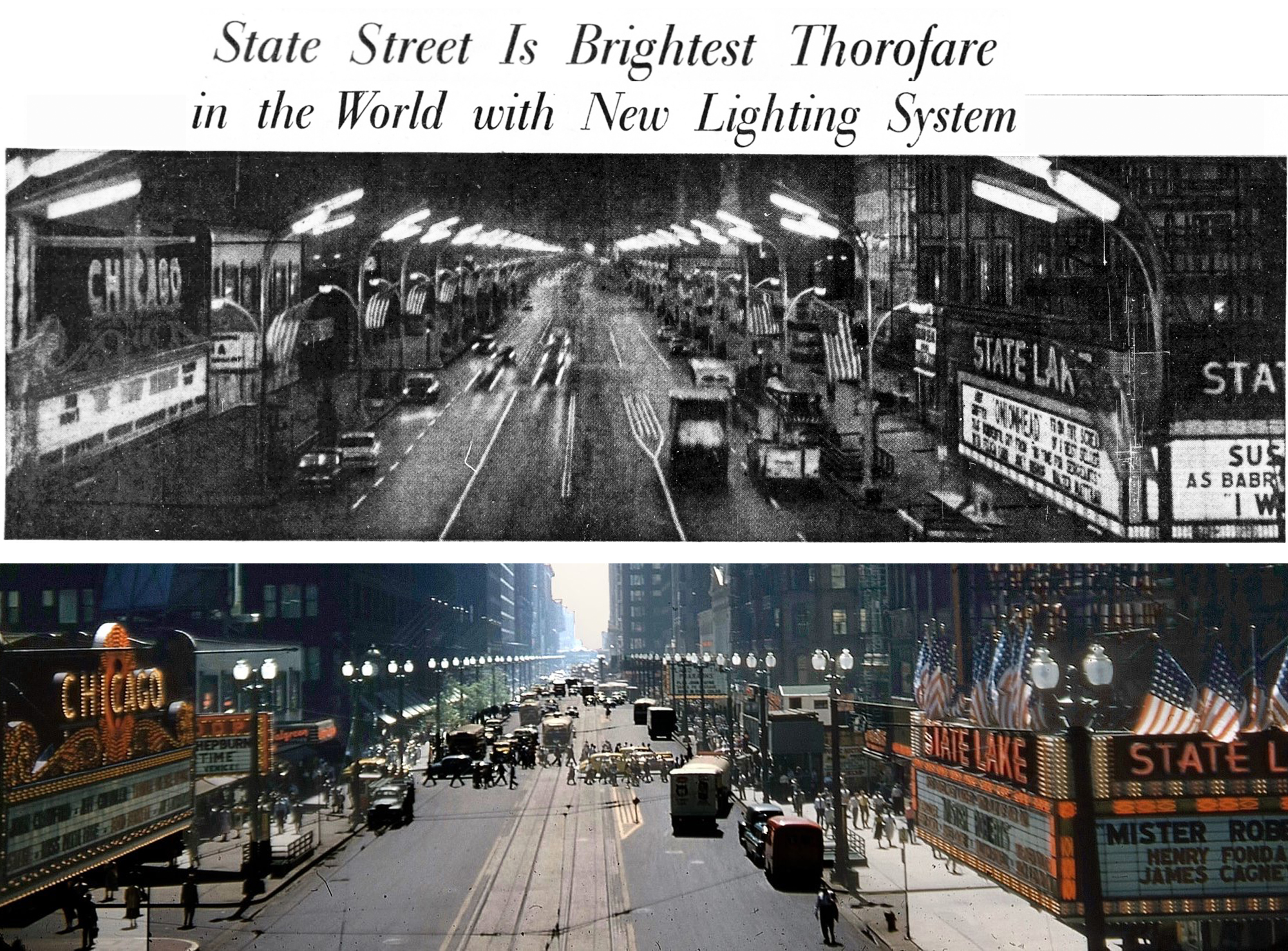 A radio signal from America’s Vanguard satellite in outer space began the build-up. As the signal beeped away over a loud speaker system, Carl Zersen, president of the Chicago Light Institute, said from a stage erected at State and Madison streets:

And so, Mr. President, State Street is ready.

Moment of Suspense
There was a moment of suspense before President Eisenhower pushed a golden telegraph key 700 miles away in the White House, causing Vanguard’s signal to turn on the street’s new half million dollar lighting system, which is controlled by radio.

Then, in a split second, the lights were ablaze.

A loud hurrah arose from the crowd of 250,000 jammed along the famous shopping center between Lake and Van Buren streets. It was 9:04 p. m. A band swung into the song “Chicago” and a new era of lighting began.

The system is the first in the world to utilize radio control. Radio signals from a control center will turn on all lights at dusk, turn off all off at dawn. 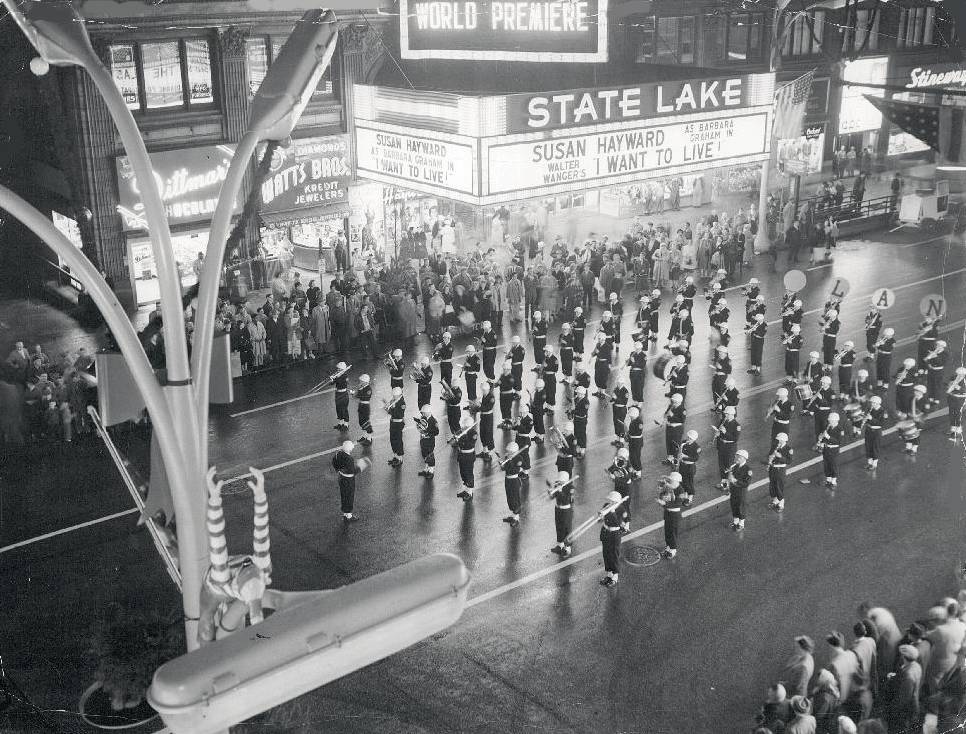 Radio Set in Each Pole
A radio receiver is located in the base of each of the 70 poles in the new system. Each of the 36 foot high poles is topped with four fluorescent lamps. The lights will produce four times as much light as the 1926 fixtures which were replaced.

In the half hour preceding the light-up ceremony, seven high school bands entertained the vast crowd at corners along State Street. A pageant telling the story of “Light thru the Ages” was staged by 100 actors, dancers, and musicians at State and Madison. The crowd loved it.

Mayor Daley praised the State Street Council for its “courage and vision.” He cited the lamps as an example of the city’s “I Will” spirit.

Commercial Light Company, 841 Washington Blvd., which put in the old filament lights 30 years ago for $100,000, also put in the new lights. 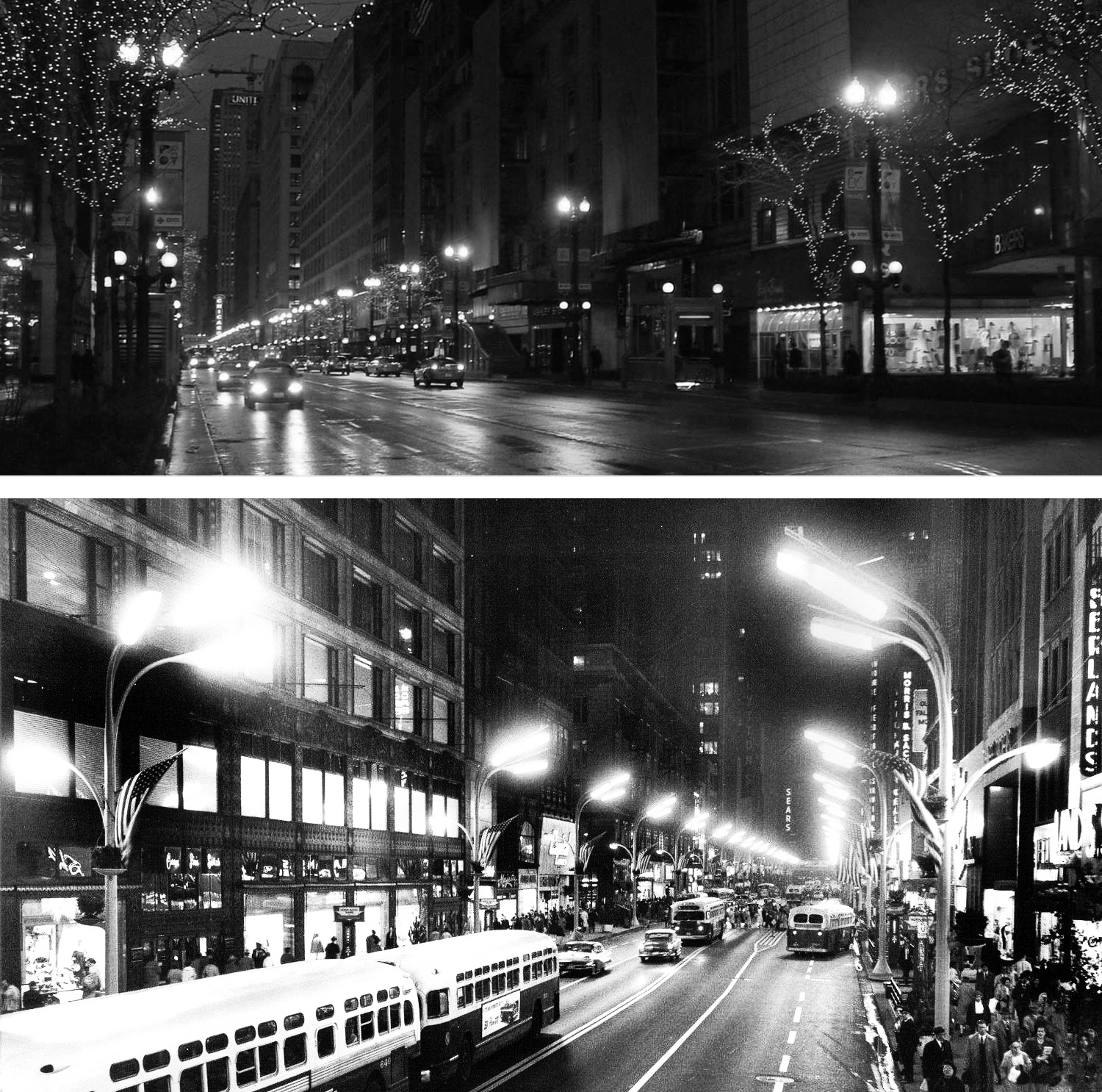 State Street before and after at night.

About the New Lights
John Weber of Commonwealth Edison company, technical adviser on the project, said the lights contain these revolutionary features:

1. They will be radio controlled. A central transmitter in Carson Pirie Scott & Co. will send out signals to receivers in the base of each light. Guided by an automatic timing device, the transmitter will send out beams that will turn on the lights at dusk, turn off the three lower arms at midnight, and extinguish the top one at dawn. The transmitter also will control holiday decoration lighting which, in itself, will be more powerful than the entire present lighting system.

2. The lights will contain cooling systems which will keep them at the temperature allowing the maximum output of light.

3. Each pole will contain a heating system to keep the radio controls and other wires dry.

4. Each pole will have a drainage system to drain water from the three 30-inch flower pots that will hang from each standard. 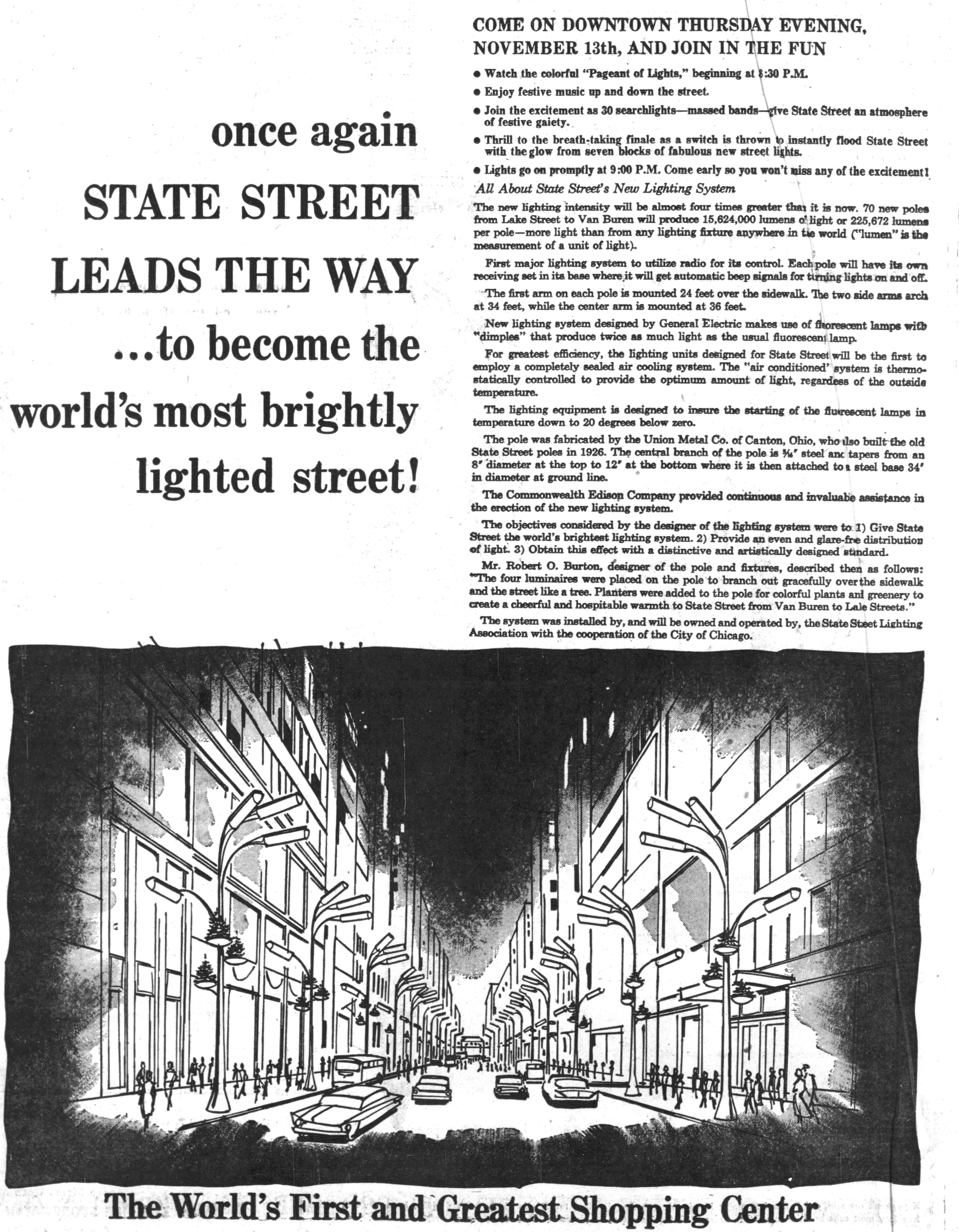