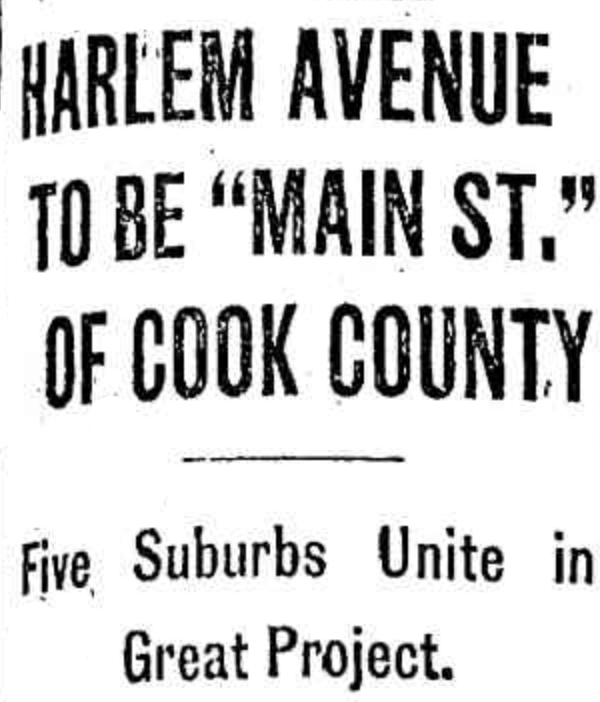 BY AL CHASE
One of the most important and far reaching street improvements ever undertaken by Cook County—one which is going to uncork a bottled up thoroughfare and place in close communication with each other five big suburbs, with a total population of approximately 100,000, was announced by the Greater Harlem Avenue association.

When completed Harlem avenue is expected to be the “Main Street” of Cook County, a great north and south thoroughfare, 100 feet wide, linking up the DesPlaines valley suburbs. Eventually, its sponsors believe, Harlem avenue will be made 100 feet wide from Will county on the south up to the north shore.

First Unit Four Miles.
The first step in the big project will be the widening of Harlem avenue from West Madison street four miles south to Pershing road, formerly 39th street, the “lake to zoo” thoroughfare. Along this four miles of hard paved road will be a two track street railway, which means Oak Park and Forest Park will have direct transportation to Berwyn, Riverside, Lyons, and, independently, to the big new Chicago Zoological park on the west bank of the DesPlaines.

Each of the five towns affected by the four mile unit has announced its intention of backing the big project and property owners along the street have O.K.’d it.

Zigzag Trip Starts Things.
Like all big improvements, it takes several years to get them underway. Chester H. Bragg of the Carroll L. Bragg organization, realtors of Berwyn, Riverside, and La Grange, several years ago tried one stormy day to drive from Oak Park to Berwyn. It looked easy on the map, but when, several hours later, he arrived at his destination and looked at his speedometer he got a shock. He decided it was time to get a through street between the two suburbs without having to make a grand tour of Cicero, Niagara Falls, Washington, D.C., Crown Point and Stickney.

The first concrete result of Mr. Bragg’s roundabout journey from Oak Park to Berwyn resulted in a temporary organization meeting in Riverside on July 2, at which representatives of Oak Park, Forest Park, Berwyn, Riverside and Lyons were present.

Meet in Oak Park.
On July 11 in the Oak Park village hall the Greater Harlem Avenue association was formed. Ald. A. R. Kinney of Berwyn was elected president. C. E. DeLeuw, village engineer of Riverside, was made secretary. Mr. Bragg was named chairman of the publicity committee. The hall was crowded with official representatives from each of the suburbs, as well as citizens.

An official of the Chicago and West Town Street railways promised that if franchises were granted it would at once construct a two track line from Madison to Pershing road.

Ald. Kinney of Berwyn stated that his city could pave the three and a fraction miles along its western boundary before winter if necessary. At present there are stretches of road so buried in mud no one would ever suspect there ever had been a street there. In several places there is nothing but greensward, not even a wagon track.

Big Bridge to Boom Plan.
It is believed that with the erection of the big bridge over the drainage canal at Harlem avenue, one of three authorized (the other two being Crawford and Cicero avenues) the secondary step in widening Harlem all the way across Cook county will receive further impetus. River Forest, at present not actively interested in the project, is expected to take a hand when it comes to widening Harlem north of Madison. Elmwood Park, Edison Park, Norwood Park and other communities, it is believed, also will join in the movement to make Harlem avenue one of the greatest of Cook county’s thoroughfares.

It is claimed that when the entire project is completed Greater Harlem avenue will be Cook county’s longest straight thoroughfare.

The sanitary district will take bids for the construction of a modern bascule bridge over the canal at South Harlem avenue on Nov. 22. If awards are made on these bids the district engineers figure on the completion of the structure by August, 1930.

Connecting up of Harlem. avenue between 47th and 53d will create the possibility of another important through artery from north to south on the west side. Harlem avenue is now approaching the semblance of a unit between 31st street and Milwaukee avenue near the Howard street line. Pavements of 30, 40 and 50 feet in width have been built at various sections, but through traffic is forced off in the of the sanitary canal and compelled’ to make wide detours.

Cook county Is prepared to meet the sanitary district bridge Improve- ment with the other necessary via- ducts, bridges and grade separations with railway lines by – mer of 1930, completing the thorough- fare as a travel unit from Milwaukee avenue to 147th street.

The following map and chart reflects the annexation of towns bordering along Harlem Avenue: 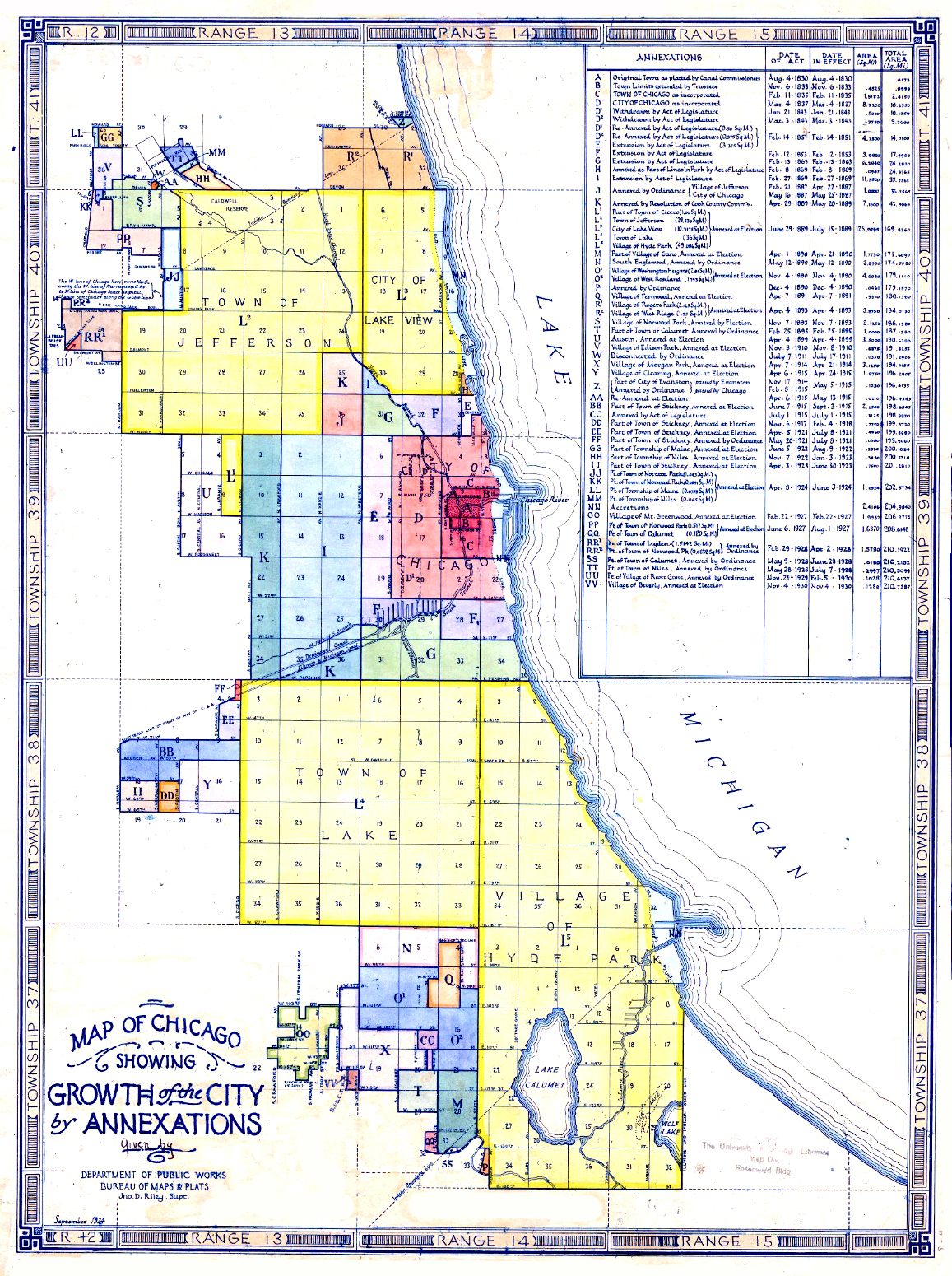