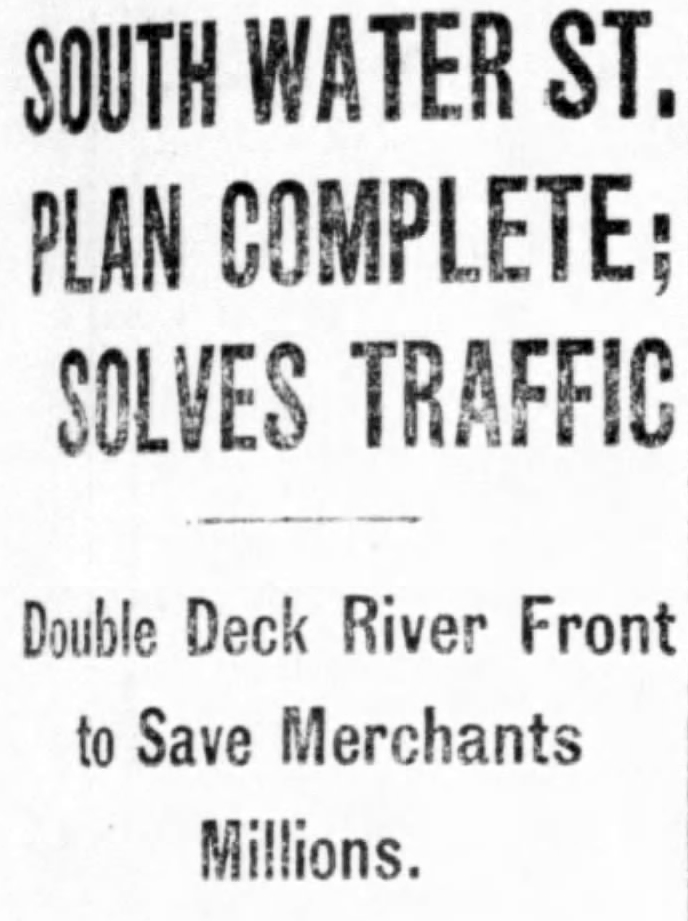 After months of study and work by experts the Chicago Plan Commission announces the completed survey for the reclamation of South Water Street. The scheme contemplates converting the congested mart from State Street to Market Street into one of the finest river fronts of any large city in this country.

Charles H. Wacker, chairman of the commission, declares that the street, if reclaimed, as the engineers and public officials have planned, will be second only to Michigan boulevard as a show place in Chicago, and at the same time will reduce the traffic complications of the city in the rush hours by at least 16 per cent.

Hundreds of thousands of dollars’ saving in food disposal and quick transportations also will be affected, the report points out. Mr. Wacker declares that the saving in waste alone in a single year will pay the entire cost of the improvement.

Will Reduce Congestion
The plans submitted by Mr. Wacker cover months of study by the plan commission’s experts, assisted by the technical staff of the railway terminal commission and many of the city’s chief authorities on transportation, engineering, and street traffic.

“South Water Street,” states the reports, “can be made an effective traffic distributor in the city’s heart, reducing loop congestion 16 per cent by removing 35,714 vehicles a day

Traffic Arteries Added.
It will add two new through east and west traffic arteries, the lower one unobstructed by cross traffic and will bring State, Dearborn, Clark and Wells Streets into their full usefulness by removing the present clogging by peddlers’ and grocers’ wagons between Lake and South Water Streets.

To change South Water Street into a fine highway of tremendous economic value to Chicago, and profit to the city treasury plus a tremendous saving to the consumer:

First—Take for public use all the property between the river bank and South Water Street from State Street to Market Street, excepting the big building of Hibbard, Spencer, Bartlett & Co. Tear down all the buildings and convert their sites into street space.

Second—Double-deck South Water and River Streets from
Michigan Avenue to Market Street, having the upper level conform about to the present elevation of the decks of the bridges. Keep the upper level of the new street for light traffic, excavate and construct a heavy traffic way on the lower level to connect the lake front warehouse, railway and manufacturing district with the West Side railway and industrial zone.

Third—Create on the surplus area of the lower level a rail-and-water freight transfer and team track facility open to all roads for the downtown district, leasing platform and traffic rights to a terminal company; freight cars to be conveyed to and from the terminal by car floats and lighterage on the river. Sub-surface area, if not used for freight station purposes and through traffic roadway, to be used as a public garage and parking space for automobiles.

Remarkable photograph of existing central district of Chicago showing the proposed South Water Street double- deck improvement sketched in. View looking southeast across the river from Kinzie Street, showing the Franklin-Orleans Street bridge now under construction. First step in the Plan of Chicago to make the banks of the Chicago River attractive, useful and profitable.

Worked Out by Bennett.
The plan for remodeling the street on the two level idea was worked out by E. H. Bennett, the commission’s architect. The transportation and traffic plans are by Henry A. Goetz. The entire project, worked out under the immediate direction of the plan commission’s chairman, Mr. Wacker, and the managing director, Walter D. Moody, has been reviewed and endorsed by John F. Wallace, chairman of the railway terminal commission, and the city’s engineers, John Ericson and C. D. Hill.

The lower level, 135 feet wide, connects with the lower level of Michigan avenue on the east with Lake and Market streets on the west, and provides an unrestricted through east and west heavy traffic roadway and wharfage eight feet wide and fifty-five feet for railway track and loading platforms. The upper level will be at the same height as all north and south bridges.

The report states that 6,070 automobiles daily cross the Rush street bridge. One-third of these would be distributed through the loop via the new South Water Street.

As a produce market, according to the report, South Water Street is doomed. New locations with improved sanitary and scientific handling and interchange facilities must be found. 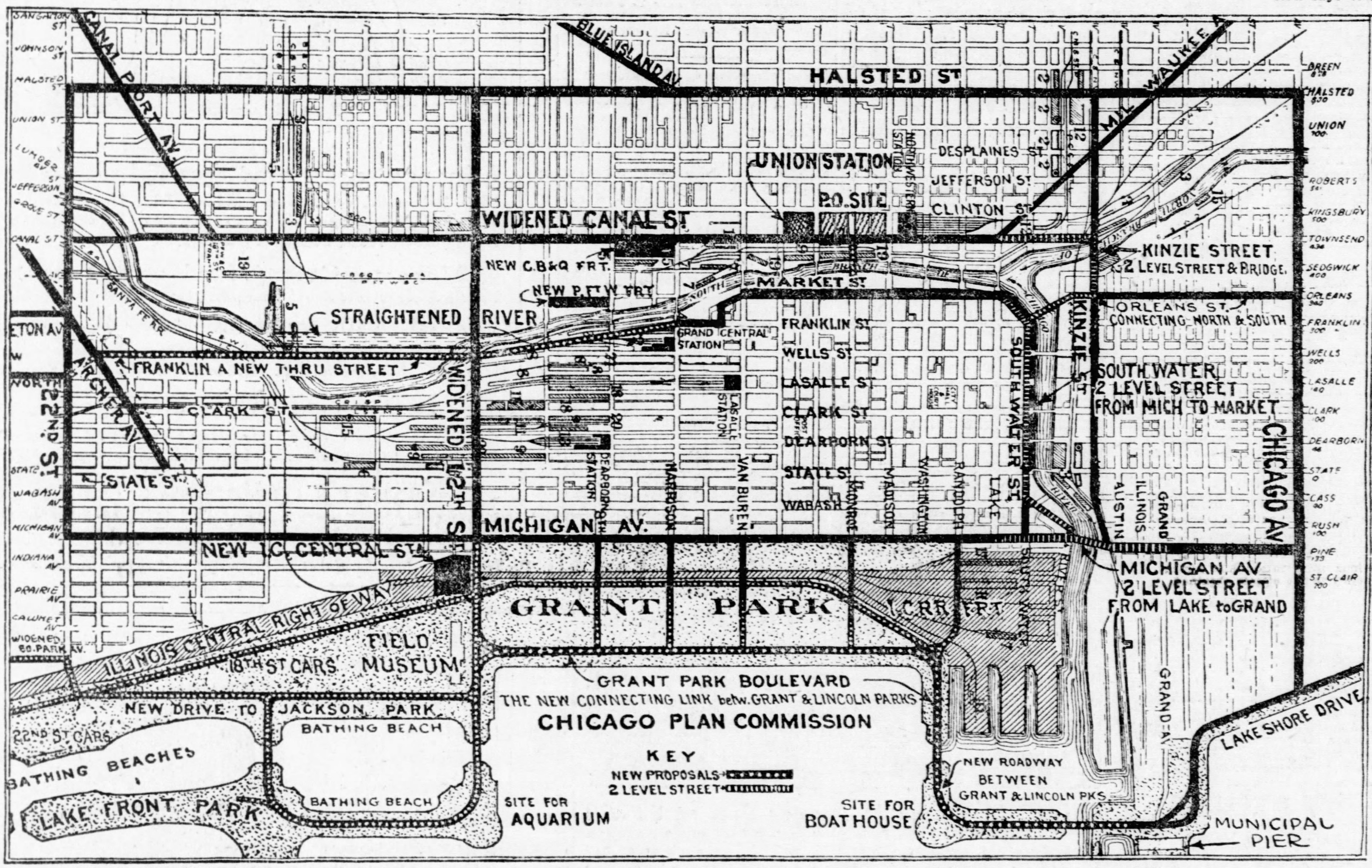 The central business and lake front section of the city, as laid out by the plan commission, embracing the plans for a new South Water Street. 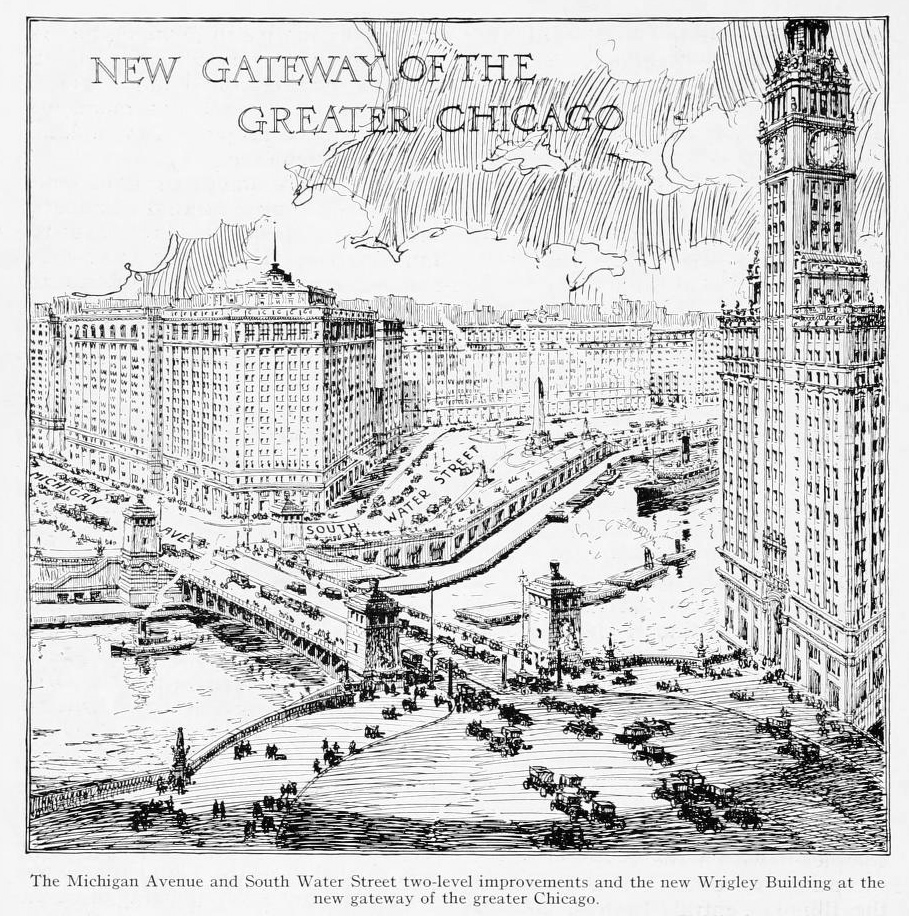 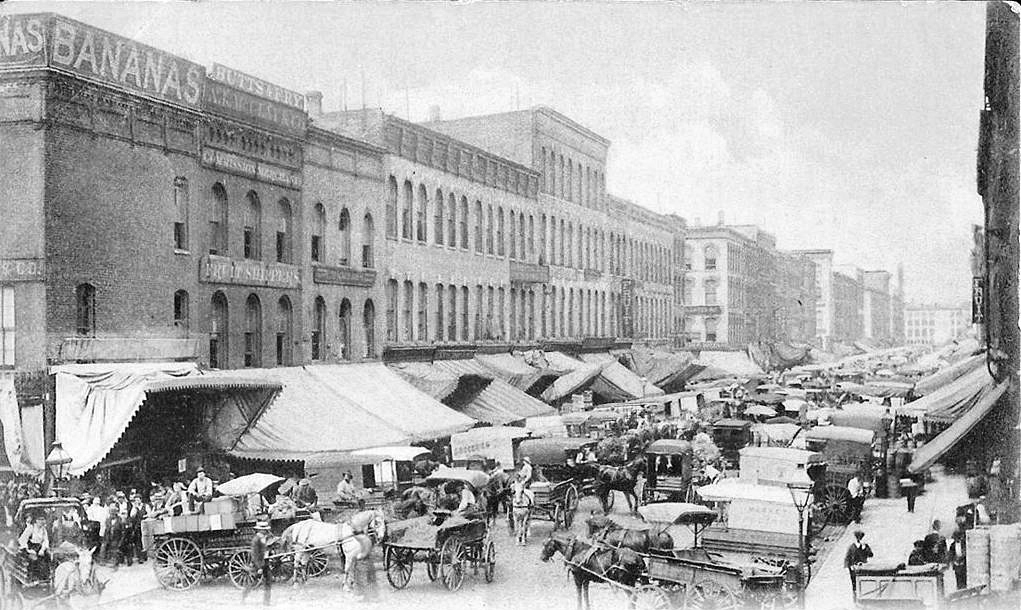 Showing South Water Street as it is today, congested with market wagons and handling a business which the plan commission says it has long outgrown.