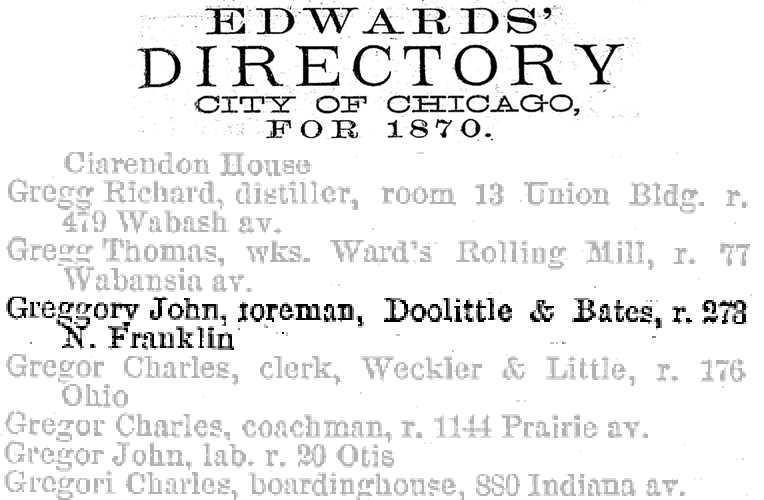 John Gregory (1822-1894) was a Great Lakes shipbuilder. He arrived in the United States in 1844 from Crossmaglen, County Armagh, Ireland and after he received his citizenship in New York in 1849, he relocated to the midwest. He was listed in Chicago directories as a shipwright, ships carpenter and shipbuilder from 1863 on. His only son, John S., was born in Sheboygan, WI on 26 Dec 1855. He has built over 20 ships, which Chicagology is currently gathering data.

In the 1866 Edward’s Annual Directory to the Inhabitants, Institutions, Incorporated Companies, Manufacturing Establishments, Business Firms, etc. etc., in the City of Chicago For 1866 John Gregory was a shipbuilder, presumably for Doolittle & Olcott at 384 S. Wells.

According to the Edward’s Annual Directory to the Inhabitants, Institutions, Incorporated Companies, Manufacturing Establishments, Business Firms, etc. etc., in the City of Chicago For 1870-71, John Greggory (sic) was listed as a foreman for the Doolittle & Bates ship yard, which was located at 384 Wells and 54 W. Charles. William Wallace Bates was a very influential shipbuilder from 1860 till the 1870’s.

The Empire Dry Dock Company of Chicago—capita; stock $20,000—filred articles of association with the Secretary of State to-day.

Most of Mr. Gregory’s ships were tugs, although he did manage to build a few schooners just prior to the domination of the steam ship. His last schooner, the Mary A. Gregory, was built in 1875 and was the very last commercial schooner to enter Chicago when she ran her last voyage in 1924. More details are beginning to surface in regards to the shipyards that Mr. Gregory used to build his ship, but it seems that the Doolittle & Olcott shipyard that he built the Mary A. Gregory was located on Goose Island. He also had another shipyard in Sheboygan, Wisconsin that was named Thayer & Gregory. In 1865 Mr. Gregory bought the Jacob Banta shipyard that was located at West Charles and Harrison streets. 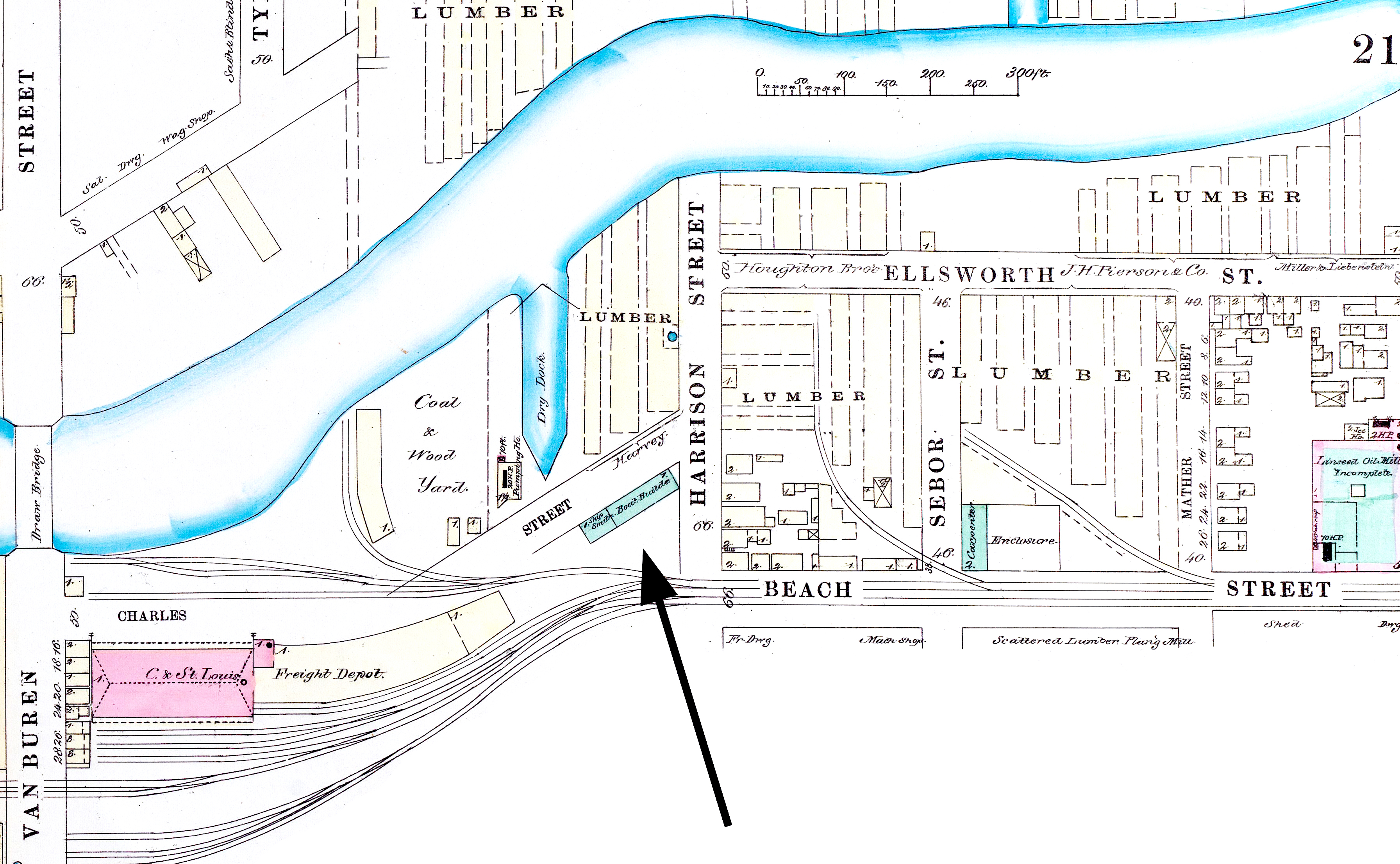 The largest and most important shipbuilder was Miller Brothers & Co., located on the Chicago River just above the Chicago Avenue Bridge. The firm built steamships, tugs, canal boats, and schooners. When the shipping industry was booming the Miller Brothers dry docks, the largest on Lake Michigan, were constantly occupied with ships being rebuilt while carpenters were busy with one or more new ships. The busiest time of year for new ship construction was in the late winter and early spring. Sailors idled by the close of shipping joined with the professional ships’ carpenters and caulkers to finish new vessels before the navigation season began again in April. Mr. Gregory built the A. B. Ward at this shipyard.

After the Great Fire of 1871, Mr. Gregory built his ships out of Sheboygan, Wisconsin while Chicago was rebuilding. When he returned in 1873, three out of the ten vessels that were built in Chicago were his. Overall from the period between 1873 and 1876, he was responsible for 13% of all ships built in Chicago. From 1878 to 1883 all of his vessels were built in Wisconsin. The most admirable was the John Gregory, built in 1878. The tug developed a fast and respectable reputation as described in the article below. His last, the Mariel, was built in Chicago.

The new tug John Gregory is proving herself one of thew most handy boats in the creek, notwithstanding the fact that she is considerably longer than any of the others, and many critics have pronounced her too long for work in our harbor. She has an excellent model, is well and smoothly built, and possesses excellent new machinery and great power. Mr. John Gregory, who designed and built the new craft, is to be congratulated on his great success, and the owners ought certainly to appreciate the fact that they have one of the most powerful tugs afloat on feesh water.

Ship Owners’ Dry Dock Company
The business that became known as the Ship Owners’ Dry Dock Company in 1901 began operations in 1855 as a partnership between E. M. Doolittle and Andrew Miller in Chicago, Illinois. Miller, born in Londonderry County, Ireland in 1820, was an experienced shipbuilder by the time he joined with Doolittle to purchase land on Goose Island in the north branch of the Chicago River for constructing a shipyard. Miller had built boats in St. John, New Brunswick and in Cleveland, Ohio before arriving in Chicago in 1848. Miller remained in Chicago until his death in September of 1881.

In 1860 the company was named the Miller Brothers Dry Dock Company and retained this name until 1901. The Miller Brothers Company developed a large clientele for repair work and tug construction, but seemed to be in chronic financial difficulty because of Andrew Miller’s unaggressive bill collection methods. Miller was known as the vessel owners’ friend and often left debts owed him to accumulate for lengthy periods. Business was good enough to allow expansion to three dry docks during the life of the company.

After Andrew Miller’s death in 1881, Thomas E. Miller and Bryce L. Miller ran the family business until 1900 when the decision was made to sell the company to the newly incorporated Ship Owners’ Dry Dock Company. Investors from Chicago, Cleveland and New York pooled resources to start the new shipyard. C.A. MacDonald and J.J. Rardon of Chicago ran the local affairs of the company. William W. Watterson was hired from Lorain, OH as the Bradley and James Corrigan of Cleveland were joined New Yorkers August Belmont and G.L. Boissevain as significant stockholders.

Financial and labor trouble hindered growth for several years. Robert J. Dunham was hired as president in 1903 in order to seek new construction contracts and labor agreements through his contacts. A new contract with the Ship Carpenters Labor Union was negotiated. Profits, however, remained lower than expected.

In 1907 the owners decided to sell the Ship Owners’ Dry Dock Company to the Chicago Ship Building Company. Over the next five years portions of the company were sold to the American Ship Building Company’s Chicago subsidiary. The Goose Island facility served as a repair yard until 1916 when the yard was closed. The dry docks were filled in when the Ogden Ave. Viaduct was built in about 1928. 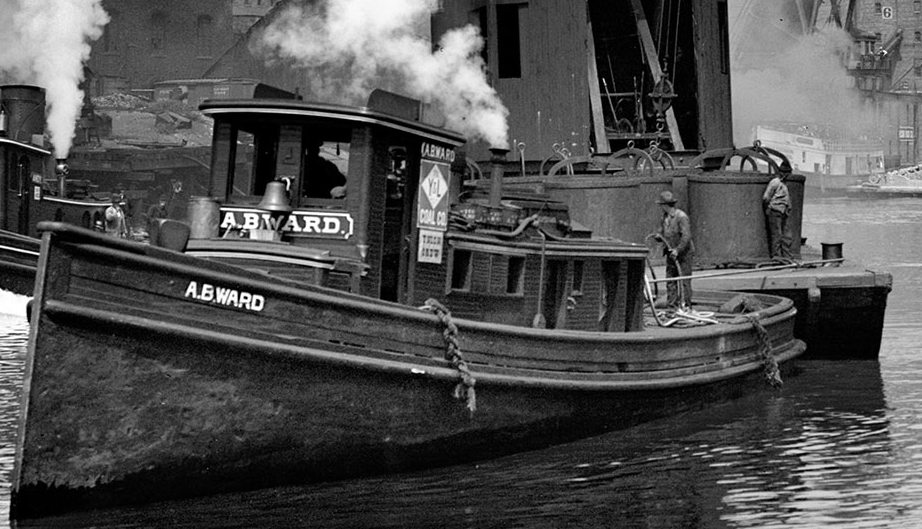 THE SHEBOYGAN DRY DOCK—We learn from the Sheboygan papers that $5,000 have recently been raised for the completion of the dry dock at that place. The work is now going on as fast as men and money can push it, and Sheboygan will soon rejoice in having one of the largest and best dry dry docks on the whole chain of lakes. A new and more effective plan of construction of the walls and floor of the dock has been adapted by the Board of Directors, and Mr. John Gregory, of Chicago, who has superintended the building of four dry docks in Chicago and elsewhere, and who is also an experienced ship-builder, has been employed as designer or architect in the building of the dock.

A NEW DRY-DOCK TO BE BUILT.
Some time since THE TRIBUNE announced that Mr. Orville Olcott was making preparations to construct a large new dry-dock on the North Branch, just below the dry-docks and shipyard of Miller Brothers. Mr. Olcott’s arrangements are so far completed that details of the enterprise can safely be given. The new dock will be situated on Lots 9, 9, and 10, Block 98, Elston’s Addition, or at the entrance to the Ogden Canal on the North Branch. It is to be 300 feet long, sixty-four feet wide at the top, and forty-two feet at the bottom, with a floating depth of twelve feet over the blocks. The pumping machinery will consist of two fifteen-inch centrifugal pumps of the celebrated White, Clark & Co., Baldwinsville, N. Y., make. Their lifting capacity will be 32,000 gallons per minute, and as the capacity of the dock is estimated at 1,500,000 gallons it will readily be seen that the pumnping-out process cannot fail to meet expectations. The pumps are to be operated by an engine of 150-horse power.

A decided advantage that this dock will possess over any others in the city is the control of 500 feet of river front, where a vessel can lie and undergo topside repairs without moving. This is a necessity that has long been felt. The firm engaged in the enterprise will be styled Olcott, Hannahs & Co. The dock is to be known as “Olcott’s Marine Dry-Dock.” Mr. Orville Orcott will act as agent, and the services of John Gregory, the well known marine architect, have been secured as master mechanic. The contract for dredging the slip that is to be converted into a dry-dock has been secured by Harry Fox & Co., who propose to begin work either to-day or on Monday. The estimated cost of the improvement, complete, is $25,000, and is to be completed by the 1st of October.

THE NEW OLCOTT DRY-DOCK
The dredging for Olcott’s new marine dry-dock was completed yesterday by Harry Fox & Co. The next work will be to place a coffer-dam at the head of the huge ditch and pump the water out so that pile-driving and sheathing may be carried on. The new dock will hardly be ready before the 1st of December. It will be the most eligible in the city, as the location is such that vessels can be run directly into it from below, without the necessity of winding. The boiler is already on the ground and pumps are well under way.

Work on Olcott’s new marine dry-dock at the lower end of Goose Island is making satisfactory progress. The dry-dock basin is being floored and lined, and the boiler engine, and centrifugal pumps are already on the ground. The dock will be ready for use by the 15th of December. 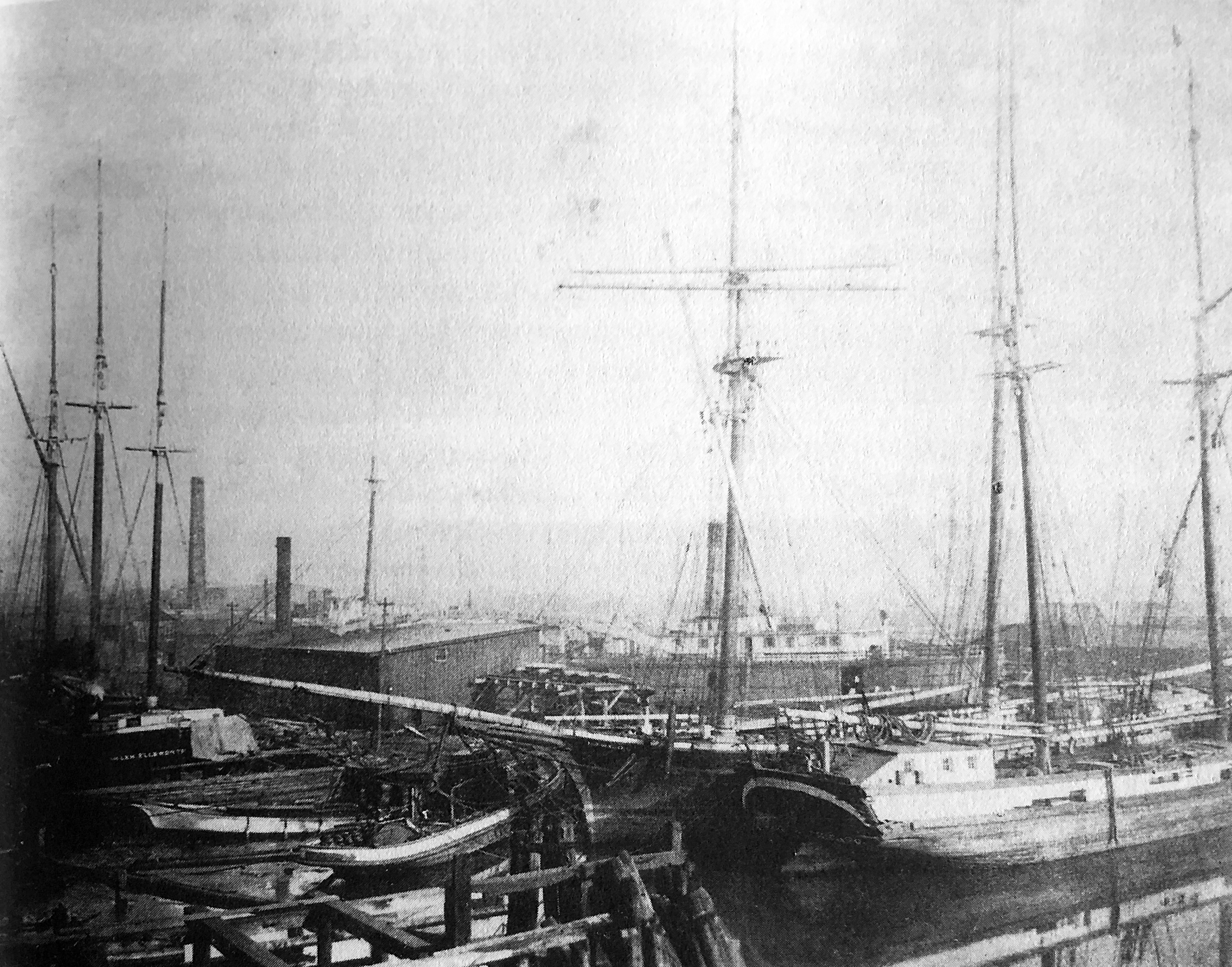 It will prove an item of interest as well as a source of gratification to Chicagoans generally that our English neighbors are sending hither for models of steam and sail vessels, besides ordering some built here, to do service on Lake Winnipeg. Somehow the fame of John Gregory as a marine architect reached the ears of the heads of the Hudson Bay Company some time since, and at their request he prepared the model of a steamer for a Lake Winnipeg route that proved in every way successful, both as to speed and sea-going qualities. Her average time upon a route 375 miles long has been but thirty-six hours. Recently Mr. Gregory received further orders from the same source, and in accordance with these orders he has just completed the model of a fore-and-aft schooner of 200 tons carrying capacity. She is to have 108 feet length of keel, 26 foot beam, and 8½ feet hold. Mr. Gregory will arrange all the preliminary details such as “laying down,” etc., here, and then send his foreman, Mr. John McCoy, to Fort Garry, to superintend the construction of the vessel. She is to be ready for service by the last day of June next.

Accompanying this order for a sail vessel were instructions to Mr. Gregory to prepare the model and arrange the preliminary details of a propeller to be 170 feet long, with 28 feet beam, and 10 feet hold, This propeller is also to be built at Fort Garry under the superintendence of Mr. McCoy, during the spring and summer months of 1881.

Mr. Gregory is also instructed to build, for service on Frazer River, a light draught side-wheel tug of sixty feet keel, sixteen feet beam, and five feet hold. This craft will be put together in Chicago, and afterward taken apart and shipped to Fort Garry in sections. The tug is to be supplied with a grouser or spur apparatus with which she can help herself over bars that exist in Frazer River.

It is altogether likely that when these several orders have been filled, Mr. Gregory will receive more of the same sort and from the same quarter.