New Steamboat.—Capt. Hawley now has plans complete for the new Bay steamer which he proposes to build this winter and have ready for business on the openin of navigation next spring. The plans and model were made by John Gregory, of Chicago, the builder of Mr. Briquelet’s tug, and are said to very artistic. The new steamer will be 135 feet keel, and 145 feet over all, 23½ feet beam and feet hole. Will have two engines with 18 in. cylinders and 48 inch stroke, with seven feet shell boiler eighteen feet long, and will be furnished with convenient cabins and all modern improvements. Capt. H. proposes to make the Bay business lively next season.

New Steam Boat.
Capt. Hawley has commenced in earnest the building of his new steamer for the Bay shore and Michigan trade, to take the place of the Union, so long and favorably known on these waters.

The new boat will be a model of a vessel and will be fitted up with all the latest improvements known to nautical science; built of the best timber, and constructed under the supervision of one of the most experienced builders in the country.

The boat will be 140 feet long, 22 feet beam, and 8 feet hold. The boiler is being manufactured at H. O’Leary’s boiler shop. It will be 7 feet in diameter and 17 feet long.—From these dimensions it will be observable that Capt. Hawley’s new boat when finished will be hard to beat on these waters.

Marine Matters.—Capt. Hawley’s new steamer is rapidly advancing at Fowles’ yard, Fort Howard. She will be very capacious and carry a large amount of freight. She is 20 feet longer and three feet wider than the Welcome. Her ribs are up and already make a good show from this side of the river. She is modelled by John Gregory and will be finished by the same man who finished the tug John Gregory. 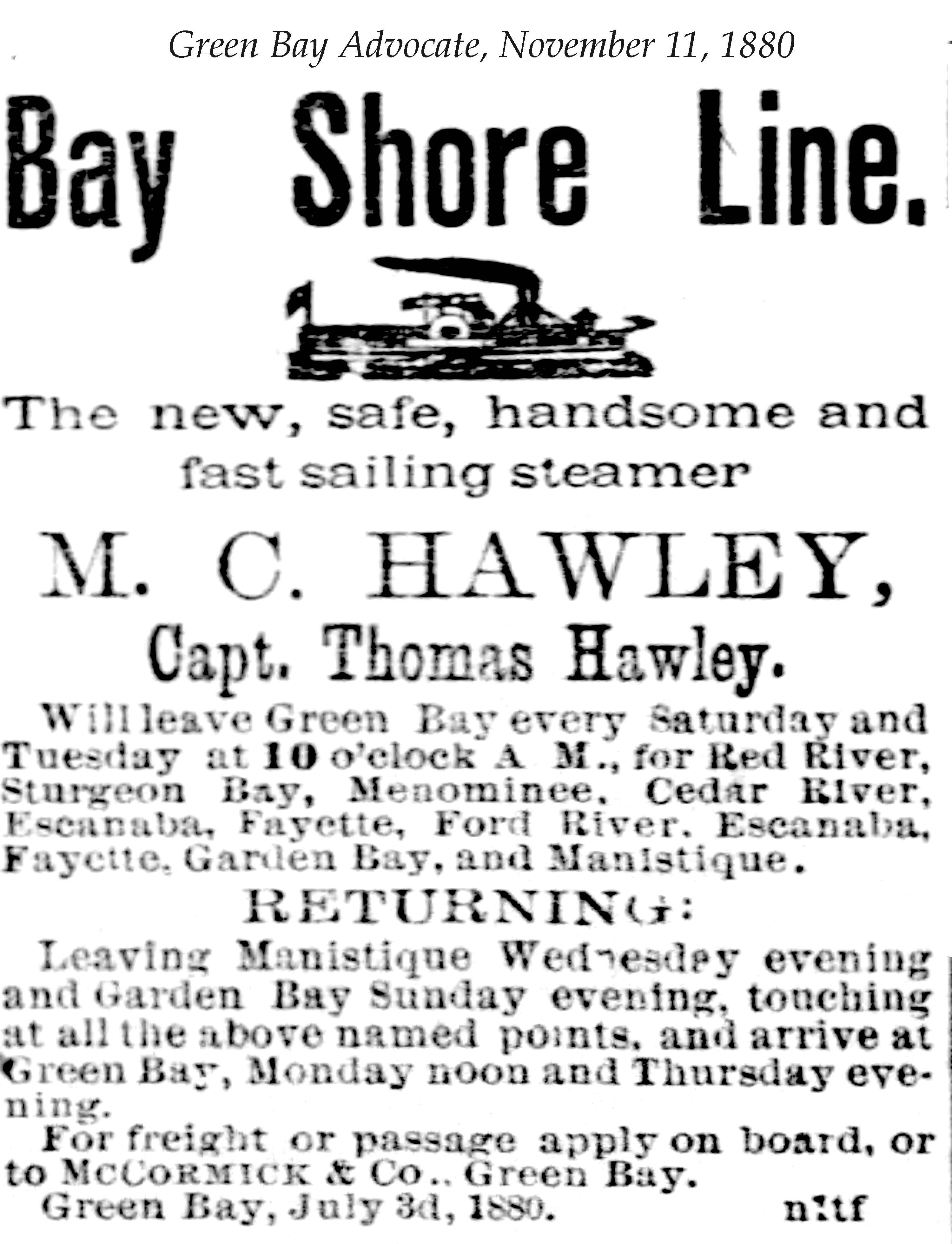 Thomas Hawley sold the steamer to McCormick & Co. of Green Bay on October 12, 1882 for $13,000. The steamer ran the route between Green Bay and Manistique, Michigan in both the passenger and freight trade. Thomas Hawley bought the steamer back on October 2, 1885 for $10,500 ($16,500?). The steamer was being run between Ashland and other Lake Superior ports, but Capt Hawley wanted to use her for her old Green Bay routes.

The M. C. Hawley (US No. 91228) was the only sidewheeler built by John Gregory. Sidewheelers are also known as a paddle steamers which were very common along the Mississippi River. Boats with paddle wheels on the sides are termed sidewheelers, while those with a single wheel on the stern are known as sternwheelers.

The bay steamer M. C. Hawley, which stops at this port (Sturgeon Bay), has a horrible whistle. It is just like the the one the tug O. B. Green used last year, and all The Tribune readers in Chicago will doubtless remember what kind of a thing that was.

The name of the steamer M. C. Hawley has been changed to the City of Green Bay 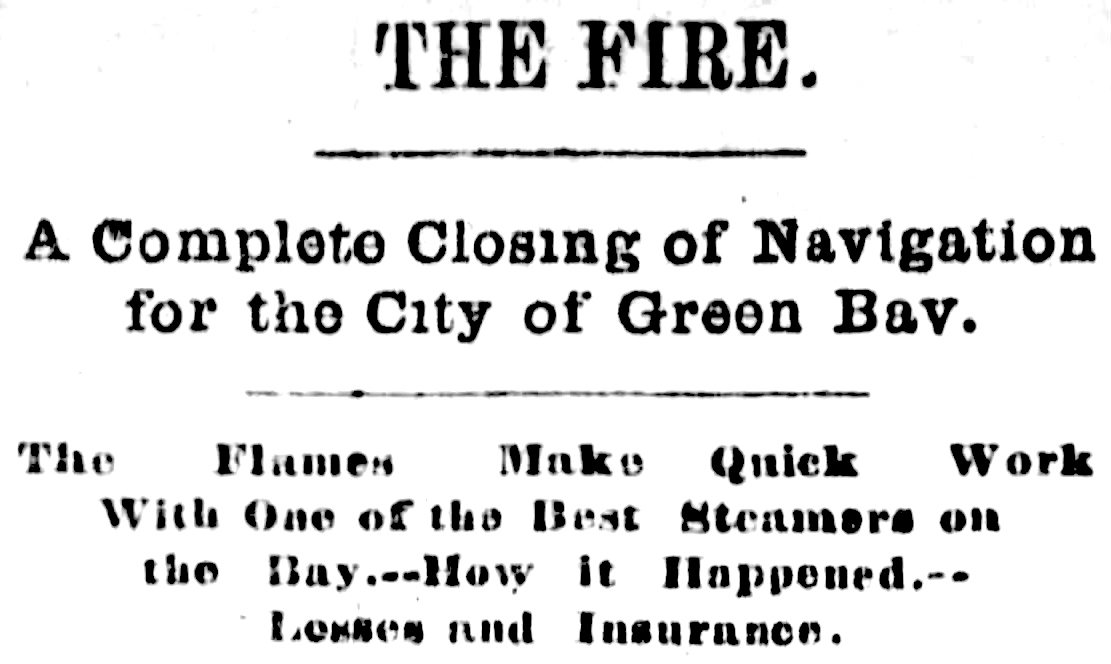 This morning at ten minutes of two o’clock the fire bells rang out their warning notes. On striking a bee line for the lighted heavens in the vicinity of the Main street bridge one brought up at J. McCormick’s docks. There lay the steamer City of Green Bay, which had only arrived the evening before, in a mass of flames. The firemen, with their customary promptness, got two streams of water upon the boat. It was nip and tuck for a considerable time as to which would gain the mastery, the flames or the fighters. Finally the darkened heavens indicated who were the victors and the fire laddies were seen going home in time for breakfast, leaving a long, blackened hull behind them. The fire is reported by the midnight watch, attached to the boat, to have started under the boiler some time about two o’clock. The first thing that was known of its presence was the shooting out of the flames in all directions from the center of the boat. So rapid did the hire spread and so hot was it that the crew escaped with difficulty.

Vigorous efforts were made by the crew. firemen and bystanders to save the effects of the boat, together with its cargo. It is said that one man was handling a freight truck so near the fire that the wood was partly burnt off of it. The wind was in the south-west at the time of the fire but notwithstanding, it spread both ways from the center, completely demolishing that part of the boat above the hull. The engine is bent and twisted from the heat, while the boiler seems to be in fairly good condition. The furniture of the boat was almost a total loss, so also was the perishable merchandise loaded forward. A heavy freight of water pipes and band iron was loaded aft and were hardly damaged either by fire or water, while a carload of nails stored forward in the boat were damaged by being mixed and by rust. The boat had only been at the dock a few hours and the accounts for the comparatively small amount of freight she had on board. There was not over $1,500 valuation at all; about one-half of this amount is a probable loss. It consisted of crockery, glassware and hardware, left here by the Grand Traverse for transfer to Manistique. There were also some flour and millstuffs on board and a small amounyt of merchandise shipped by local dealers.

The history of the City of Green Bay is familiar in marine circles. She was built in 1880 by Captain Thomas Hawley, and she was at that time called the M. C. Hawley. She was afterwards sold to M. J. McCormick and James and Hugh L. Dougherty, her name being changed to City of Green Bay. She was taken up to Ashland and run on the circuit of the pleasure route, and the towns of Ashland, Bayfield and Washburn. She was later repurchased by Captain Hawley and brought back to her old run between Green Bay, Mainistique and intervening ports. She is at present rated by Inland Lloyds as A2 valuation of $16,000 with a tonnage of 172 tons. She is commanded by Captain Pinckney Roulet. She carried no marine insrance but was covered by eleven thousand dollars fire risk by Smith and Davis agency, . of Buffalo, in the following companies:

It is not known how much insurance was on the cargo. It is estimated roughly by ship owners that her loss will be about two-thirds of her valuation.

The steamer City of Green Bay, whose upper works were burned in 1887, has since that time stood on her ways in the shipyard. Capt. Hawley is now making arrangements to have her again placed in thorough repair. The hull is quite good condition, the machinery will need repairing.

Capt. Hawley says he hopes to have the steamer City of Green Bay transformed into a steambarge and ready for business in about six weeks. The upper works will be torn off, a screw put in, and other necessary changes made in order to put her in good order for a freight-boat. She will run on the bay and lakes.

In 1889 she was converted from a sidewheeler to a prop. The conversion was done in Manitowoc and was started in January of 1889 and was ready for launch on 11 August 1889. It was christened as The Dauntless, but that name was never registered.

On 19 August 1909, the vessel burned at Whistler’s Point, Saginaw Bay, Michigan with eight persons aboard. No lives were lost.