The O. B. Green was the one of the first tugs built for Oliver B. Green by shipbuilder John Gregory. According to the 1874 Chicago Directory he was operating a dry dock which meant he would need tugs to bring in broken ships to repair. In May, 1865 the 40.71 ton O. B. Green (US No. 18913) was launched. She had some large repairs done in 1872. Chicago Tribune, November 9, 1878 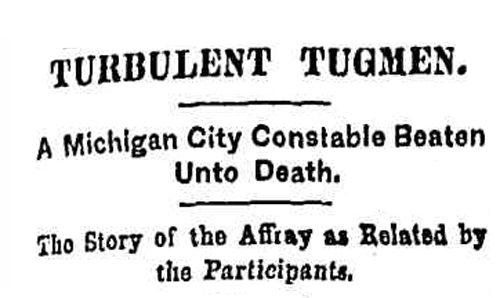 Shortly after 2 o’clock yesterday morning a dispatch was received by Police-Supt. Seavey from Theodore Smith, City Marshal of Michigan City, Ind., asking him to arrest the Captain and the crew of the Chicago tug O. B. Green on her arrival here from that place on the charge of murder. The telegram was sent to Capt. O’Donnell, and Officers Casey, Meehan, Madigan, and Kipley were detailed to attend the matter. The tug arrived about 7 a.m., and went up to Singer & Talcott’s stone-yard with the two scows which she had towed down. The officers followed her up, and, on her return to LaSalle street, arrested Capt. Edward E. Napier, Charles McCarie, engineer, Frank Walker, linesman, and a boy. The prisoners were taken to the Armory, and subsequently Detectives Heinzman and Aldrich found Thomas Hoddy, one of the firemen on the Green, at a saloon on the corner of Kinzie and Kingsbury streets, and took him into custody, and also locked him up at the Armory. William Dalton, another fireman on the tug, was not apprehended. A Tribune reporter learned that an officer had been killed at Michigan City in a melee Thursday night, in which the prisoners were engaged, and which was the cause of the arrest.

CAPT. NAPIER
was interviewed, and informed the reporter that on the previous evening he was in company with Capt. J. A. Manning, who has charge of the harbor work for the Government at Michigan City,—for which the Green has been carrying stone,—and Capt. Campbell, of the tug Waters, and they had stepped into a restaurant to get some oysters.While thus engaged the engineer, McCarie, came in and informed him that some men were endeavoring to arrest Roddy and himself without showing any authority. Capt. Napier immediately started out to learn the cause of the difficulty, and found two men in charge of Roddy, neither of whom would show him his authority for detaining Roddy and McCarie, nor would they give the Captain to understand that they were acting under the authority of the law. Hot words led to blows, and a large crowd gathered around the excited group. During the wordy warfare some one near the Captain struck some one else, and a free fight ensued, in which the Captain received a few blows, and was forced to fight his way out of the crowd and to the tug. His crew also succeeded in getting away from the scene of the fray, but were pursued by a number pf infuriated men. The engineer was suffering from a severe wound on the left side of the head, just above the eye, and was unable to attend to the engine. One of the firemen took his place, and the boat left for Chicago. On the way, Roddy stated that he had used a railroad coupling pin in the fight, and had struck several, including McCarie, with it, and injured him severely. The Captain also said he saw no one hurt with a weapon of any kind, and did not think the affray was as serious as it afterwards appears to be. He thought at the time of the attempted arrest that the matter could be quietly settled, and he endeavored to get his men to remain peaceable and go back to the boat. Capt. Napier has the reputation of being one of the bravest tugmen in the harbor, and has saved vessels and crews in distress by his pluck and skill on several notable occasions. His arrest caused considerable surprise in marine circles.

THOMAS RODDY,
the fireman arrested, is said to be the person who wielded the coupling pin with such alleged terrible effect as to fatally injure one of the Michigan City officers and severely hurt another. He was interviewed, and stated he was arrested by two men, who would not show their authority, and when the engineer appealed to the Captain, and the latter came on the scene, a free fight ensued, in the course of which he picked up a coupling pin to defend himself, and, seeing a man present a revolver at the back of McCarie’s head with evident intent to fire, he struck the former with the coupling pin, and the blow missing its mark, fell upon the head of his friend, and wounded him as above reported. He said he struck no one else, but was knocked down during the fihht, and, although hotly pursued by several men, managed to reach the tug. He said he had been drinking some, but was not drunk at the time of the melee.

CHARLES McCABLE
the engineer, informed the reporter that the Captain of the steam-barge Trader had caused the arrest of Roddy by a man who would not state whether he was an officer or not, and on his (McCarie’s) interfering in the matter he, too, was seized by another man, but managed to get away and inform Capt. Napier, who also questioned the men as to their authority for making arrests, for the reason that he was required to leave port that night and would need the engineer and firemen. But the men questioned refused to show their badges or stars, if they had any, and when the fight began, one of them held him (the engineer) around the waist with both hands and arms, and while in that position, Roddy struck him on the head and laid the scalp open with some kind of weapon which he did not see at the time. He broke away from the man who had held him, and, after a struggle, reached the boat. His wound was dressed by a surgeon after his arrest here.

Walker, the linesman, and the small boy arrested along with the others were not in the melee, being left in charge of the tug by the Captain.

Dalton, one of the firemen accused of having a hand in the fight, was along with McCarie and Roddy when the trouble began.

CAPT. MANNING
arrived by train from Michigan City yesterday forenoon, having left there art 7:00 a.m., and stated to the reporter that Policeman Heiser and Constable John Taylor had been injured—the latter severely—in the fight with the tugmen the night before, but he had heard of no one being killed. He was on the outside of the crowd that gathered during the affray, and took no part in it, nor did he see any weapons used. Taylor had been rendered insensible by a blow he learned after the fight was over, but he had not understood that he was dangerously injured.

Thomas Roddy, the young man said to be the principal in the alleged murder or manslaughter, is of Irish birth, 21 years of age, and formerly lived at Baltimore. He is a short, thick-set person, with dark red hair, and a smooth, freckled face. So far as known yesterday he had not been arrested before for any crime or misdemeanor. He had been employed as fireman on tug-boats for several years in this harbor and on the lakes.

Those of the prisoners wanted by authorities of Michigan City will probably be delivered up by Supt. Seavey on the presentation of the necessary requisition from the Governor.

City-Marshal Miller, of Michigan City, arrived in this city last evening to look after the case, and reported at once to at police headquarters. It is designed to take the entire crew back to Michigan City, and the Mayor W. R. Hutchinson, has already taken steps to get the proper requisition papers. The Marshal knew but little concerning the affair, except the story that was prevalent about his home, and, as it agrees in the main with that already related by Capt. Napier and his men, it is doubtless true. Briefly, during the absence if Capt. Napier from his vessel while in port, the steam-barge Trader kept her screw in motion, thereby disturbing the water and shifting about the scows which the tug had had in charge. One of the men, supposed to be Ruddy, halloed to the Trader to stop, but, receiving no reply, went over and had some words, if not a fistic encounter, with her Captain,. At all events, the Captain and his friends and Constable John Taylor appeared on the tug a little later, and Taylor pretended to arrest Ruddy. The tugmen objected, and it was finally agreed that the party go up town to find Capt. Napier and Capt. Manning, the agent of the Government. On the words with the Constable, and by the time that the two Captains had been found in a restaurant so the main street war raged hotly between them. A police officer named Henry Hozier came up to them while in front of the restaurant, and demonstrated with McCarie for using such filthy, abusive, and disorderly language, and for creating such a disturbance, as it was then after 11 o’clock. Hot words passed between all the participants, and the fight was begun by some tugman, Dalton, presumably, striking a citizen. This citizen, Matt Sulzer, is the man responsible for this Michigan City story. He also states that Capt. Napier knocked down the Constable, that McCarie jumped upon him and beat and kicked him severely, and that Ruddy used a railroad coupling pin freely. When the tugmen retreated to their boat and left the port it was found that Taylor was seriously and perhaps fatally injured. His skull was fractured in several places, his chest was badly caved in, the collarbone broken so badly that he is unable to swallow. His condition was pronounced dangerous in the extreme by the physicians. The policeman, Hazier, was badly wrecked, and suffered some severe contusions and a broken jaw on the left side of the head, and Matt Sulzer received a deep gash upon the head. The Marshal will report at police headquarters this morning.

During March of 1881, the tug was imprisoned in the ice off of Chicago. Fortunately she had on board a month’s provisions and five tons of coal. On 28 Nov 1878, she raced another John Gregory-built tug, the Alert (US No 105414) and won. She was also known as the “Old One” among the sailors, probably because a second O. B. Green was built. According to the Chicago Tribune, on Wednesday, April 1, 1881 the name and papers of the tug O. B. Green were changed. She will hereafter be known as the Commodore. Mr. Green’s new tug is to bear the name of O. B. Green. Hence the change, which was arranged by mutual consent. 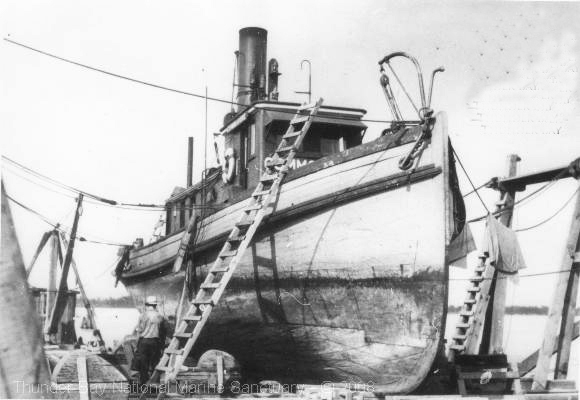 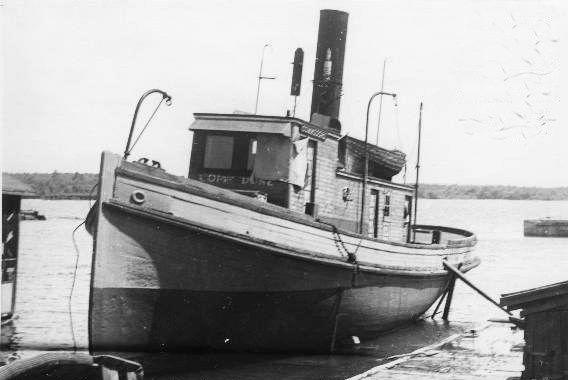 Commodore on 14 Sept 1946 at Thessalon, Ontario 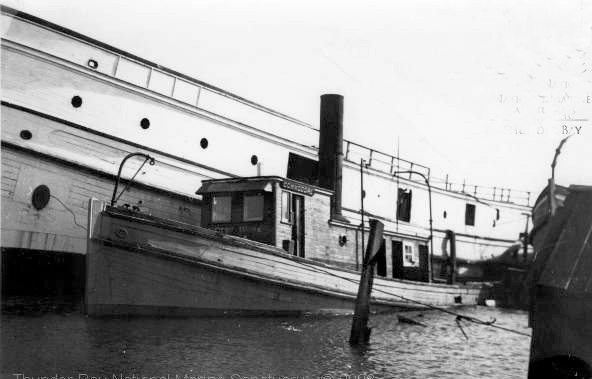