NEW TUG.
The Thos. Brown is the name of a finely constructed tug that was launched, yesterday afternoon, from the yard of Doolittle & Bates, in the South Branch. The following figures show her dimensions:

In 1871 the tug’s builder was listed as “J. Grager” and as “J. G. Granger”, which are very likely phonetic spellings of “Gregory”.

THE STORMY WEATHER.
The Tug Tom Brown’s Experience at the Piers.
During the day yesterday the wind changed from northeast to north and northwest, and a heavy sea was running outside. The schooner B. Parsons, which passed in during the afternoon, had a bad list, and it seemed as if she had water in her hold, though it could not be positively learned that such was the case. Most all the arriving craft reported the weather outside as “uncomfortable.” (Of course it is not expected that masters will sacrifice their reputation as “sea dogs, afraid of nothing,” by confessing that it blew a gale. They were glad enough to get into port, though, all the same.”

Last evening, while the tug Tom Brown, one of the very best boats we have, was rounding into the harbor from outside, a sea boarded her, crushed in her engine-room door and filled the deck and engine-room with water. She shook the water off her deck, however, and brought that n the hold into the harbor with her. When the sea boarded her the shock threw Mr. Watson, the engineer, on his face and hands, and, besides his drenching, he was so unfortunate as to have a nail penetrate one of his hands, making a most painful, as well as a dangerous wound. The engine-room door was reduced to splintersby the fiorce of the sea, but otherwise the tug is uninjured.

UNION LINE OF TUGS.
The list of tugs that will form the Union Line the present season is now about complete. As will be seen by the array of names appended, the combination is a formidable one:

Negotiations are pending for the purchase of another powerful to be added to the fleet. Should they be consumminated the fleet will c onsist of eighteen boats, all but four of which range from medium to the largest size harbor tugs. 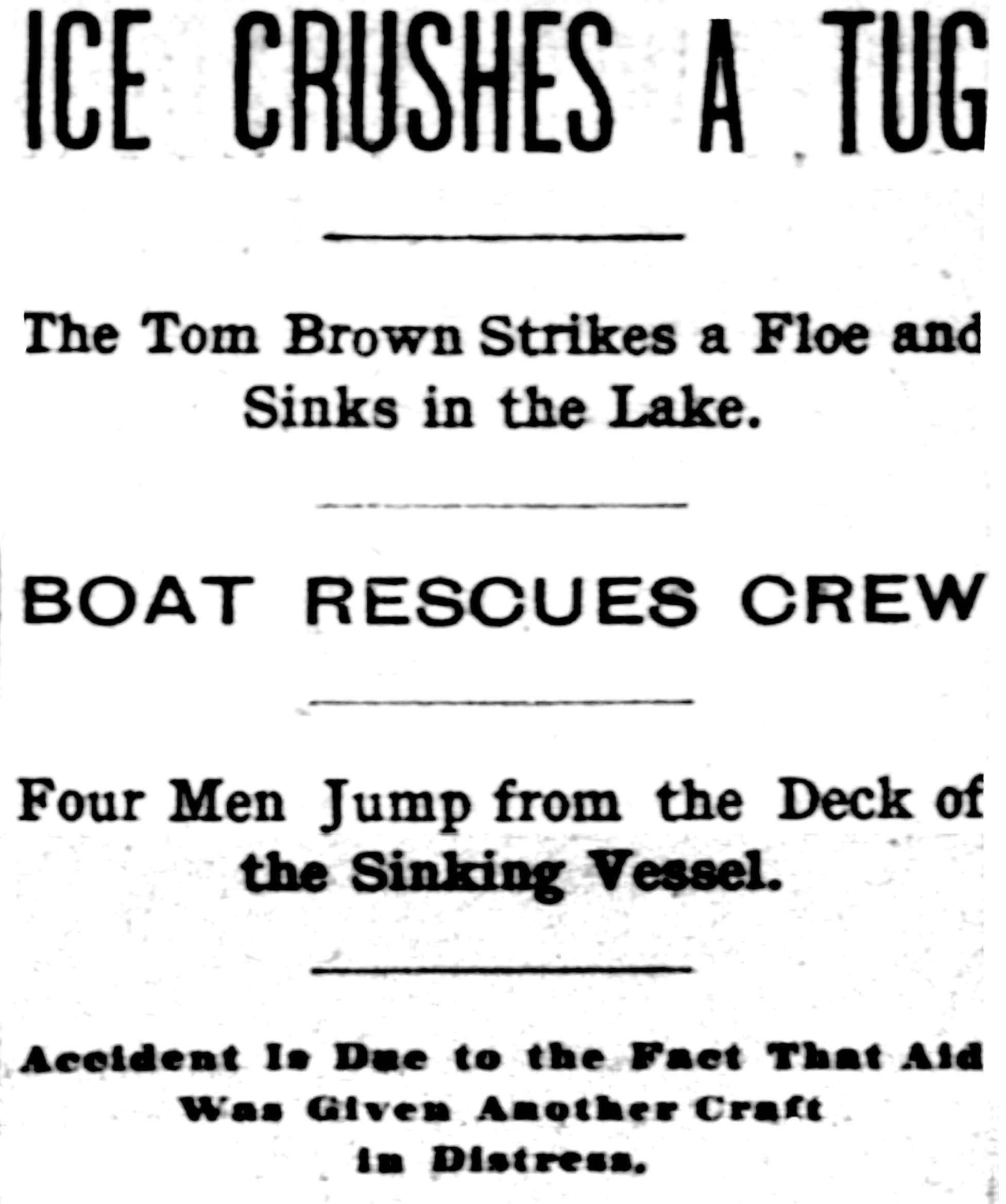 The tug Tom Brown was sunk yesterday afternoon in the lake, about two miles out from the mouth of the river, ands her crew had a narrow escape from drowning. The men were rescued just before the deck went under by the crew of the tug Robert E. Burke. The Tom Brown had heard the distress whistle of the Robert E. Burke, owned by the Barry Bros. Transportation company, and had gone to its assistance. The tug Burke was stalled on a windrow, and the Brown, after pulling it clear, was caught in the moving ice.

The force of the ice crushed in the heavy plank sides of the Tom Brown and nearly caught the fireman. The tug was manned by Captain John Sweeney, First Mate Robert Harmond, Engineer, H. Castleman, and Fireman William Hank. The Robert E. Burke pushed her bow hard to in the fast-sinking tug and the men jumped for their lives. The accident took place so quickly that the men on board hardly realized the situation.

Members of both crews said that it would have been absolutely impossible for the boat to escape the avalanche of ice. Captain James Barry of the Robert E. Burke said that he expected never to see any of the crew alive, for if the men had been thrown overboard in the grinding mass of ice they would have met instant death. “From the time the ice struck the tug until the craft was out of sight seemed less than a minute,” said the captain. The Robert E. Burke in going to the rescue was placed in danger, but being a much heavier craft experienced no trouble, as the Tom Brown had broken the great force of the solid wall.

The Tom Brown was remodeled last spring and was considered a good, strong boat. It was valued at about $5,000 and owned by Captain William Harmon, who carried no insurance. Captain Harmon is one of the old-time tugmen of the lake, having followed the business for nearly fifty years, but it is said that the loss of the Tom Brown means financial ruin for him. He accepted the loss bravely and said that the boat had gone out to assist another tug in distress and that he never refused to place his property or his life at stake to give relief.

The Tom Brown had met with other accidents recently and had caused its owner a great deal of loss. It was the Brown that let the big freighter get caught in the current of the river and block navigation until the water had to be shut off in the canal.

Diver To Risk Cold Plunge.
“Dutch Fritz,” the diver, who claims that his name is known only to six people in Chicago, will make the necessary preparations for the raising of the of tug Tom Brown, sunk in Lake Michigan Tuesday, as soon as the wind from off shore clears the ice floes away. The tug lies at the bottom of the lake, about a mile off the shore line, at Madison street. It is the property of Captain John Harmon, and a hole was stove in its side while assisting the Robert E. Burke to ram a passage to the harbor from the two-mile crib. The diver, at a propitious time, will rig a chain net under the vessel, which will enable a pair of pile-drivers to lift it. “Dutch Fritz” has been a diver here for twenty years.