The “John Leathem.”
Steam having been gotten up while the tug was yet on the stocks, the craft was allready to make her maiden trip; but this part of the programme was not a success owing to some slight accident to machinery, and she only made a short run, when she returned to her dock, where she is receiving her finishing touches.

The Leathem was christened after John Leathem, one of the members of the firm of S. & Co., and (like him) is a staunch, powerful and commodious craft. She was built by Messrs. S. & Co. from designs and specifications furnished by Capt. John Gregory, of Chicago, one of the best ship-builders on the lakes, and under whose immediate supervision she was constructed. The boat has been built with especial reference to strength and speed, both these essential requisites have undoubtedly been secured to the fullest extent. The material employed in her build is the best obtainable, and nothing has been spared in this direction; while the beauty and symmetry of her model as she sits on water like a thing of life, will convince the most casual observer at once that this desideratum has been obtained.

The hull of the new vessel is 74 feet keel and 84 ft. over all; 16 ft. breadth of beam, and 9 feet depth of hold. The motive power comprises two locomotive engines—cylinders 20×39½ inches each—of a combined power of 275 horses; and the boiler is of a sufficient capacity to furnish the necessary steam at all times. The wheel is 7 feet in diameter. All of the machinery was taken from the old (George W.) Tifft (US No. 10317), and is nearly as good now as the day it was set up in the old craft.

The Leathem made a trip to Red River last Sunday, during which she gave satisfactory evidence of the speed which is in her. The distance is fully thirty miles which she traveled in three hours and fifteen minutes, with not over 65 lbs. of steam at any time. That this time will be improved about 25 per ct., when she gets down to business, there is not the least doubt. Then look out for fun.—Door Co. Advocate.

The Sturgeon Bay tug Walter B. Leatham (sic) assisted in towing the Favorite’s barges to this port. She left to return to Menominee with them last evening. The Leatham has a clean-cut Gregory model.

RESCUE OF THE TUG LEATHEM.
Special Dispatch to The Chicago Tribune

STURGEON BAY, Wis., Oct. 31.—The tug John Leathem, which went ashore last Sunday at Whitefish Bay while working at the stranded schooner City of Woodstock, was finally released last night by the powerful tug John Gregory and towed to this port. Part of the Leathem’s upper works were carried away, her steering-gear demolished, and her engine and boiler shifted out of place. The damages is estimated at $1,000. The insurance agents having intimated their unwillingness to pay damages if the Leathem was wrecking at the time of the mishap, the owners will employ marine counsel in case the companies refuse to foot the bills. The policy does not prohibit wrecking, and a higher per cent is paid on the Leathem policy than is paid on the tug Gregory with wrecking privileges, both being insured with the same agents and company.

ALSO THE CITY OF WOODSTOCK.
The tugs Tornado, Tillson, John Leathem, and John Gregory have been working at the stranded schooner City of Woodstock during the past week. The tug Leathem grounded and was thus disabled. The Tillson dredged a channel to the schooner about 300 feet long and nine feet deep, and got fast within ten feet of the vessel’s bows, and it took the efforts of two tugs to release the Tillson. The Tornado, Gregory, and Tillson have been working at the Woodstock to-day, and she was pulled off this afternoon. The Woodstock has the Sturgeon Bay stem-pump on board. She will be towed to Manitowoc tomorrow.

The Manistee Iron Works Company, of Manistee, Mich., has closed two contracts for marine work during December 1891. A 380 HP fore and aft compound engine 14 x 28 x 26 inches, will be built for the tug John Leathem of Sturgeon Bay, Wis., and the engine in the barge Francis Hinton US No. 120754), belonging to Truman & Cooper of Manitowoc, will be compounded. The latter is to be a steeple compound with low pressure cylinder on top. This company’s upright independent air pump and condenser will be placed in both these boats. The engine for the John Leathem was built by Manitstee Iron Works of Manitstee, Michigan.

She was owned by the Edward Gillen Dock, Dredge & Cons. Co. of Racine, Wisconsin in 1914.

She was renamed Holliswood in 1921.

The Holliswood was stranded on 10 October 1925 at Bergen Point Lighthouse, New Jersey. 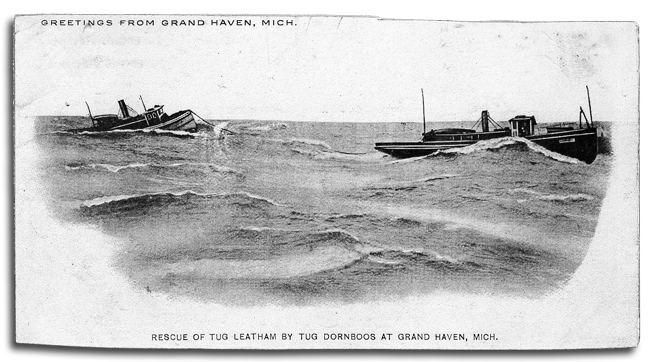