The large lake tug Joseph Perrett (US No. 76400), which was built in the Rand & Burger shipyard at Manitowoc (known today as Burger Boats) in 1881 by John Gregory, for the Marinette Barge Line Company, received her machinery and completion at Twenty-second Street. She was 160 feet long, 29 feet beam, and 13 feet hold, of 537 tons. She was provided with two compound engines of, respectively, 27 and 44 inches diameter and 40 inches stroke, built by the Detroit Dry Dock Company. She has a marine tubular boiler of 11 feet in diameter and 17 feet in length, of Otis steel, 47 inches of a tensile strength of 60,000 pounds to the square inch. She was allowed a steam pressure of 85 pounds. Her cost was upwards of $40,000. She was commanded by a worthy gentleman, after whom she was named, who will begin the season’s operations at once. She was first enrolled on April 18, 1882 at Milwaukee. WI. 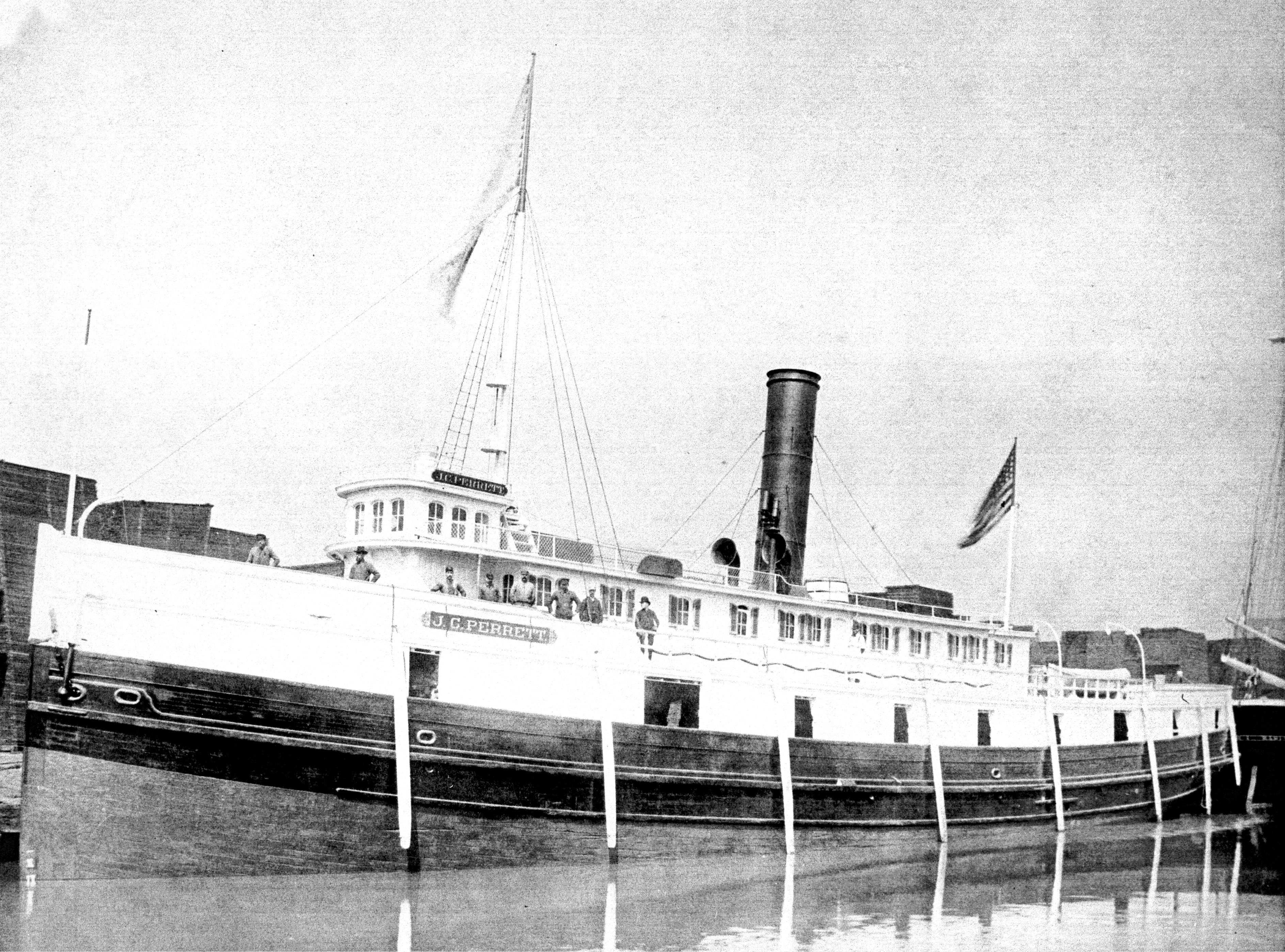 TO BE BUILT HERE.
Although no definit announcement has yet been made, it seems to be taken for granted in well-informed circles that the new tug for the Marinette Barge Line Towing Company will be built here by the Miller Brothers. She will be of the same dimensions, and in every other respect except machinery a perfect counterpart, of the Peshtigo Company’s tug now on the stocks. Capt. Joseph Perrett, who has charge of the tug Bismarck and barges comprising the Marinette Company’s fleet, is at present absent In the East examining machinery, with the view of the latest improvements in that line. It is proposed to make her the peer of all the large tugs on the lakes.

The new tug Perrett and a tow of four barges, and the Favorite with four barges, left again yesterday for Menominee. The Perrett is spoken by all as a most powerful beauty, and her designer, John Gregory, is given great credit.

The new tug J. C. Perrett, to take the place of the Bismarck, arrived on Monday of last week. She is one of the best tugs on the lake and belongs to the Marinette barge line. The hull was built in Manitowoc and fitted up in Chicago. The Bismarck is towing temporarily for the Peshtigo Company.

DUMONT AGAINST LIFE-SAVING.
Another Case In Point.
Speaking of Steamboat Inspector Dumont’s order against the tug Perrett carrying passengers, the printers made the reporter say yesterday that “the Perrett, could not, under penalty, carry any one, not even a member of the crew.” Mr. Dumont may go as far as that, but he hasn’t yet. What the reporter wrote was “Could not carry any one not a member of the crew.

Inquiries ware made yesterday for a, young mad named Lane Jackson, who. “might have been out on the lake for a pall on Sunday.” His boat is missing, and it is feared he has been lost. This is, without, doubt, the man the tug Perrett passed on Sunday night off the Marine Hospital.

The Perrett having been notified that she must not take any one aboard as a passenger, not even her owners, under penalty of $500 fine, the captain did not dare pick the man up. His little craft may have lived and be been picked up by some outbound craft, but if so the fact is not yet known.

The instructions to the harbor tugs are also that under no circumstances are they allowed to take anyone on board, except members of the crew, unless they have special excursion licenses. A few of the tugs have these special licenses, but most of them are without.
The owners say they don’t want to do any excursion business: that they simply tow, and that they are not going to expense for the privilege of burning coal and going out of their way to save lives.

At the Milwaukee Ship-yard on an afternoon in August 1883, the 360 ton scow-barge which has been on the stocks for some months was launched. She was named the Fred Carney (US No. 120559). Her dimensions were: Length, 150 feet; beam, 30 feet; hold 10 feet 6 inches. She was a finely modeled barge, and was able to carry about 500,000 feet of lumber. She was completed and ready for sea on Sept. 1. Her owners were the Marinette Barge Line Company, and she was towed with the other barges of the line, in the Chicago lumber trade, by the tug J.C. Perrett.

The large three masted schooner Bertie Calkins (US No. 2915) collided with the J. C. Perrett on 25 June 1885. Both ships were damaged, but made a port. 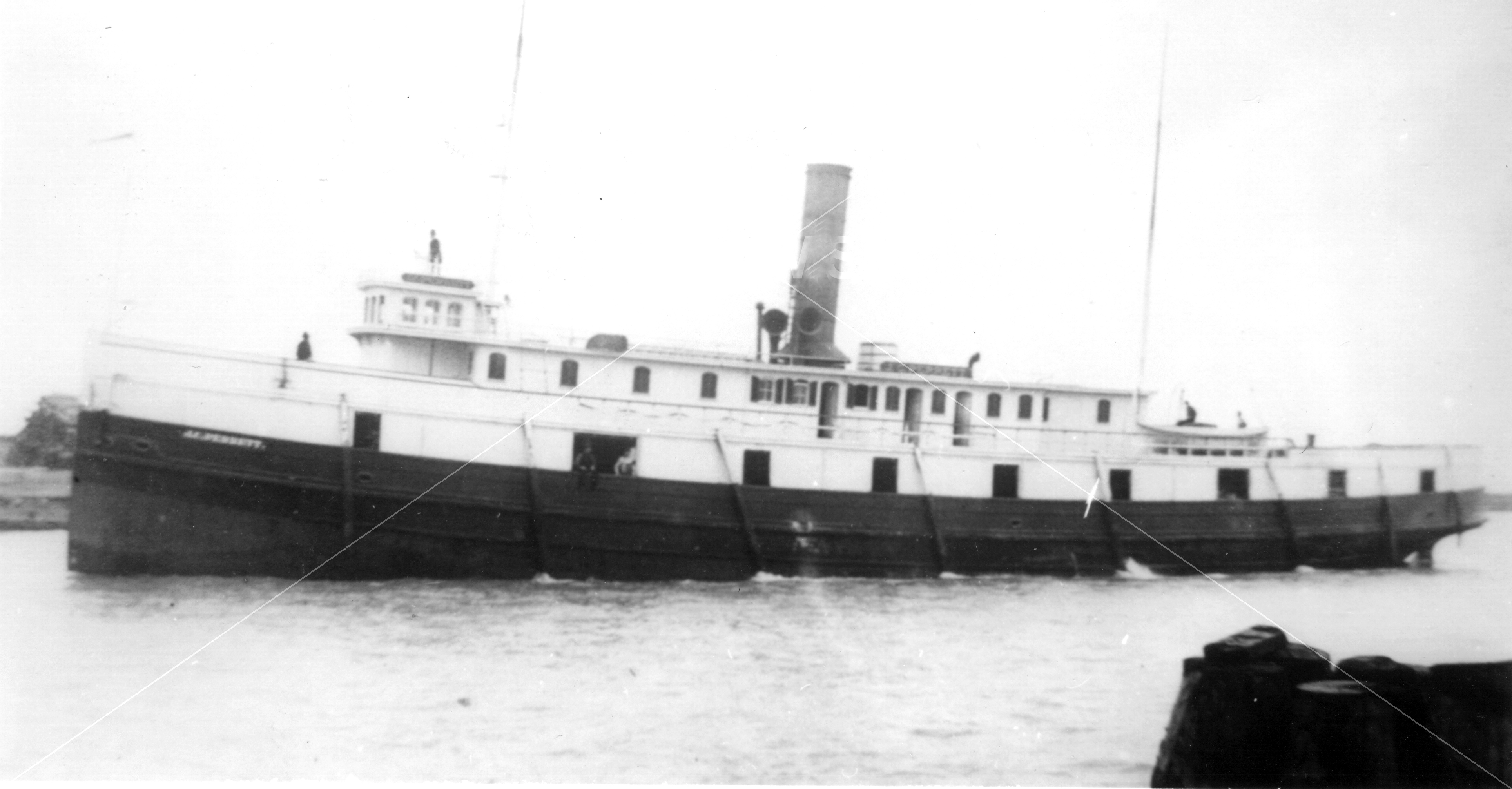 Car Ferry to Chicago Established.
The tug J. C. Perrett, the most powerful boat of its kind in the lakes, has been chartered to tow the Wisconsin and Michigan car ferries between Peshtigo and Chicago. The first of the ferries is expected here by the end of the week. The Perrett is now at South Chicago being overhauled for active service. With the two ferries in tow the Perrett can probably make eight miles an hour. the boats carrying forty-eight loaded cars. Car ferries have been successfully operated across Lake Michigan, but this is the first project for bringing them into Chicago in direct competition wid the railroads between Chicago and Green Bay

Sturgeon Bay, On 1896 May 21 while passing through the canal this evening Car Ferry Transfer NO. 1 in tow of the tug J. C. Perrett, collided with the United States dredging plant. Holes were stove in each of the two dump scows, and the dredge was also damaged considerably. The ferry was not damaged much, and proceeded on her way to Chicago. The accident was caused by having too long a tow line between the Perrett and the ferry. The damage to the dredging plant foot up to about $1,000. 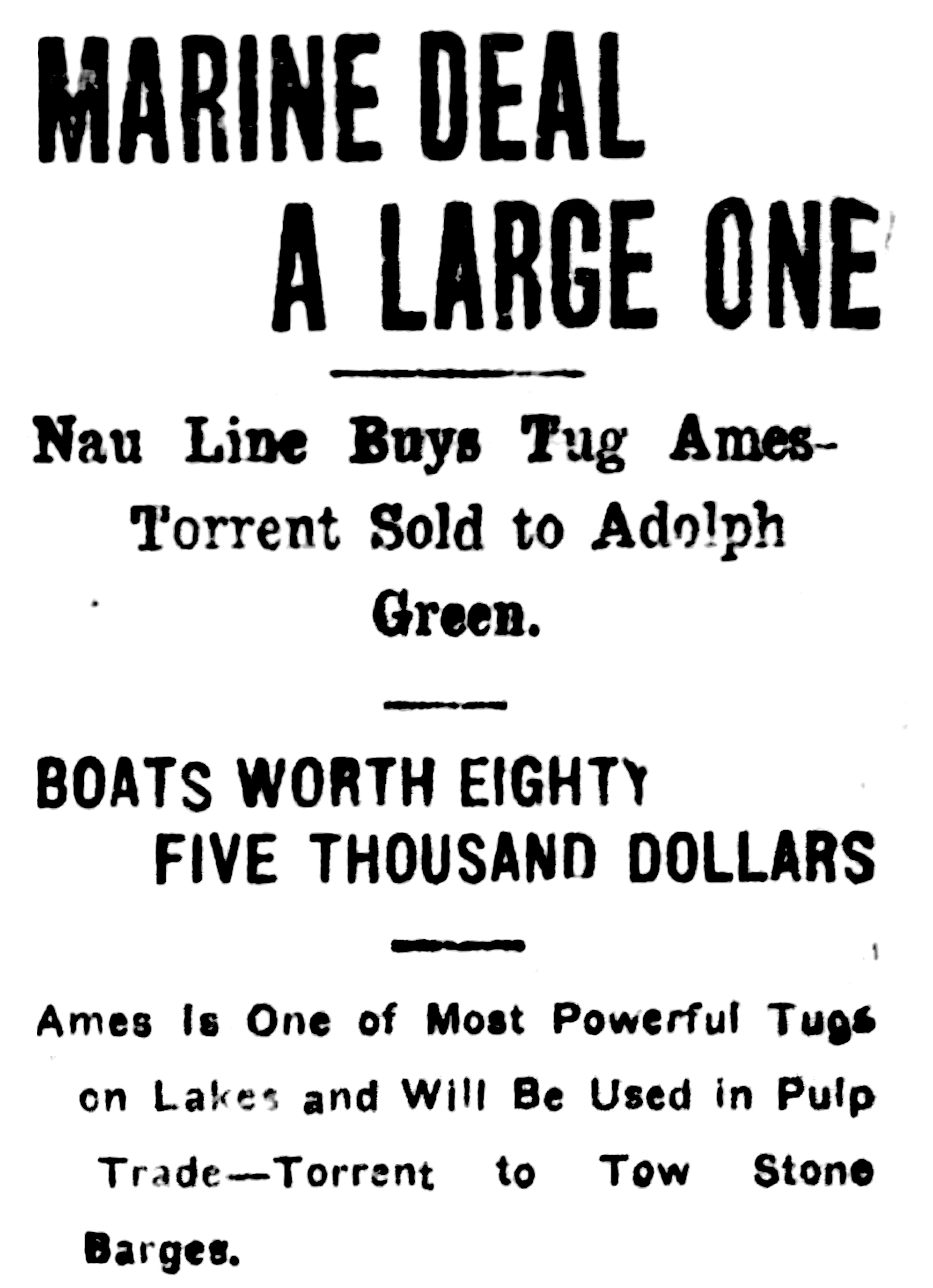 Negotiations were closed today in a transaction whereby the Nau Tug Line becomes the owner of the steel tug J. C. Ames, operated by the Lake Michigan Car Ferry Transportation company. The tug cost. $50,000 when built and is one of the most powerful in the lake service.

The Nau Line at the same time disposed of its tug Torrent to Adolph Green, the contractor. The Torrent was built at a cost of $35,000. Mr. Green will use the Torrent to tow barges in the stone trade. Both tugs will be turned over to the new owners at the opening of navigation in the spring.

The tug Ames is 189 feet long with a 28 foot beam. She is equipped with a fore and aft compound engine, 21×14×40 feet, and two marine boilers, 9×14 feet. The tug will carry 400 tons of coal. The Nan people will use the tug in the pulp wood service from
Sault St. Marie. In order to secure an idea of the length of the Ames, a comparison with the Fannie C. Hart of the Green Bay Transportation company which is 145 feet long, may be made. The Ames is equipped with electric lights throughout and carries a searchlight.

The prices paid in each of the sales are private 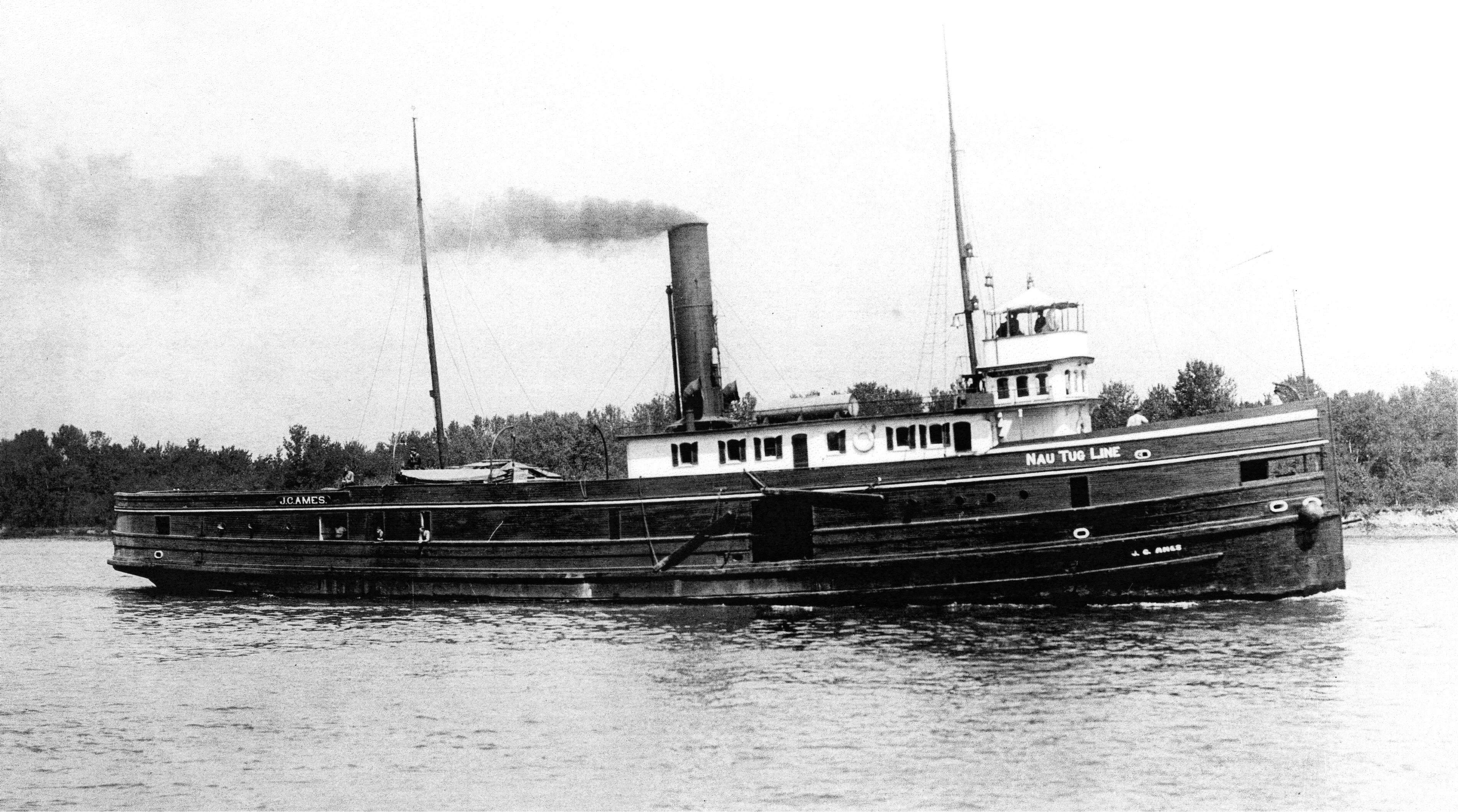 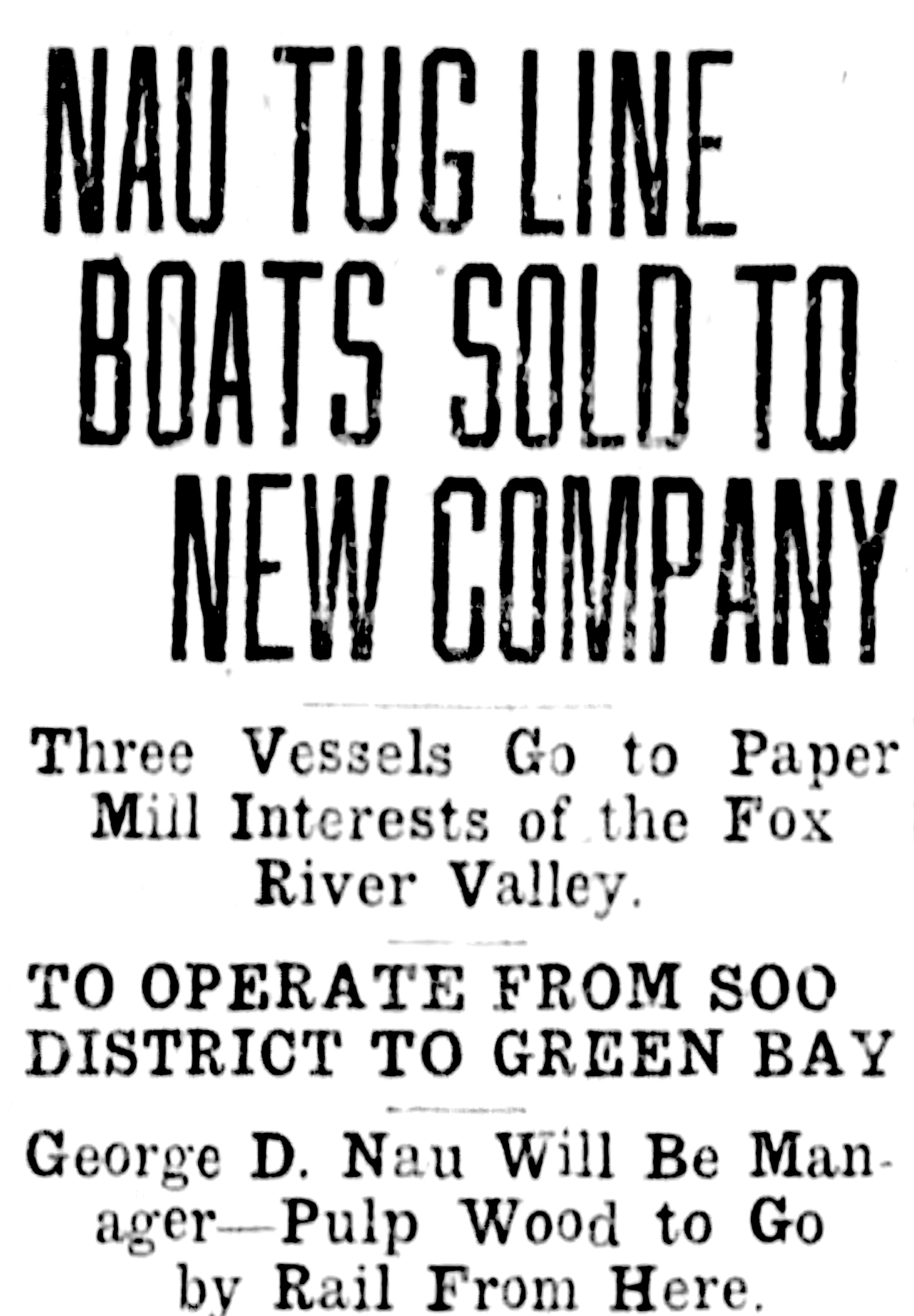 Sale of its fleet of three tugs, J. C Ames, L. T. Brogan and Erna (US No. 136427), to S. W Murphy, Appleton, was announced today by the Nau Tug line, Green Bay, through George D. Nau, chief owner and head of the business. The boats represent a big, investment, but the purchase price is not made known.

Paper mill interests in the Fox river valley are buyers of the boats. Identity of all purchasers is not disclosed. It is known that W. S. Taylor, of the Pulp Wood Supply company, will be manager of the boat business, in another year. Mr. Nau has been engaged to act as manager this season. A corporation will be organized by the Appleton men to operate the boats, chiefly in the towing of pulpwood from the Sault Ste, Marie district to Green Bay, to be conveyed by cars to the valley paper mills.

The Appleton men also bought 1,200 booms and a steel elevator for handling pulpwood from the Nau line.

Ames Powerful Tug.
The Ames is one of the largest and most powerful towing boats on the Great Lakes. She will be used for out side towing, and the Erna will be used to help make up rafts. The Brogan will be used as a harbor boat, stationed in this port.

Nau to Retire.
In selling these boats, George D. Nau announces he will retire from the towing business in another season. For twenty-five years he has owned and operated boats on the lakes land Green bay. He is president of the Green Bay Paper and Fibre company, and interested in the Northern Paper Mills, and other business concerns in Green Bay

Dismantled in Manitowoc, Wisconsin and her final enrollment was surrendered at Milwaukee in 1923. 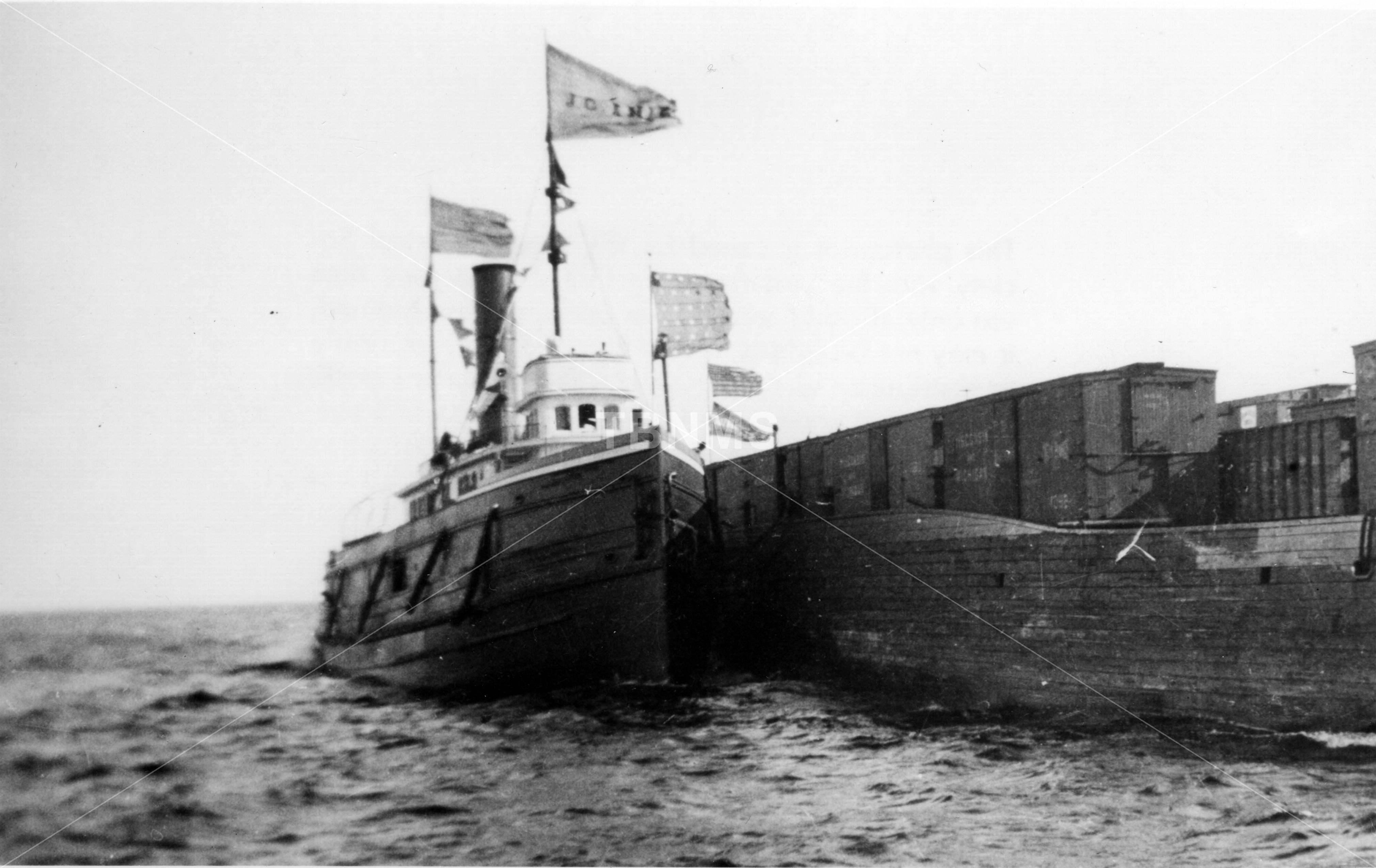