The largest permit of the week was for a $150,000 building for office and factory purposes, for the Chicago Edison Company, at 139-41 Adams street, adjoining the Home Insurance Building, the structure is to be ten stories high. 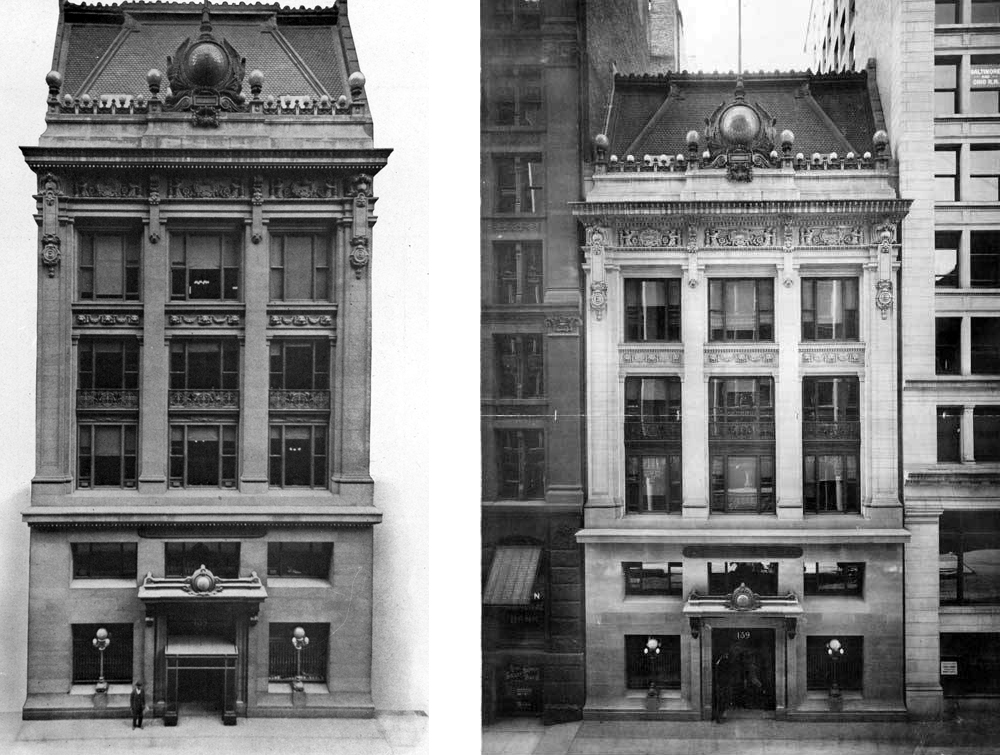 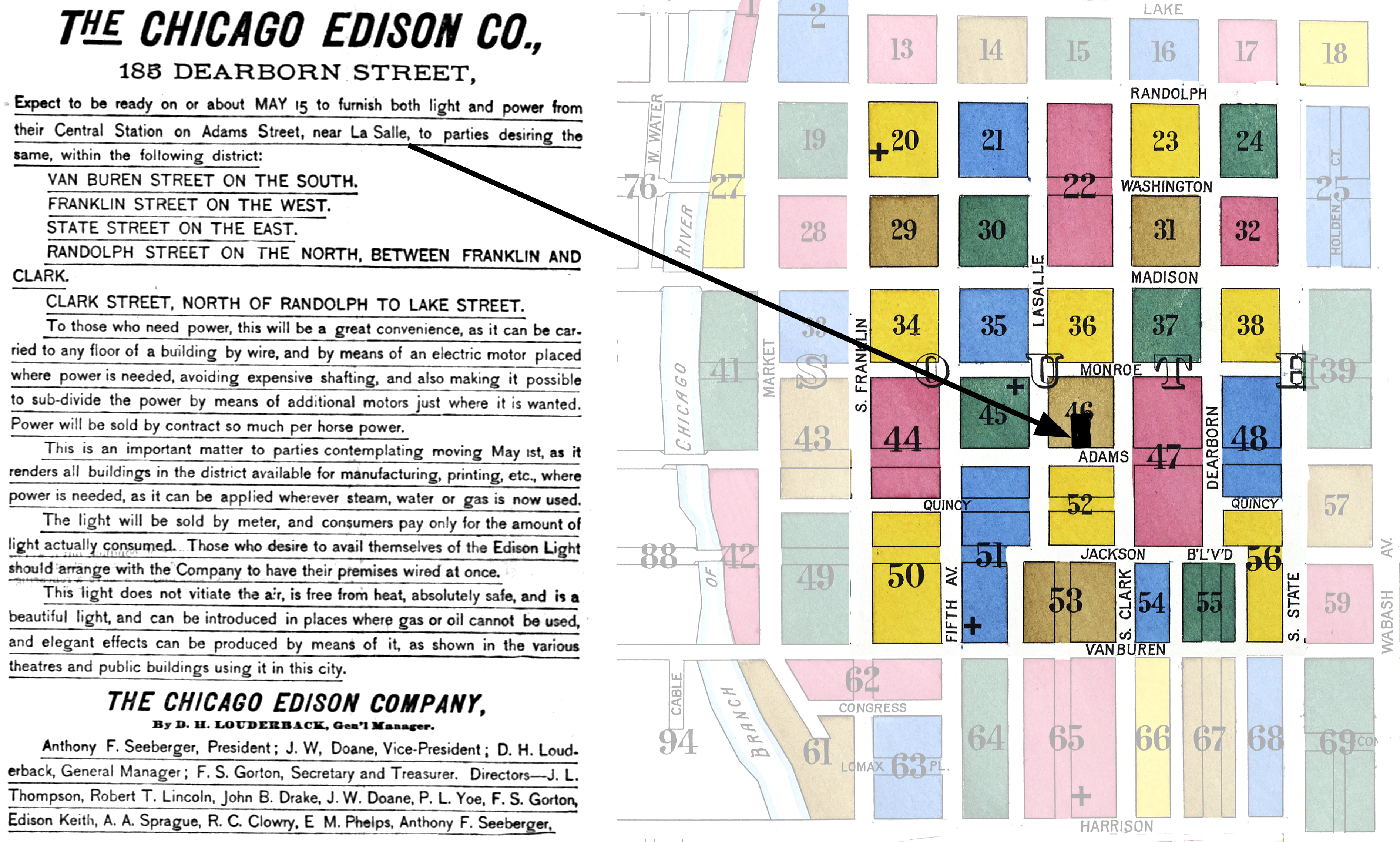 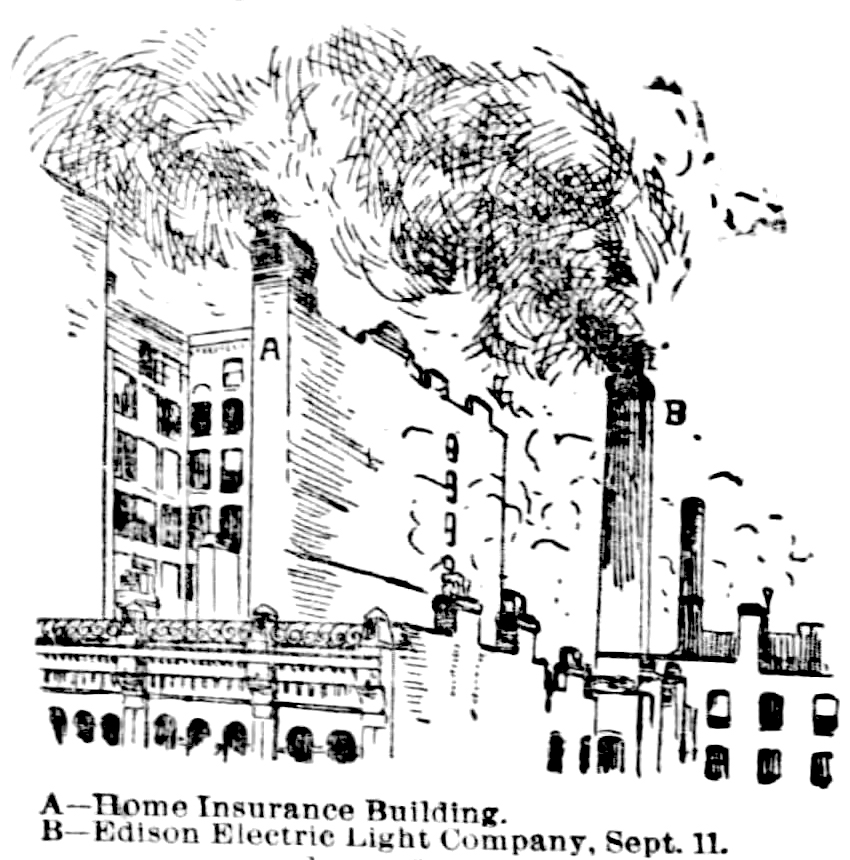 THEIR SMOKEY CHIMNEYS.
Caught in the Act by “The Tribune” Photographer.
Mr. E. C. Waller refused to believe that his chimney was guilty of the indicated in the cut. “The Home Insurance Building has the model boiler plant in the city,” said he. “You can look at our chimney and be convinced. The only time smoke is created is in the early morning. I am heartily glad that The Tribune is making this agitation. Good results have already been attained and I hope more will follow.”

In justice to Mr. Waller it should be stated that his great chimney begaved perfectly yesterday afternoon. The reporter took several observations and saw no signs of smoke. The same cannot be said of the stacked marked B in the same cut. This is the property of the Edison Electric Light Company. In company with Superintendent Sargeant the reporter made a critical investigation of the splendid power plant located in this building. The fault was traced to the most common source, viz: unskilled or negligent stoking. The Edison company spared no expense in constructing their boiler plant. The four immense boilers have a steam capacity of 3,000 horse power, and are surrounded with what is known as the “Jarvis setting.” Each furnace has four doors. The firemen are instructed to feed coal into the furnace at short intervals, opening each door in regular succession. By this system, three compartments are always at a white heat, and the smoke arising from the green coal is easily and perfectly consumed. Careless and disobedient firemen will neglect these instructions, and had doubtless done so when the above photograph was taken. Under the personal supervision of Superintendent Sargeant perfect combustion was obtained, and the cloud of smoke ceased as by magic. The test was a convincing proof of the fact which The Tribune has maintained from the first, viz: that the most perfect smoke consuming device can be rendered inoperative by unskilled or careless stoking.

The people who control the furnaces in the Edison Building in this city ought to burn hard coal till such time as they will put in the down-draft appliance. They have been allowed to commit shocking smoke nuisance too long already, and should not be permitted to keep it another day on any plea whatever. If such a condition were imposed and enforced the offenders in the Edison Building would be much more likely to be quick about getting in the down-draft furnaces than otherwise. They seem to be in no more hurry about adopting the reform than the tug-owners were all through the summer. They have been the most effusive of smoke emitters, and set as if they do not care how long they continue to be so, or how much annoyance they cause to the people. The Society for the Prevention of Smoke has been too lenient with them. It ought to have pressed them more vigorously. If it had done its duty in this glasing case of neglect, as it has in some others, there would now be less smoke to complain of, and some other offenders would not have the excuse that they were being hardly dealt with while worse violations of the ordinance were being handled with kid gloves. The Edison folks should at once be required to burn anthracite coaltill they are able to use the soft kind without committing a foul nuisance during the whole time their furnaces are at work.

The Edison Company’s Power House
At 139-141 Adams Street, although a small building, contains 16 engines, 32 dynamos, and furnishes power for 100,000 electric lights. Its chimneys have added a chief difficulty to the Chicago smoke problem. Dimensions: Width on Adams, 50 feet; depth, 200 feet; height, 40 feet. The general offices of the Chicago Edison Company are here. Erected in 1887. 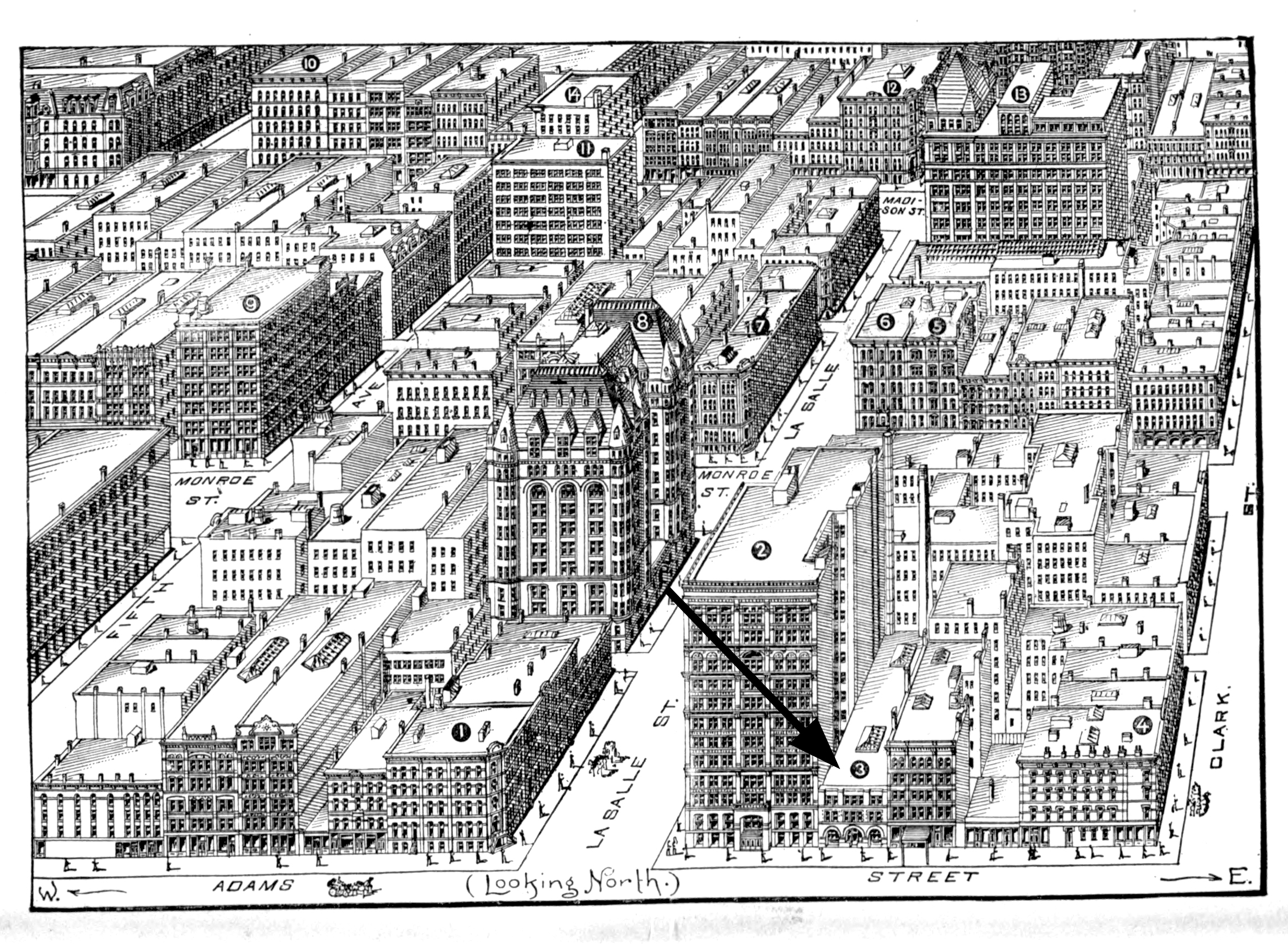 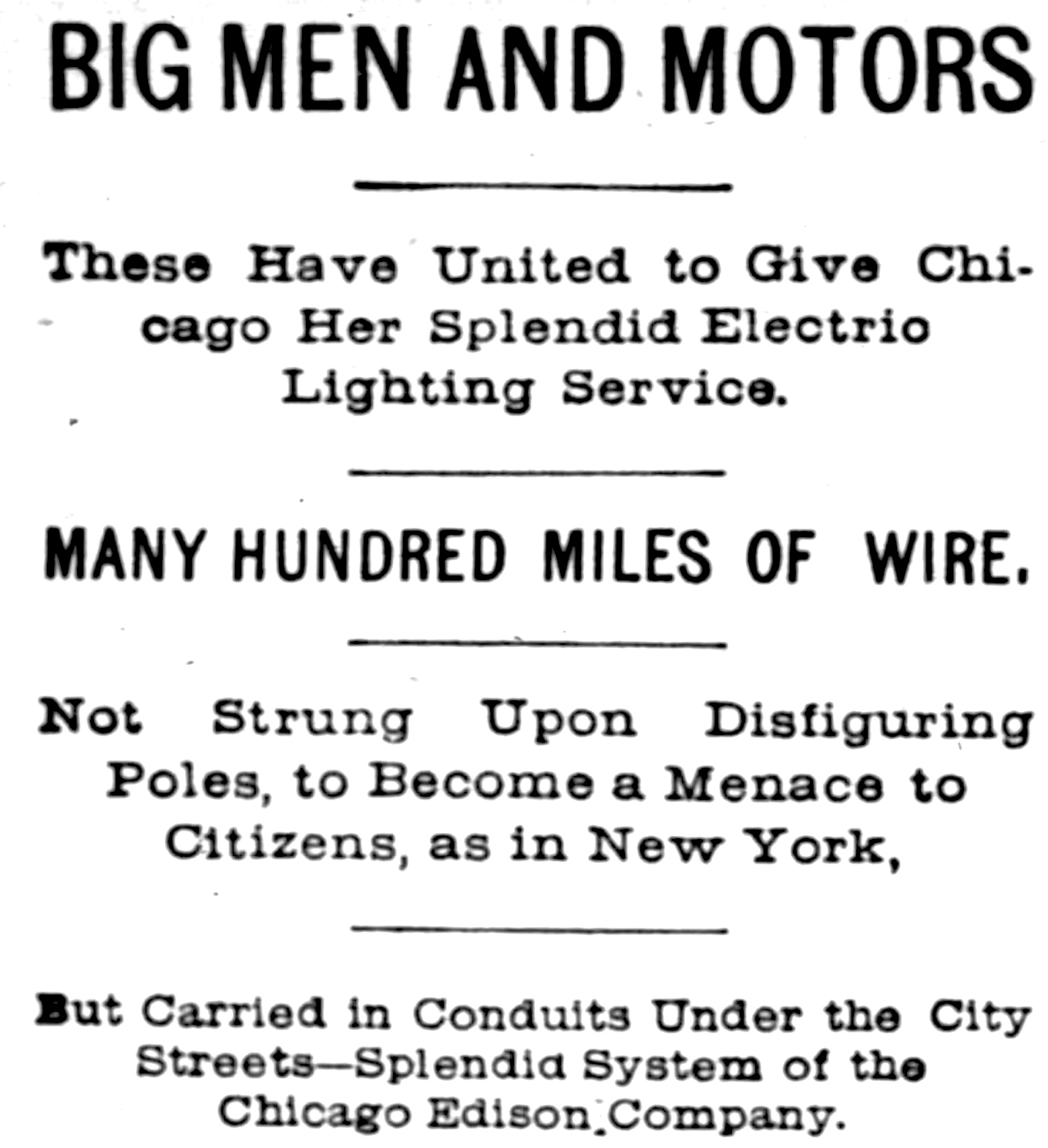 It was not until 1887 that Chicago, with all her push and enterprise, could boast of an electric lighting system worthy of the name. It was in the above year that the Chicago Edison company was organized. The concern, while not controlled by any Eastern company, nevertheless operates under an Edison franchise which allows exclusive use for Cook county of all the Edison inventions in use or to be patented for a term of years. The then new organization, so far as those interested were concerned, was distinctively a Chicago enterprise, and there has during the last five years been little change in its management. The present board of directors shows a list of names which could hardly be matched for business solidity and commercial integrity. It comprises A. F. Seeberger, Lambert Tree, E. L. Brewster, R. C. Clowry, Byron L. Smith, L. Smith, Robert T. Linecin, J. W. Doan, A. A. Sprague, K. M. Phelps, Edison Keith, F. S. Gordon, and Samuel Insull, the latter gentleman being the president of the company and Mr. Gordon being secretary and treasurer. The Chicago Edison company was capitalized at $3,000,000, and but a very small portion of the stock is owned outside of this city. Its object was to conduct a general business in furnishing electric light from its own stations, and also in the installation of special plants in public buildings, theaters, and factories. Its career, under a liberal and progressive management, has been continuously successful, until it now has in daily operation throughout the city more arc and incandescent lamps than any city in the country. They also furnish current for over 1,000 motors, aggregating about 4,000 horse power, and employ the services of upward 700 men throughout the year. Unlike many other cities, the wires of the Chicago Edison company are safely buried in pipes over two hundred and fifty miles of which run beneath the city’s streets, necessitating between 12,000 and 15,000 horse power to operate same. 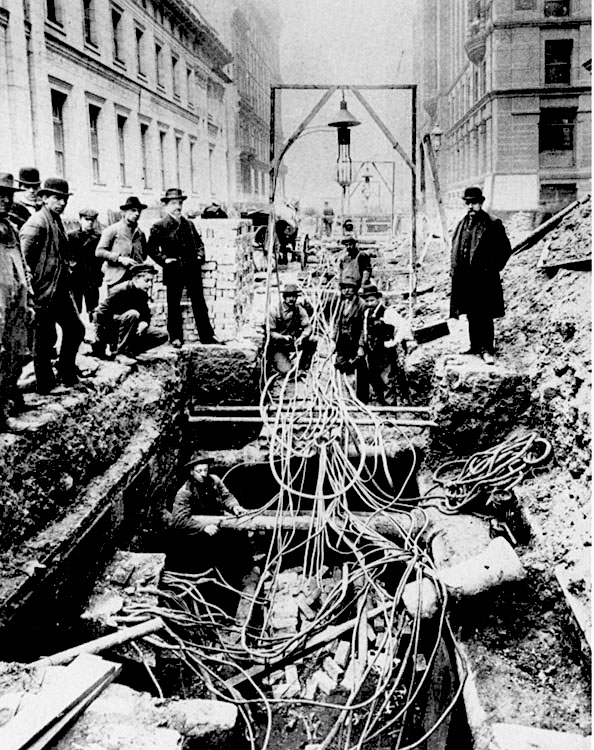 The company’s plants, or stations, are six in number. The first is located at No. 139 Adams street, the second at Market and Washington streets, in the improved quarters of the old Chicago Arc Light and Power company; the third at No. 2000 Wabash avenue, the fourth (now building) at Harrison street and the river, the fifth at Forty-seventh street and Stewart avenue, and the sixth on North Clark street near Oak. This last station, which is a model in every way, has just been started and furnishes light to that important residence of the North Division extending from La Salle avenue and from North avenue to the river. This plant adjoins the Newberry library, is absolutely fire-proof, and contains every modern improvement and device, among which are direct connected compound engines and dynamos, the fuel for which is natural gas.

It naturally follows that the primary and present advantages of the company in having exclusive right to use the Edison patents, coupled with the complete, comprehensive, and extended system above briefly mentioned, all controlled and guided by wealthy, sagacious, influential, and enterprising men, have united to make the Chicago Edison company about the only factor in the big problem of lighting this big city by electricity. They either furnish lights direct or have installed plants in nearly every public edifice, business block, and theater in town, among which may be mentioned the City Hall, the Auditorium, Masonic Temple, the Monadnock block and Venetian building, the Grand Pacific and Great Northern hotels, McVicker’s, Hooley’s and the Columbia theaters, the Chicago and Grand opera-houses, and nearly every other place of amusement. Edison was the pioneer in the difficult task of properly lighting theaters. He devoted years of study and experiment to the subject, and now no temple of the drama is considered complete which is not equipped, both in front and behind the curtain, with his superior system as installed by the Chicago Edison company. 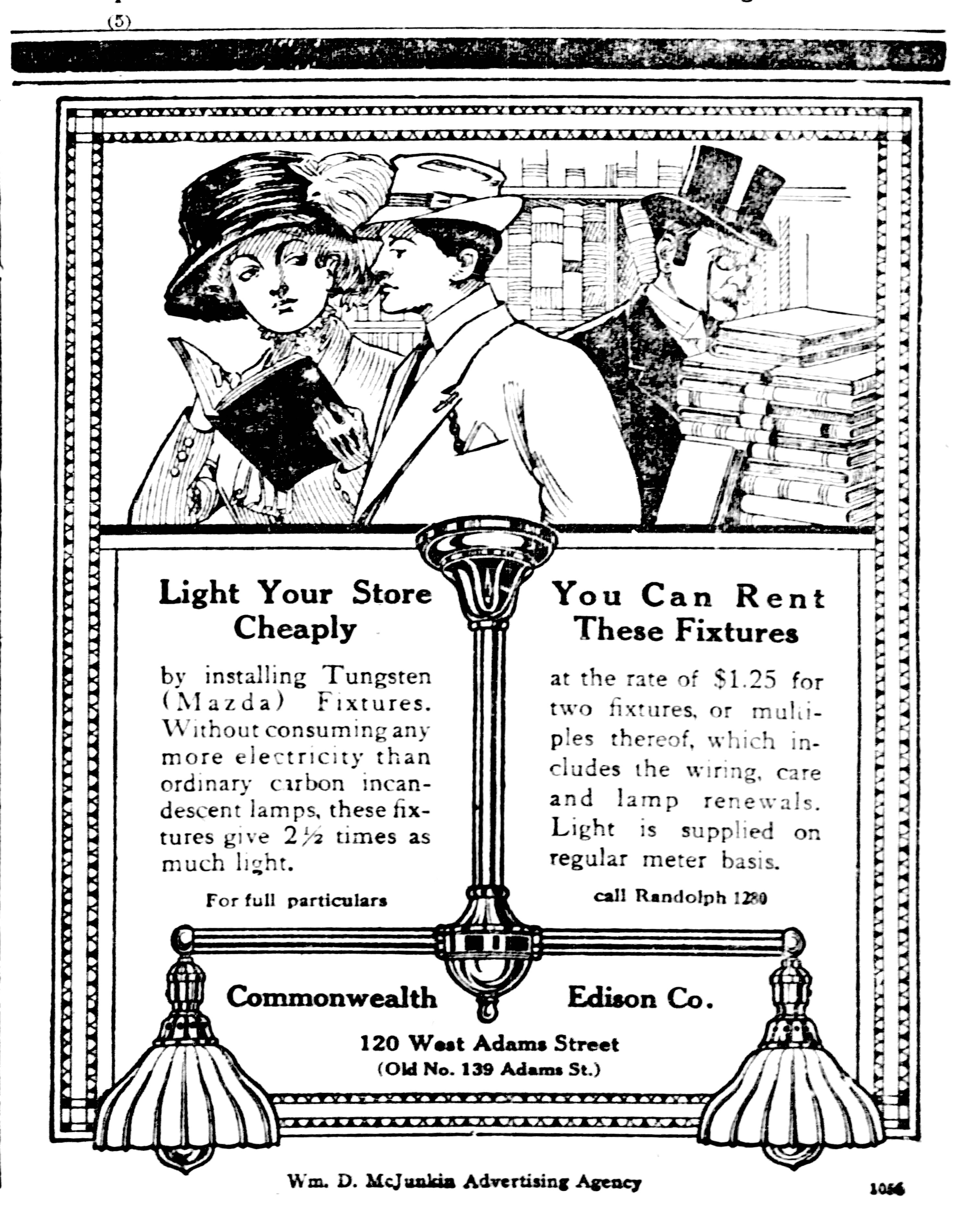 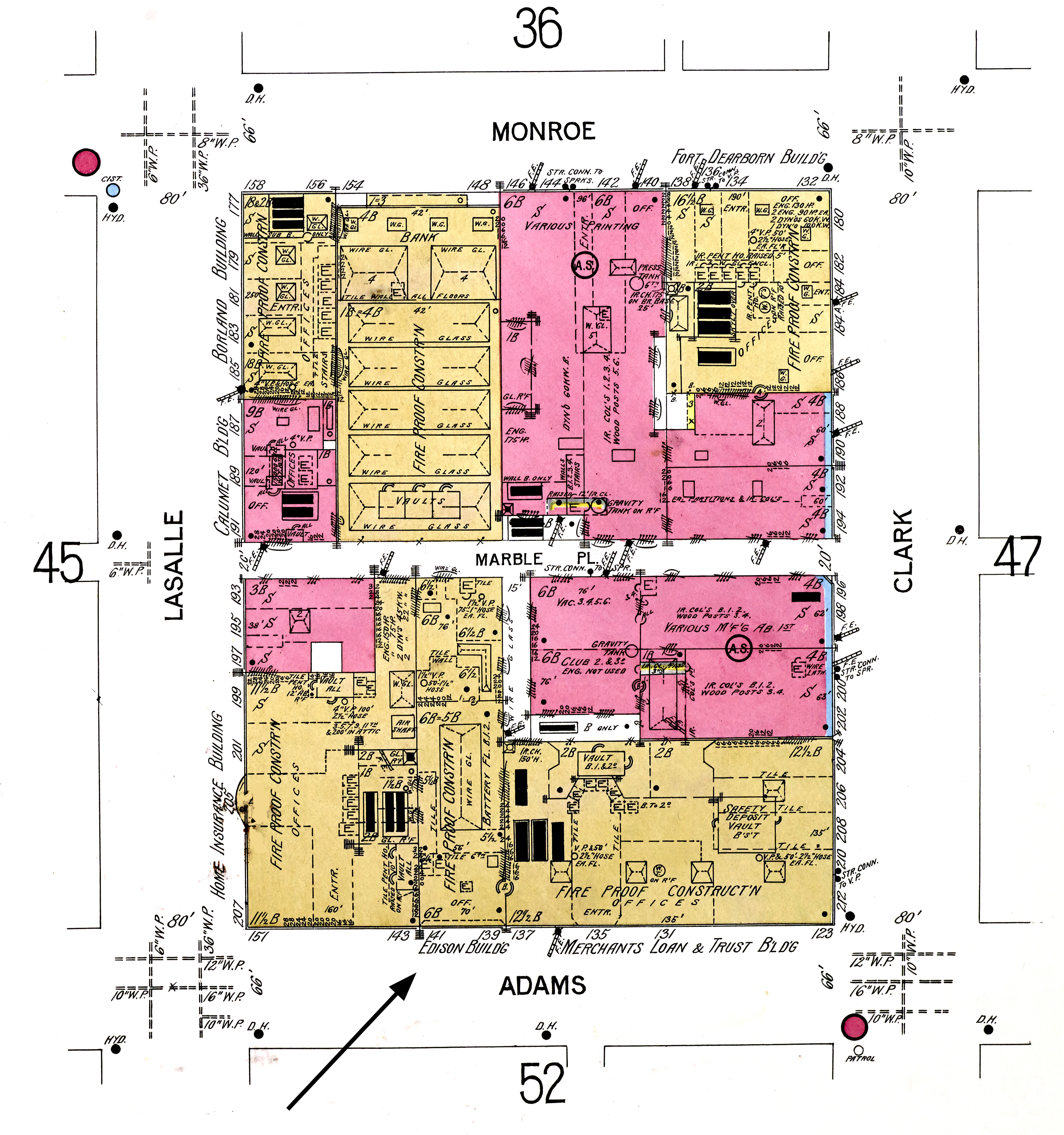 It was wrecked in 1931 along with the Home Insurance Building to make way for the Field Building.