W. L. B. Jenney took out a permit yesterday to put up an eight-story and basement office structure, at the northeast corner of Adams and La Salle streets, to cost $300,000 for the Home Insurance Company of New York. “The building,” said Mr. Jenney, “will be strictly fire-proof and first-class in every respect. It is too early to give a description of the plans, for many important points have hot yet been decided upon. The license was taken out rather prematurely because an ordinance is pending in the Council forbidding the erection od buildings more than 100 feet in height. Those who have considered this subject think that the ordinance should make it illegal to erect non-fire-proof buildings of more than sixty feet in height. Why the height of fire-proof buildings, however, should be interfered with is not evident.”

On May 1, 1884, construction crews started work on a 10-story office building at the corner of La Salle and Adan Streets in Chicago. The Home Insurance Building was the first structure to be called a skyscraper. 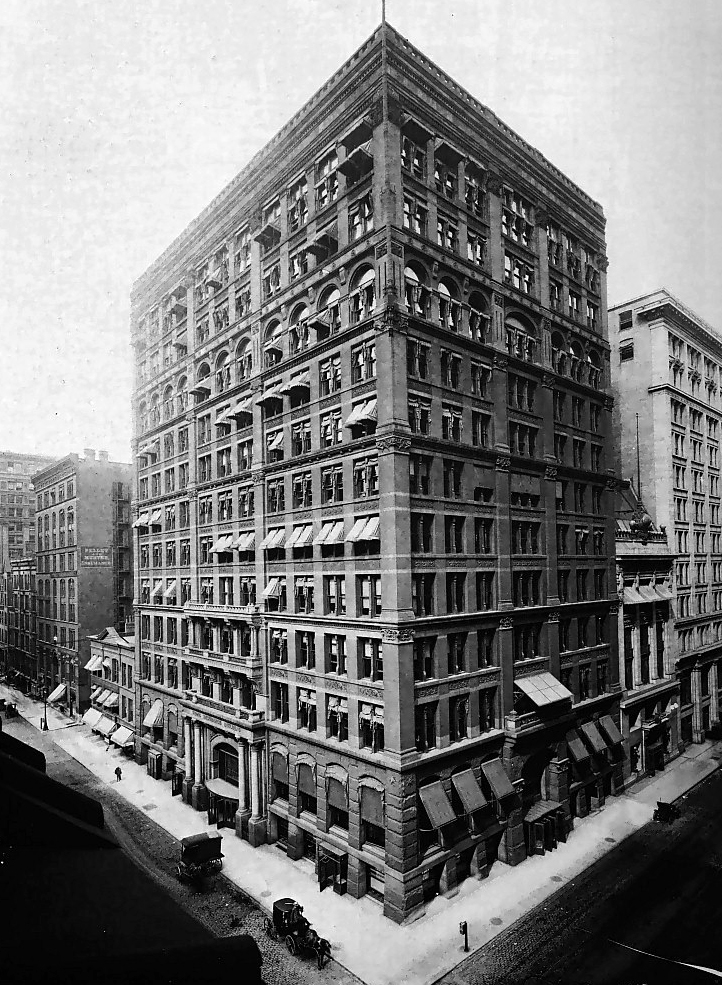 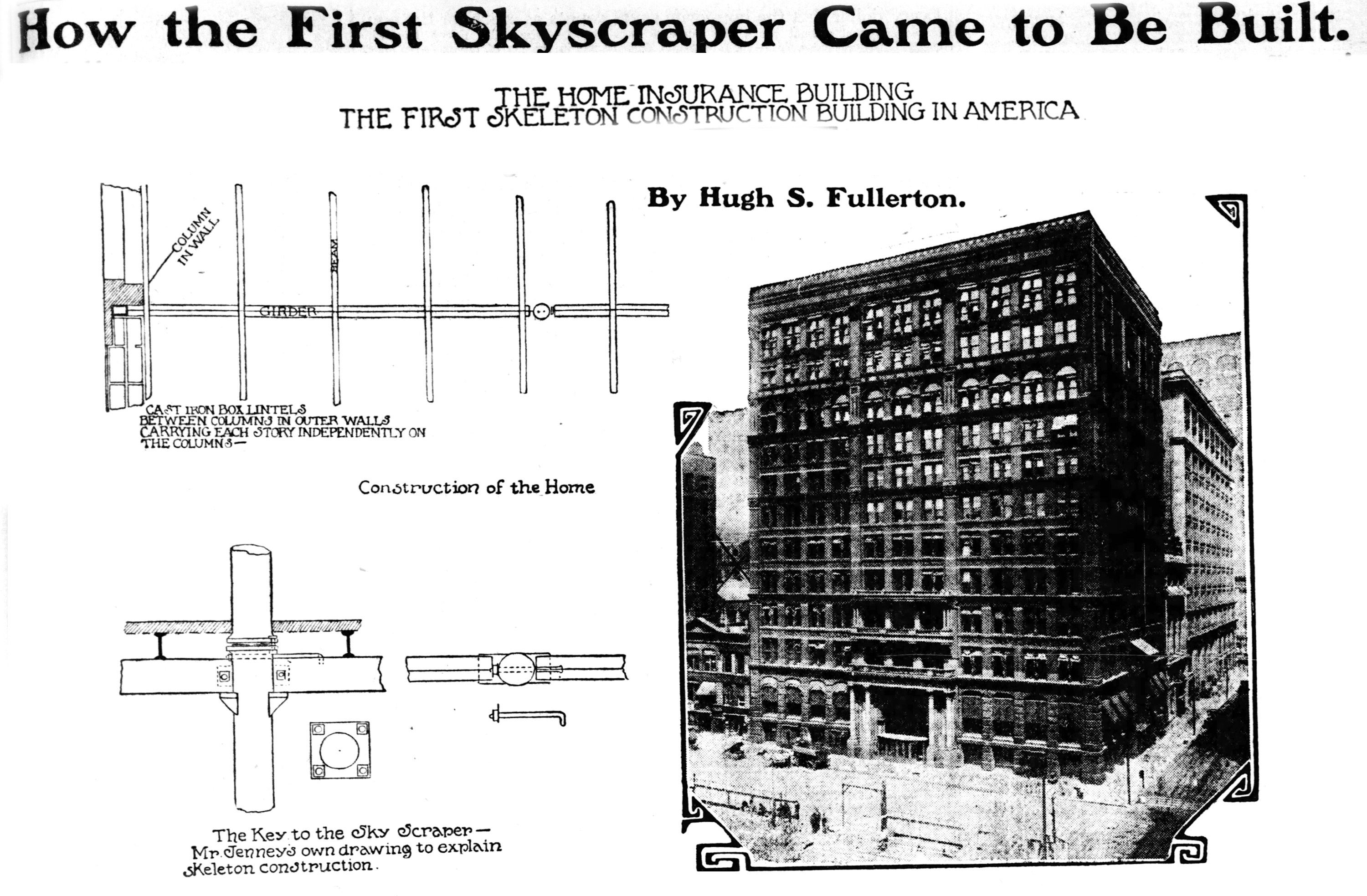 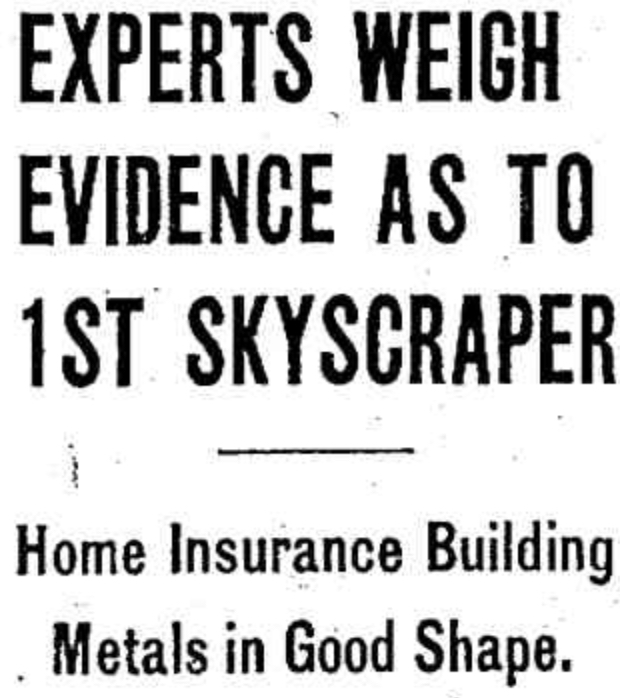 While architects, engineers, building experts and material men pick away at its sturdy old frame, examine every nook and cranny, take notes and collect bits of its body, what is possibly one of the most significant buildings In the world is fast disappearing from the sight of man. This is the famous old Home Insurance building at the northeast corner of Adams and La Salle streets, which wreckers are now engaged in reducing to a memory. It is to be replaced by the 42 story Field building.

The host of architects and others who are studying this building as it melts away under the picks of the wreckers are seeking to determine once and for all its claim to fame as the first structure of skyscraper construction- ever to be erected In the world. The popular definition of a skyscraper is said to be a building of skeleton framework, with the outer walls hung onto and carried by the framework instead of supporting themselves as under construction methods carried on down through the ages.

It was the introduction of the skeleton framework type of construction that made possible the cloud piercing giants of American cities.

A Long Controversy.
For a number of years a controversy has taken place as to whether the Home Insurance building or the Tacoma building was the first building of skyscraper type. The Home Insurance building, which was designed by William Le Baron Jenney, was completed In the fall of 1885, a few years prior to the Tacoma building. When the latter structure was torn down a few years back, the controversy flared up and has been going on ever since.

A committee was appointed some time ago to make a thorough study of the Home Insurance building and its findings will not be made known until the last brick has been carried away. However, some authorities assert that the results to date indicate that the Home Insurance claims to be the first skyscraper very likely will be substantiated.

For Instance, it has been stated that the masonry of an intermediary story could be removed without the masonry of the floors above falling out, giving indication of skyscraper wall construction. Masonry is carried on lintel beams which are supported by mullion columns, which are in turn supported two or three floors apart by rolled shapes.

Examine Metal Work.
Committees are examining the metal used in the framework. Steel is. found in the upper three stories, which were added some time after the main building was completed. There Is some doubt as to whether the material used in the floors between the sixth and ninth is steel or wrought iron. Below the sixth floor heavy wrought iron beams are found. Samples of the various metal materials are in the hands of laboratories for analysis.

But one thing stands out, and that is the honesty of the American materials and workmanship that went into this pioneer structure. Henry Penn, Chicago representative of the American Institute of Steel Construction, asserts that he found no deterioration in the metal work he has examined. It has been reported that deterioration was found In metal exposed to the air In the elevator shaft.

A. J. Clonick, president of A. Levine & Co., stated that all the several thousand tons of metal brought to his company’s yards is in first class condition as far an he can find. “So far as the metal work Is concerned the Home Insurance building could have remained standing until doomsday.” Mr. Clonick said.

Some of the beams have embossed on them the name Carnegie, Mr. Clonick said. The United States Steel corporation has taken one of the beams to Pittsburgh for its museum there.

In Rosenwald Museum.
A whole window bay taken from between the third and fourth floors Is to be installed In the architectural section of the Rosenwald Museuni of Science and Industry. The architec- tural section of tlie museum will dem- the art of building from the (lawn of civilization to the present time and the Home Insurance bay, measuring 16xl6 feet, will be installed Jn the department showing the birth and growth of the skyscraper.

It will likely be some weeks before the various committees studying the construction make their final reports. The main committee, which will decide the skyscraper construction claim, consists of the following: 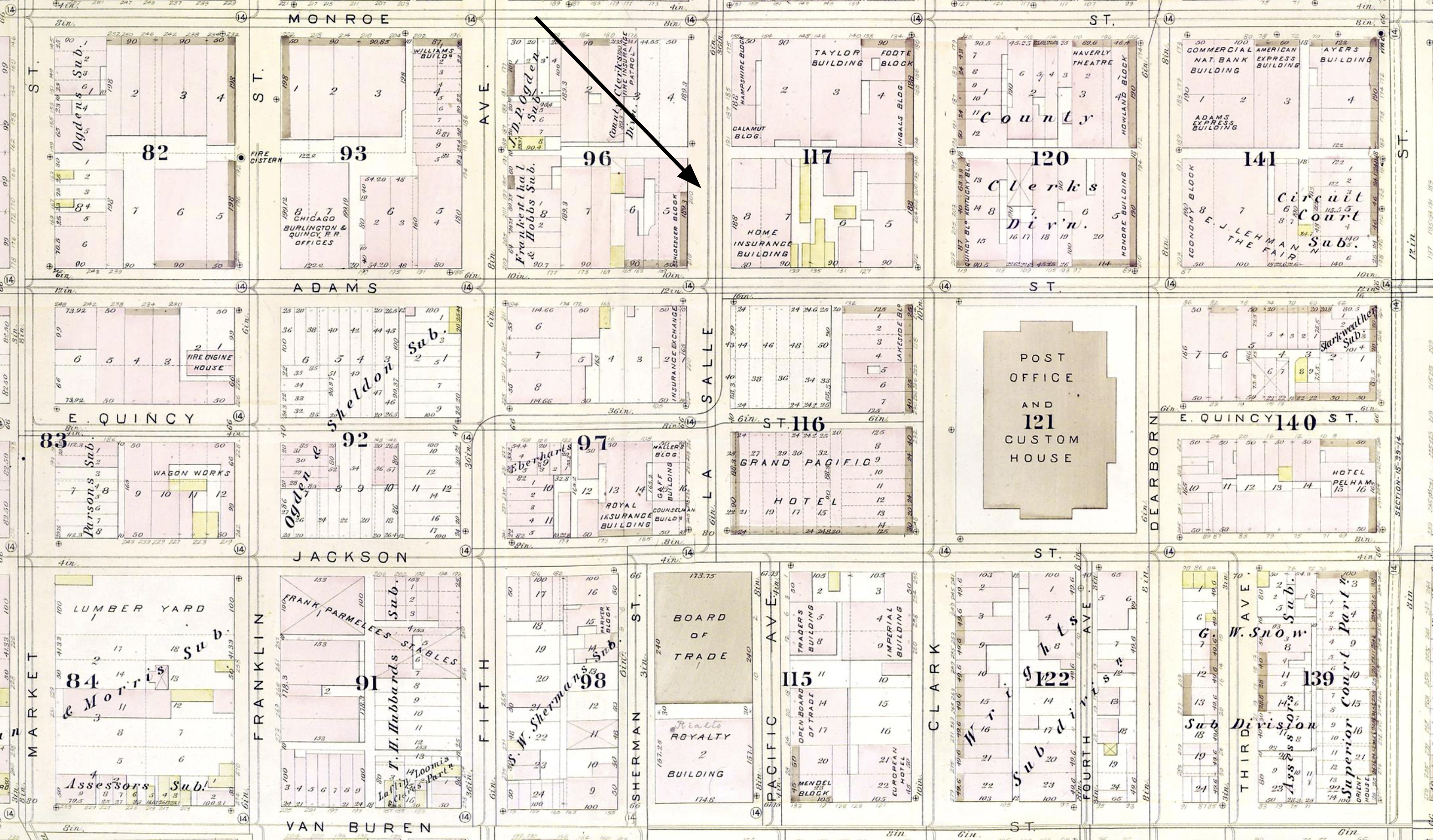 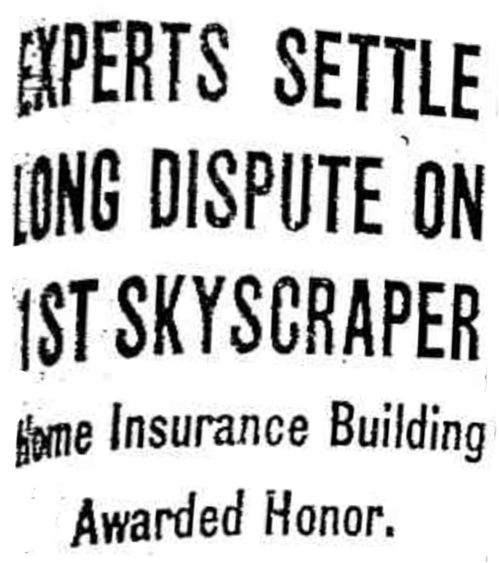 Chicago is the home of the world’s first skyscraper, and the Home Insurance building, recently demolished to make way for the huge forty-three story Field Building, has been awarded the honor of being the first structure ever to use the skeleton type of construction.

A controversy was definitely ended yesterday by Thomas E. Tallmadge, chairman of a committee appointed by the Marshall Field estate to decide which was the actual “first skyscraper,” the Tacoma building, completed in 1888, or the Home Insurance building, finished three years earlier, in 1885. He returned a verdict in favor of the latter.

First Skeleton Construction.
“We have no hesitation in stating that the Home Insurance building was the first high structure to utilize as its basic principle of its design the method known as skeleton construction,” the Talmadge report says, “and that there is much evidence that William Le Baron Jenney, the architect, in solving the particular problems of height and loads appearing in this building, discovered the true application of skeleton construction in the building of high structures and invented and here utilized for the first time its special forms.

“We are also of the opinion that owing to its priority and its immediate success and renown the Home Insurance building was in fact the primal influence of skeleton construction, the true father of the modern skyscraper.”

Findings Are Summarized.
The committee’s report summarizes its findings as follows:

It must be kept in mind that this building was constructed during a transitional period and represented a real pioneering in the adaptation of metal framing to tall structures.

There was a complete skeleton framework, floor loads were carried by both interior and exterior columns, wall loads were transferred to columns and columns were supported on independent footings.

The fact that some of these elements existed in a rather primitive state, and the framework did not conform to our modern ideals of rigidity, should not be allowed to effect our judgement of a courageous and credible undertaking. We fare, therefore, in complete accord in recognizing the Home Insurance building as the first tall structure of metal skeleton construction.

The committee which made this decision was composed of: 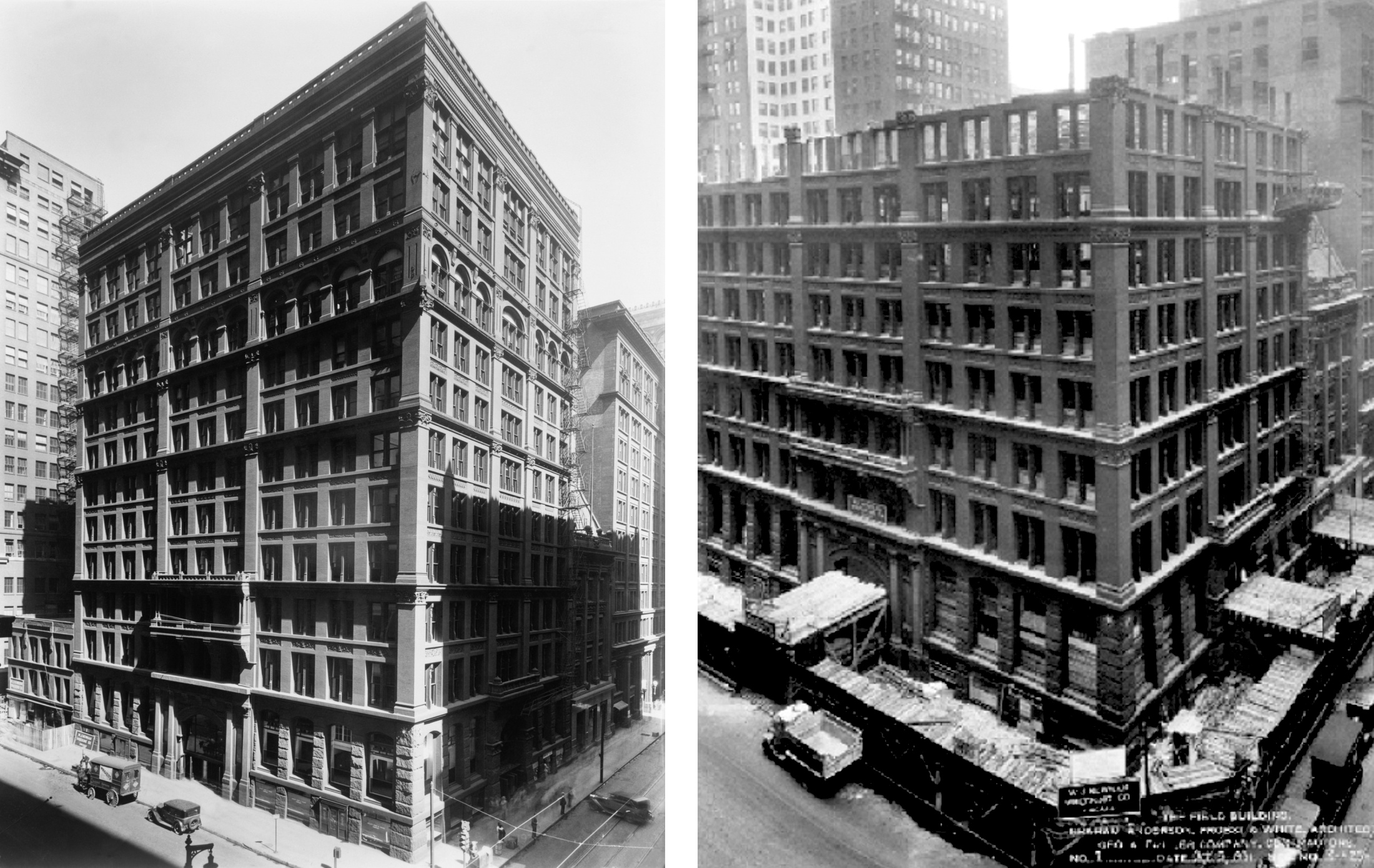 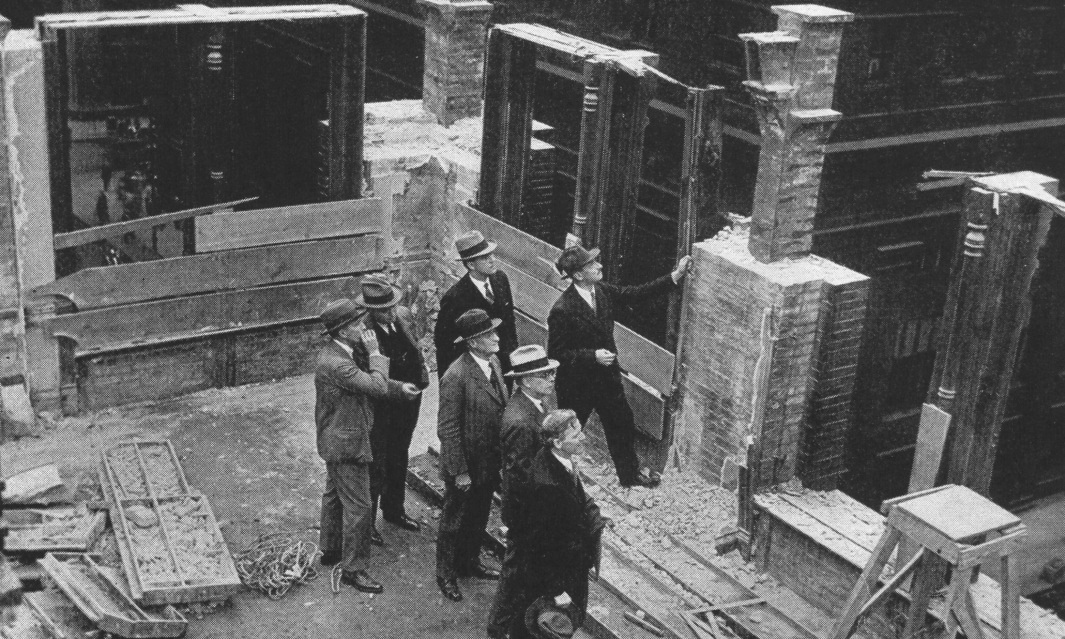 American architect Andrew Nicholas Rebori and colleagues examine the structure of the Home Insurance Building on its demolition in 1931.