Peter and Shepard Brooks were developers of a few significant buildings in Chicago. They were;

Second article in a series

Most of Chicago’s tall buildings carry their weight on steel skeletons. A few rest on solid mason=ry walls. The Monadnock Block, 53 W. Jackson blvd., does both, with a gracefulness that belies its 65 years and still inspires architects thru-out the world.

The Monadnock—actually four buildings in a flush row with connecting corridors—occupies the slender block bounded by Jackson, Van Buren, Dearborn, and Federal streets. It was built in two stages—the two units on the north half of the site in 1891 and the other two in 1893. All four—the Monadnock, Kearsarge, Katahdin, and Wachusett—were named after New England mountains.

Each was equipped with its own heating plant, elevator bank, stairs, and plumbing to make it more salable should that contingency arise. But the Boston interests that started the project still retain most of the ownership and the buildings long since have merged into one operation under the management of Aldis & Co., the original agent for the property, and under a single name, the Monadnock. 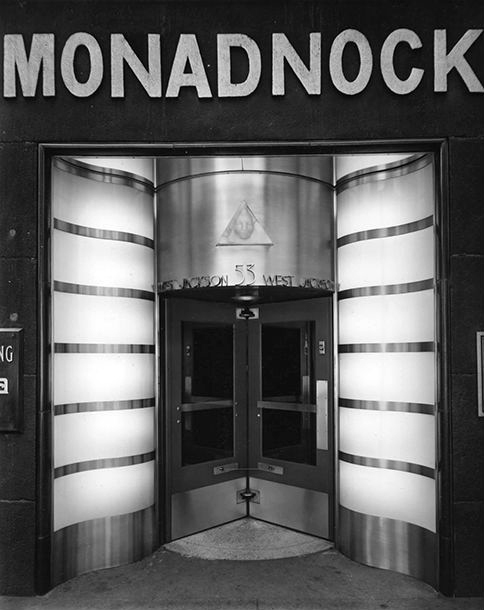 The building reflects the transition in architecture from load bearing wall to steel skeleton construction, the latter a Chicago development that gave the world the skyscraper. The first section of the Monadnock, designed by Burnham & Root has solid brick walls six feet thick at the base.

The walls rise to a height of 197 feet—the highest bearing walls ever built in a commercial structure. They taper as they go up, giving the exterior its pleasing, flowing exterior lines.

That was the era of much fussiness in architectural adornment. What might have emerged from the drawing boards was a mound of brick festooned with decorations. But what did come out was a simple straightforward building years ahead of itself in functional design.

The first section was built to a height of 16 full stories with a 17th floor “attic.” The second section, comprising the two buildings on the south half of the block, were designed by Holabird & Roche and went up 17 stories, Some vertical steel supports are used in the south half.

The “quadruplet” building was designed with its main entrance on Van Buren street and the back door on Jackson. With the construction of the “L” in Van Buren street, the building figuratively did an about face.

Things have a way of lasting at the Monadnock: The same ownership, the same management firm, now headed by Graham Aldis, and no less than four of the original tenants, all patent attorneys.

Fifteen others of the more than 300 tenants have been in the building for 35 years or more, according to Clive J. Taylor, building manager. The biggest space user is Statistical Tabulating Corporation with a floor and a half.

And look who has an offiuce in the solid masonry north half—the American Institute of Steel Construction. 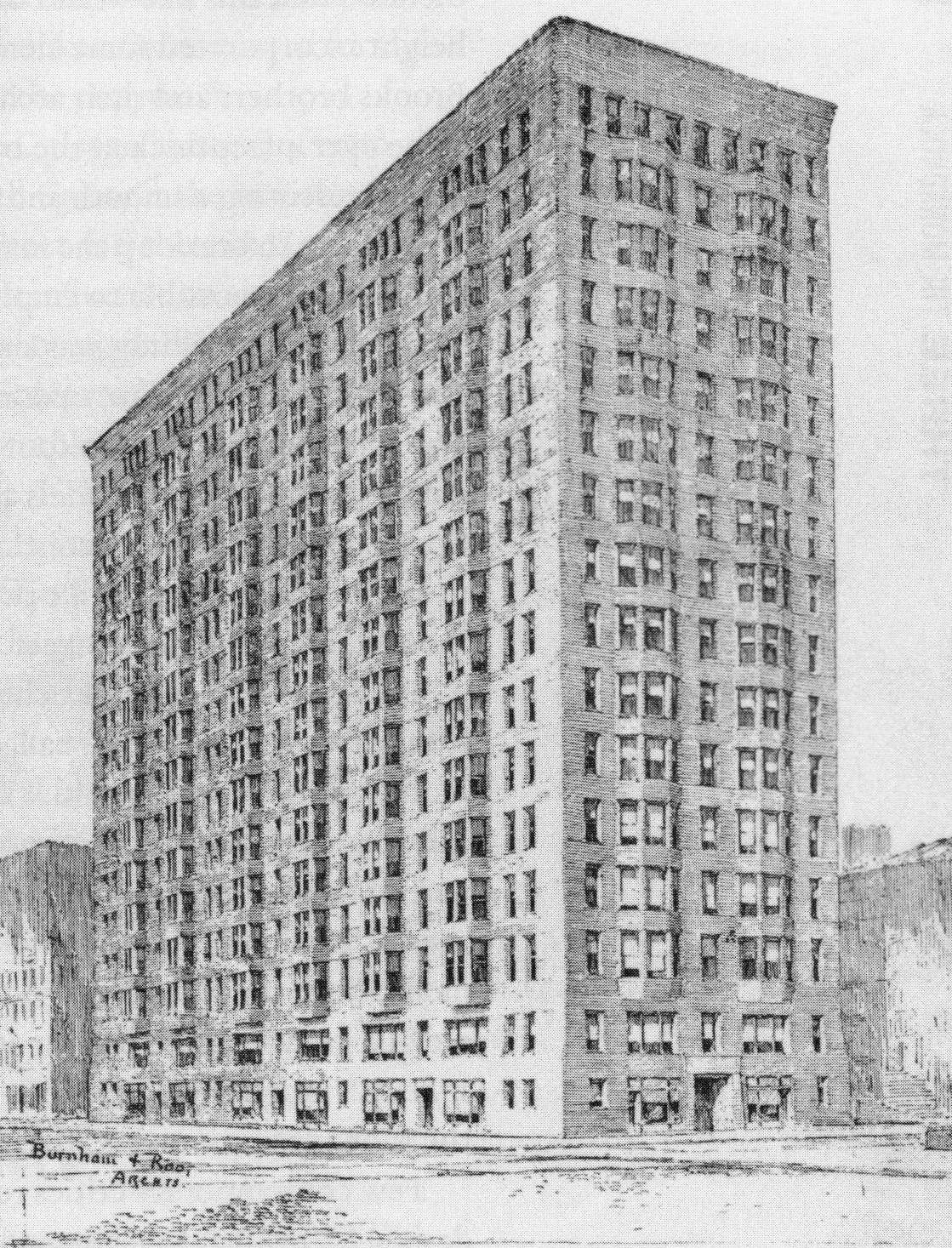 The Monadnock and Kearsarge Building
The Inland Architect
November, 1889 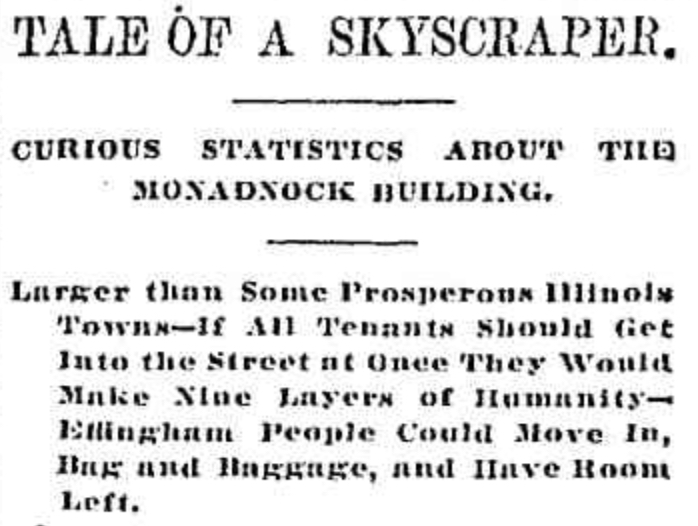 Occupants of the Monadnock Building must not all attempt to leave the building at one and the same time. A mathematician who had nothing else to do yesterday compiled some figures in regard to the big office structure which are rather startling.

He first figured on how the tenants of the building could be placed in the street outside. He then compared the number of occupants in the structure with the population of various Illinois cities.

That is more inhabitants than most Illinois towns have. Yet this is the number of persons who spend the greater parts of their lives in the sixteen floors of the Monadnock Block. They are so many if they all should attempt to get into the streets around the building at the same time they would have to stand on each other’s backs.

The first people to reach the streets would have a most interesting experience. On their heads would be a second layer of humanity. And the second layer would not have any great opportunity to smile at their brethren who stood on the ground. For on their own heads would be the heels of a third assortment of bankers, merchants, and clerks,.

This wouldn’t be bad if it stopped here, but out of the windows would come more of Monadnock’s people. They would take their places on the unhappy heads of the third layer, and everything would go well unless somebody dropped a typewriter machine or a couple of law books on the people standing under them. But still the crowd would pour out of the building until another restless layer of people had been formed. Faster and faster the dwellers in the big skyscraper would climb from the windows until each man on the bottom layer would be groaning under the weight of eight people.

Nine layers in all.

After he had succeeded in packing the Monadnock folks in the street outside the mathematician kindly refrained from scaling them up and turned his attention to moving the inhabitants of various towns and cities en masse into the Monadnock. 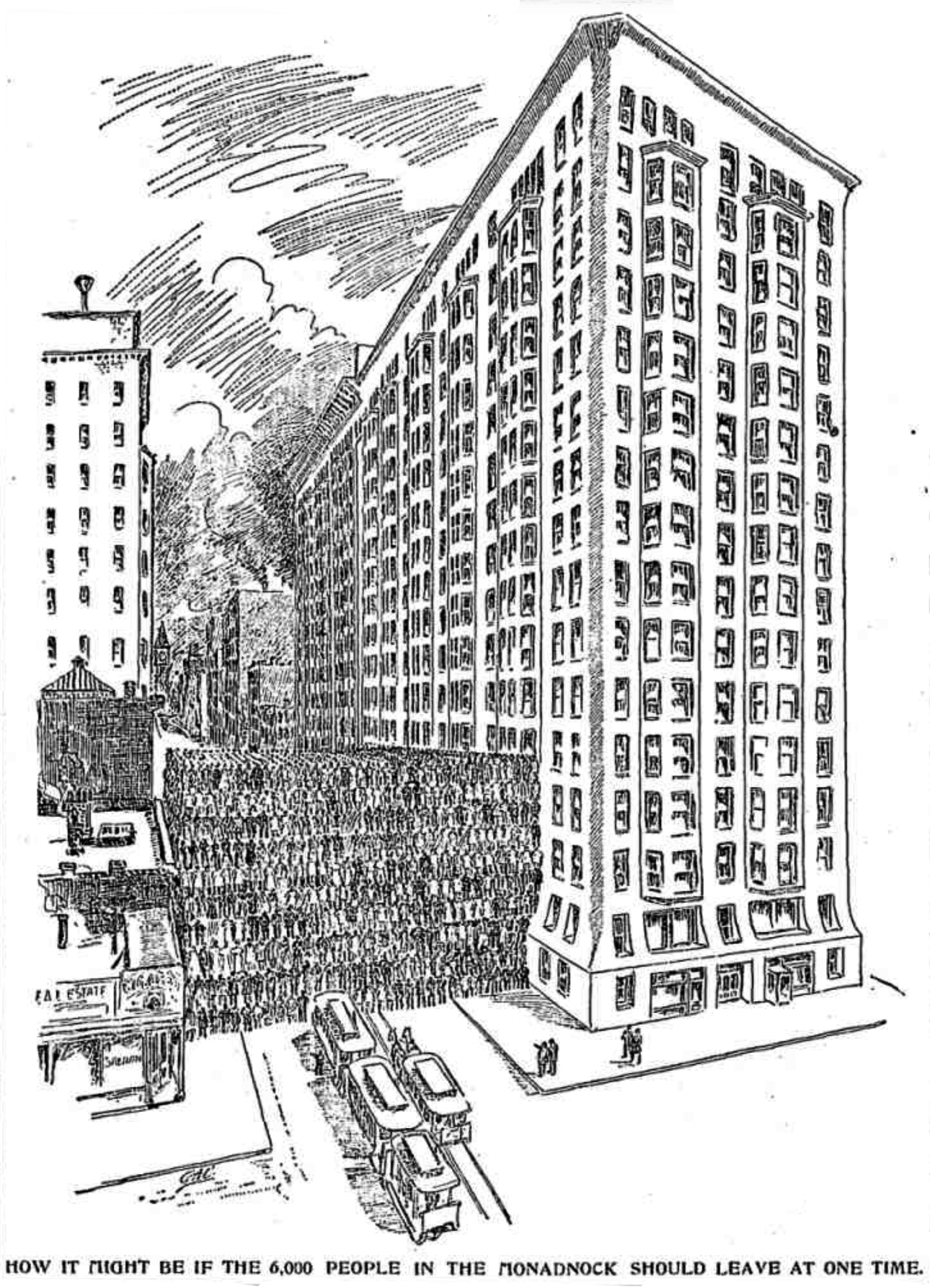 He found that every man, woman, and child in Effingham, one of the most prosperous cities in Southern Illinois, could move into the Monadnock building bag and baggage and retain their town charter.

All the inhabitants of Centralia could easily house themselves in the structure if the Effingham folks got tired.

If the Canton people wanted to come in a body to Chicago to live they would find plenty of room in the basement for the plows and cigars which they manufacture in such large quantities.

The Third, Fourth, and Fifth Wards of Bloomington could be nicely taken care of within the big building, and there would be plenty of room for their politicians and their booms.

If the people down at Olney would not bring their cows or their live stock they could be taken care of.

Bushville people could come in a solid delegation, and have plenty of room in the upper stories for the inhabitants of Monticello. And if the Monticello people were real good, and didn’t crowd the whole Town of Leroy, down in McLean County, could come in. And if the Leroy folks wouldn’t stand around in the halls too much and talk Lockport could come in.

In fact, there is so much room in the Monadnock somebody ought to suggest its being set aside before the national conventions as headquarters for “favorite sons.” 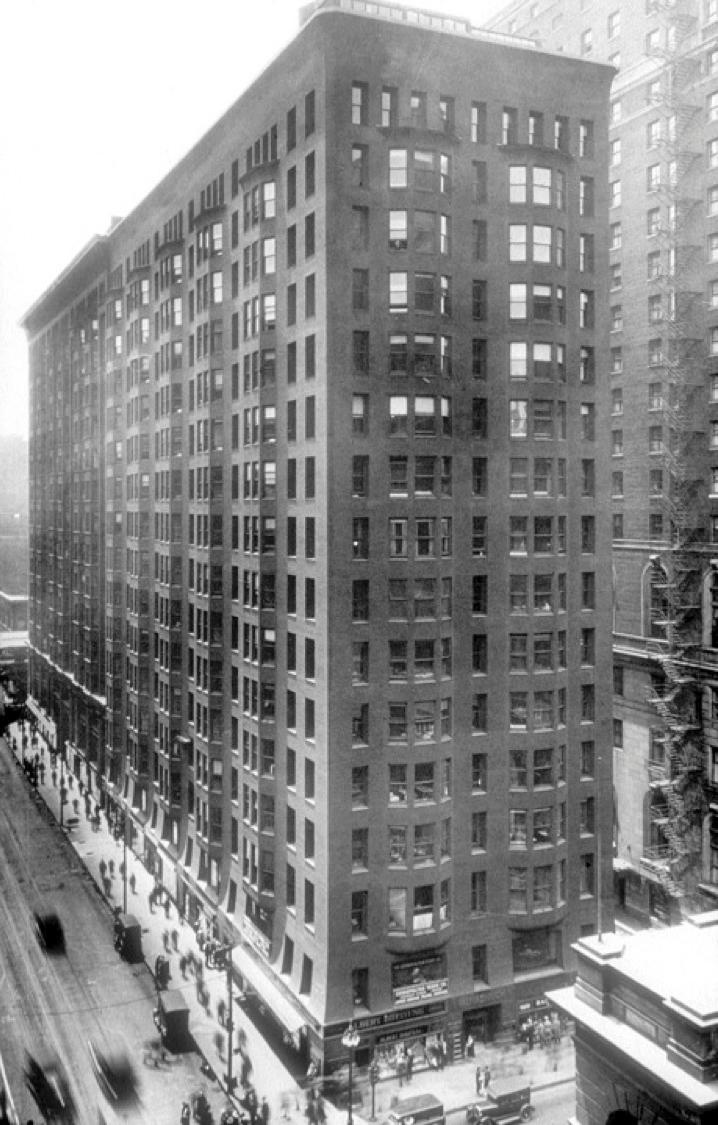 The Monadnock Building, at the southwest corner of Jackson and Dearborn streets, extending along Dearborn to Van Buren Street. Monadnock is the name given by the Indians to a mountain in the southern part of New Hampshire. Although this building extends from street to street, having Custom House Place on its west, its sixteen stories and 180 feet of height make it seem almost as slim as a chimney. The owners refused to rely on the steel-cage construction alone, and ran heavy brick walls to the top, offering beautiful specimens of modern masonry.

The building has 980 feet of frontage, and is furnished with no le s than eighteen elevators. It contains the largest number of offices in any one part of the city about 1,600, for 7,500 inhabitants and in some respects surpasses the capacity of the Masonic Temple. Electricians and railroad men have hived in this building, and three great railroads are here domiciled the Michigan Central, the Atchison, Topeka & Santa Fe, and the Chicago & Alton. The American Exchange National Bank and the Globe Savings Bank are also tenants. The building cost $2,500,000. 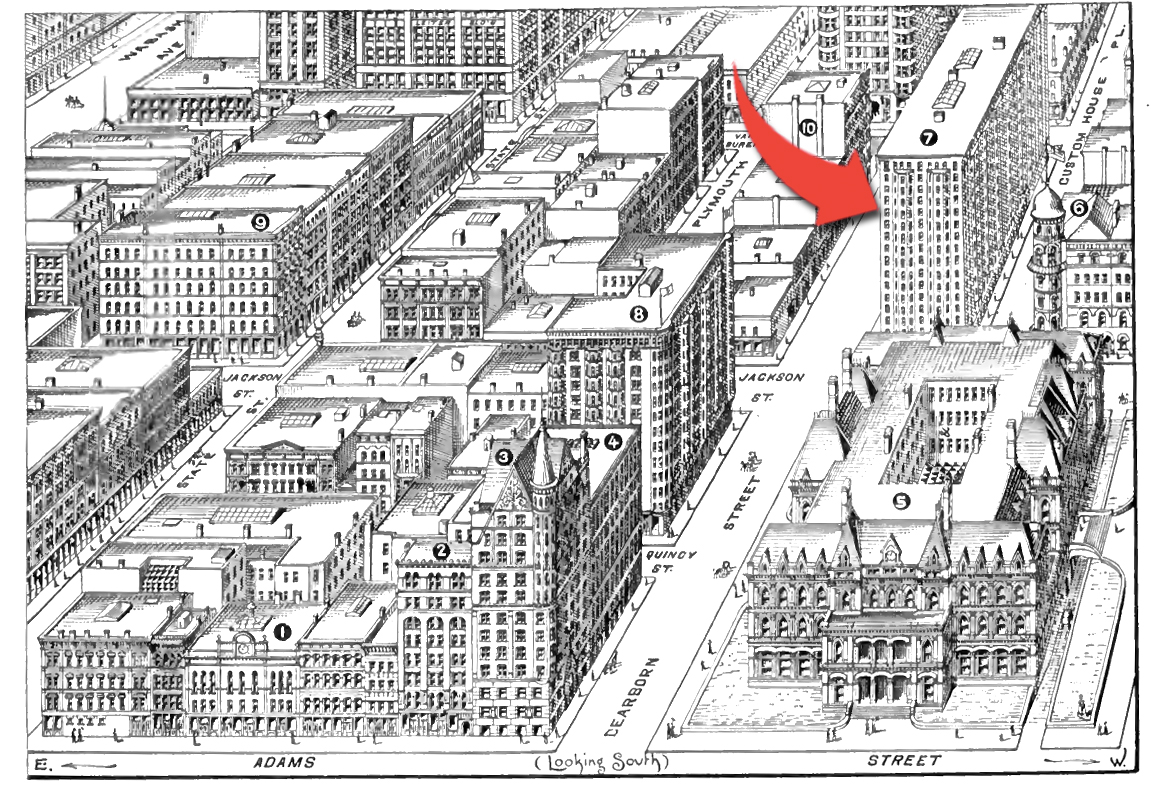 From History of the Monadnock

The North half of the Monadnock was John Wellborn Root’s last and boldest design. Root died at the age of 41, while the building was under construction. At the time of his death, in addition to running Chicago’s largest architectural practice, John Root and Daniel Burnham were responsible for the design and construction of the World’s Columbian Exposition, which was to open the following year. Root’s death forced Burnham to concentrate his energies on the Exposition, so when the north half of the Monadnock rented quickly and its owners decided to build the south half right away, they commissioned another firm to design it: Holabird & Roche, the second largest practice in the City.

The two halves of the building are similar in scale and color, but quite different in style. The north half is often called a fountainhead of modern architecture because of its total absence of exterior ornament. Root evidently felt that all that was needed here was graceful form for the structure itself. The south half of the building, on the other hand, is a masterful early application of classical architectural principles to the design of a tall building.

The Monadnock also marks a historic transition in the development of structural methods. Most of the buildings that preceded it were supported by their outside walls. The north half of the Monadnock is probably the tallest building ever built that is supported primarily by brick walls. At ground level, those walls are six feet thick. Half of the south half of the building is built the same way, but the south quarter of the building is supported entirely by a steel frame, as were most of the tall buildings that followed it. Today, this is called “curtain wall” construction: the façade doesn’t support the building, it’s just a “curtain” to keep out the elements.

The Monadnock was designed so that it could operate as four separate office buildings. Each section stands on its own lot, and at one time each section had its own entrance, elevators, heating system and name: from north to south, they were the Monadnock, the Kearsarge, the Katahdin, and the Wachusett, each the name of a Union navy ship and also the name of a mountain in the developers’ native New England.

At the end of August, 1901 came an invitation from Octave Chanute for Wilbur Wright to address the Western Society of Engineers in Chicago on the subject of gliding experiments. Presented to on September 18,1901 at the Monadnock Building, the speech Wilbur delivered—modestly titled “Some Aeronautical Experiments”—would be quoted again and again for years to come.

Published first in the society’s journal in December 1901, it also appeared in full or part in The Engineering Magazine, Scientific American, the magazine Flying, and the Annual Report of the Smithsonian Institution. In the words of a latter-day aeronautics specialist at the Library of Congress, the speech was “the Book of Genesis of the twentieth-century Bible of Aeronautics.”

THE COMMISSION on Chicago Historical and Architectural Landmarks voted unanimously last week to recommend that the south half of the Monadnock Building, 53 W. Jackson Blvd., be designated a city landmark.

William McLarenahan commission director said the recommendation was sent to the City Council where it will most likely be referred to committee.

The 80-year-old, 16-story commercial building, designed by William Holabird and Martin Roche, two of the city’s most innovative architects during the late 1880s and ’90s and the early part of the 20th Century, was built at the south end of the Loop at a time when the area consisted of little more than shanties and mud puddles.

The north half of the building, designed by Daniel Burnham and John W. Root, and completed two years earlier than the south half, was recommended for city landmark status in 1970. However, the City Council still has not acted on the recommendation.

“THE SENSE OF unity of the two halves represents one of special contributions of the Chicago school of architecture,” Lewis W. Hill, commissioner of the Department of Development and Palnning, stated in a letter to the Landmarks Commission last year in recommending that both halves be saved from the wrecker s ball. 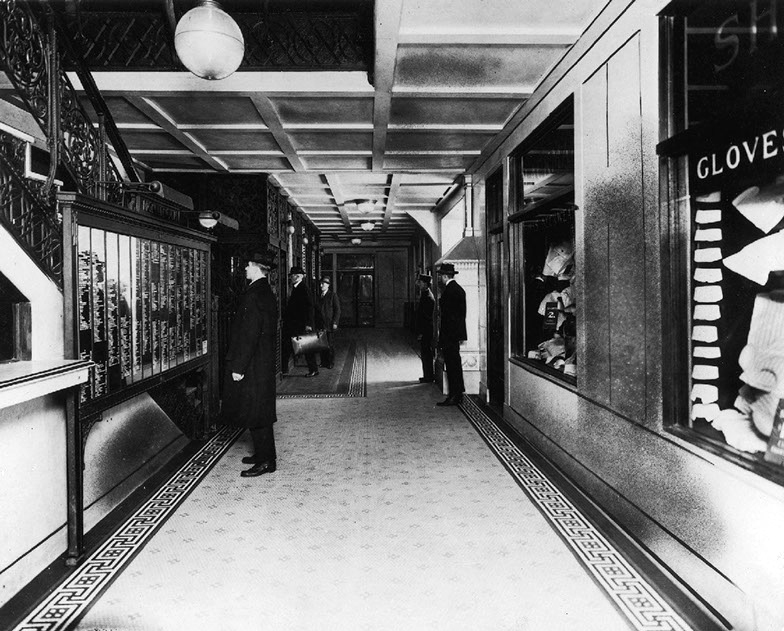 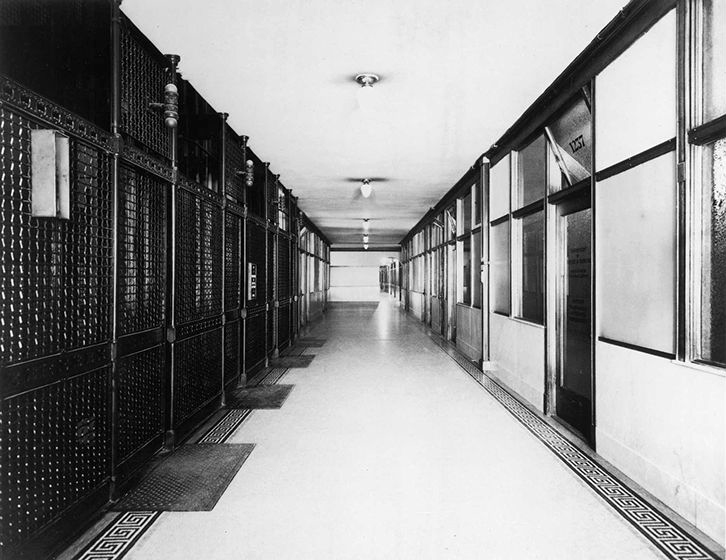 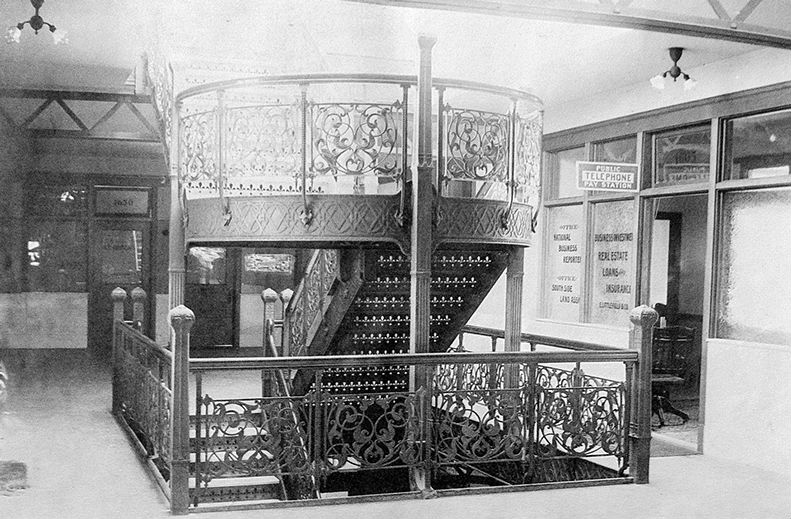 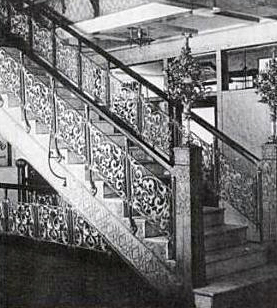