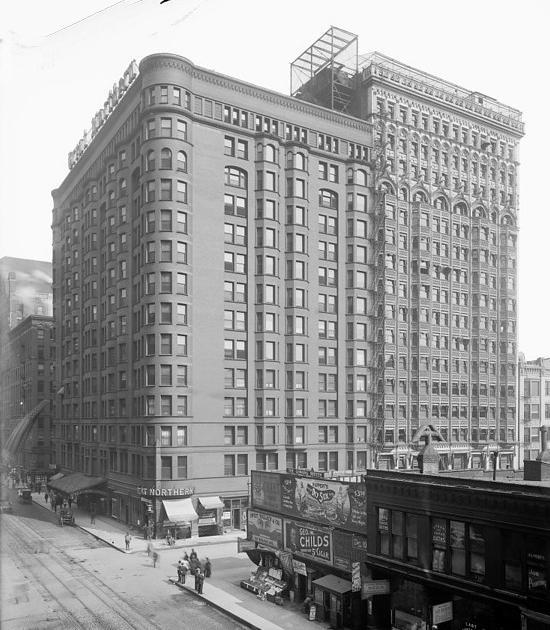 The Great Northern Hotel was an impressive 500 room 16-story hotel that was located at the intersection of Dearborn and Jackson Boulevard. The hotel was originally constructed 1891 by the architecture firm of D.H. Burnham and Company, and was originally called the “Chicago Hotel”, but Proprietors / Owners, Hulbert & Eden, changed the name to the “Great Northern”. The hotel was extremely popular during the 1893 Chicago World’s Fair, and was also just around the corner from The Fair and Woolworth’s Department Stores. There was a Thompson’s Cafeteria nearby.

After Root’s death in 1891, Daniel Burnham built the adjoining Great Northern Office and Theatre Building at 20 W. Jackson Blvd. The two buildings together formed a connected half block structure and enclosed the largest interior court in Chicago.

The hotel was also opposite the Government Building. In 1910, the hotel advertised as having a “Café, Grill, and Lunch Room at Popular Prices.” At that time the hotel had eight dining rooms. The hotel was ultimately demolished in 1940. The Great Northern Office and Theatre Building were demolished, in 1961, for the Dirksen Federal Building. 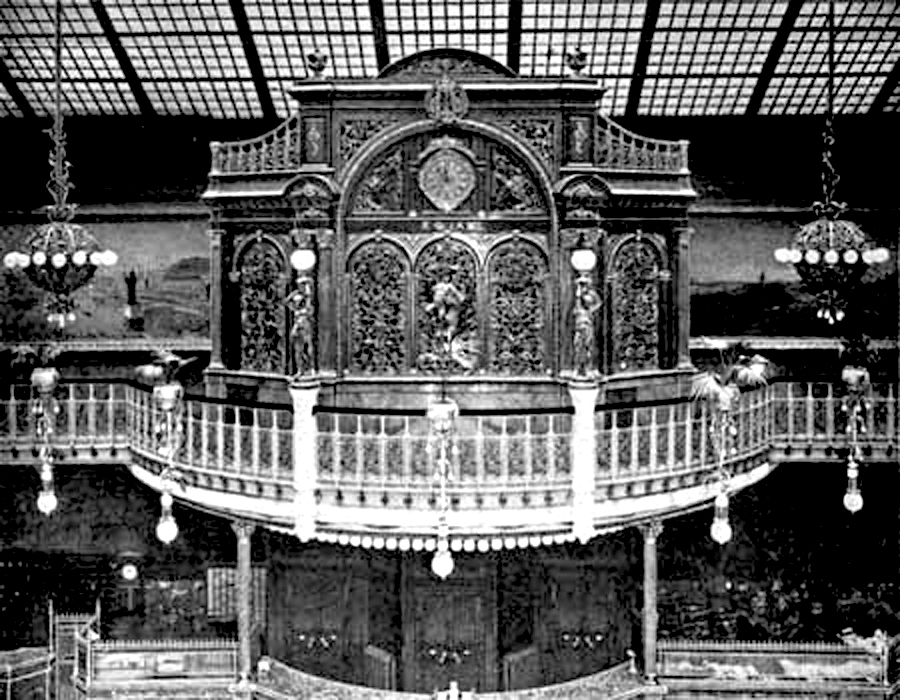 The Aeolian Pipe Organ at the Great Northern Hotel in Chicago, built and installed in 1896, was a renowned landmark in its day, but the following story from the Chicago Chronicle in October, 1897 must have endeared it to the hotel guests for ever and a day!

A few nights ago, when the big Aeolian at the Great Northern began its usual evening programme, it didn’t seem to work just right. The Aeolian was doing its level best to play the wedding march from Lohengrin, but made an awful mess of it.

The first strain, which everyone remembers goes “Rum-tum-te-tum,” was followed by “Meouw-wow-ow.” All the crowd looked up at the organ and tried to locate the spot where the unusual accompaniment came from. The next strain of the march was followed by a screeching yowl that was heard clear up to the “G” floor. People at dinner dropped their knives and forks and looked nervously at each other and then at the doors and windows. Just as the third yell came out of the Aeolian, Proprietor Eden was seen on the second floor, stealthily moving toward the instrument with a ladder in his hand. Mr. Eden crept up close to the Aeolian and listened for a moment. Then he put his ladder against the right side and slowly made his way to the top.

When he got up he reached over and put his hand down inside of the E flat pipe. There were no results at first. Then he stood on tiptoe and shoved his arm to the shoulder down the mouth of the pipe. There followed a terrible yowling and scratching, but the Colonel pulled, and with a noise like the departure of a tight cork from the neck of a beer bottle, he pulled the hotel cat out of the pipe and carried it down to the baggage room, where it belongs. 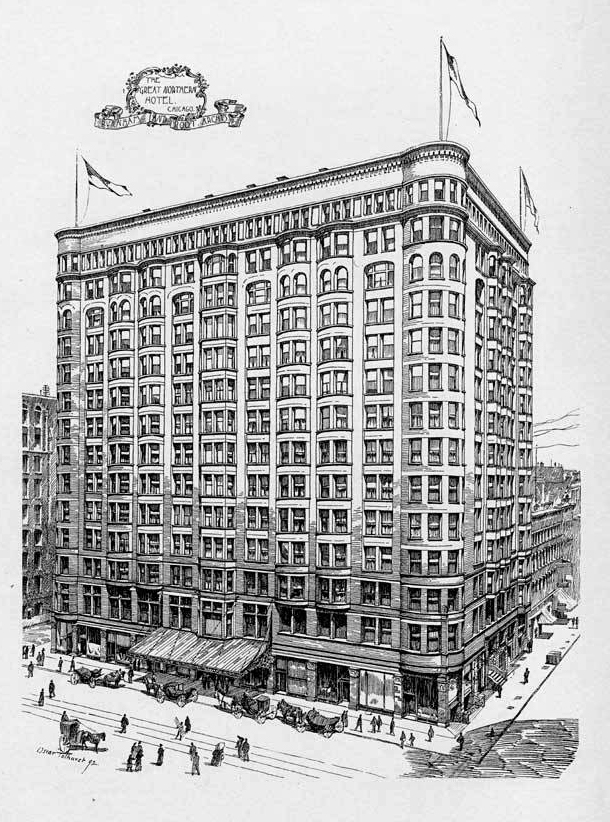 BUILDING OF THE YEAR

Chicago has not fared well In the way of new buildings when previous years are taken into comparison. A vast amount of building was done in the period before the World’s Fair and each year s record still suffers by a comparison with that. Cost of buildings in 1895 has been satisfactory as compared with last year, while tite number of buildings and the amount of frontage involved have shown a decrease. Among the more prominent buildings of the year are the Fisher, the Great Northern Hotel Theater and office, the Studebaker, Lewis Institute, and the Davies.

On a piece of property l00x100 feet in size, extending from Jackson to Quincy street, and 100 feet east of the present Great Northern Hotel, the theater, office building, and addition to the hotel will be built. On the Jackson street side will be the office , on the Quincy street portion the continuation of the hotel, with the theater in between. The office building will extend back forty-five feet. It will he sixteen stories high and will contain 300 offices. A connection will be established with the present hotel. The entrance to the office will be at the extreme eastern end of the property and will be twenty feet wide. The Quincy street frontage, containing the hotel addition, will be a continuation of the floors as they are at present. The annex will be sixteen stories high—two stories higher than the main building. The rooms will be large and well finished. New cafes and banquet halls will be erected. with the idea of making the hotel a European and American one combined instead of simply a European one. as it is at present. The addition will contain 300 rooms and the elevators will he changed about so as to reach the whole building. Entrance to the theater, finished in white Mexican onyx, will be on both Jackson and Quincy streets. The interior of the theater will have a seating capacity of 2,000 and will have three balconies and a large stage. Retiring rooms for women are planned for the right side of the interior and smoking rooms for men on the left, with foyer between. The stage will face towards the main hotel. D. H. Burnham & Co. were the architects for the improvement. The building will be entirely fireproof. The drops on the stage will be on steel rollers in frames, and all the scenery will be of asbestos. One million dollars is estimated as the cost. 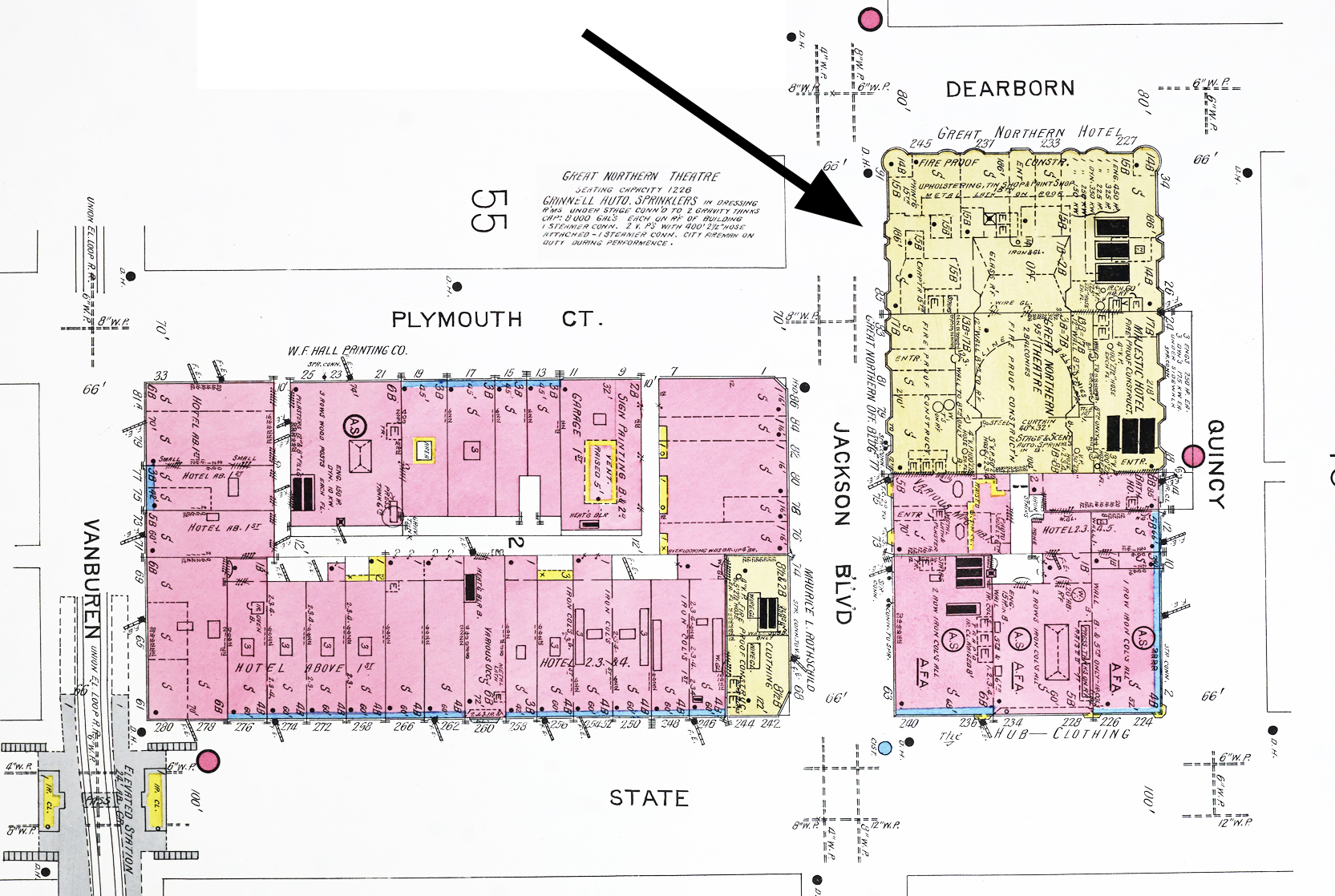