The Tree Studio Building and Annexes was an artist colony established in Chicago in 1894 by Judge Lambert Tree and his wife, Anne Tree. All the buildings are steel-framed and two stories high. The U-shape plan of the complex surrounds a courtyard. The west facade of the Tree Studio is composed of a full length cast iron arcade at the ground level for small stores. The second story is covered in a buff colored Roman brick with large windows for the artists’ studios. The decorative features include dormers, chimneys with clay pots and a cast iron frieze below the roof soffit. The Ontario and Ohio Street Annexes both have mansard roofs and are faced with brown brick. Each contains four large art studios and one or two-bedroom apartments. 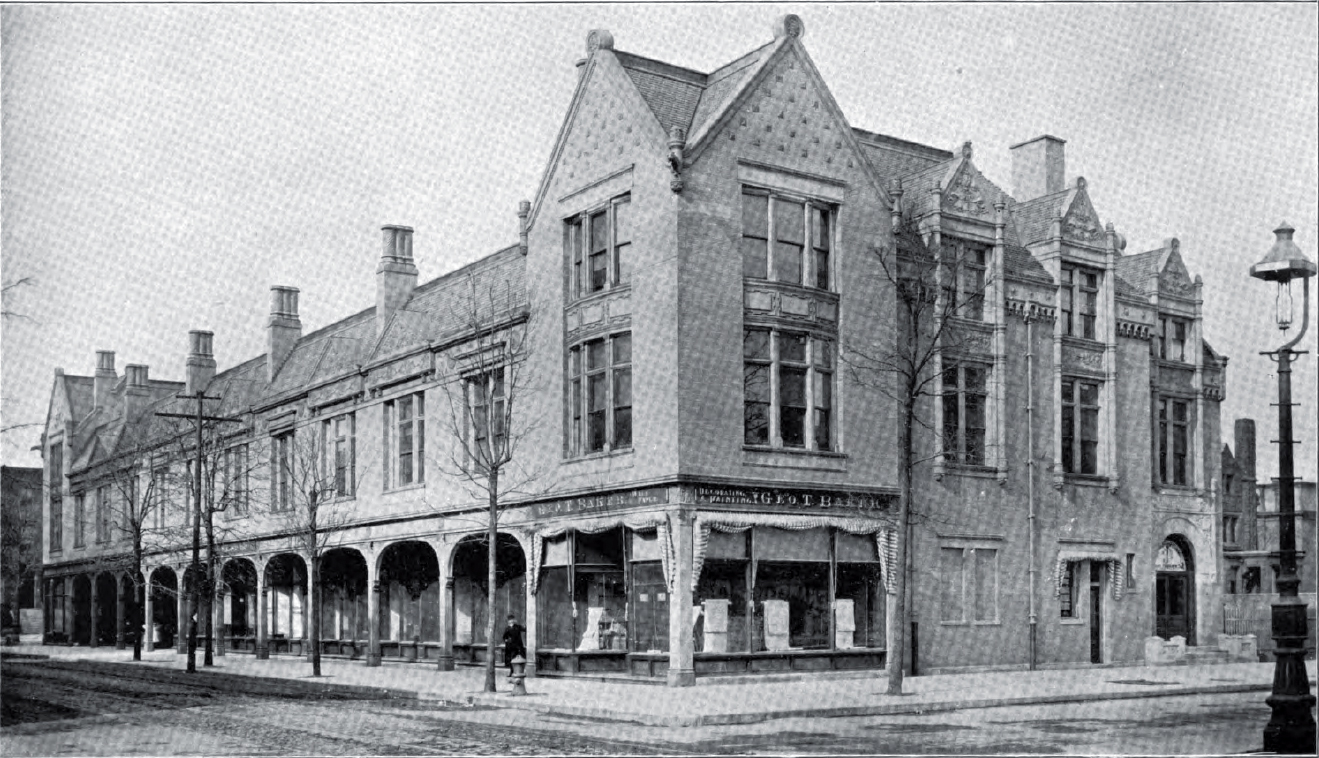 A LINE O’ TYPE OR TWO

“Why don’t you write,” said a clubfellow, “a story about the Tree studios and the life there?” A tall order, sir; we must refer you to “Trilby,” and “La Vie de Bohlme,” and everything that has been written about Latin quarters and art “colonies.” And yet the place has a flavor all its own, a true Chicagoan character. It is rich in atmosphere for any novelist of the Chicago scene.

Before New York became self-conscious about its Greenwich Village, the Tree studio building stood there, facing State street between Ohio and Ontario streets. The shops along the street car line have never mattered except as rent-payers. Behind and above them, In rooms opening off a block-long corridor, smelling of paint and gas. ring cooking, the reasons why this building is famous may be found. There several generations of plain and fancy artists have dwelt, and worked, and dreamed. Many have spent most of their lives in these ateliers. The place Is a veritable pueblo of the arts and crafts.

The main structure was built before the of the century (1895). The duplex apartments that adjoin it, on Oho and Ontario streets, came about 15 years later to afford housing for artists of substantial earnings. They inclose a courtyard or patio which, on moonlight nights in summer, is a surprisingly romantic place.

Professional affiliation with the arts has always been required of the tenants. The studio party nonprofessionals who thrust themselves Into such environments have been discouraged, But the social life of the followers of the faith has been spirited, and communal costume carnivals, when every den In the barracks was an house, are cherished of their survivors,

Our own Tree studios period was In the decade, 1915-’25, when bathtub gin was the vin du pays. Too many years have passed;.. We must drop into the old place again and maybe write a story about It. 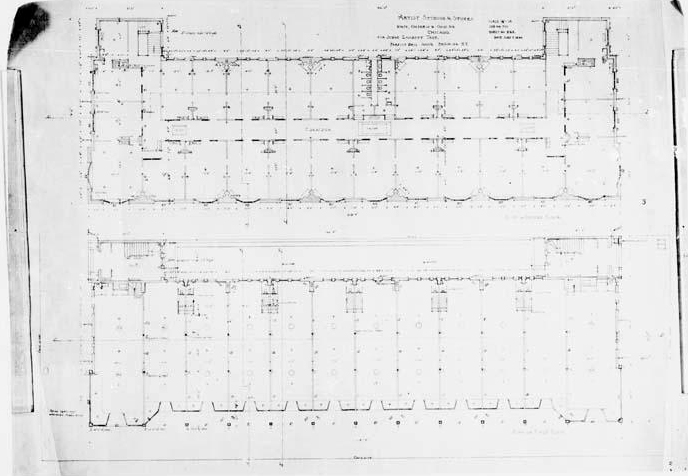 Across the street Arthur Tree has put up a small studio building, with two duplex and very grand studios, which Ralph Clarkson and Mr. and Mrs. Stacey have secured. This building has a charming garden in the rear, and makes an angle with the old-fashioned Tree Studio Building, put up years ago by Judge Lambert Tree in answer to the needs of that period. Many young married women think that the studio flat with its kitchenette solves the problem of the high cost of living.

Swedes may come and Swedes may go, but any studio chatelaine can broil a chop or stir up an omelet

Every one of these chilly nights the department and its followers have dashed by the Grand Old Tree Studio building, corner of Oho and state streets, and last night at 11 o clock the red wagons with the long ladders halted there.

Most of the birds In the Tree (building) had retired or were on the point of retiring—nighties, pajamas, that sort of thing. Some had just performed the weekly ablutions and were Interrupted with soap and brush in hand by the Noble Fireman with his ax. Other little birdies in the nest were giving Sunday tea and with their guests hastily left “tea and French pastry” to rush Into the smoke filled halls.

Miss Antoinette Donnelly in Studio 11. had just bought a Baby Grand Pi- ano, which was not yet insured. In. stead of obeying the shouting firemen she sat down by the grand piano and wept-clutching her other treasure, a string of beads.

Miss Josephine Huddleston of Modelistic fame did the Young Heroine acl by knocking on doors till her knuckles were skinned—e’en as the lights went out and all was inky smoke.

Edward Oldefest, Studio 24, was en a group of elegant South Siders when the tocsin clanged and his guests ran out into the snow minus hats and coats. Some saved vanity bags.

Mrs. Samuel Kennedy in Studio 1 was clad only in a thin white robe as she excitedly made for the exit.

Joshua Saves His Cane.
Joshua Wellington Reynolds, in studio A, found he had saved his Cane and a new candelabrum of silver—valued at $15. He has a studio filled wth valuable paintings and a collection of rare old tapestries, he completely forgot.

Jarvis Hunt, in the studio annex mounted guard over his Ching F China and refused to budge. Albli Polasek, he who sculpted The Sower, was torn by emotions—whether to sav his life or die with his Half-Finishe Masterpiece.

Wellafter models, artists, and friend had torn excitedly out and around an around in the snow the threatens holocaust died out-faded into smudgy bonfire. Only $25 worth of actual damage was done, and it started in the garbage chute, at that. Disgusting that Art should have to b disturbed by the sordid touch of mur dane things-is it not?

The Janitor Outta Luck.
The janitor—C. A. Phillips-Was the only undisturbed member of the Whole Tree building. For months he has admired a Saucy Painting, “Lyda,” in one of his halls. He had got (a block) away it when th firemen shouted: “All is well!”

In Celebrating Tree Studios’ Past, Exhibit Can Also Impact The Present

Not so long ago, art exhibitions had the power to bring about change. The change was limited, of course, for it usually was a matter of shows influencing the direction of work by artists who saw them. Still, that power was as remarkable as any of the later effects of mass media such as movies or television.

Exhibitions that have changed social attitudes are something else. In the last half of our century, shows have been organized on behalf of any number of causes, but because the larger part of their audience already is in favor of them, it has been almost impossible to gauge the exhibitions’ success as agents of conversion. 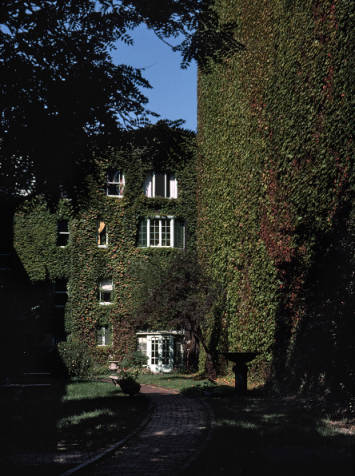 No such problem should occur with “Capturing Sunlight: The Art of Tree Studios,” the show that just has opened at the Chicago Cultural Center. For more than 20 years, people of conscience have worked to save this oldest group of functioning studios for artists in the United States, yet the building on Ohio, State, and Ontario Streets still faces partial demolition by developers. If landmark status finally is extended to the whole structure because of support at a public hearing on Thursday, it will likely be owing to the effect of this singular exhibition.

Presenting 250 works by only a fraction of the more than 600 artists who lived in (or visited) the Tree Studios, the show celebrates a century of creativity by painters, sculptors, architects, writers, musicians, photographers, designers, illustrators and actors. As is invariably the case with a group exhibition determined by locale, the majority of artists are lesser-lights past and present, but there also are such Chicago luminaries as Boris Anisfeld, John Warner Norton, John Storrs, Richard Florsheim, Ellen Lanyon and Claire Prussian.

The exhibition became a pet project of Lois Weisberg, commissioner of the Chicago Department of Cultural Affairs, after she went on a tour led by artist, resident and longtime crusader on behalf of the building, Barton Faist. As Weisberg has written: “It was clear to me that Tree Studios has played a significant role in the culture of Chicago, and that Barton’s passion for the history of the building, its residents and their artwork should not be ignored.”

Each of the three rooms of the show has a different focus. The first is on the actual structure built by Judge Lambert Tree in the backyard of his Wabash Avenue — then Cass Street — mansion. Tree’s wife, Anna, who had a strong interest in the arts, had taken him to see a studio building in New York so he might construct ateliers to persuade artists working on the World’s Columbian Exposition to stay in Chicago.

The complex was designed by New York’s Parfitt Brothers in collaboration with the Chicago firm Bauer and Hill. It ran along State Street between Ohio and Ontario Streets. Commercial spaces on the ground floor were to produce income to help keep artists’ rents low. All the studios had connecting doors to prompt interaction. The work the artists created could be shown in cases in the hall of the building. A large garden allowed for informal gatherings.

By Tree’s death in 1910, the waiting list for rentals had become so long that trustees of the estate eventually commissioned Hill and Bauer’s successor, Arthur F. Woltersdorf, to design an addition to the building that would run east on Ohio Street. It opened in 1912, and the following year the same firm provided yet another addition, at the opposite end of the original structure, on Ontario Street. Medinah Temple had replaced the Tree mansion, so a final addition was never built. The entire structure contained 50 studios arranged around a garden. This is the complex represented in the exhibition by a scale model, artifacts, paintings and drawings.

The second room features work on many themes done by residents and a few distinguished visitors, such as John Singer Sargent. The styles range from Victorian narrative painting to abstraction and surrealism, though most of the pieces are representational and academic. This conservatism establishes an important kinship with another surviving group of artists’ studios, called La Ruche (the Beehive), in the 15th district of Paris.

Like the Tree Studios, La Ruche was connected with a world’s fair, the 1900 Exposition Universelle, for which it was the wine pavilion. Albert Boucher, a successful academic painter and sculptor, envisioned an enclave for like-minded artists and purchased the pavilion designed by Gustave Eiffel. That few of the artists who lived there ever were pathbreaking has in no way lessened the pride of French citizens, who long ago included the still-functioning studios among the city’s many tourist attractions. That should have been a lesson for Chicago.

THE 98-YEAR-OLD Tree Studio Building—two stories of artists’ lofts and small at 601 N. State St—was for landmark status Monday by a city commission. The nomination was made over the objection of the building’s owners, the Medinah Temple Association, whose attorneys argued that such status may frustrate future plans to develop a larger building on the site. If .the City Council approves the nomination, the owners would find It nearly impossible to obtain a demolition. Ira Bach, chairman of the Commission on Chicago Historical and Architectural Landmarks said the building has both historic and architectural signifi- cance for the clty. It was desIgned by architect Arthur Woltersdorf for Judge Lambert Tree, who after a career as a jurist and ambassador to Russia, ordered the studios built as a haven for local artists in search of well-lit apartments at affordable rents.

Landmark Status
The State Street building was listed as a Chicago Landmark on February 26, 1997. The Ohio Street and Ontario Street annexes and courtyard were added as Chicago Landmarks on June 27, 2001. The complex was listed on the National Register of Historic Places on December 16, 1974.