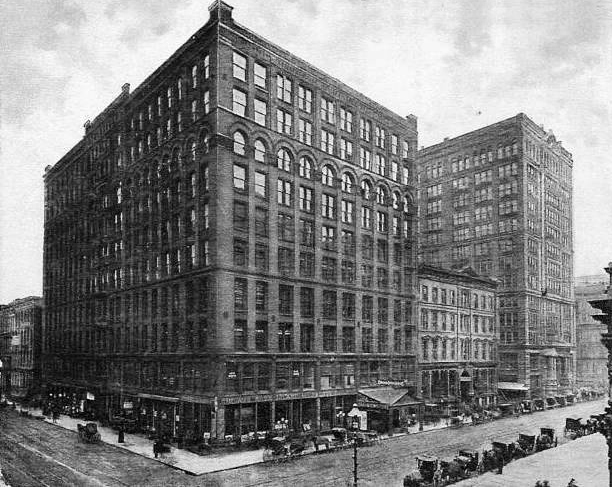 Located in the Chicago Opera House building, a magnificent structure, southwest corner of Clark and Washington streets, opposite the Court-house; close to the principal hotels and convenient to railroad depots and street car terminals. J. W. Norton & Co., proprietors; David Henderson, manager. This is one of the handsomest as well as one of the most popular theatres in the city. It is considered absolutely fire-proof, every precaution known in modern architecture having been taken to make it so. The theatre is built entirely independent of the main building, except so far as the entrance and exits are concerned.

The theatre has a seating capacity of about 2,300 The proscenium opening is thirty-six feet wide, and the height from stage to “gridiron” is seventy feet, making it one of the finest stages in the country for plays requiring machinery to produce spectacular effects. The main floor of the auditorium is constructed of fire-brick or tiling, supported upon arches covered with a solid bed of cement; all the galleries and boxes are constructed of iron and steel, and there is scarcely a piece of wood to be found in the entire interior. The dressing-rooms are below, and are large and comfortable. There are fourteen exits distributed over the house. The house is illuminated by electricity exclusively. Admission prices. 50c., 75c., $1.00 and $1.50, according to location. Boxes, $10, $12 and $15.

The Chicago Opera House was opened to the public on August 18, 1885. The first performance in the new theater was of Hamlet starring Thomas W. Keene. From 1887 to 1890, the Chicago Opera House served as the official observation location for recording the climate of the city of Chicago by the National Weather Service.

The theater suffered a fire in December 1888, which mainly damaged portions of the roof. However, the roof was repaired, and most of the exterior of the building remained undamaged. During its existence, the Chicago Opera House was the site of the premiere of several successful musicals such as Sinbad and The Arabian Nights.

The last performance at the building was the stage play The Escape by Paul Armstrong (later made into a film, now lost, by D.W. Griffith in 1914). Demolition on The Chicago Opera House began May 5, 1913. The site is currently occupied by the Burnham Center (formerly known as the Conway Building), completed in 1915. 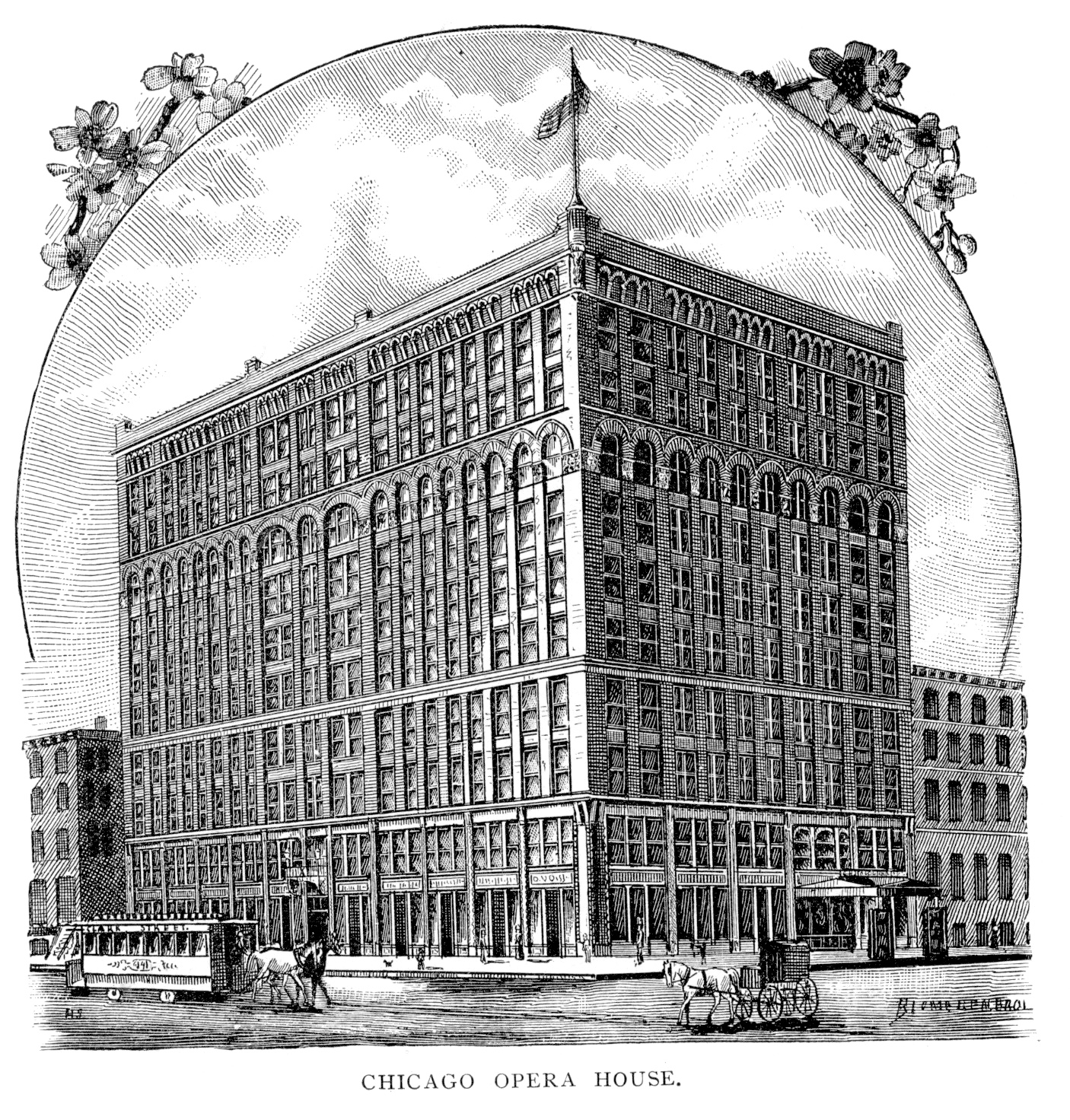 This house is the scene of triumph of the Amazon show, and here the tinseled marching host has scored its greatest success in America, and summer after summer the richest of spectacles and the sorriest of dramas draw crowded houses with no change of bills; a popularity secured by David Henderson, once a first-class daily journalist, who, tiring of literary poverty, has become wealthy as a successful manager. The theater which he manages in Chicago is in a steel building, and though its ulterior once burned, every possible precaution has now been taken to preclude danger from fire, so that if the spectator can not feel safe here, he would do well to avoid all public assemblages.

There are two main exits, one to Washington Street and one to Clark Street, besides passages to the alley in the rear. Neither need there be fear of collapse, for all the galleries and boxes are of steel, and would probably support a weight one hundred times greater than could be piled on them. The West Side cables pass, and the North Side cables are close by this theater, whose illuminations at night make it a landmark of the city. Entering from Washington Street, we reach a reception-room leading to a fine interior. Here are two galleries, and seats for 2,000 people. The prices are $1.50, $1, 75 cents, and 50 cents, and one seat is as good as another. The music and scenery of this theater are surpassed only by those of the Auditorium on rare occasions. In hot weather the gallery is necessarily the warmest place, but it is also the most comfortable when the temperature is below zero. 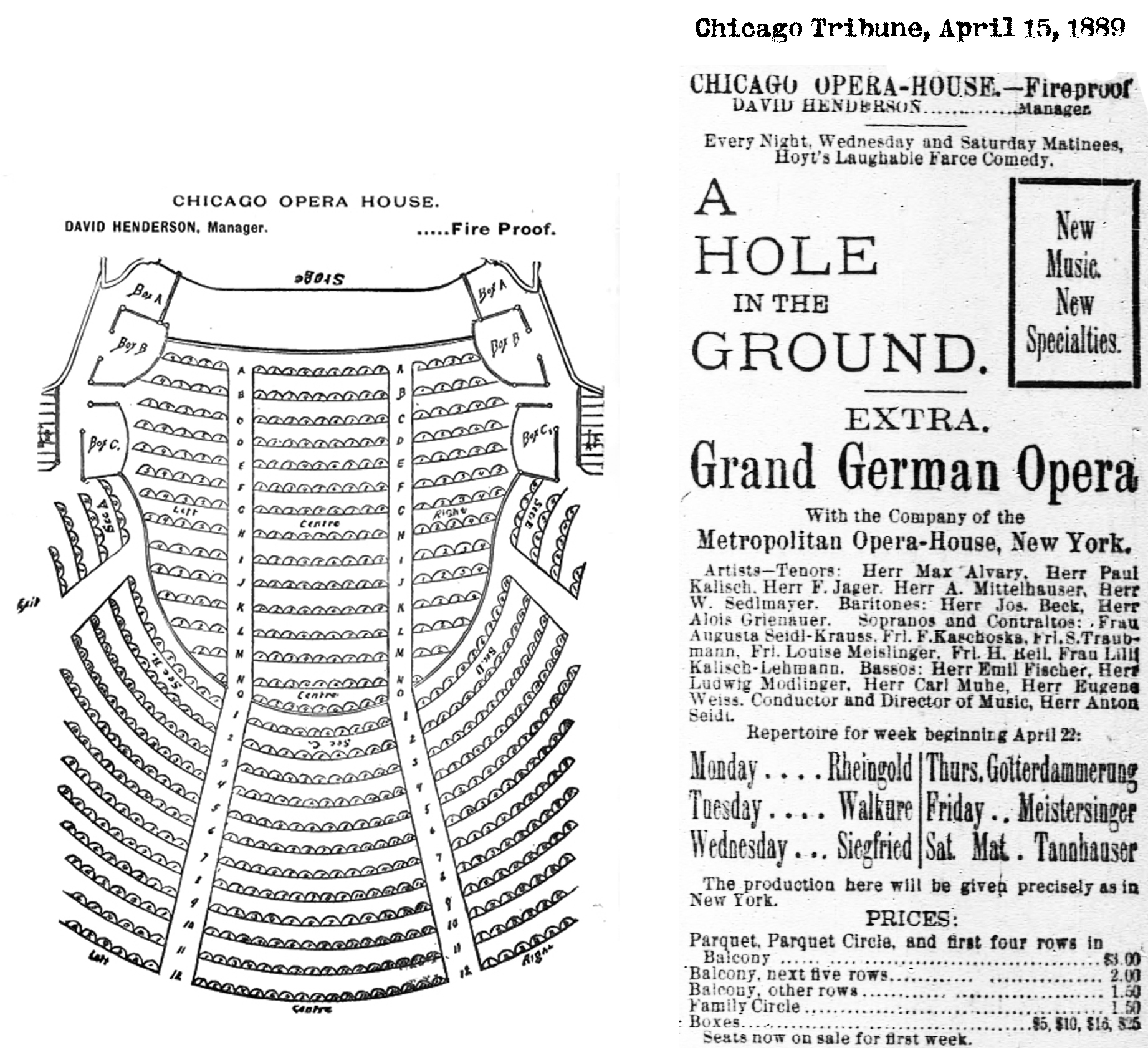