The Selig Polyscope Company will shortly announce to the public the details of one of the most tremendous undertakings ever assumed by a film manufacturer, and one which seems certain to be called to the attention of every man, woman and child in the United States ere many weeks have passed.

In the very near future the Selig people will announce the title of the first picture in a series of thirteen two-reel2 subjects, to be released every other Monday during the following six months. All these two-reel pictures are to be spectacular wild animal dramas, and each subject is to be complete in itself, though it will end in such a manner that the person who has seen one of the series will instantly realize that there is more to come, and be on the lookout for the next picture of the series.

The name chosen for the series is “The Adventures of Kathlyn,” and in each subject Miss Kathlyn Williams, star of the Selig Company for several seasons past, will be featured. Miss Williams in the first picture appears as the heir to a throne in a mythical principality in India, and the following films will show the difficulties she experiences in maintaining her rule, the encounters with wild beasts of the jungle which result from her trips through her kingdom, and many surprising and strange circumstances and events incident to her retaining the crown.

The stories for the entire series are being written by some celebrated author like Rex Beach, Jack London, George Ade or Charles E. Van Loan.

The scenarios for the entire series come from the pen of Gilson Willetts, author of several popular novels and newspaper writer of renown, and are said to be thrilling in the extreme, and to have been prepared with the special aim in view of enabling Miss Williams to display all the many sides of her art.

An arrangement has also been made by which the entire series of stories will run serially in the Chicago Tribune and the entire chain of newspapers with which the Tribune is affiliated through its syndicated news service. In other words, on the Sunday following the Monday on which the first “Adventure of Kathlyn” is released, in film form, the Tribune and some metropolitan newspaper in every large city in the United States, will publish the story of the film in fiction form in their magazine sections. The week after that the first part of the second “Adventure” will appear in fiction form, just six days after it has been released in pictures.

It has been estimated that, as a result of the syndication of the stories, more than forty million people will be reached, and since each story will bear an announcement to the effect that the film on which the story is based is then being shown in the picture theaters of the vicinity, it is expected that the great majority of the readers of the story will seek the theater, where they can see the picture acted in pantomime. The film will also bear an announcement of the fact that the fiction version of the pictured story can be found in the Sunday paper (the name of which will be given) so the circulation of the paper securing the serial story will also be stimulated.

No expense is being spared in staging the immense productions and whole carloads of scenery and stage effects have been built in the Chicago studios of the Selig Company, and shipped to Los Angeles, where the directors have been busy for several months with the staging of the stories. Many thousands of feet of this film have already been produced in India and will be incorporated into this series of productions, thus lending a real atmosphere to the scenes.

A mammoth and unique scheme, which involves the co-operation of the Selig-Polyscope Company and a newspaper syndicate comprising the largest daily papers in the country from New York to San Francisco, a scheme which will secure for the feature pictures concerned more publicity than any other features have ever received, has just been put into operation.

From now on one will see printed in forty-five newspapers a story of a long series entitled “The Adventures of Kathlyn,” appearing on two Sundays a month. In conjunction with the Selig Polyscope Company releases a feature film which portrays on the screen a connected story, which also forms a part of the “Adventure of Kathlyn.”

Thus are put before the the same time two versions of the “Adventures of Kathlyn,” one in the newspapers and one on the screen. This leaves the Selig Polyscope Company newspaper syndicate in conjunction with one another to attract the attention of the general public. One may now enjoy a real novelty in the shape of a stirring photo-theatrical-newspaper undertaking. For those who see in moving pictures and read in the the newspapers the “Adventures of Kathlyn,” there is in store much that is thrilling and full of adventures.

Kathlyn is the heroine of both the motion pictures and the newspaper series. On the screen the original is Kathlyn Williams, the leading woman of the Selig Stock Company. In the newspapers Kathlyn is a protege of the pen of Harold MacGrath, author of many well-known novels, and of the scenarios for this series. 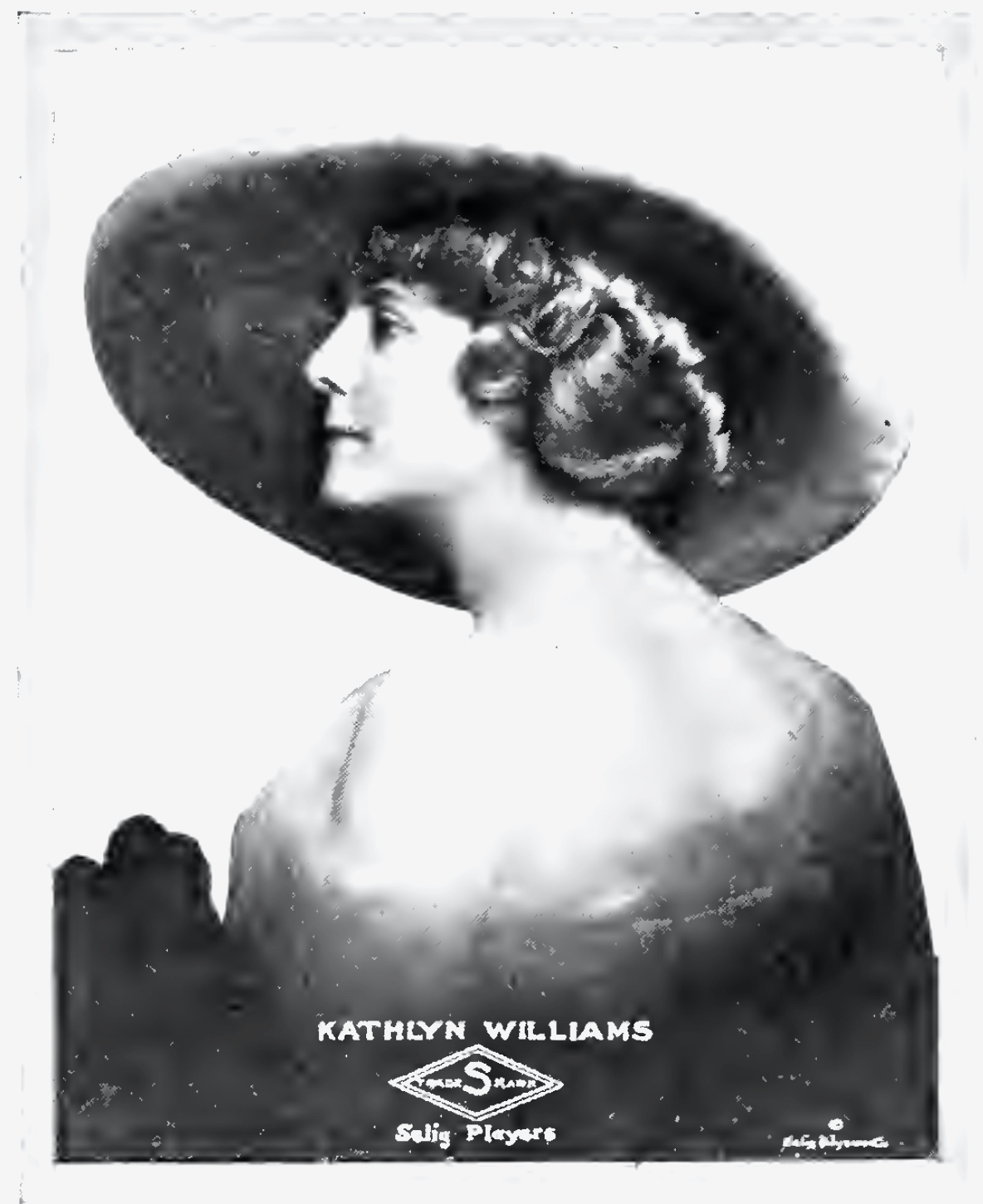 Kathlyn is a young lady of extremely expensive habits. The syndicate is said to have paid MacGrath $12,000 to secure her presence in the papers and the Selig Polyscope Company had manufactured for her and her attendants regalia and costumes valued at more than $17,000. Plenty of wild animals will appear in this series, in which Miss Williams will play the leading role. The whole cost of the series is estimated at $100,000.

It is nothing new for the Selig star to appear in motion pictures in conjunction with beasts of the forests such as lions, tigers, elephants and leopards. She has considerable of a reputation based on previous work with wild animals. She has become accustomed to dealing with them and displays a daring that seems hazardous to the uninitiated. A more capable or favorite actress could not have been picked to play this role.

As regards the story as it will appear on the syndicate syndicate and on which will appear in scenes laid in America, India and Africa. She is said to and a travel through countries peopled by savages and encounters many adventures and on which the motion-picture series is based, it is said to live fully up to the high reputation of the author, Harold MacGrath. Mr. MacGrath has painted a picture of travel and adventure in this and many other countries.

Miss Williams, as the leading woman, will appear in scenes laid in America, India and Africa. She is said to travel through countries peopled by savages and encounters many adventures.

The producer of the motion picture, the Selig Polyscope Company, is especially well fitted for this sort of work. Selig wild animal pictures have been famous for some time. At Edendale, Cal., the Selig Polyscope Company has a million dollar wild animal farm. This is stocked with wild beasts of every sort, many of whom were imported especially from Africa, including the animals less frequently seen, such as giraffes and zebras. A Selig animal picture now is a big thing and the coming pictures under the Selig brand will be still bigger. The Selig factory has every requirement necessary for these pictures. Not only has it the animals, but the plant is lo- cated in a country rich with suitable scenes.

Mr. Selig’s long personal experiences in producing animal pictures will serve him in good stead in these series. He is probably better fitted to undertake so stupendous an undertaking than any other man in the country.

The motion pictures will appear in serial form, twenty-seven reels long. The series consists of thirteen sub- jects. The first picture was released in three parts on December 29, and the other twelve will be in two parts each, and will be released twice a month. Simultaneously with the release of the pictures, the printed story will appear in the forty-five newspapers. The series is being released in the regular service of the General Film Company.

One of the most important issues of this undertaking is the union of the Selig Polyscope Company and the many promi- nent newspapers. It is the first time a similar co-operation has ever been enjoyed in the motion picture business. The daily papers which join forces with the Selig Polyscope Company are among the strongest in the country. Through their combined circulation they are bound to put the “Ad- ventures of Kathlyn” before an extremely large number of persons.

Some of the newspapers which will print the serial story are: 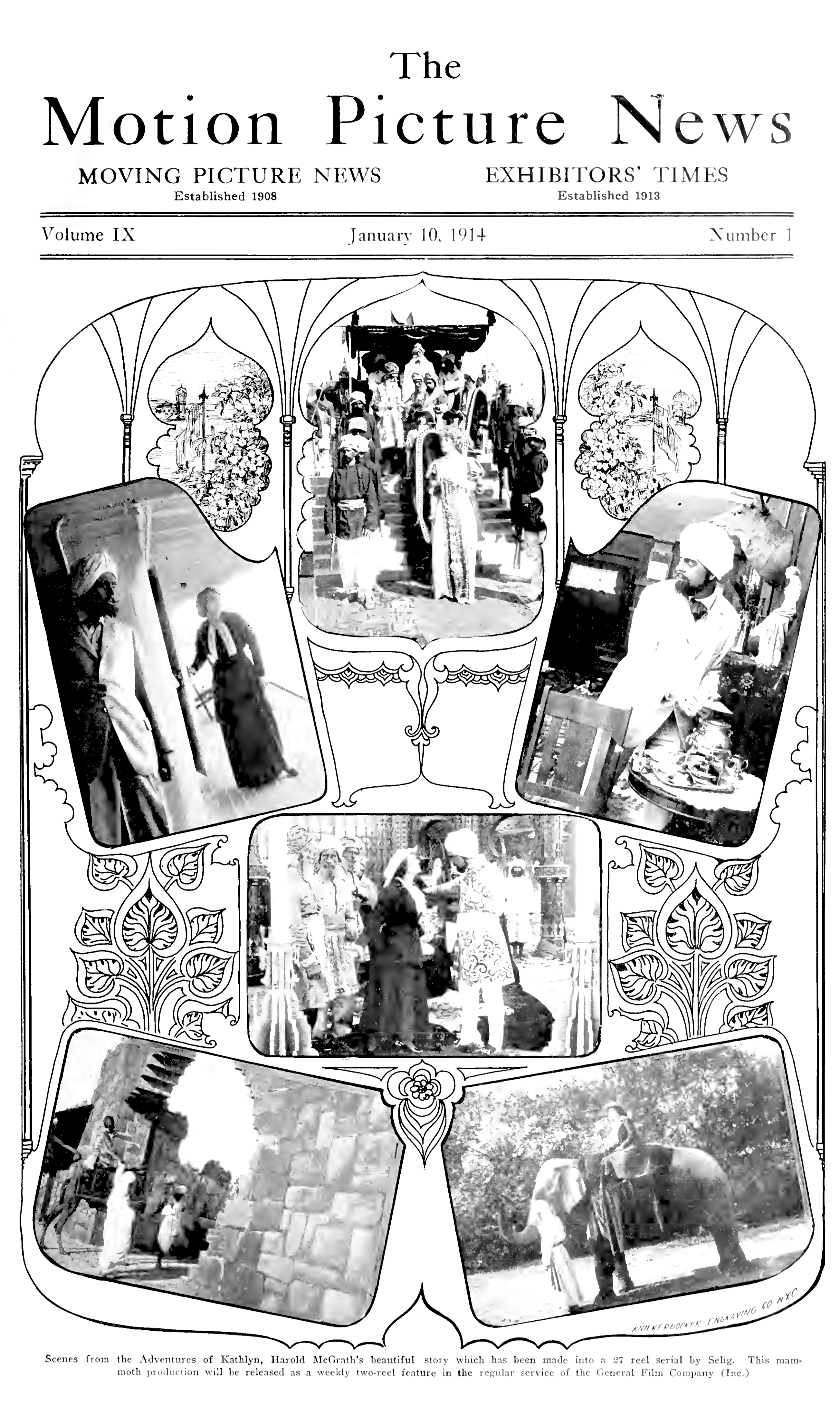 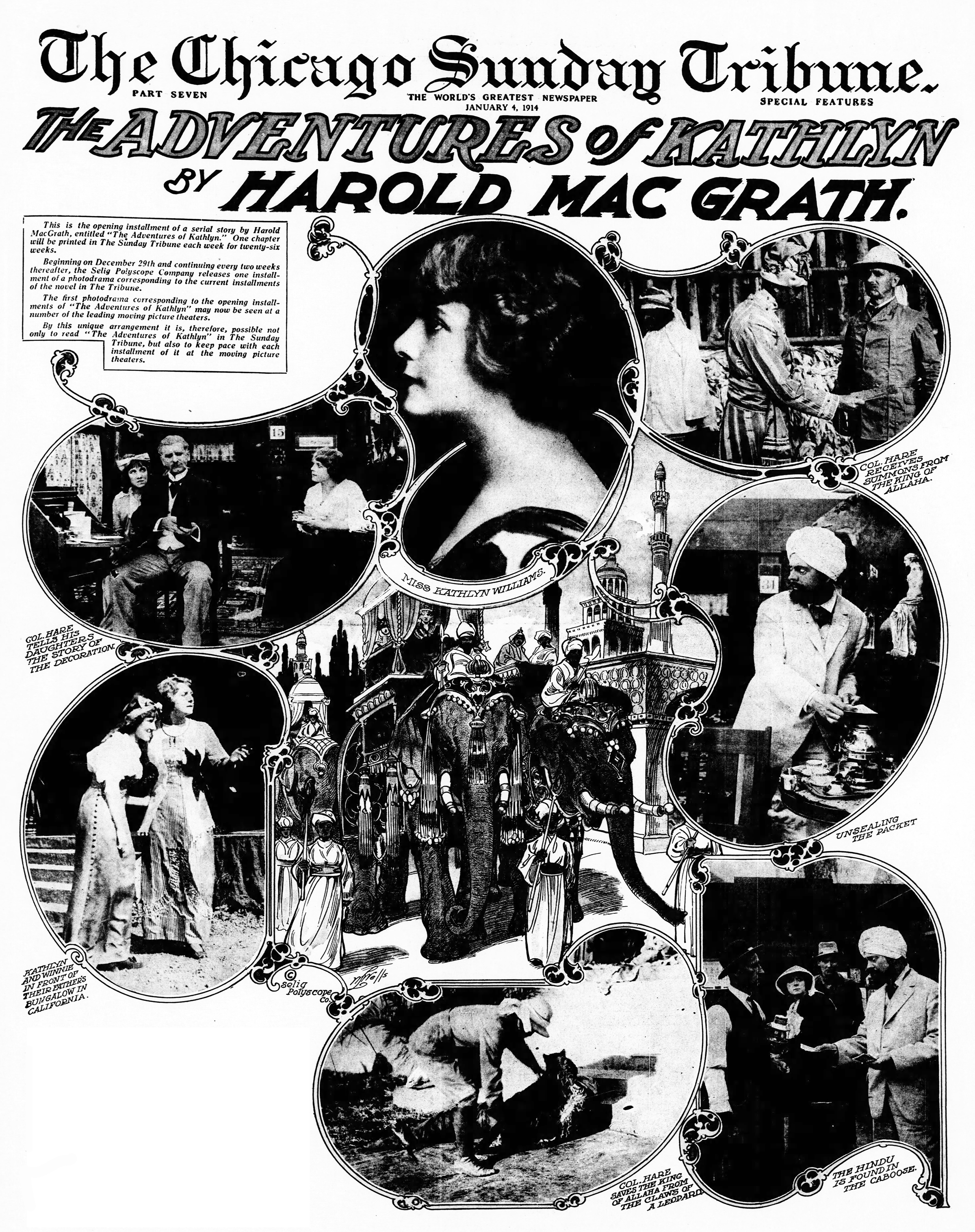 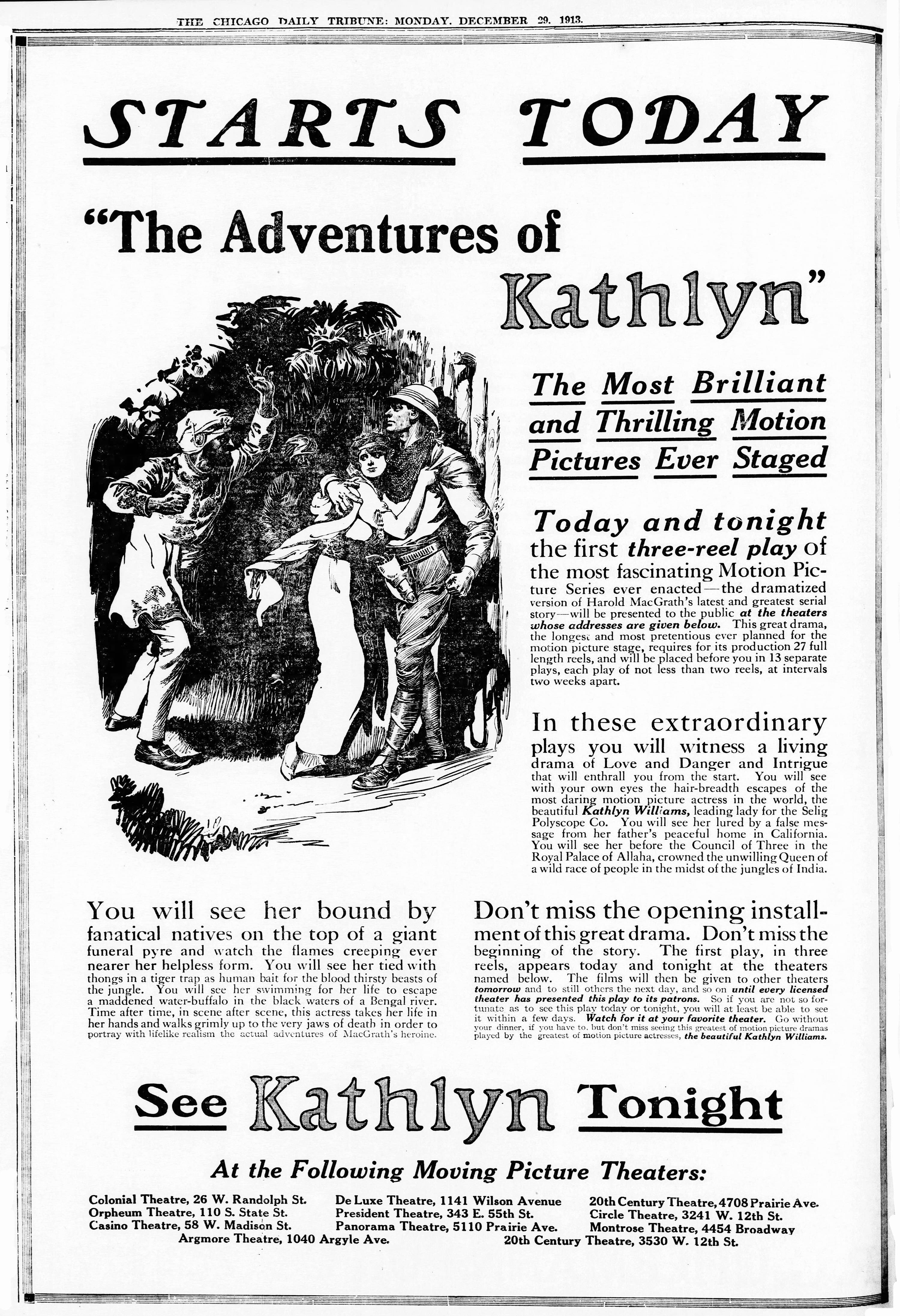 Production started in November of 1913 at the Selig Polyscope Studios in Los Angeles off of Mission Road. The production used a lot of the animals that lived at the Selig Zoo on the studio property there on Mission Road. Selig also supposedly created the first motion picture trailer to help promote the series. The first chapter was 3 reels and the other 12 chapters would be 2 reels each. The entire production cost Selig around $140,000. The Tribune announced a 10% increase in circulation as a result of the film serial’s success. Virtually every review praised the film, noting both its expensive look and thrilling action and adventure, along with rare footage shot in India. The Motion Picture News review stated that the most troubling part of the film was the concluding statement, “To be continued.”

Frank Leon Smith, in a letter to Films in Review (February 1958), wrote that the cliffhanger ending of Chapter One “was a ‘situation’ ending, but other episodes wound up with sensational action or stunts, broken for holdover suspense…gave the serial both the key to its success and the assurance of its doom.”

One of the concessions hung up a white sheet and showed the serial “The Adventures of Kathlyn.” At the end of the reel Kathlyn was thrown in the lion’s den. After this “trailed” a piece of film asking Does she escape the lion’s pit? See next week’s thrilling chapter! Hence, the word “trailer,” an advertisement for a coming picture.

Other heroines that followed The Adventures of Kathlyn included The Perils of Pauline and Pathé’a Exploits of Elaine.

The film is presumed lost. The only prints that exist are in La Cineteca del Friuli film archive (episode 1 only); and in the EYE Film Institute Netherlands (compilation of print fragments). Note that the film uses a blue tint for outdoor scenes and a reddish tint for indoor sequences also that there are no placards throughout this print.

Synopsis
The Adventures of Kathlyn is a story by Harold MacGrath about Kathlyn Hale (Kathlyn Williams). She is the daughter of Col. Hare, an animal trapper sent on a secret mission by the king of a mythical India. Kathlyn is summoned by her dad to join him. Upon arrival she is told by an influential Hindu, Umballah (Charles Clary), that her dad and the king are dead. Against her will she is crowned queen and ordered to marry Umballah. This exciting story takes Kathlyn around India fighting natives and every kind of wild animal known to India. 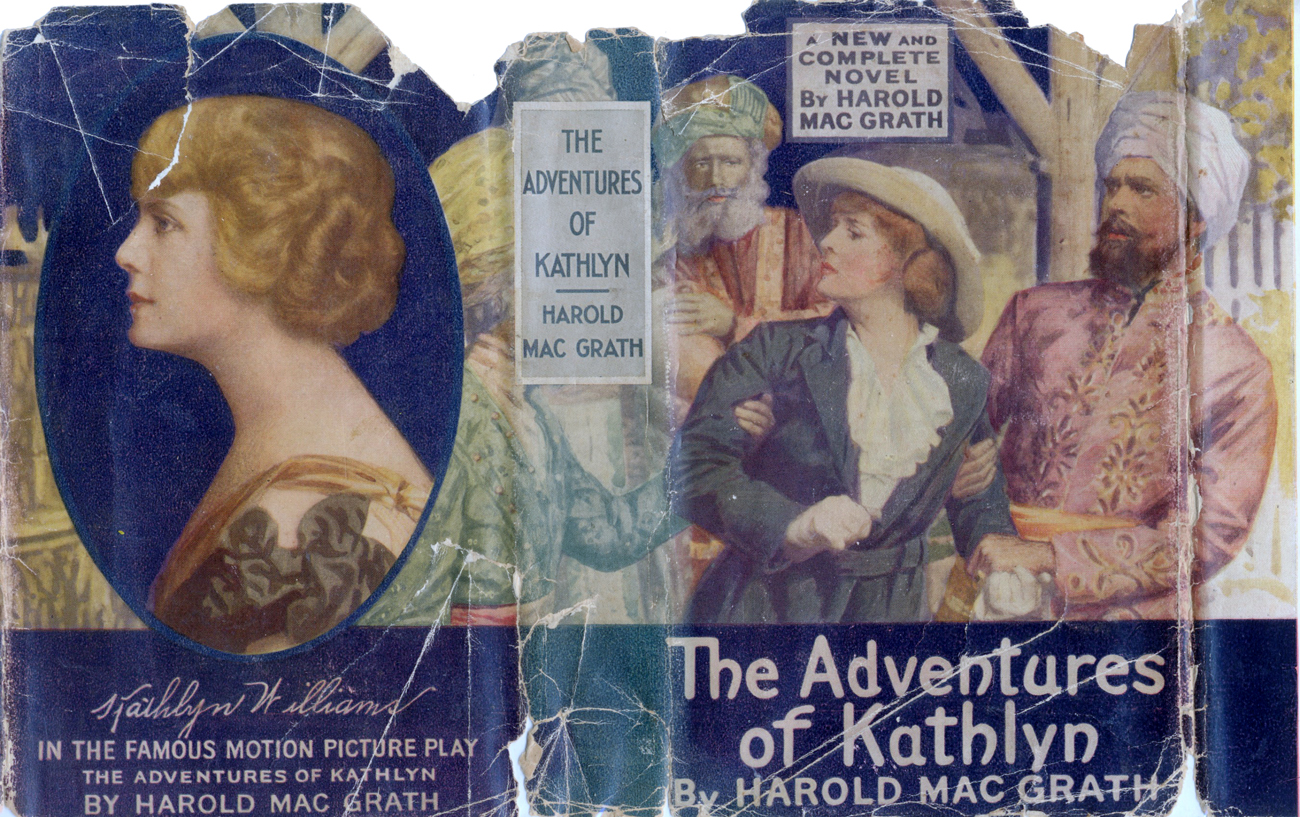