THE ADVENTURES OF KATHLYN (No. 9)—THE SPELLBOUND MULTITUDE (April 20—Special —2 parts).—Kathlyn’s sister, Winnie, has been cowed and terrorized; is forcibly crowned Queen of Allaha, to serve the sinister purpose of the scheming Umballah. By forced marches, Kathlyn, her father and party, reach the city and secure admission to the Coronation ceremony, disguised as animal trainers; but they are powerless to do anything other than observe and plan such action for the immediate future as fertility can suggest. After the ceremonies are over, the little party return to Col. Hare’s headquarters and immediately start plans in train for the rescue of Winnie—Kathlyn plans to gain entrance to the royal harem, where Winnie is known to be held as a prisoner. This she expects to do by having Winnie feign sickness and insist upon sending for a female physician. Kathlyn secures the dress of a practitioner, is admitted to the harem, and eventually starts to smuggle her sister out and escape through the garden. This seems practical until the suspicious Umballah finds that the physician is none other than Kathlyn herself. He orders her to be immediately seized and confined as a prisoner in another room of the harem and held until the conclusion of the festival of the Juggernaut.

The big feature of this festival is an enormous car containing the effigy of the dreadful idol, that is rolled along, crushing devotees in its path as willing human sacrifices. This gigantic car is trundled along on its way toward the Sacred River, but night coming on, the High Priest and his toiling sacristans are forced to leave the big fabric at the top of a hill. Umballah learns of this and conceives a fiendish plan for driving poor Kathlyn into the earth and everlastingly ending her power to thwart him. He secretly has the heroine taken out of her harem prison, and then has her staked down in the path of the car. Happily the keen-eared Pundita has overheard the plot, and she at once informs Col. Hare and Bruce. They rush to the rescue cautiously, but without delay. The staking party have no sooner completed the work, and rush away in the darkness to start the car on its horrible journey, than Bruce and Col. Hare arrive and pull out the stakes, just as the great car comes crashing down the incline, crushing everything in its path.

Umballah, on investigation, finds that his plan failed, and fearing the rifles of Col. Hare’s party, slinks back to the palace purple with rage. His most carefully laid plots appear to go awry, and with death In his clasp, he seems destined to be continuously routed of revenge, However, he has Winnie, and that is currently savage satisfactory to him.

Bruce and Col. Hare have been busy, and Kathlyn’s ready wit in the interim has not been idle, devising another way for the rescue of the young American from a fate worse than death. Ramabai assumes one of bis cleverest disguises, and goes to the palace as an agent for a wild animal show, requesting permission for them to give a performance in the arena. Umballah suspicions something and is rather reluctant to give consent; but, Winnie is queen, and she insists that the entertainment be given, and the Council of Three, singularly enough, agree with her. Bruce, anticipating this, has secretly ordered his men to bore a tunnel from a point under the stage, to another outside the palace walls.

The next scene shows the great Arena in gala decoration, crowded with royalty and the people of Allaha. It is the greatest affair since the Coronation and attracts a vast throng. Lions, tigers and leopards are shown in the great domed cage and then are allowed to run freely through the big arena, and are finally put through their paces by trainers, giving a remarkable exhibition. Then Kathlyn appears garbed as a trainer. A woman trainer is something new to that locality, and when Kathlyn appears in this guise, she is wildly applauded by the people. She agrees to face the savage carnivors and make them perform, provided that the Queen of the day be allowed to stand by her. This personage, of course, is her sister, Winnie, and she imperiously demands the right of a Queen to do as she pleases. She, accordingly, descends from the royal box by a rope ladder into the arena. Umballah is furious, as usual ; but concludes to end it all by turning all the hungry lions loose in the arena. Kathlyn gives the show with the tigers and leopards as her sister stands by the cage. Just then the hungry lions come—a roaring, rampant herd—leaping after them. They rush toward Kathlyn and her sister, but the latter hurriedly rush into the performer’s cage and spring the trap, descending to the tunnel as if by magic. The trapdoor closes quickly, so the angered brutes leap about snarling and roaring once again balked of their human prey. (To be continued). 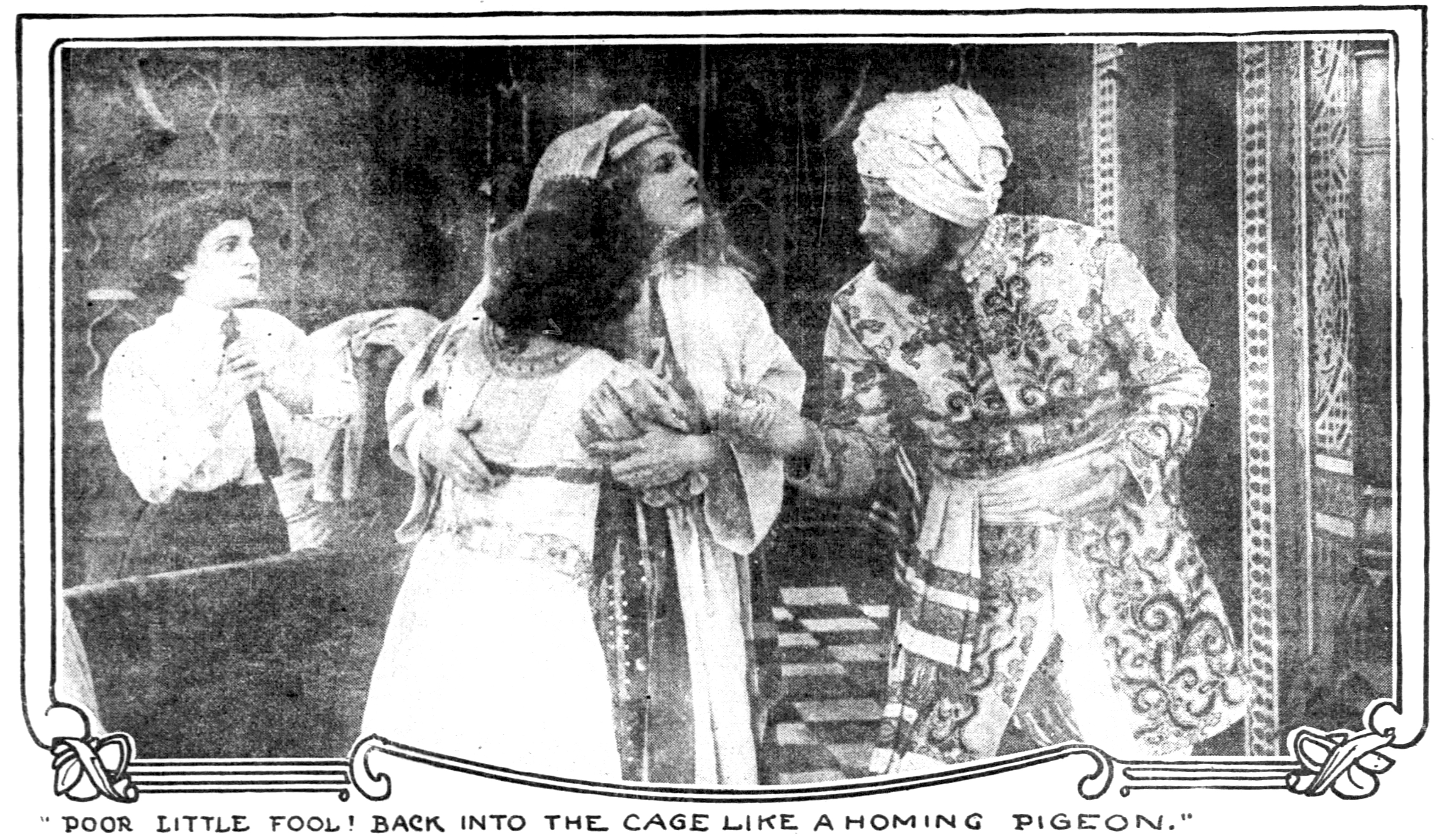 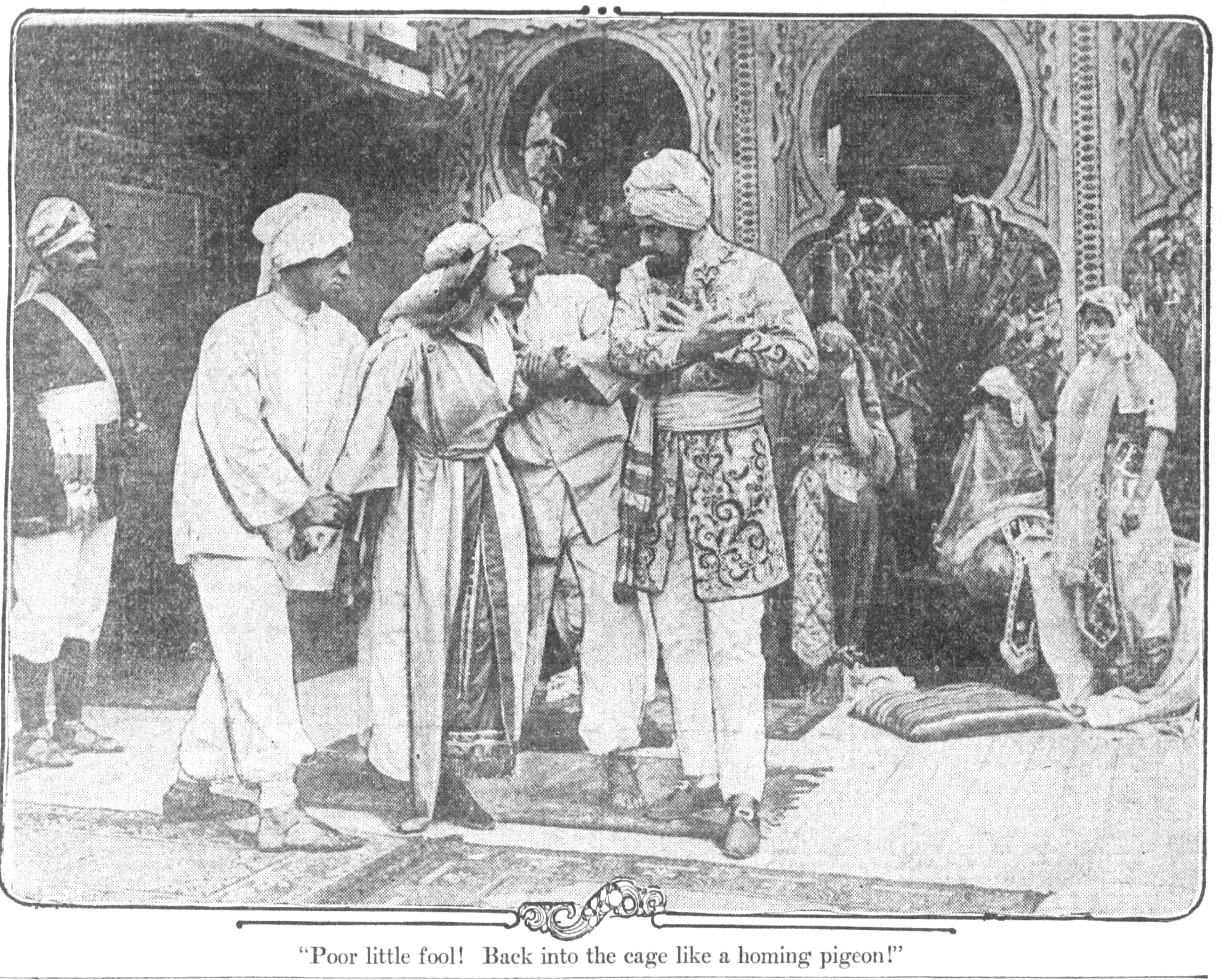 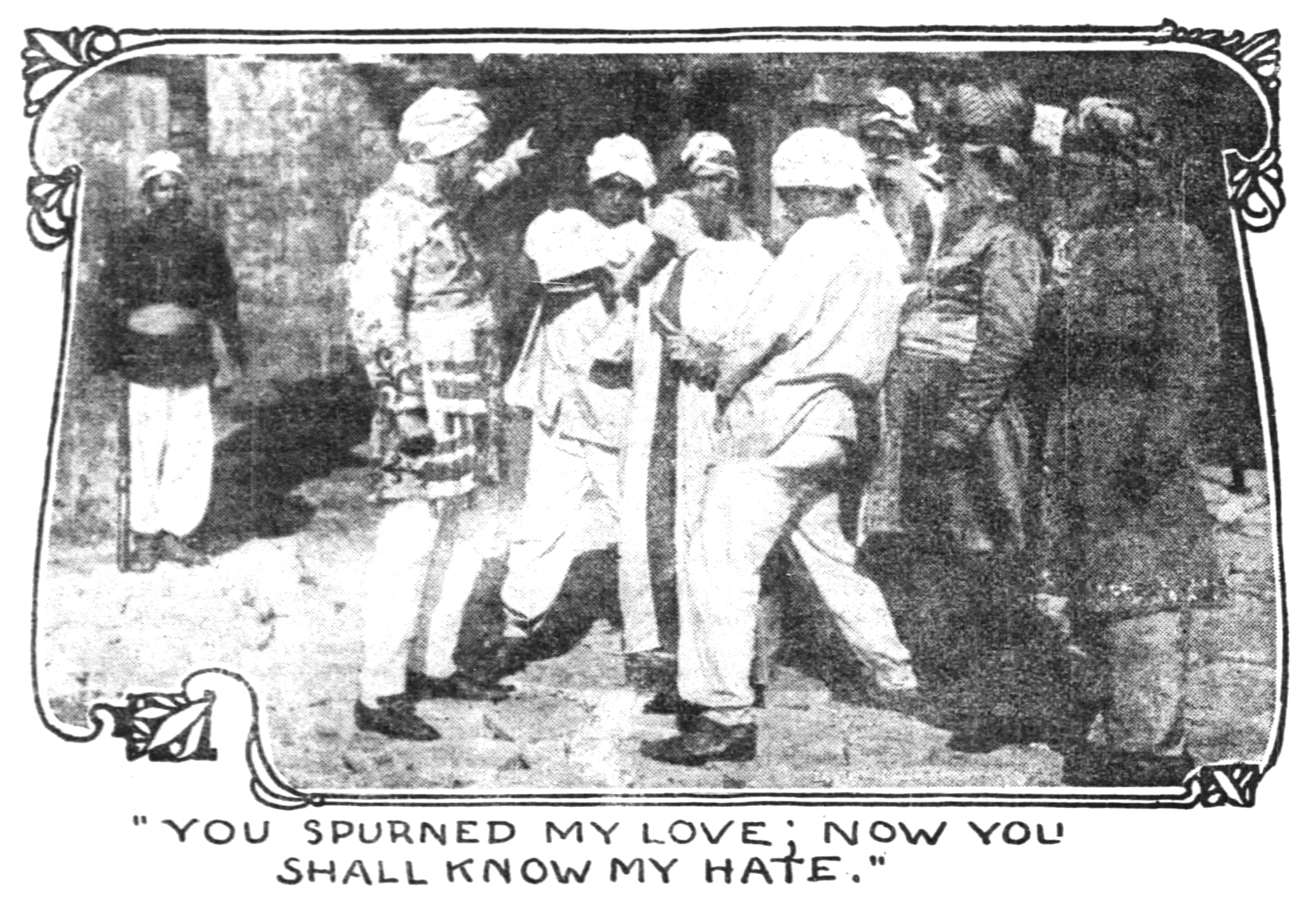 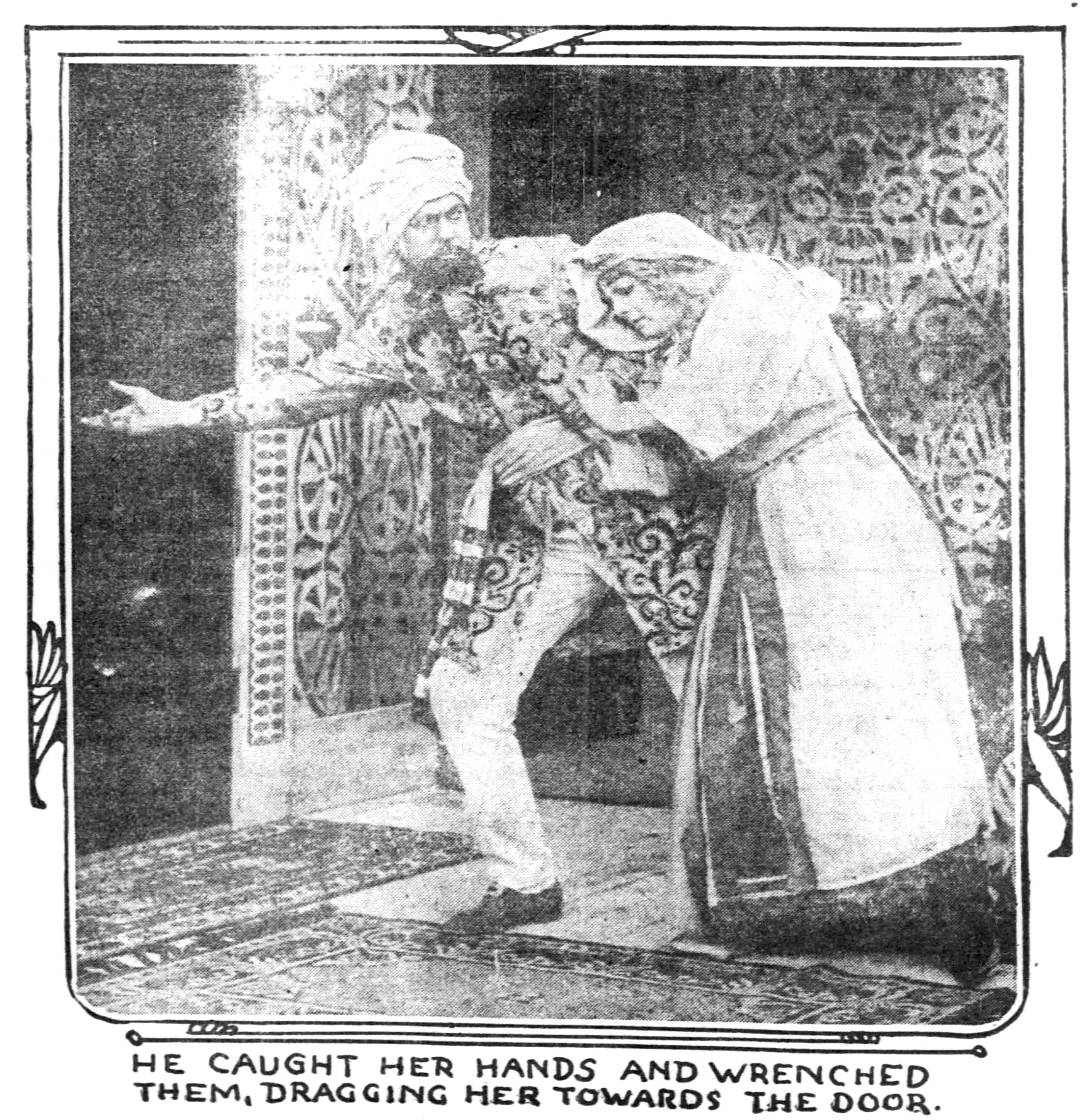 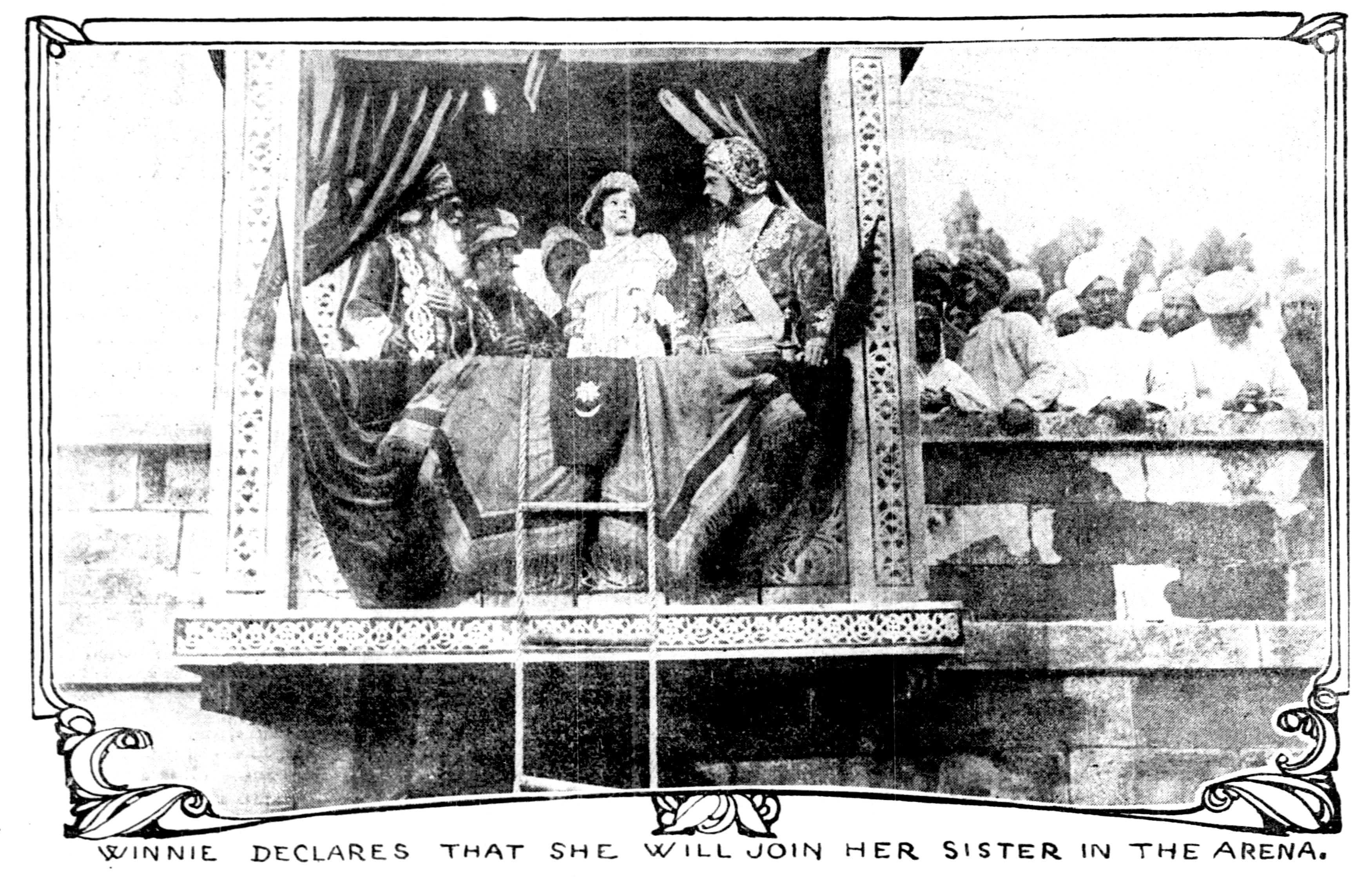 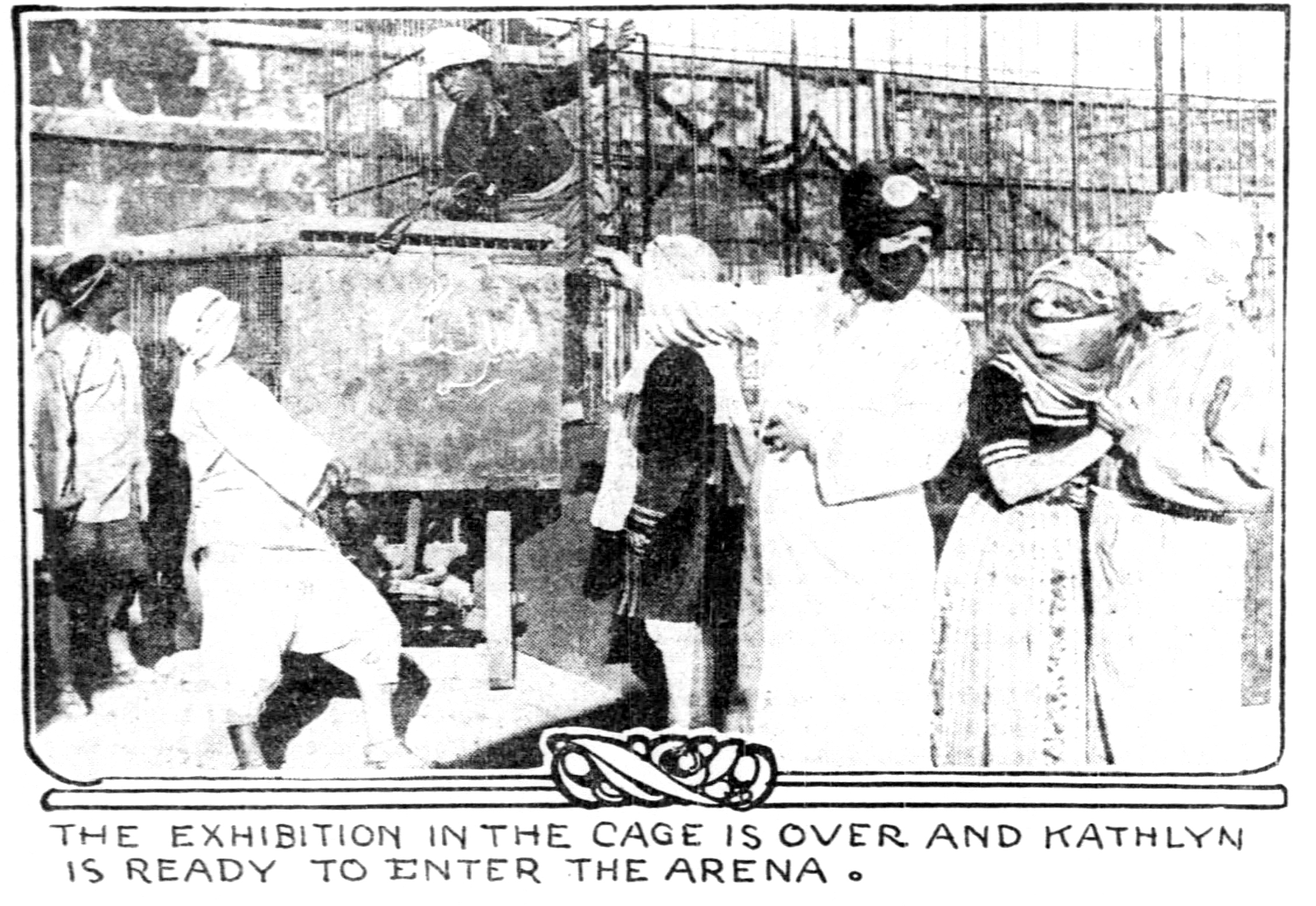 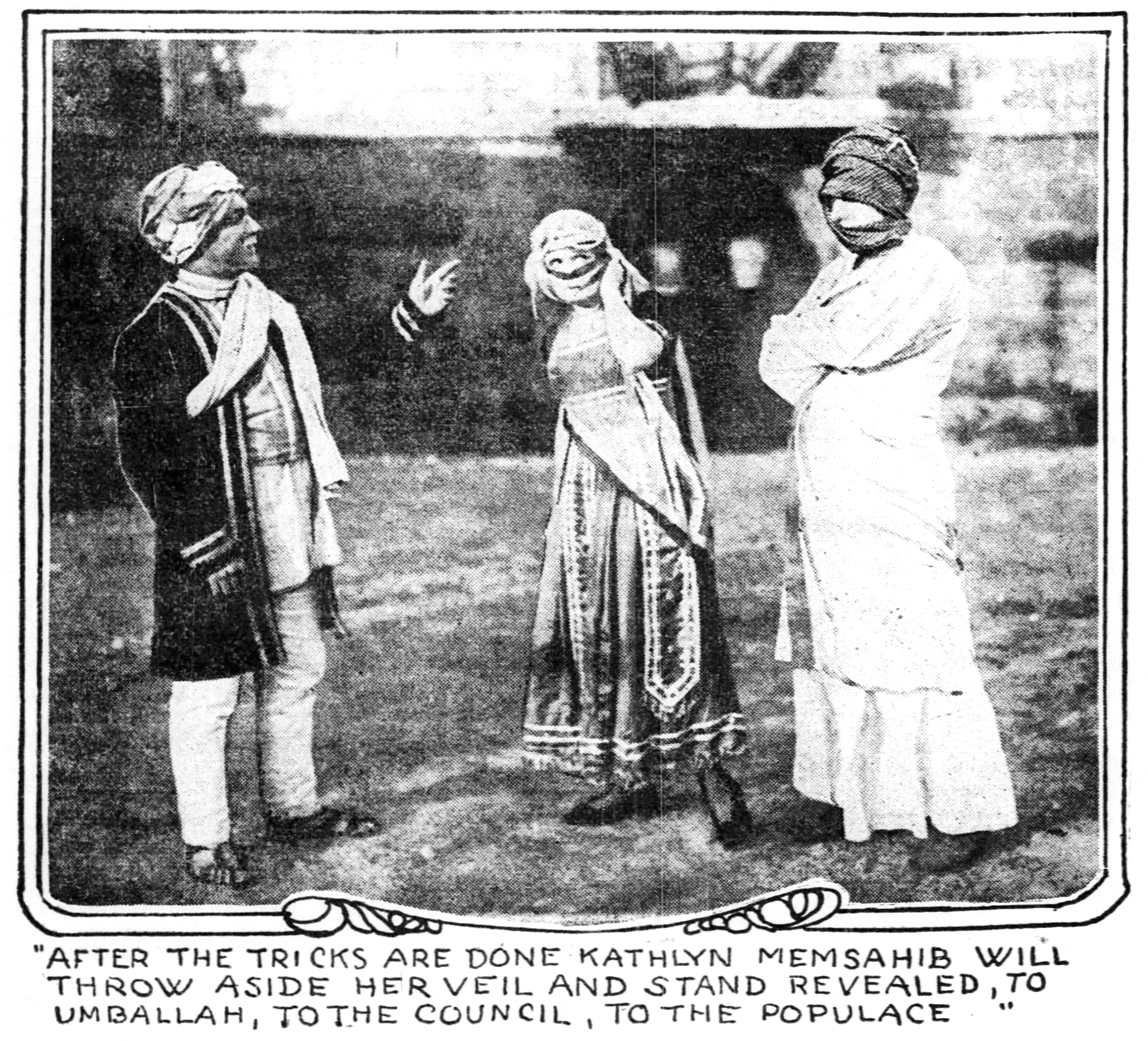 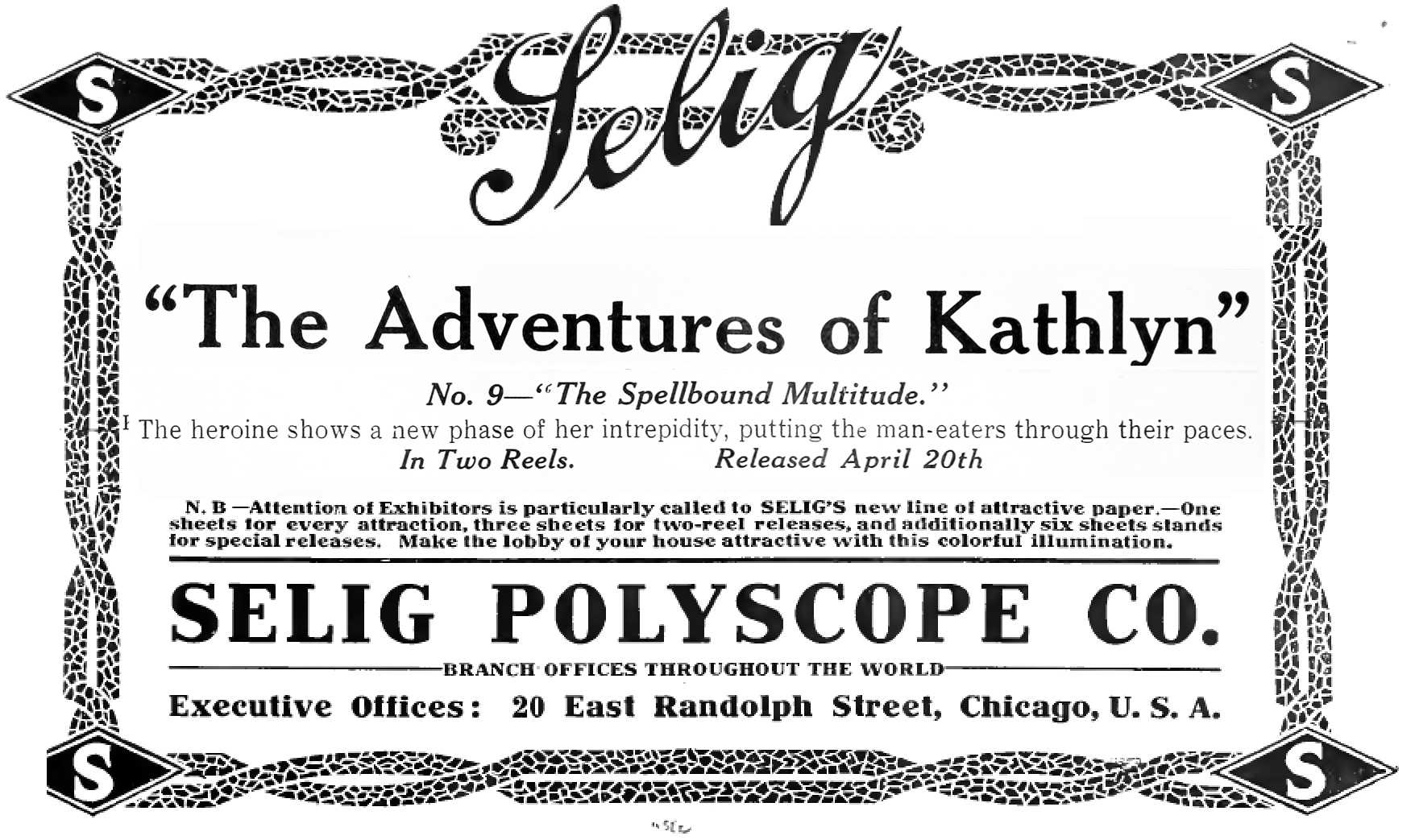 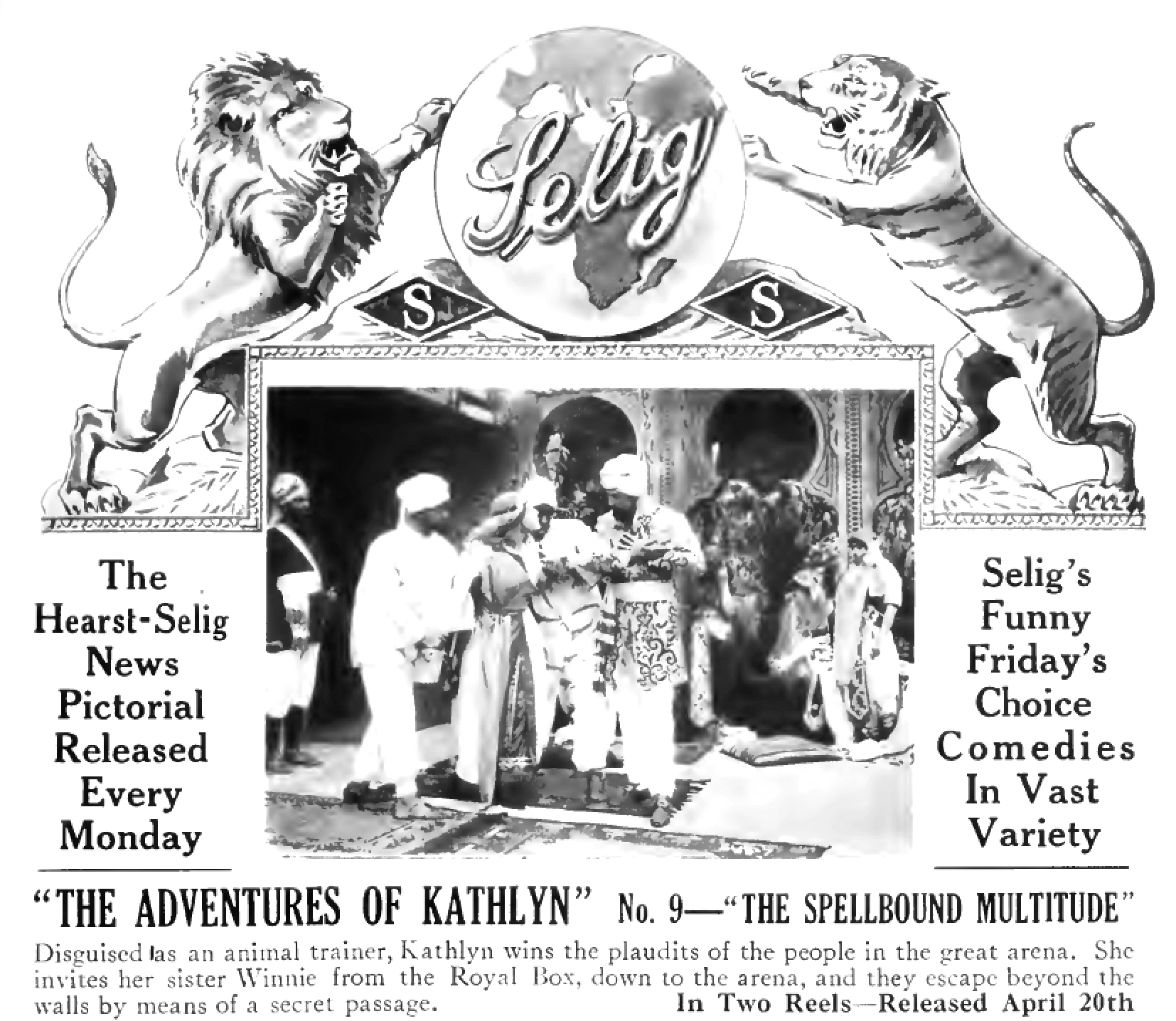