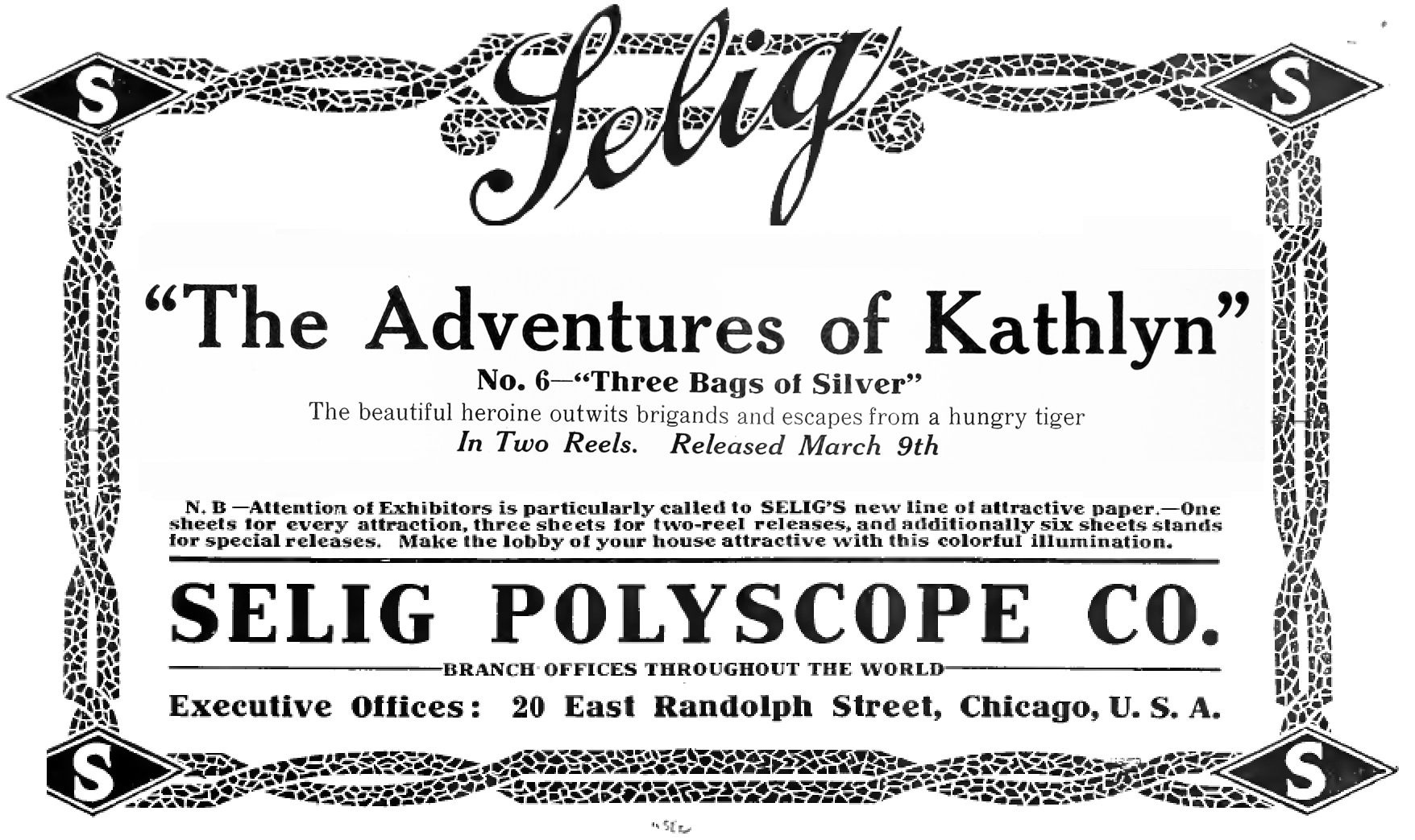 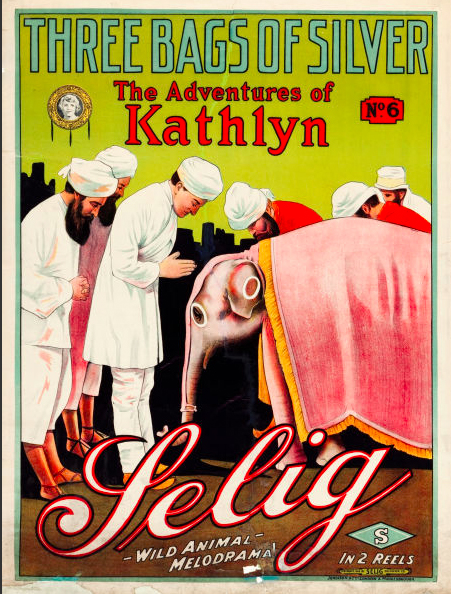 THE ADVENTURES OF KATHLYN, No. 6—Three
Bags of Silver (Mar. 9).—The chance-shot fired
hy the villainous but keen-sighted Umballah, makes
a bone-bruise upon the fair arm of Kathlyn. This,
however, does not stop her flight, or militate
against the escape of herself, her daring companion.
Bruce, and her father. Col. Hare, who escaped
from prison through the machinations of the clevfr
Pundita and met them at the appointed rendezvous;
before the vengeful Prince and his creatures starte’l
in pursuit. Fortunately, the escaping party is accompanied
by Ramabai and his faithful wife, Pundita,
who are now Kathlyn’s staunchest friends and
of incalculable assistance in every emergency.

Presently they emerge from the jungle and see
far out on the plains the white towers and shining
minarets standing silhouetted against the sky—Alhabad.
the walled city of the desert. They ap
proach the town and are received by sentinels at
the gates and are conducted into the presence of
the Rajah. This functionary, in addition to being
commander of the city, has a more important
office as keeper of the Sacred White Elephant,
which is frequently sent on pilgrimages to nearby cities to be worshipped by the natives. It is* one
of the precious possessions of the place—hence the
Tivalled city, and many savage guardians that look
after its chiefest treasure.

The Sacred Elephant is presumably returning from
a visitation where it has been the guest of ^nor.
when a fierce band of brigands that inhabit the
hills lying along the desert, decide to capture it
and convey it to a rival Maharajah across the distant
desert. Fortunately, the Sacred charge arrives
within the walled city before the brigands
attain its possession. They, however, are resourceful
and have other means at their command, , as
they know the attendants of the Elephant are
weary of their duties and will take to their favorite
dissipation of opium smoking. The brigands outside
the walls await their opportunity and when it
comes they knock down and bind the guards at the
gate, enter the Rajah’s premises and carry away
the precious animated object of worship.

About this time Kathlyn and her entourage arrive
in the city and the next morning are informed
by the commotion of the great loss. Bruce, through
Ramabai, is put in touch with the situation: likewise,
Katblyu, and they immediately offer assistance
if reciprocal aid is given in tbe form of a
military convo.v, which is readily granted. Kathlyn
Is rushed out into the desert on the back of a wild
camel, and from this gazeboo sweeps the horizon
with her binoculars. Following her is a large train
led by Bruce, together with tbe savage soldiery
picturesque in their Oriental accoutrements. Cleverly
disposing the force. Kathlyn and a few of her
followers go forward while the troops are concealed.
They meet the brigands and pretend to be friendly,
giving them quantities of opium as peace offerings.
Tbe brigands are disarmed by this kindness and
soon stupified into security through the influence
of the narcotic. As they are helpless, it is a comparatively
easy matter to get the Sacred Elephant.
On their way back to the walled city, tbey meet
Umballah, who has been reinforced for tbe pursuit:
but, his soldiers, in superstitious fear, bow before
the Sacred Elephant, so that Kathlyn and her party
are allowed to proceed on their way. It is some
time before Umballali, furious over the attitude
of his men. rallies them and induces them to move
forward. Wlien they arrive at the gates of the
walled city, they are denied entrance by the
soldiers of the Rajab. and Umballah returns sullenly
to Allaba in defeat. 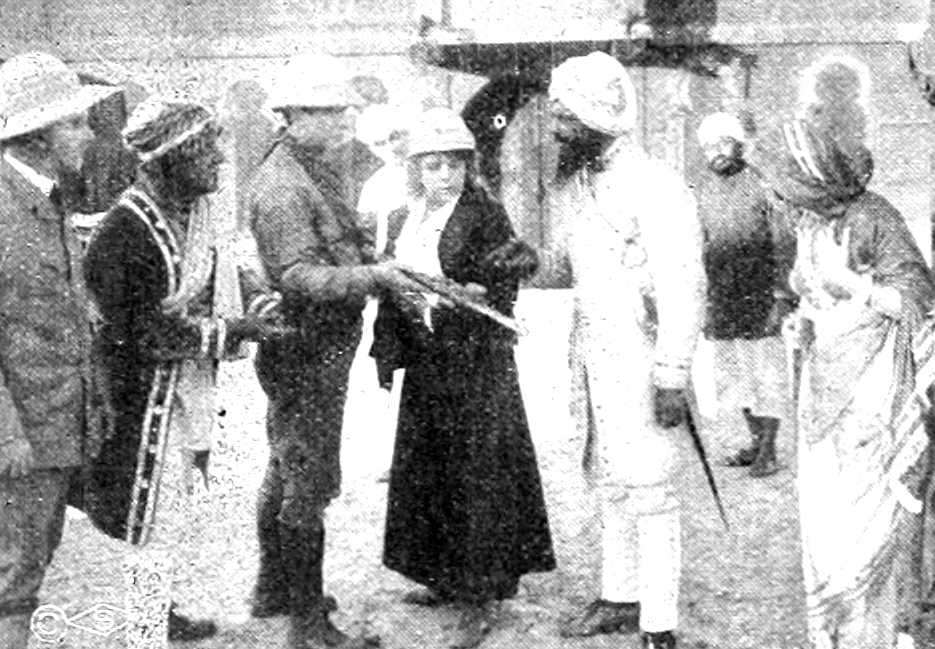 The following day Kathlyn and her party again
start on their way to the Coast, and, strangely
enough, are captured by the self-same band of
brigands from whom they secured tbe animated
sacred symbol. Kathlyn, her father and Bruce are
tied to a tiger cart of the brigands. The chief,
searching . Hare, finds his medal and knows
at once that he has captured the White King.
Thereupon he sends a messengar forward to Allaha,
demanding as a ransom from Umballah. three bags
of silver. A few days later Umballah arrives in
haste with his silver, but asks only for Col. Hare,
as a prisoner, earnestly requesting that Bruce and
Kathlyn be fed to the tigers. (To be continued.)