THE ADVENTURES OF KATHLYN—NO. 3—THE TEMPLE OF THE LION (Jan. 26).—
After the daring and cunning of the American engineer blew up the Amphitheater with his land mines, saving Kathlyn from the hungry lions, he dragged her from the wreckage to a secluded spot close by, where Ramabai and Pundita were waiting with elephant. So they all are elevated into the howdahs; the mahouts prod the big beasts and then follows a flight through the Jungle. Finally in the dawn of the morning, they stop for water. A baboon runs close to the trail, frightening Kathlyn’s elephant mount, which runs away. The mahout tries to stop the terrified beast, but he is thrown against a tree, and the elephant continues its frantic pace with Kathlyn. alone. The other members of the entourage pursue her: but the runaway gains so fast that Kathlyn is soon lost to their view in the recesses of the forest. Finally the weary elephant halts at the gates of a city, and Kathlyn again finds herself a stranger captive. She happens along about the time the funeral ceremony of a Parsee is being celebrated. The scene transfers to the Burning Gat, where a cremation is in process, after the primitive fashion of the Parsee. The widow is led to the pyre to be sacrificed with her husband for suttee. She shrieks with fear, declaring she will never give herself to the rite. The head man then shouts to them that a victim is providentially at hand to be sacrificed upon the pyre to propitiate the gods. Thereupon he leads in Kathlyn, the white captive. She is bound and placed upon the smoking pile. The preparations are made for her final resignation—but she does not resign. As the fire is started, the natives start to decorously retire, their flight being accelerated by the appearance of a mad elephant. It happens to be Kathlyn’s erratic mount. It recognizes its mistress and, reaching up to the top of the pyre, takes her from the flames that are now biting her garments. As the big beast rescues the fair one and rushes away, the scene dims. 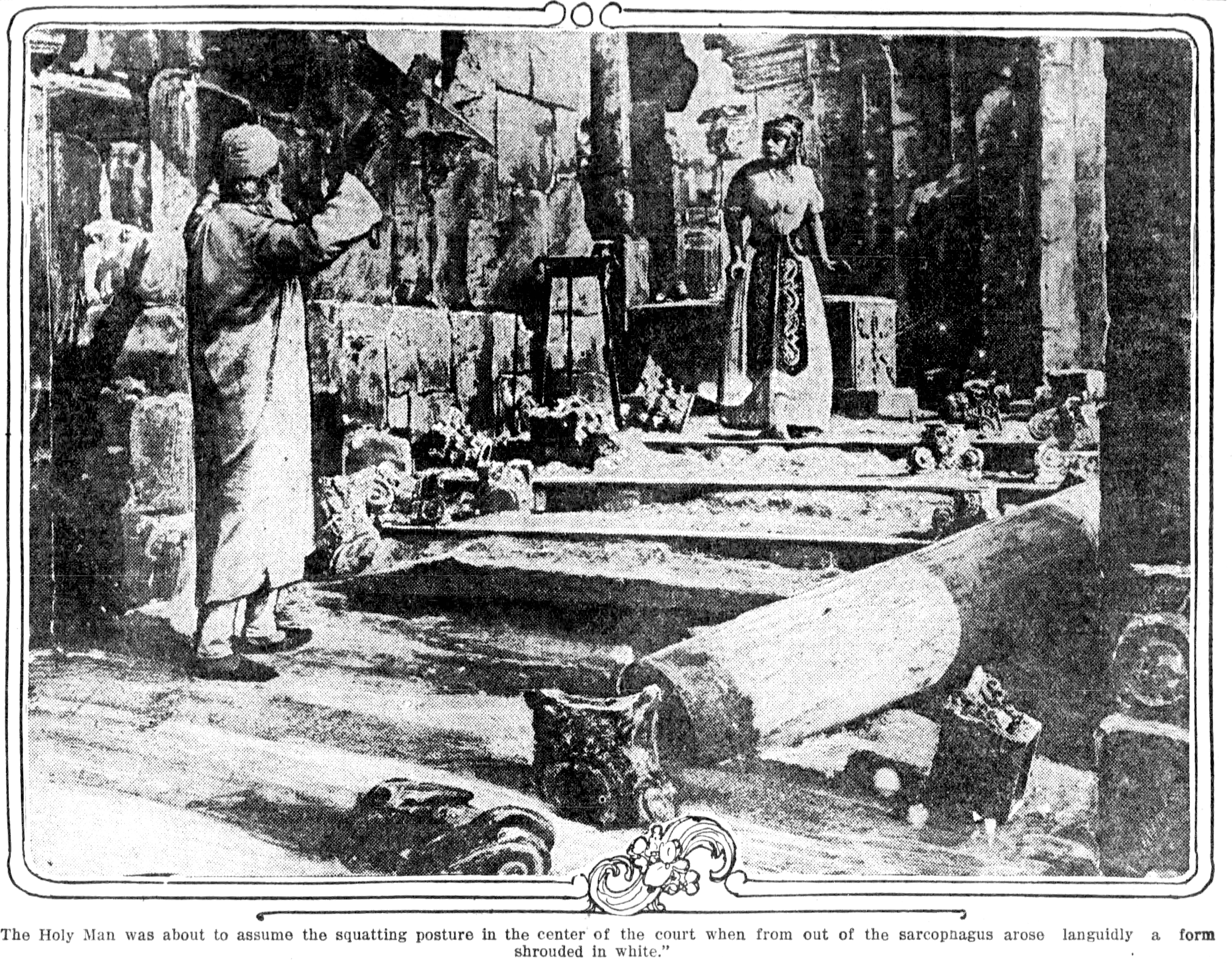 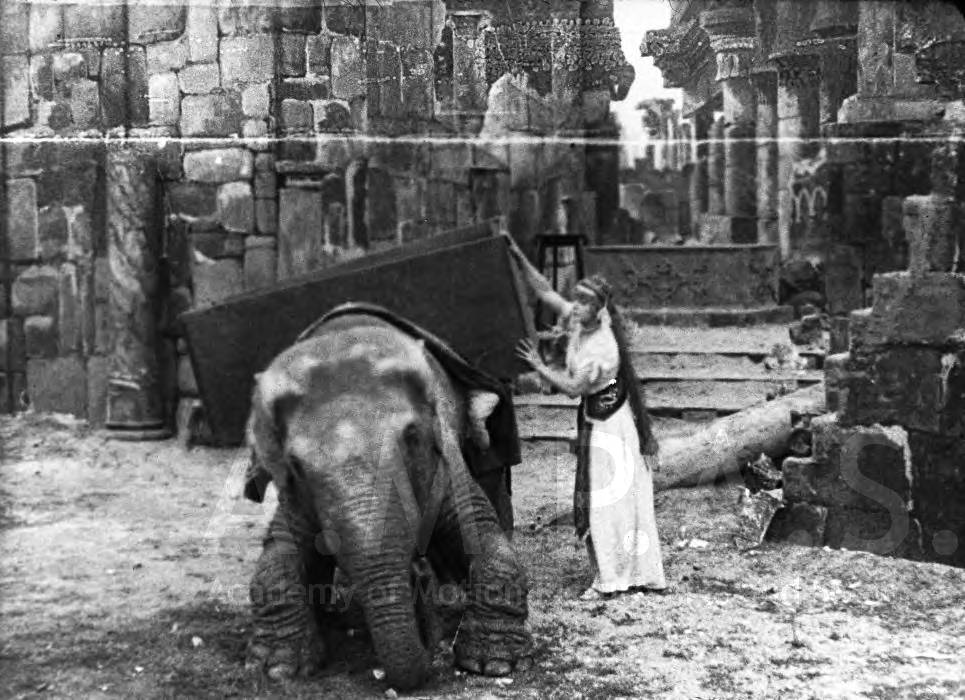 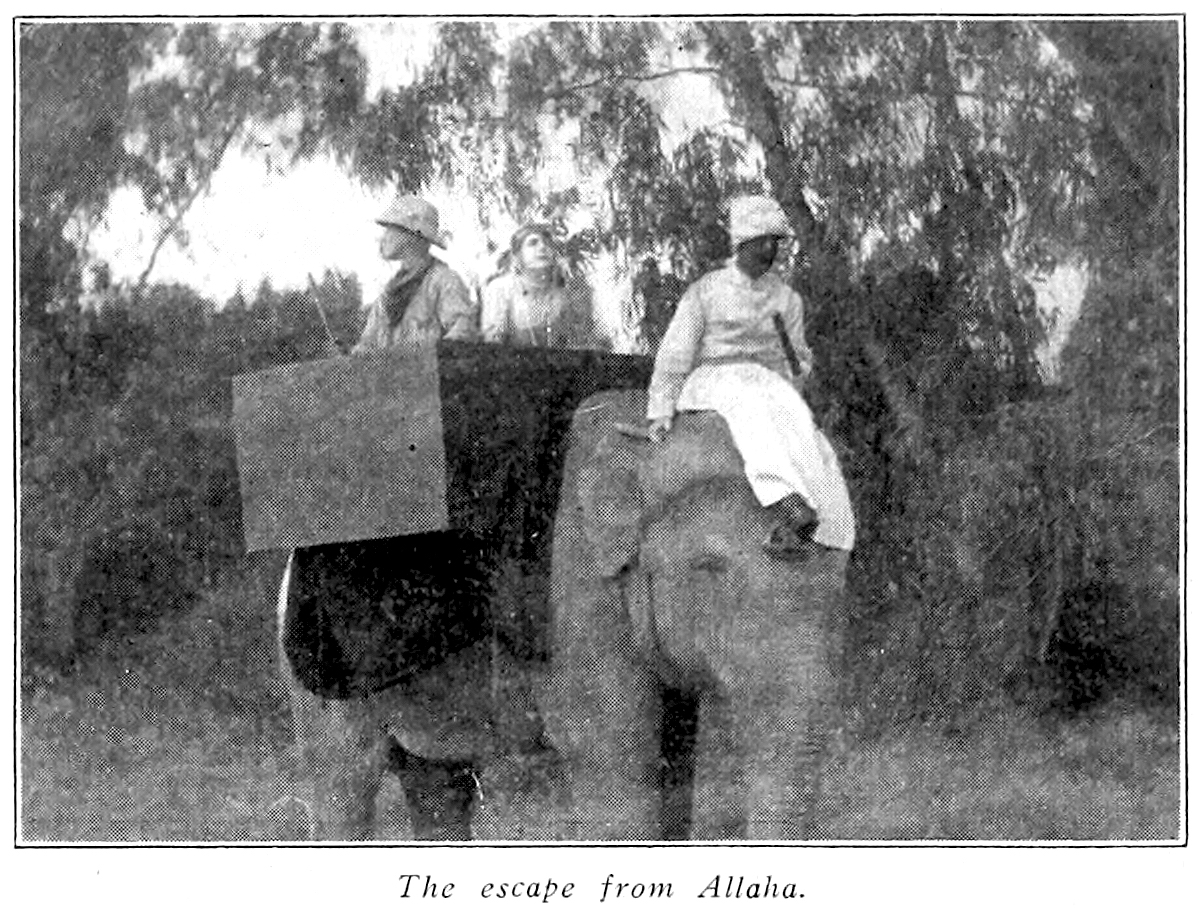 The day is far spent : likewise the elephant, and as night comes on. they approach the portico of a ruined temple. The animal kneels and Kathlyn descends, weary from the long journey. Across the pillared portico strolls a prowling lion. Other parts of the structure show that the carnivors are chiefly its habitants.vKathlyn alights and stands close to the sarcophagus. She observes the lion and leaps into the carved cavity. So she passes the night in terror, frequently seeking safety in the recesses of the ancient tomb as the black maned lion passes and re-passes in search of prey. 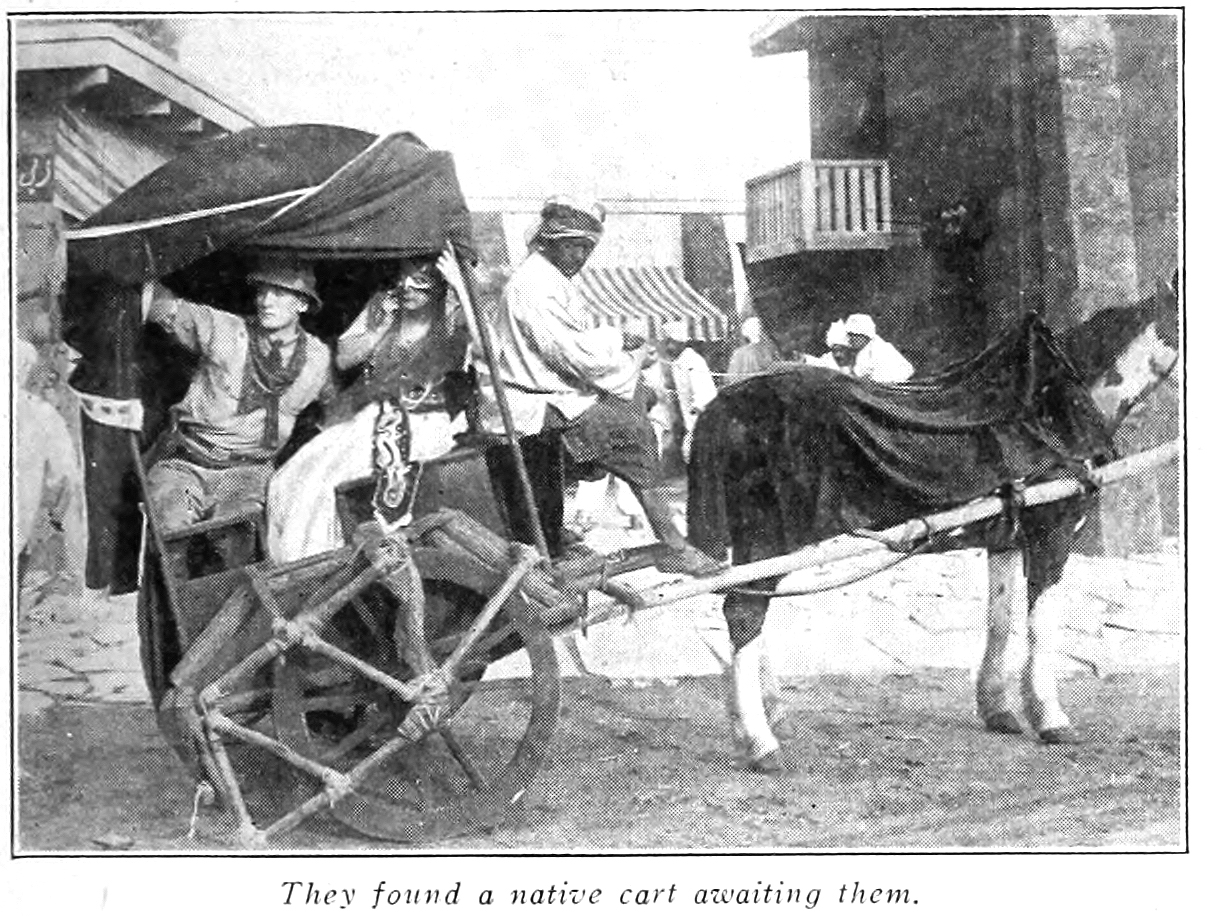 As morning comes, a priest ventures into the temple, and observing Kathlyn miraculously rising from the sarcophagus after her terrible rest, he views her as an apparition, and falls at her feet in worship. He calls his associates—they bring her food and drink and elect her to be high priestess in their temple: and henceforth she must keep alive by night and day the fire that will ward off evil spirits from that region. The unhappy young queen again finds herself not only a priestess, but a prisoner. One night in fleeing from the prowling lion she stumbles against an idol—it falls and is broken into a thousand pieces. The following morning the natives, discovering the destruction, are enraged beyond endurance, rushing at Kathlyn as if to slay her. She wards them off, reminding them that as high priestess her person is sacred. Then fortunately recurs to her the accomplishment of her girlhood days with clay modeling in her far away California studio. She plans to save herself from the fury of the fanatics by telling them that she has the power to recreate their idol. She orders clay and water and at once begins modeling a reproduction o the idol from memory. When the natives behold this completed work of art. they fall to the ground in abject obesiesance and she stands intrenched more strongly than ever in their reverence. Thus she again saves her life by her ready with and her facility of accomplishment.

The marauding lion has grown bolder and hungrier and now makes his rounds on the portico in broad daylight. Having escaped the fury of the mob. Kathlyn now is about to become the prey of a savage beast. She flies for her life from the temple to the river. It would appear that only a miracle could save her now. 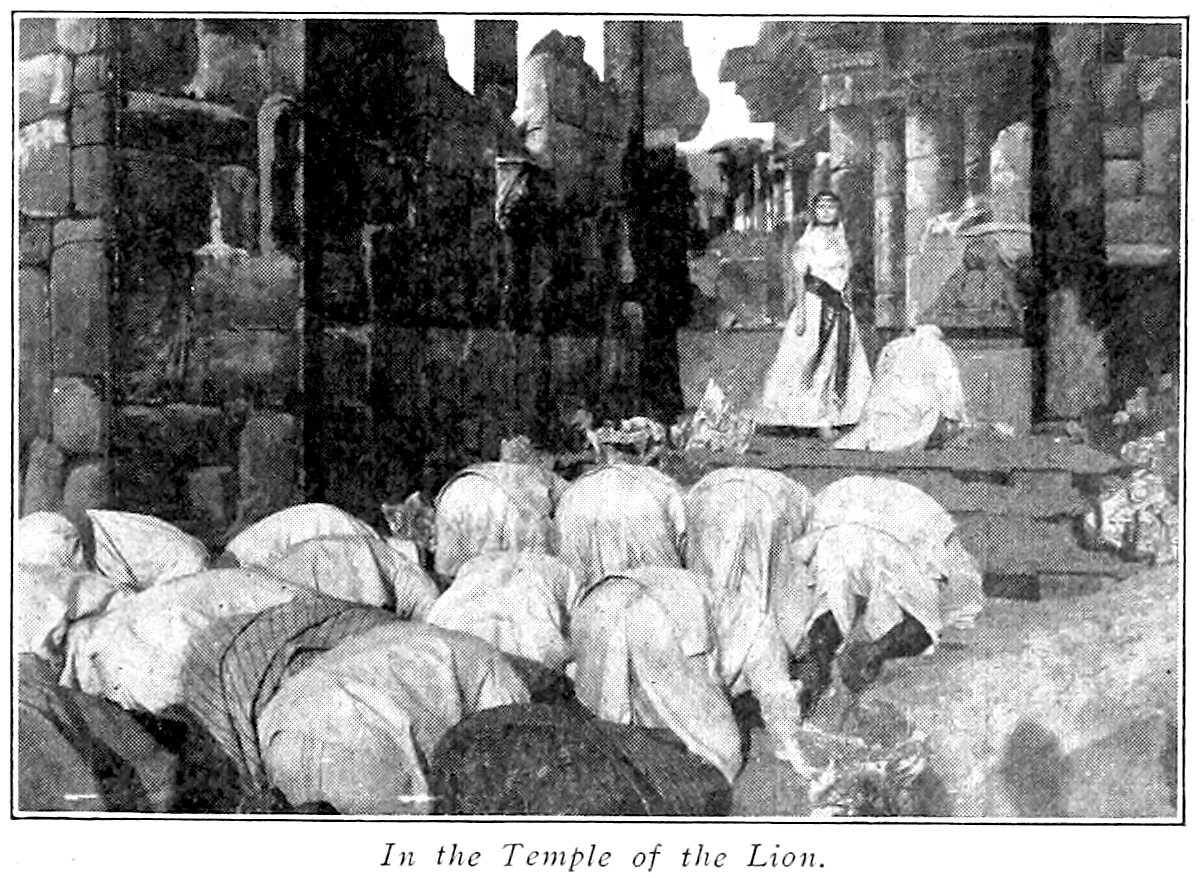 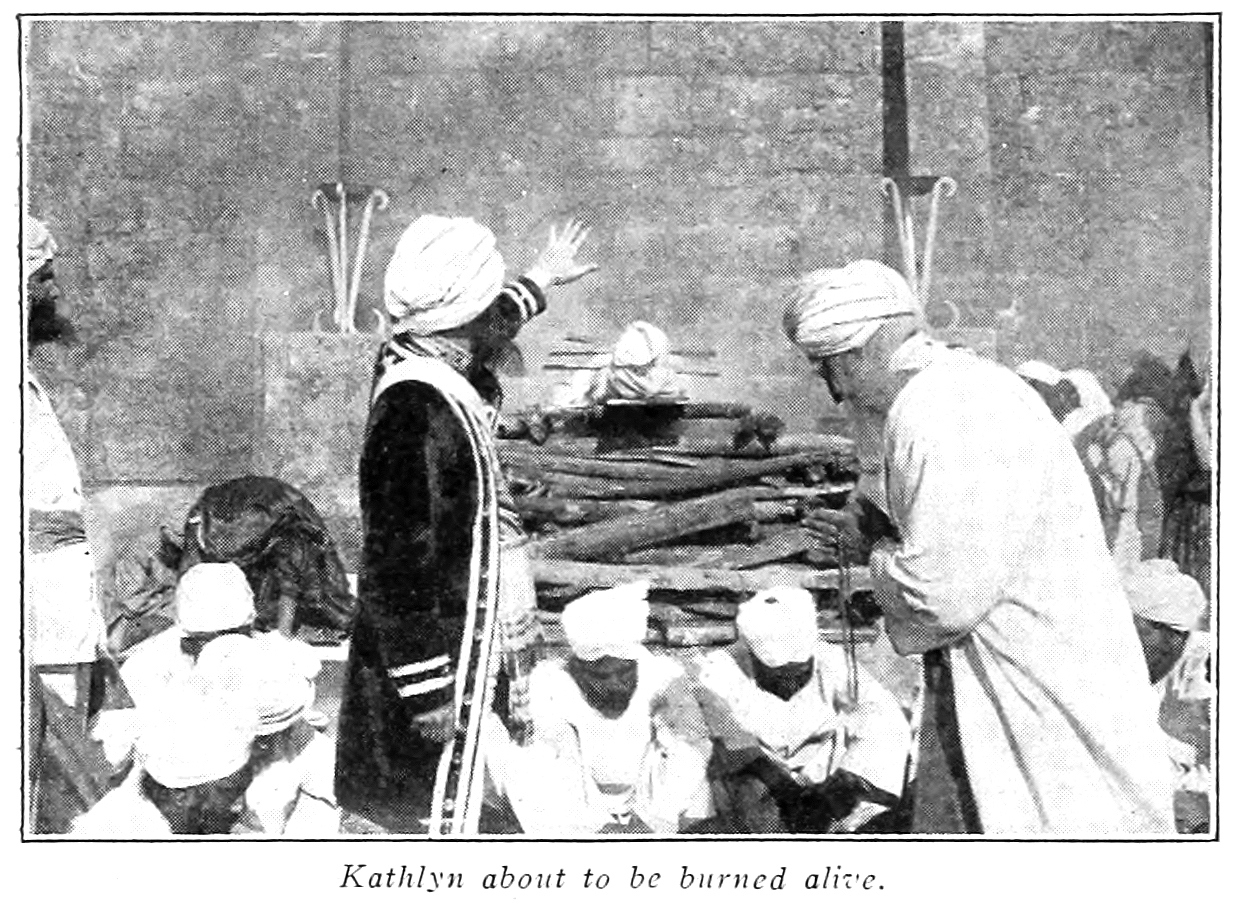 THE remarkable series of photodramas under the title. “The Adventures of Kathlyn,” is based on Harold MacGrath’s fictional work of that name, the photodramatic adaptation being made by Gilson Willets, also a well-known author and literary man. The entire series forms a serial story in thirteen sets. The first set. already released, thirteen took up three reels, making twenty-seven reels in all. The sets will be released so that two weeks will intervene between any one and that immediately following, thus requiring twenty-six weeks for the showing of the entire series.

These films mark not only a new departure in production and in the method of treating a prolonged subject, but they will also establish a new standard for all who follow, in the domain of perilous adventure and thrilling photodramatic narrative. One thrill succeeds another so rapidly that the spectator is out of breath, mentally, in trying to keep abreast of them: and the atmosphere of Orientalism that prevails throughout adds a feeling of mysticism that reminds one of the days long ago, when the Arabian transported us into a new heaven and a new earth.

Director F. J. Grandon has brought himself into the lime-light by the art and skill shown in the action and settings of these photodramas. His task was arduous at all times, for the scenario demands the performance of big things and nice attention to detail. Massive exteriors and interiors, impressive spectacles and weird, grim ruins bear witness to this. The hoary, mouldering Parsee temple, with its lone, prowling lion, has a haunting influence on one’s mind. The harem scene is finely set. The imposing durbar scene; the great concourse of people, as they assemble to hear the final decision of the Council of Three on the fate of Allaha’s unwilling queen the fete-day scene, and the arena, where she confronts a host of hungry lions, and her rescue from the burning pyre by the pon- derous elephant are some of the other striking spectacular fea- tures of sets number two and three.

In all these, Miss Kathlyn Williams, as the queen of Allaha, is the great compelling figure on which every eye is centered. She is the mainspring of the action and of interest; and she is so continuously beset by dangers and seemingly insurmountable odds that one unconsciously commiserates her on her fancied woes. But some of the dangers are not at all fanciful. It takes a stout heart and a fearless spirit to stand alone before twenty lions or more, not one of which is the proverbial circus lion “all gums and no teeth.” Miss Williams is fairly bewitching through it all. I don’t think I havever seen her in pictures to finer advantage. She is always equal to the demands of the occa- sion, and is always ready for other exploits.

Other principals in sets two and three are Charles Clary, as Prince Umballah ; William Carpenter, as Ramabai; Thomas Santschi, as Bruce Cthe .American hunter) ; Miss Goldie Cold- well, as Pundita, and Hurri Tsingh (a native Hindoo), as the high priest. All are to be commended for excellent acting, costuming and make-up. 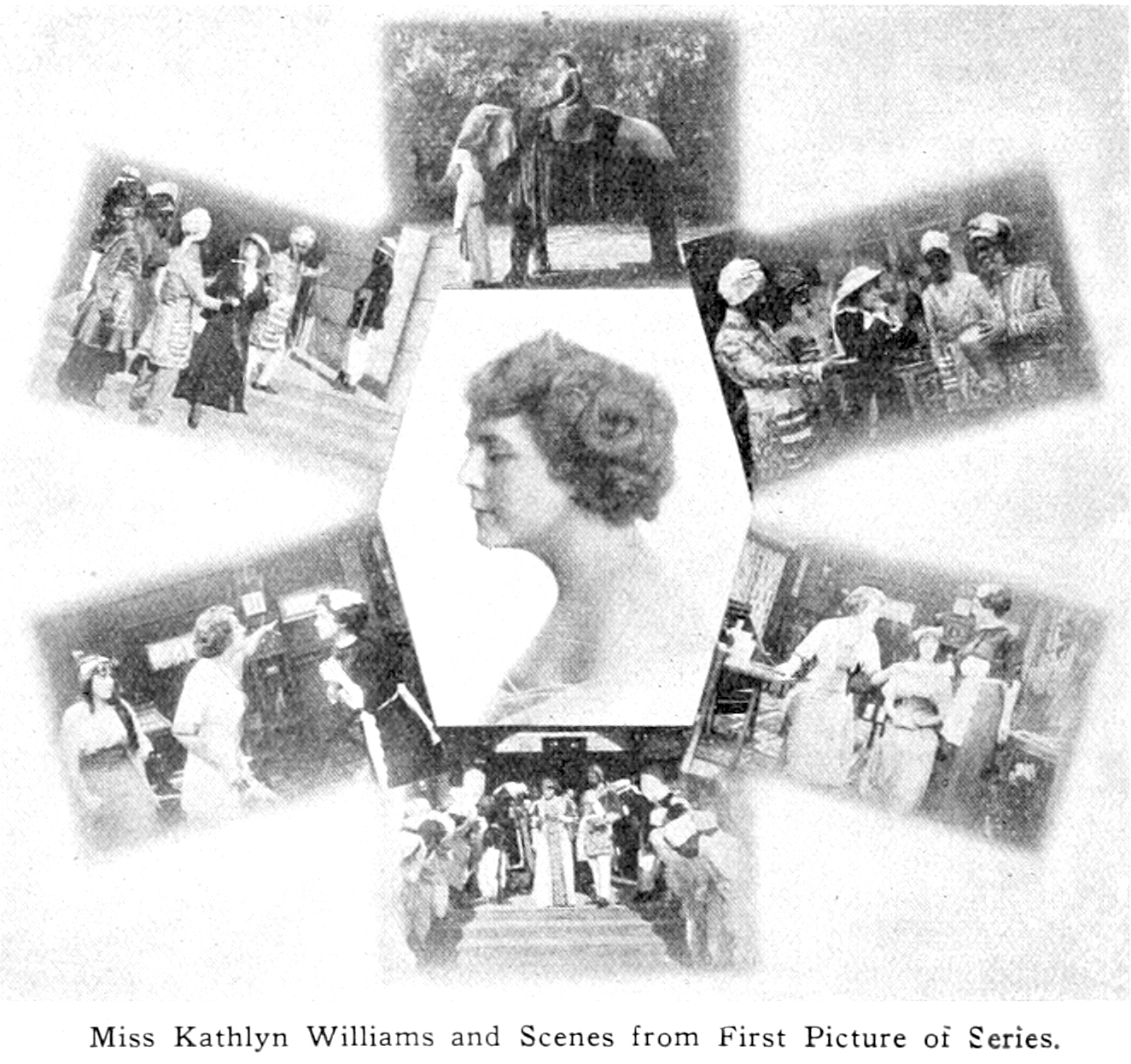 The opening scene of set number two shows the durbar, where the Council of Three decides that Kathlyn, on her refusal to become the wife of Umballah, shall be given a week’s respite.

During the week she rescues Ramabai from a false charge of murder made by Umballah and also frees his wife. Pundita, appointing the latter her lady-in-waiting, and Ramabai captain of her bodyguard. At the same time Bruce, an American hunter of big game, arrives in Allaha and proves a timely factor in the fortunes of Kathlyn.

Still refusing to wed Umballah, at the end of the fateful week, the Council of Three decrees that Kathlyn must undergo two will entitle her to remain a maiden queen. The first required that Kathlyn should be human bait on a leopard’s trap; the second that she should be cast into the arena with hungry lions. She escapes in both instances by the aid of Bruce, whose aid has been secured by Pundita. In the second test Bruce blows up the great arena by a hidden mine of powder, which he had placed there. The final scene in set number two shows Bruce rescuing Kathlyn from the arena.

Number three continues the rescue, showing Kathlyn and Bruce fleeing through the forest on the backs of two elephants. Kathlyn’s mount takes fright at a baboon, just as Bruce had alighted from his beast to secure water. The frightened animal easily outdistanced that ridden by Bruce and carried Kathlyn to a town in a neighboring state, where she was immediately recognized by a high official and arrested. This official condemned her to die on a funeral pyre, on the ground that she had broken the laws of her own state by refusing to wed Umballah. Just in the nick of time she is saved by the arrival of her elephant, which had heard her cries.

The elephant traveled all day. and at nightfall stopped at the ruins of a great temple. There Kathlyn dismounted and sought refuge in the ruins for the night. A huge lion, which made the temple his home, approached her, but she escaped by hiding in a great sarcophagus. In the morning she was discovered by the high priest of the temple, who worshipped her as the high priestess. Food was brought her and she was appointed to keep the sacred fire burning day and night. The closing scene in number three shows Kathlyn fleeing for her life from the lion of the temple. 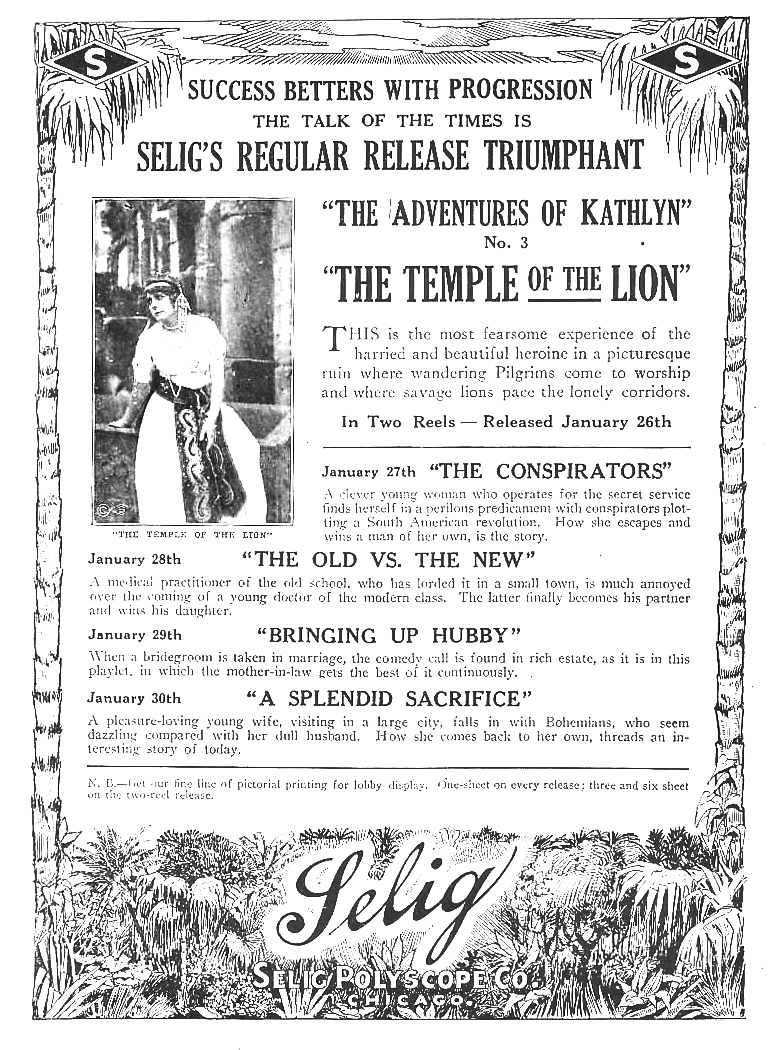 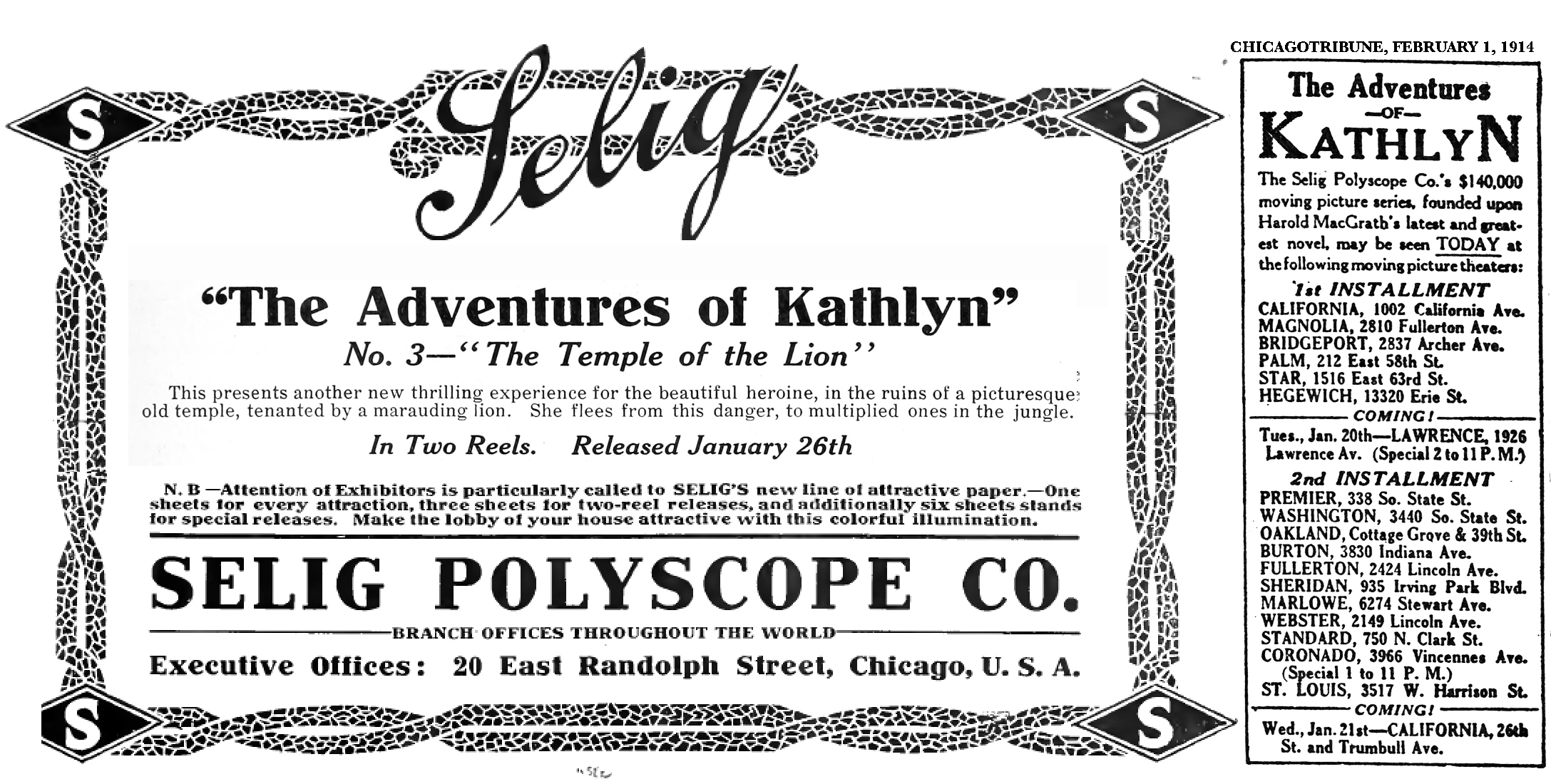