Kathlyn and her party, having escaped a dreadful death from the rain of fiery lava, and the great rocks that fly and darken the air with the eruption from a volcano, observe its subsidence with profound gratitude. They have had so many miraculous escapes that this finale, a seismic disturbance which is the crowning one, has singular value in a sensational way, in proving a visual motographic triumph. They remain in the shelter of the cliff until the eruption ceases, and then escaping the burning streams of lava, move resolutely on to find the treasure trove. Unfortunately, Kathlyn has lost the data, which necessitates a hunt requiring valuable time. However, they finally come into the cave, and learn from the native who was badly wounded by Umballah, that they have arrived too late, as that arch villain has decamped with the treasure. The dangers that infest the island, the fruitlessness of their search, inspire them to get away from the place of death and destruction as quickly as possible. On the seashore, Kathlyn sweeps the horizon with her powerful binoculars, and sees Umballah’s boat almost hull down in the dim distance. He has a great advantage in start, but they take up the chase unfalteringly.

When Umballah reaches his native heath, his first precaution is to rush to the chief boatman’s hut, where he hopes to temporarily cache his gold, but this worthy man, recalling the great service of Bruce and Kathlyn in saving the lives of himself and his child, refuses to aid the intruder. Umballah is instantly furious, knocks the man down and hurries away to a nearby jungle, which happens to be the lair of leopards. He is unaware of this, but before he has time to hide his gold, the leopards return and Umballah with his followers fly for their lives, leaving the treasure. Kathlyn and her party, having landed and been informed of the situation by the faithful boatman, invade the jungle, find the deserted gold, which they place in the panniers on their mounts and take to their own camp.

Umballah and his natives presently regain courage, and returning to bury their gold, find it has been taken. He immediately surmises that Kathlyn and Bruce are in the neighborhood and instructs the natives to search the village for firearms and appealing to race hatred, to “take back the gold from the white devils who had robbed him.” The natives secure rifles and ammunition and surprise the camp of Kathlyn and her party. Umballah, at the point of his rifle, forces Kathlyn and her father to mount horses and commands his natives to take Bruce and the others to the boatman’s hut and hold them prisoners. Bruce and Ramabai, a little later escape from the natives, return to the camp where the gold has been hidden, unearth it and proceed to Allaha to give it up to the Supreme Tribunal.

Umballah, with devilish malignity, manages to get his prisoners incarcerated in the Court of Death, with the purpose of torturing them, and then feeding Kathlyn to the lions. In the interim Bruce and his companions have reached the court of the Supreme Tribunal and proffered the dignitaries the great treasure they have found, but they refuse to accept the gold until Kathlyn has been found. This stirs Bruce to unusual activity. He impresses a number of soldiers outside the Royal Guard, and starts an extensive search. They bring to him a slave who is crawling painfully on the earth, having been bastinadoed by Umballah until his feet are cut to pieces. He informs them where Kathlyn and her father are detained just about the time Umballah has arranged to free the lions in the arena. Ramabai climbs upon the balcony of the Court of Death, and has there a spirited personal encounter with Umballah, who finally disarms him and drags him into his private chamber.

Bruce hurries around to the enclosure, having rescued Kathlyn, who implores him to save Ramabai. He enters the house just in time to save that worthy from being stabbed by one of Umballah’s slaves. The master villain, Umballah, is finally captured and returned in bonds to the treadmill, where he is destined to work out his days. Kathlyn gives the gold to the poor and is freed forever from the throne by the Supreme Tribunal. A week later, accompanied by her father, her sister and the faithful Bruce, they reach the coast and set sail for their beloved California, where Kathlyn’s marriage to Bruce is assured. Thus culminates this singular series of adventures, that have proved an “open sesame” to a new interest for the world in moving pictures.
(The End.) 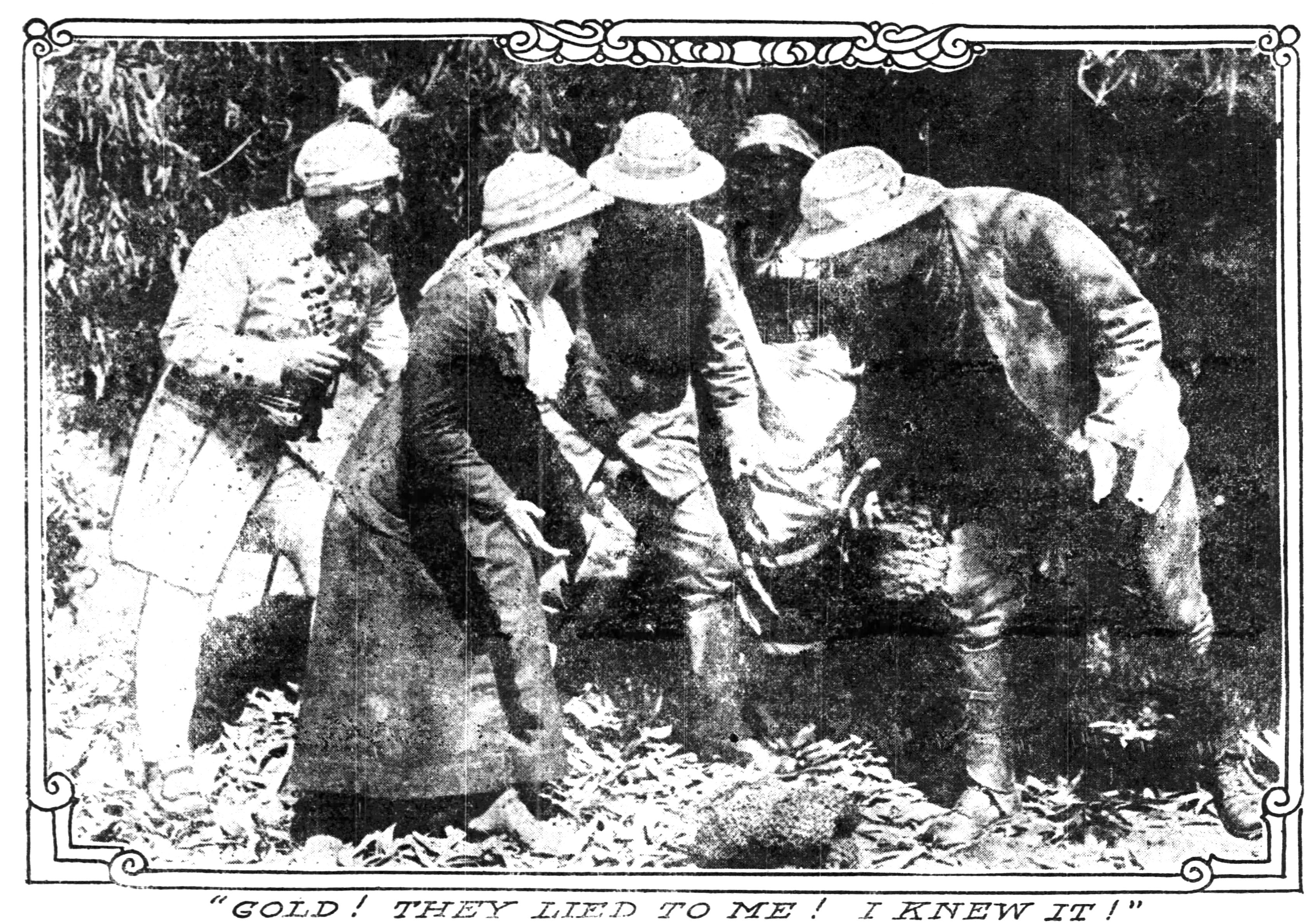 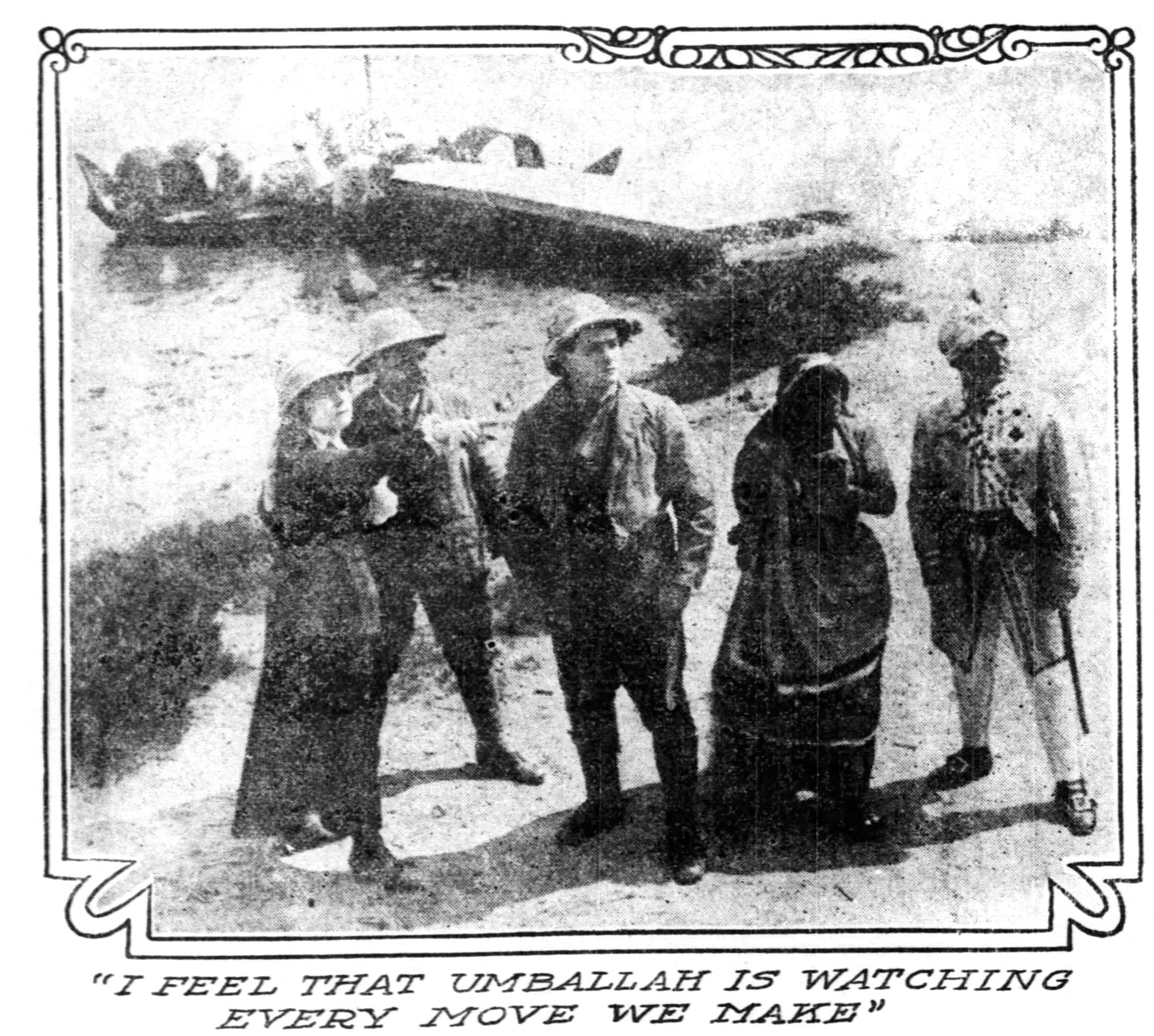 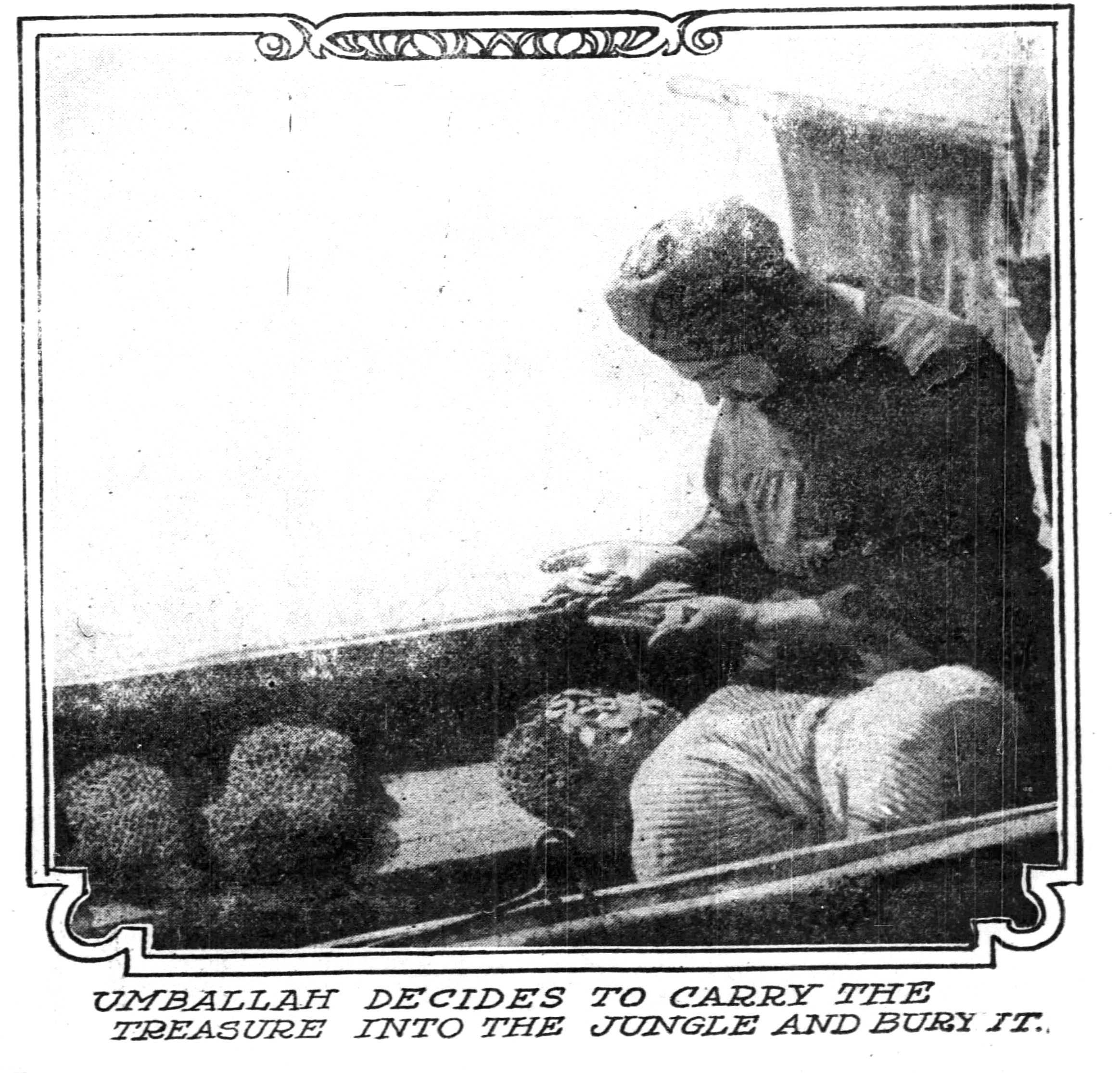 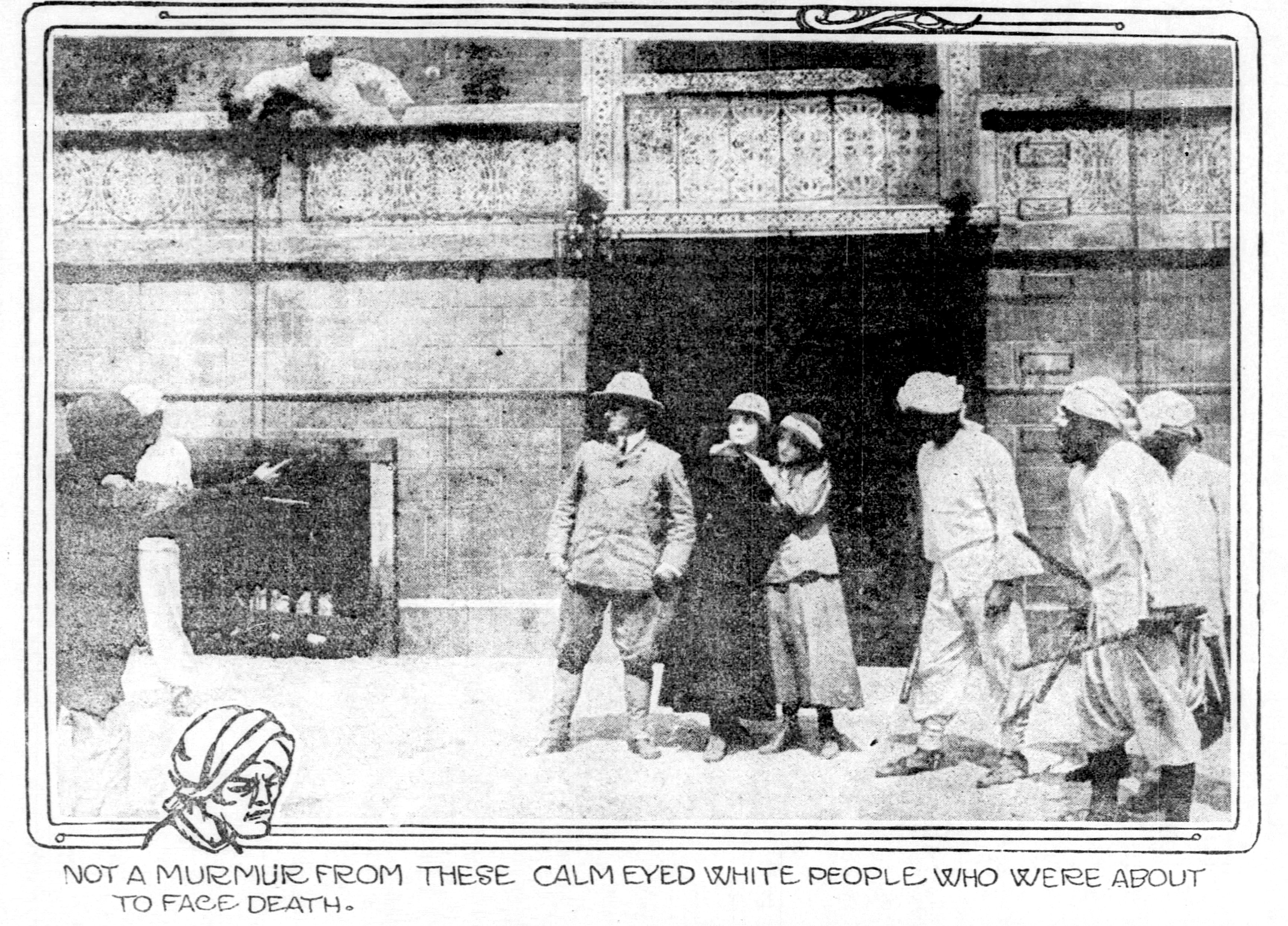 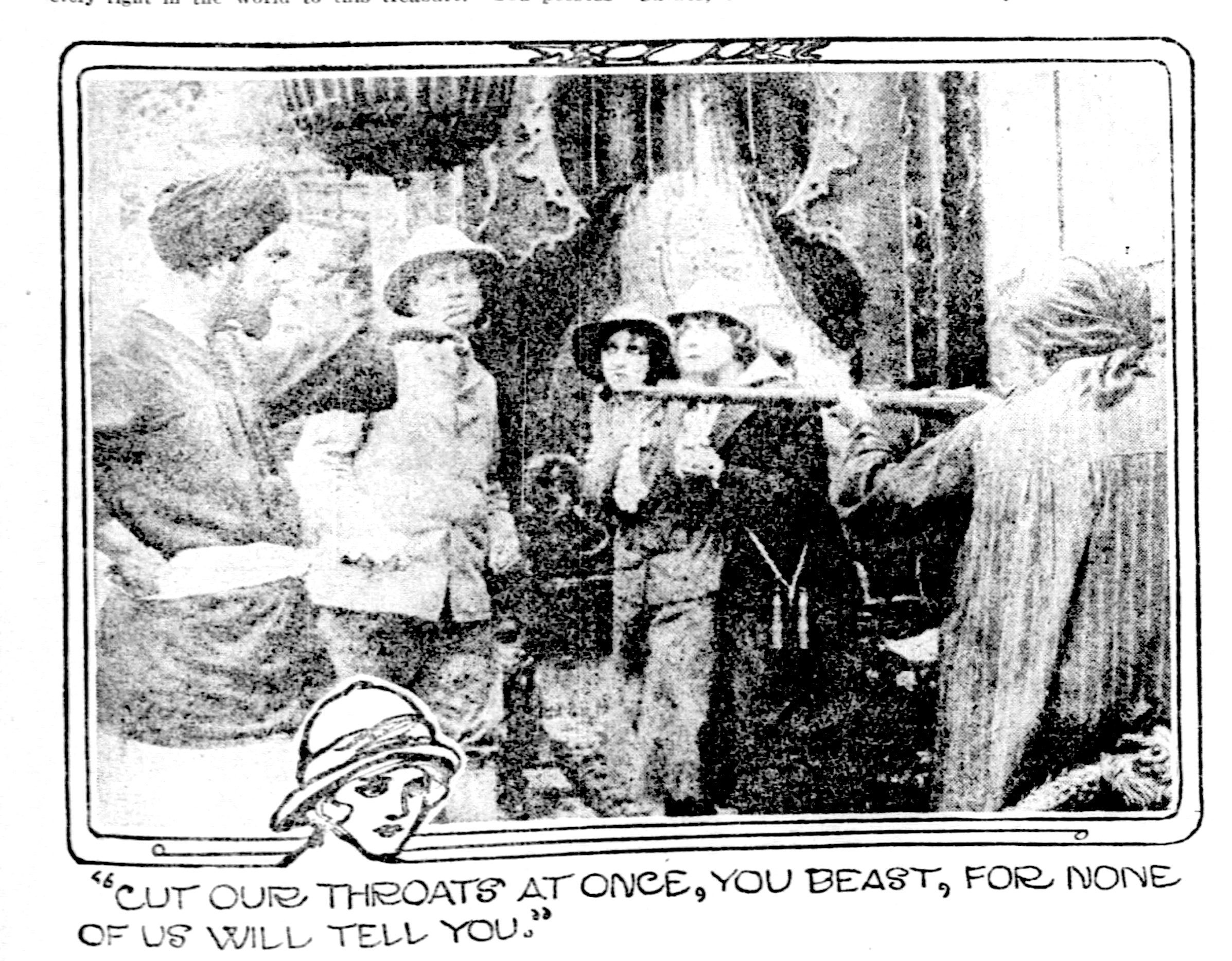