THE ADVENTURES OF KATHLYN, NO. 7—The Garden of Brides (Mar. 23).
The vengeful Umballah, having delivered his three bags of silver and secured Col. Hare as his prisoner, departs for the Palace of Allah, leaving Kathlyn and Bruce tied to the tiger cart with their backs to the savage beast and facing another death, at the hands of the brutal brigands. Hardly has Umballah got away before the turbulent members of the brigand band demand of the chief their share of the silver ransom on an equality basis. The chief refuses to do their bidding, simply tossing them one bag and reserving two for himself. This precipitates a bloody riot, and in the melee the mutinous members of the band release Kathlyn and Bruce from the tiger cart, and tie their own chief to the cart. The victorious fighters then rush into their cave to divide the spoils. The leader of the mutinous band next conceives a bright idea of liberating the tiger and allowing it to tear their late leader to pieces. The chief, however, manages to deftly slip his bonds and dart away into the jungle. The brigands, in the security of their cave, pull the rope of the cage door, the tiger dashes out, pursues the chief and eventually kills him. While the victorious thieves are looking to a furtherance of their own selfish interest, Bruce and Kathlyn find two loaded rifles, and taking advantage of the brigands, bar up the entrance of the cave, leaving them prisoners, and making their own escape. They go forward to a little village where they are given shelter. Having recuperated there, Kathlyn decides that she must liberate her father, so they engage camels and retrace their trail to Allaha. At the outskirts of the city they send a message to Ramabai and Pundita. requesting assistance and disguises.

The friends of the story being reunited, lay plans in train for the liberation of Col. Hare. Ramabai has already broached to the ambitious Umbalah, the idea of marrying Col. Hare, who has been forced upon the throne, to a native girl, which would further the nefarious plans of Umballah to a desirable culmination. The imposing coronation of Col. Hare, the pitiful scene of chaining him to his own throne, and giving him the empty honors of a potentate with the humiliations of a prisoner, serve a series of sensational scenes. Umballah has fallen in with the plan for the furtherance of his ambitions and greedily consents to the suggestion of Ramabai. Native girls, heavily veiled, are then paraded before the throne, and their choice is almost forced upon Col. Hare. Kathlyn has been disguised as one of these native girls; and when she discloses her features to her father, he at once recognizes some plan is afoot for his own deliverance, and elects her as his consort. Her veil drops and Umballah. who views the ceremony from a distance, is completely in the dark as to her identity. He goes to the treasure-room of the palace, which is guarded by leopards, and secures the betrothal chain of pearls, but in his haste, he leaves the outer-gate of the treasure-room open, and the leopards escape, rushing through the palace in different directions. The formal announcement of the wedding has hardly been made, before the alarm spreads, and there is a mad scramble for safety. In the panic that ensues, Kathlyn becomes separated from her father and Ramabai, and hides in a covered cart, in the Garden of Brides. In the interim, Bruce has prepared camels for the party to take flight to the coast, but when they assemble on the outside of the wall of the Garden of Brides, the party are woefully disconcerted on learning that Kathlyn is the only missing member of the outfit. They are fearful that the leopards may have overtaken her, (To be continued.) 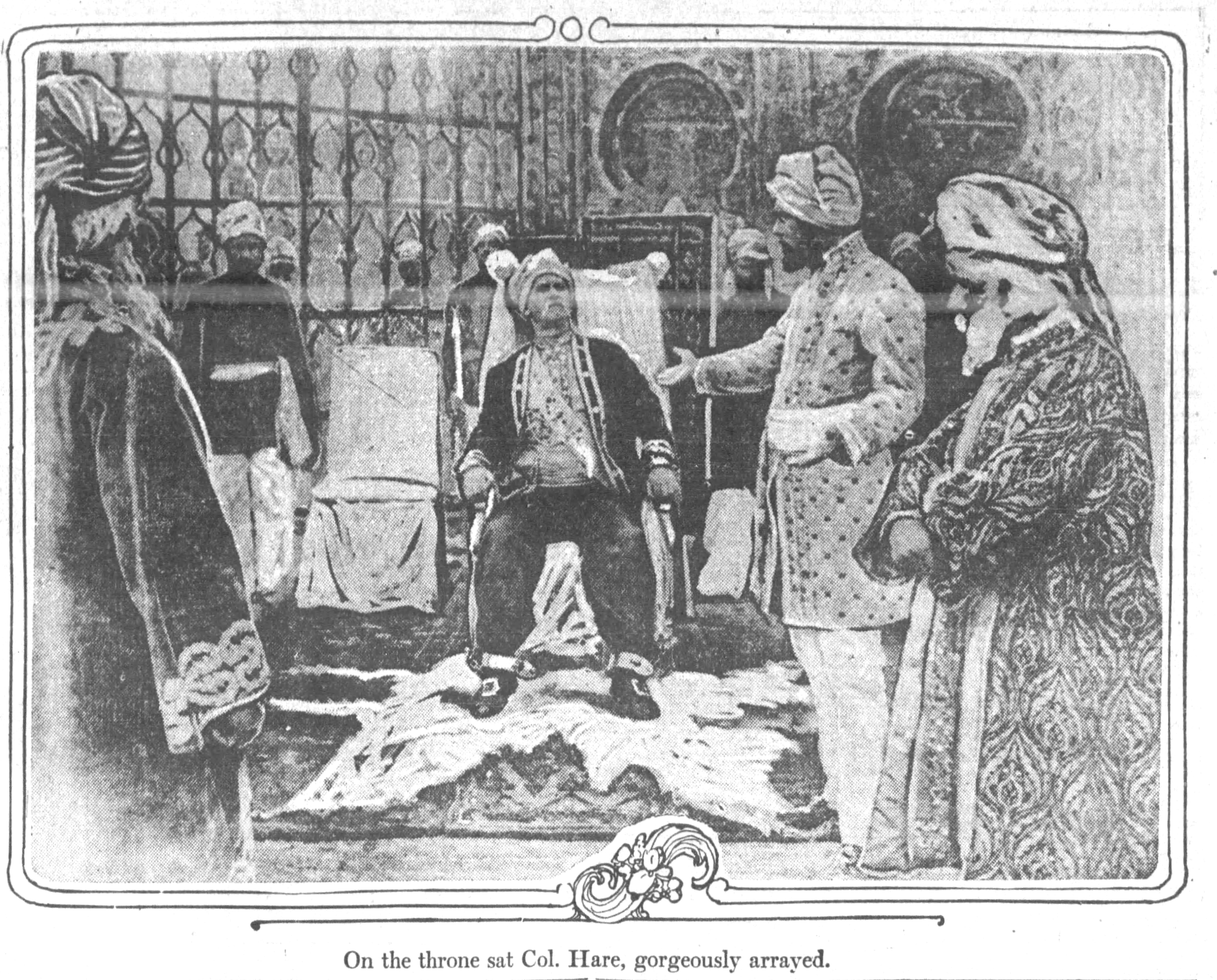 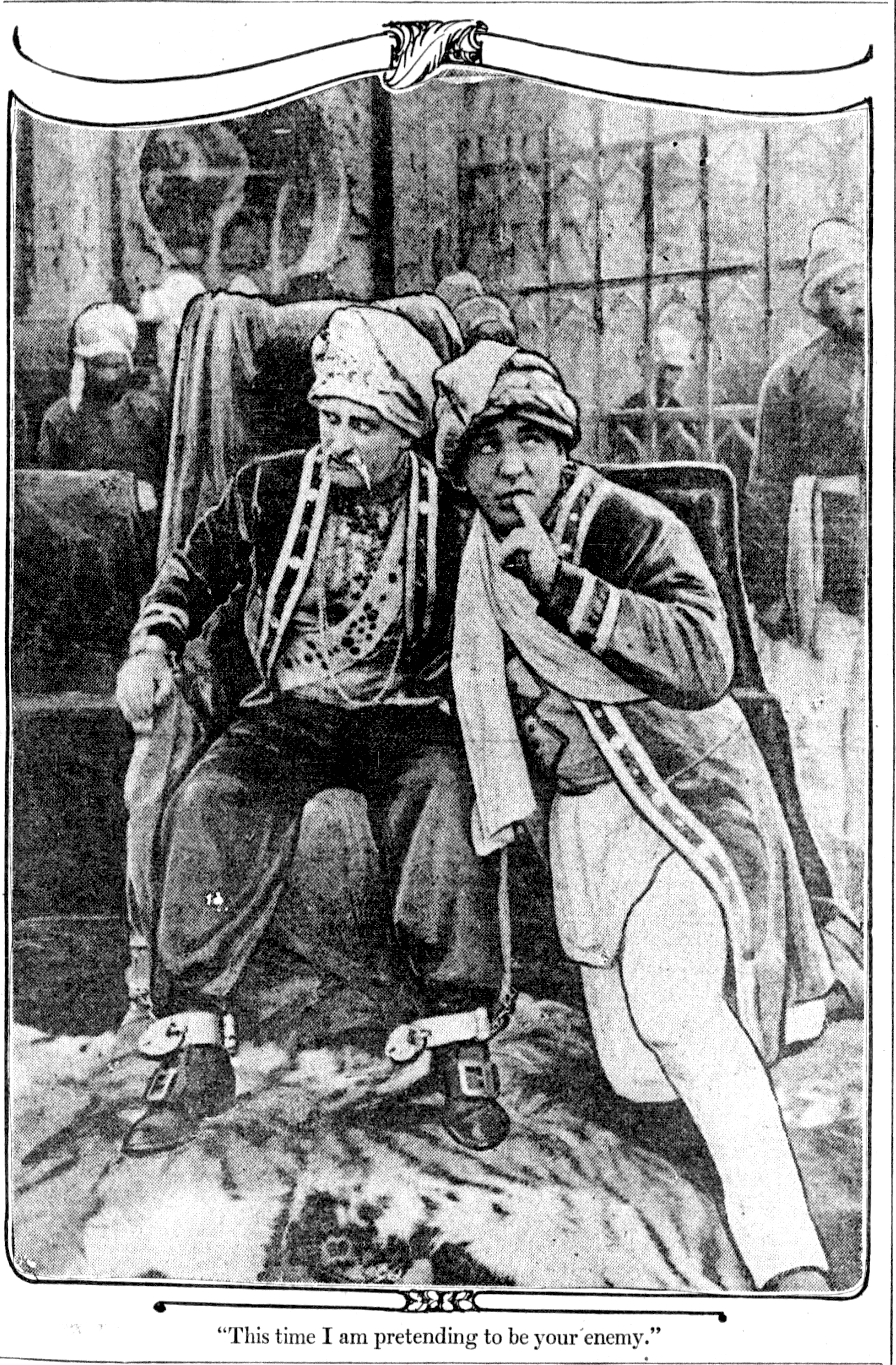 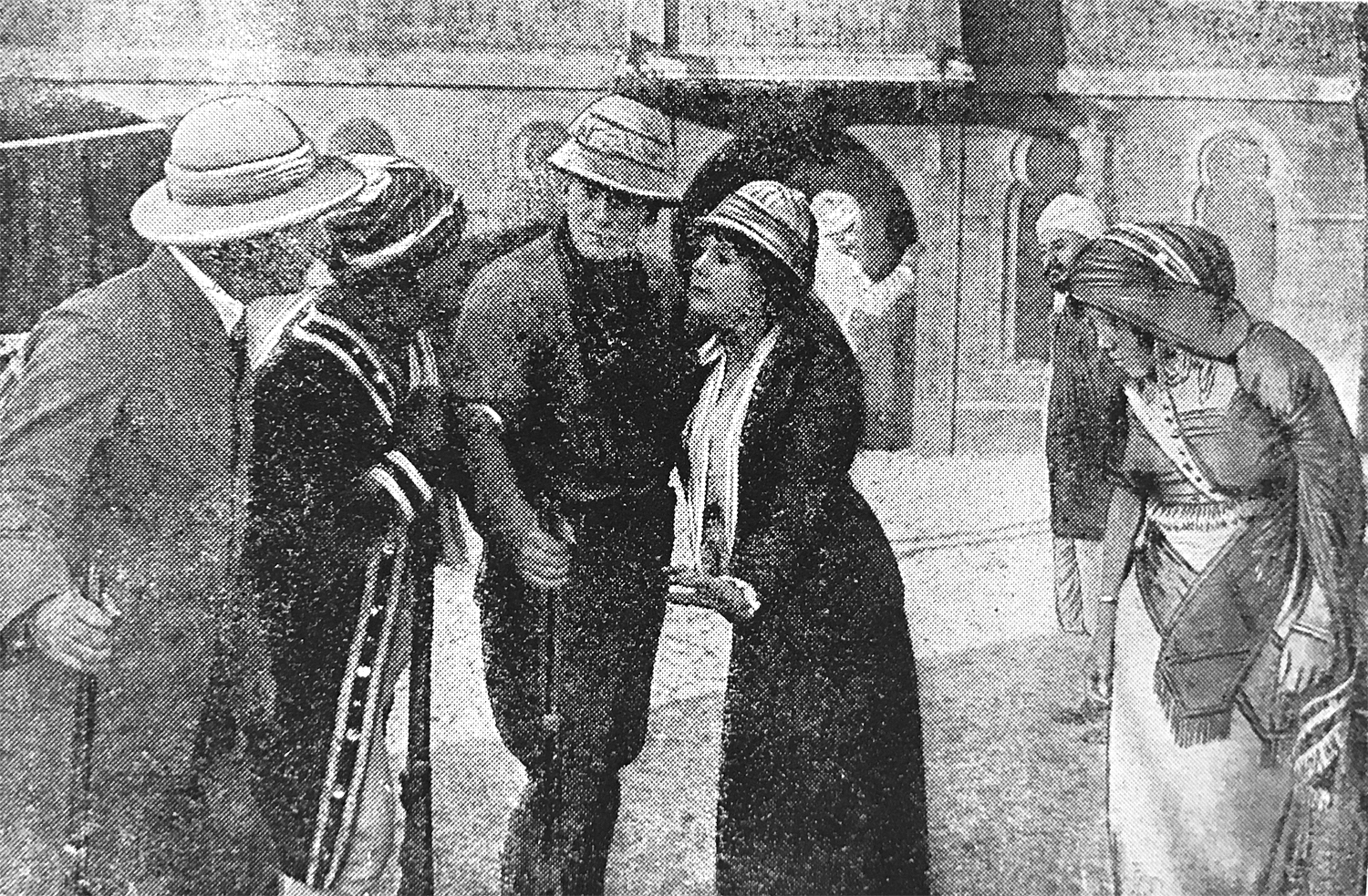 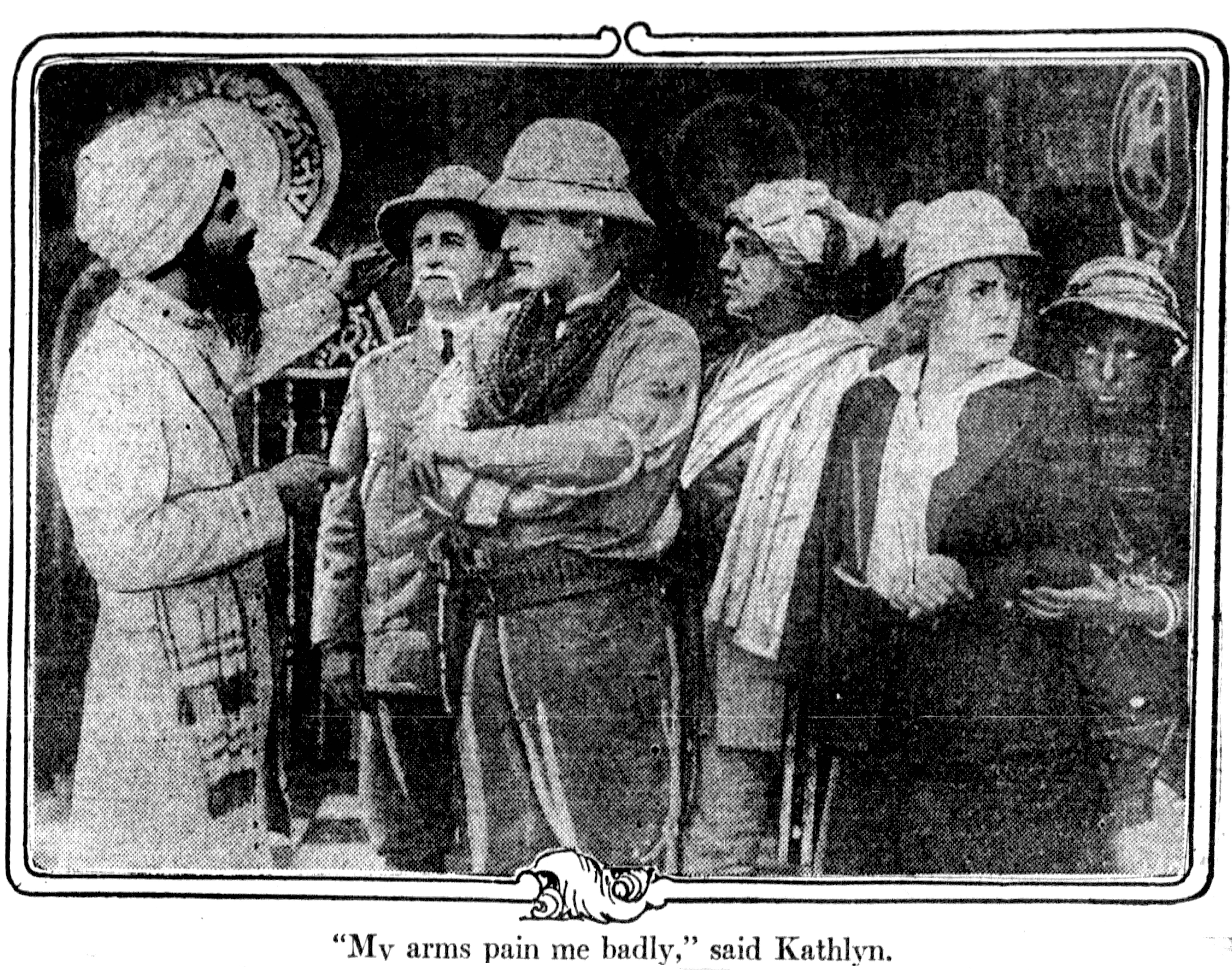 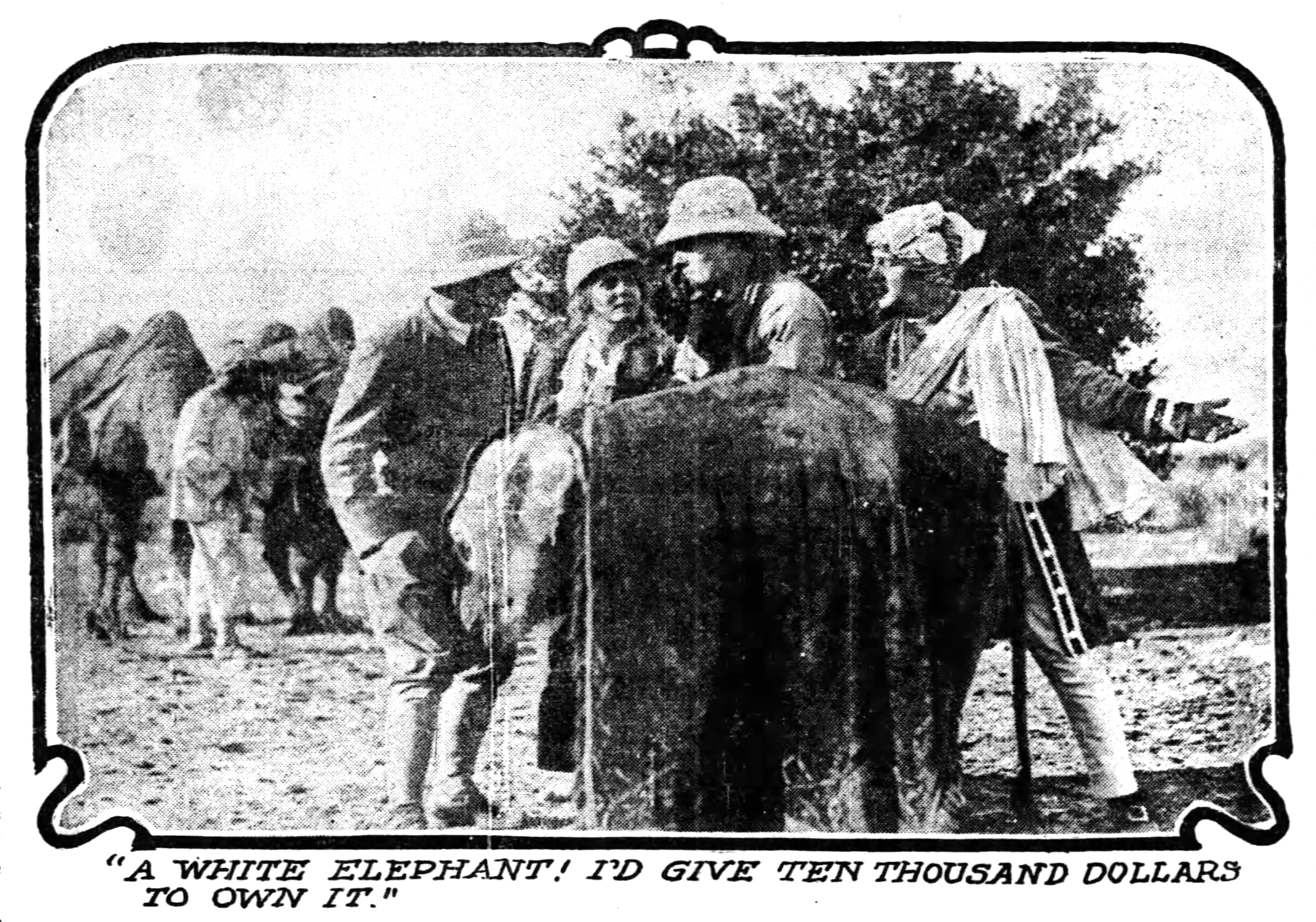 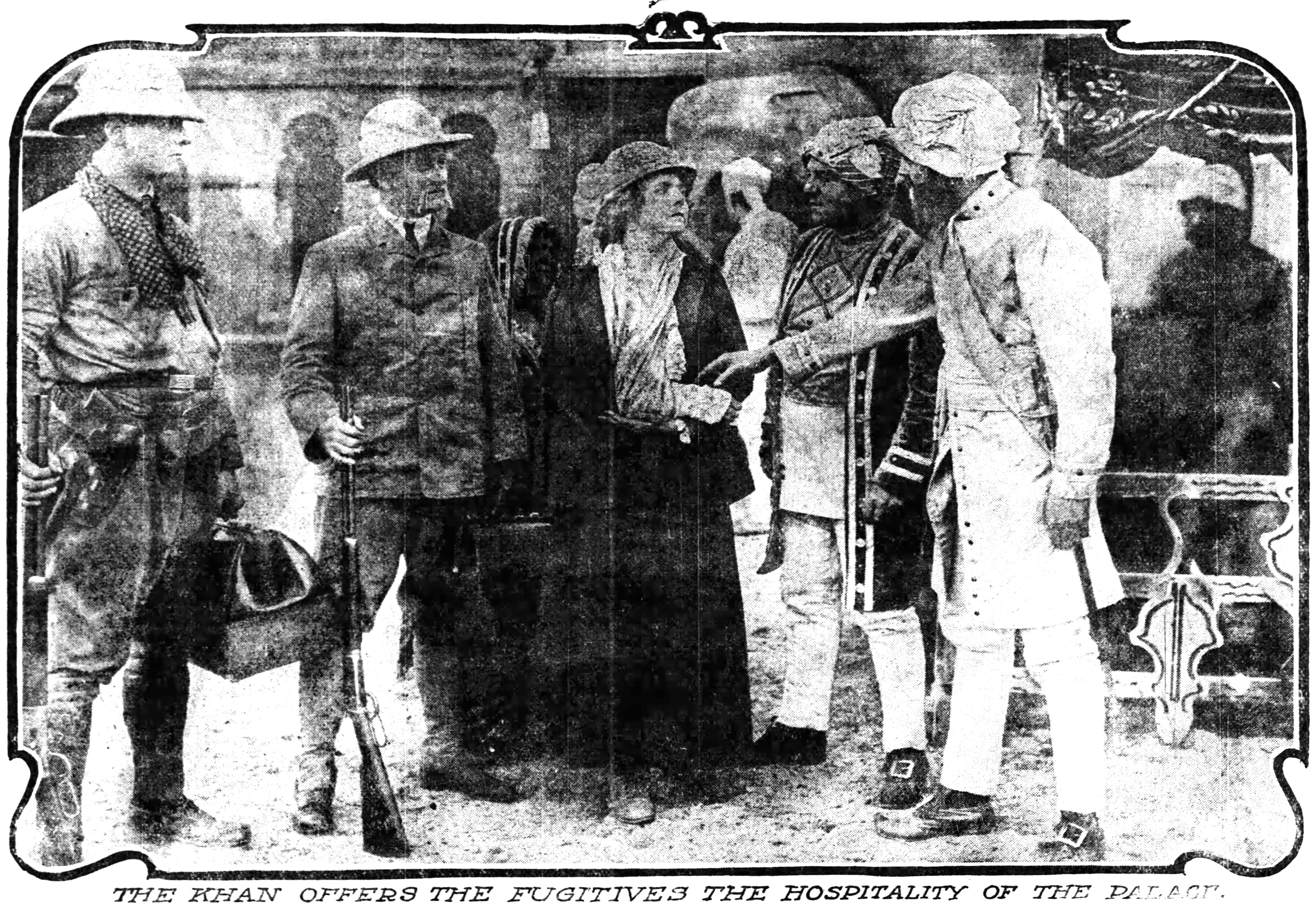 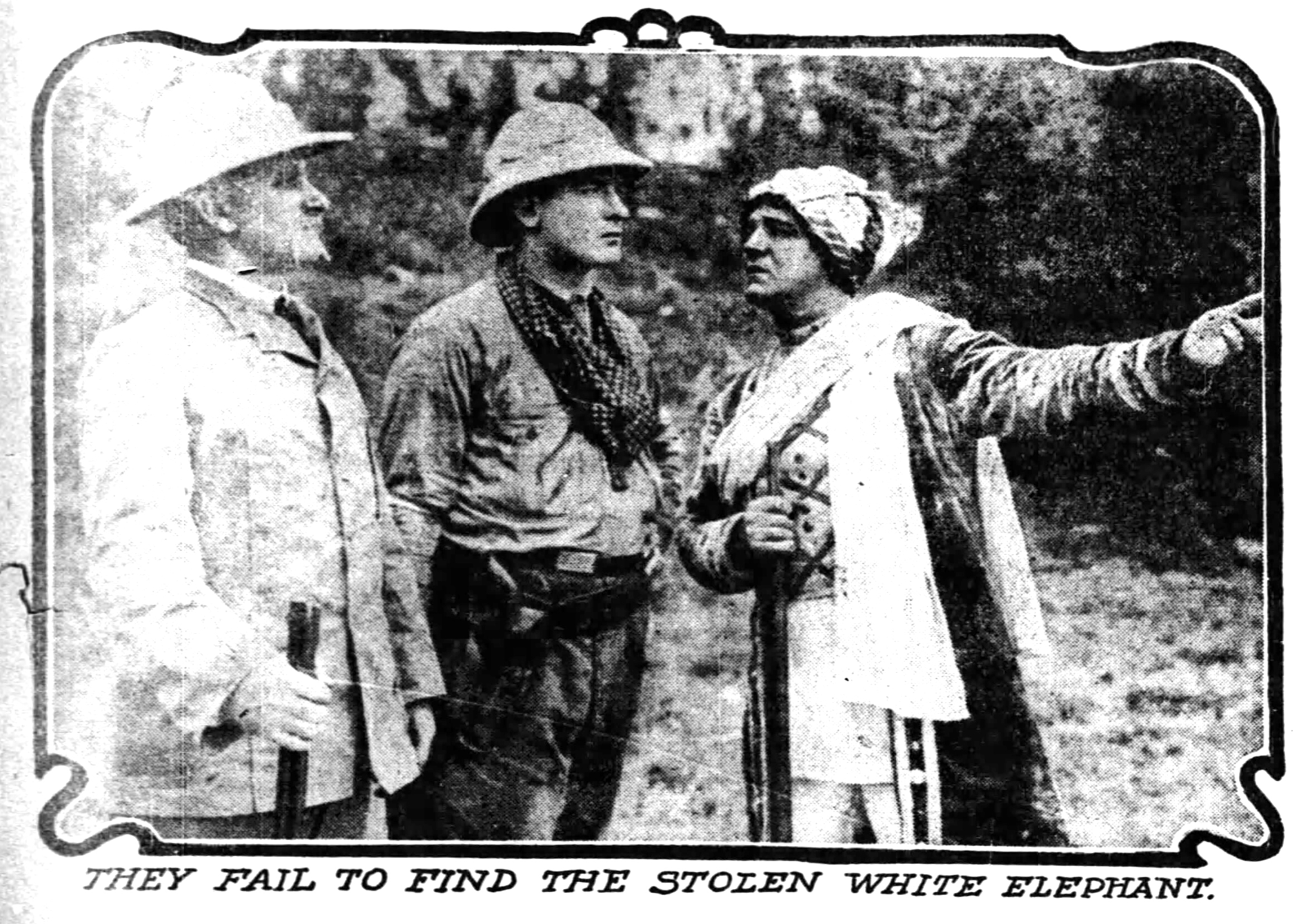 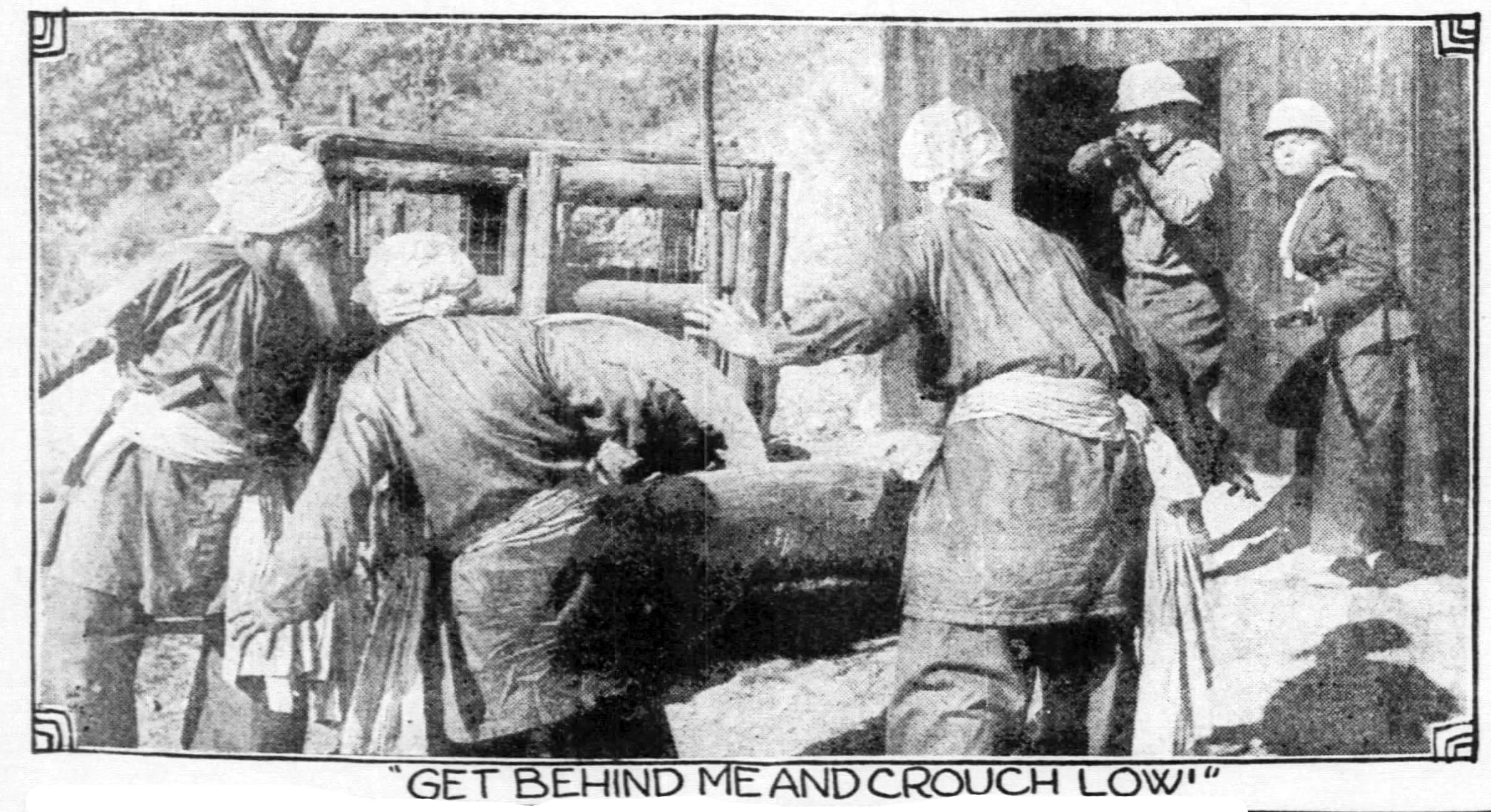 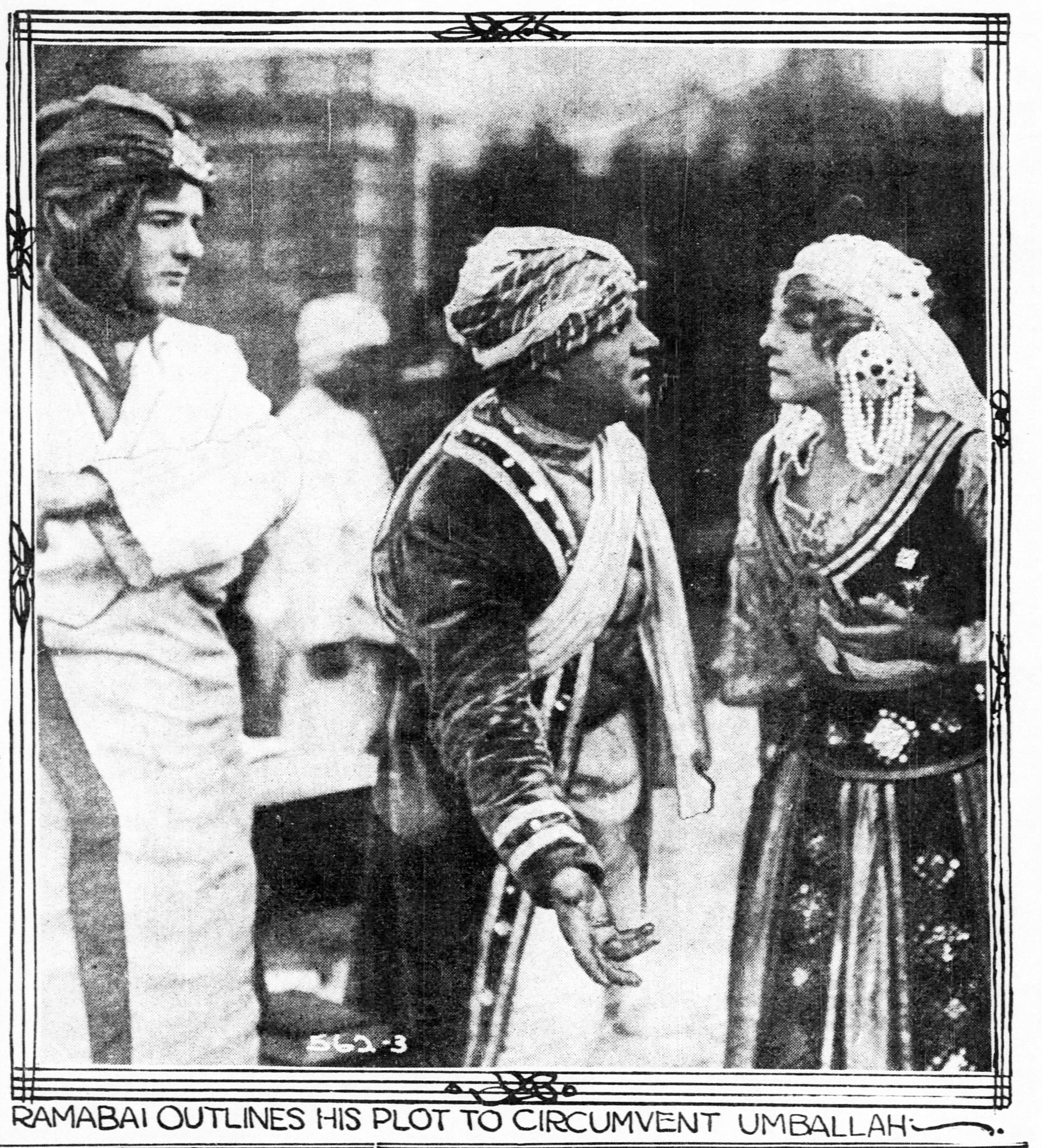 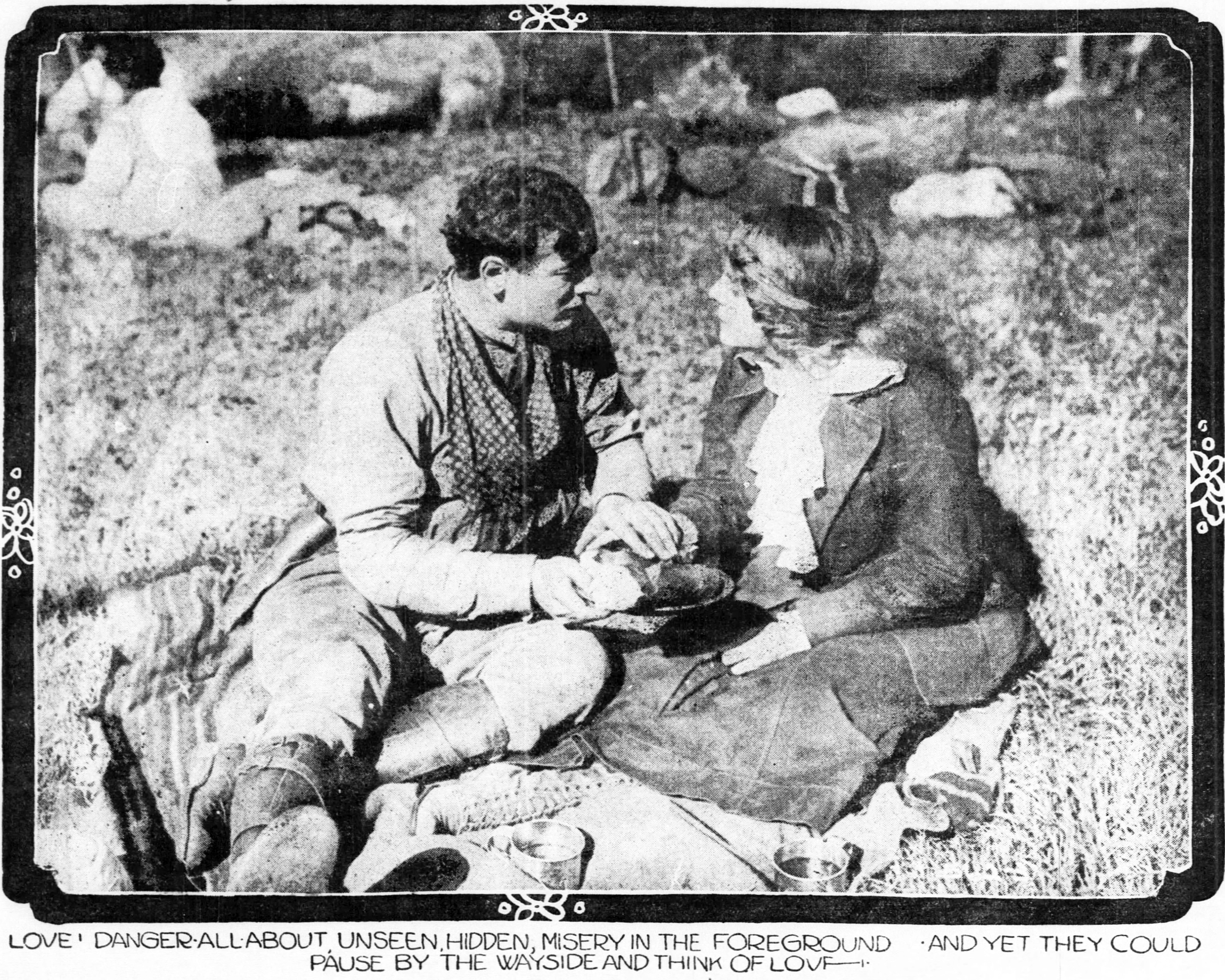 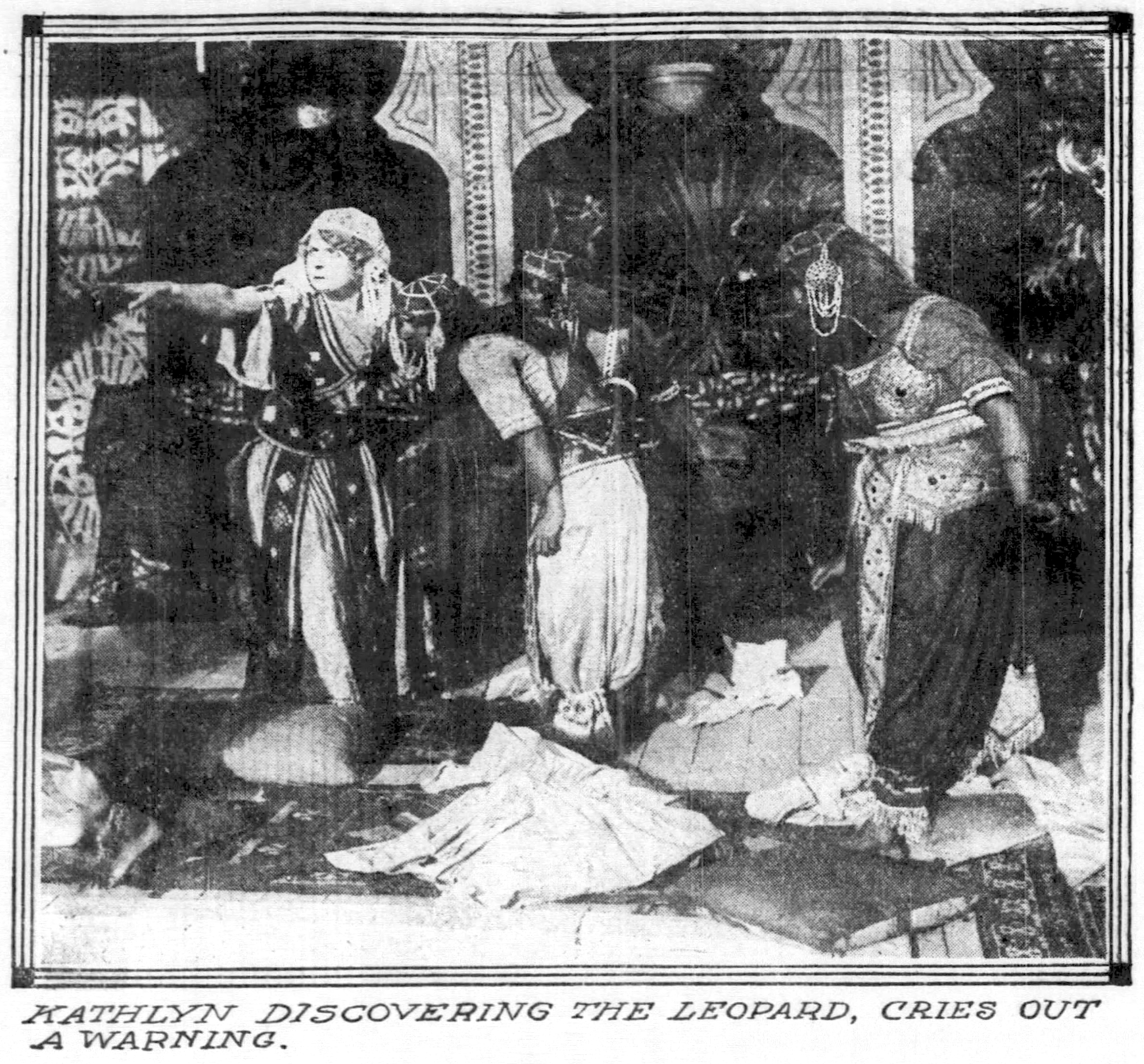 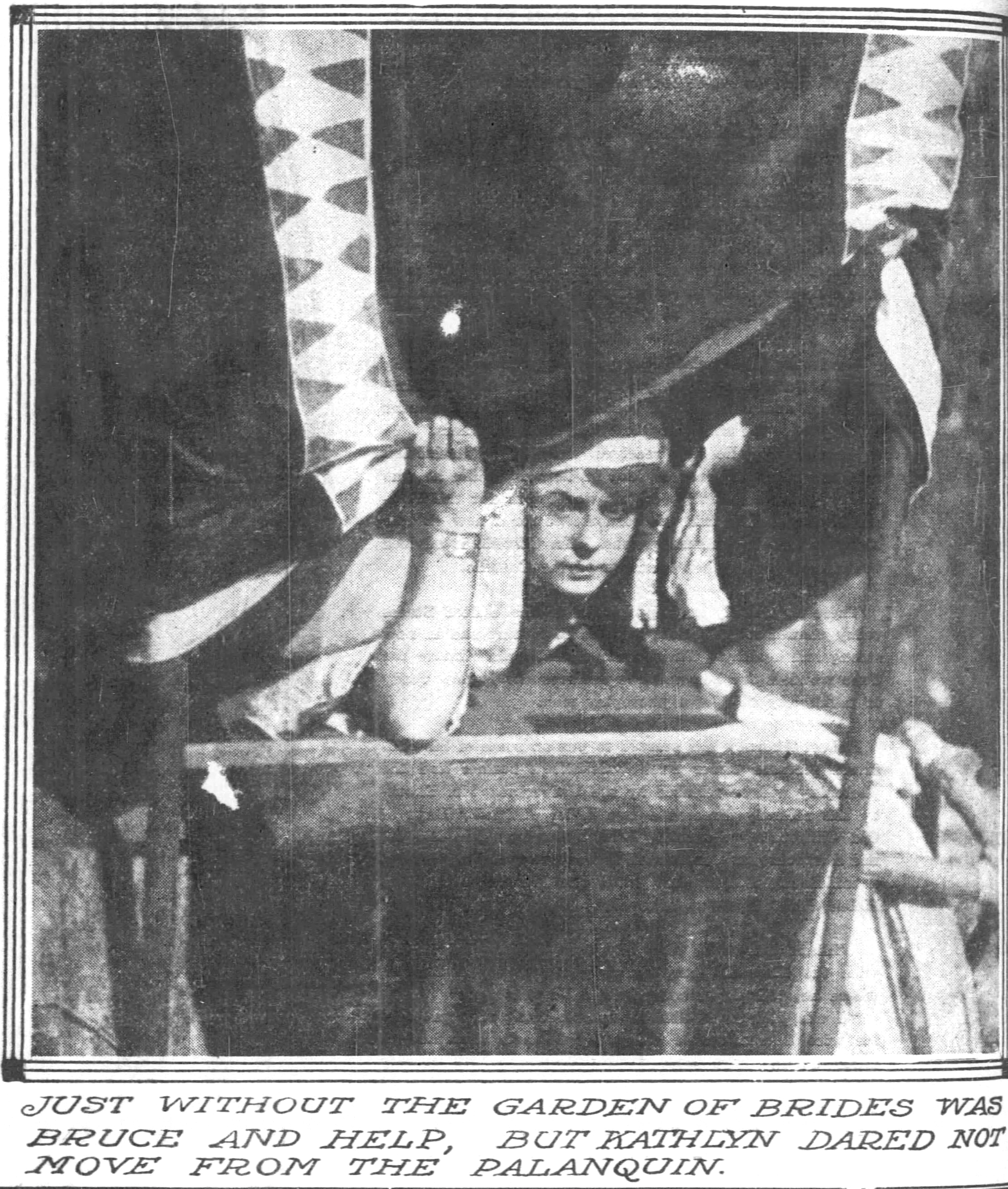 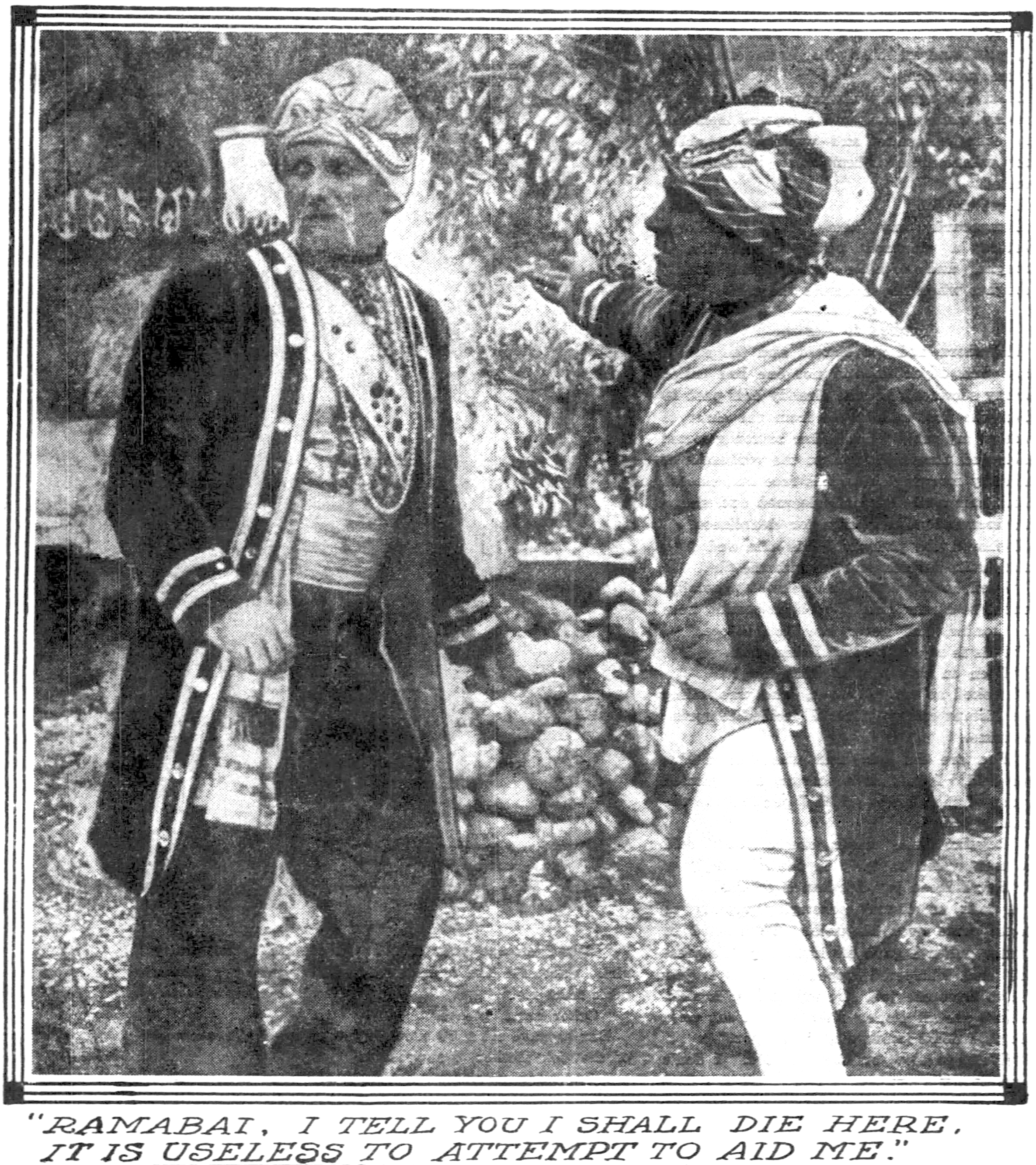 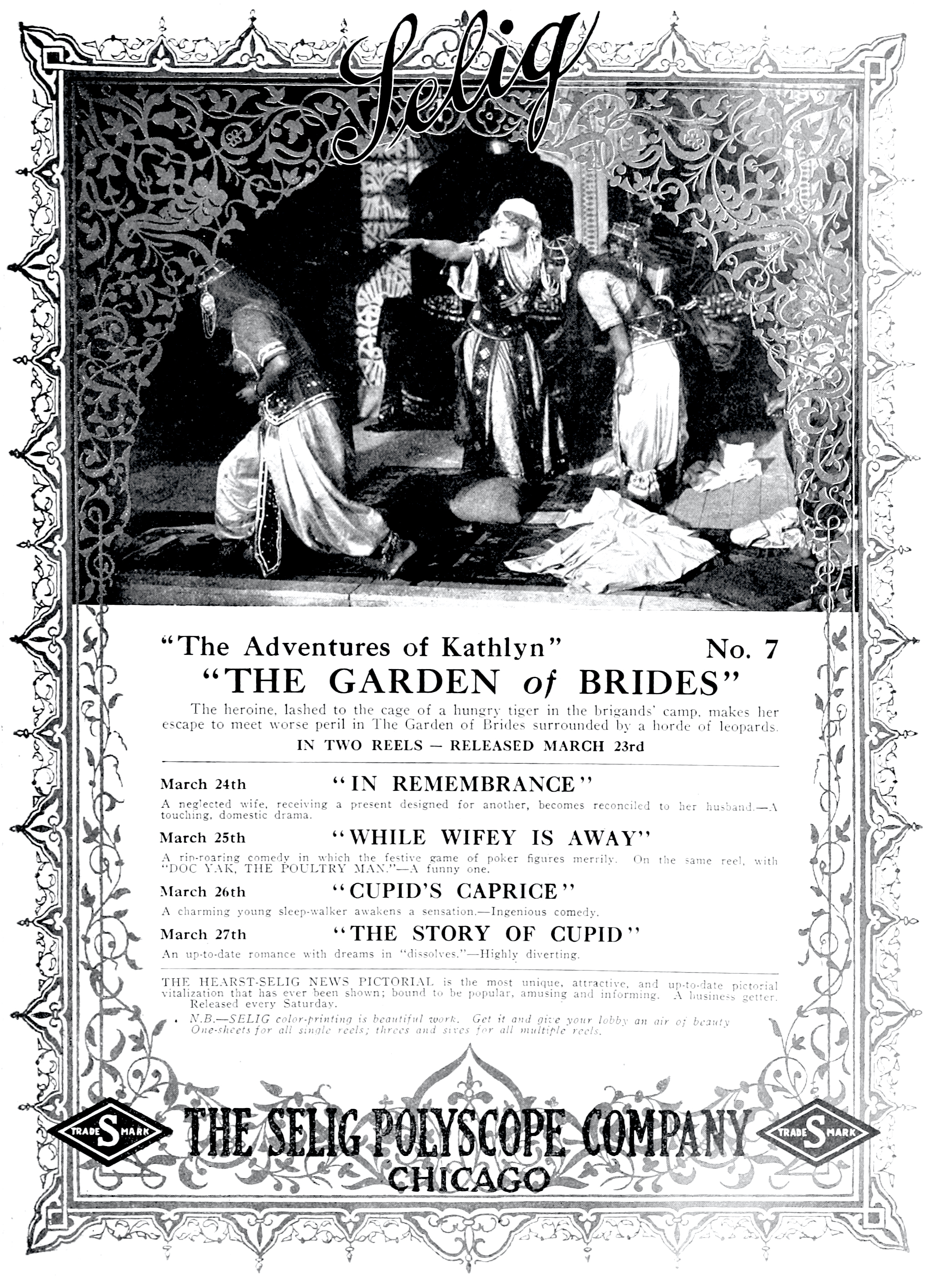