THE ADVENTURES OF KATHLYN, No. 12 (The King’s Will) (Special—Two Parts—June 1).
Fast following the death of the King of Allaha, Prince Umballah, dethroned by the revolution, manages to reinstate himself and orders Kathlyn and her father brought to the palace in order that one of them may be made the reigning sovereign. Two parchments conferring heirship to the throne to Colonel Hare and his family are now in the hands of the Supreme Tribunal, one of which has been proved a forgery. This has been cancelled by the late King, and consequently the genuine parchment is still in force. The throne is offered to Colonel Hare, but he emphatically refuses to accept and is arrested. Thereupon, the unwelcome honor is proffered to Kathlyn as next in succession. She, seeing a way to release her father, and revenge herself and family upon Umballah, instantly accepts and is crowned Queen. The first thing she does upon ascending the throne is to order the release of her father.

A girl of the Harem, who witnessed the murder of the King through the treachery of Umballah, appears and tells her story. Thereupon, Kathlyn and the Supreme Tribunal order the arrest of Umballah. He is ignominiously stripped of his rank and is sentenced to serve for life upon the prison treadmill. The High Priest has discovered the will of the King, which is brought to the throne room and read. It bequeaths a vast fortune in gold sovereigns buried on Volcano Island to Kathlyn. She prefers her liberty rather than the empty honors of Allaha, and offers to ^et and give the gold, distribute it to the poor if the Supreme Tribunal will release her and her family from heirship to the throne. This they agree to do. A crafty creature of Umballah manages to inform him of these doings, and in turn gets in touch with a faithful slave, who, by generous bribery of the guards, soon accomplishes Umballah’s escape. The latter, securing his liberty, deftly and quickly disguises himself in the garb of a holy-man. and preys upon the credulity of the simple sea-side folk, so that he gets their services and a boat, and makes a hurried trip to Volcano Island. The day following, Kathlyn, Bruce, her father, Ramabai and Pundita, secure swift mounts and ride toward the sea, proposing to voyage to the treasure trove. The ever crafty Umballah, knowing of their route and intentions, treacherously weakens the cables of the swinging bridge over a deep chasm, assured that they will be precipitated into its depths. A wandering lion, however, ventures upon the bridge, before they do, goes through and shows the flimsy character of its construction, and the evil sign of Umballah’s mischief.

Bruce, at once busy and undeterred, soon has the bridge repaired; they resume their mounts and go forward toward the seashore. Kathlyn, ever on the alert, saves the life of her chief boatman’s child, by picking up the infant as a leopard is about to attack it, and killing the hungry beast by a single, well-directed shot from her revolver. Bruce also has the good fortune to save the life of the boatman himself, who has stumbled into a leopard trap. The gratitude of the man is so great that he offers Kathlyn’s party all the boats at his disposal to help them make the voyage to Volcano Island. The scene shifts to this desolate but adventurous spot, showing Umballah and his followers locating the cave where the treasure is concealed. Subsequently, when the bags of gold are brought to light, the leader of the sailors asks at once for a division of it. Umballah quells this mutiny in swift and decisive fashion by plunging a knife into the malcontent and leaves him for dead as they, by his direction, hurry back to the boats with the treasure.

As these events are transpiring, Katblyn and her party reach the Island and begin a search for the care. Then there is a tremendous bush—the earth trembles, the slumbering volcano belches forth fire,, lava and rock, which compels Kathlyn and her party to run to shelter under an overhanging cliff, while tons of hot lava fall all about them as they crouch in the shadow of the rock, beyond harm’s fiery way. (To be concluded.) 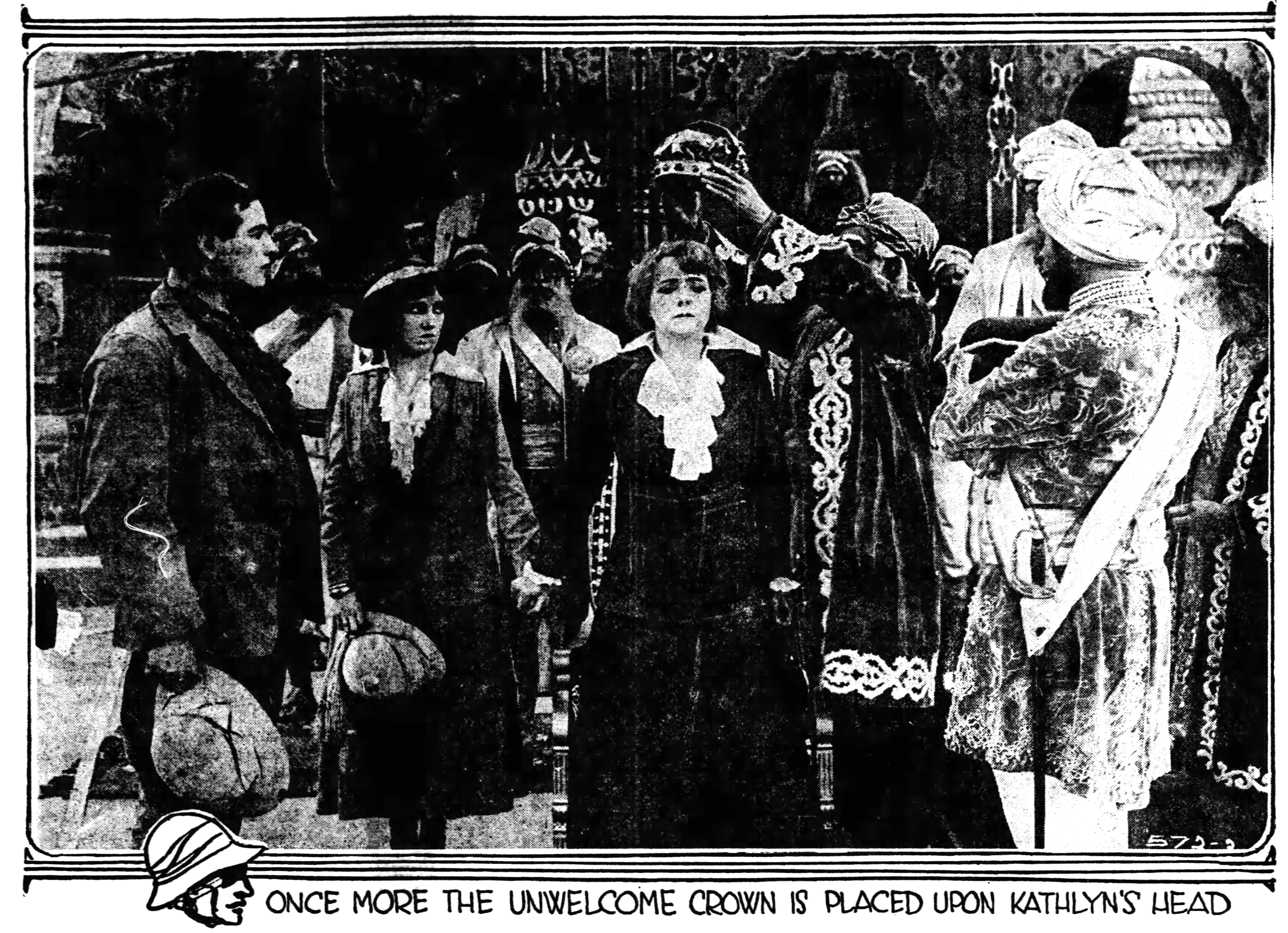 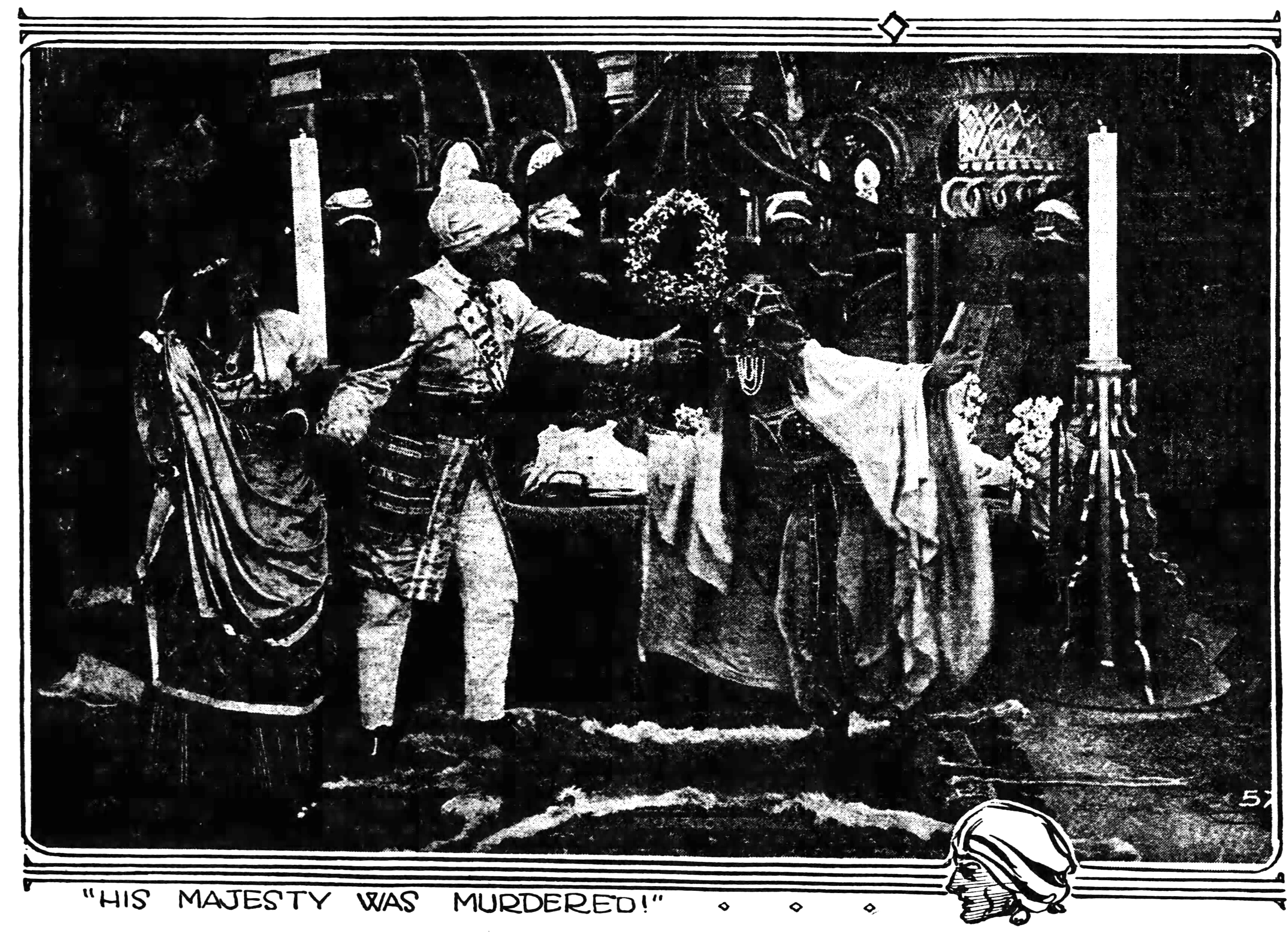