THE ADVENTURES OF KATHLYN (No. 11—THE FORGED PARCHMENT (May 18—Special—2 parts—).—Episode 11: The captain of the guards, who was deposed by Umballah, observes Kathlyn in a perilous plight in the third balcony of a burning building, and immediately rushes to Colonel Hare’s residence, informing Bruce and the colonel of her tragic position. They rush forward. Bruce throws up a rope, which Kathlyn fastens to the balcony. He then ascends and helps her to come down. They reach the ground none too soon, for the building is now a mass of flames and quickly collapses. Prince Umballah goes on his wicked way, thinking that he has ended the opposition of Kathlyn by fire, but soon after reaching his own residence, he is informed that his spy, the Majordomo, awaits him. He is admitted to Umballah’s presence. Believing that he is near the end of his reign, Umballah informs the spy that the king, whom everyone believes to be dead, is alive and well, but has been kept a prisoner by his orders. He is secluded in a hut in the forest, closely guarded by Umballah’s slaves. The Majordomo, after receiving his startling bit of information, is further instructed to return to the palace where Ramabai has assumed the throne, and to make full and accurate reports of all that takes place there. The following day, Ramabai, who does not know the real office of the Majordomo, gives him a message to Colonel Hare, informing him that he intends to arrest Umballah for high treason. The spy quickly carries this information to the wicked prince, who, in retaliation, forms a plan to poison Ramabai. He crushes some supposed pearls, which are in reality a composition of deadly poison, and gives this powder to the Majordomo, ordering him to put it in Ramabai’s wine cup. At the banquet that follows, Kathlyn picks up this cup by mistake, and is about to drink from it, when the Majordomo, who really reverences her, sees the necessity for quick action. He snatches the cup from Kathlyn’s lips and drains it himself, believing that it was his destiny to die, because he had failed in his mission. In his dying breath, he confesses the plot to kill Ramabai; likewise that the king is alive, and held a prisoner in a jungle hut, whose location he describes accurately. With this information, a search is started for the king. But a disloyal slave at the same time carries the news of the Majordomo’s death, and his confession to Umballah, and the latter decides to kill the king rather than have him rescued by Colonel Hare, and restored to the throne. With this purpose in view, Umballah starts out on an elephant, while Colonel Hare, Kathlyn and party are already well on their way on horses. Umballah, in his haste to cut across country, goes through a dangerous swamp, so that the elephant is mired, and he has the great dissatisfaction of seeing Kathlyn and her party ride by him, he helpless to go forward. The searching party scatter and Kathlyn stumbles upon the hiding place of the king, just as a leopard in a nearby tree is about to spring upon the guards at the door of the hut. They run for their lives, leaving Kathlyn to save herself. The leopard springs from the tree to the roof of the hut, which gives way, dropping the ferocious beast upon the sleeping king. He awakens and gives battle, but would immediately have been killed had not Kathlyn slain the beast with a well-aimed shot from her revolver. When the real king is restored to the throne, Colonel Hare requests his highness to cancel the document making him heir to the throne, to which the king willingly consents. Then Kathlyn tells the reigning potentate how Umballah stole the document from her. Soldiers are then sent to Umballah’s house to recover this parchment, but Umballah, anticipating such a move, has skillfully forged the document, which the soldiers find naturally, and return to Colonel Hare. This is canceled by the king, who believes it to be the genuine document. Umballah has been scheming as usual in highly original fashion, and has a plan to dispose of the king. He cages a lion in a royal cart that usually carries the ladies of the Harem, and when opportunity presents itself, the hungry savage is taken to the window of the king’s private chamber and released. The infuriated beast jumps upon his majesty, and almost tears him to pieces. Ramabai, bearing the commotion, runs to the king’s chamber and finds that the long-suffering man is gone past recall. His tragic death again changes the affairs on the chess board of state. The councilors again declare Umballah the Prince Regent of Allaha, and he in turn demands that Kathlyn and her father be declared the only heirs to the throne. They are reluctantly brought before the councilors, and armed with the forged document, show it to him for relief. Immediately Umballah declares the forgery, and shows the genuine parchment. This so angers Kathlyn that she forgets herself and would fain end the life of the hateful Umballah, when the councilors sternly order her arrest.
To Be Continued. 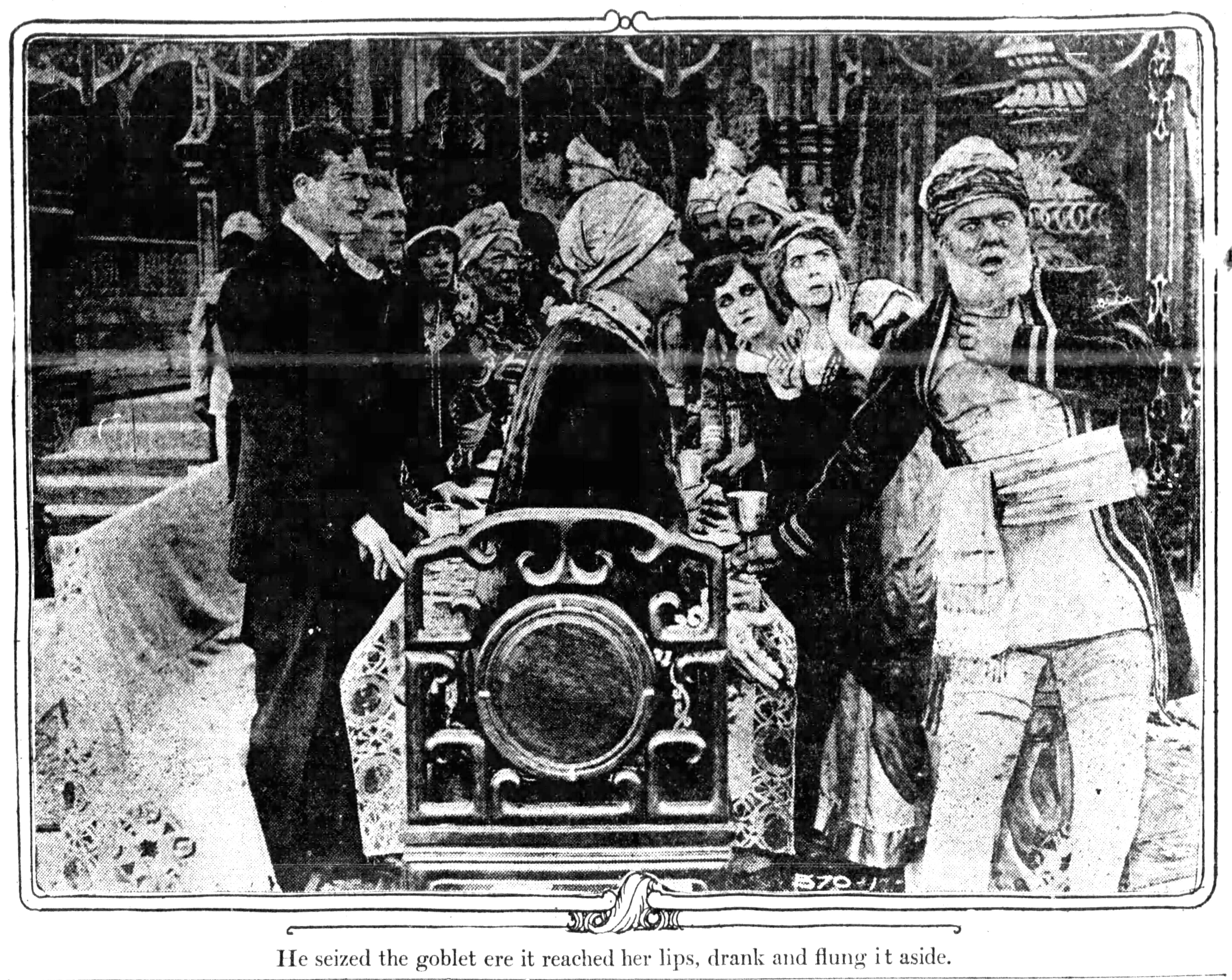 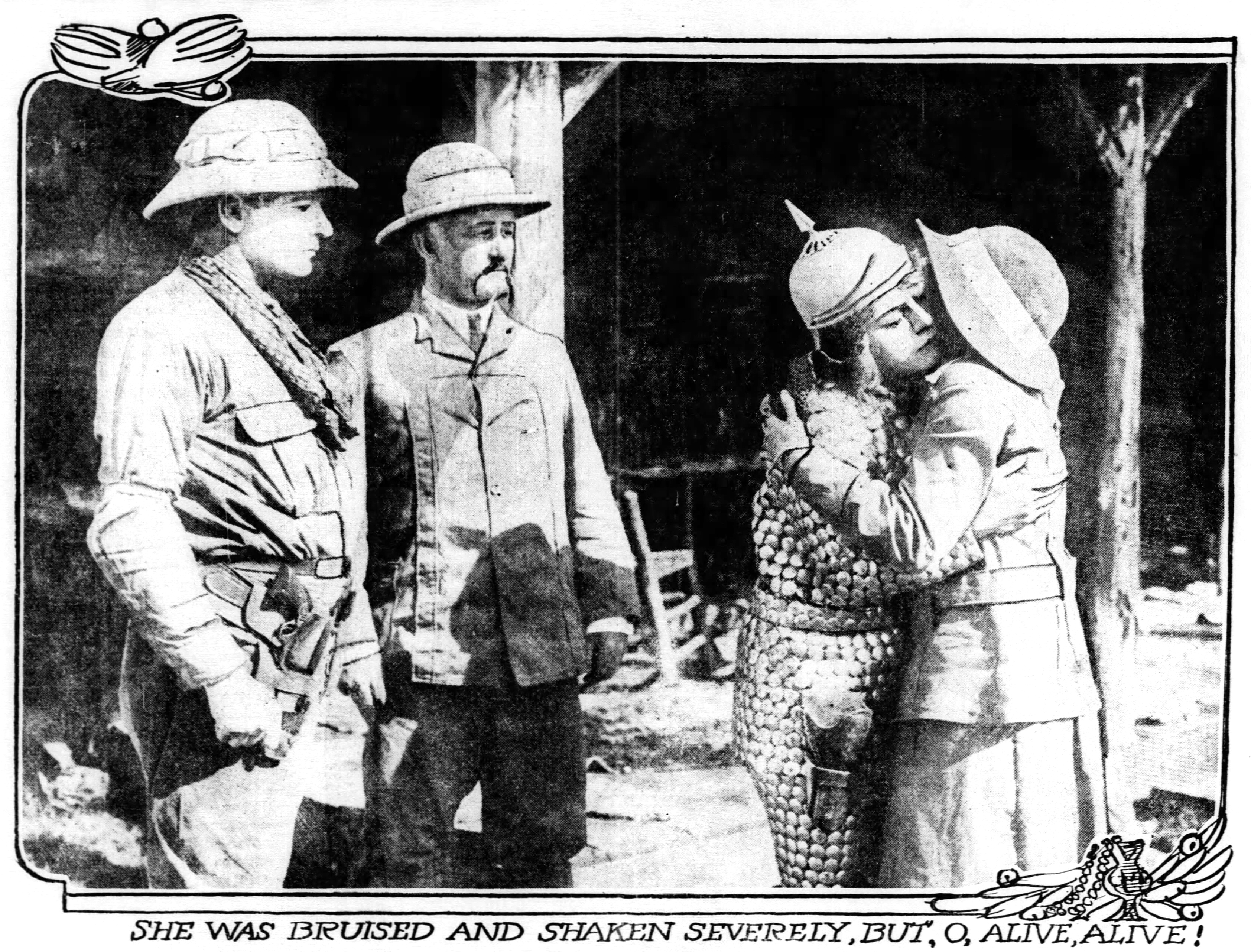 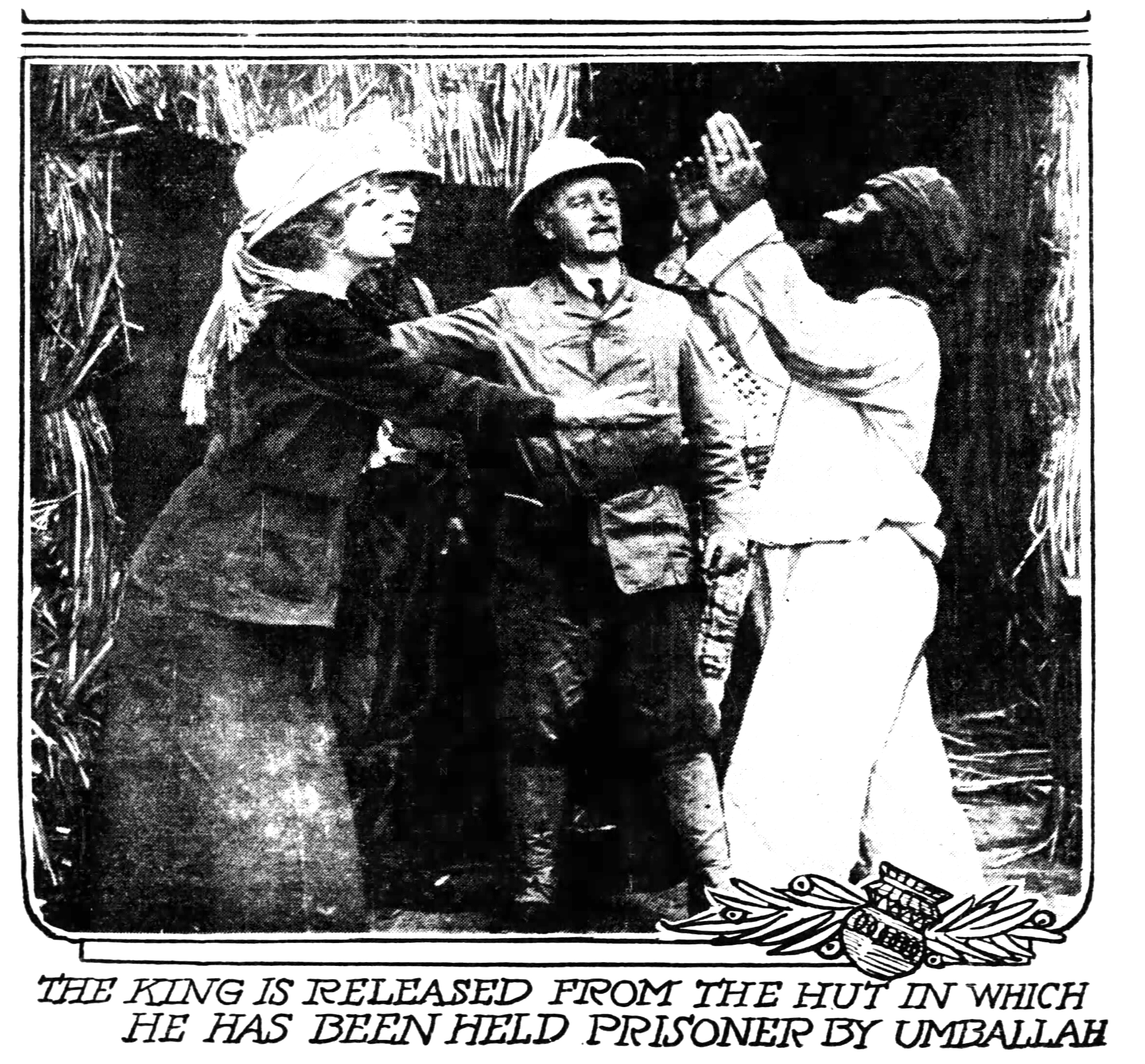 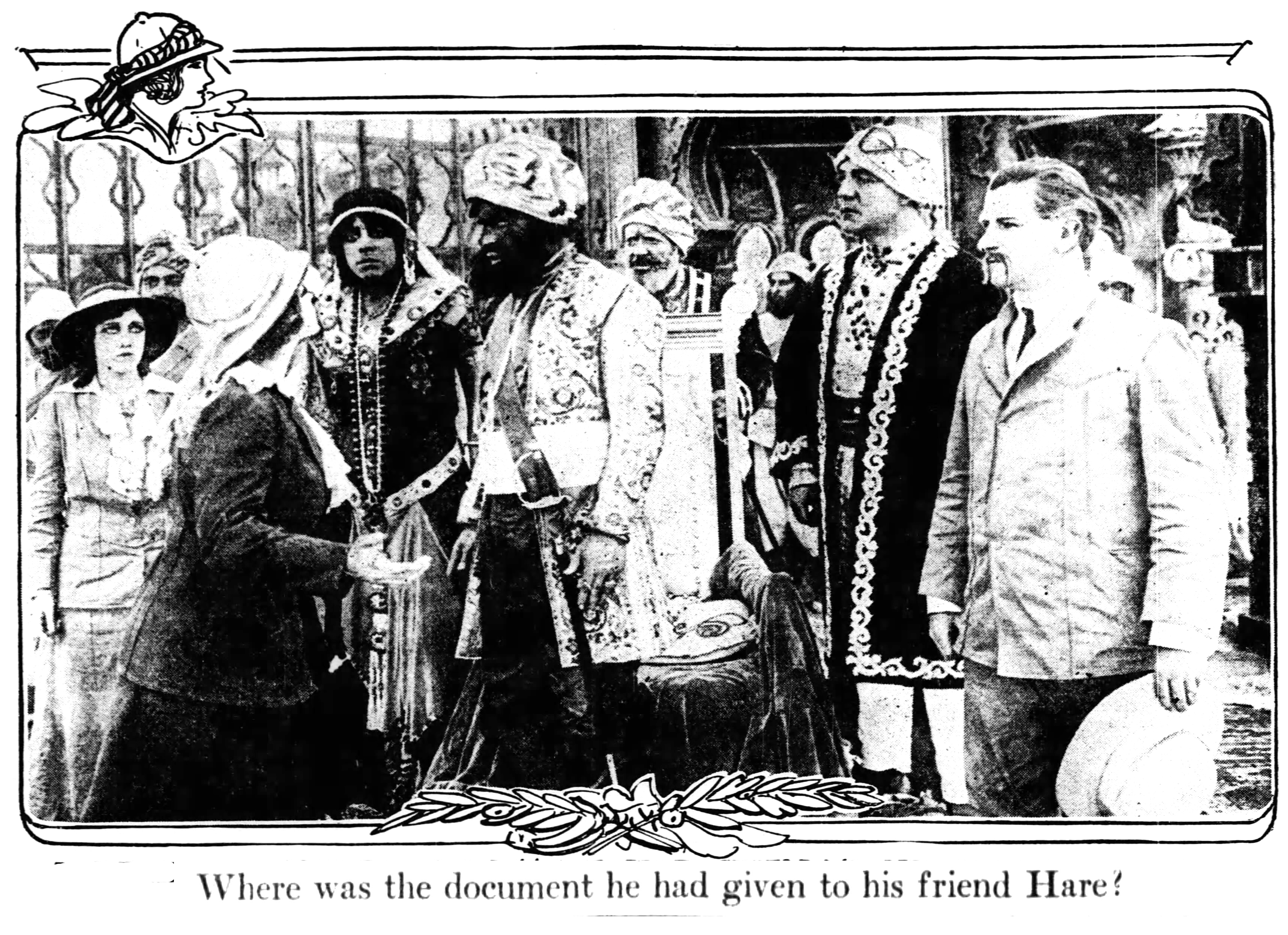 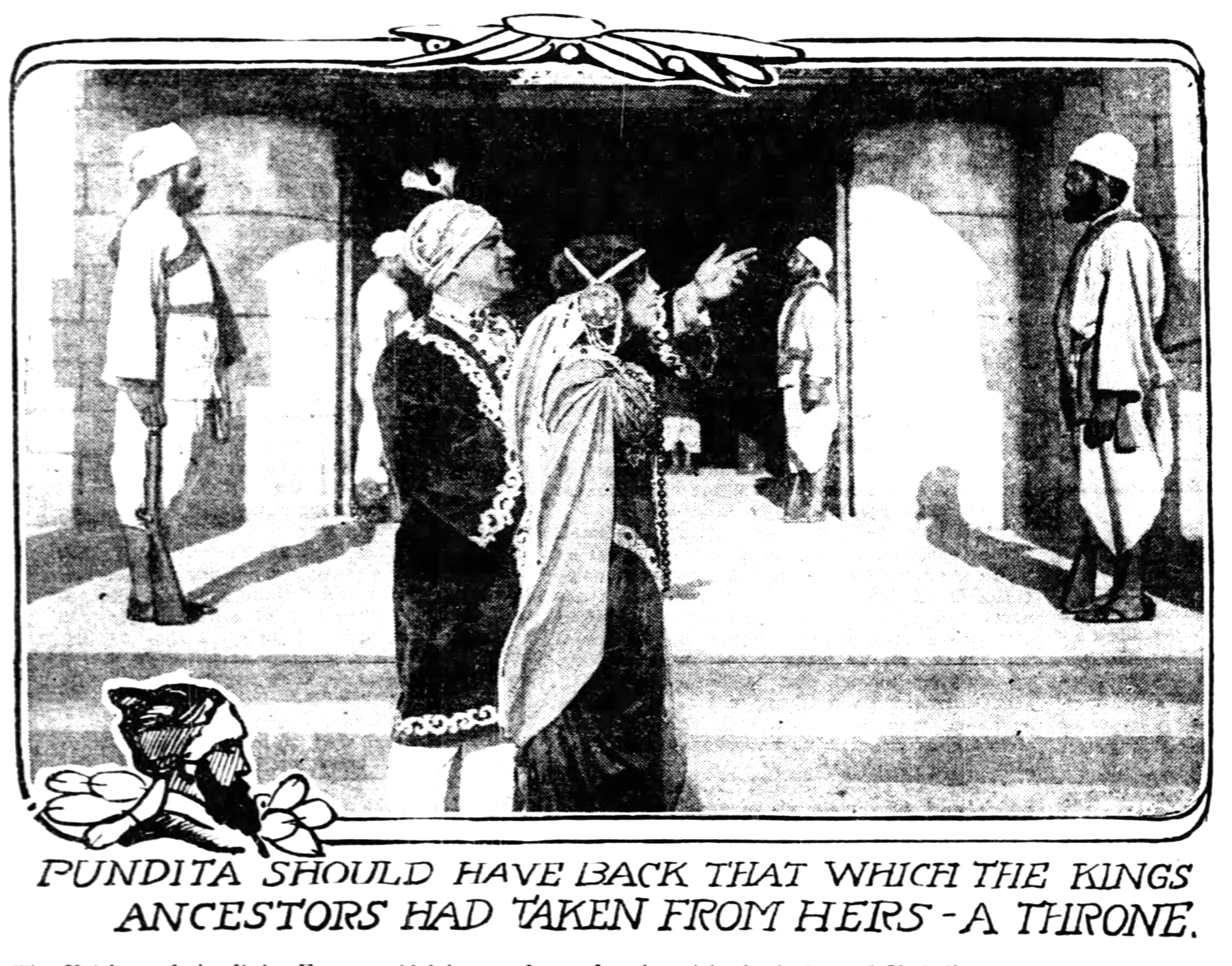 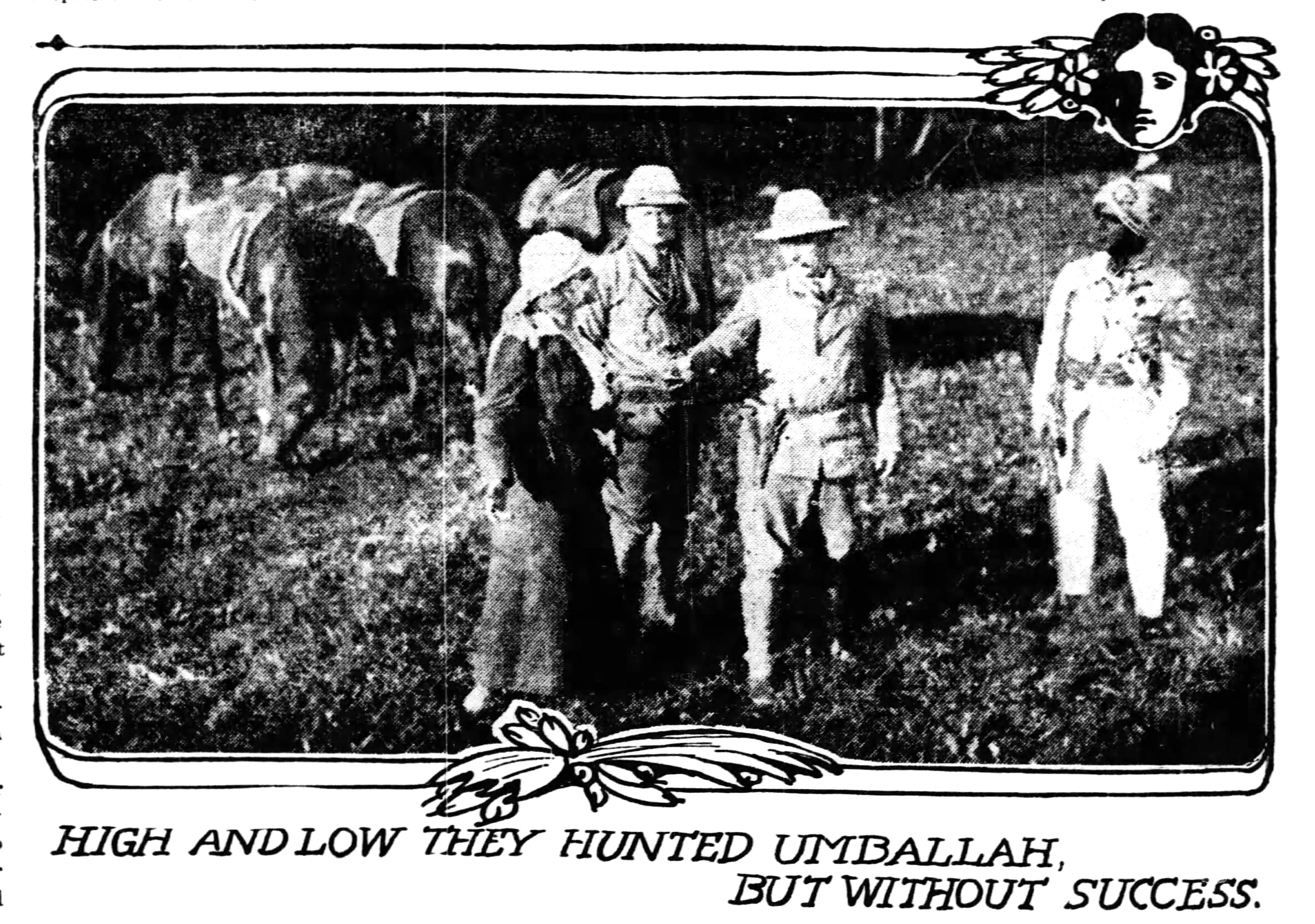 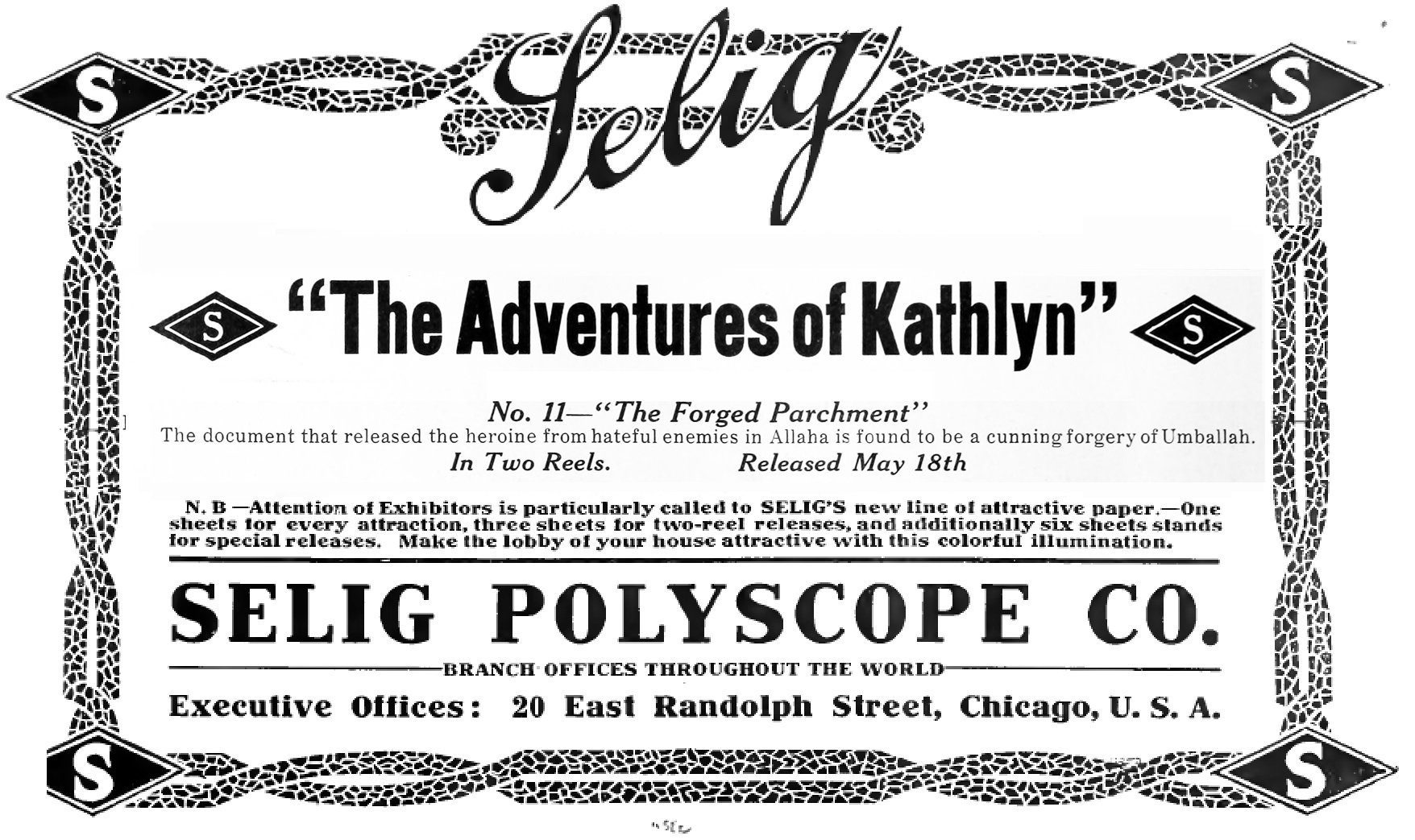