THE ADVENTURES OF KATHLYN (No. 8)— THE CRUEL CROWN (April 16—Special—2 parts).—
Pandemonium follows the escape of the leopards, placed to guard the treasure-room in Umballah’s palace. Royal personages and their attendants flee from the spotted terrors, and Kathlyn takes advantage of this to get away from the throne-room, where she was surrounded by enemies. She flees into the Garden of Brides and takes refuge in a covered bullock cart close to the palace walls. The scene opens as Kathlyn lifts the draperies of the covered cart and gazes affrighted at the prowling leopards in the palace yard. As they rush by, she deserts the cart, and runs through the garden. Still, the walls seem to bar her escape.

A heavy, clinging vine Is not to be despised and Immediately uses this means to scale the barrier. Her father and Ramabai, who have been reinforced by Bruce and Pundita, have their camels only a short distance away and her appearance is hailed joyously. She is assisted down the wall by a ladder; then the party mount their camels and start through the city of Allaha.

As they pass through the outer gate, they are recognized by Umballah’s Captain of Guard, who hurriedly rushes to the palace and notifies Umballah, who is holding a session with the Council of Three, of his discovery and their departure. Uniballab derides to give chase, as he is particularly anxious to recapture Col. Hare, who has been made king, merely to serve as the creature of his caprice.

Then begins an exciting chase over plains, and through woodlands with thrilling incidents. At a native village, the party come upon a festival in which the dancers are masked with animal heads. Learning of the close pursuit of Umballah, they
persuade the dancers to allow them in their places, and although Umballah and his followers come upon the scenes and see the dancers, they do not penetrate the disguise and recognize them, and so disgusted, they finally reluctantly return to Allaha.

Kathlyn and her party, having secured fresh mounts, start on their way to cross the mountains and eventually stop and camp for the night. During the hours of darkness, treacherous natives steal their horses, greatly inconveniencing the travelers.
Different members of the party start out in the morning to hunt their property, and Kathlyn is trailed through the broken country by a pair of hungry tigers. Her situation is perilous, indeed, when a sheep-herder observes her and, throwing up a rope, Kathlyn fastens it to a rock, and then slides down the face of the cliff, leaving the maddened, astonished brutes snarling at the summit.

Hardly has she escaped this danger, when she hears the howling of a pack of wolves, and rushes breathlessly along until she sees the mountain rest house where the faithful Pundita is resting. The wolves make for the cabin, but the women cunningly
see an inner room in the house, and by concealing themselves in the cupboard, allow the wolves to rush into it, then, shoving the door shut—trap the savage howling beasts. By this time. Col. Hare and Bruce have arrived upon the scene—Kathlyn shows the hunter how she has imprisoned the wolves, and he leisurely picks off the leaders with his rifle.

About this time a caravan comes that way, which they join, and eventually arrive safely at a seaport town. Here they learn, to their sorrow, from a California cablegram, that Kathlyn’s sister, Winnie, had sailed several weeks before for India, and is now in the city of Allaha. Although their own safety was secure, they decided at once to return to Allaha, as they are familiar with the treacherous disposition of Umballab, and know he will visit all his wrath upon the innocent girl.

This is about as they expected, for the real ruler of Allaha, having discovered Winnie and recognizing her as the girl he saw in California, makes her a prisoner, and, previous to . placing the Crown of Allaha upon her head, has her sequestered in the harem. Kathlyn and her party secure disguises before entering the city, and come upon the scene on the very day of the coronation. They manage to secure admittance to the throne-room, and Kathlyn secretly gets a message to her sister, assuring her of the plans made for her rescue. The openly cruel treatment of Umballah to Winnie causes Kathlyn to throw aside her disguise, and boldly reveal her own identity. 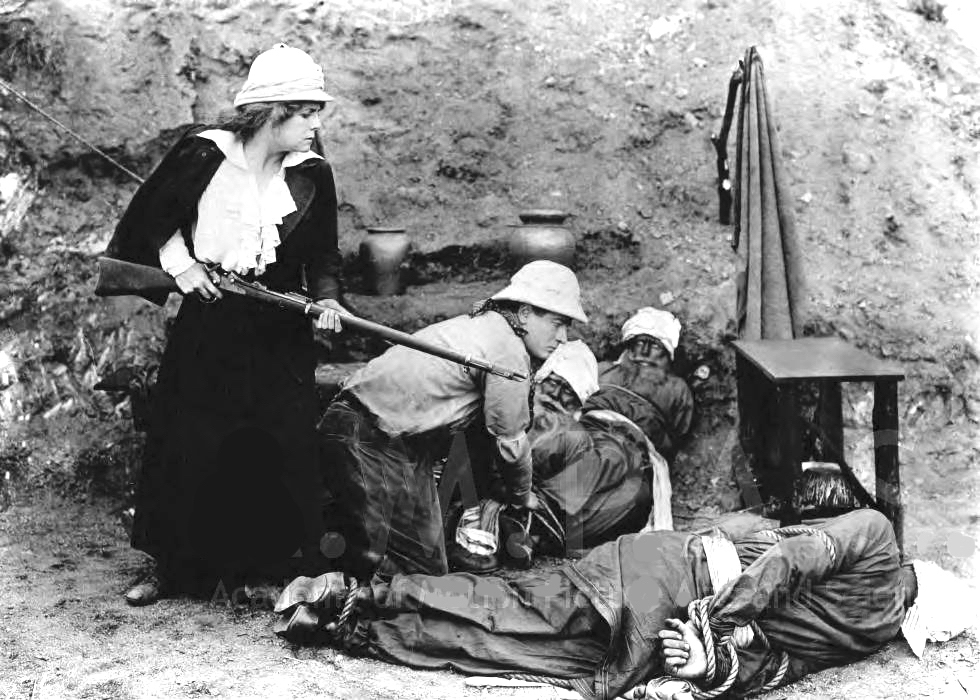 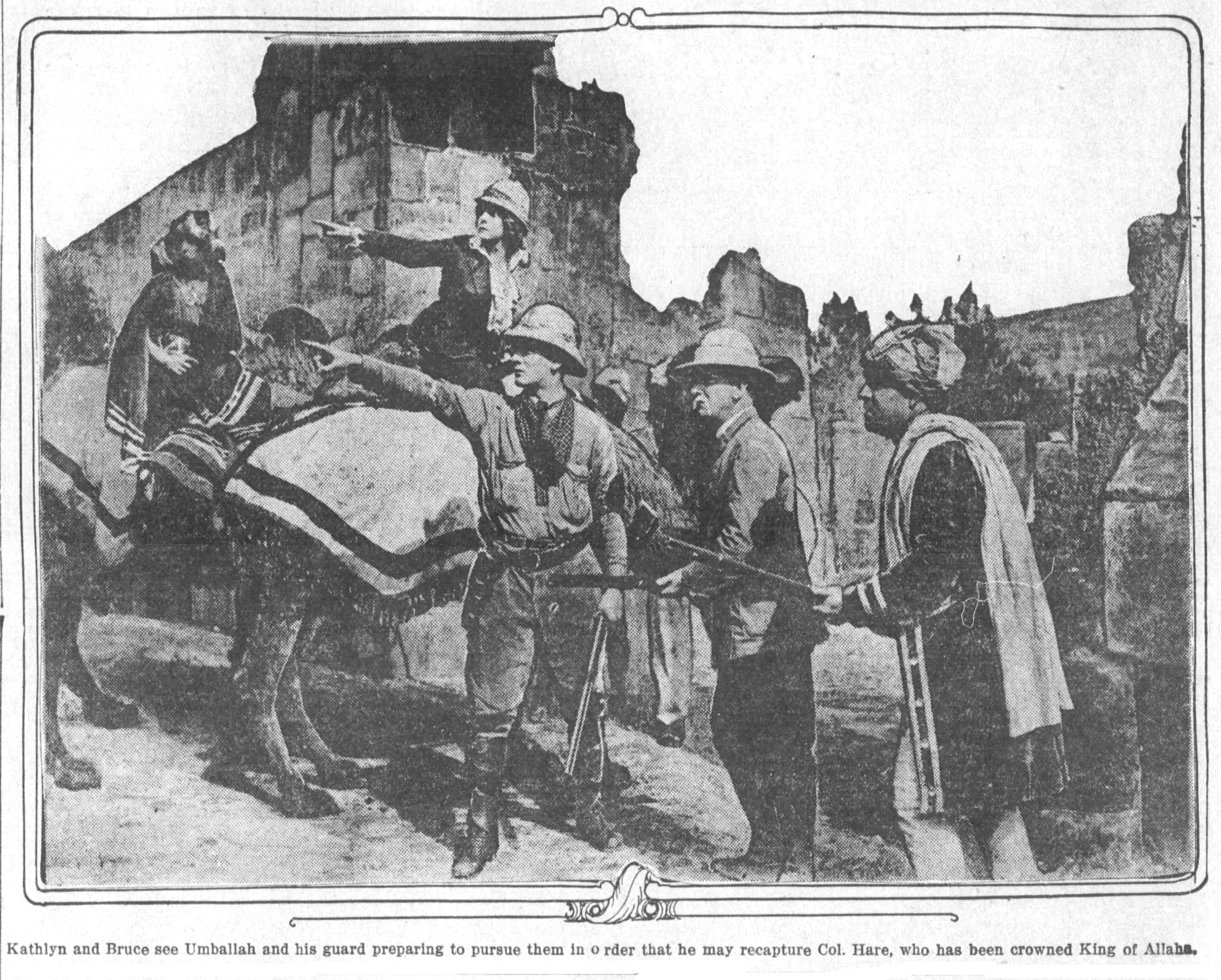 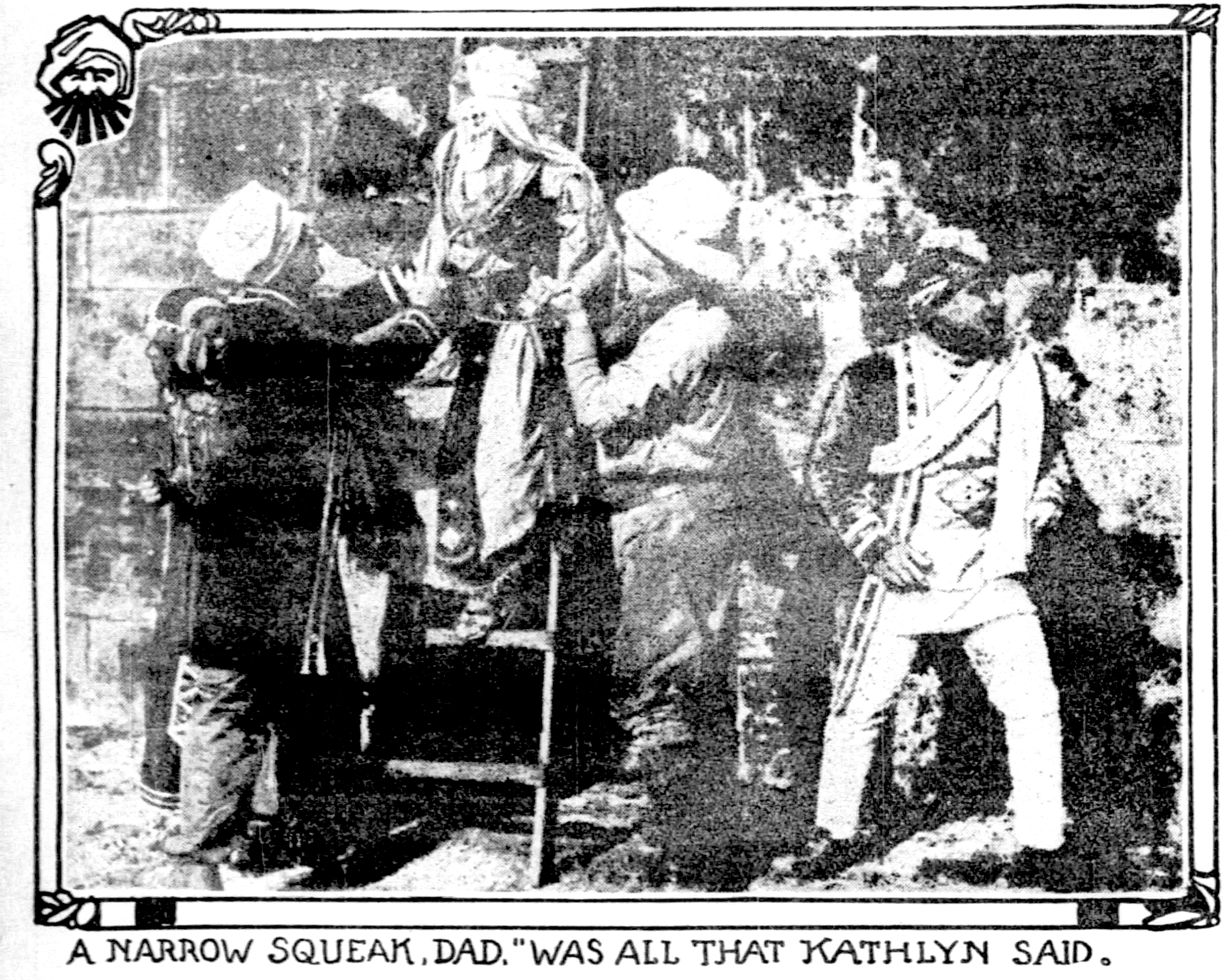 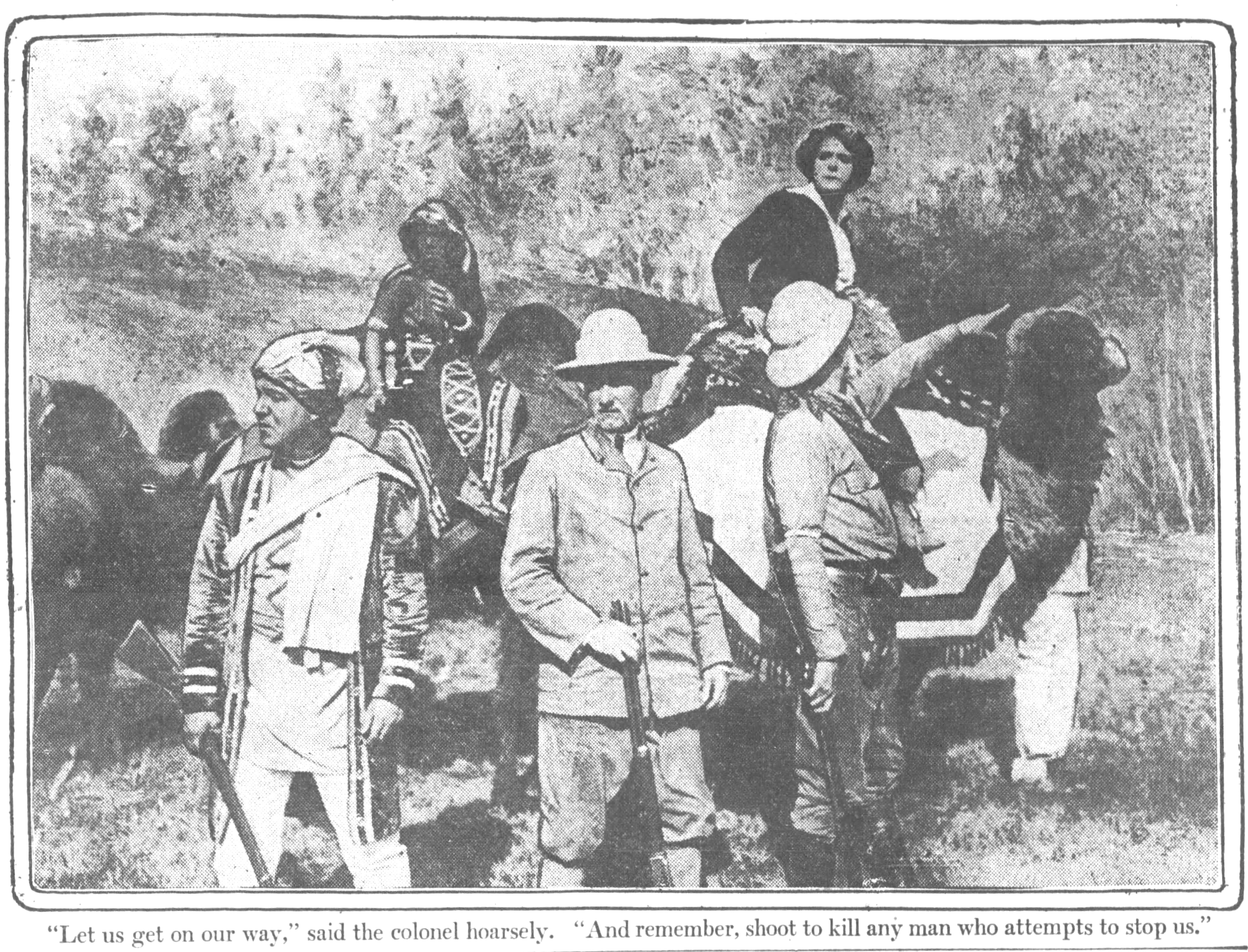 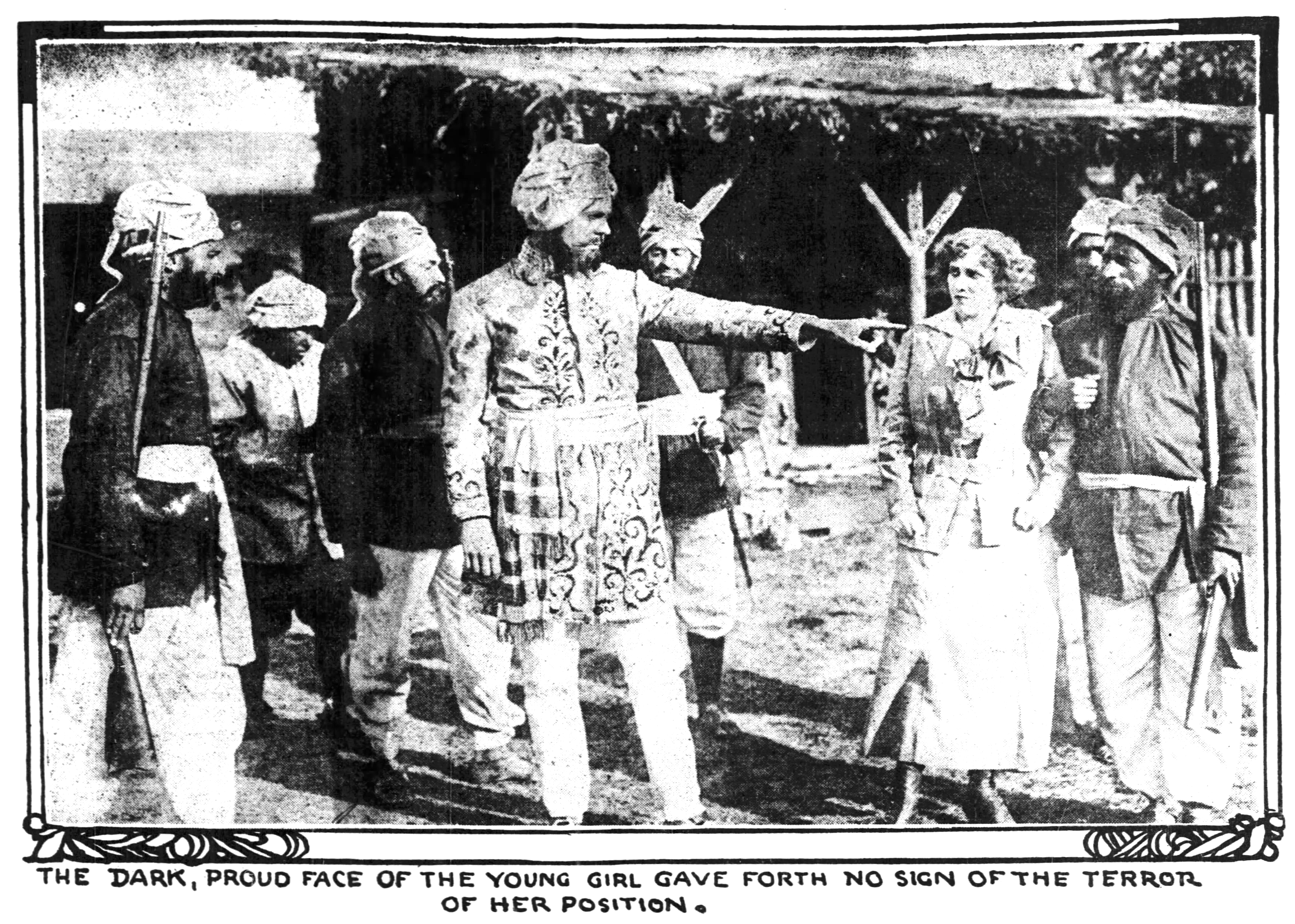 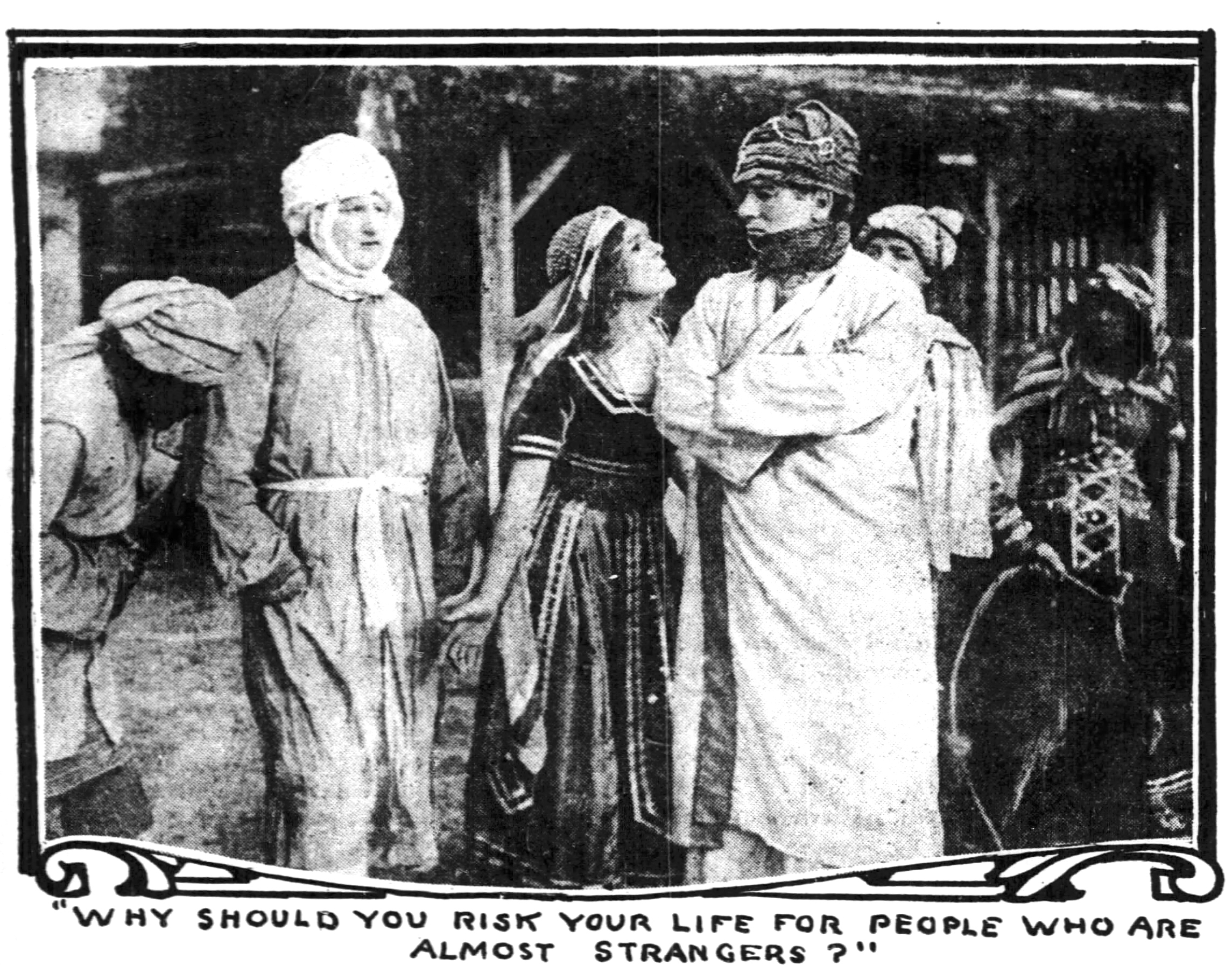 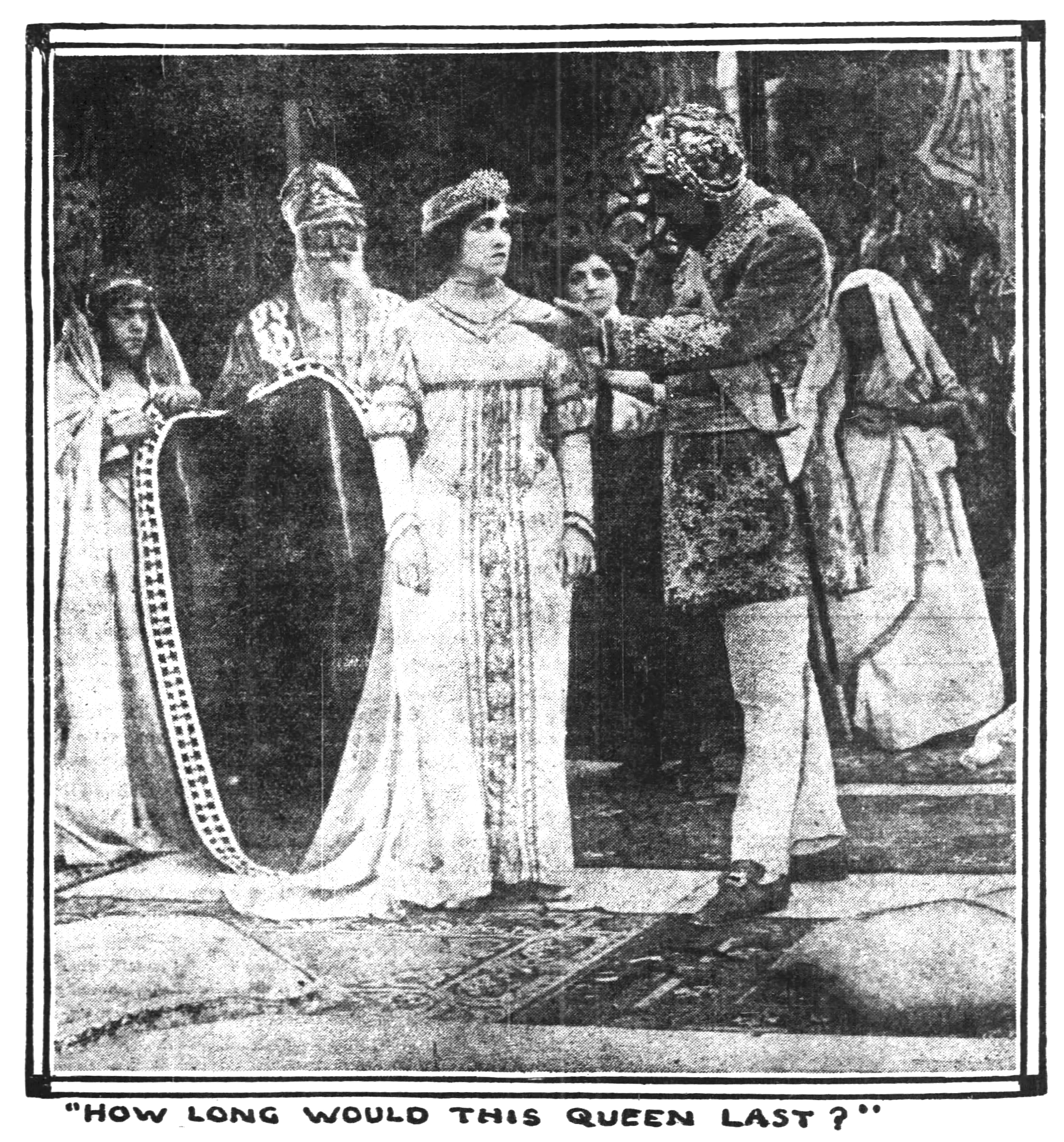 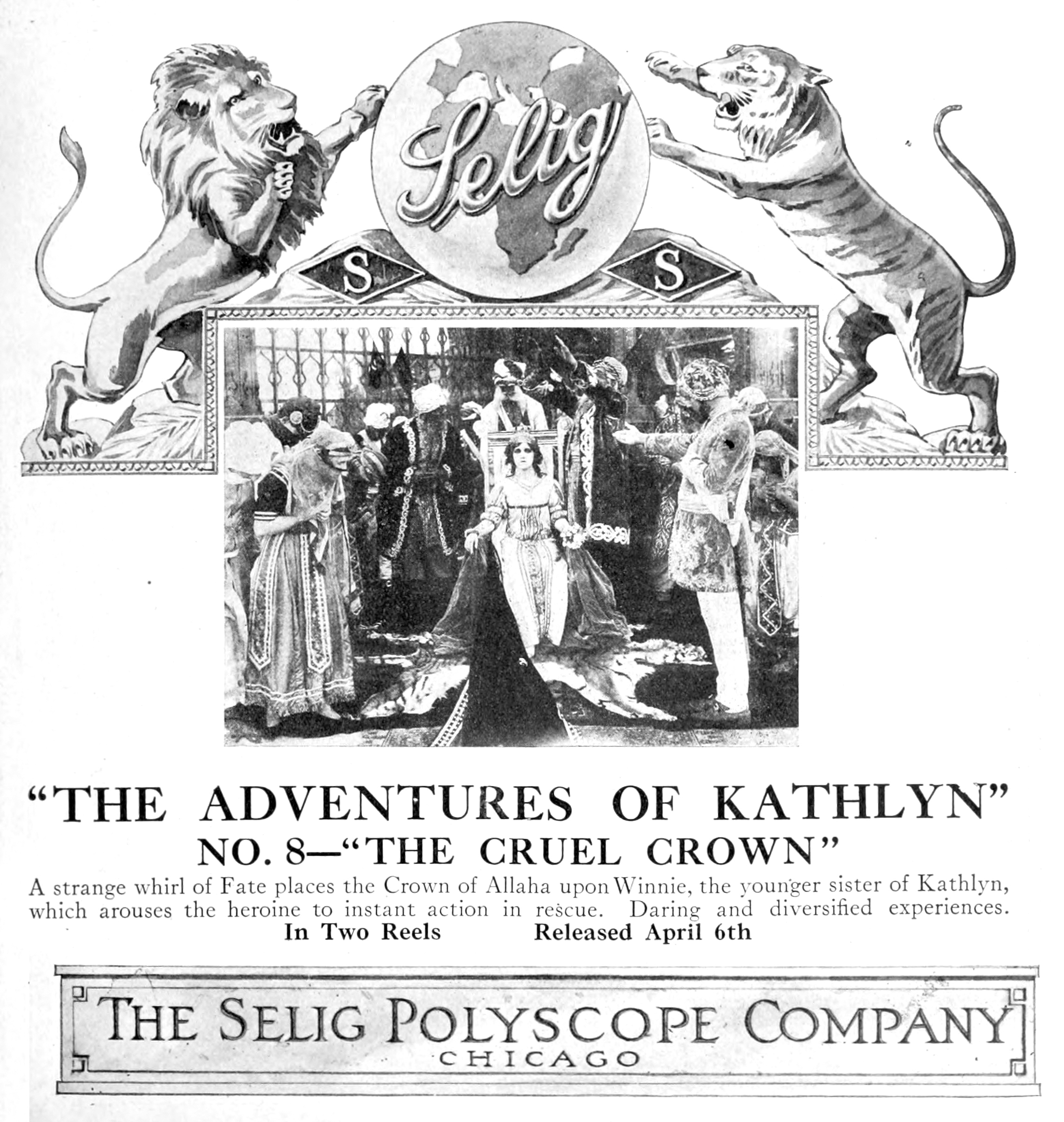