Nine months have passed since the Great Fire, during three of which building was necessarily suspended, and already the new city has reached beautiful proportions. Hardly had the flames and the heat subsided when the district was thronged with teams loaded with lumber for the erection of temporary buildings. The first necessity for these having been satisfied, the district then swarmed with laborers delving amid the rains, some excavating the debris, others piling and cleaning the brick and stone, and thousands of teams were engaged in hauling off the rubbish. 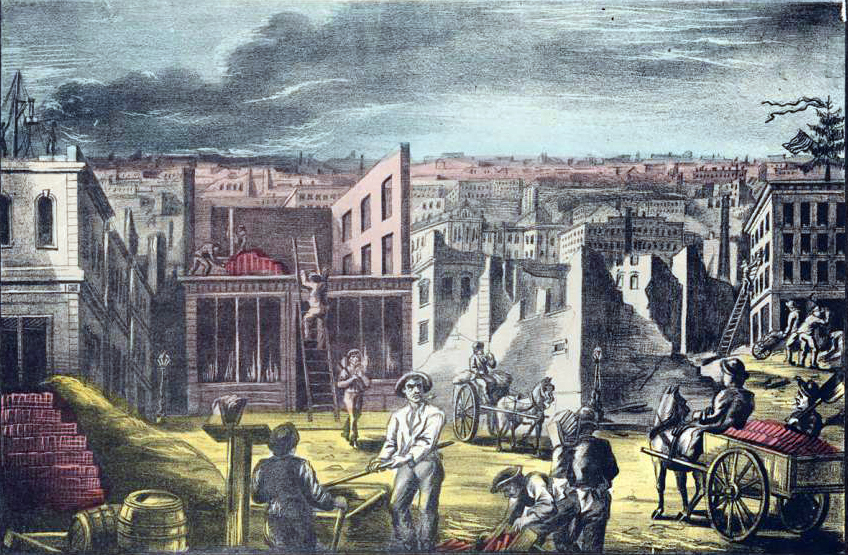 This work occupied all October and Novemnber. and until the snow prohibited its farther prosecution. During the same time hundreds of new foundations were laid, and a number of large warehouses and blocks were pushed ahead for immediate occupancy. Farwell & Co.. Field, Leiter & Co., and the Union Building Company succeeded in getting their immense establishments under cover before winter, and were, therefore, able to finish the interior for occupancy with little delay. Notwithstanding the severity of winter, labor was hardly suspended during the season. Though much out-door labor ‘was necessarily discontinued, other labor progressed, and, when spring opened again, the thousands who had been engaged during the fall were duplicated and triplicated. We question whether, at any time in modern ages, there have ever been so many men, mechanics and laborers of all kinds, and so many horses engaged at one time in building within the same area as have been at work in the burnt district of the South Division of Chicago: since the first day of May. The lineal frontage of the streets in this district, excluding the intersections, is in excess of twenty-six miles; and the area bounded and intersected by these streets has been covered with men and boys, and horses and wagons, and with building materials of every description. The derricks stand up all over this district like the masts of shipping in the crowded harbor. To a spectator it would seem, from the energy and the multitude employed, that nothing less than the eternal salvation of mankind depended upon having the entire district covered with six-story brick, or stone, or iron buildings before the anniversary of the fire; and that special places of honor among the elect are to be given to the builders in the order in which the buildings are completed. We do not wish it to be understood that a new building is in course of erection upon every lot in the burnt district of the South Division; but we do say that the buildings already completed and those now under construction will outnumber, as they will exceed in style, value, and solidity, the buildings which were destroyed by the fire in the same district. Neither do we wish it understood that the new buildings have been erected upon the old sites. This is largely the case; but many of the finest blocks in the New Chicago have been, and are now erecting upon sites which before the fire were covered with wooden structures, and in neighborhoods previously devoted to purposes other than commerce or manufacture. 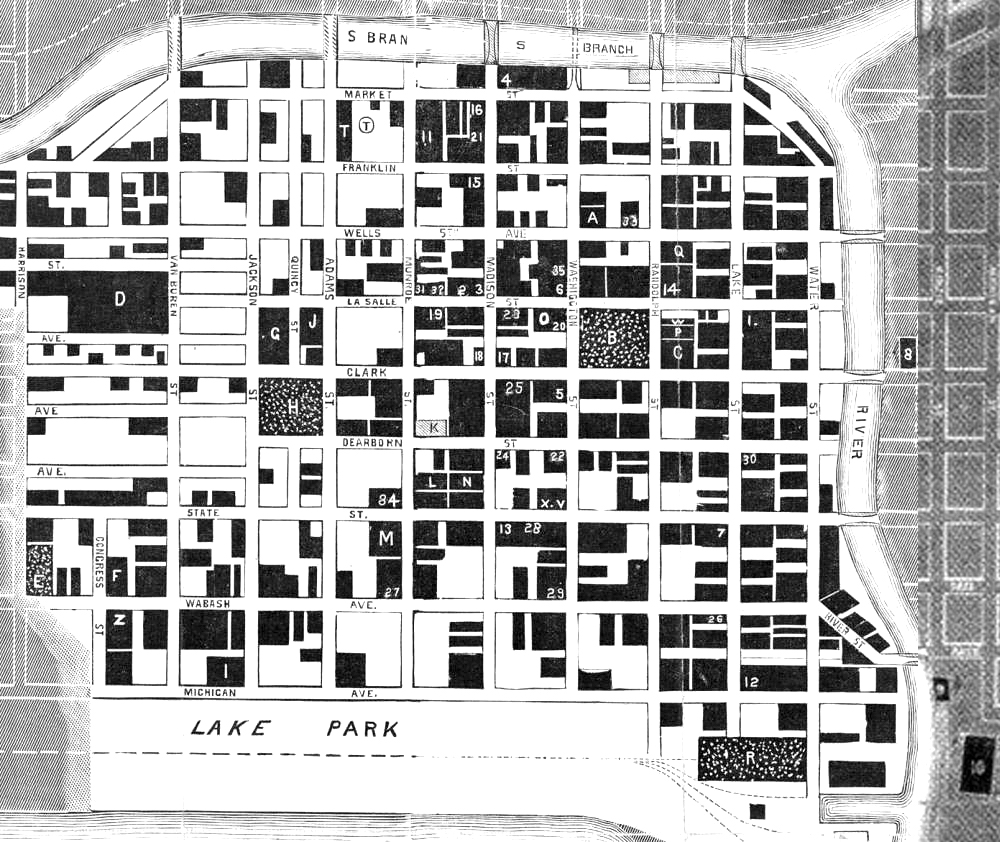 The lake front, or any portion of the South Division’s burnt district, are given. Wherever a building of brick, stone or iron has been completed, or even commenced, the area which it covers is shown in black, the white portion representing that portion of the South side’s burnt section upon which no rebuilding has yet begun. As the great interest in the work of reconstruction centers in the South division, or great business heart of Chicago, the diagram presents only that portion of the city.

While it is a physical, if not a pecuniary, impossibility to cover the whole of the South Division of the burnt district in one season, there is no man who can look upon what has been accomplished,and going on, without profound astonishment. The most enthusiastic believer in Chicago energy is unable to express even his astonishment at the wonderful creation that has taken place.

But this does not by any means relate all that Chicago has done in the few months that have intervened since the fire. In the North Division, the hand of labor has been industriously employed. Dwellings for 70,000 people have been erected, and, though the stores are not in proportion, numerically or in size, with those south of the river, much has been done even in this respect.

In West Chicago, outside of the burnt district, there have been, or will be this season, erected as many permanent buildings and blocks of brick, stone, and iron as in any previous season were built in all Chicago. From these facts some faint idea may be gathered of how many people have been at work in Chicago, and how much money has been expended. A striking incident in the history of this Chicago is, that the workmen have rejected every appeal to strike, and that the deposits in the savings banks have increased, since April, nearly two millions of dollars. 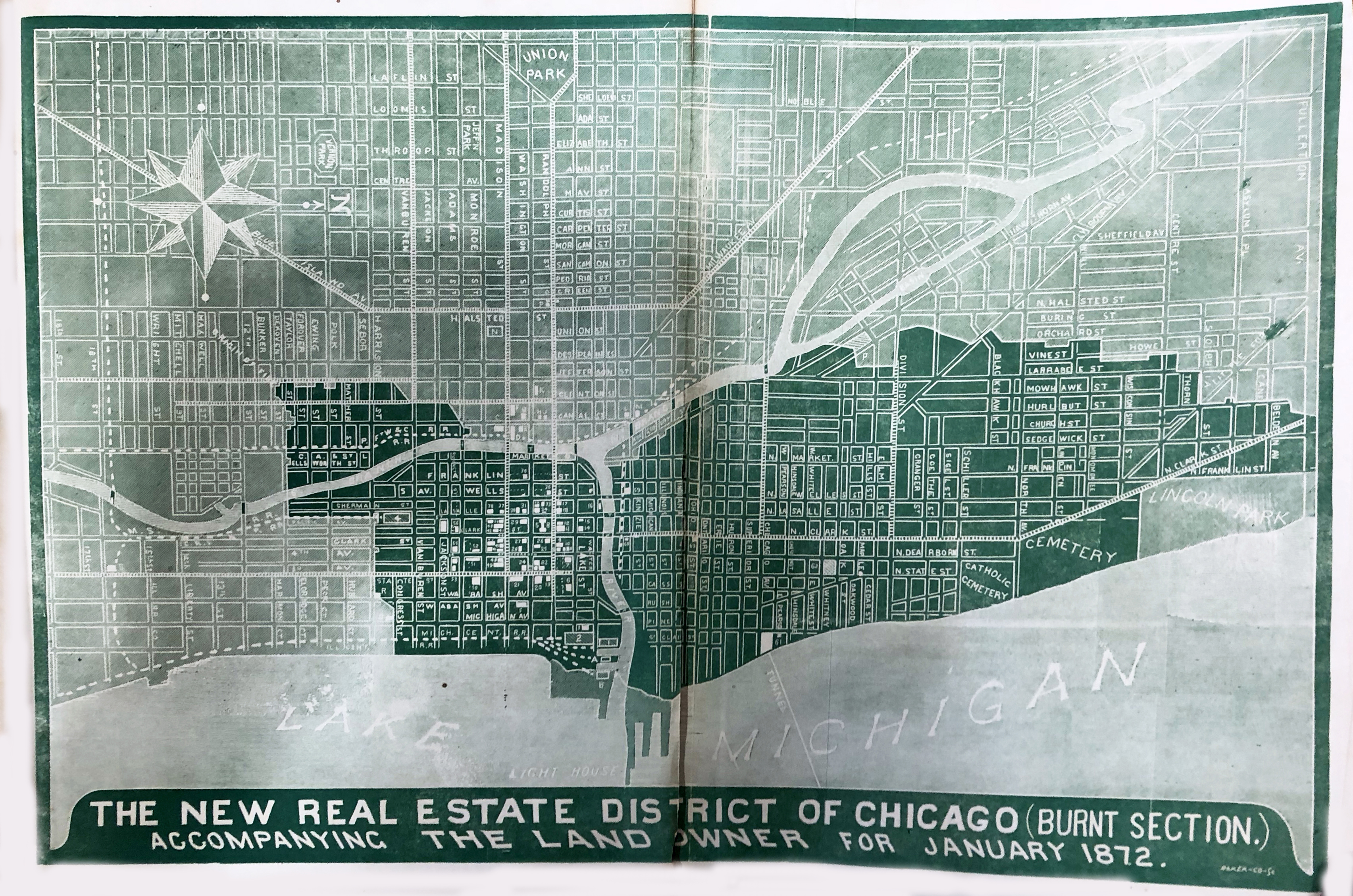 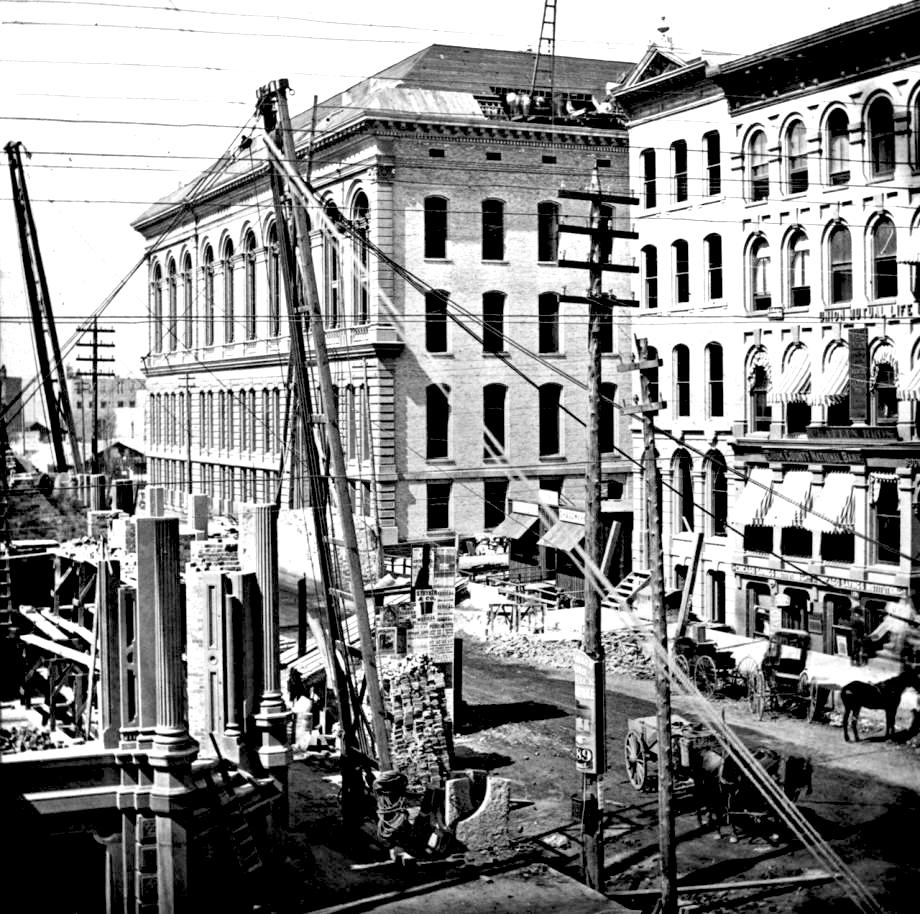 Notwithstanding this extra work, the ordinary business of Chicago has been unprecedented. We have received and shipped, or have on hand, more grain and more provisions than ever before; we have sold more goods for consumption in the city, and have added immensely to our sales to points outside of the city. Independent of the increase of trade in building materials, the business of 1872 will show that we have bought and sold 40 per cent more merchandise than in any previous year.

At no time has there been any scarcity of money for either commercial or building purposes. Any man who has a lot can get all the money he needs to improve it, and on easy terms, notwithstanding all that has been expended in building in this city. Money is now in abundance, far in excess of the demand.

Travelling in the burnt district is yet somewhat perilous; the streets are still crowded with building materials, and the sidewalks with derricks, mortar-beds, and the appliances of building; nevertheless, the new city is already advanced far enough to show that, when this rubbish is removed and the thoroughfares cleared of their obstructions, there will be built upon the burnt district of Chicago the handsomest, most substantial, and busiest city on the American Continent. 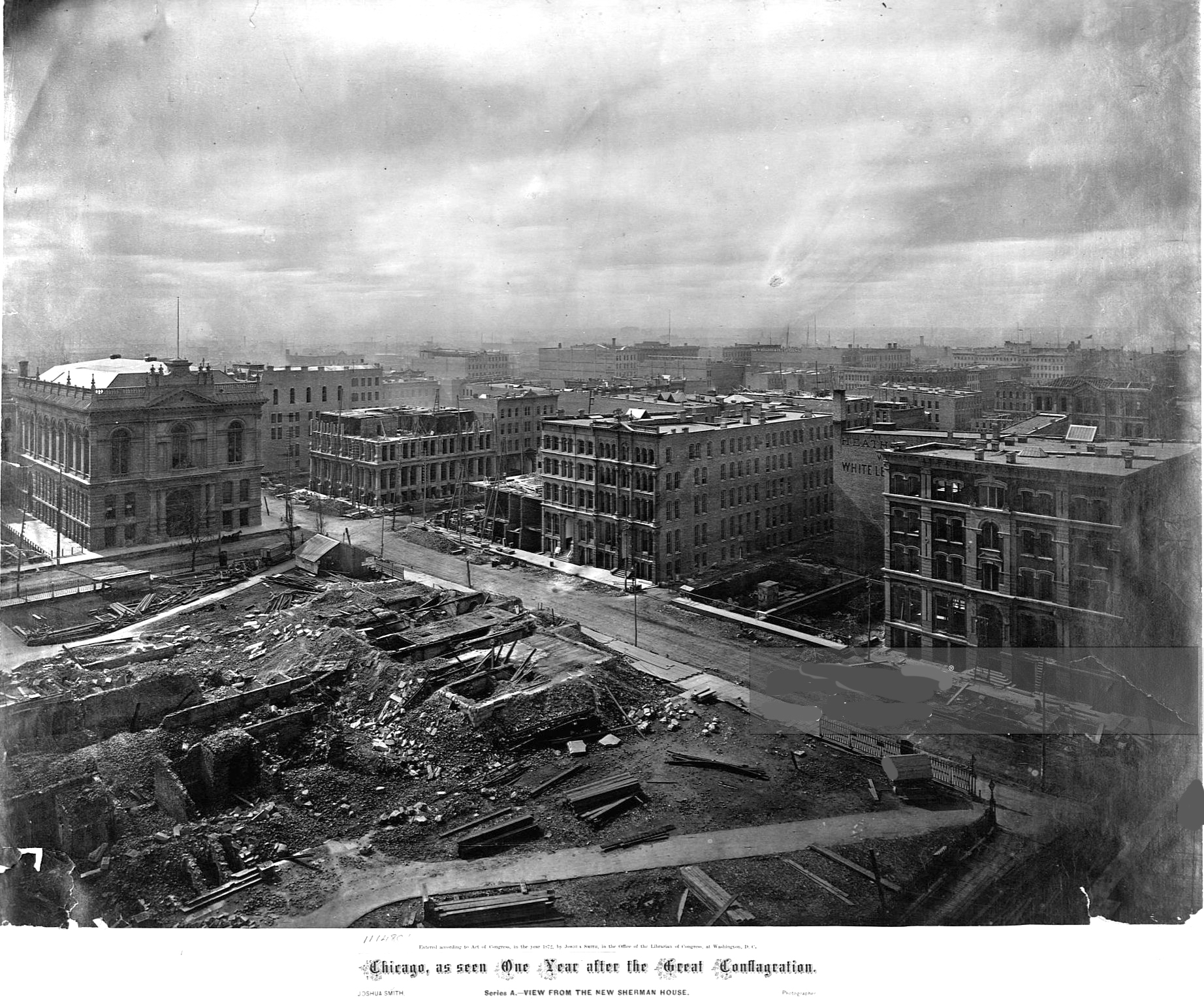 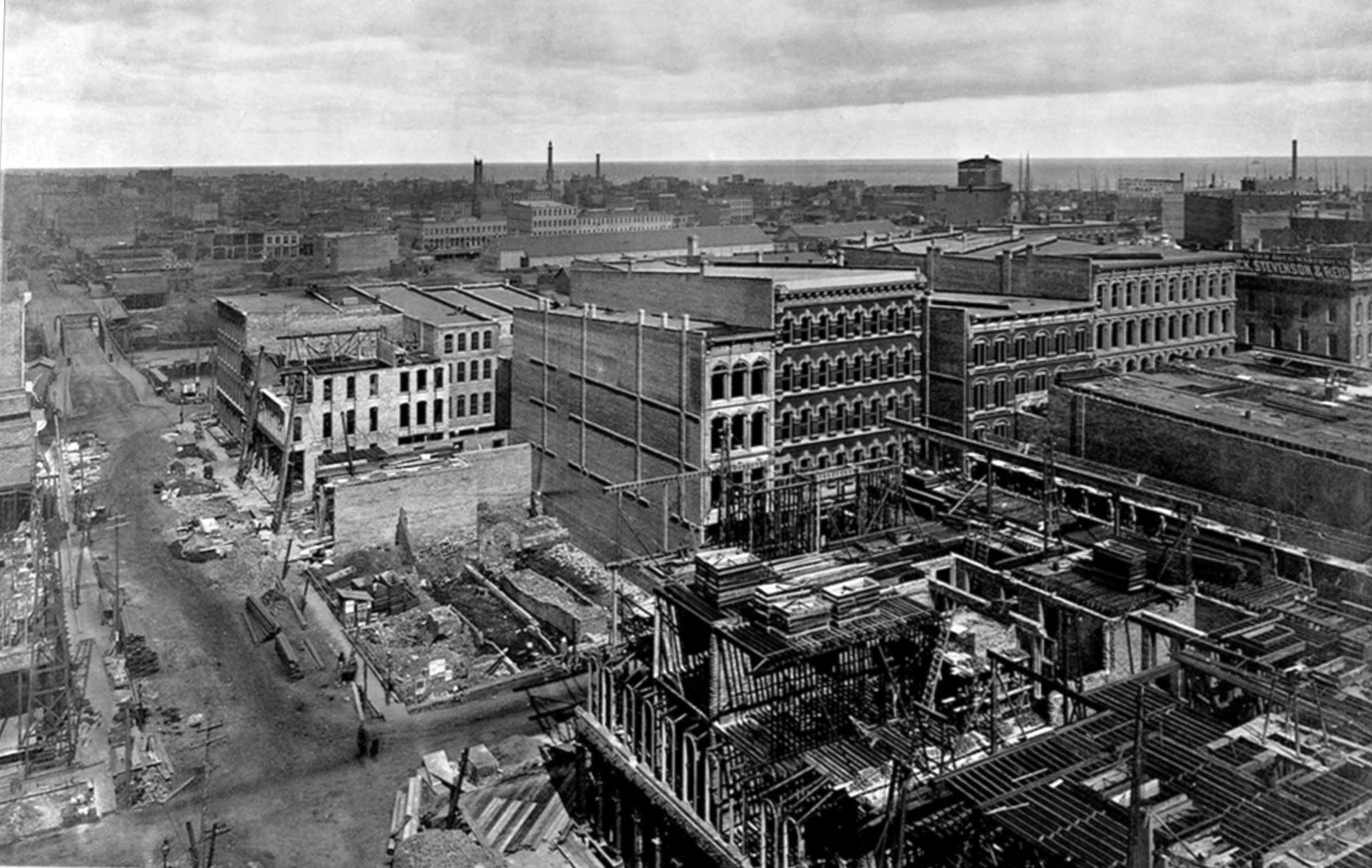 Joshua Smith, who photographed the Chicago Fire ruins panorama published in A. T. Andreas’ “History of Chicago,” also photographed the progress of Chicago’s massive rebuilding from the top of the Sherman House (NW corner of Clark & Randolph streets).

These two were taken one year after the fire in 1872. Joshua Smith’s studio was on Canal street.