We present, in this connection, an illustration of that remarkable enterprise which characterizes most of our real estate men, the new office erected by Wm. D. Kerfoot, Esq., on the site of the one destroyed in the fire, immediately after the smoke had cleared away, and before the smoldering ruins had cooled.

Mr. Kerfoot was so unlucky as to reside on the north side, and consequently his home was swept away, as well as his office at 98 Washington st. Caring first for his family, he next procured lumber, and erected the “Kerfoot block,” which we illustrate, put out his sign, bearing the expressive words, “All gone, but wife, children and energy,” and announced himself ready for business. Mr. Kerfoot was agent here for the estates of several non-resident owners. When they reached Chicago they were surprised to see him up and at work in their interests. He is now transacting business in this hastily improvised office, where he will continue until the old block is rebuilt.

We give this as an illustration of the remarkable elasticity with which our citizens have rebounded from the great blow. It is the same indomitable and unconquerable spirit that built Chicago on the site of a swamp. It is able to rebuild it, and it will. There are no grumblers or fault finders here except in the one instance of disappointment and chagrin of the knavish doings of the insurance companies. Everybody, and especially our real estate men, wear a cheerful face, and have gone to work to rear again their fortunes, this time on a surer basis, profiting by the sad experiences of the past. 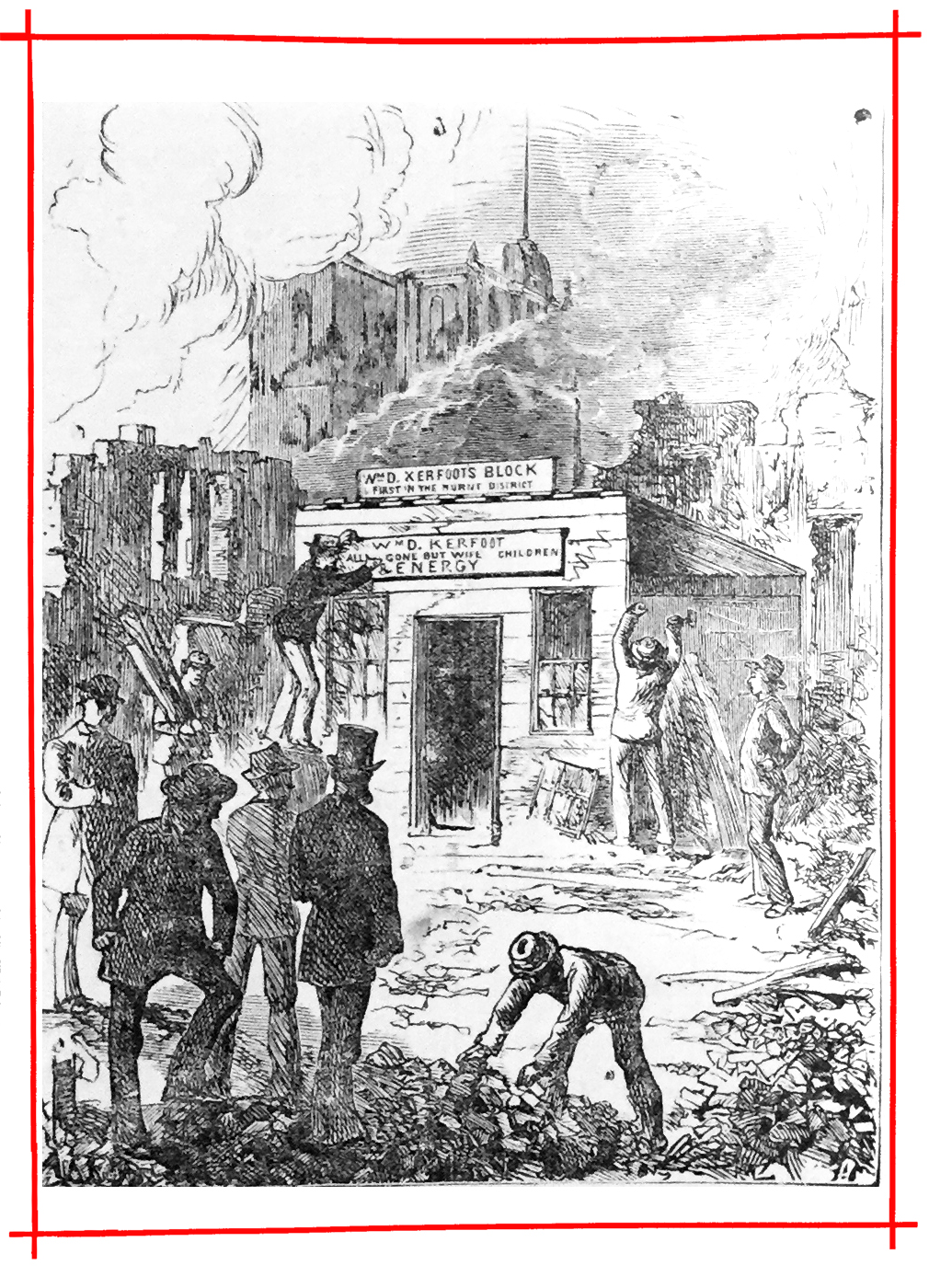 The first business structure erected on the ruins of former greatness was that put up by W. D. Kerfoot, the well known real-estate agent and operator. He lost all his worldly possessions of a pecuniary sort on October 9. On the morning of October 10, he repaired to the locality where he had formerly conducted business, on Washington, between Dearborn and Clark streets, and with the assistance of his clerk and his clerk’s father, had, before noon, erected a twelve by sixteen shanty of boards, and was ready to resume business Surmounting the structure was a board bearing the words, “Kerfoot’s Block,” and on the building a sign:

W. D. Kerfoot.
Everything gone but wife, children, and energy.

The ruined walls around were too hot to permit the building of the shanty within the line of the sidewalk, and it was put up a few feet from the pavement, in the middle of the street. Here it stood until October 19, when, the ruins around having sufficiently cooled, the Board of Public Works required Mr. Kerfoot to move his “business block” back, within the street line. He continued to do business here until the following June, when he removed to permanent quarters. The enterprise and pluck displayed in the erection of the board office did not a little toward reviving courage and drooping spirits. The comical features of the situation appealed to the humorous sense of the passers-by, and their attention was for a time diverted from their own losses and misfortunes. The office soon became a “halfway house” between the South and West Divisions, and a sort of general headquarters. In front of the building was placed a long board, covered with notices of removals, etc. a sort of extemporized city directory and this circumstance, added to the general character of the place, made Mr. Kerfoot’s office a general “Bureau of Information.” Hackmen, seeking to learn the address of the person at whose residence or place of business they should leave a passenger, drove by the building to get information which might be more easily obtained there than elsewhere. 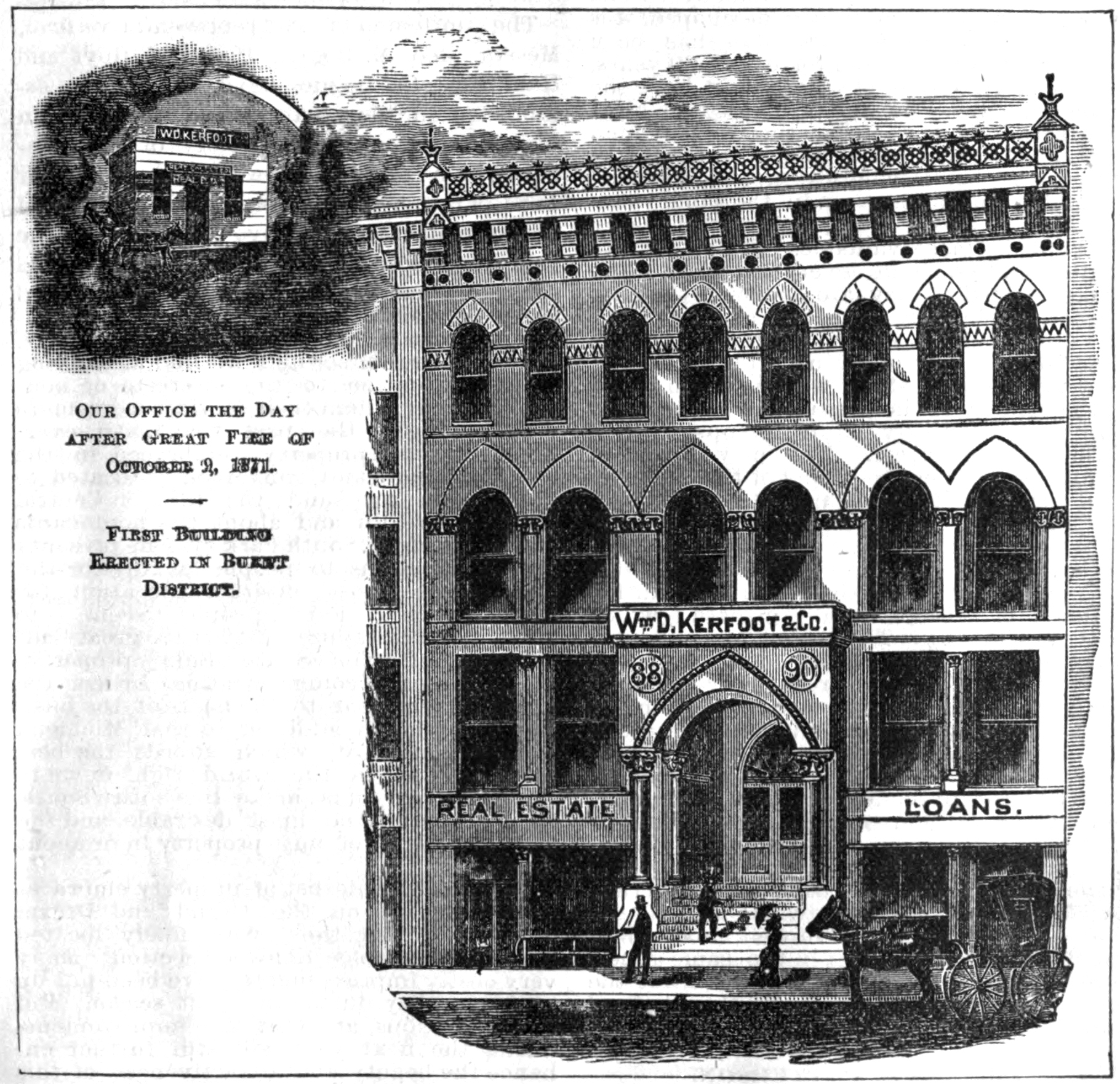 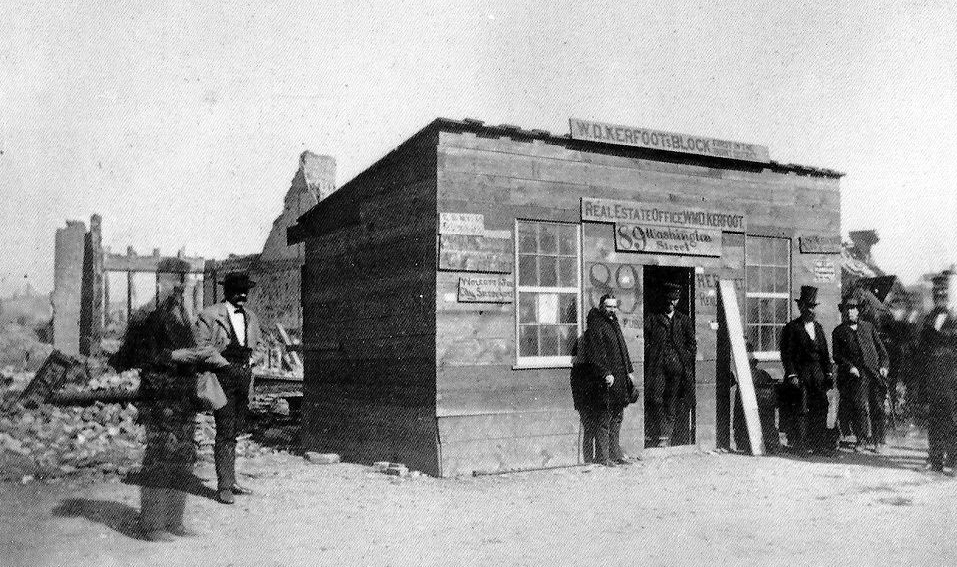 WM. D. KERFOOT & CO.
CHICAGO REAL ESTATE AGENCY.
If architecture is “frozen music,” the accompanying illustration, which explains its own sharp” contrast, will sing eloquently and truthfully of real estate and loan brokers sans peuret sans reproeh— a house established twenty-one years ago, a house foremost in deals, a partnership of gentlemen—Messrs. William D. Kerfoot, William A. Merigold, George Birkhoff, Jr., No. 90 Washington street. The parties, estates, and corporations represented where are they not found? And wherever found, they are clients still or friends. Asked to name the real estate house of Chicago, who that is well informed would not say, “Wm. D. Kerfoot & Co.?” 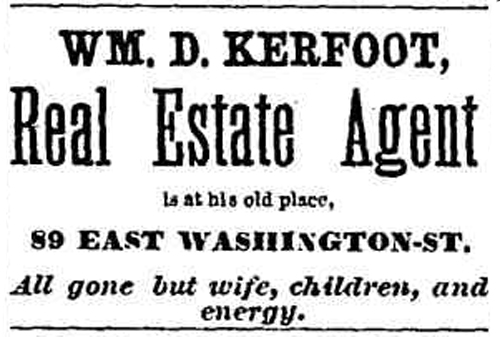 We put up a board in front of the shanty with a sort of directory printed on it, and nearly everybody coming to the city consulted it to find where the people were they wished to see. The shanty was army headquarters for a time. All the surveys of the burnt district were made from that office, re-establishing the lot lines and street lines.

It is impossible to compare the city now with what it was then,” said Kerfoot, reminiscing about pre-fire Chicago. “There were no substantial buildings then, no fire walls, nothing over six stories high. Most structures were of wood. While it was a calamity at the time, the fire turned out a blessing in disguise, for it set Chicago ahead in building certainly fifty years.