THE BRIGGS HOUSE
Messrs. Wentworth & Woolworth on yesterday purchased the Laclede Hotel on Madison street, near the bridge, and have christened it the “Briggs House.” It is already in full blast.

BRIGGS HOUSE
The Briggs House, an old and trusted friend of the transient visitors and permanent boarders in and around Chicago. has risen again, smiling, as the pugilistic records have it, none the worse for the encounter. The Briggs House was always a favorite hotel, and in the new city it doubtless will continue to be so. It is situated on the corner of Wells and Randolph street, upon its former site, and has risen to the imposing height of six stories above the basement. It fronts 81 feet om Randolph street, 143 feet on Wells, the former facade being of stone and the latter of pressed brick, with stone trimmings. It is remarkable throughout for the nicety of its details, and the home-like comfort it prepares for its guests. Messrs. Moss & Reid, in building the hotel have displayed unusual talent for providing necessities, and a charming appreciation of cosiness. This is especially noticeable in the bedrooms, which, running in suites through the whole building, are fitted up with marble mantels, and open grates, rich heavy central chandeliers, and luxurious appointments. On every floor is a series of well-arranged water closets, proper mechanical contrivances for the housemaid’s unpleasant duties; light, ventilation, and warmth, better than which no one could wish. The basement is delivered up to bath rooms and cellars, connected with the culinary department. The main floor contains the office, lighted from above with a spacious skylight, the cloaking-room, barber’s shop, bar-room, and baggage-room. There are two main entrances leading to the main hall in which the office is situated, both on Randolph street, one for the ladies. These are both commanded, so to speak, by the office. The passenger elevator between them is also observable from the same period. 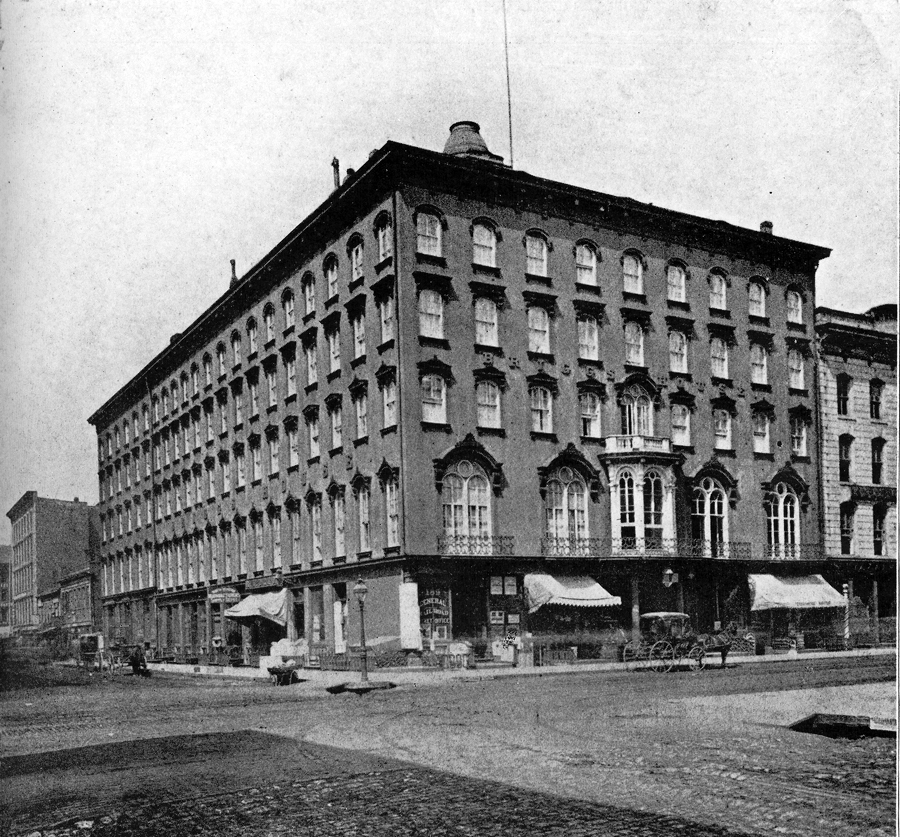 The arrangement of kitchen, dining-rooms, and parlors is all that can be desired—more care having apparently been taken with the internal economy of the house than the appearance, though the latter is agreeable and plain enough. The cost of this hotel will, when completed, be about $250,000, and will be rented by Messrs. Woolworth & Wentworth.

THE TWO BRIGGS HOUSES IN COURT.
Wentworth & Woolworth, proprietors of the Briggs House, corner of Canal and West Madison streets, yesterday filed a bill in chancery, in the the proprietors of the Briggs House (new), corner of Randolph and Wells streets, to restrain the latter using the name Briggs House. They show, as good cause, for the injunction, that baggage, express parcels, letters, telegrams, etc., representing large sums of money in the shape of hotel-charges, are being taken to the newly-opened hotel, in the belief that the Madison street house has ceased to do business. It is well known that the ground on which the original Briggs House was put up was given for the purpose of erecting an hotel, to be forever known as the Briggs House, and that it was so up to the time when the fire, the great leveler, burned down the hotel, and the owners removed to the West Side, where they took the name with them, baptizing the Laclede Hotel with it. A temporary injunction was granted.

1871 map showing the proximity between the Laclede Hotel (blue arrow) and the Briggs Hotel (red arrow).

The Briggs House has been sold by Frank Upman, its present lessee, to Mary E. Gwynne and Catherine Gibbs who own the ground. The building will be continued in use as a hotel under the management of Mr. Upman, the price paid for the building is $90,000. Its cost some twenty years ago was $120,000. The difference represents the depreciation owing to wear and tear.

Extensive improvements are contemplated by the purchasers of the structure preliminary to the World’s Fair reason. 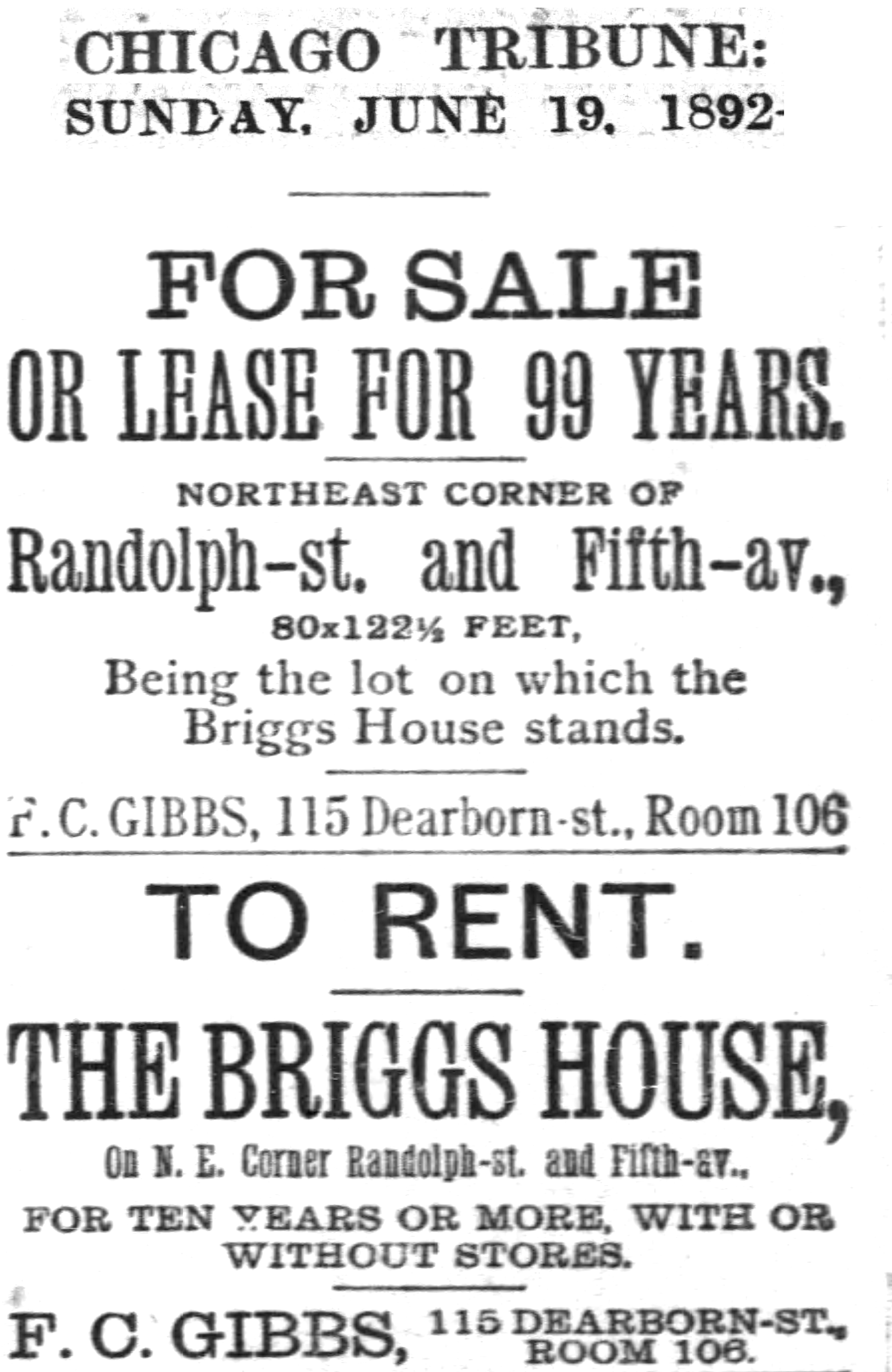 By this transaction a long series of fruitless negotiations reach a close. With the expiration of Mr. Upman’s lease on the property, the Briggs House property came on the market as one of the best available building sites. All sorts of rumors have been circulating as to the final disposition of the property, which are now set to rest.

Some Future Changes.
The property is located at the northeast corner of Randolph and Fifth avenue, the frontage being 80 feet on the former by 142 feet on the latter street. The building is six stories high and is a substantial structure. The wear and tear of the twenty years’ life of the hotel has the told on the interior, and a general remodeling would work great improvement.

It is possible that within the next five years the building will be converted into a mercantile and office structure by methods similar to those applied in the reconstruction of the Marine on Lake street. 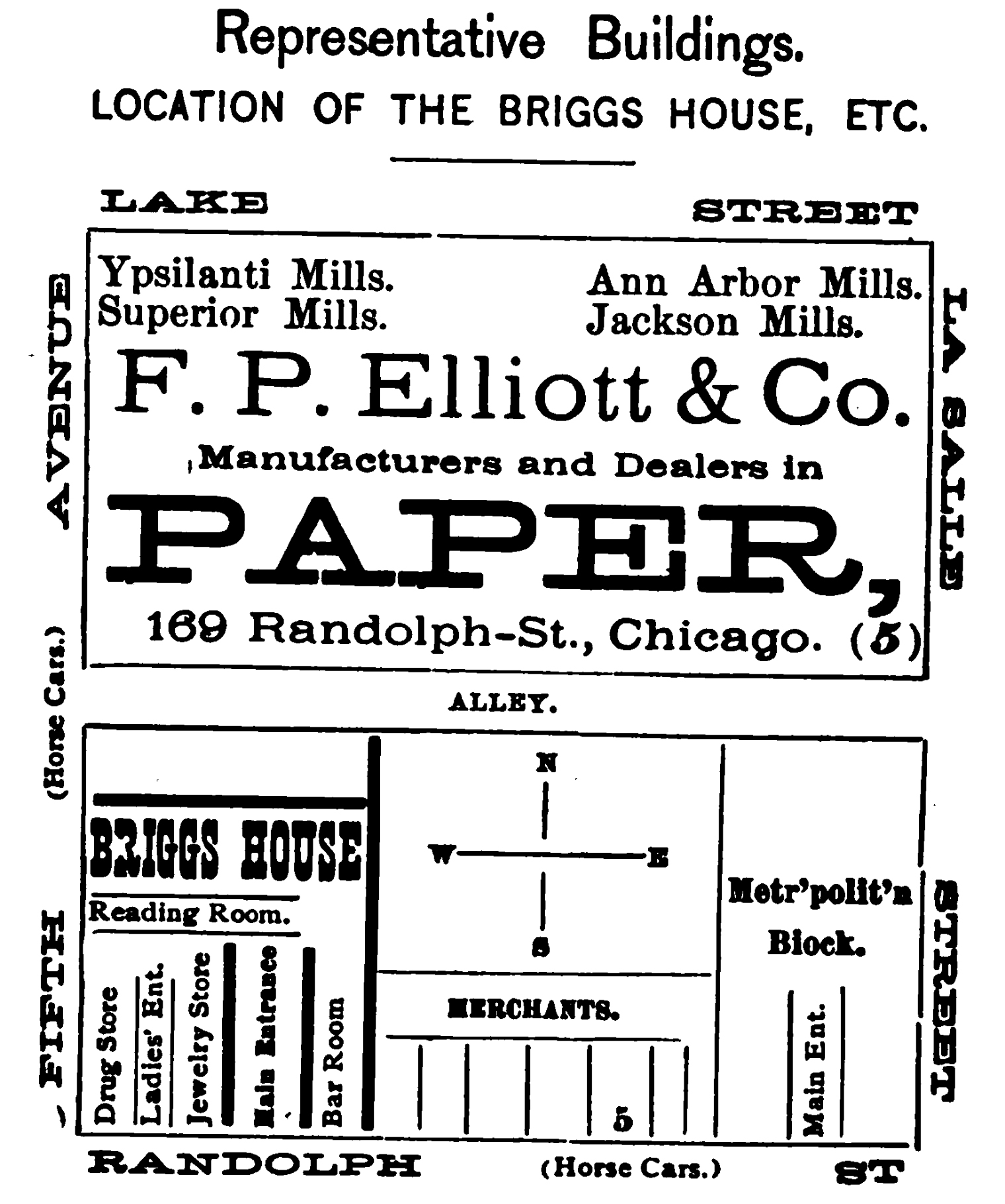 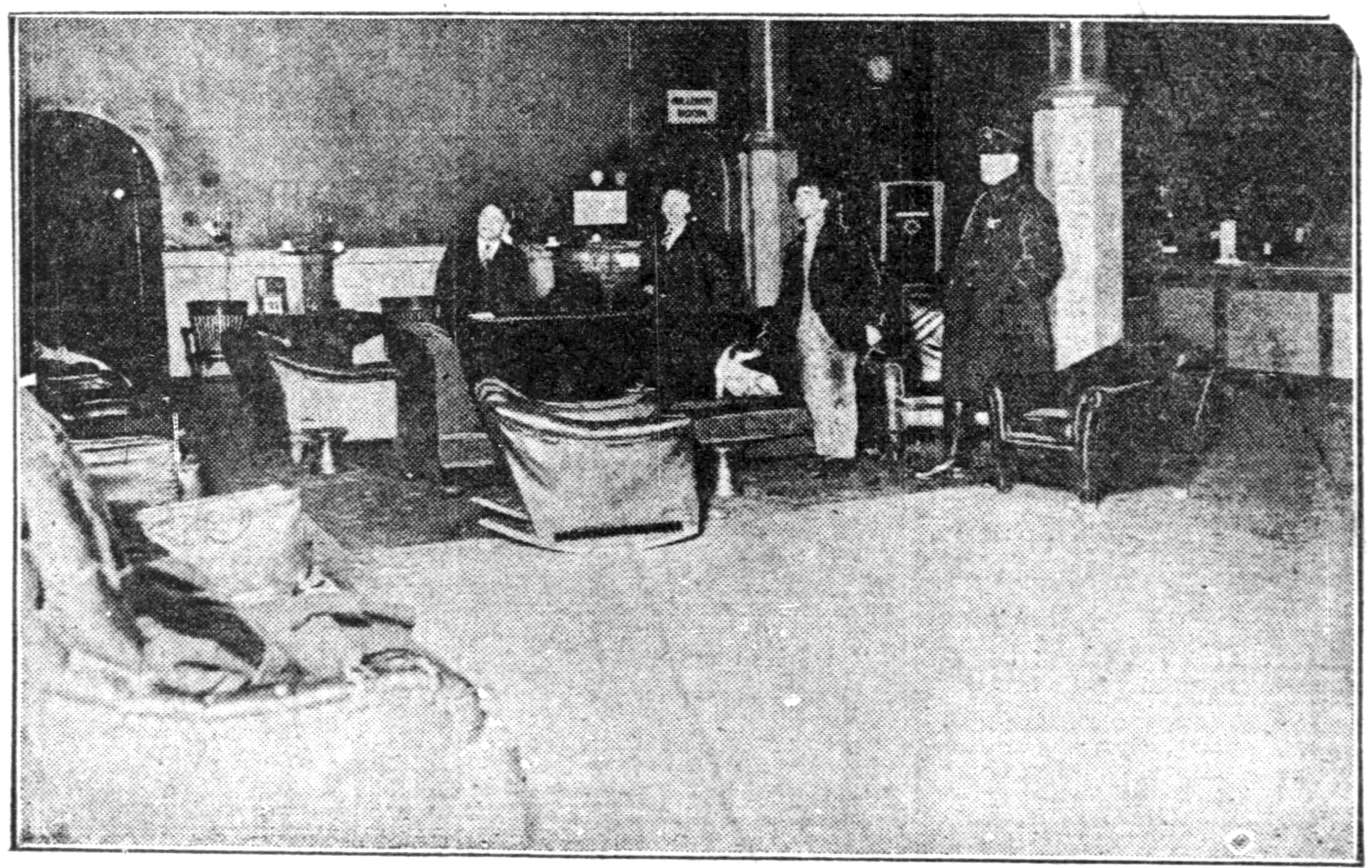 BRIGGS HOUSE CLOSES ITS DOORS AFTER 75 YEARS.
View of the lobby in the old building which will be torn down to make way for new club house of the Stuben society. Left to right: Sander Brichta, druggist; W. W. Seward, house detective; Thomas Dolan, engineer; Policeman E. H. Opper. 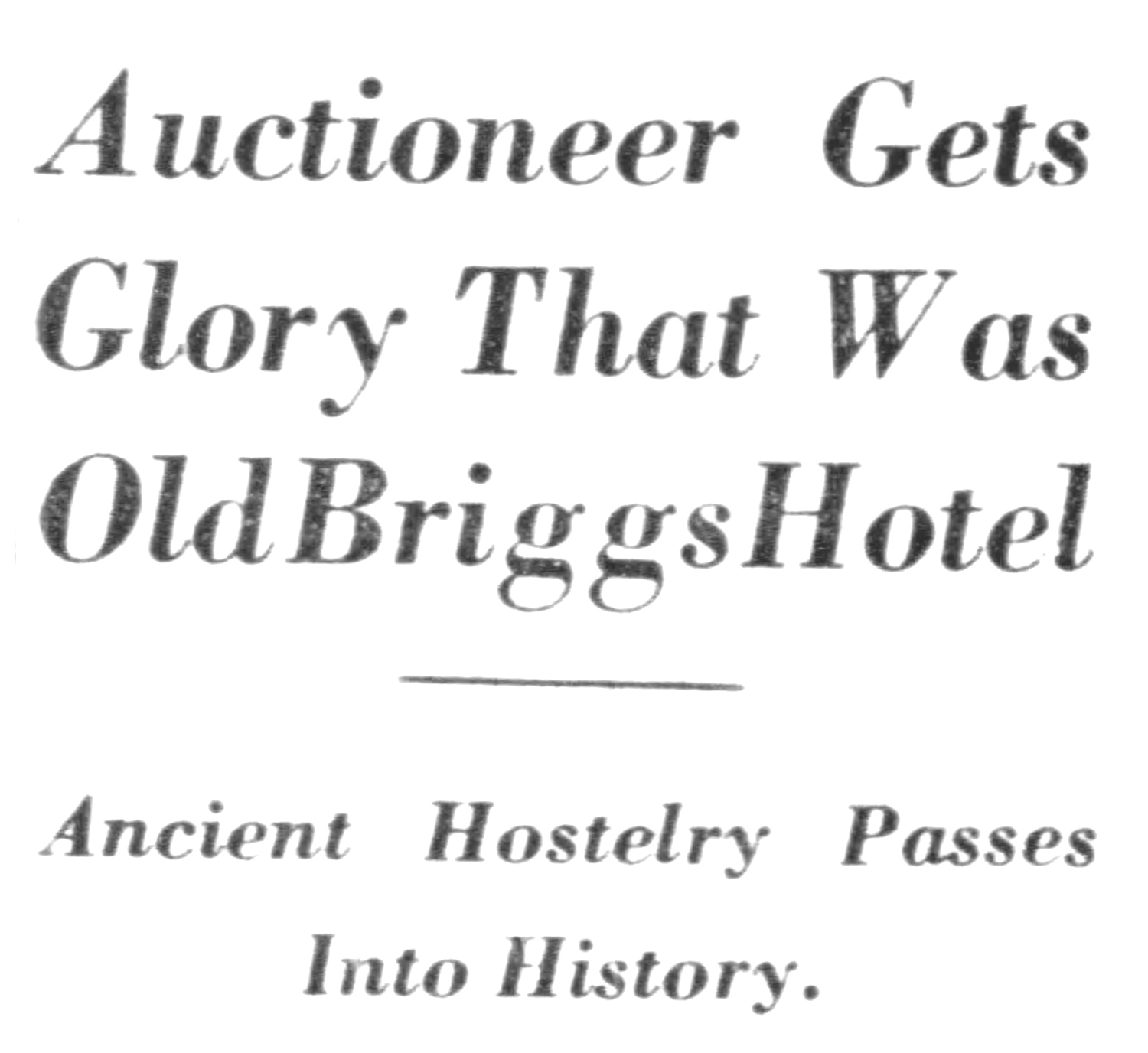 From the rear door of the old Briggs house on Wells street yesterday came their dusty furniture of the venerable hotel to be loaded on trucks and taken to the auctioneer’s warehouse.

Like strange anachronisms, the huge walnut dressers, the great old oak chiffoniers, the black walnut leather armchairs stood on the sidewalks, ready to be moved. Red plush sofas, wooden bedsteads higher than present day ceilings, and white, marble topped washstands, old carpets and rugs were put into the vans. It was, in a way, like carrying out the history of Chicago.

Since the first Briggs house was built at Randolph and Wells, in 1852, the old hotel has had a part in Chicago history, and in even in national. Abraham Lincoln had his headquarters in Parlor A, and it was there he received word of his nomination for the presidency. The hotel had been the headquarters, too, for the first and second Carter Harrisons, and for years labor leaders and politicians made it their home.

While the auctioneer’s red flag was hanging over the door, to make the passing of the old hotel all the more final, someone dropped a cigar butt into the air shaft above the kitchen setting the grease into flames. With the smoke that poured out into the surrounding streets came the savory of roasts in Briggs house ovens for more than two generations. It was probably the odors of the buffalo steaks, venison chops, bear steak, and mallard ducks for which the old grill was famous.
‘
The Briggs house is being torn down to make way for the skyscraper which will house the Steuben club. 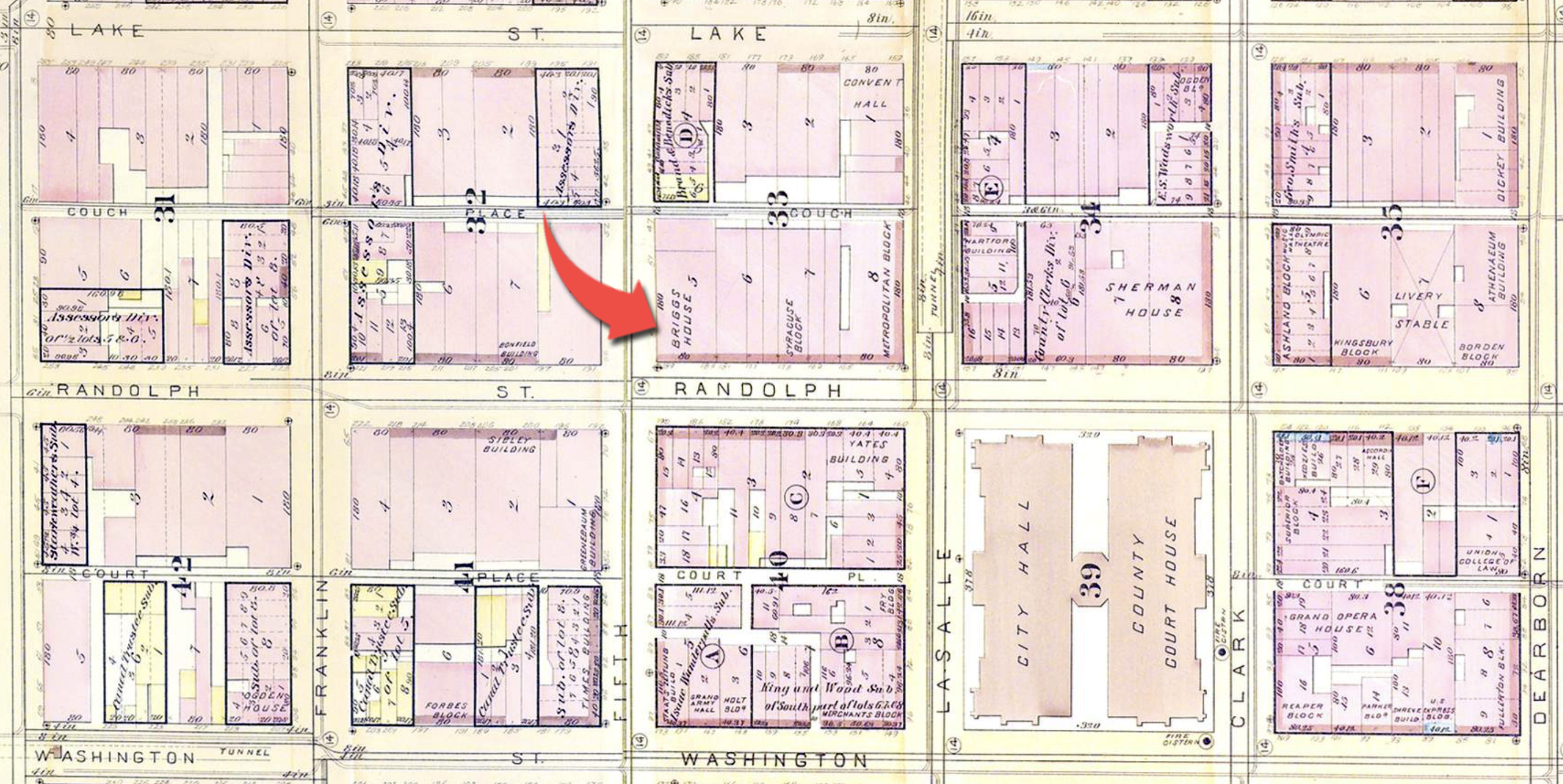 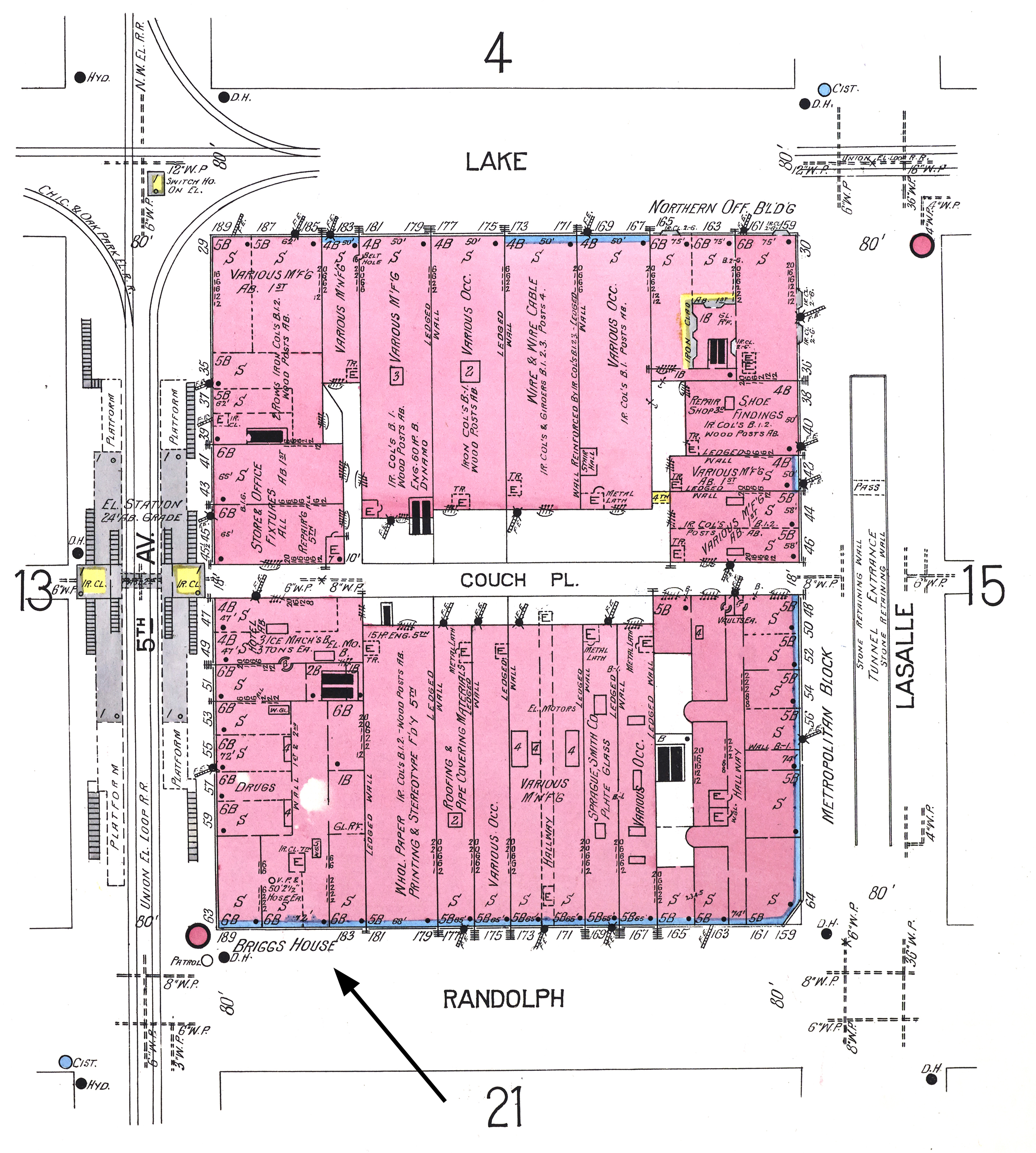