The Land Owner, December, 1873
THE PAGE BUILDING, WABASH AVENUE AND WASHINGTON STREET.
This magnificent block adds another ornament to Wabash avenue, to become one of our most and thoroughly built thoroughfares, and one of the feeders of the great South Side. It is 144 feet front on Wabash avenue and by 151 feet on Washington street, five stories and basement in height. The style of architecture is called by Mr. Van Osdel the French Renaissance. It is solidly built like all of Mr. Page’s buildings, and cost about $230,000. It is rendered as near fire-proof as possible by the introduction of all modern improvements throughout. The block is divided into two large stores, the partitions being of plaster of Paris castings. Steam freight and passenger elevators are in place, and the entire building is heated by steam in the most thorough manner.

Our illustration shows this edifice to be an admirable one in every particular, and a model for other builders to study. Mr. Page has succeeded in erecting monuments to his good taste and judgement in both this and his elegant State street building, referred to elsewhere. 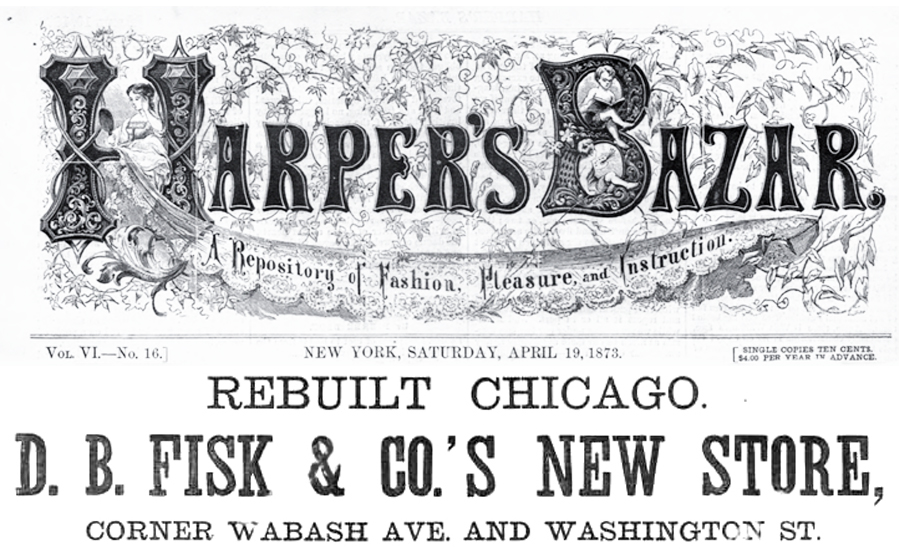 If the burning of Chicago was the world’s astonishment, its sudden rebuilding is a still greater marvel. To the Old World, the increase of wealth and population in the New appears incredible, while the unvarnished history of the growth of the great West-of which Chicago is the distributing centre-seems to the people of the older States almost fabulous. 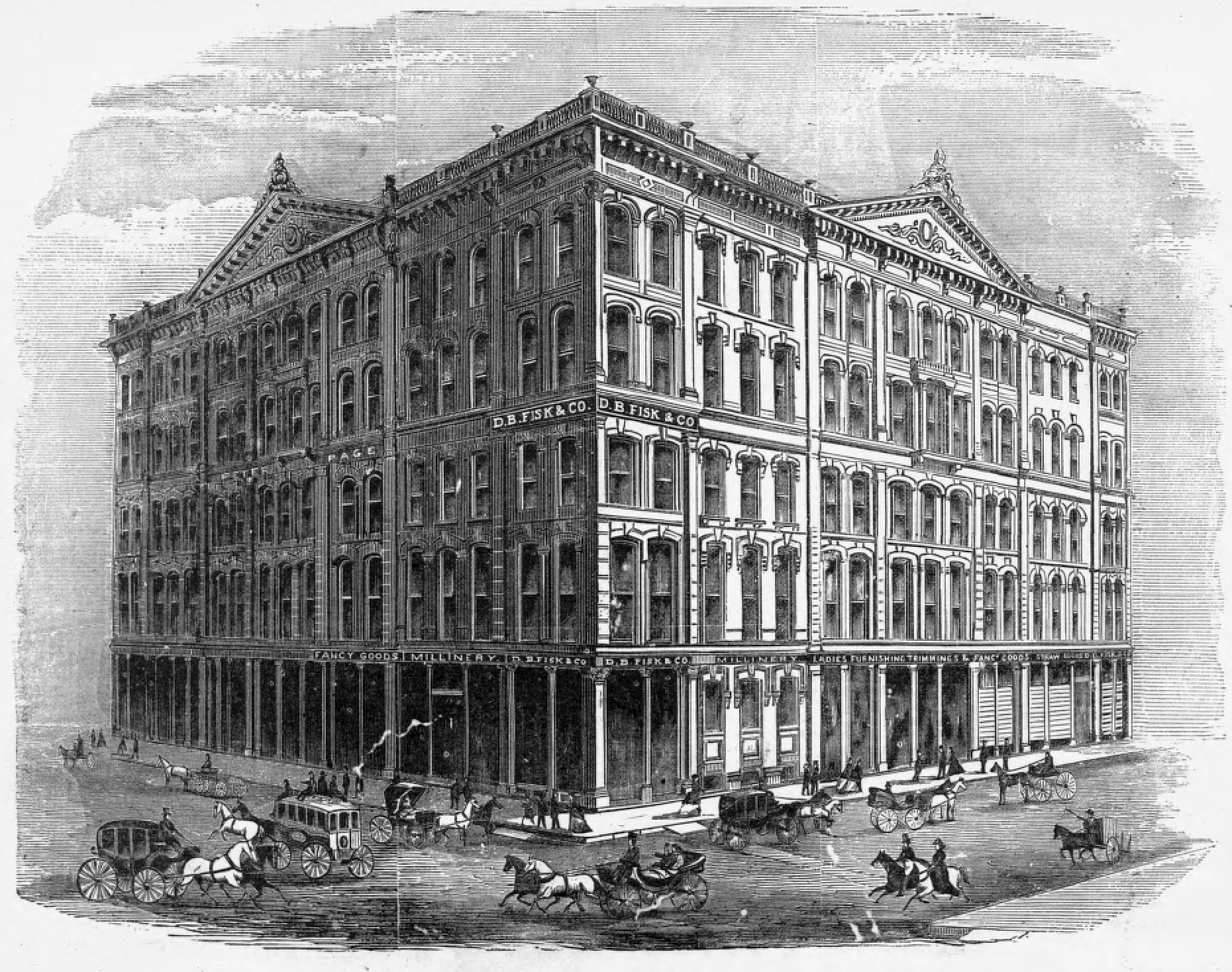 TIME ALLOWED FOR REBUILDING,
Ten years were assigned to Chicago as the shortest time in which she could replace her burnt edifices. But to-day, not eighteen months since the great fire, she has a larger area of substantial and elegant business-houses than she had before the fire, and ere the year ends—when the buildings now designed and in process of construction are finished-Chicago will be far more magnificent, beautiful, and complete than ever, with much larger, more convenient and elegant structures for business, art, religion, and home comfort, than any city of its size on the continent. This wonderful display of constructive energy is due to two causes:

CENTRAL POSITION.
1. To the position of Chicago as a commercial centre, at the head of our great inland seas, connected by navigable waters with the Atlantic and the Mexican Gulf, with tunnels under lake and river, the largest grain mart in the world, and the focus of a hundred railroads stretching out their Briarean arms to gather the products of the land and of the sea, of forest and mine, of anvil and loom, over a whole continent.

BUSINESS CHARACTER.
2. To the character of her business men, composed of the most enterprising citizens from every State, from Canada, and from Europe, full of electric energy, and inspired by the great possibilities here opened to capital, industry, and enterprise. Chicago could not be what she is without such business men, and the result of their united efforts is the New Chicago, the pride of her own citizens, and the wonder of all be holders, whose “name has gone out into all the
earth.”

D. B. FISK & Co.,
importers and manufacturers of and wholesale dealers in, millinery and straw goods, ladies’ furnishing and fancy goods, a representation of whose magnificent new store, on the corner of Wabash Avenue and Washington Street, is seen above.

BEFORE AND AFTER.
Before the Great Fire they had the finest millinery store in the West, a cut and notice of which appeared in the BAZAR. But the present building so far excels the former one in size, convenience, and splendor, as to make comparison useless. And its

LOCATION,
In the very centre of business, on the Broadway of Chicago, near the principal hotels and chief railways, makes it accessible to customers and an attractive point for visitors. The building, fronting on two streets, is

SUPERBLY LIGHTED
Throughout, the panes of French plate glass on the main floor being 7 feet wide and 15 feet high, so that not only is there ample room for the display of their immense stock, but every floor is so fully lighted that all their goods are shown to the best advantage for purchasers.

GENERAL DESCRIPTION.
The premises consist of six floors, finished from basement to roof in the most substantial and elegant manner, heated by steam and furnished with elevators for freight and passengers, and every modern convenience, so that the whole business can be transacted more easily than if the space was all on one floor. The Offices, Ladies’ Parlor and Toilet Rooms, on the main floor, are of black walnut and ebony, with rich carvings and plate-glass; and the grand massive stairway to the second floor

CHALLENGES ADMIRATION.
No expense or labor has been spared to combine Use with Beauty, and make the whole a perfect temple of art. Every accommodation and comfort are afforded to customers which an intelligent appreciation of their wants, prompted by a liberal hand, could provide.

On the fourth floor are the receiving and distributing rooms and duplicate goods. The fifth floor contains the manufacturing department,
with all the latest machinery for manufacturing hats and frames. The basement is used for entering, packing, and shipping goods sold, and contains the steam-engines, boilers, and machinery for heating and elevating goods and passengers.

THE PROPRIETORS
Began trade here twenty years ago, establishing the first exclusively wholesale millinery house in the Northwest, and by indefatigable industry, enterprise, sagacity, nerve, and fair dealing, from small beginnings have built up an immense trade requiring a building of mammoth proportions, and a small army of employés. They are now in the prime of life, and have justly won the honorable pre-eminence of having the largest and finest millinery establishment in the world.

LARGEST AND RICHEST STOCK.
Their stock is the most extensive and complete to be found in the country, and as they always keep the best class of goods, both as respects quality and style, their house, for a long time, has been the

HEAD-QUARTERS
of Fashion for the West. And Eastern parties going West to establish themselves in the millinery trade will desire to visit their establishment, not only to see on what a magnificent scale business is conducted there, but to post themselves as to the kind of stock adapted to the Western trade.

And no more fitting type, or truer representation, can be found of the wonderful growth, magnificence, and prosperity of the New Chicago. 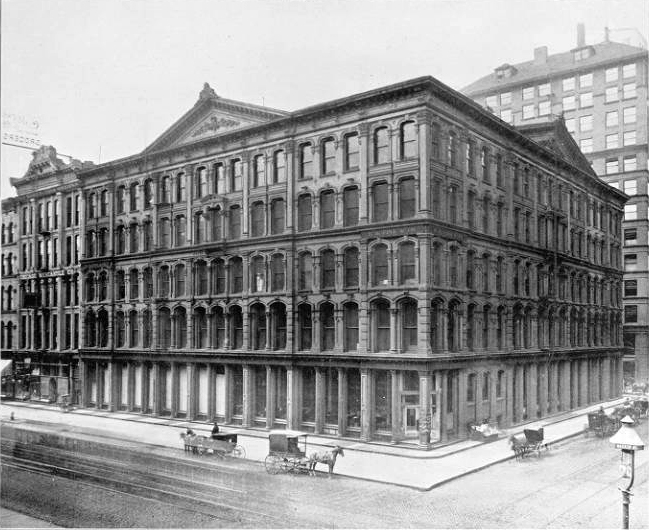 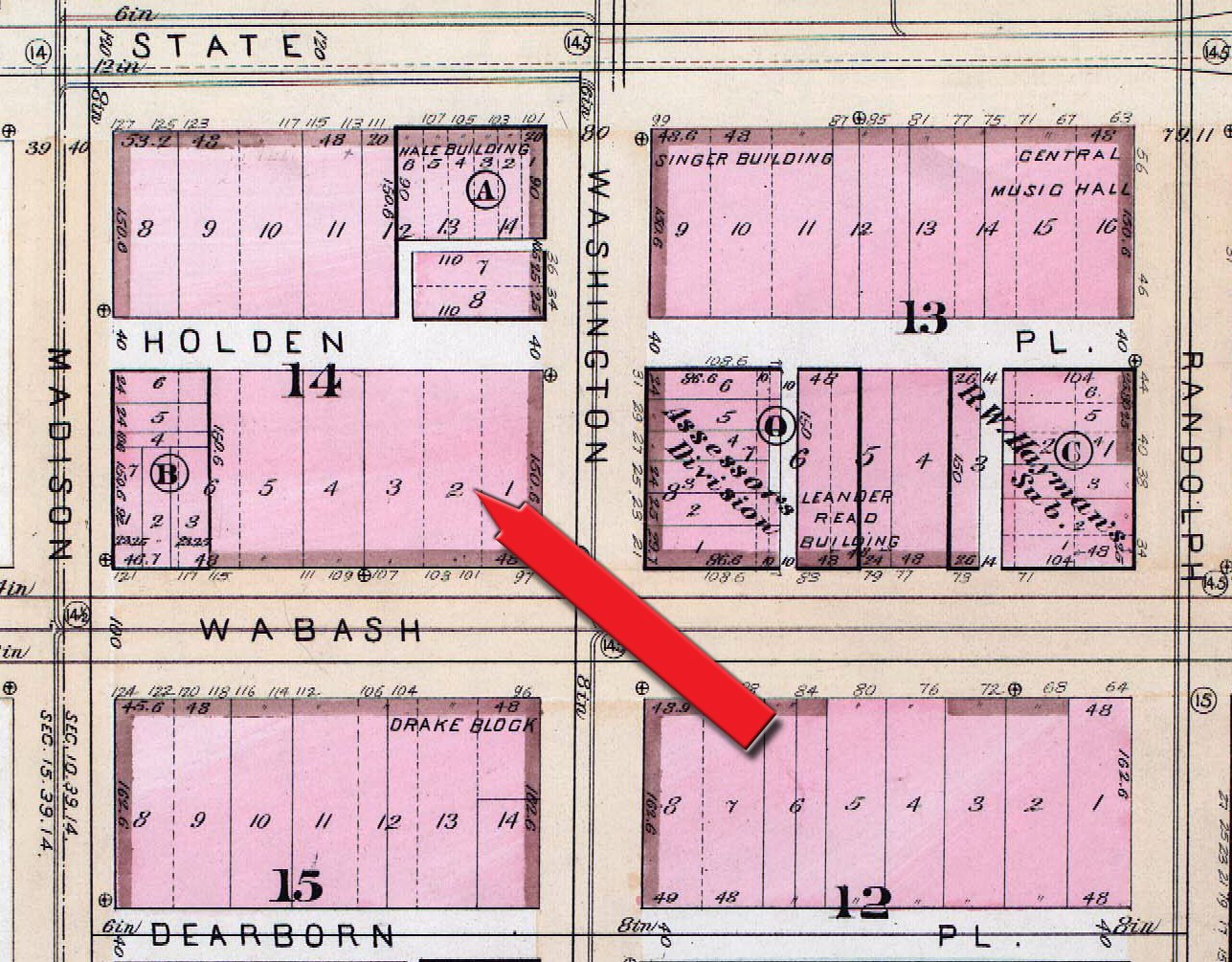 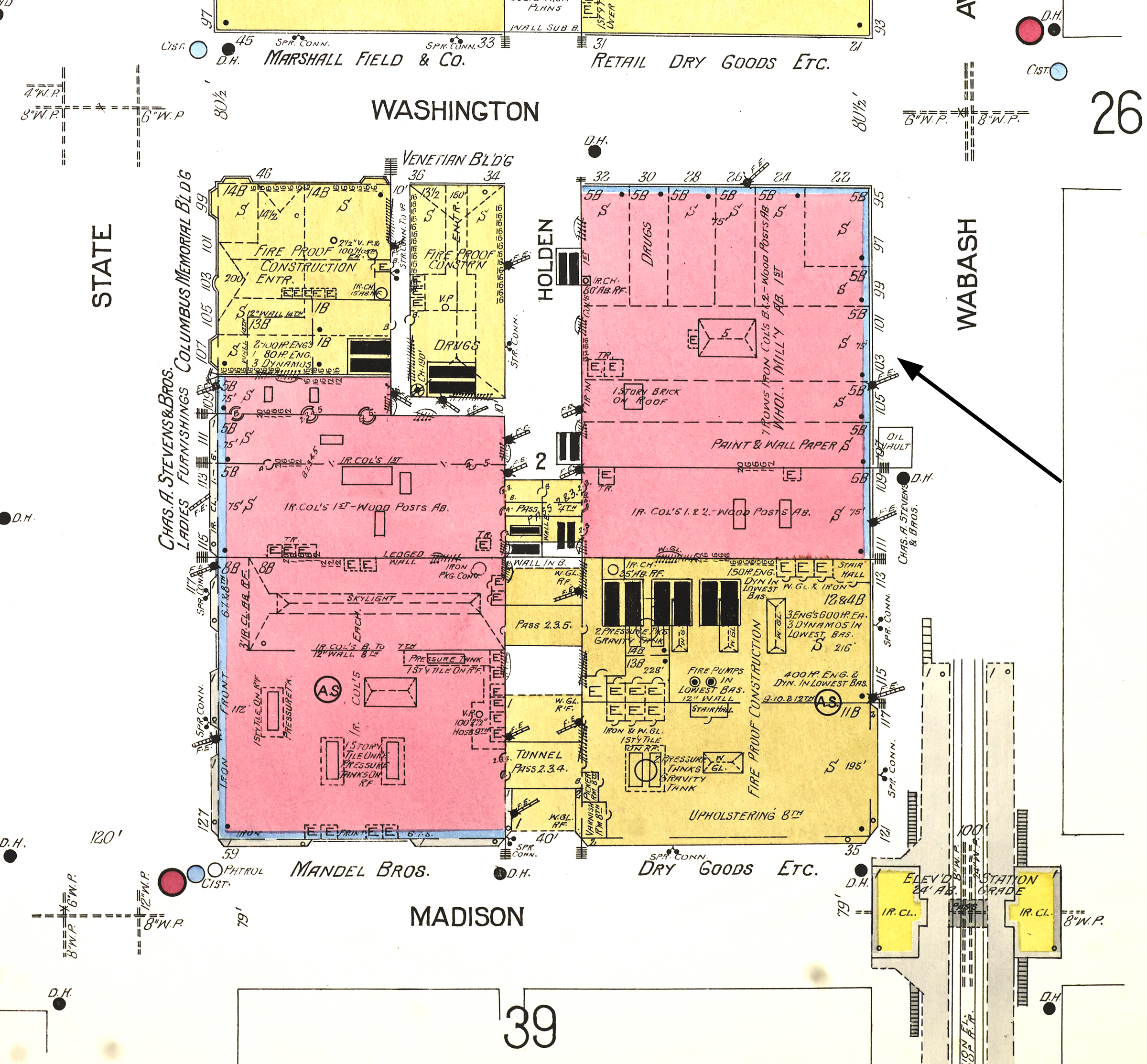