“It is a newspaper’s duty to print the news and raise hell”—Wilbur F. Storey, The Chicago Times, 1861

NEW BUILDING OF THE CHICAGO TIMES
With that degree of pride every true journalist feel the prosperity, success, and growing power of the press, we point our readers anxious to see Rebuilt Chicago, to the superb illustration on our title page of the magnificent building now being erected by W. F. Storey, Esq., as the future home of The Chicago Times, at the northwest corner of Washington street and Fifth avenue.

The building is to be constructed of a handsome white sandstone from the interior of Michigan, and will combine a modern adaption of English massiveness and French symmetry. It will have a frontage of 80 feet on each street, and an altitude of five stories above a high basement, towering over all surrounding structures. The general idea to be conveyed by the exterior is one of beauty, from the harmony of every detail, and excellent taste in the apportionment of ornaments, rather than in their profuseness. In this respect, it will appear that the heavier work is upon the lower stories, decreasing as the building assumes height, thus giving permanence and strength. The corner will be truncated, similar to the First National bank building. The basement will be 10½ feet in the clear, the floor of the first story being four feet above the pavement. This floor will be accessible by a grand entrance, midway of the building, on the Washington street side; by another leading to the passenger elevator and the compositors’ stairway, midway of the building, on the Fifth avenue side; and by a third to The Times counting room immediately ay the corner, each flanked by circular sidewalks or buttresses. Above the Washington street and Fifth avenue entrances are twin windows running to the top of the building. The basement will be faced with heavy rusticated ashlar stone. It will have two entrances from each street, reached by stone steps extending all round on either side. The windows, which will be set with heavy French plate glass, will be capped with segmental arches. A heavy stone cornice will run between the first and second stories, with stone balconies projecting over each of the entrances, the entrance at the corner as well. The exterior of the first story will be, also, partially faced with ashlar work and beveled joints, and the windows capped with segmental arches, similar to the basement. The second story windows are to be supported with heavy stone columns of dimension stone with raised panels, surmounted with caps, ornamented with dentels. These support a heavy stone cornice, wit enriched mouldings. The third story windows are flanked on each side by columns which have ornamented capitals, and carrying a cornice having an enriched freize below it. The windows of the fourth story have semi-circular heads and heavy recess mouldings all around them. The fifth story has a series of twin windows directly over the windows of the other stories, over which are eliptical molded hoods, connected with each other, and running all round the building, The cornice proper is 6½ feet high, with heavy brackets running down over the supports below, giving an additional effect of solidity, and with like smaller brackets, over each window. There is an ornamental finial over each support, those at the corners being considerably higher than the others. Upon the corner entrance, at the first story, will be the inscription, The Times.

In the place of the twin windows at the corner of the fifth story, there will be a large illuminated dial, which will bestow the time gratuitously on all.

The main entrances to the building are flanked by heavy ornamental pilasters, on which rest the brackets that carry the balconies above.

Internally, this edifice is arranged for the express accommodations of The Times, in its various departments, and when completed and occupied it will be the finest newspaper building in America. Our limited space forbids a full description.

The architect of The Times building is Mr. James H. Willett, a new comer among us, but a gentlemen who thoroughly understand the profession, and who, in this structure, will have a monument of architectural art that will do him much credit.

The New Building of The Chicago Times, in Process of Erection
Corner Washington Street and Fifth Avenue

THE TIMES BUILDING.
Keeping pace with the material improvement in the reconstruction of the city, the Chicago Times is erecting a building much superior in all respects to the former one, situated on Dearborn street. Formerly of Joliet limestone, it is rebuilt, on another site, of yellowish sandstone, changed in design and construction for the better; adapted to the increasing requirements of the concern, and an additional evidence of Chicago journalistic enterprise. It is situated on the northwest corner of Wells and Washington streets, is 81×81 feet on the ground, five stories high above the basement, and constructed of a yellow sandstone from Stone Point, Mich. Mr. Willet, the architect, describes the style as English-French. The main feature of the facade is the narrowness of the windows and the plainness with which they are treated. The corner is cut off, leaving a main entrance to the counting-room. This entrance is covered by a porch supported by stone columns. The words, “The Times,” indicate the purpose of the building, and are cut in letters similar to the head-line of the paper, which is suggestive and ornamental at once.

The basement, which will contain the presses, folding machines, etc., has been constructed fire-proof, with iron and brick arches, which will eventually protect the printing machinery from injury, even should the building be destroyed by fire.

The main floor is divided into thee compartments, the centre one containing The Times counting-room, and the others bank offices.

The second and third stories, which will be finished handsomely in hard wood, and contain all modern improvements in the way of furniture, such as steam coils, open grates, and wash-bowls, will be rented for office purposes.

The fourth story is to be given up to the editorial staff, liberal accommodations having been provided for the attaches. The library of the office will be 20×28 feet.

The fifth floor will be occupied by the composing and stereotyping rooms, with ample room.

The building will be finished handsomely, and heated with steam. The delay in its erection is due to want of punctuality on the part of the contractors, who ought to have furnished the stone. It is expected that the roof will be on nect month, if the stone comes in at a fair rate. 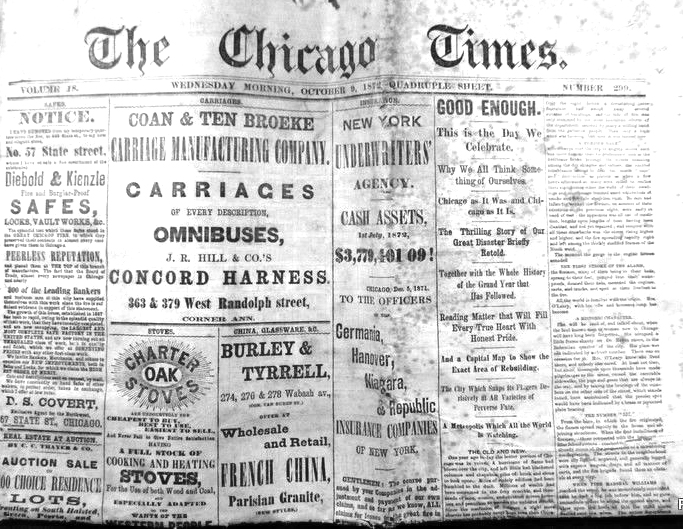 The “Times” is putting up a handsome and well-planned building for its own use, on the corner of Washington street and Fifth avenue — a much finer office than it had before the fire, and an effective contrast to the barracks in which it has been quartered since.

The Times Building is at the northwest corner of Washington Street and Fifth Avenue. Before the Great Fire Fifth Avenue was called Wells Street, and still bears that name north of the river. The structure was erected by Wilber F. Storey, under the direct supervision of Franc B. Wilkie, a writer famous as “Poliuto,”and for his many valuable books. The history of the building is given in Wilkie’s “Recollections.” While it was uprearing, in 1872, the Times occupied a long one-story shed near the river south of Adams Street on the West Side, where the Union Passenger Station’s immigrant room now stands. The Times Building is exceptional in its advantages of light, heat, and elevator service, which have been continuous, night and day, for twenty years. The edifice was a valuable and elegant one in its day, and its hardwood finish has given it an enduring character, though the wear and strain on the interior of a daily newspaper office are great. There are 5 stories, and the presses are in the basement; 80 feet on Washington Street, 189 feet on Fifth Avenue, 75 feet high, 2 steam passenger elevators, 36 offices, 4 stores, counting-room of the Times, and offices of the daily Free Press, The editorial rooms and composing room are on the upper floor, and many of their conveniences were for fifteen years the best in Chicago.

The Times1 was founded in 1854 by Isaac Cook, James Sheahan and David Cameron. Mr. Sheahan conducted it until the summer of 1860 when it was purchased by Cyrus H. McCormick, who was also the owner of the Herald. The Herald had been founded in 1858, to represent the Buchanan, or administration, democracy. Mr. McCormick consolidated the two papers under the name of the Herald and Times, intending eventually to drop the name Times.

He placed E. W. McComas in editorial charge, a journalist from Virginia, and the paper then became an exponent of Southern democracy. The paper was then published in the fifth story of the McCormick Block, on the corner of Randolph and Dearborn streets. The circulation was but little over one thousand, with no advertising patronage worth mentioning. In a very short time these quarters were found to be too small, and a removal was made to No. 74 Randolph Street, and the paper began to assume the enterprise and audacity which were henceforth to be its chief characteristics.

The close of the war found the Times one of the most prosperous newspapers in the city, and it was compelled to enlarge its quarters and press facilities. In 1866, a new building with a stone front was erected on the southwest corner of Dearborn Street and Calhoun Place. It was five stories in height, and intended expressly for the Times.

It was the main life-work of one man, and in no particular can it be disjoined from him. However the Great Fire of 1871 burned the building and paralyzed the publication.