CITY HOTEL TO BE REBUILT.
It is in discussion, and will doubtless be carried through, to rebuild the old City Hotel, on the corner of State and Lake streets, into a merchants’ hotel, retaining and perpetuating the old-time associations of the “Stiles Burton Corner,” which Mr. Burton holds by direct patent from the Federal Government. The proposition is to build the house five stories high, with the hotel entire on the second floor and stores beneath. It is in contemplation to connect with the house the three upper stories of the next building east, D. B. Fisk’s old stand, which will give the City Hotel the capacity of nearly one hundred and fifty rooms, making it more elegible (sic) than ever before for business men visiting the city. The present project, if carried out, will be one of the earliest completed improvements in that quarter of the city. 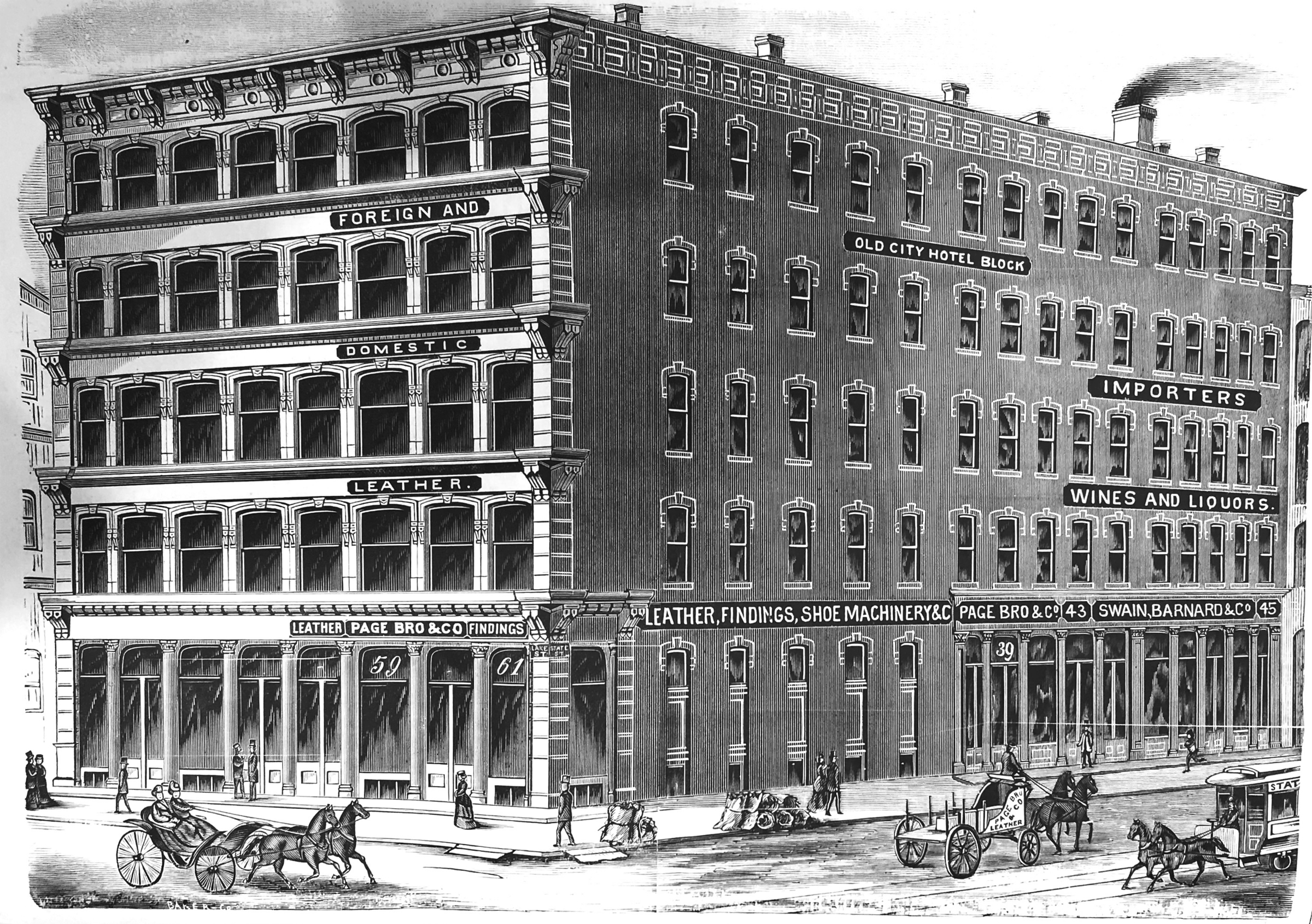 Building erected by Stiles Burton on the site of the old City Hotel, and occupied by Page Bros. & Co., corner Lake and State Sts.

THE OLD CITY HOTEL BLOCK.
The “old city hotel,” located at the southeast corner of Lake and State streets was, before the fire, one of Chicago’s landmarks, as its erection dates back to the early days of the growing city. Around the old structure cluster many fond memories, still cherished by our early citizens, so many of whom lately have passed off the stage to give place to the rebuilders of the city they saw grow up so rapidly and destroyed to suddenly. But the “old city hotel” is no more. On its site the Burtons have erected a magnificent mercantile structure, which our artist has carefully shown in the engraving shown herewith. This building was, immediately upon its completion, or in fact before it was completed, so imperative are the demands of trade, taken possession of by the extensive and well-known leather firm of Page Bros. & Co., who we know are located there, and carrying on their large business within its walls, with everything as comfortable and pleasant about them as if they or the leather houses of Boston, with whom they compete successfully for the trade of the West, never had been burned out. 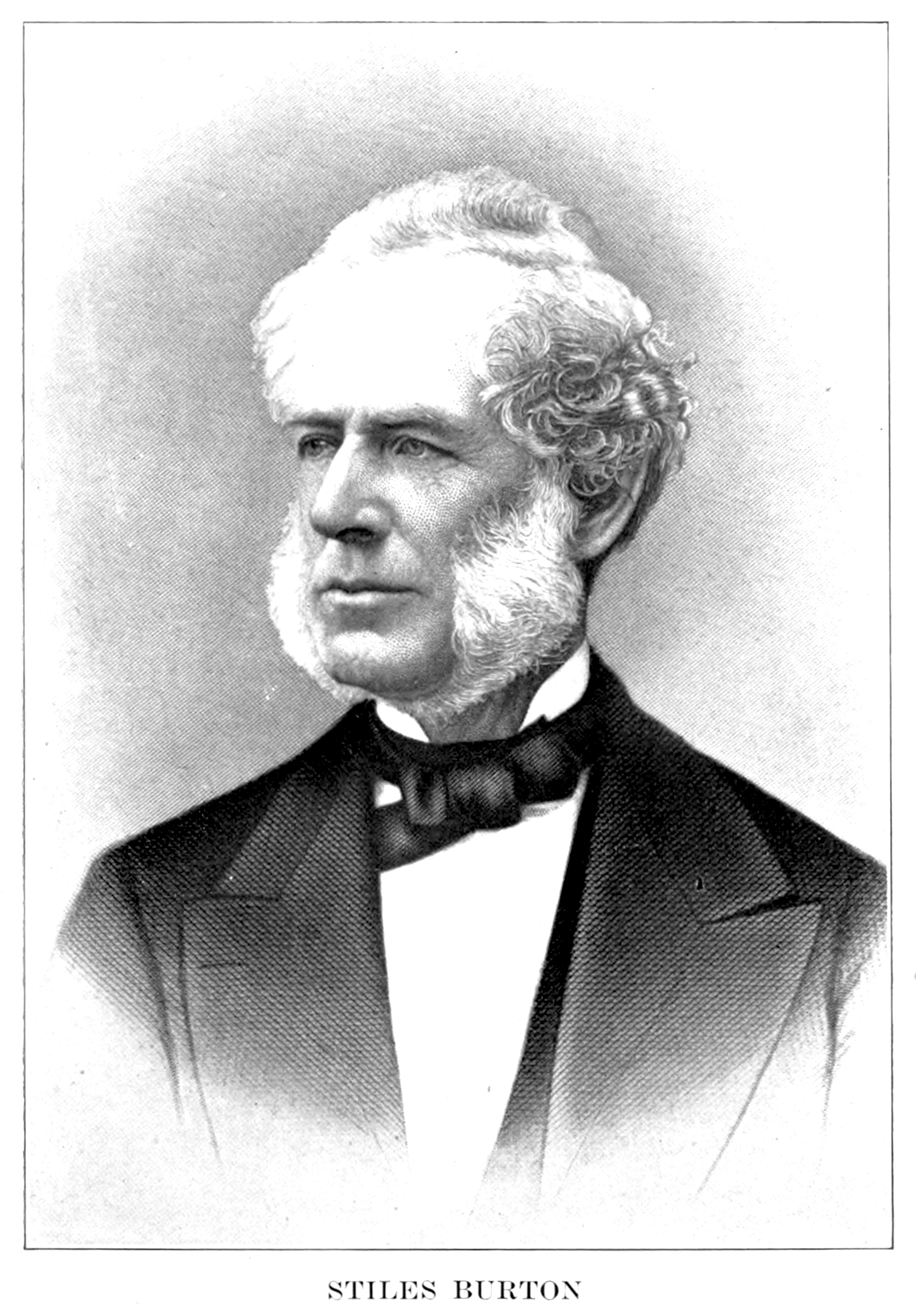 Before the fire, this house was located at 50 Lake street, where their large stock was consumed. But they immediately established themselves at 35 and 37 South Canal street, soon had the most complete stock in store, and went on with their business again its old channel. At the latter location they remained until the new building was ready for their occupancy.

In the this connection, and while congratulating Page Bros. & Co. upon their elegant new quarters, it may not be amiss to speak somewhat of their antecedents. The senior member of the firm, Wm. W. Page, Esq., is a member of the great leather house of Cragin Page & Co., of Boston, where he resides, and where he has been engaged in the leather business for 25 years. The other members of the firm, who manage the house here, are Orville Page and Clinton E. Page, both gentlemen well known in both commercial and social circles in Chicago. Both have been engaged in the leather trade all their lives, and are perfectly familiar with the business in all its various details. They are gentlemen of integrity, close business habits, and have but one object in view, and that the success of their house, it being their ambition to lead the leather trade of the West, which they undoubtedly do.

The large new building which we illustrate is crowded with an immense stock of leather, findings, all kinds of boot and shoe manufacturers’ goods, etc., fresh and complete. Here they have ample room for their trade. The building is provided with steam elevators, heated by steam, and in arranging their stock they have had especial care to so place their goods that the buyer has little difficulty in personally seeing whatever he wants.

The “old city hotel” corner is one of the very best in the city. Here is the junction of all the west and south side lines of street cars, the depots and hotels are convenient, and the site is in every way a peculiarly desirable one.

The Land Owner notes with much satisfactory the re-establishment of such houses as this in better quarters than before the fire. It is an evidence of our wonderful growth and vitality as a city, and the staunch character of our leading merchants, always the life of the metropolis. 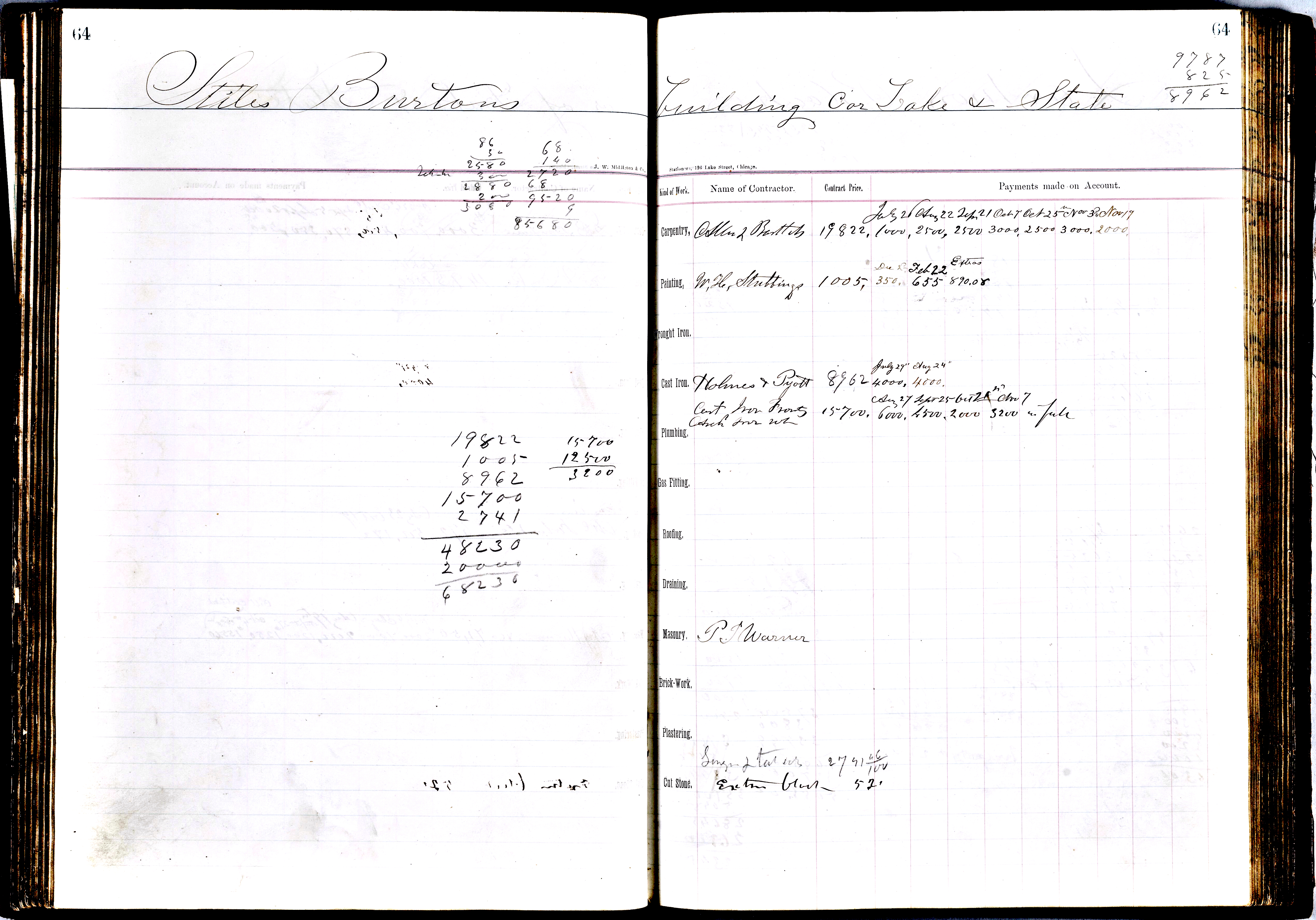 The Western Bank Note Company have removed to the southeast corner of Clark and Lake streets. 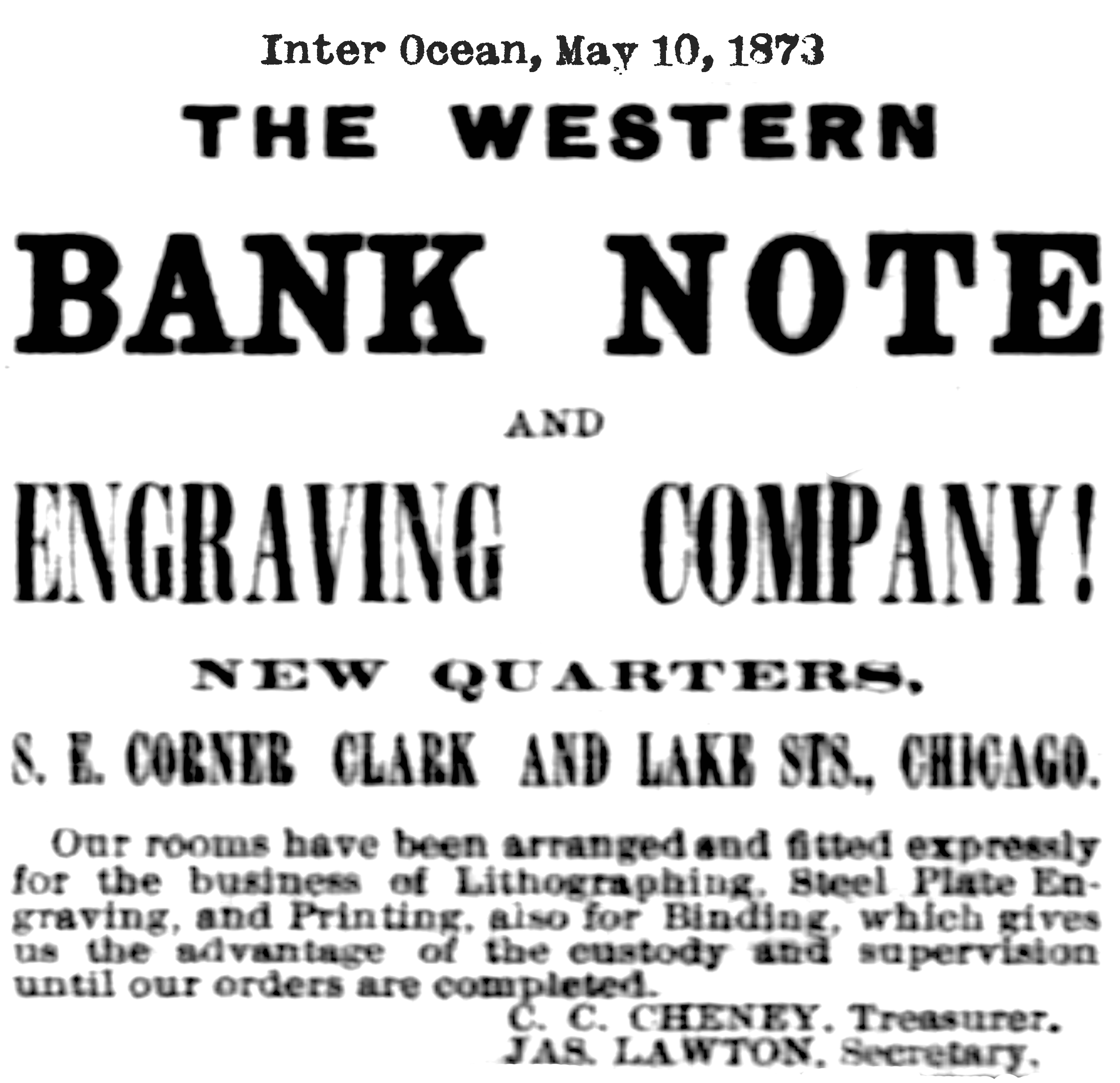 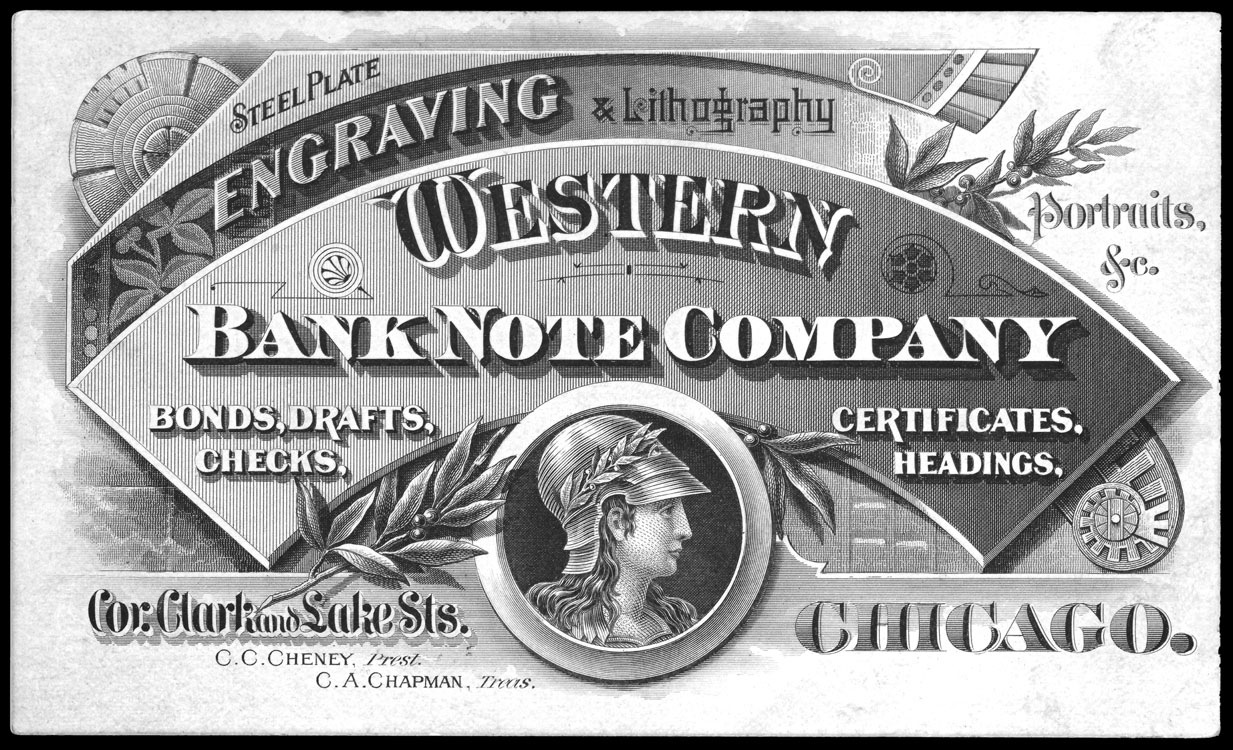 To Divide Stiles Burton Estate.
Commissioners Are Appointed by Cook County Circuit Court.
The Circuit Court of Cook County issued a decree last week appointing William D. Kerfoot, John B. Knight, and Edgar M. Snow as commissioners to partition the property of the estate of Stiles Burton, who came to Chicago in early days and died here in 1877, and to make a division of the real estate among the heirs. These are Le Grand W. Burton, Mrs. Virginia B. Holmes, widow of the late Ira Holmes; Mrs. Sophia Burton Gagnon, wife of George S. Gagnon; and Robert C. Burton, a minor, Mrs. Gagnon and Robert C. Burton being children of S. Lester Burton, a deceased son of Stiles Burton.

The property involved in this proceeding embraces the Burton homestead, 229 Michigan avenue,
together with the premises 76 and 78 Wabash avenue, 67 and 69 Lake street, the old City Hotel property at the southeast corner of Lake and State streets, and 80×150 feet at the southeast corner of South Water and Dearborn streets, with the buildings, excepting 20×80 feet on the corner.

The property involved was appraised by Mayor Swift’s Tax commission at $1,373,030.

Plans have been made for the reconstruction of the old City Hotel property at the southeast corner of State and Lake streets into a fine office building. The improvements will cost between $35,000 and $40,000.

The Northern Trust company is agent for the property, which is owned by the heirs of S. Lester Burton. The land has a State street frontage of 109.6 feet, and is 70 feet in Lake street.

The plans for the reconstruction include the change of the present entrance to the building from Lake street to State street. The first floor will be converted into stores, each 20×68 feet.

The corner store will be 20×34 feet, and surrounding it will be another store with a frontage of 20 feet in State street and 33 feet in Lake street.

The second story will be divided into seven rooms suitable for mercantile purposes or for showrooms for large wholesalers.

The other three floors will be divided into offices. Important changes in the exterior of the building will be made, the present front being replaced for the first two stories with a new one of ornamental iron and plate glass. The windows will be enlarged, and the top of the front will be ornamented with a heavy cornice.

The entrance to the building will be ten feet wide, and will be finished in marble and mosaic. Two elevators will be installed, and the equipment will made modern in every way. Work on the alterations will begin as soon as the working plans are completed.

E. F. Keebler & Co. have leased for James F. Porter to S. Raymond space on the fifth floor of the Loop End building, southeast corner of State and Lake streets, for ten years from Mov. 1 at a rate of $24,000 for the term. 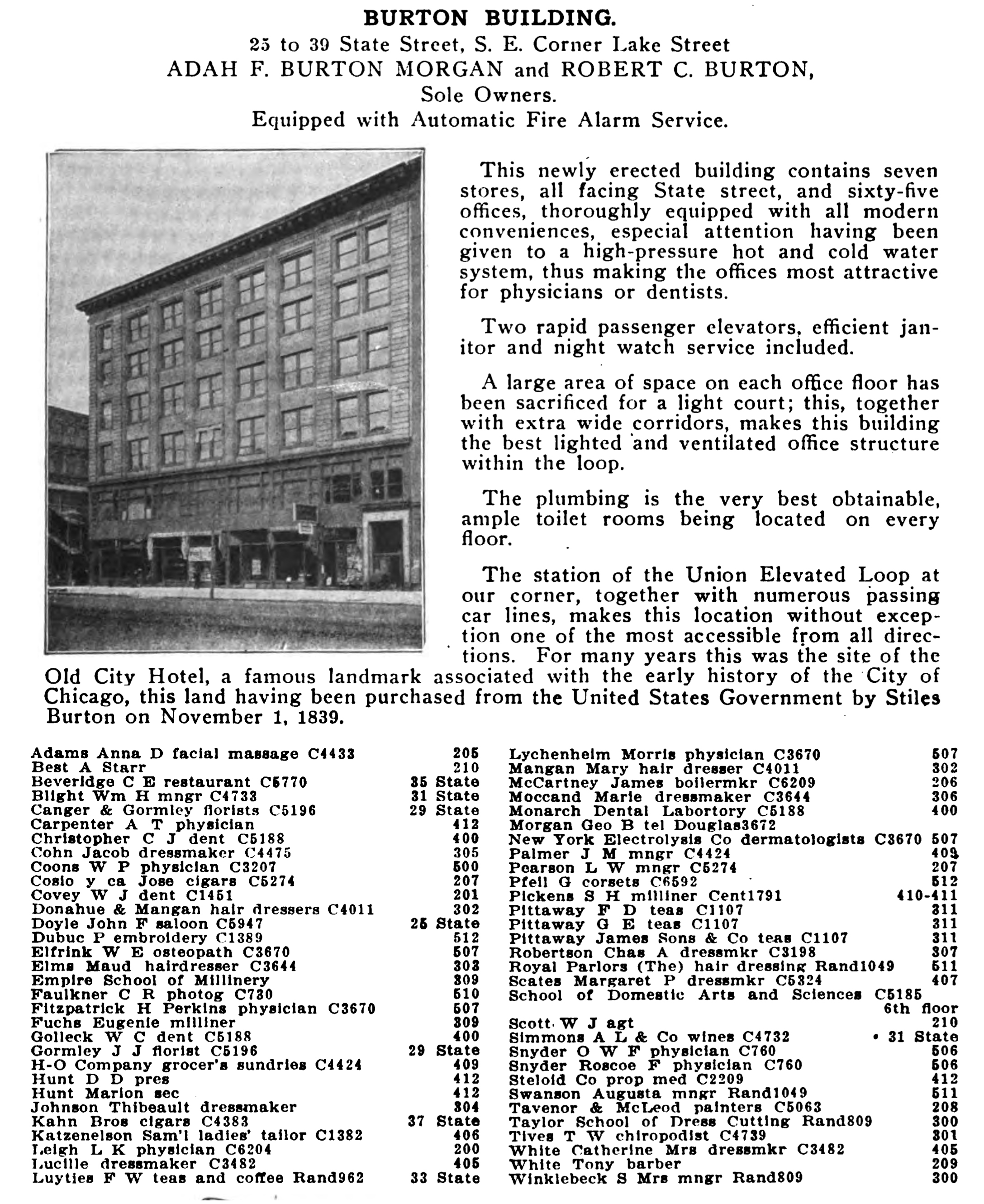 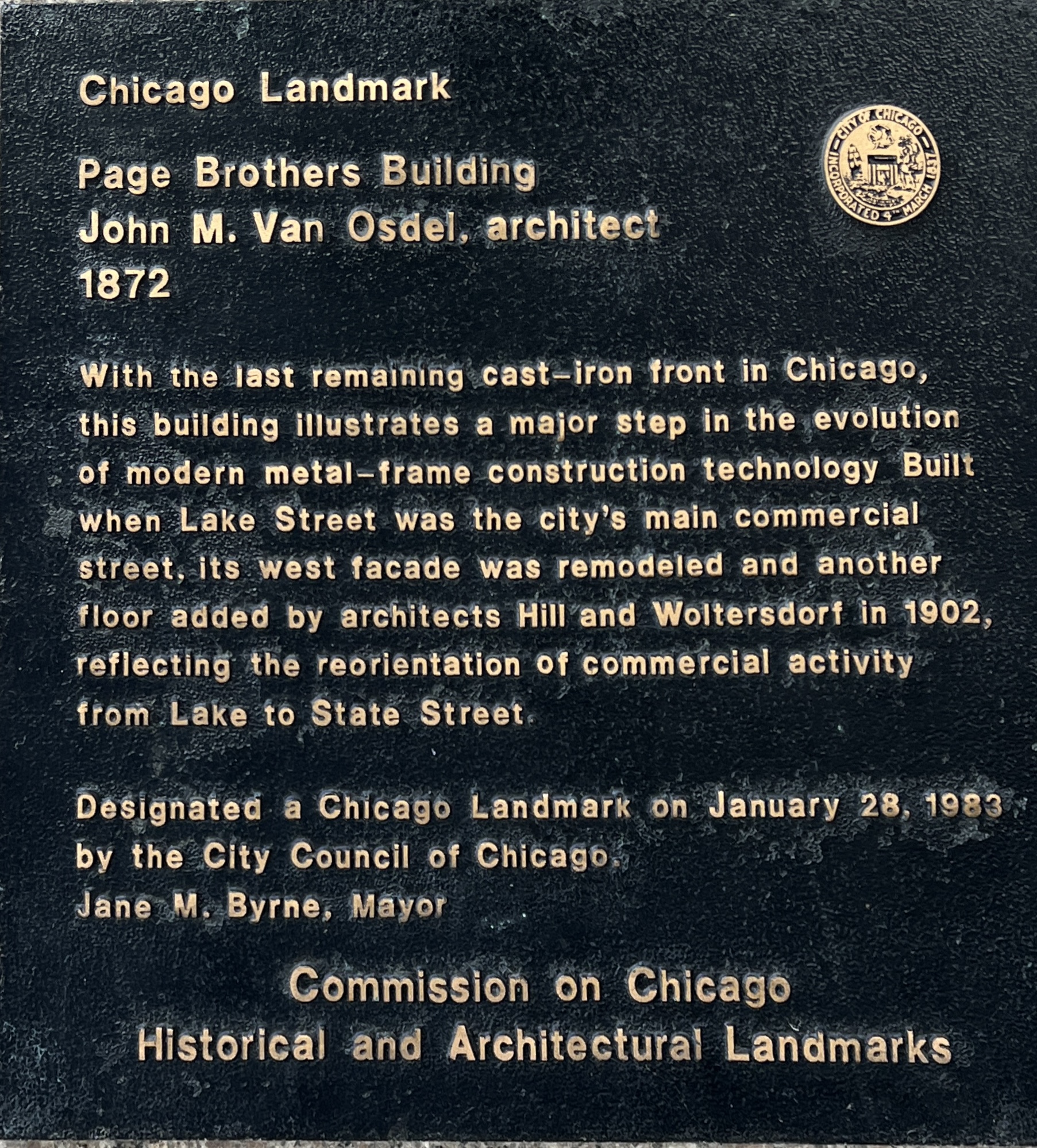 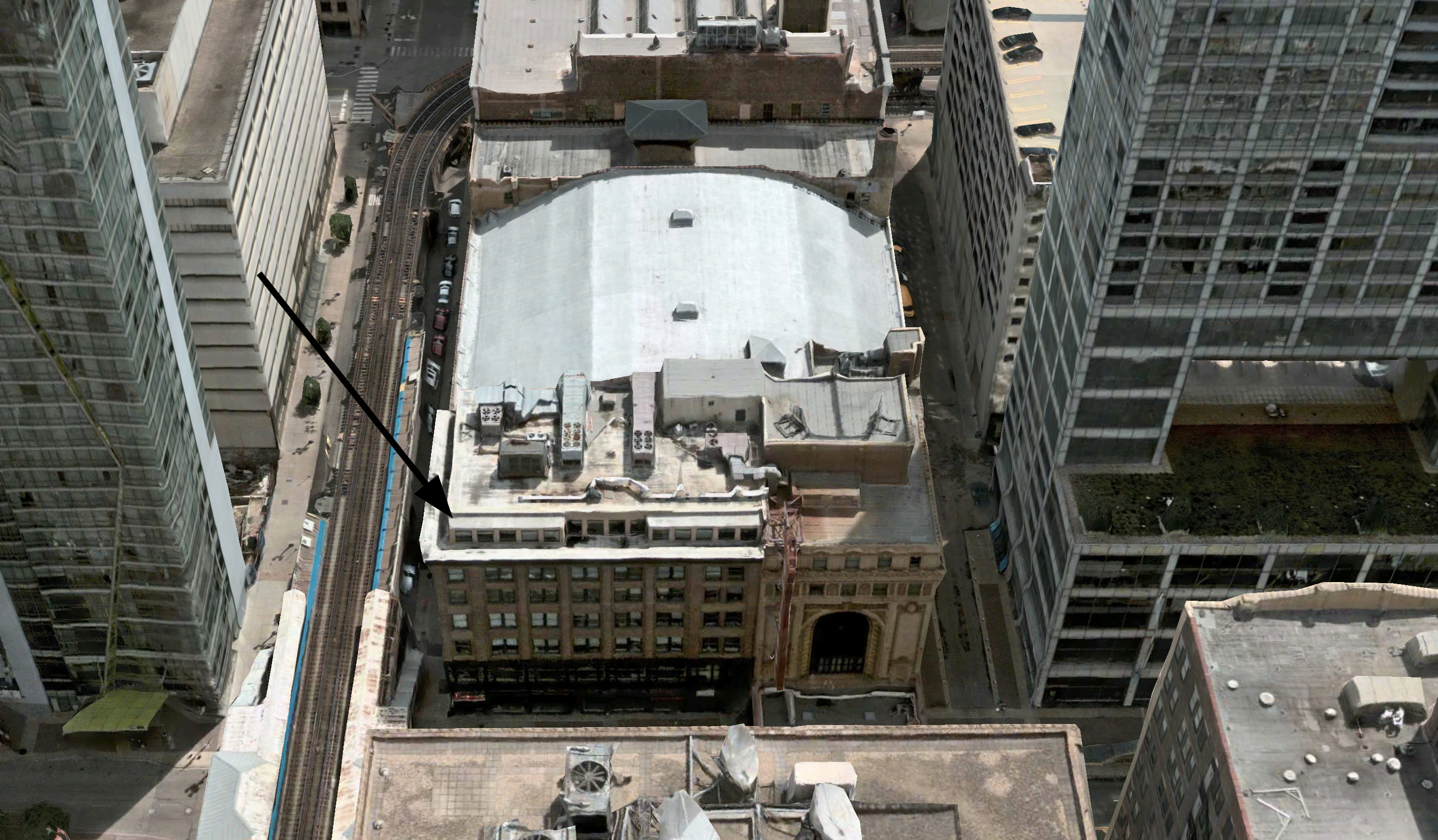 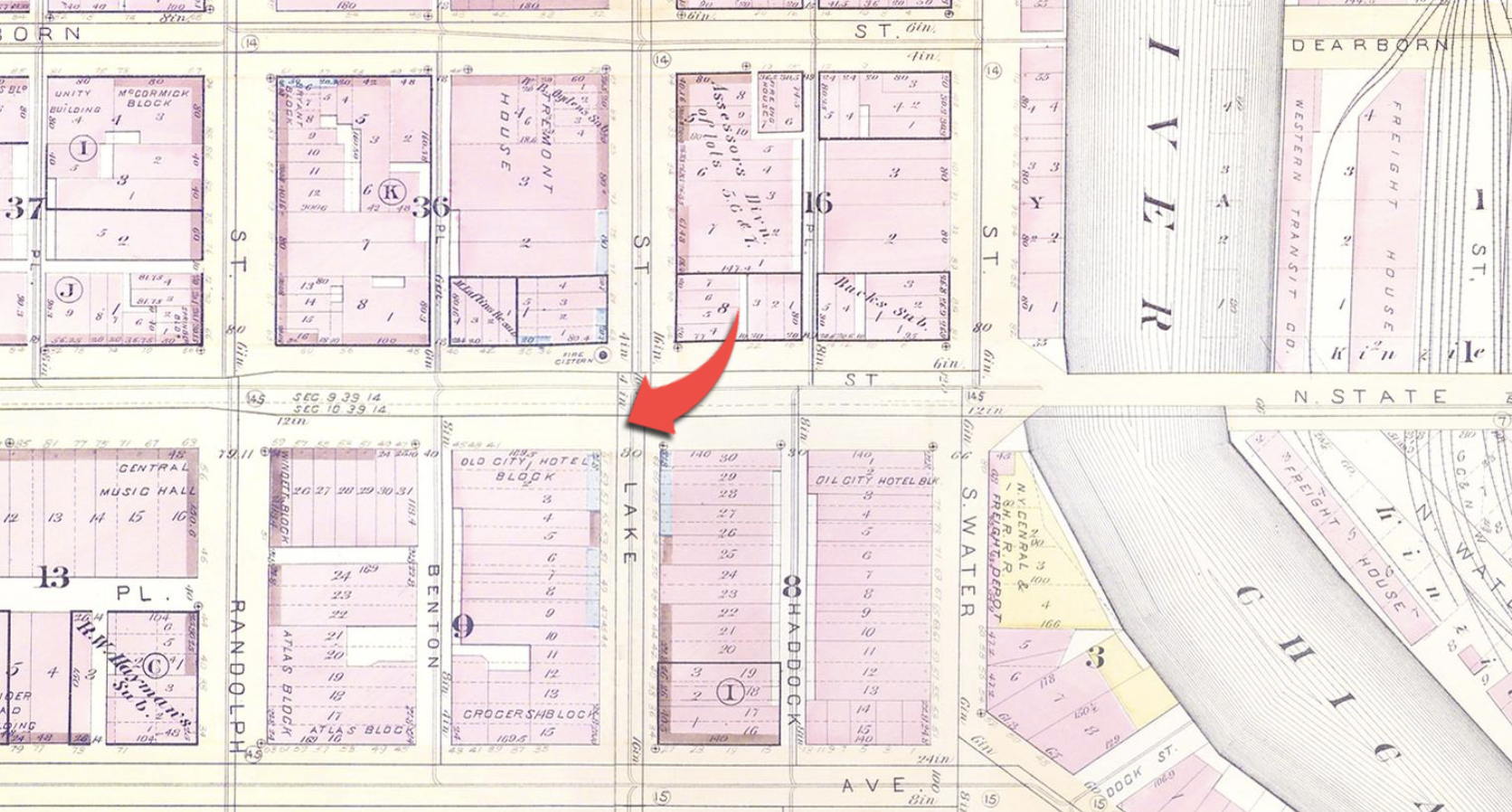 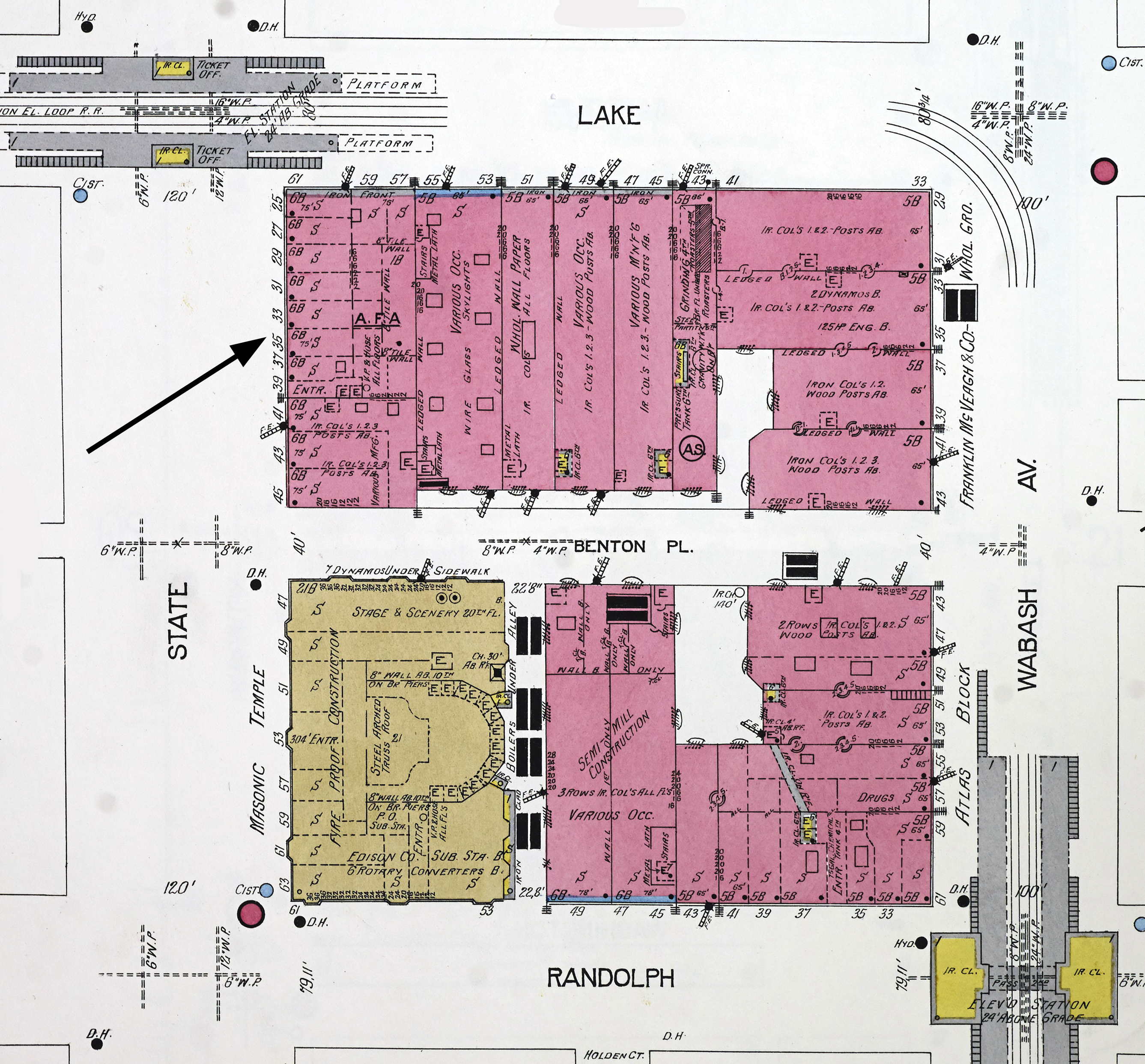