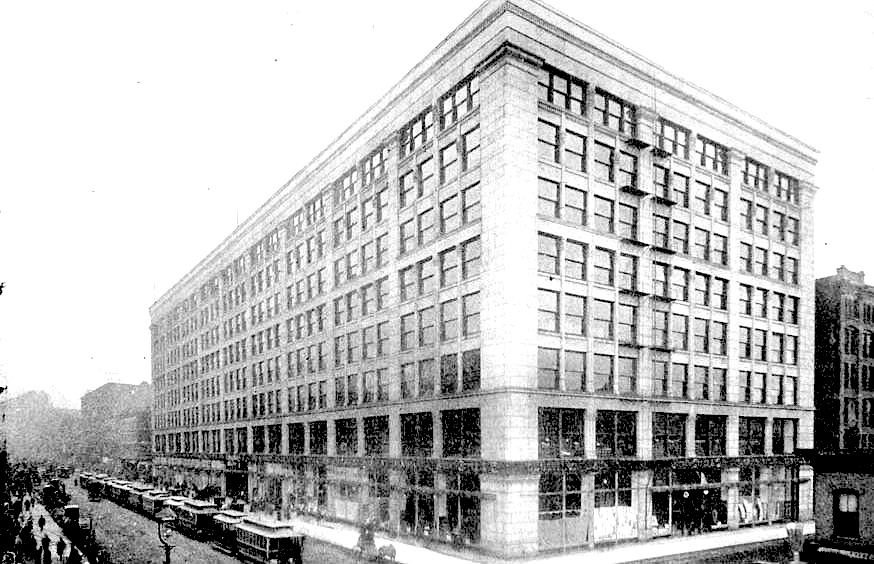 In all human probability Siegel, Cooper & Co. will occupy the great structure on State street, between Van Buren and Congress streets, now being completed by L. Z. Leiter. For six weeks past negotiations have been in progress between the parties for the leasing if the building, but so quietly did they work that until yesterday not a word had leaked out.

Orders have been given to the contractors at work on the building to complete the structure as one large store, and push the work to completion as rapidly as possible. Siegel, Cooper & Co. must have possession by March 1 next, as the lease under which they occupy the new store of Alexander H. Revell & Co., at the northeast corner of Wabash and Adams street expires then. 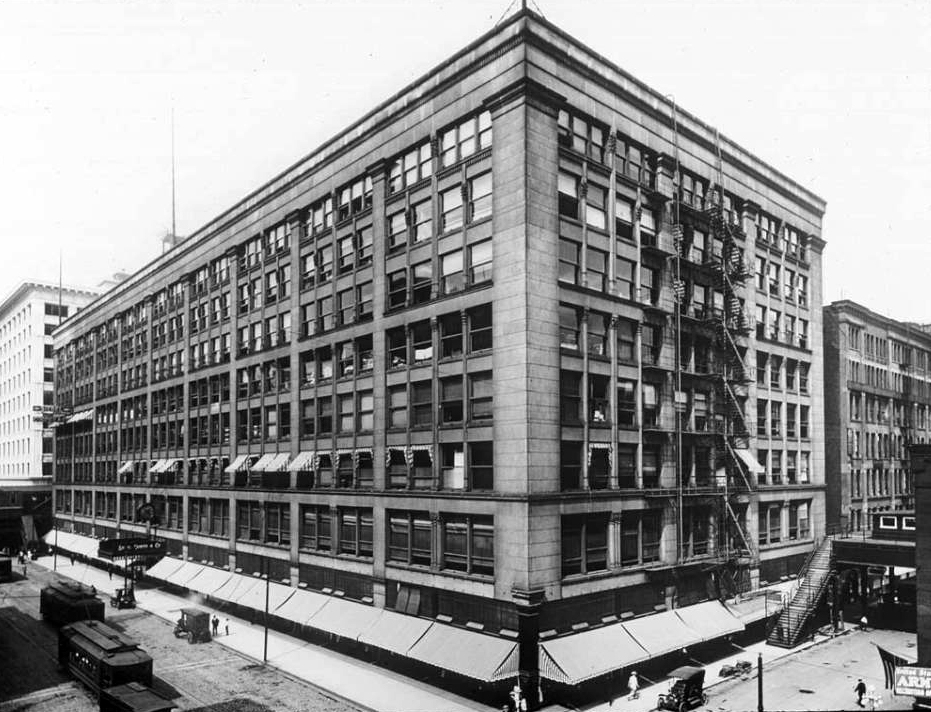 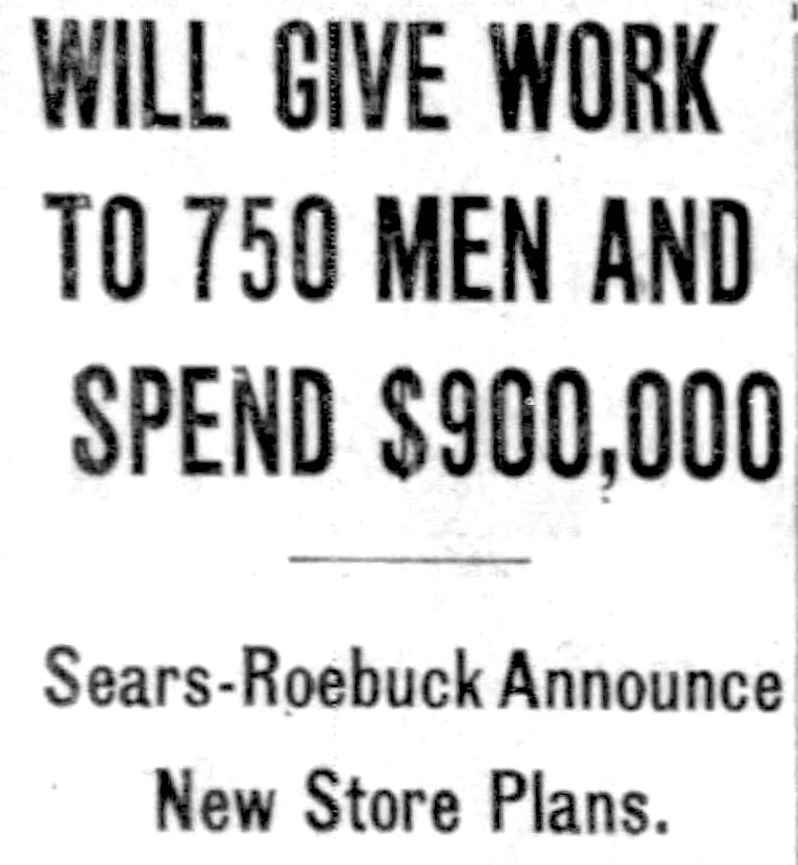 BY AL CHASE.
Approximately the $900,000 is to be spent, it is understood, and work supplied for 750 men in the remodeling and modernizing of the old time eight story Siegel, Cooper and later Leiter stores, at State and Van Buren, into a great downtown merchandise emporium for Sears, Roebuck & Co., it was announced last night by L. B. De Witt, manager of construction for the big mail order concern. This is the first official statement regarding the rebuilding plans made public since the property was leased for 20 years from the Leiter estate last month. The new store is expected to be open early next spring.

As announced by Robert E. Wood, president of Sears, Roebuck & Co., at the time the lease was signed, the old building is to be made into one of the most modern of department stores. Mr. DeWitt said:

The building will be so completely altered that no one familiar with the stores housed there will recognize it when it opens as a Sears-Roebuck unit. The store will also be, in a sense, something new for the Sears-Roebuck organization. It will be different in many respects from any store in the company’s retail system. 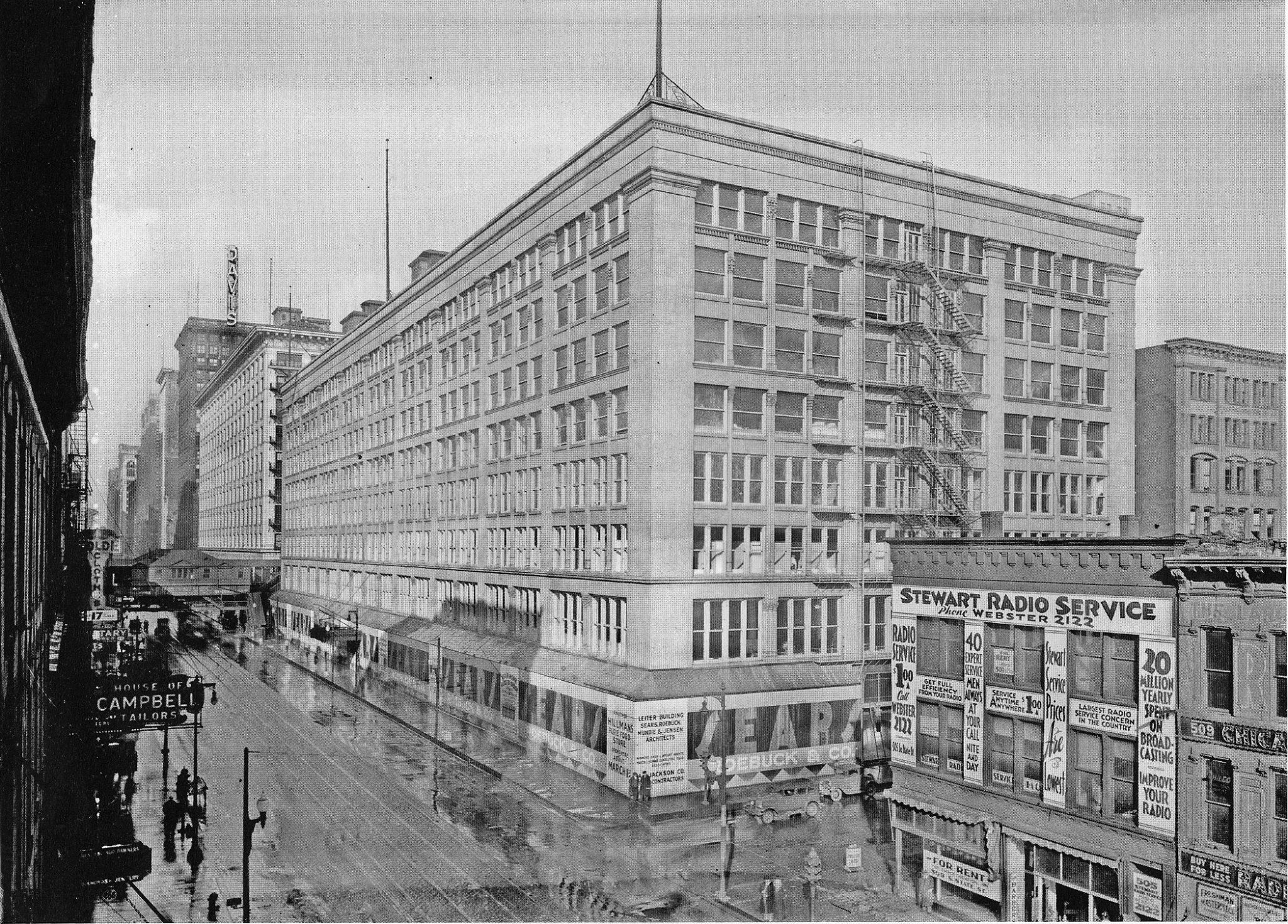 New floors are being built and terrazzo will be used in the basement and on the first floor. New elevators and elevator enclosures will be installed, white metal to be the prevailing material. The ceiling of the first floor will be lowered and redesigned.

New Ventilation System.
An entire ne ventilation system will be installed and the building will be completely rewired for the accommodation of the more modern lighting fixtures.

The arrangement and equipment of the interior of the store is being done under the supervision of the national display division of Sears, Roebuck and some of the plans have resulted from a series of experiments extending over a period of about two years.

Most revolutionary in the fixture arrangement of the store will be the elimination of unnecessary islands and ledges so that an unobstructed view of the entire floor may be had from any point on the floor. Ledges will be used only to define departments. Each department will have its own color scheme which will be carried through even to the carpets.

On the large mezzanine balcony will be established spacious restrooms which also will be decorated in the modern manner. Among special service departments that will be located on the mezzanine balcony and also in other parts of the store are beauty parlors, barber shops, a shoe repair shop, a flower shop, a pet store, and a number of specialty shops. A women’s ready to wear salon will cover almost the entire second floor. There will also be a linen shop.

Award General Contract.
The third floor will include a lrge number of home and electrical equipment departments, including radios, kitchen equipment of all kinds, curtain and window shade shop, and here factory demonstrations of various mechanical merchandise will be conducted every day. Special instructors will be busy with classed every day on the second floor in a home craft shop, where women may take courses in almost every branch of the domestic arts and crafts.

One of the most interesting innovations of the new store will be the third floor, where furniture and home furnishings will be displayed in several series of model rooms.

Mundie & Jensen architects for most of the plans for the remodeling. Nimmons, Carr & Wright, architects represented Sears, Roebuck & Co. Work has already started. 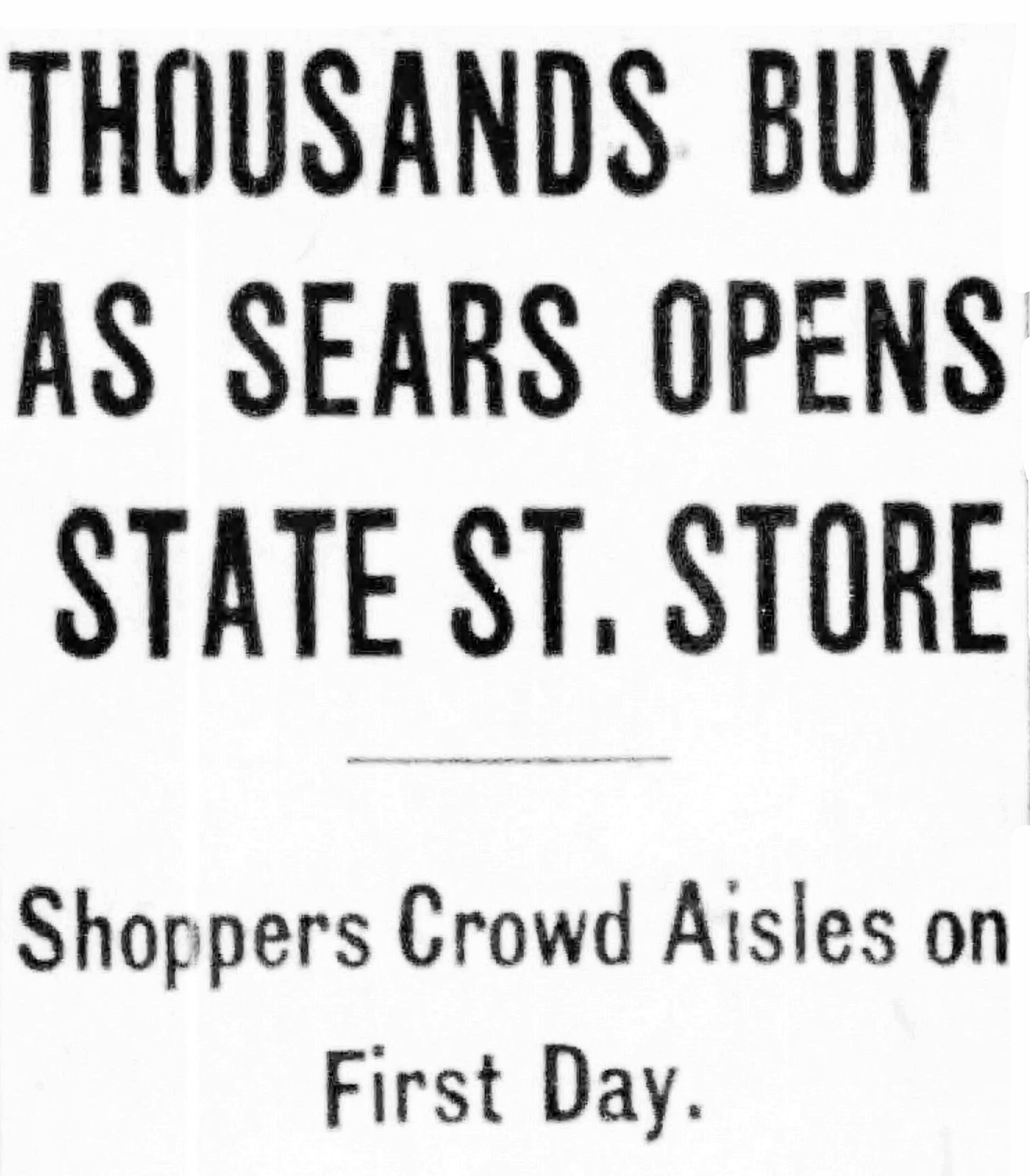 One more mercantile establishment entered the great State street field yesterday when the new Sears store was opened to the shoppers swarming about its doors. From 10 o’clock in the morning when City Controller Szymczak snipped a ribbon across the main entrance until 9 last night the emporium was the center of thousands who came to see and remained to shop.

Happily pushing and shoving, the crowd gazed admirably at the floral pieces, speculated audibly upon the number of employés who had gained salaried jobs, sniffed approvingly of the odorously new stocks, and bought with a will. Manning the counters and policing the aisles were 1,350 sales people and department heads.

Ceremony Is Brief.
There was a brief dedicatory ceremony at the main entrance on State street before the doors were opened, but there was no attendant fanfare in the way of souvenirs, special sales, or orchestra music. Eighteen pages of advertising had announced opening, without a single mention of price, in line with the policy of the executives to show the public the store as it will be day by day.

Both Gov. Emmerson and Mayor Cermak sent messages of congratulation. The former was represented by Speaker David Shanahan of the state house of representatives, and the latter by Mr. Szymczak. Lessing Rosenwald, who announced his father, the late Julius Rosenwald, as chairman of the board of Sears, Roebuck & Co., replied to their expressions of good will, on behalf of the firm, and handed Mr. Szymczak the scissors with which he cut the ribbon. 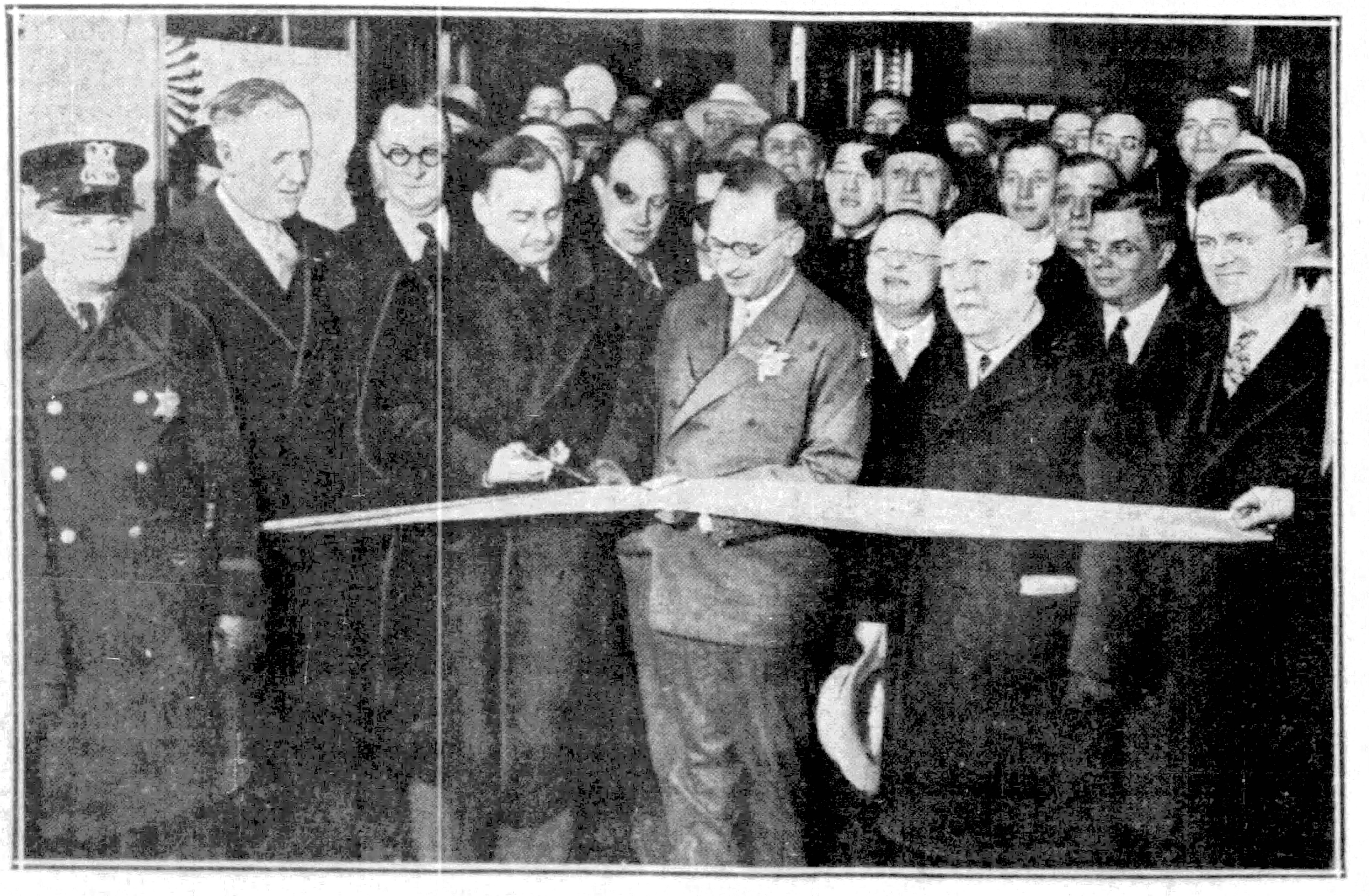 Twenty Police Handle Crowds.
Immediately the spectators waiting in the streets charged the doors. There was a stampede in which the twenty police detailed especially to handle the crowd bobbed about helplessly. The store continued jammed solidly until past midafternoon, when it thinned somewhat.

Last night store officials announced that a few more than 151,300 persons had passed through the doors during the day.

Although a preview had been given the day before to prominent business men of the State street area, most of the well-known merchants drifted back again yesterday to see the opening and tender best wishes in person. 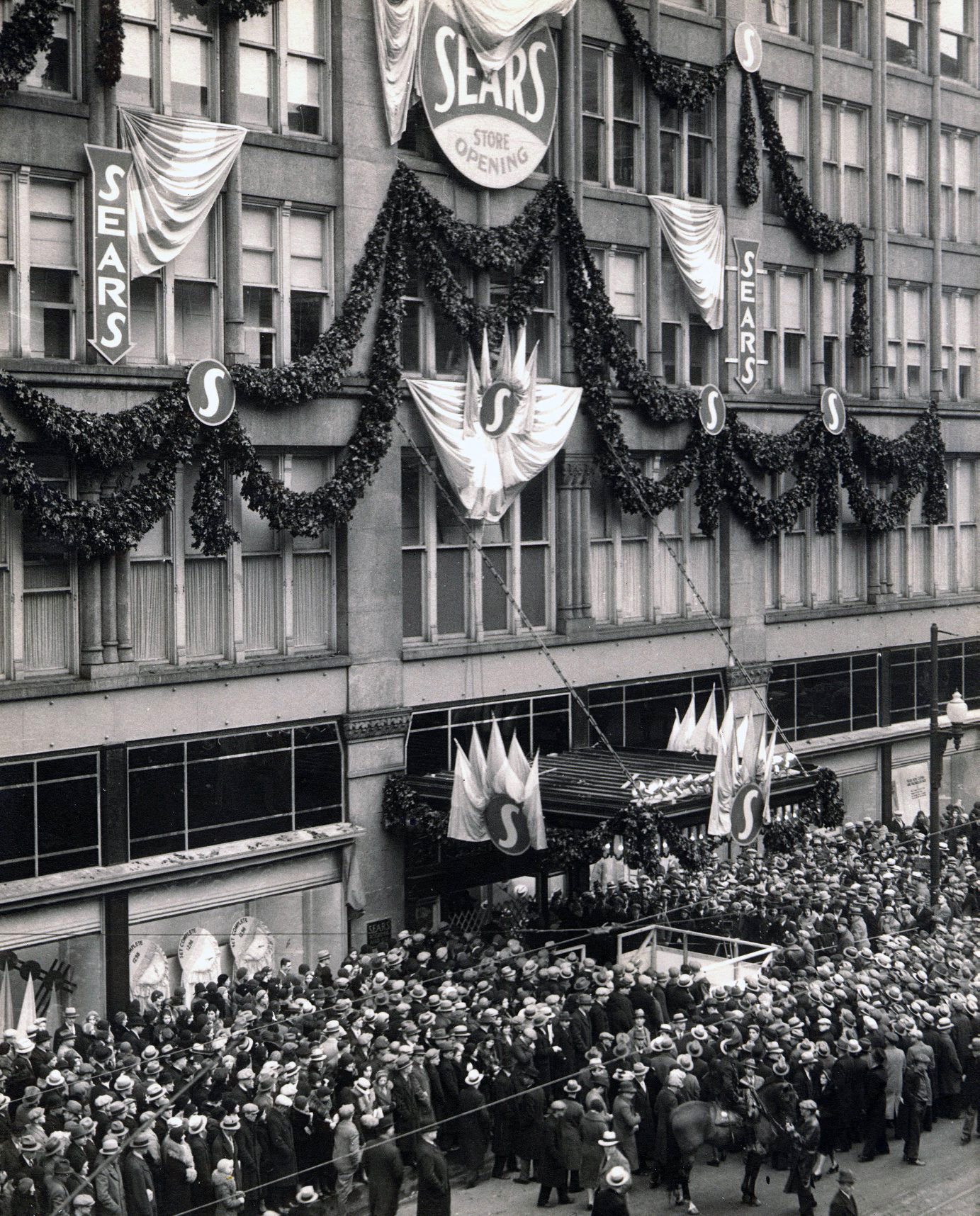 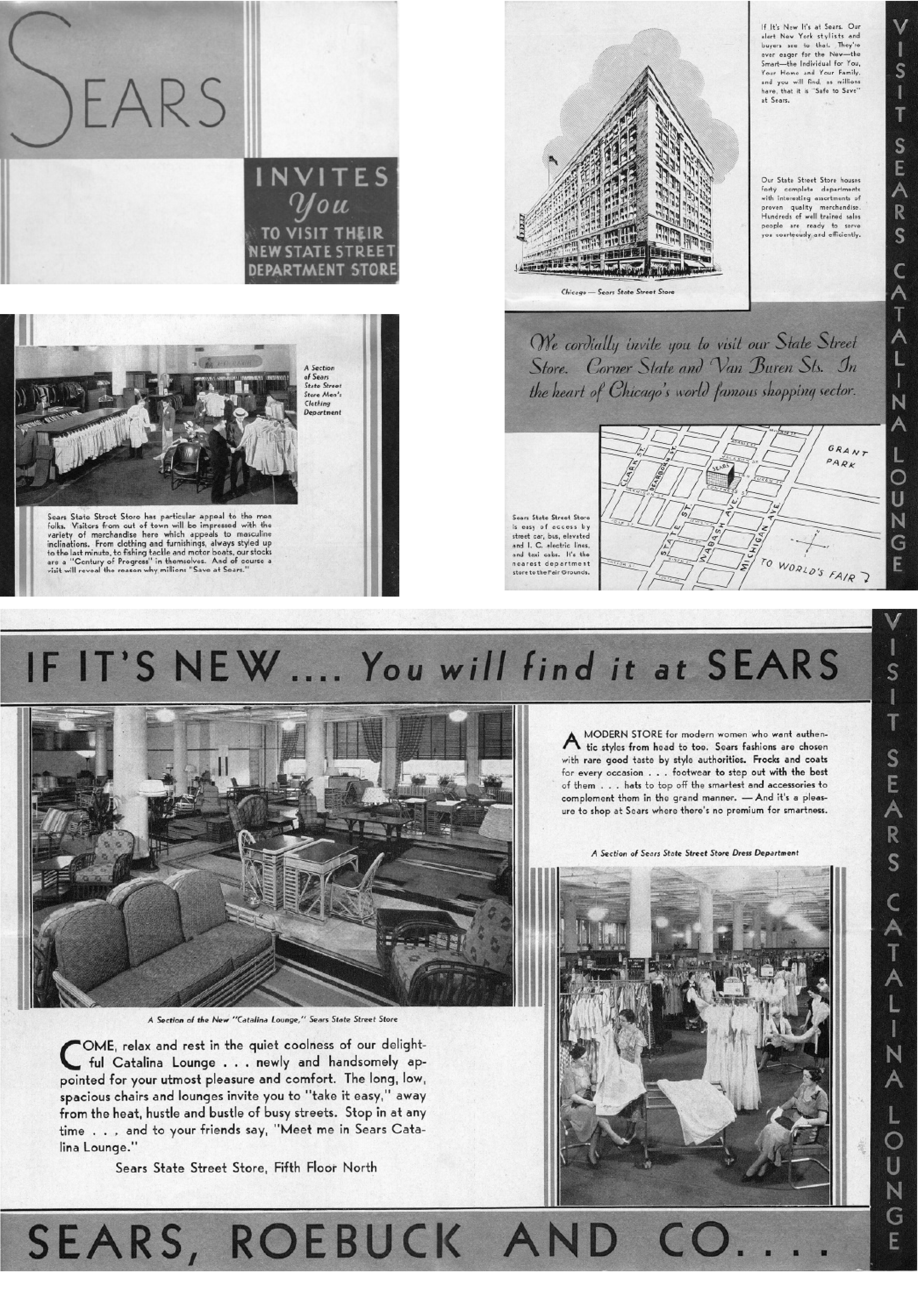 1933 brochure promoting the new Sears State Street Store during the Century of Progress. 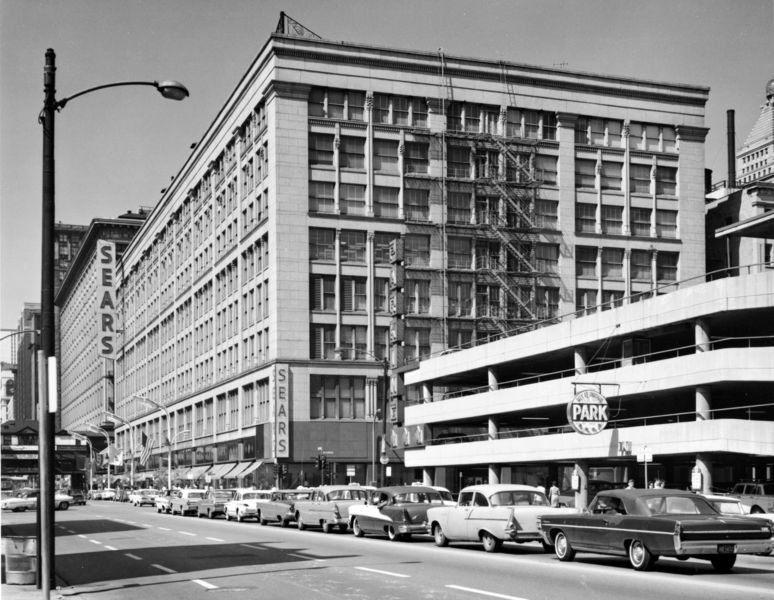 Leiter Building in 1963 as the Sears State Street store

Sears, Roebuck and Co. will close its flagship department store on State Street next spring (April 3, 1983), and the structure will be remodeled into an office building under a different owner, officials announced Friday.

Sears, which for several months had been rumored to be preparing to abandon the big retail store in the south end of the Loop, joins Goldblatt Bros., Inc. and Montgomery Ward and Co. among major retailers closing stores on State Street.

There will be no Sears store downtown after the closing. Sears has six other stores in the city.

Ira Bach, Mayor Jane Byrne’s director of development, made the announcement at a City Hall news conference. He was joined by officials of Sears.

Everett L. Buckhardt, manager of Sears’ Chicago retail merchandise group, said the store will remain open until spring, when ownership will transfer to the Anvan Realty and Management Co. of Lombard.

The huge store, with 46 merchandising departments, has been losing money for seven years, according to another Sears spokesman, but the company would not say how much money. A retailer outside Sears estimated the store’s annual sales at $30 million to $40 million.

The Sears building, constructed in 1891, is on the national register as a national historic landmark.

Buckhardt said the decision to close the store, long an anchor in the South Loop, was strictly financial.

“We were an island unto ourselves,” said Buckhardt. He said the closing of Goldblatt’s earlier this year placed Sears two blocks away from the other retailing giants on State Street.

“That part of the South Loop has not been viable for our business,” he said.

In addition to the closing of Goldblatt’s due to financial problems, Wards announced earlier this year it will demolish its existing building on State and Adams Streets and construct a new high-rise office tower. That building will retain some retail operations in the lower floors.

Bach said that the closing of three major retailing stores on State Street does not mean the Loop area is dying. Rather, he said, it reflects the changing business face of the Loop, with retailing being replaced by business offices.

Jack Cornelius, executive director of the Chicago Central Area Committee, a business advisory group, said he is certain that Marshall Field and Co. and Carson Pirie Scott and Co. will continue as Loop anchors on the north end of State Street.