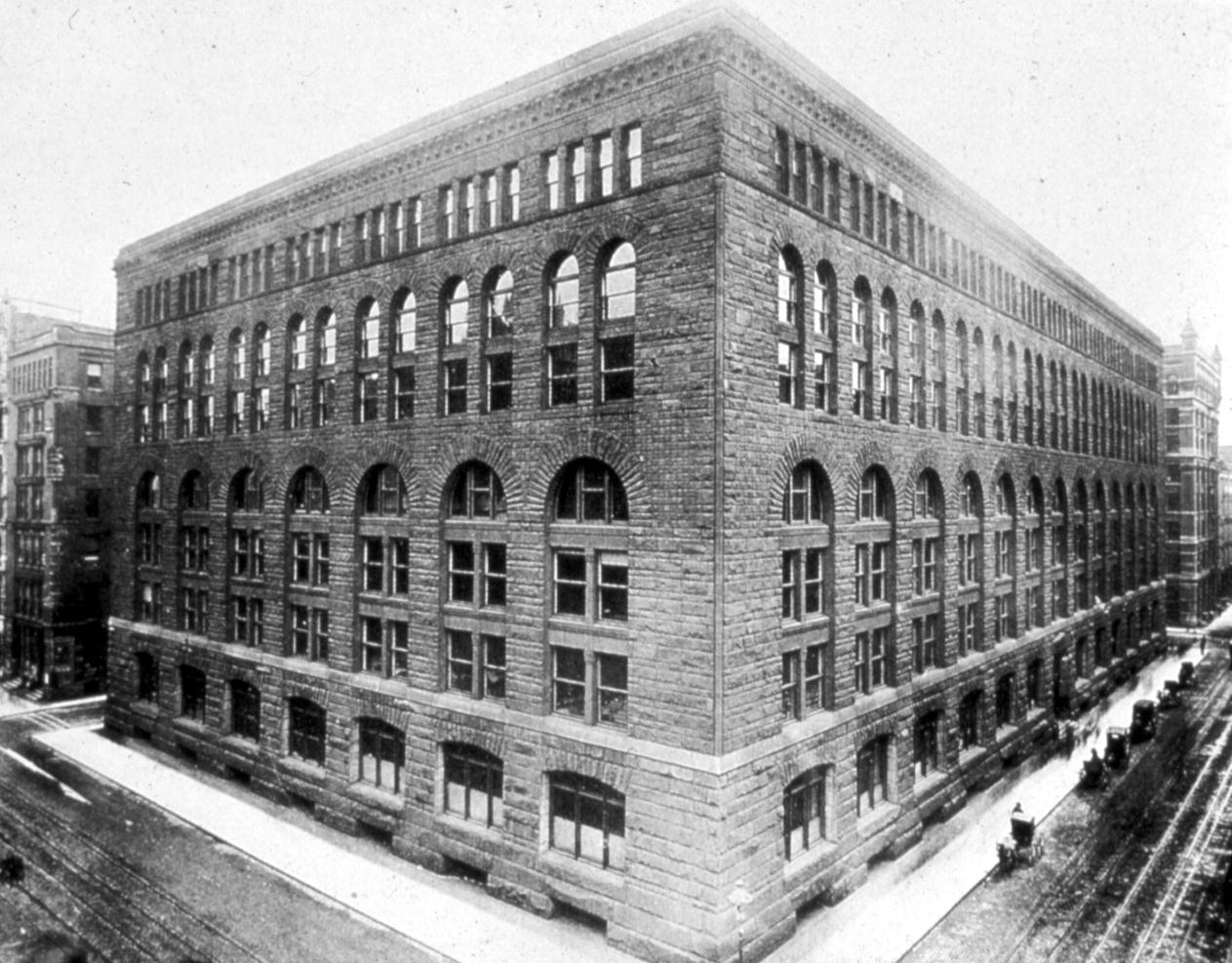 It was learned yesterday from a contractor who is in a position to know that in about two weeks from date work will begin on one of the largest and finest buildings of the kind that have ever been planned in this city or in any other in the country. It is the intention of Marshall Field to put up a ten-story fire-proof warehouse which shall cover the whole of the block owned by him bounded by Adams, Quincy, Fifth avenue, and Franklin. This is a small block as compared with most of those of the South Side, but it is so large that the building which shall cover the whole of it will be an enormous one. None other, indeed, would do for a wholesale trade of such dimensions as that of Field’s. It is understood that the reason why the present one is to be abandoned is not only because there is not room enough there, but also because the ground does not belong to Mr. Field. It is made up of many lots which were leased by Field & Leiter when they built there after the fire, and the lease will expire in about three and a half years. Part of the ground—the larger part—is owned by L. C. P. Freer, some belongs to the estate of Dr. Foster, and part of it to the Peacock estate. It may not be easy to get a new lease on satisfactory terms, and then, too, there is not ground enough. Besides which; the corner of Madison and Market might pay better were it used for something beside a wholesale store. The plans for the immense warehouse have, it is understood, been prepared by S. S. Beaman, and it is the certainty that the work of excavating will begin so soon which has put the contractors on the alert. 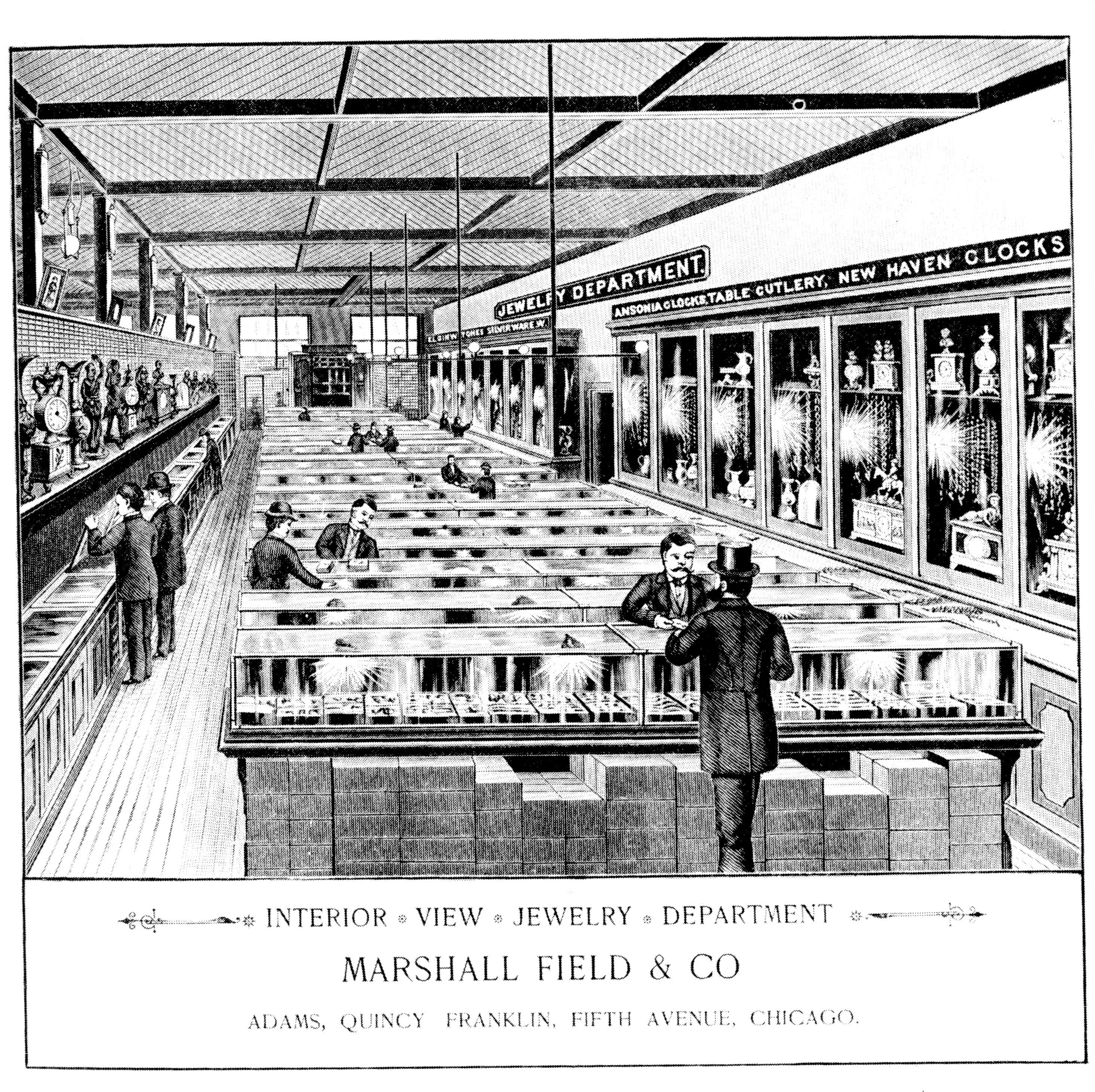 Marshall Field’s New Warehouse-His Purchases of Boulevard Property.
It is understood that some of the material for the building to be erected by Marshall Field on Fifth avenue, Adams, Franklin, and Quincy streets has already been contracted for, tough it is not known whether the work will actually begin on it this fall. Mr. Richardson, the famous Boston architect, will draw the plans. The exterior will have more elegance of design than is usually seen in business structures. Of the seven stories the walls of the two lower ones will be or stone and will necessarily be massive to support the immense weight of the upper stories and goods stored within. The upper stories will be of brick. There will be a large quantity of plate-glass in the construction. It is intended that the shipping facilities shall be on the Quincy street front, which will be deeply recessed for that purpose. Freight elevators will be built close to that front, and there will be two passenger elevators in the building. Thefollowing sketch will give an idea of the shape of the structure:

A PALACE OF TRADE
Glimpses of Marshall Fields’ New Wholesale Store and Some Facts About the Merchant Prince.
Marshall Field & Co, haring completed the fitting up of their handsome new wholesale warehouse, will open it up to the public on Monday, The building covers the entire block of ground bounded by Adams, Franklin, and Quincy streets, and Fifth avenue, and is undoubtedly the finest structure this country designed for commercial use. Its dimensions are 325 feet front by 190 feet deep, or about one and a half acres; it is seven stories and basement in height, and the total floor space which will be occupied for selling goods on all floors combined in about twelve acres The stone used on the exterior walls is Missouri granite and Massachusetts brown stone, and in the construction of the building great care has been taken to combine strength and simplicity, and to secure a superabundance of light for the interior. 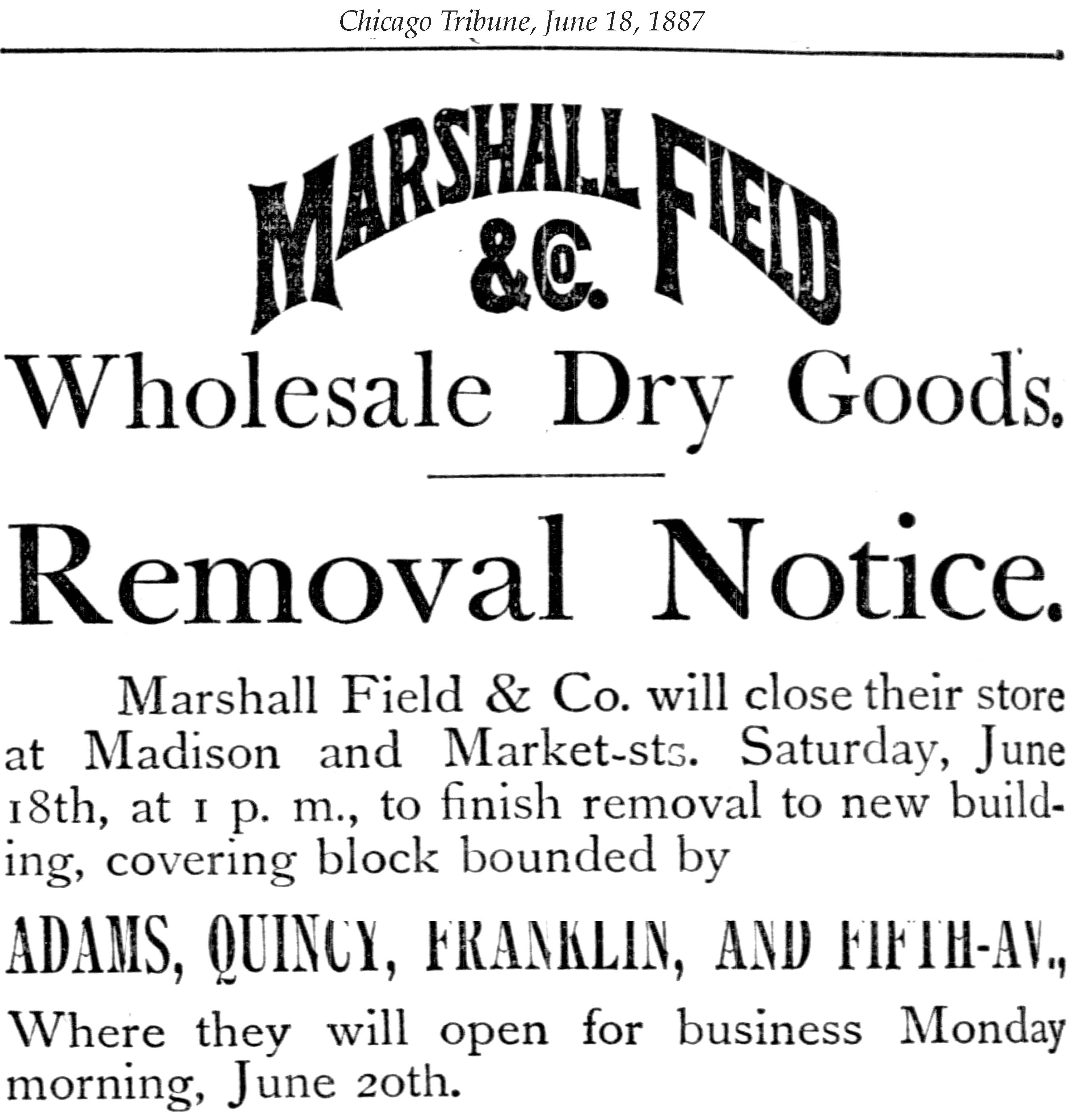 On the Adams front, there are thirteen broad windows on each floor, except the main fear, where an entrance way sixteen feet wide, furnished with three double doors, is placed in the center of the building. On the Fifth avenue and Franklin street trout there are seven broad windows on each toor, and at the rear on Quincy street a recess one hundred and fifty feet long and about twenty feet deep is constructed in the center of the building for the accommodation of the shipping department, thereby enabling the teams to load and unload under a glass and iron roof without in any way interfering with the traffic on the streets. This recess, extending the full height of the building, enables additional windows to be placed in the two wings, thereby securing more light for the various departments. On entering the building the visitor is at once impressed with its solidity and enormous size. It is practically divided into three section by two massive fire walls, running through above the roof, the two openings in each wall being protected by four fire-proof doors. In order to render the building as far as possible fire proof, what is known as the mill construction has been adopted in the construction of the floors, or in other words there is an air space between the ceiling of one room and the floor of the one above it. All the boilers used for driving the steam elevators and also for warming the building are placed in the old Newsboys’ Home Building, on Quincy street, and the steam-pipes are conveyed to the new structure through a tunnel under Quincy street, so that there will be no fire of any description in the building, except in case of an accident to the electrical lighting apparatus, when gas will be used, The sales-rooms will be lighted by arc lights and the offices by incandescent lamps, and in order to guard in every possible way against fire mercurial fire alarms and Grinnell annunciators are provided, in addition to which six watchmen will be on duty all night in the interior, and two on the exterior. There are on the outside of the building three fire escapes and five stand-pipes, to which the city fire department can attach hose in case of an outbreak of fire.

Two passenger elevators and three broad stairways furnish access to the various floors, and there are also freight elevators, all of which can be utilized to clear the building of clerks in case of an emergency, from which it will be seen that every means have been adopted to render the building fire proof and to protect those whose business requires their attendance there. There will be thirty-three departments in the building arranged as follows:

In the basement, domestics and upholstery hardware; the first story will contain the offices, upholstery goods, prints, silks shawls; the second will be devoted to cloths, flannels and dress goods; the third to underwear, blankets and cloaks; the fourth to linens, to white goods, handkerchiefs, laces, etc.; the fifth to notions entirely; the sixth to notions, carpets, mattings and oil cloths; and the seventh floor to rugs and the packing department. The firm, which in its wholesale department employs twelve hundred clerks and assistants, and in the retail department between thirteen and fourteen hundred clerks, started in 1865 in Lake street, as successors to the business of Potter Palmer, and in 1868 removed to the building on the corner of State and Washington. streets now occupied by the retail department. After the big fire the retail and wholesale departments were separated, and the building at the corner of Madison and Market streets
was erected for the wholesale trade, the retail departments being placed in the new building erected on State and Washington streets. The steady increase of business and the demand constantly made upon the firm for additional space in which to exhibit and store their goods, rendered the construction of the new building just finished an absolute necessity, and in round numbers about two millions of dollars bare been expended in the purchase of the site and completion of the structure. The firm is the largest legitimate jobbing house in the country, has branches in New York, Manchester, England; Paris, and Chenmitz, and does a business amounting to about thirty million dollars yearly. 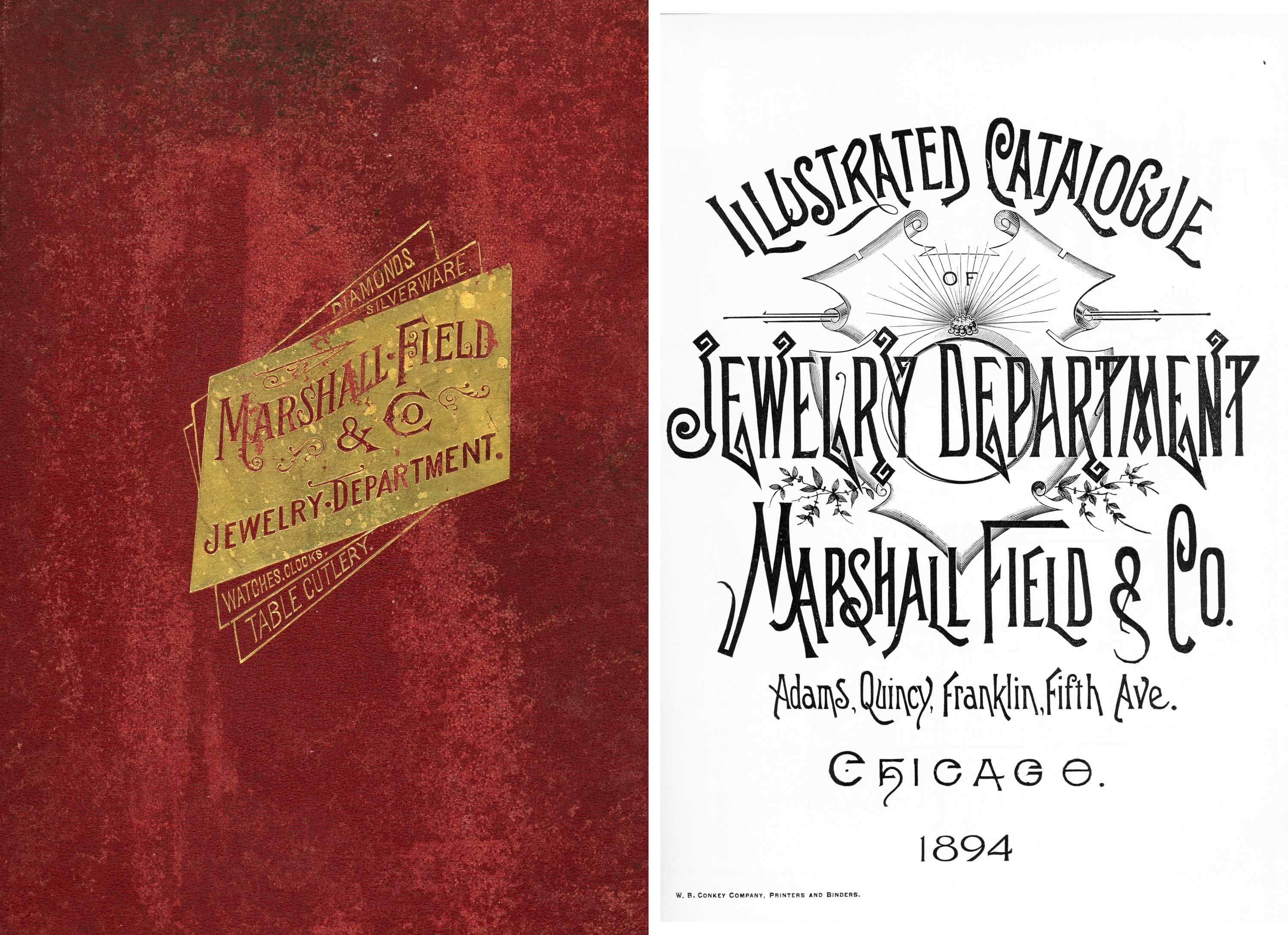 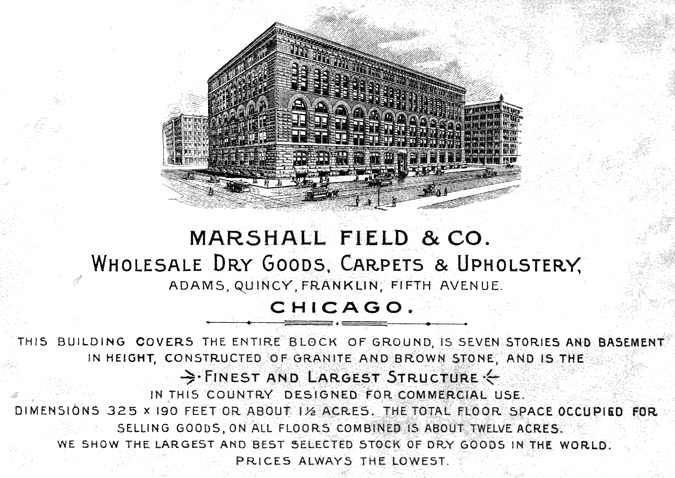 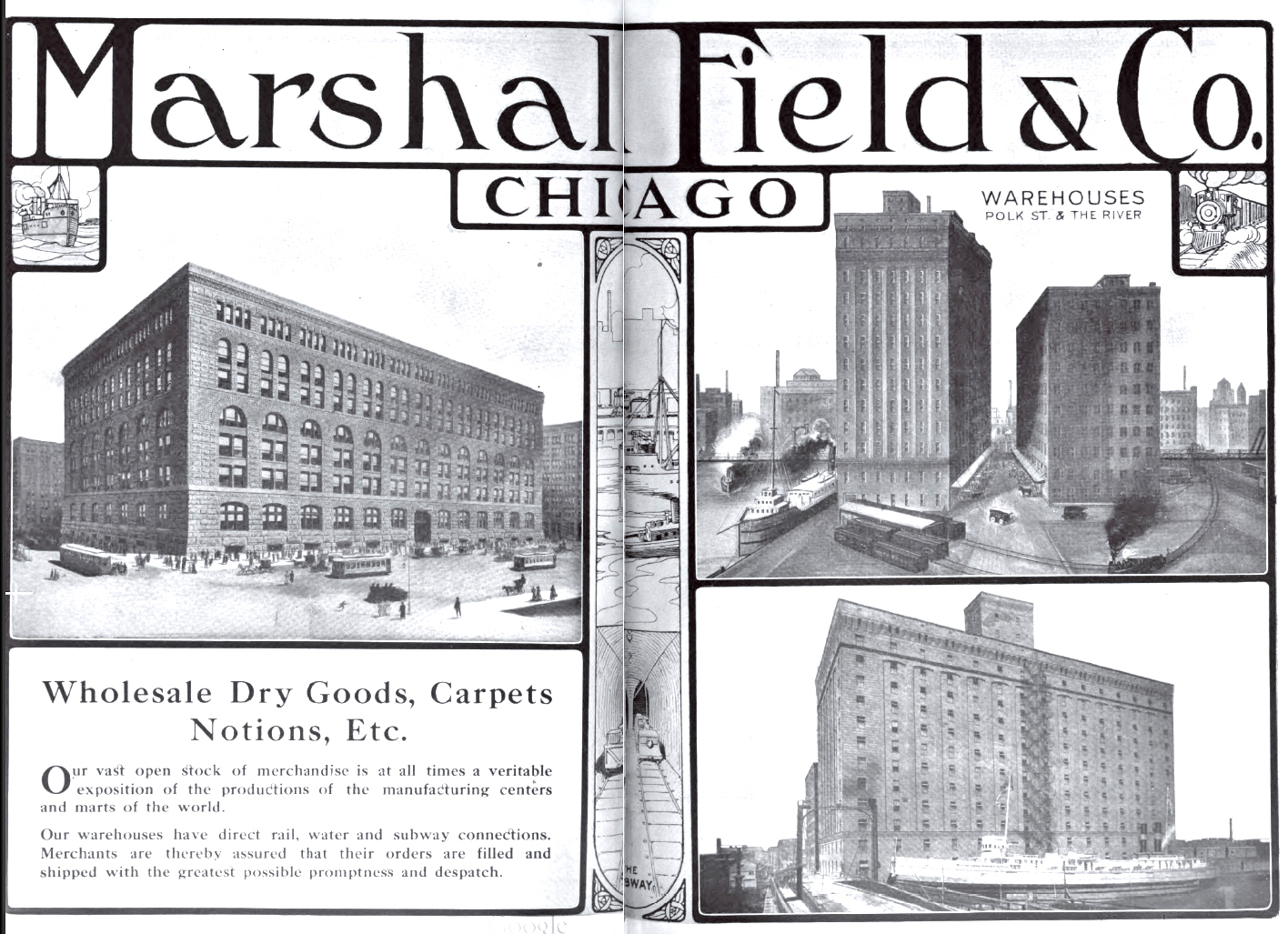 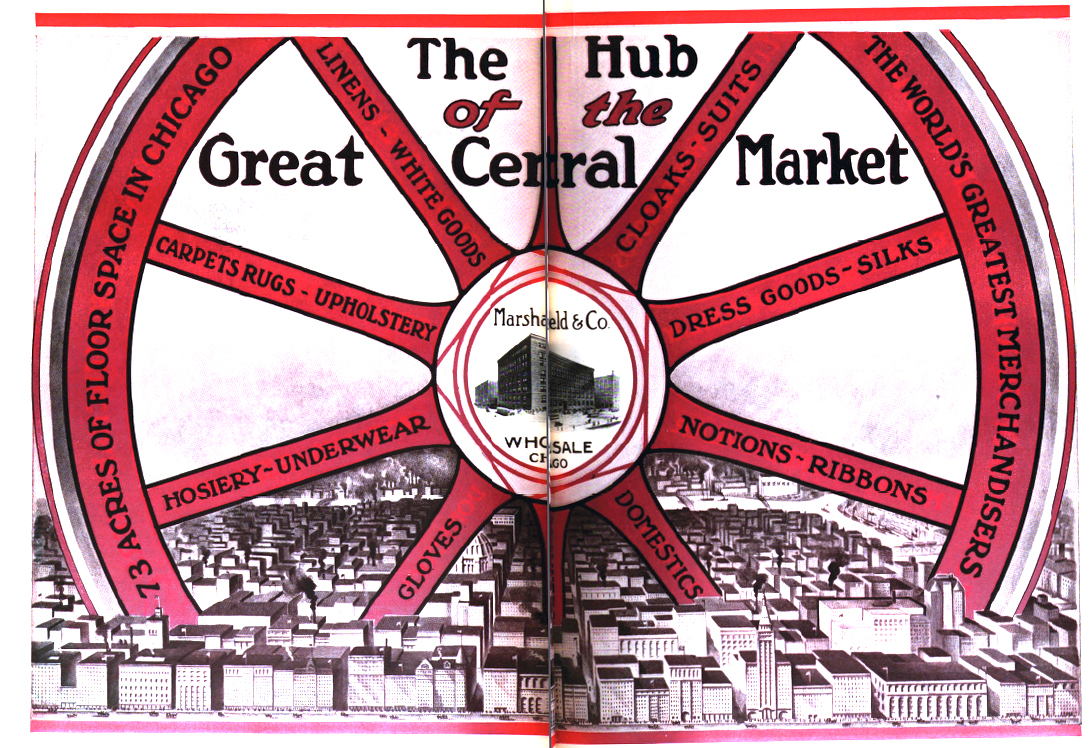 We are satisfying herewith the curiosity of the many Chicagoans who have been wondering what is to become of the huge blocks of granite forming the walls of the old Marshall Field & Co. wholesale store when that landmark is torn down. The blocks of granite will not move from their location—at least for the time being—as they will be used to fill the hole left when the old structure is torn down.

The old Marshall Field wholesale house occupies the block bounded by Wells, Franklin, Adams, and Quincy streets. The ground has been leased for a term of years to R. G. Lydy for use as an open air garage. The use of the land necessitated a level surface and it was decided to employ the old granite blocks to obtain this. It is planned to start tearing down the structure on May 15. 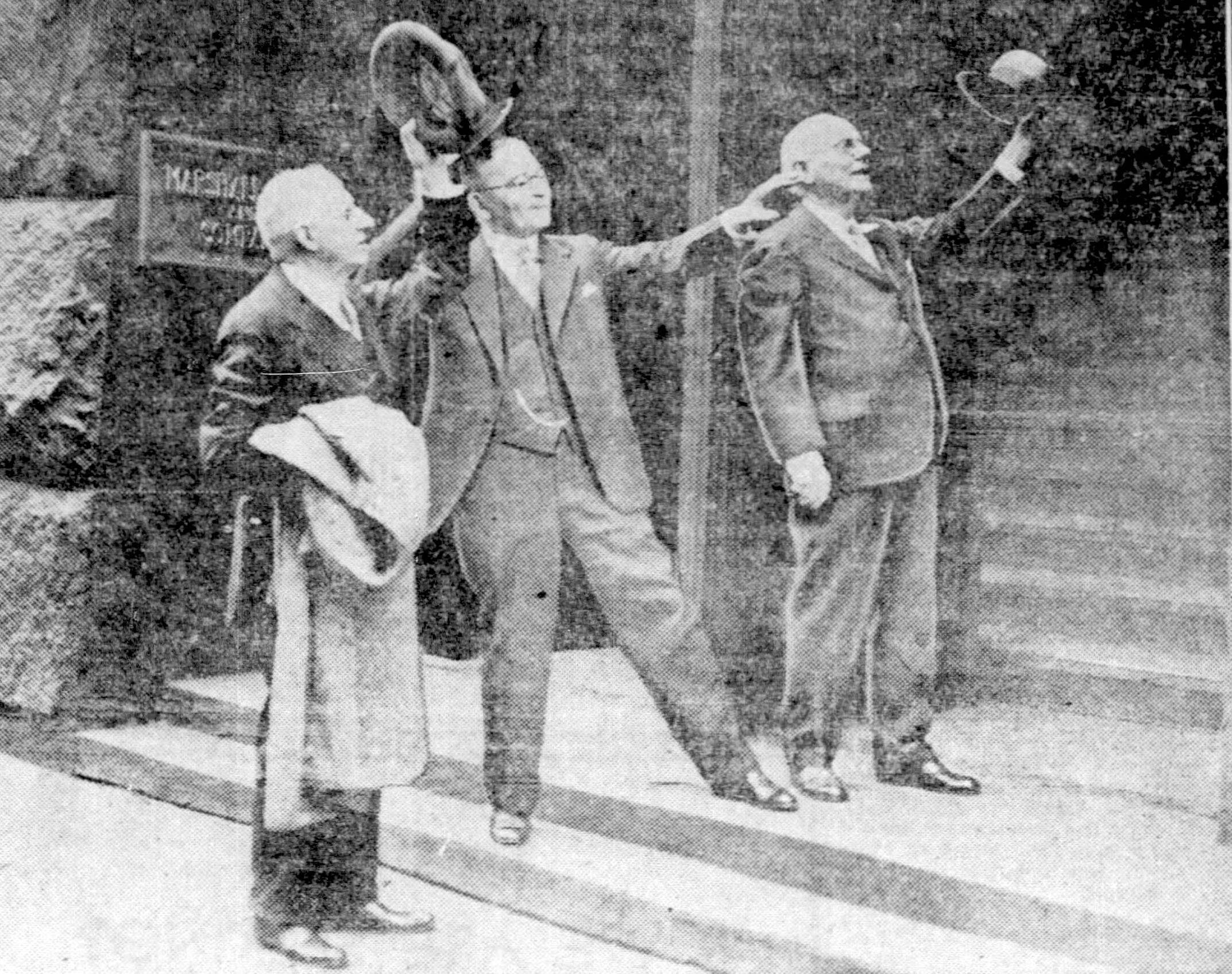 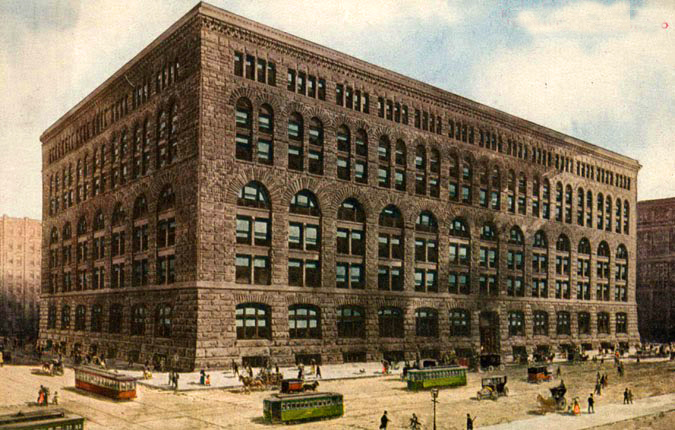 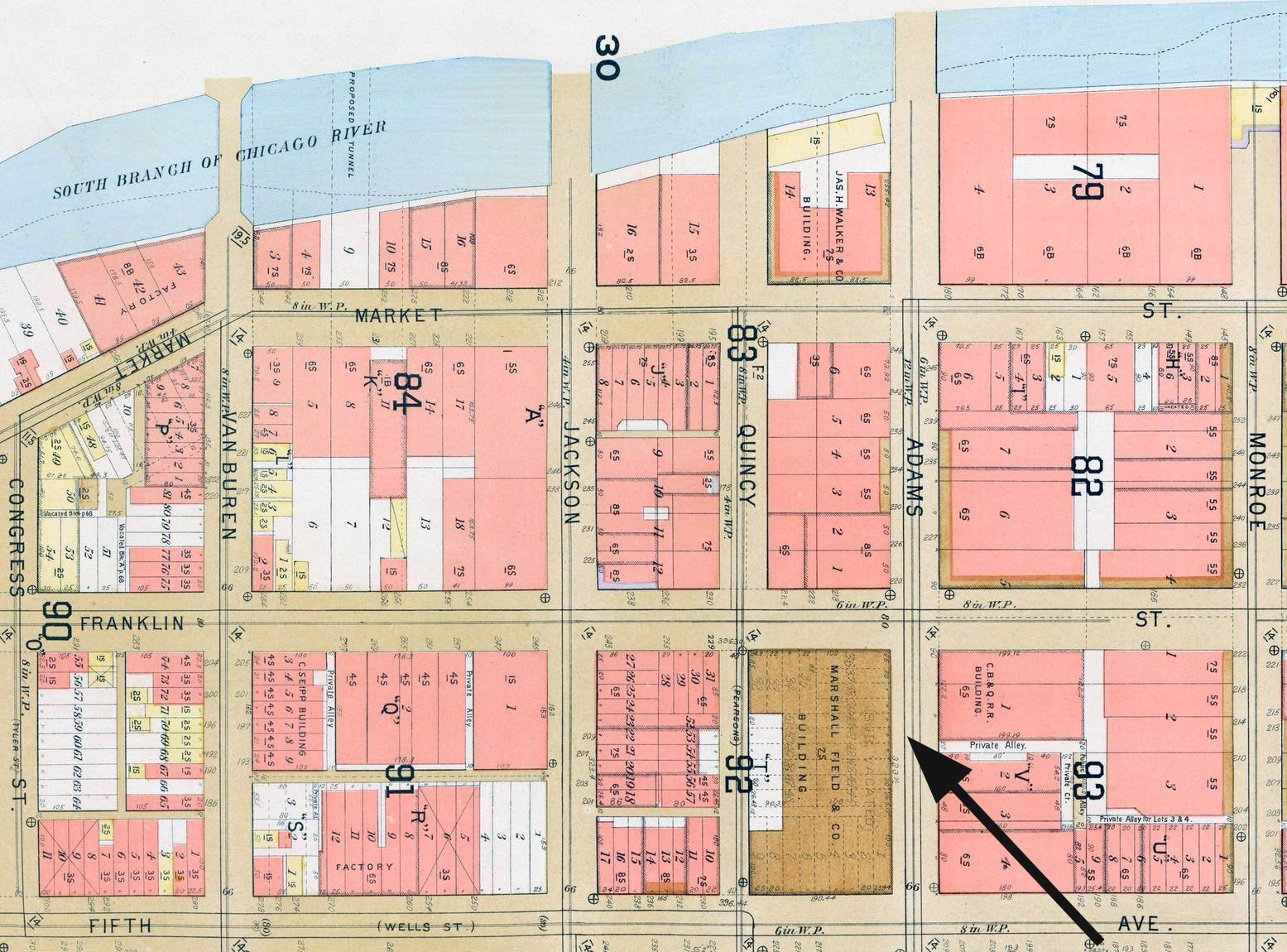 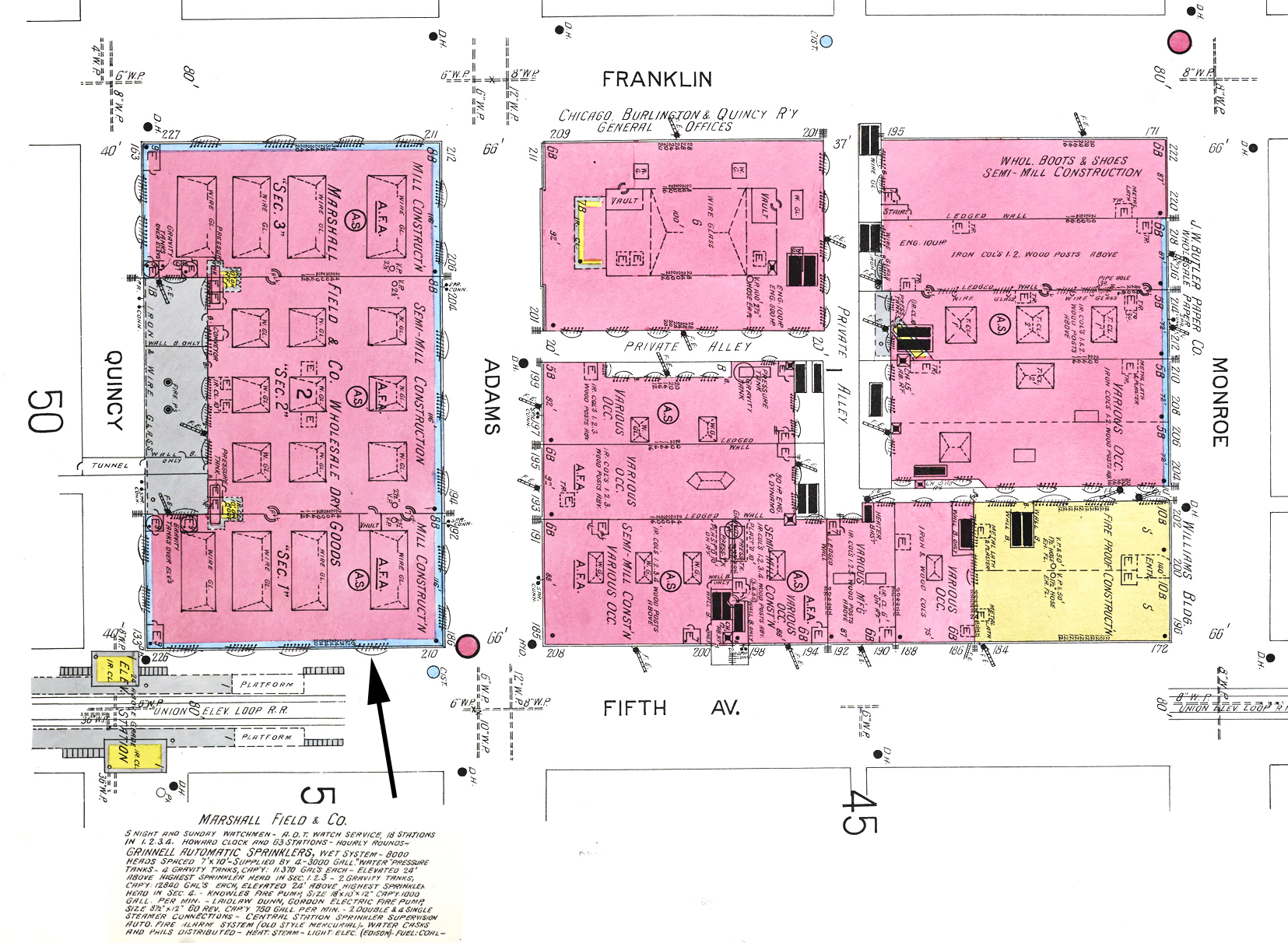