Peter and Shepard Brooks were developers of a few significant buildings in Chicago. They were;

Fourth article in a series

Interesting and historic from its nameplate on up, the Rookery at the southeast corner of La Salle and Adams streets comes as close as any other building to being the dean of the financial district. It not only looks the part, but in a large measure acts it.

For one thing, it has the double barreled distinction of being a landmark built on the site of an even older landmark. For another, its massive stone front, marble lobby, and baronial-like rooms give it an unmistakable look of permanence and authority. And it’s been a success at what it set out to be—a financial office building.

The Rookery was built in 1886 from plans by Burnham & Root, one of the great architectural firms of that day, at a cost of more than 1 million dollars. It rests on spread foundations of beams and steel rails and has columns of cast iron. There are 12 floors and a basement.

As recently as last May (1958) it was cited by the Chicago Architectural Landmarks commission for its “pioneering plan in providing shops and offices around a graceful, semi-private square (air-well).” Daniel H. Burnham, of “make no little plans” conviction, and John W. Root were not the only noted architects identified with the Rookery. Frank Lloyd Wright remodeled the elaborate court body in 1905. 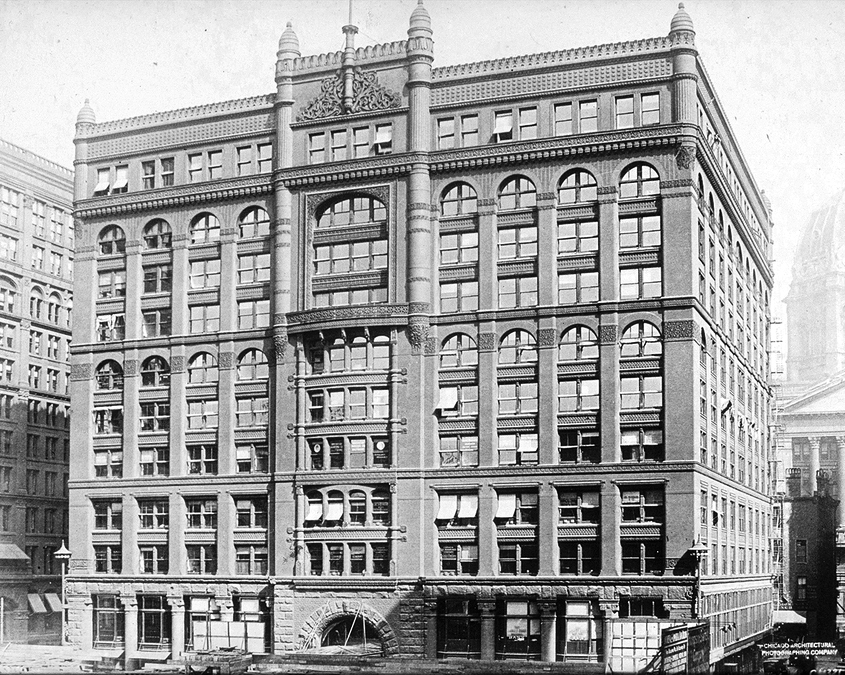 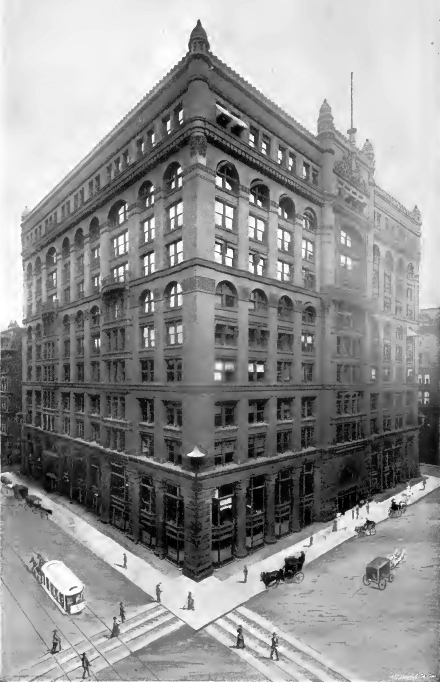 The site formerly was occupied by a city water tank, built about 1842 and surrounded, after the great fire of 1871, by a two story structure that served temporarily as City Hall. The Rookery borrowed its name from the water tank, a favorite nesting place for birds. The tank, incidentally, was the first “home” of the Chicago Public library.

Over the years the building directory of the Rookery has read like a page from Who’s Who in Chicago. Burnham himself had an office in the building and worked on his Chicago plan there, according to Louis C. Sudler of Sudler & Co., managing agency.

Judge Elbert H. Gary, who built United States Steel corporation into one of the country’s inductrial giants, was a tenant, and so were John W. (Bet a Million) Gates and Samuel Insull. The Northern Trust company began business there in a room on the second floor in 1889.

The Rookery still is essentially a financial building, with securities and insurance firms among the major tenants, said Sudler. Even the ground floor is occupied largely by financial houses. North American Accident Insurance company has been a Rookery tenant since the building opened.

The setting is old—the towering, spiraling iron stairway, the amazingly high ceilings (some 13 feet), the intricate, lacelike ornamentation, the hardwood floors—but the Rookery has offices and furnishings as modern as any building in the Loop.

Ownership has changed hands relatively few times. Title is still the name of Central Safety Deposit company, the corporation that erected the building. The Sudler firm has an ownership interest in the property. The land is leased from the city. 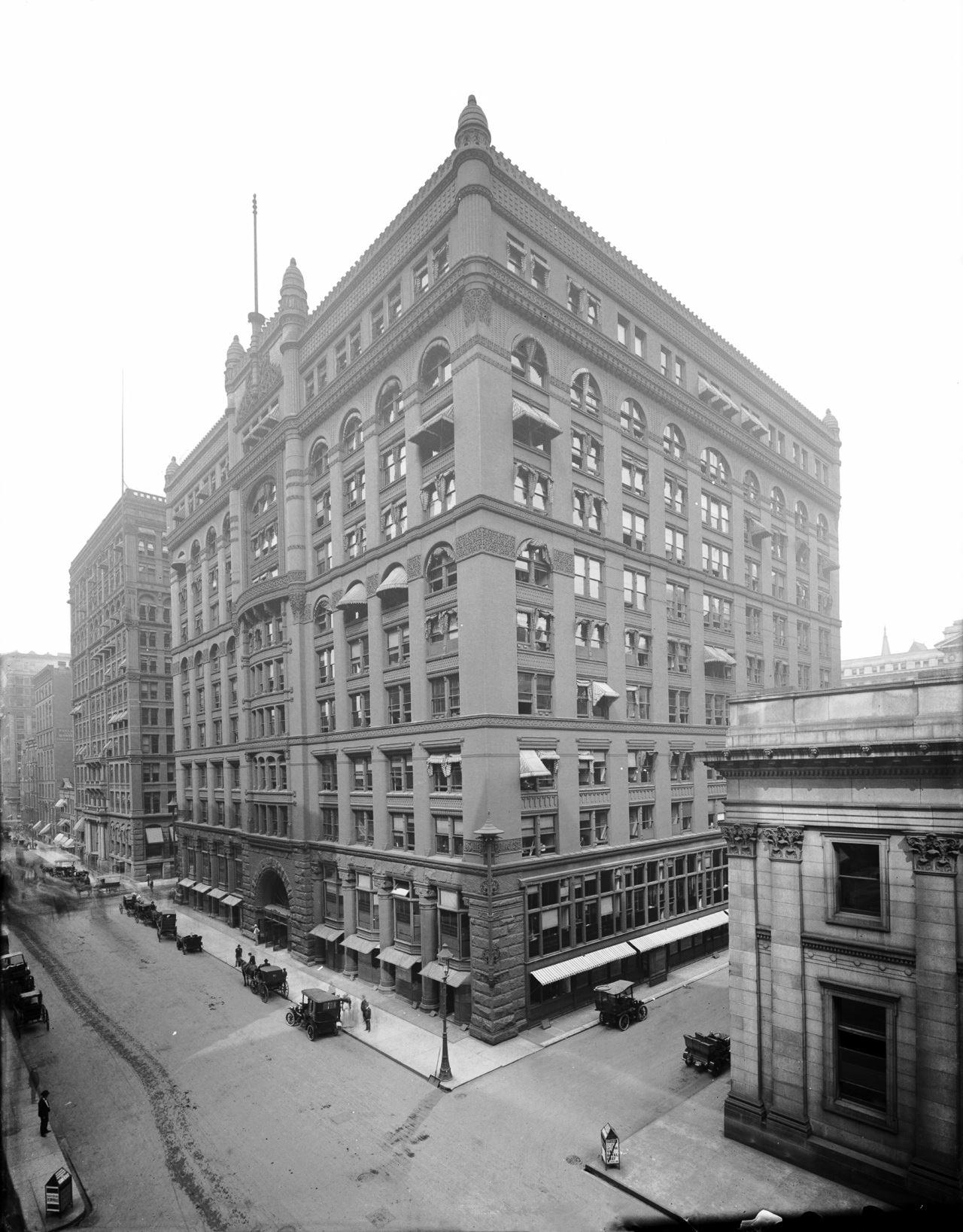 The Rookery, designed by the late John W. Root, of Buruham & Root, stan Is at the southeast corner of La Salle and Adams streets. Here, before and after the fire, was a water-tank or reservoir. The city moved on the lot with its own offices, and the Public Library occupied the circular tank. In another room were the tables of the night reporters for the daily press. Somebody in this latter room called the place the rookery because of its dilapidation. The name became popular and was adopted when the handsomest building of the times was erected on its site. The designer of this superb structure, by this triumph, even more than by his outline of the World’s Fair, supported his claim to merit; for, though the box like architecture of the Chicago “tall building” is here discarded, there is not the sacrifice of one foot of valuable spae.

Beautifully rounded lines convey all needed effects of exterior elegance. The Rookery cost $1,500,000, and stands on what is still public domain, under long lease. It is in reality a hollow square, but its lower floor is entirely covered, thus cutting away the upward vista a feature of the Masonic Temple, the Boylan Insurance, the Chamber of Commerce, and the C. B. & Q. Building. But its lower floor, nevertheless, must be inspected, as it offers many suggestions of its author’s originality. On a mosaic pavement, after passing walls of Carrara marble, the visitor stands before a staircase, and around him is a miniature city of shops and booths. Here he has a veritable arcade for bad weather, with news-stand, barber-shop, telegraph-offices, and cafe”. All the stores open into this quadrangular court, and three systems of elevators start from this floor, here being first adopted the “through elevator,” which makes no stop at lower stories. Two letter-carriers are constantly employed in attending to the mail of Ihis building, which contains 600 rooms. Burnham & Root established their own offices on the upper floor, and founded their financial reputation on the instant success of the joint-stock company which promoted the construction of the building. In the year 1884, when it was erected, the cyclopean style of architecture was still predominant, and the early stories, in syenilic granite, are examples of enduring solidity. The walls are deep all the way up, eleven stories, for it had not then been learned that steel construction is not only less cumbrous, but perfectly safe. 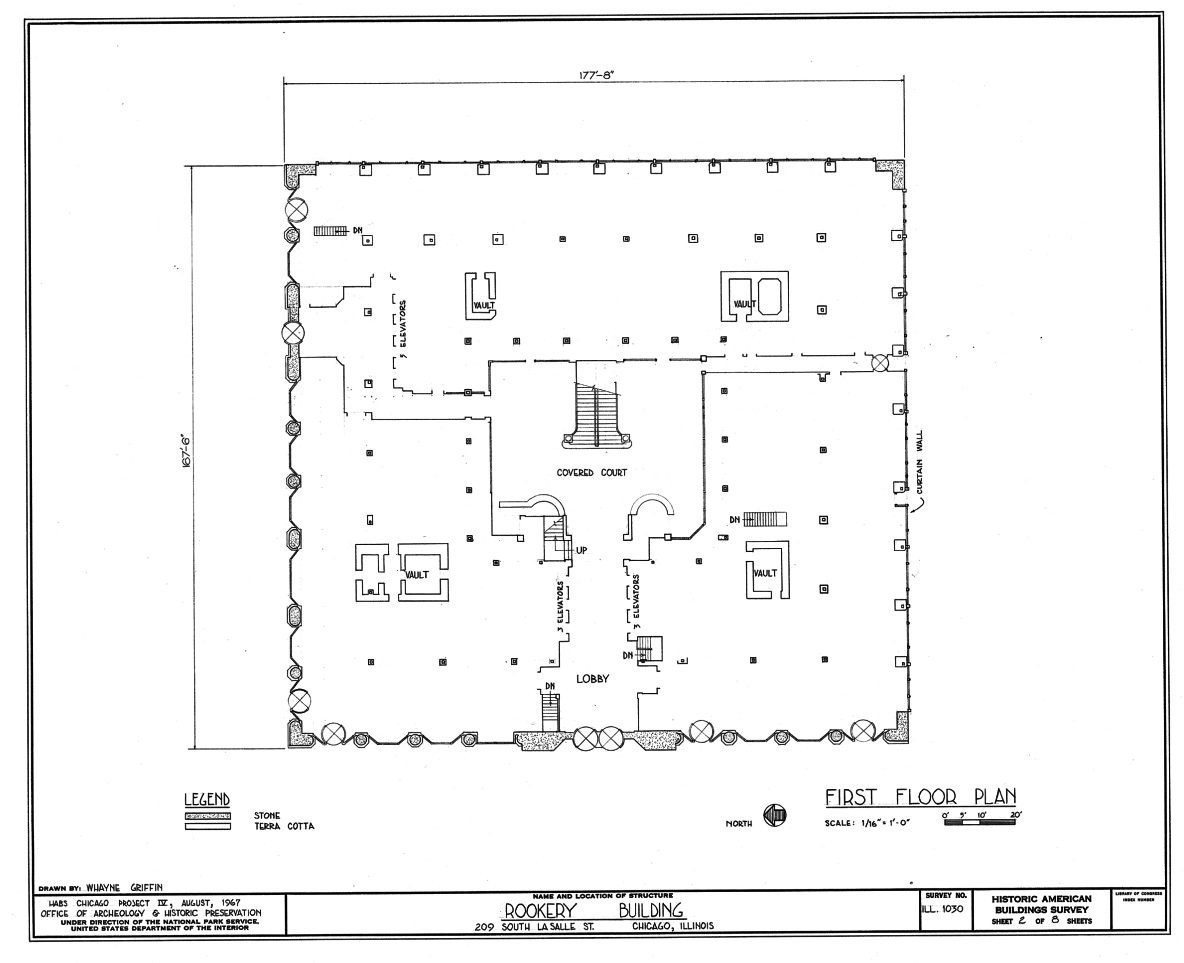 Stands west of the Lakeside, on Adams Street, and reaches La Salle Street, a remarkable thoroughfare, because of its high sky-lines, ending with the tower of the Board of Trade. Here stood the water tank, and here, in 1884, rose this splendid edifice. The Adams Street frontage is 170 feet, the La Salle 180. The height is 165 feet, in 11 stories and basement. The offices—more than 600 in number—surround a large court, and 10 passenger elevators carry 22,000 persons each day.

There are 3 freight elevators. The 5,000 occupants may be grouped as financial, but there are many exceptions. D. H. Burnham’s offices are on the upper floor. The Corn Exchange Bank and Illinois Trust & Savings Bank are located below, with many offices of brokers, private bankers, and agents. The cost of this structure was $1,500,000. It was built by a joint-stock company. 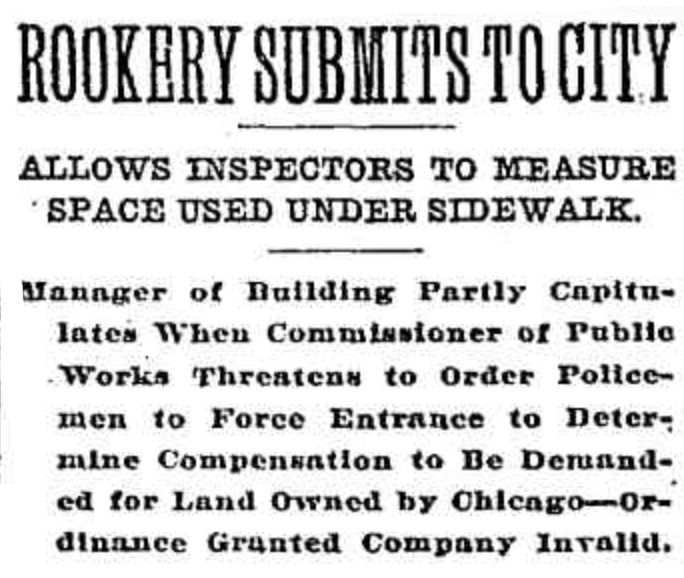 The “Rookery” capitulated yesterday to the extent of allowing an inspector for the city to examine the space it occupies under the sidewalk in Quincy street between it and the Illinois Trust and Savings. It only did so, however. after the commissioner of public works had threatened to atop the delivery of coal to the underground apace in controversy and force an entrance with police force if necessary.

This threat brought E. C, Walter, manager of the building, to the city hall in a hurry. He laid great stress on the fact the council. by ordinance of 1885, had given the Rookery company the right to occupy the space under Quinny street and asked that action be postponed until the directors of the company could have a meeting. This the commissioner refused, and then Mr. Waller gave the permit for the inspector to enter the space to it for the fixing of the compensation the city will demand,

This ordinance of 1885, the commissioner was Informed by the law department, is invalid because the city council has no power to give away space under, on, or above the streets. The ownership of the streets lies in the people of the state, and the council has no authority to alienate It. The mention of this ordinance, however, brought back many memories to the older people around the city hall.

“Roookery” Site Was Former City Hall
The land on which the “Rookery’; is built belongs to the city. The tumble down, two story building, occupied as a city hall before the present building was built, occupied the site. It was rightly nicknamed the “Rookery,” and the present office building inherited the name.

The leasing of this land to the “Rookery” company, done in 1885, was one of the scandals of the day. The public and press protested against It, but the city councils of those days were differently made up than they are now. This ordinance, along with the one closing Dearborn street and giving the Western Indiana road admission to the city, were denounced at the time as the beginning of the class of ordinances which afterward resulted In the movement which led to the election of a better class of aldermen.

History of “Rookery” Lease.
Mayor Harrison, the elder, vetoed the “Rookery” lease, but the aldermen passed it over his veto, and it stands today. Under it the city gets $35,000 a year for land for which any real estate man in the city would be glad to pay twice that sum. At the time the lease was made the Board of Trade building had just been completed, and it was known to everybody that land values in La Salle street were bound to rise. But the aidermen voted down a proposal to put a revaluation clause in the lease.

Armed with Mr. Waller’s permission inspectors George Powers and John Scanlan measured the space occupied by the building, and found it exceeded the expectations of the city. Under Quipcy street it is 91×40 feet, under the alley to the rear 18×50 feet, and urder La Salle street 178xl2½ feet. A bill will be sent in accordance.

State Street Firms Must Pay for Space.
Marshall Field & Co. until today to pay the $2,250 asked as compensation for the space the firm is using. Supt. Doherty says if it is not paid work on the Wabash avenue extension to the building will be stopped permanently. Carson, Pirle. Scott & Co. also were notified they must pay for their space, or steps will be taken to take down the entrance to their building at Madison and State streets.

E. A. Potter, president of the American Trust and Savings bank, called at the city hail and told the commissioner of public works his bank was willing to pay for the space it wanted to use under sidewalks around its new building at Monroe and, Clark streets. This is the first offer the city has received. 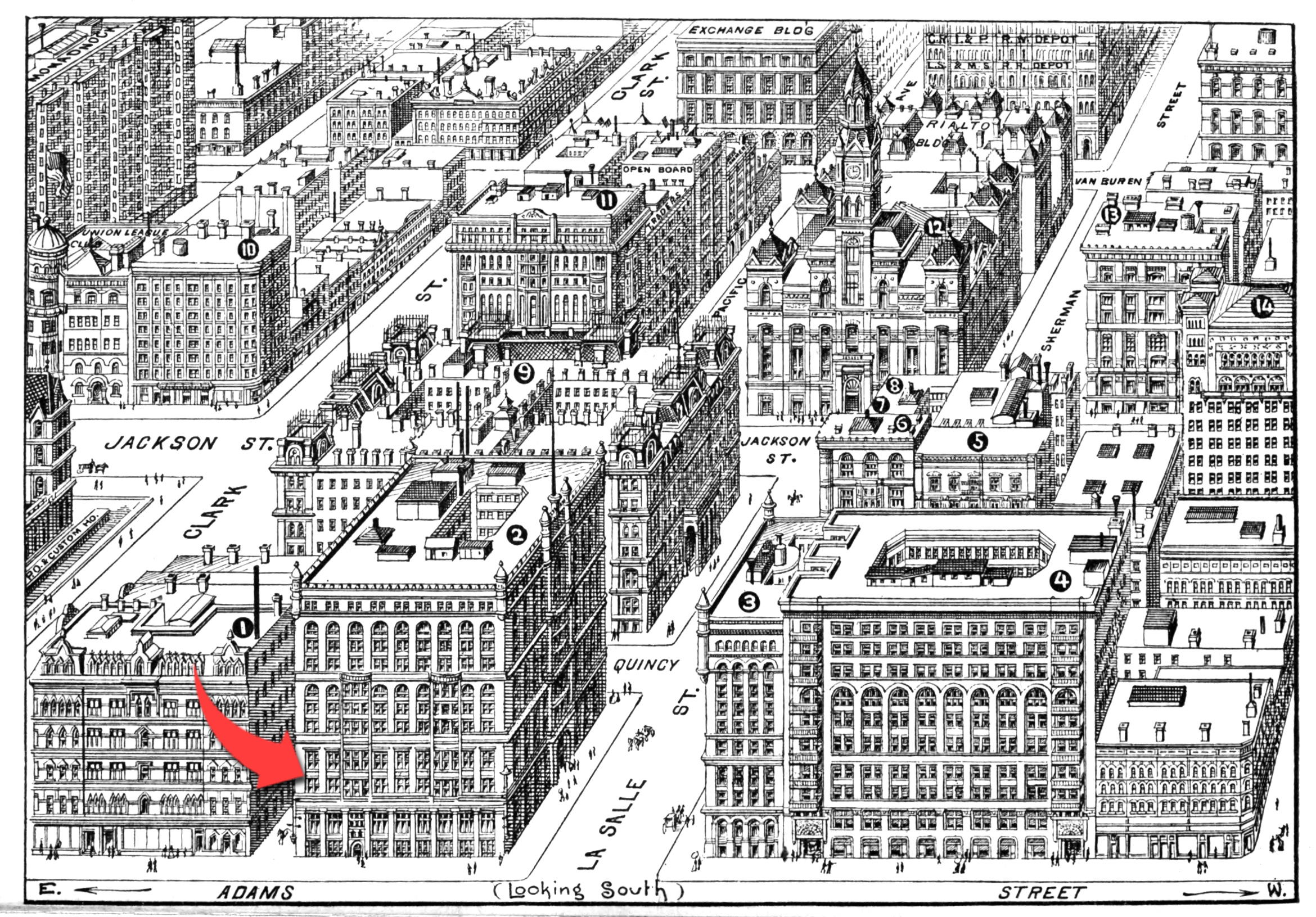 Lobby of the Rookery Before Remodeling 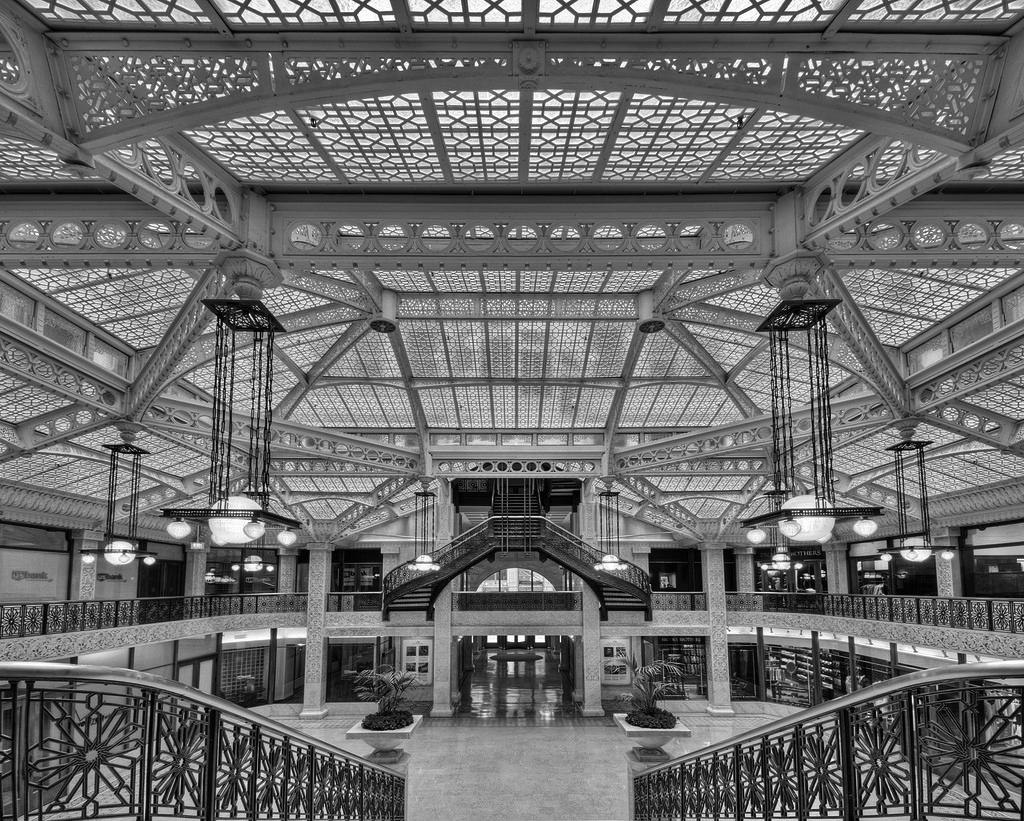 Lobby of the Rookery After Remodeling 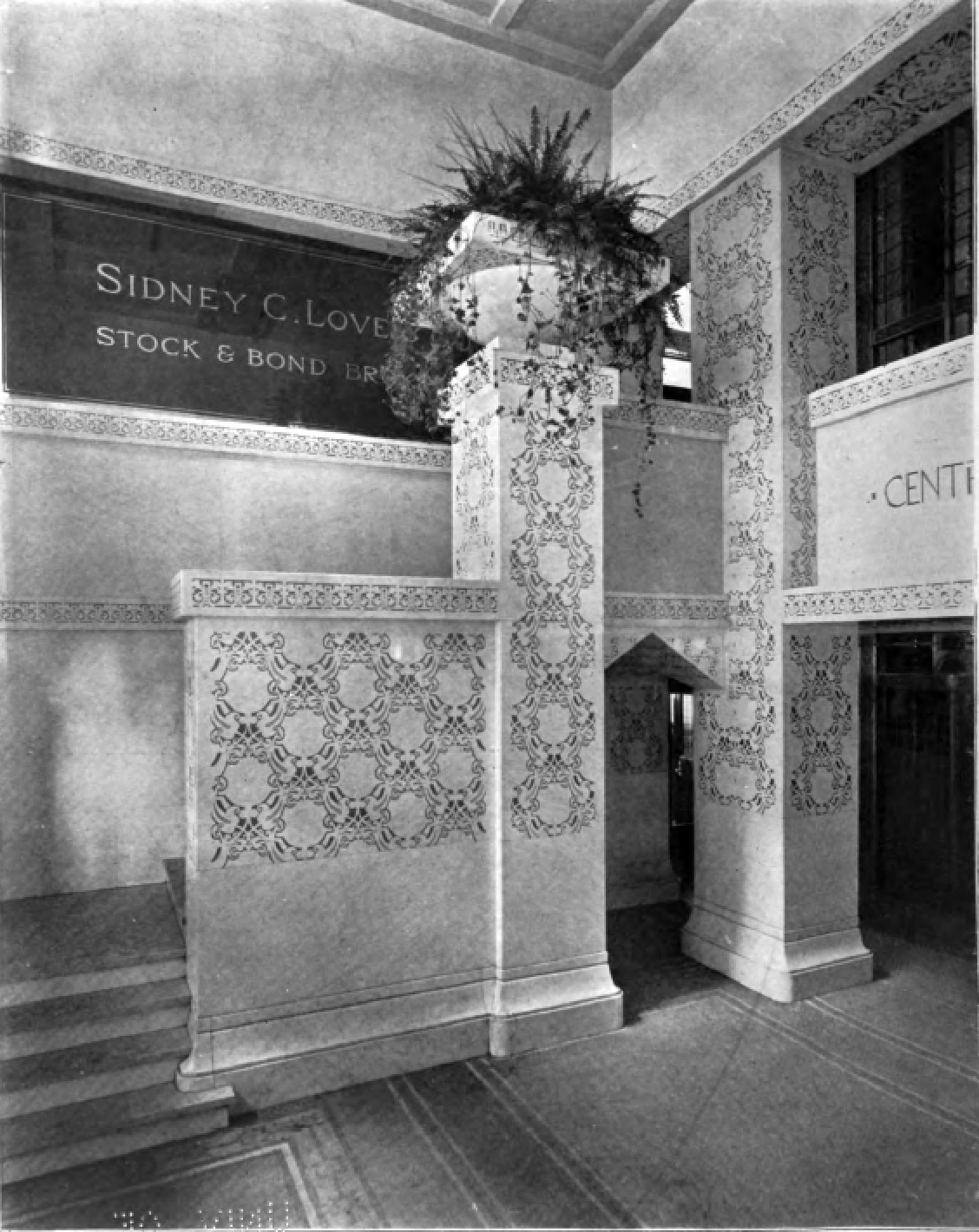