FINE ARTS building, formerly the Studebaker building, at 410 S. Michigan avenue, was built in 1886. S. S. Beman was the architect. The building is eight stories high, with one basement, on spread foundations.

The Studebaker Brothers’ Manufacturing Company were granted a permit to build a very fine business structure, which they will occupy as a carriage repository and salesroom. The new edifice will be at Nos. 103 to 107 Michigan avenue, and will be 105 feet front by 172 feet deep, 112 feet high, or eight ordinary stories and basement. It will cost $150,000.

The great Studebaker Building on Michigan avenue, below Van Buren street, is nearing completion. It will be recognized as one of the chief landmarks of the city, worthy at once of Chicago and of the great manufacturing house of which it will be representative. The error of a lady the other day in mistaking the building for the American Institute of Art, situated just to the north, was quite natural, for certainly those immense shafts of polished granite at the entrance to the Studebaker Building are the most artistic things on all Michigan avenue. 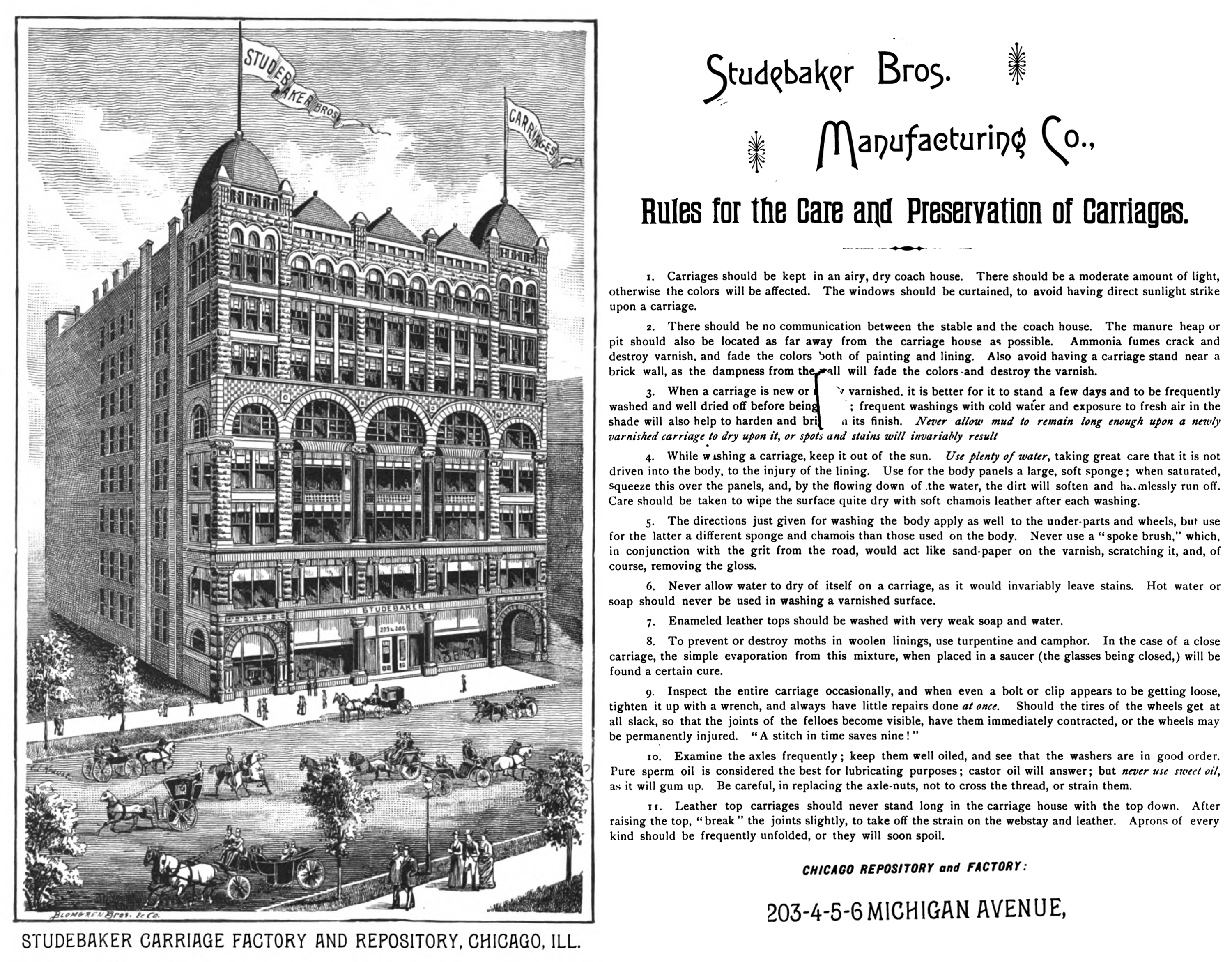 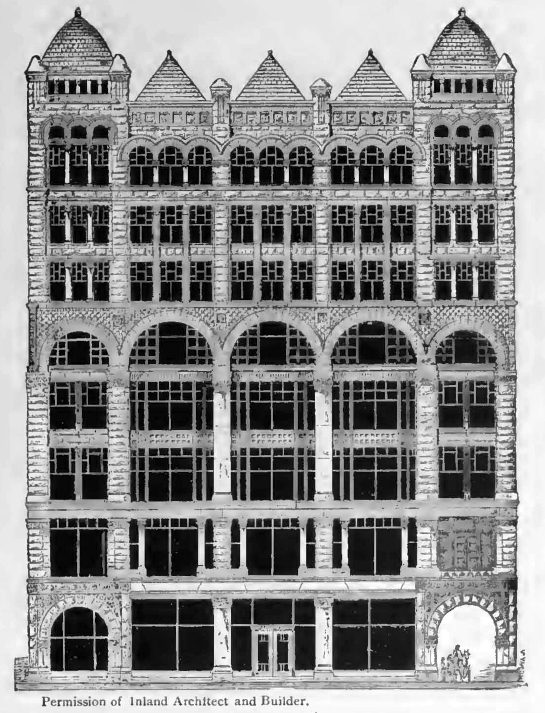 Here are a few of the carriages they produced. These were all painted by the prolific turn-of-the-century magazine illustrator, C. Gray-Parker. 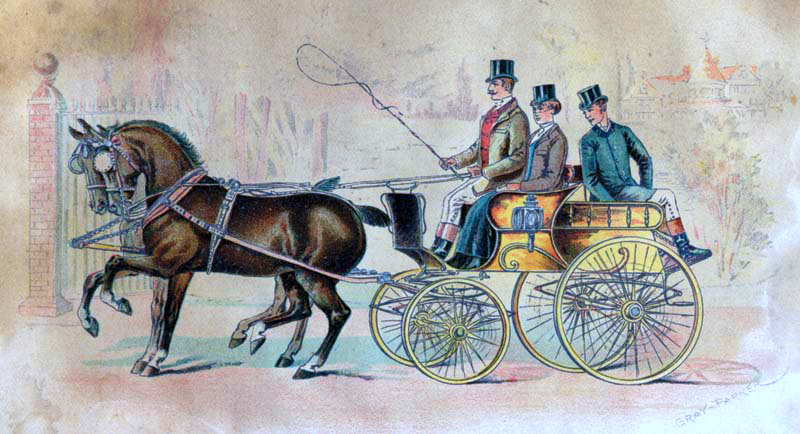 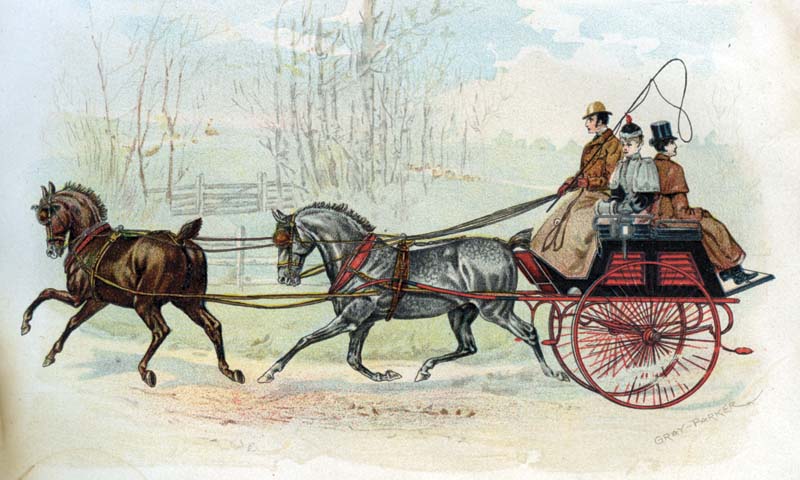 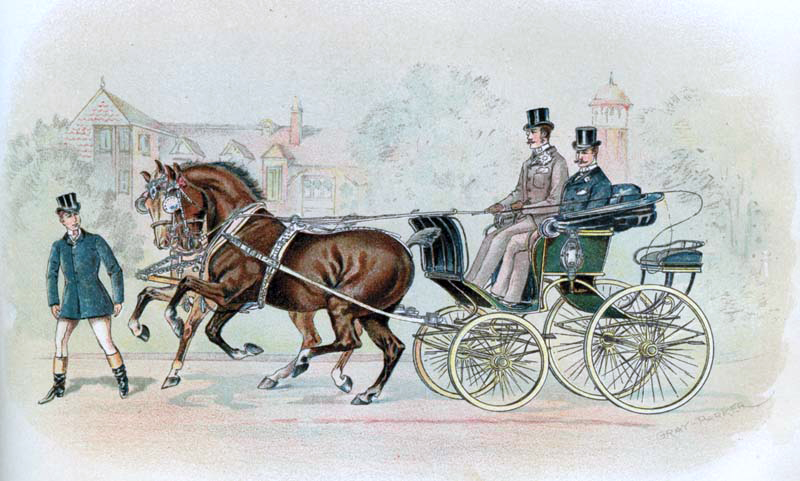 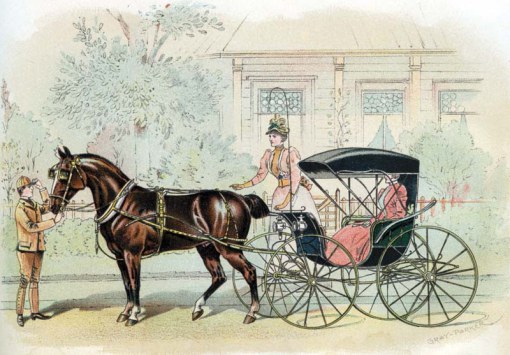 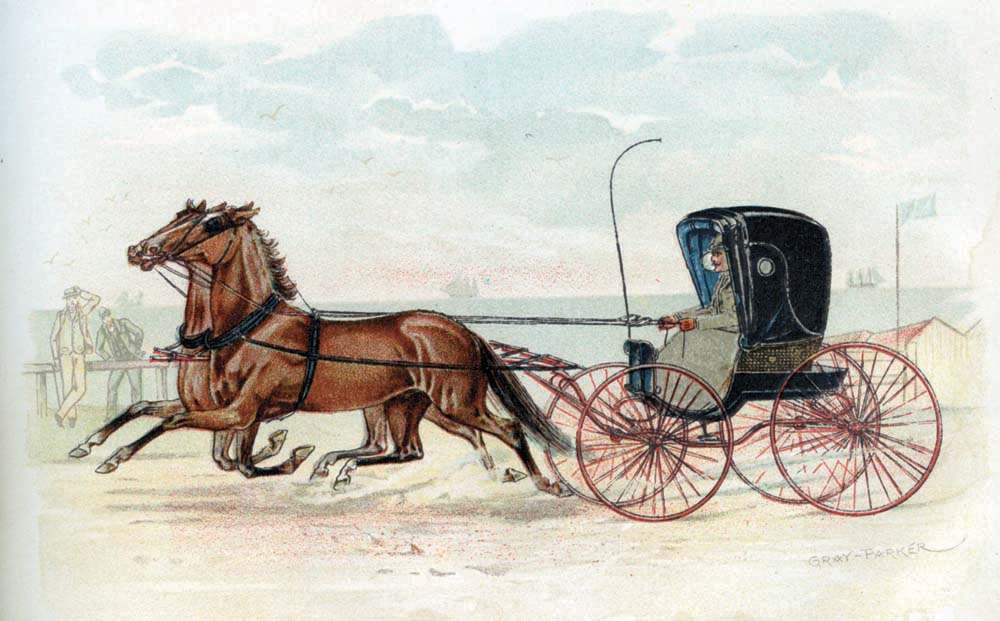 Inter Ocean, August 7, 1898
The New Music Hall.
The monumental Studebaker building on Michigan boulevard, now known as the Fine Arts building, tenanted by musicians, painters, sculptors, and representatives of the allied arts, furnishes a new art center which Chicago may worthily regard with pride. Charles C. Curtiss, who has promoted the enterprise judiciously and artistically and has been liberally aided in all regards by Hon. Frederick S. Fish, who has represented the interests of the Studebaker company, deserves great credit. Aside from the fine accommodations for the artists, the beautiful parlors for the Women’s club and various literary clubs, the music halls command attention as a most inviting place for public assemblies. The large hall opens directly into the marble foyer on the first floor, and the work and plans as far as it has progressed indicate a remarkably handsome auditorium. The lines indicate a commodious structure, on the plan of European opera-houses, in the loggias surmounted by great Corinthian columns with elaborate capitols. At the rear of the hall are two spacious balconies, broad promenades extending around the hall from both these projections.

The ceiling is very elaborate in its plastic decoration, likewise the proscenium arch that spans the stage. The stage is thirty-two feet deep and fifty-seven feet in width, and will be completely stocked with scenery, and will have, in addition, a large three-manual pipe organ. The decorative designs (in old ivory, red, and gold) under consideration are extremely rich, befitting the fine architectural outlines. This half, like the building, is absolutely fireproof, has ample exits, and will have opera chairs for 1,600. On the same property, in the rear of the fine building occupied by the Chicago Musical college, is a smaller concert college hall, that will be equally handsome in design and rich in furnishings. It has only one balcony, and will seat 700 people. It has a completely equipped stage, 27×22 feet, and a two-manual pipe organ. These halls, beautiful in design and complete in every detail, furnish a valuable addition to Chicago’s already large facilities for holding entertainments.

The Fine Arts Building, fronting Lake Michigan between Van Buren and Congress Streets is the most prominent feature of the finest block of buildings in the entire city, including the buildings of the Chicago Club, the Auditorium Hotel and the Congress Hotel. It is the center of the highest artistic, literary and educational interests of the city, and contains three auditoriums, which are considered superior in elegance of architecture, decorations and appointments to any heretofore constructed. 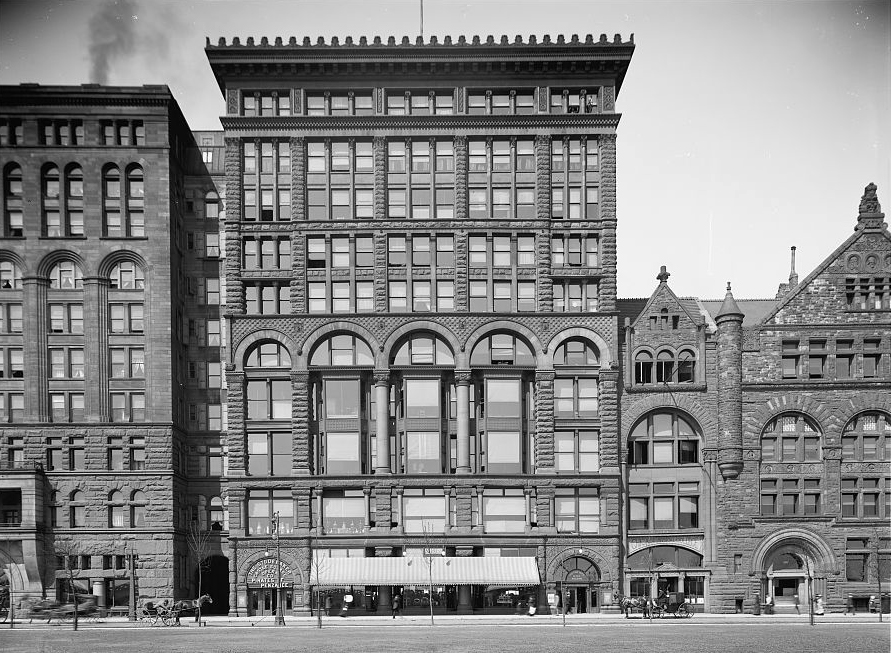 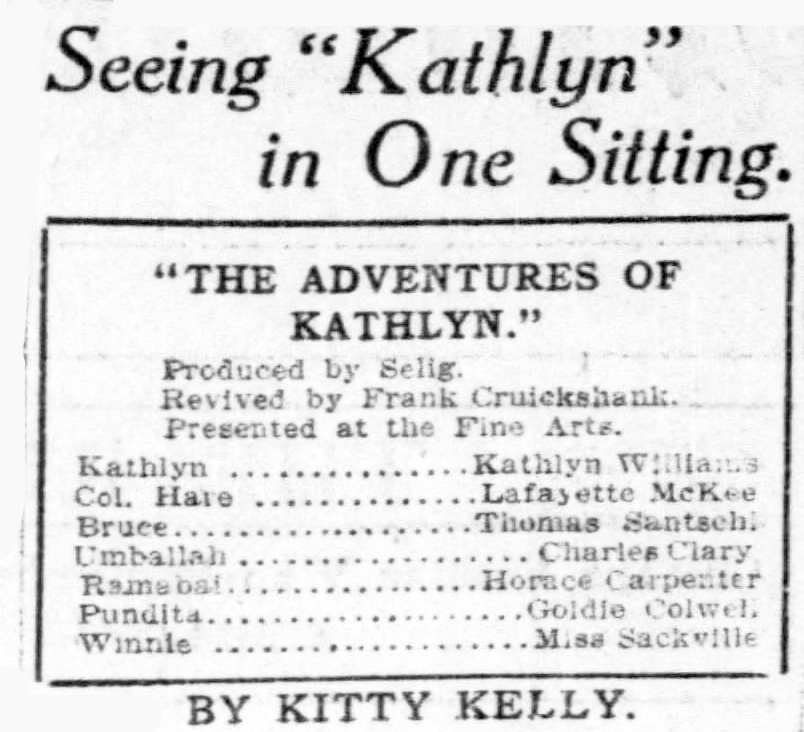 “KATHLYN” has come back. Kathlyn who went adventuring amongst disguises and jungles along in the years 1913 and 1914. Her serial ways have been reduced to two hours’ performance, which is supposed to chronicle the highlights of her Amazonian adventures, minus the padding that existed in the prolongation of the suspense her ways with the wilderness were supposed to excite.

This is the acorn from which the mighty oak of serials sprung, the seed sowed by The Tribune, the Selig company, Harold MacGrath, and Gilson Willets, in these three years has spread into a husky serial crop, with perils and palpitations rising to their climax and now giving way toward the real story serial, to be manifested in the upcoming Billie Burke continued photoplay

As such an honored sample of originals “Kathlyn” is especially worthy of attention. Considering the great leap of picture progress occurring within just the year, the photoplay accomplishments of “Kathlyn” are remarkable. It is characterized by excellent photography and it moves briskly to one point or another, though little things like logic and plausibility are lacking as ingredients.

The closeups of the animals are interesting and effective, but they don’t strike specially active thrills a-travel down one’s vertebrae. Of course, fashion in thrills has changed. Since “Kathlyn’s” pristine day we have had more of them and more serious ones, till now we are accustomed to enduring tumbles from skyscrapers and seeing people jump from aeroplanes to moving trains and other little feats of that sort with scarcely the w. k. flicker of an eyelash. So when Kathlyn registers wild fear in one section and then in the next we see some lions placidly traveling across the screen, pulses don’t pulse particularly extra fast. But fashions never do stay the same.

Kathlyn herself as heroine is a most put upon lady. She never has time, robed in a diaphanous negligee, to take tea on a chaise-lounge. No, she has ever to be up and hustling from one disguise into another, getting crowned, escaping, helping someone else to escape, being recaptured, busily and repeatedly before “the curse of inheriting the crown of Allaha” has been removed from her family and she has a chance for the pink tinted silhouette kiss of finale.

As reminiscence of a very important step in picture procedure, “Kathlyn” is thoroughly worth seeing. Moreover, in these days of advertised “sirens” and generally flaunted film wickedness it is a rare relief for its absolute respectability. There isn’t a thing to offend the nicest minded.

Frankly, there are situations to provoke a smile from present day sophisticated seers, but the seers enjoy the smiling. The houseful yesterday was alert with comment. Apparently a pleasant time was had by all. 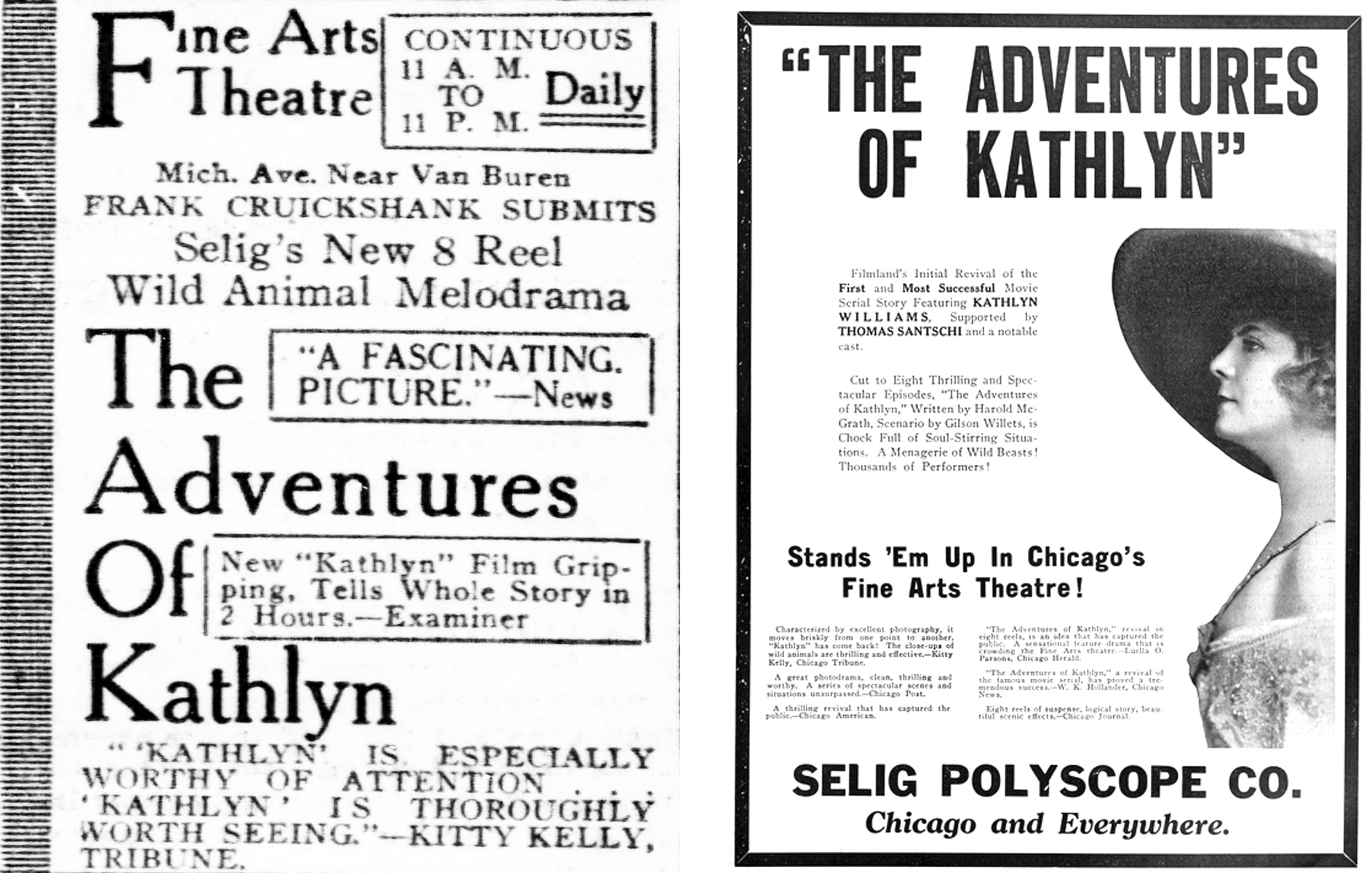 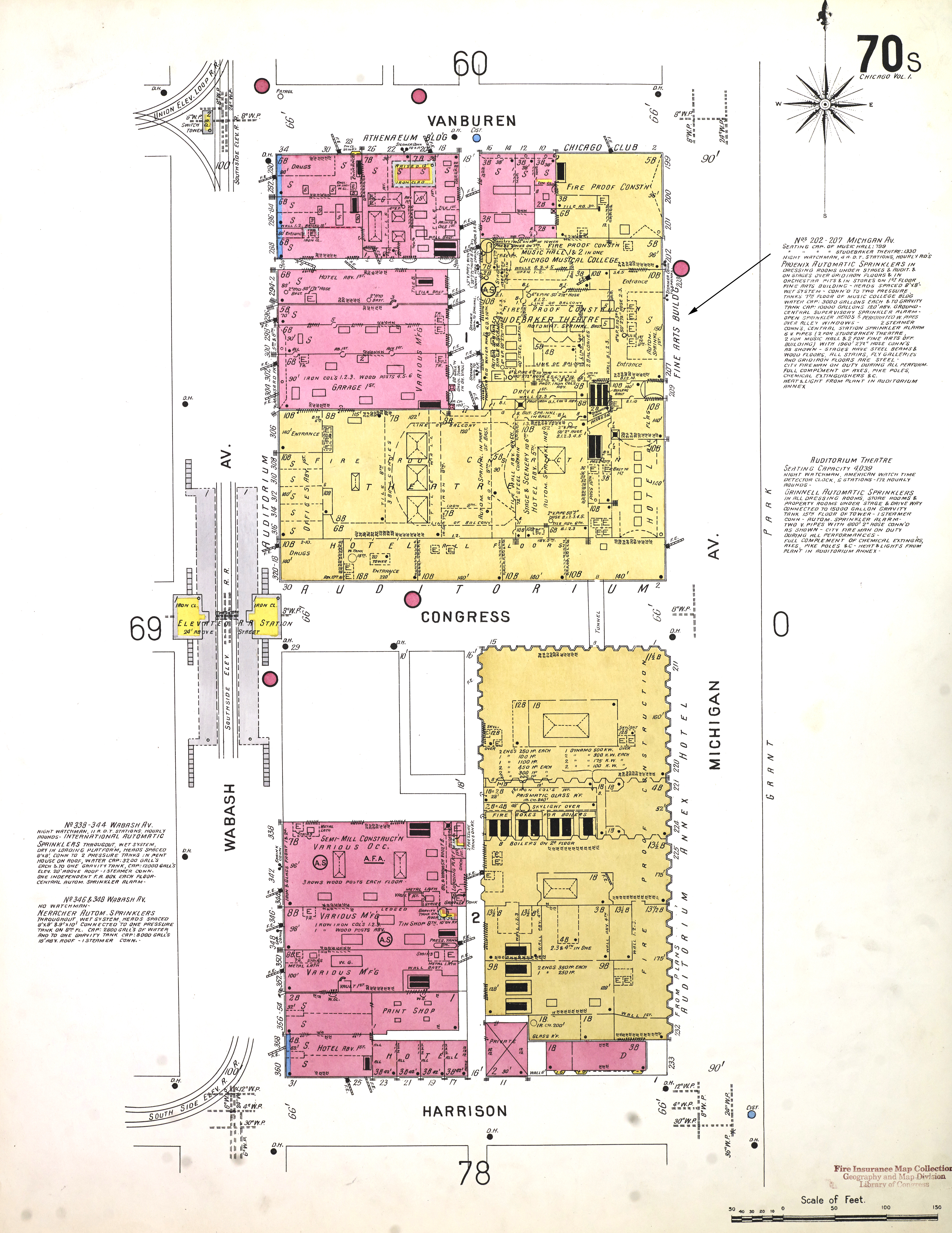 Studebaker moved to a new facility, described below:

The Studebaker Building (remodeling), at Nos. 378 to 388 Wabash avenue, is nearly completed. Its cost is $250,O00. In size it is 120×150 feet. The Studebaker Bros. Manufacturing company, for whom the building is built, will occupy the main floor, basement, and second floor, and the balance of the ten stories will be divided to suit tenants. The building contains some novel features in the way of plate glass fronts, making it one of the lightest buildings for salesrooms in Chicago. The front and rear of the building contain 95 per cent, making it the lightest building in the city. In addition to this feature there is a light court in the center of the building. The front, except for the glass, is constructed of pure white terra cotta and the entrance is in marble and mosaic. The structure will be of the Gothic style of architecture. Freight and passenger elevators will be in the building and each floor will have toilet-rooms. S. S.Berman is the architect.

Currently, true to its name, it houses artists’ lofts, art galleries, theatre, dance and recording studios, interior design firms, musical instrument makers, and other businesses associated with the arts. It also holds offices of the Daughters of the American Revolution, the Jazz Institute of Chicago, the Grant Park Conservancy, the World Federalist Association, the Chicago Youth Symphony, the Boitsov Classical Ballet School and Company, and the venerable Artist’s Cafe, known to generations of late-night diners. It was designated a Chicago Landmark on June 7, 1978.