Chicago has long been famous as the pioneer office building center on this continent, but its fame has not been confined to that fact. It also has been noted because its buildings have been of the most perfect type. Although they have by no means been the highest nor have the exteriors been so elaborate and showy as some of the skyscrapers of New York City, the interiors have been finished better and more completely appointed, in so far as modern equipment and conveniences are concerned, than those of any city in this country.

However perfect the older structures and buildings of recent construction may have been, those now in prospect aud on which work is being commenced will surpass in many ways buildings which a few years ago were pronounced perfect.

New York no longer leads Chicago even in the matters of exteriors, evidence of which is to be found in such structures in this city as the (Blackstone, La Salle and New Sherman hotels, tbe Harris Trust, the University Club, Railway Exchange, Peoples Gas, the Steger, McCormick and others of the handsome big office structures which have gone up in the last few years. 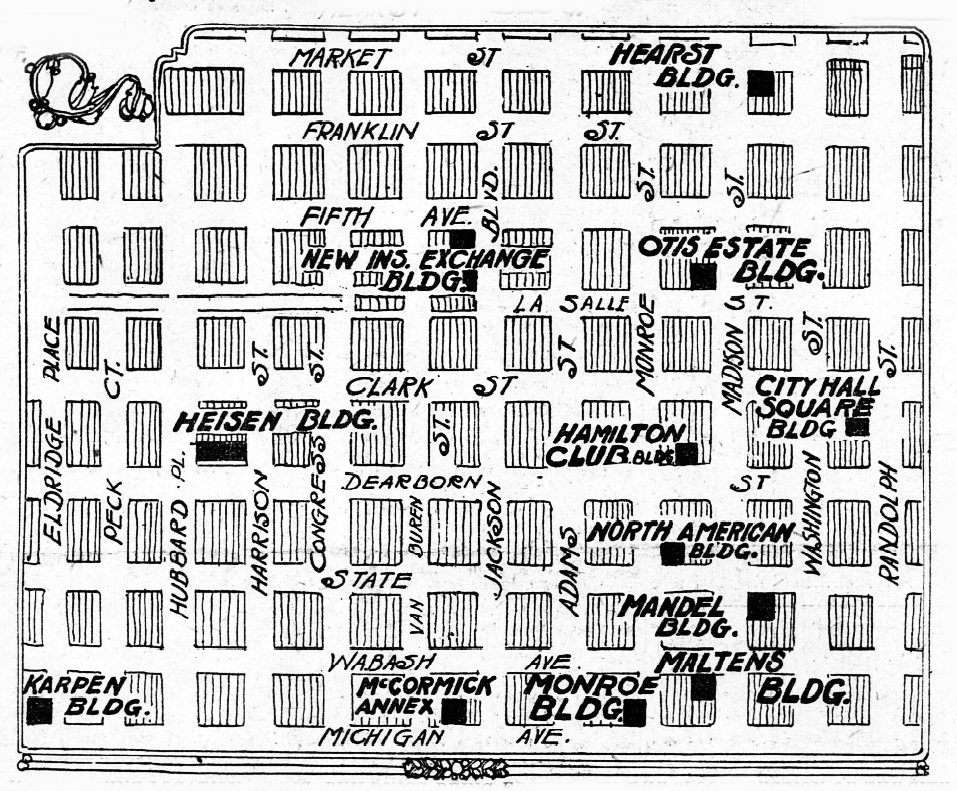 Building construction goes in waves. Chicago was the pioneer with the first large number of big office buildings. Then New York followed with a greater number not only higher, but with more showy exteriors, Chicago having dropped behind. Now a great wave of enterprise, industry and prosperity is sweeping over this city and Chicago is surpassing New York City in the number, beauty and magnitude of office buildings in process of construction. On the other hand, office space in New York City is going begging and few new buildings of great magnitude are being constructed there. This, however, will not last long, as a big demand will again spring up for office space in the metropolis, which will naturally be followed by a big boom.

Many Land Marks Demolished
Never before have so many landmarks been demolished in this city to make place for handsome office and mercantile structures.

At the southwest corner of Jackson boulevard and Sherman street the Brother Jonathan Building, erected by the late Jonathan Clark, and four other structures have been razed to make place for the Insurance Exchange Building, a twenty-two story office structure, representing a total investment of $7,000,000, of which $3,000,000 is in the land and $4,000,000 in the building.

This building is of unusual significance because of the fact that it is to be the great fire insurance underwriting center of the city. Over six months ago rentals were closed with 140 tenants for eleven floors under leases running for thirty years, and this before some of the ground was purchased; a thing which «as never before been done in this city. The building will front 200 feet on Jackson boulevard and a like number of feet each on Fifth avenue aud Sherman street. Max Pam and Ernest R. Graham of D. H. Burnham & Co. are the promoters and owners.

C. C Heisen. a pioneer in Dearborn street office building construction, Is erecting a twenty-two story office building (Transportation Building) at the southwest corner of Dearborn and Harrison streets, the cost, including the land, being $3,000,000.

New McCormick Skyscraper.
When R. Hall McCormick, trustee of the Leander J. McCormick estate, completed the twenty-two-story McCormick building at the northwest corner of Michigan boulevard and Van Buren street he was afraid that he would not have a sufficient number of tenants to fill it, but in this he was agreeably disappointed and is now tearing down the buildings on the land north and adjacent, on which he will erect a twenty-two story building, occupying practically the same area, 100x171feet, as the original McCormick Building erected a year ago.

The building which is expected to be the most ln keeping with the Chicago beautiful idea is the Monroe, which will be erected by the Brooks estate at the southwest corner of Michigan boulevard and Monroe street, as the owners have tried to obtain ln the design and in keeping with the neighborhood a building of the highest order, the architecture closely approaching that of the University Club, at the northwest corner of the same thoroughfares. The Monroe will represent an investment of about $2,500,000, of which $1,000,000 Is in the land.

The North American will be the highest building on State street. It will be erected at the northwest corner of State and Monroe streets and will represent a total investment of approximately $3,500,000, the land being valued roundly at $2,000,000 aud the building will cost about $1,500,000. Louis M. Stumer, Benjamin J. Rosenthal and Louis Eckstein are the owners.

John B. Mailers, one of Chicago’s pioneer builders, will tear down the old Continental Hotel, at the southeast corner of Wabash avenue and Madison street, famous in the early days of tne city as the home of theatrical people, on which he will construct a twenty-story office building to cost $1,000,000. The building will probably rented by the time it is finished.

Mandel Building to Cost $1,500,000.
Mandel Brothers are constructing a fifteen-story mercantile building at the northeast corner of State and Madison streets to cost $1,500,000. The building at 81-83 Clark street, in which the late L. Z. Leiter had his offices for so many years, and the building on the north, 75-79 Clark street, where A. S. Trude had his offices for over a quarter of a century, are being torn down to make room for the twenty-story City Hall Square Theater and office building, which will cost about $2,000,000. The land value is approximately $1,000,000. James F. Heyworth is at the head of the syndicate and the confidence of his friends in the enterprise was such that the stock of the company was subscribed four times over when he announced his plans.

Three old buildings, landmarks, at the southwest corner of La Salle and Madison streets are being removed to make way for the Otis Building, a twenty-story structure to be erected at that place, involving a total investment of $5,000,000 equally divided between the land.and the building.

There are as many more big projects in sight, but operations have been commenced on all of the forgoing, while it will in all likelihood be some time before work is commenced on half a dozen others to which attention has frequently been called in these columns.