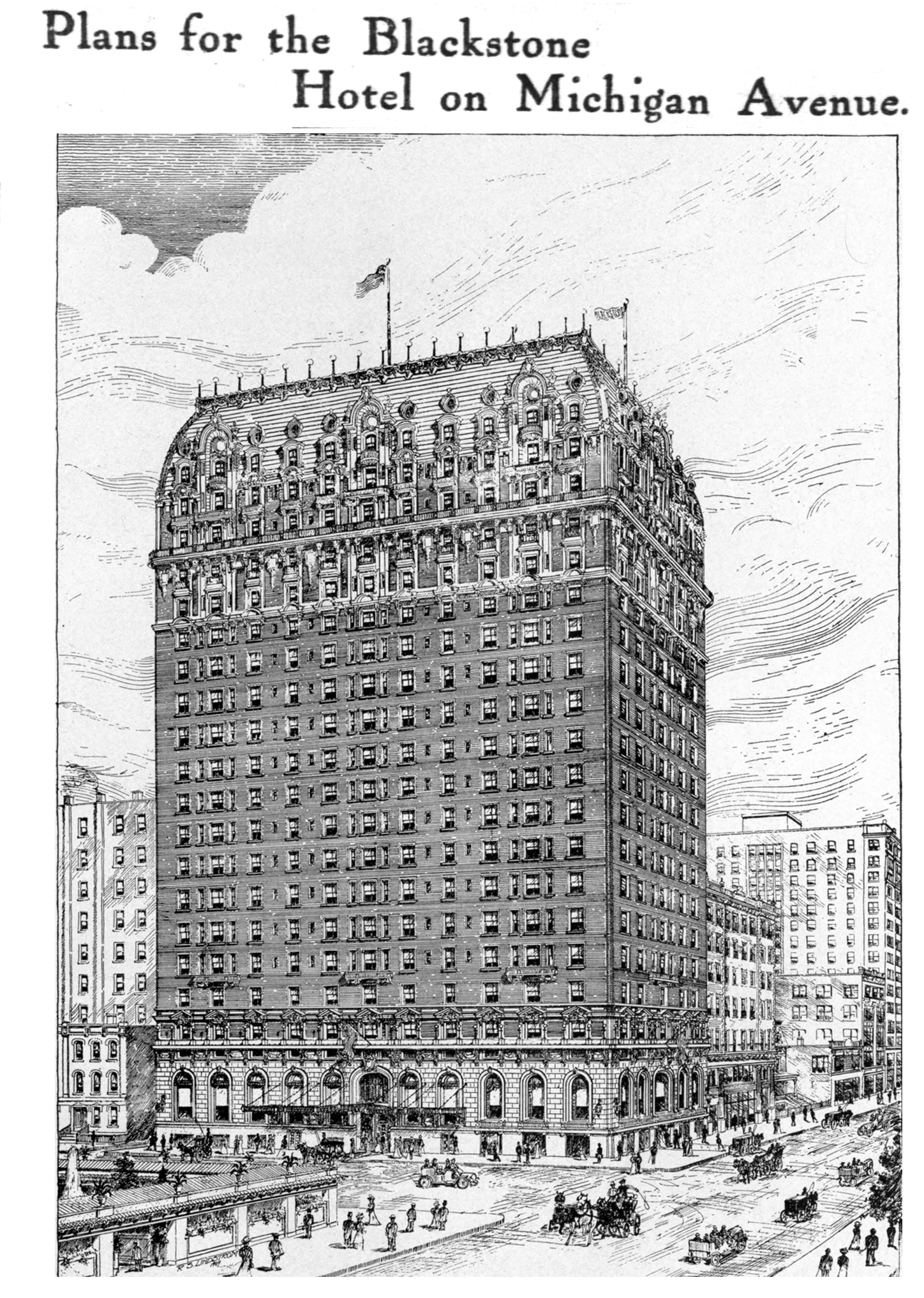 The Blackstone hotel, which will be erected on the northwest corner of Michigan boulevard and Hubbard place, promised to set a new record in hotel construction, according to the completed drawings for the street elevation.

The drawings, which were given yesterday by the architects, Marshall & Fox, show that much study has been given to the production of a facade which, while meeting commercial requirements, will retain a large measure of the artistic—missing from many modern buildings.

To the height of three stories the treatment will be in polished pink Milford granite, and for the balance of the facade in warm shades of pressed brick and terra cotta. The frieze cornice, dormers, and balustrades will be of terra cotta, the whole crowned by a mansard surfaced with green tile.

The plans provide for 469 guest chambers. The main restaurant will be on the Michigan boulevard front, overlooking the lake, a second cafe on the west, with the office rotunda in the center. The third floor will be devoted to banquet and private dining rooms and a library and assembly room. Under the office will be the club floor, devoted entirely to men. A unique roof and palm garden will add to the attractions. It is expected that ground will be broken by September.

The land deal in connection with the erection of the proposed Blackstone Theater, just west of the Blackstone Hotel, in Hubbard court, is more extensive than the ground to he covered by the theater itself, which, has a frontage of 80 feet on Hubbard court, with a depth of 120. The land embraced in the deal has a frontage of 120 feet on Wabash avenue, at the northwest corner of Hubbard court, with a depth of 172 feet on the latter, which has been leased by the Studebaker Brothers Manufacturing Company for a term of 143 years and 6 months from July 1, 1909, to a corporation controlled by Tracy C. and John B. Drake, leading figures in the control and management of the Blackstone Hotel.

Ultimately it is expected that the annex of the Blackstone Hotel, which is located just across the alley from this property, will be erected on the corner, but for the time being the lessees will improve only the east eighty feet of the property with what is said will he the finest theater in America at a cost of $250,000, in accordance with plans prepared by Marshall & Fox. A lease of the theater has already been made to Klaw & Erlanger, Charles Frohman and Harry J. Powers, through their counsel. Levy Mayer. The theater will be under the management of Mr. Powers. It will be opened about September 1, 1910. The transaction was negotiated by Rounds & Wetten.

The ground is owned in fee simple by the Studebaker Brothers Manufacturing Company with the exception of the corner, 40×100 feet, which is owned by Robert G. Dwen, but is under lease to the Studebakers for a term of ninety-nine years with a rental option on a like period, at an annual rental of $7,200 until November 1, 1916. and thereafter at a reduced rental of $6,000 per annum. 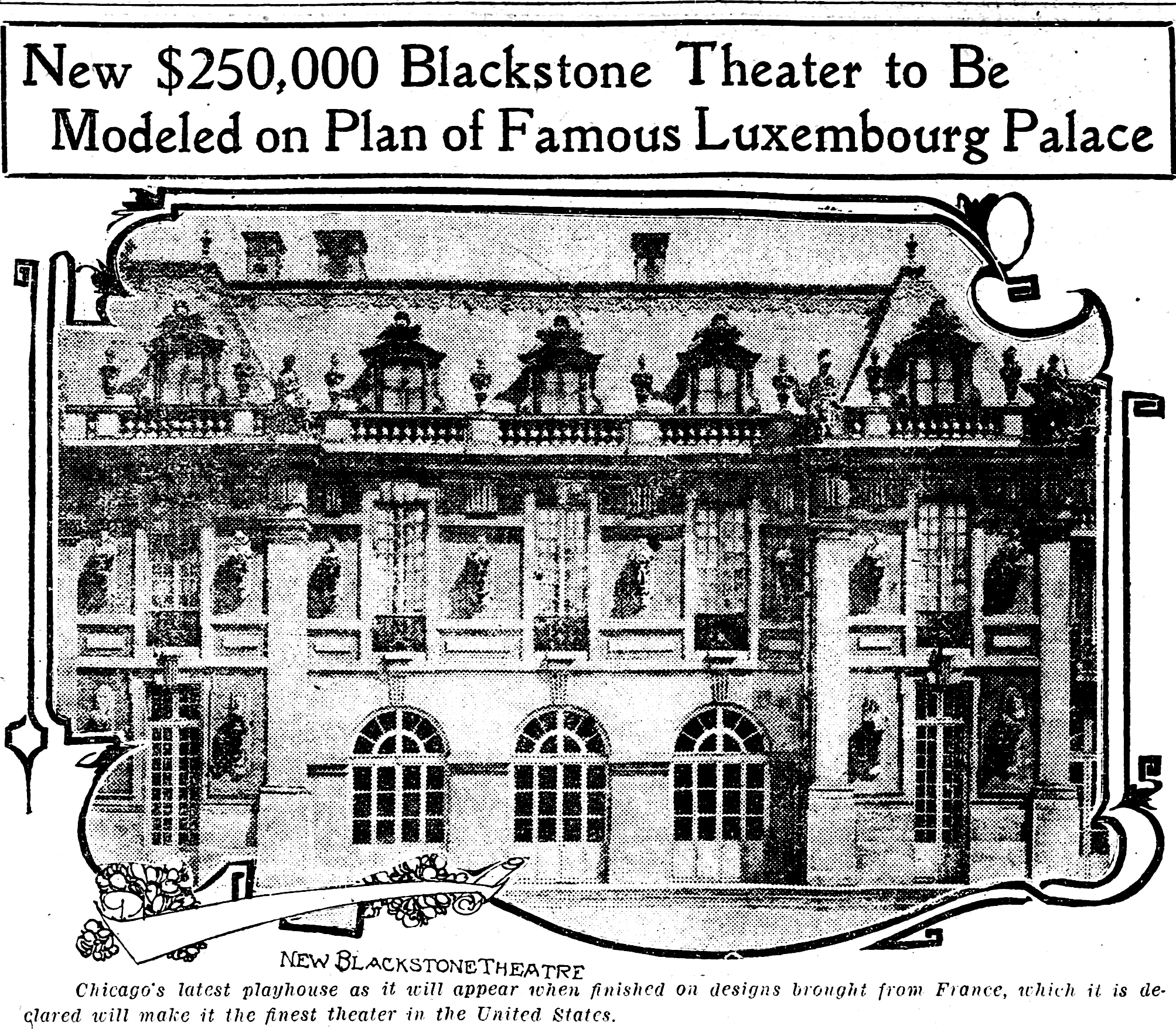 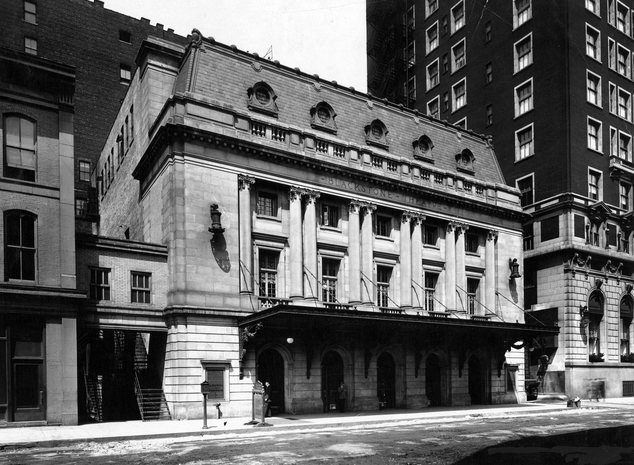 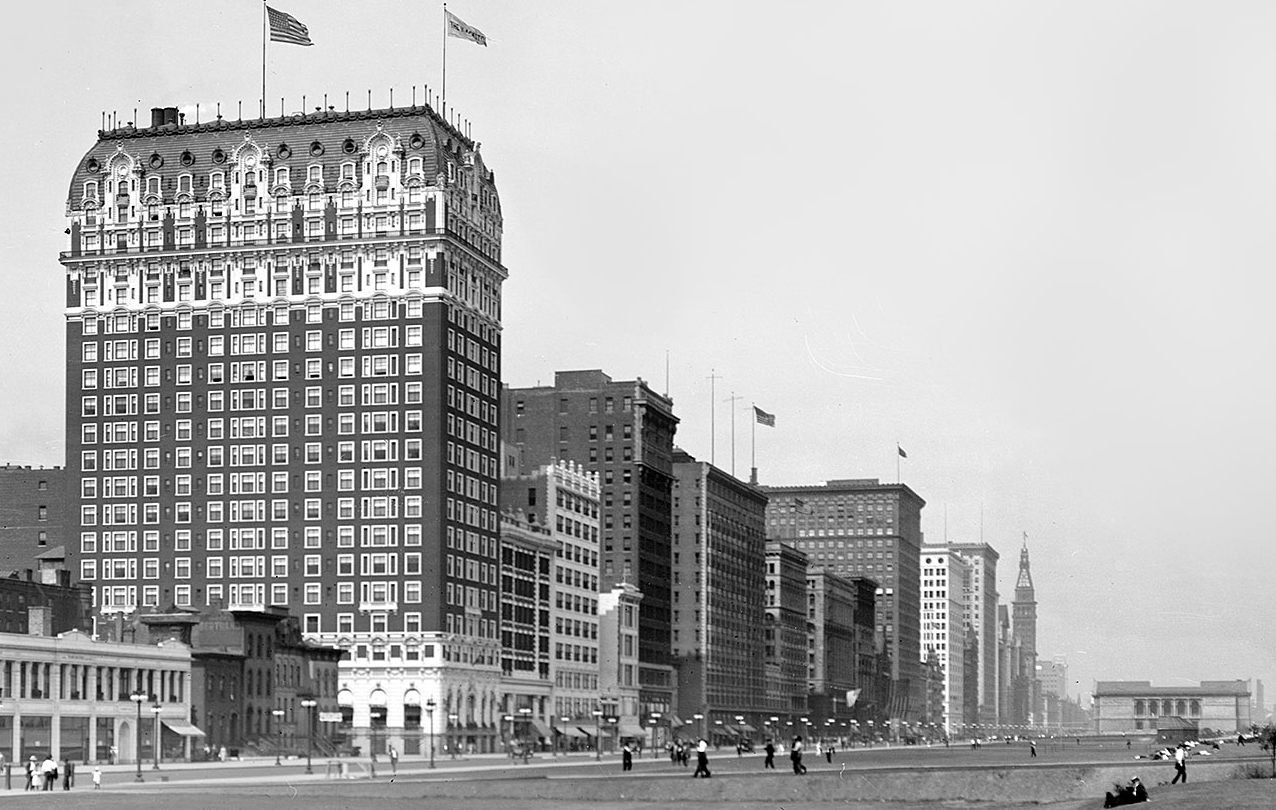 Blackstone Theater
Arno B. Reincke
Circa 1916