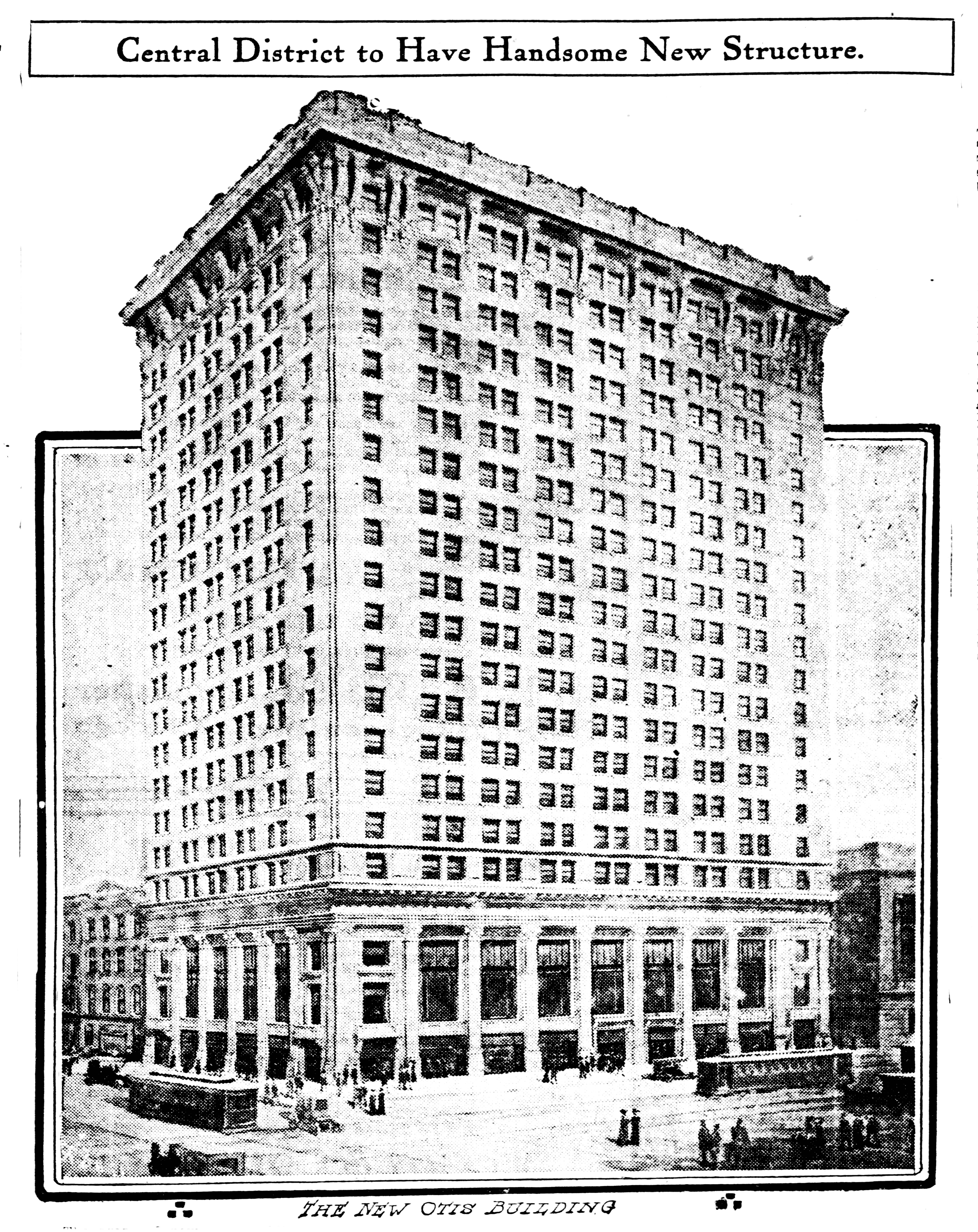 The proposed new Otis building at the southwest corner of La Salle and Madison streets, for which Holabird street & Roche have prepared plans, will be one of the handsomest structures in the central district. Its frontage of 190 feet on La Salle street and 111 feet on Madison street will give it one of the largest ground areas of any building in the loop district, which will be emphasized by the great height of the building, twenty-one stories. Work is expected to begin May 1, and the cost will approximate $3,000,000.

This building is one of Chicagos latest skyscrapers, being 16 stories high, and is situated at the corner of La Salle and Madison Streets. It is considered by architects to be one of the finest office buildings in the world as the entrance and all the corridors are lined with imported Italian statuary marble. It is the home of the Chicago Association of Commerce. It was erected at an approximate cost of $2,500,000.

Title to the ground at the southwest corner of La Salle and Madison streets, on which the twenty-story Otis building is to be erected, has been vested in Carrie Otis Meacham, Philip A. Otis and Seymour Morris, senior trustees for an organization to be known as the Otis Trust agreement. The building will occupy a frontage of 89 feet on La Salle street by 110 feet on Madison, and its ownership is divided into 234 shares, as follows: Philo A. Otis and WalterJ. Otis, each thirty-nine shares; Carrie O. Meacham, Jennie E. Counselman and Lydia A. Hayward, each thirty-six shares, and Helen K. Hubbard, Louis Otis and Otis H. Williams, each sixteen shares. 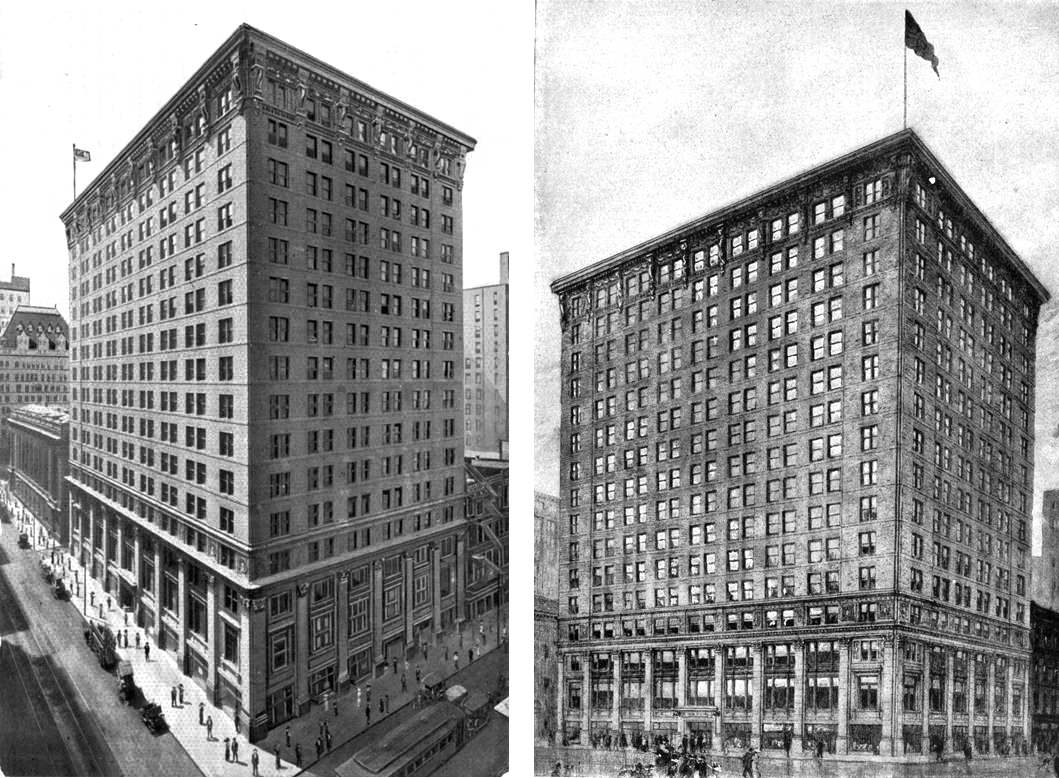 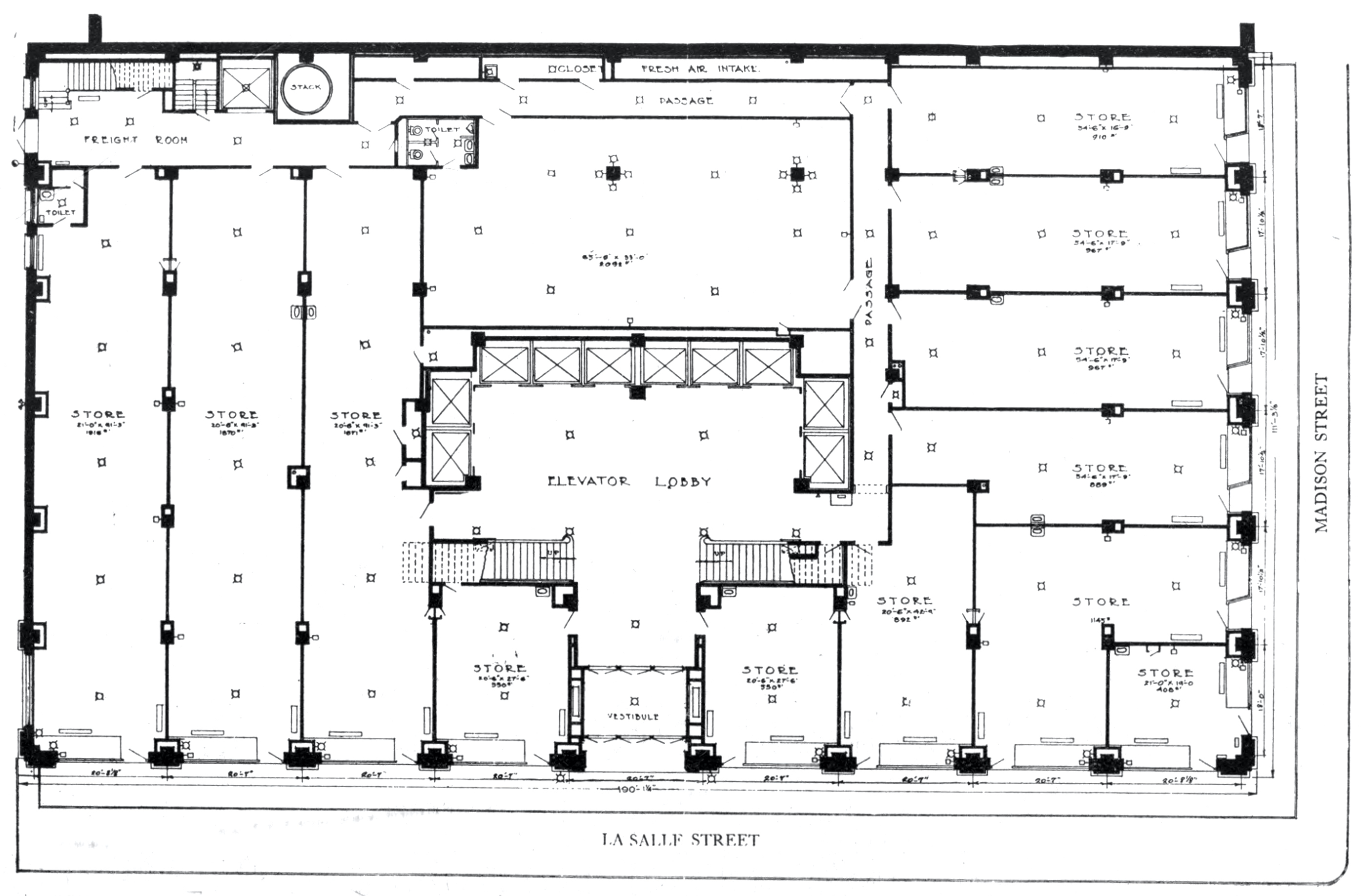 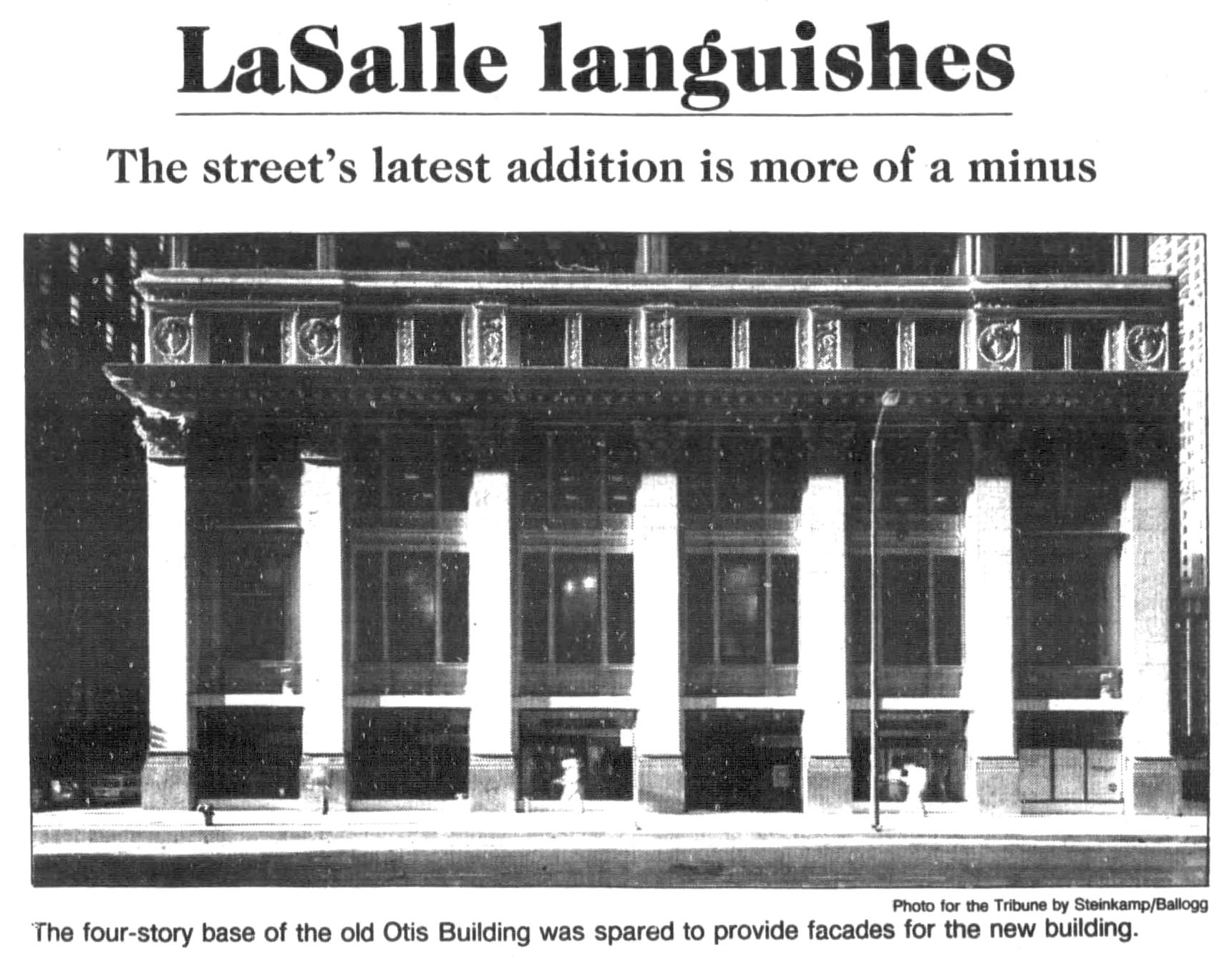 No truly great building has been constructed on downtown LaSalle Street for more than 50 years, although more than a few good ones (including Louis Sullivan`s magnificent Chicago Stock Exchange) have been torn down.

It must also be observed that the most prominently sited LaSalle Street landmark-the 1929 Board of Trade Building-has been deformed by exterior remodeling and ugly electronic equipment bolted to the roof.

Still, architects keep trying their hand in the famous financial canyon, and among the latest to turn in a performance no better than mediocre are the team of Moriyama & Teshima Planners Ltd. of Toronto and Holabird & Root of Chicago. Their 37-story office building at 10 S. LaSalle St. is not without merit, but it is also demonstrative of some interesting ideas that didn`t quite work.

The most innovative aspect of 10 S. LaSalle is the fact that the architects saved the four-story granite and terra cotta base of the building that formerly stood on the site. A new tower clad in blue aluminum and blue-tinted glass rises from the old base-from within it, actually-in a manner that is quite pleasing.

Holabird & Roche, the predecessor firm to Holabird & Root, designed the 13-story Otis Building that had stood on the site since 1904. It was first planned to demolish all of the old structure (which was no treasure) to make way for the new building.

Yet the final scheme that retained the Otis base is a good one. One might almost say it was employed rather bravely at a time when the terms “contextualism” and ‘”facadism” have become controversial in debates about architecture.

Very simply, contextual buildings are those that respect the existing design fabric of their environs. A contextual approach to design can be subtle or heavy-handed. It occasionally makes no sense at all, of course, if existing buildings in a neighborhood are an ugly jumble. Some architects who like to make arrogant design statements claim that all contextualism is bunk.

“Facadism” is always used in a pejorative sense. It means saving a section of an historic building, usually a front wall, as a sop to preservationists when the rest of the building is torn down. We haven`t seen much of that in Chicago, mostly because the practice here is to tear down famous buildings completely, without leaving a trace.

In any case, the architects who designed the new 10 S. LaSalle high-rise risked being accused of token contextualism or even outright facadism when they saved the bottom walls of the old Otis Building along LaSalle and Madison Streets. Indeed, perhaps there was some mumbled criticism along those lines that never came to my attention.

An even larger risk, though, was that a new building rising from the old shell simply would not look right. An architect cannot always trust experience, go by the book, or get all of the answers from a computer when he sets out to conceptualize a building. In the end, either a thing looks right or it does not, and as imprecise as that sounds, it is the way some candid architects talk about the design process.

The 10 S. LaSalle gamble paid off in terms of this intangible rightness factor. The old four-story base fits its financial canyon environs in fine fashion and friendly compatability. Specialists also found a way of using the Otis`s original old perimeter caissons to help support the weight of the new building. For this, credit goes to Cohen-Barreto-Marchertas Inc., structural engineers on the project.

It was only when the architects moved beyond the challenge of the base that they got into esthetic trouble.

The most prominent feature of the high-rise is a single vertical strip of bay windows centered on the east wall of the building and running from the 19th floor to the top. Functionally, the windows succeed in providing tenants with fine views up and down LaSalle Street. To the eyes of a pedestrian, however, the strip looks like an indecisive wrinkle on the side of the building. Passersby may conclude it is not primarily ornamental, but neither does it speak precisely of function, as an orthodox rank of bays would do. Ambiguity need not be forbidden in architecture, but this comes closer to gimcrackery.

Much less visually prominent but even more peculiar is the way the architects scooped out a semicircular indentation in the center third of the east wall, from sidewalk level to the top of the seventh story. The esthetic intent was to provide a symbolically transitional open-air space between the old Otis base and the new building. As a practical matter, the scoop-out is almost a freakish device that neither pleases nor informs.

Oddly enough, the design touch at 10 S. LaSalle that has perhaps generated more conversation than anything is the application of piping painted bright green as ornamental trim on the otherwise relentlessly blue office tower. These have been sarcastically referred to by some as “racing stripes.” I find them unoffensive, although I would argue that selection of the point-to-point lines to be ornamented could have been done with more care. The back wall of 10 S. LaSalle was sawtoothed on its north and south sides to increase exposure to daylight in anticipation of the time when a new building would be constructed immediately to the west, at Madison and Wells Streets. That day has already arrived, and a skyscraper designed by Cesar Pelli of New Haven, Conn., has begun rising on the adjoining site.

Some time ago, it appeared that the developer of 10 S. LaSalle, Fidinam USA Inc., might also be the developer of the west site. Against that possibility, the western side of the 10 S. LaSalle lobby is more spacious than the cramped east side and offers the potential of a handy pedestrian connection with its neighbor. As it turned out, another developer is behind the Pelli-designed building, but the original lobby gesture at 10 S. LaSalle was not in vain because the connection is still feasible.

Today, 10 S. LaSalle is more formally known as Manufacturers Hanover Plaza, named for a tenant that occupies five floors in the building. Another large tenant is the Northern Trust Co., whose handsome old 1906 headquarters is next door at 50 S. LaSalle.

And so downtown LaSalle Street still awaits its first genuine architectural triumph since the Depression. One or two of the other older buildings on the street will probably be torn down within the next few years. Perhaps the next architect presented with a tabula rasa will rise fully to the challenge. 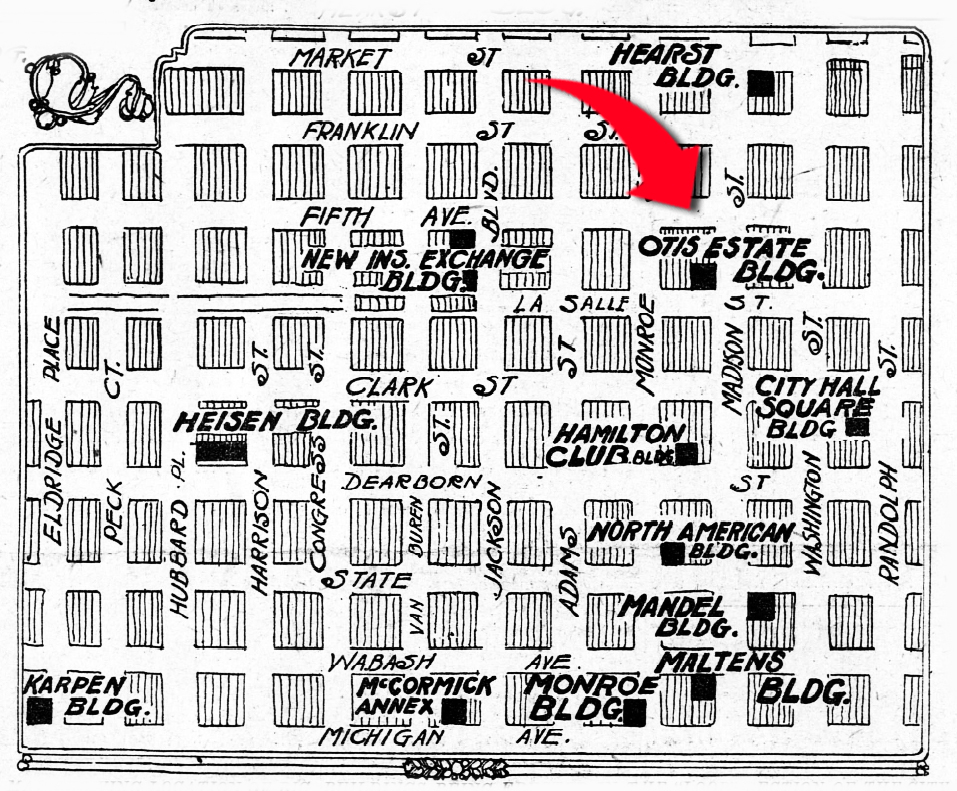