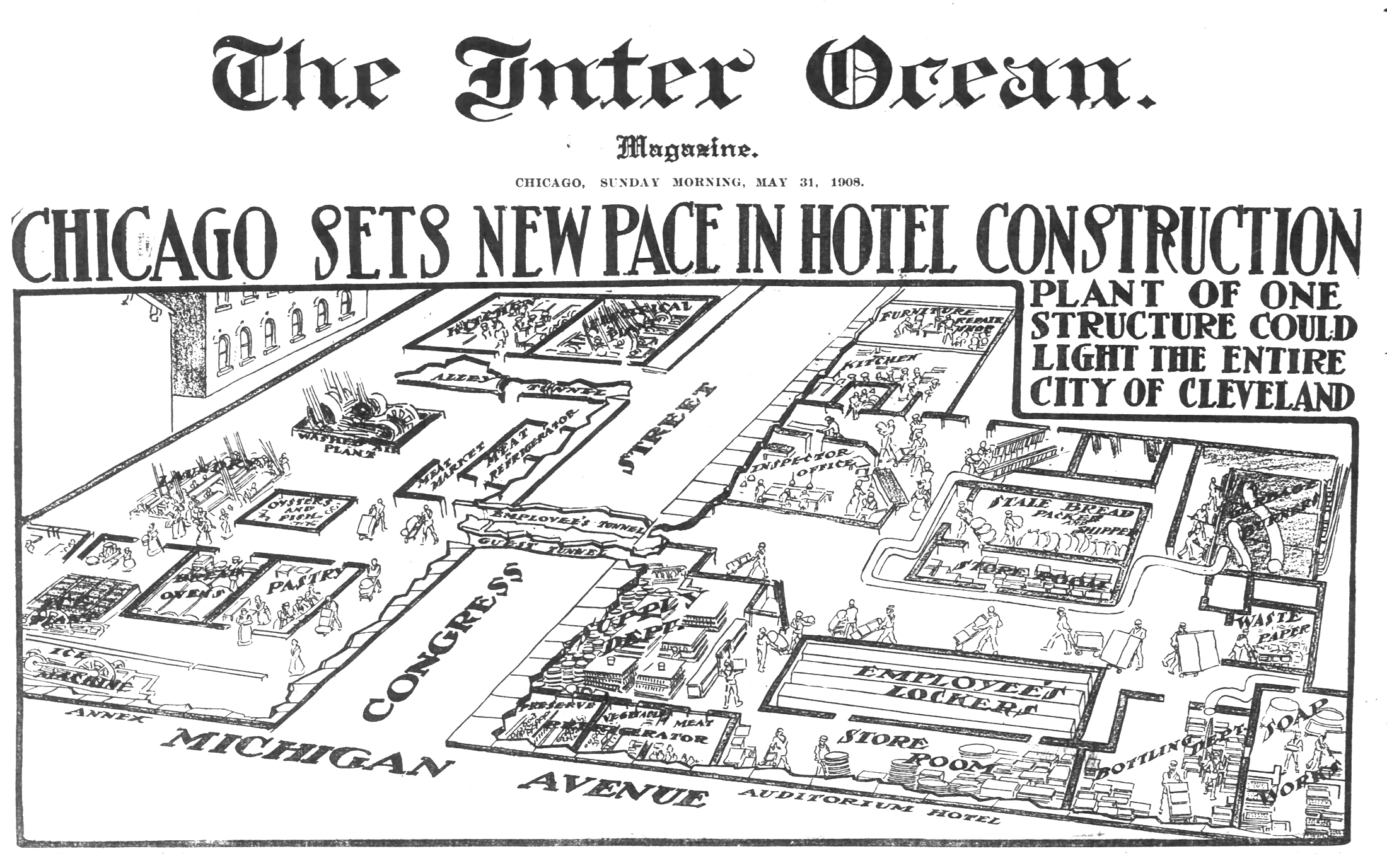 When the big La Salle hotel is completed, the ground for which is already broken at La Salle and Madison streets, Chicago will have the biggest hostelry ever constructed under one contract in the world.

Second only to the La Salle hotel will be The Blackstone, which is to be erected at the corner of Michigan avenue and Hubbard place. The completion of these two mammoth structures, which will be within the next two years, will give Chicago a prestige, as far as hotels are concerned, which will place it in the front rank of the big cities of this country or Europe.

The two structures will represent an investment of appropriately $10,000,000, and will men that the city has taken the most important stride in the way of hotel construction since the days when the building of the Auditorium and subsequently the Annex set the pace for the cities of the United State some twenty years ago.

Few people have any idea of the immensity of the enterprise which is required for the conduct of a big hotel. For instance, the lighting plant alone which supplies the Auditorium, the Annex and one or two of the neighboring buildings possesses a sufficient capacity to supply all the lighting for the city of Cleveland. The people who whirl by the mammoth structure on Michigan avenue little realize that almost beneath the wheels of their automobiles lies a municipality which manufactures its own light, conducts a furniture factory, a laundry, a printing establishment, a silver plating works, in fact, everything necessary to the comfort of its 1,400 guests. The guests of the establishment have but a slight idea of the work required and the magnitude of the organization necessary to minister to their comforts. Day and night the work goes on; as fast as one force of employes gets through another shift is requisitioned to take their places. A trip through such an establishment is a revelation in itself. One could easily get lost in the mazes beneath the big establishment, but there are many ways out which one would eventually run across. 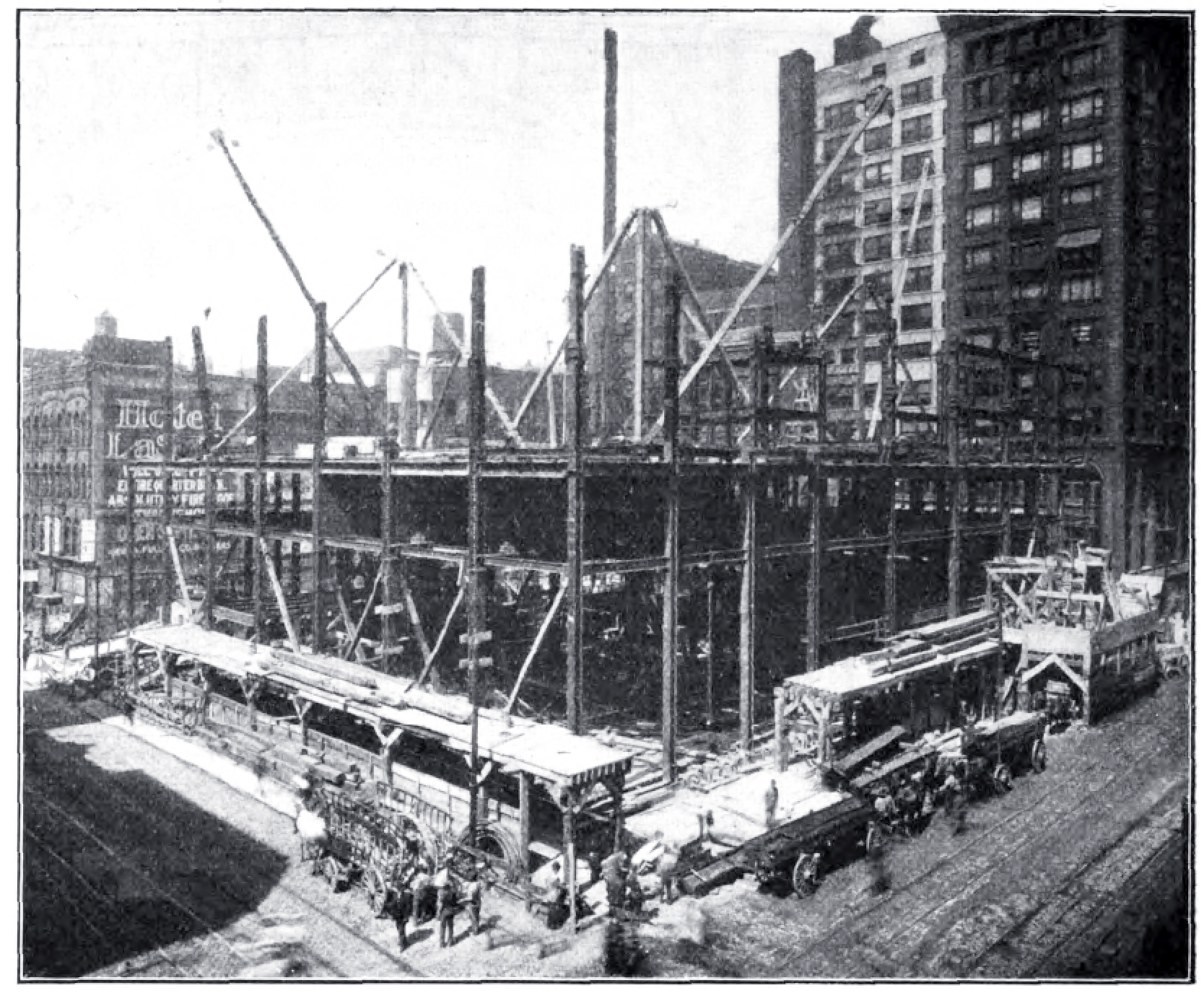 The starting point of interest is the big establishment when one starts out seriously to take in the sights of this municipality is the soap manufacturing plant. Every scrap from the tables which cannot be used is collected, sent down to the plant and every day 1,500 pounds of absolutely pure soap is turned out. In addition a ton a week is purchased from a big local plant. It is the policy of the management to make use of all the products to be found in the building, consequently some 6,000 pounds of waste paper a week is collected and sold. Anything that is absolutely unusable goes into the garbage plant and is burned, the heat generated therefrom being made use of in the establishment. Crossing from the garbage and soap-making plant one is conducted into the carbonating plant, where 3,000 bottles of charged water and pop are turned out every day. All the waste bread from the tables is gathered into large sacks and is turned over to a farmer, who contracts for it to be used as feed for chickens.

“We are not obliged to go outside of the building for anything,” remarked one of the officials of the company, “as it is the aim to concentrate everything right here. Of course all meats, groceries, etc., are brought in day by day, and are kept in their respective storerooms. There are something like 1,400 employes here, an average of one to every guest. This includes kitchen help, cooks, bell boys, clerks, laundressesm etc.”

Through a maze of storehouses the scenes beneath the big structure resembled a vast hive of industry. A thoroughly equipped laundry in full operation, a furniture repair shop, where fifteen men were busy renewing and repairing beds, and other paraphernalia of the different suites which had succumbed to the general wear and tear of the business, and a locksmith’s shop, where keys are made and fitted for the rooms when guests occasionally forget to turn them in on their departure, were some of the places of interest. In addition were a fully equipped tailoring shop, an ice plant, and an electric lighting plant of sufficient capacity to supply all the electric lights of the city of Cleveland. The electric lighting plant furnished the lights for the Studebaker building, the Fine Arts building, the Auditorium theater, and the Auditorium association.

The new hotel which is to be built for the Drake Hotel company on the site of the old Blackstone residence, and to be managed by John B. and Tracy C. Drake, it is said, will eclipse anything which has so far been produced in hotel building line. It will cost in the vicinity of $2,300,000.

To the height of three stories the treatment will be in polished pink Milford granite, and for the balancer of the facade in warm shades of pressed brick and terra cotta, matching the granite in texture and tint. The frieze, cornice, dormers, and balustrades will be of terra cotta, the whole crowned by a mansard surfaced with green tile. The plans provide for 469 guest chambers, including fifty-one apartment suites, each room excepting the parlors and private dining-rooms to have an outside bath. The main restaurant will be on the Michigan boulevard front, overlooking the lake; a second cafe on the west, with the office rotunda in the center. The third floor will be entirely devoted to banquet and private dining rooms and a magnificent library and assembly room. Under the office will be the club floor, devoted entirely to men, and on the order of a high class city club. The hotel will be opened for business Oct. q, 1909, and its managers promise a revival of the Drake game dinners for which the Grand Pacific was famous under the management of the late John R. Drake. Marshall & Fox are the architects.

Chicago’s new hotel at La Salle and Madison streets will be the largest ever constructed under an original contract. Not only will it be the largest, but it will outrank in equipment and furnishings any hotel in Europe or America. It will be twenty-four stories in height, twenty-two above and two below the street level, and will contain in all 1,172 rooms. The plans were prepared by Holabird & Roche.

The contract for the erection of the building has been let to the George A. Fuller company at an estimated cost of $3,500,000.

The building will cover a full quarter of a block. The La Salle street side will extend from the northwest corner of Madison street north to Calhoun place, a distance of 178 feet. The Madison street frontage will measure 162½ feet. The height of the building above the street level will be 260 feet, the extreme limit allowed by the building ordinance. The steel columns will rest on 105 concrete caissons, which are to be carried 110 feet below the surface line to solid rock, making the building one rigid structure, measuring 370 feet in height from the foundations to the roof. It will contain over 7,500,000 cubic feet of space. 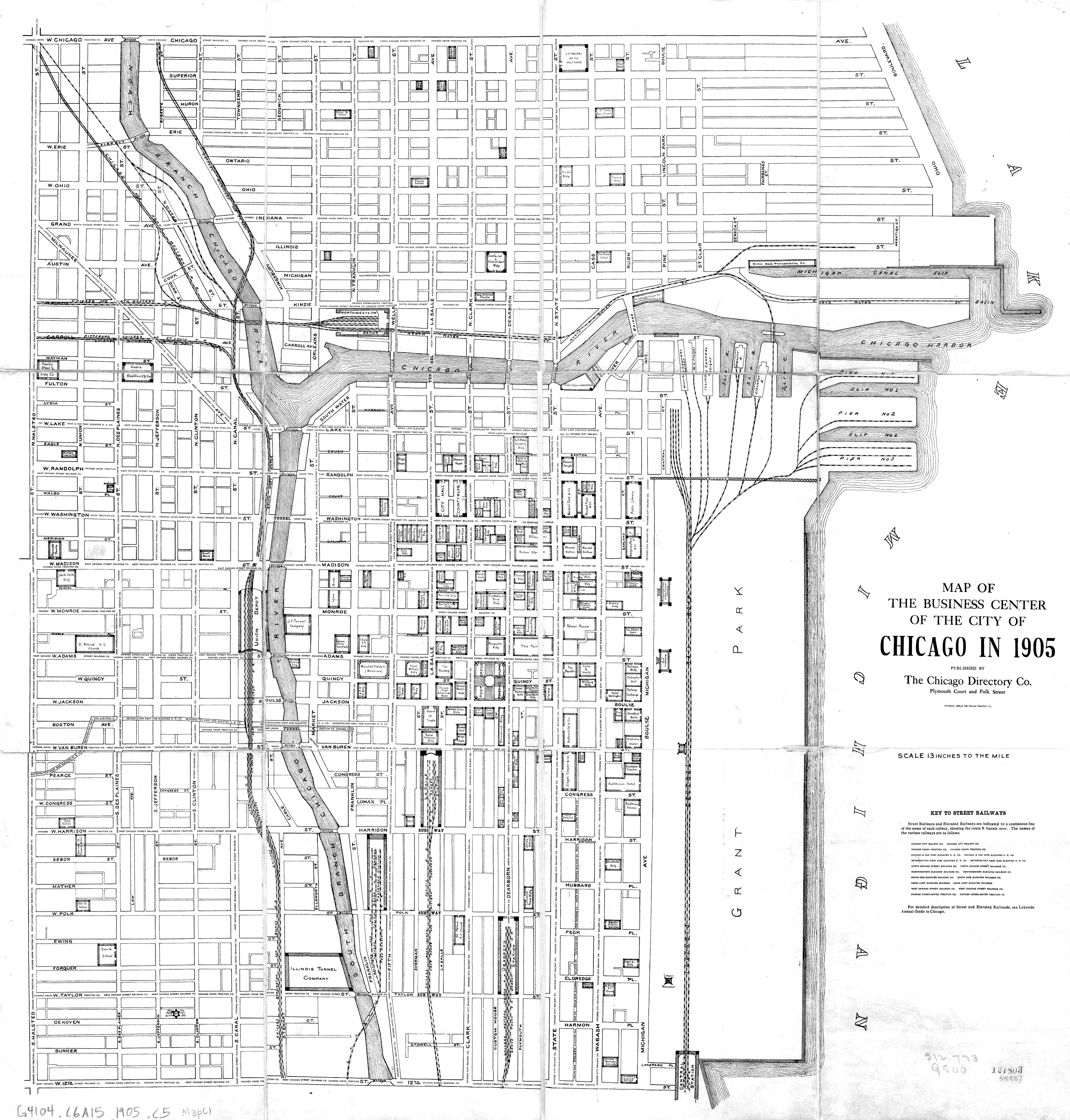 Map of the business center of the City of Chicago in 1905.
Chicago Directory Company.

There will be no stores in Hotel La Salle. The first floor will be devoted exclusively to the uses of the patrons of the hotels. At the corner of the streets will be the main dining room, 80×50 feet in floor dimensions, and twenty-five feet in height of ceiling, without a single pillar or column to mar its beauty. This room will be furnished in the most sumptuous style of the Louis XIV period.

On the Madison street side of the first floor, opening from the street entrance, will be a magnificent palmroom done entirely in marble, stone, and mosaic. Located in the center of the main floor will be the lobby. It will be 100 feet long, 76 feet wide, and 30 feet in height, finished in marble, Circassian walnut, and bronze. On either side of the La Salle street entrance will be reception and writing-rooms for ladies and gentlemen.

All the floors from the second to the nineteenth will be devoted to sleeping-rooms. There are to be sixty-two guest rooms on each floor, many arranged en suite, and nearly all with private bath. Two-thirds of the sleeping apartments are outside rooms, and those on the court overlook an area wider than an ordinary city street. Every room will have running water. On the nineteenth floor will be two handsome banquet halls or ball rooms.

The hotel will be built, owned, and operated by the Hotel La Salle company, an Illinois corporation, with a capital stock of $3,000,000, the stock of which is owned by Chicago and New York capitalists and business men.